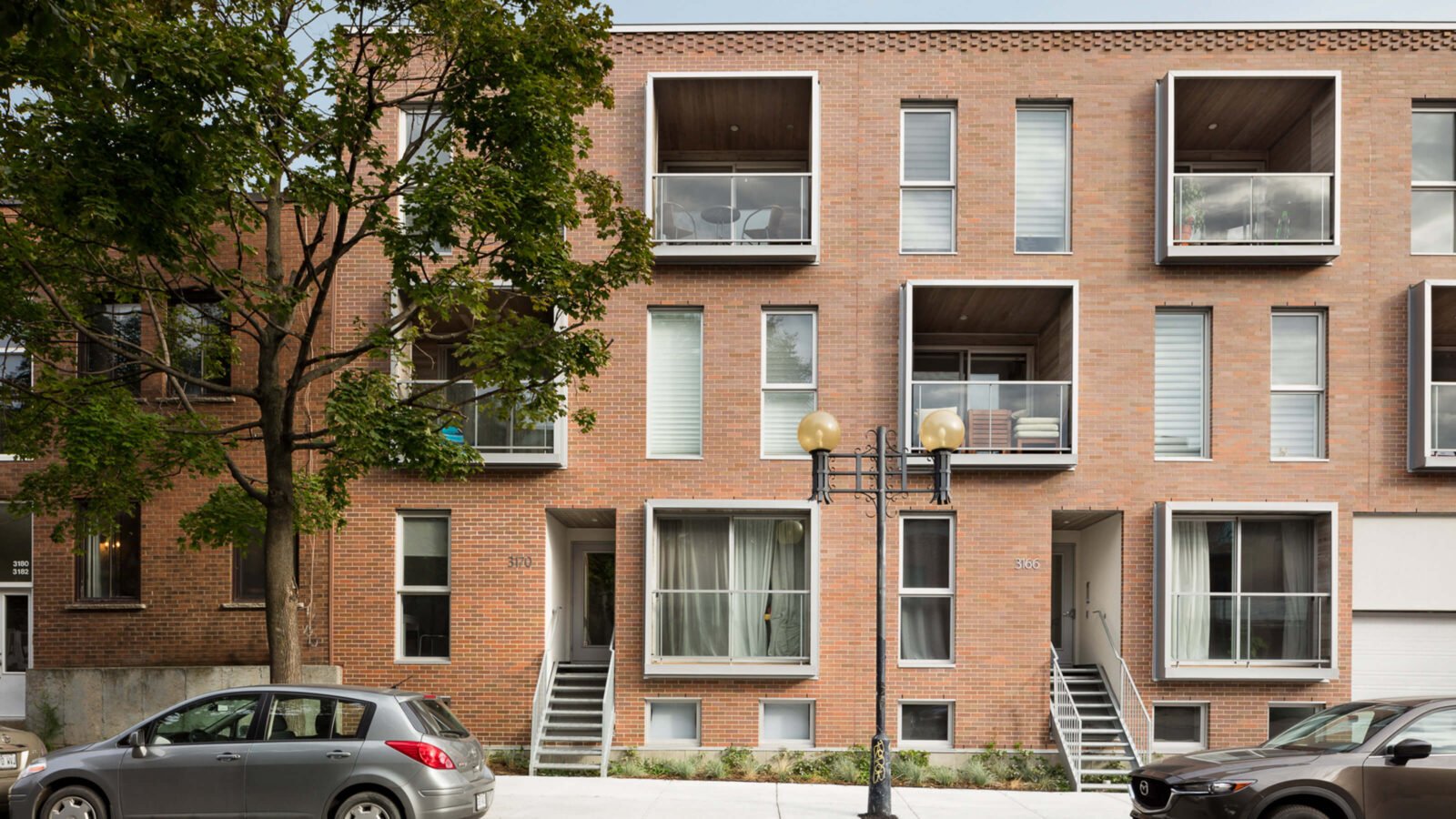 In the heart of Montreal, the 17-unit building Le Jardinier introduces gentle density – and a surprisingly vibrant green space – to the city’s evolving urban context.

Past the Gay Village, the Jacques Cartier Bridge, and the train tracks, the legendary vibrancy of Montreal’s Saint Catherine Street gives way to a quieter residential context. Here, in the unassuming Hochelaga-Maisonneuve neighbourhood, Le Jardinier by ADHOC architectes offers an elegant infusion of “missing-middle” housing that introduces deceptively substantial density while retaining the intimate scale of its surroundings. 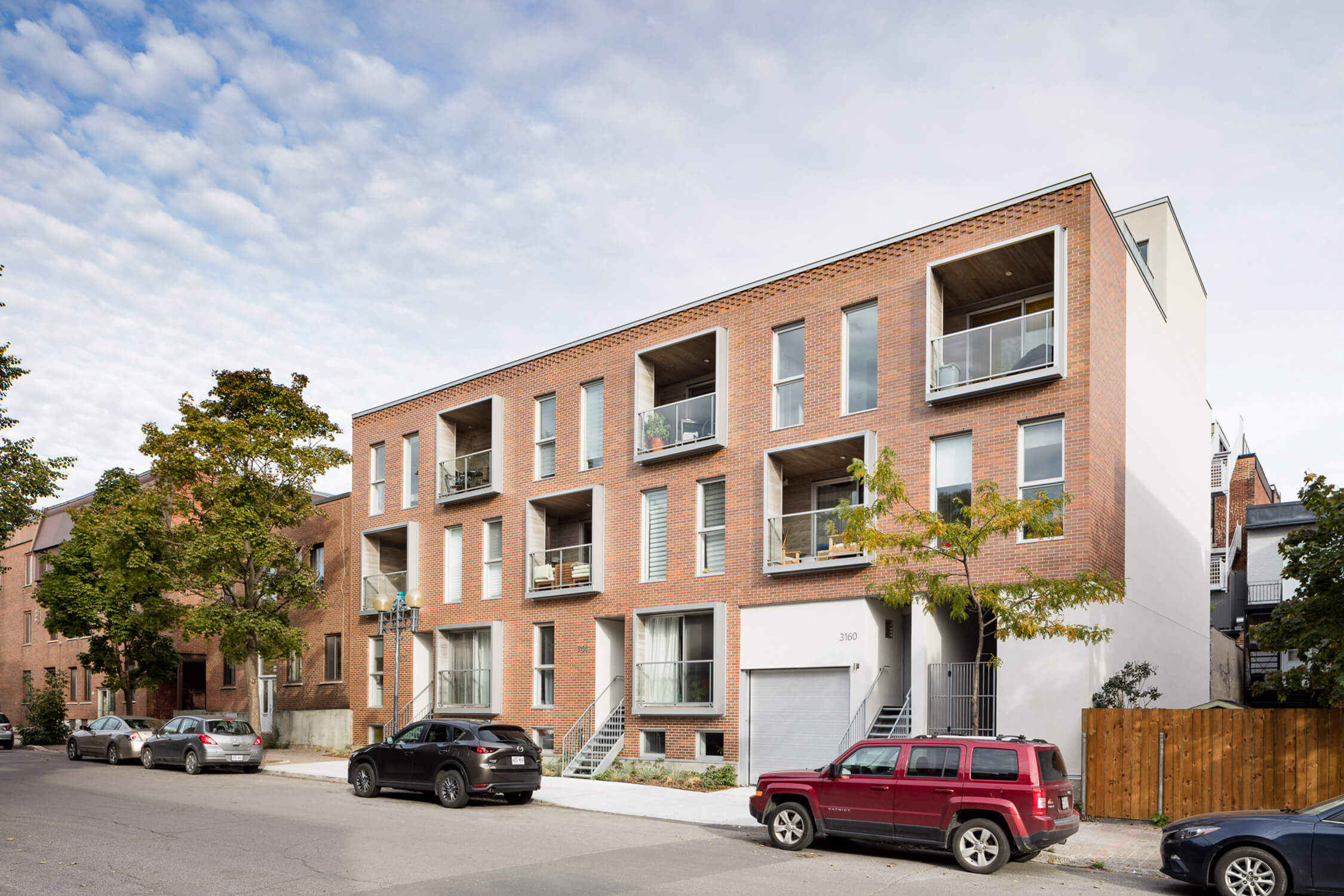 Situated a block north of Saint Catherine, the 17-unit development meets de Rouville Street with a three-storey brick frontage. A diagonal interplay of deep-inset loggia balconies punctuates the façade, giving the building a push-pull rhythm that subtly delineates the street level into a series of intimate townhouse-style frontages. From the street, ADHOC’s design embodies a contextual sensitivity, complete with a modern cornice of inset bricks that hints at the flourishes of Montreal’s older homes. 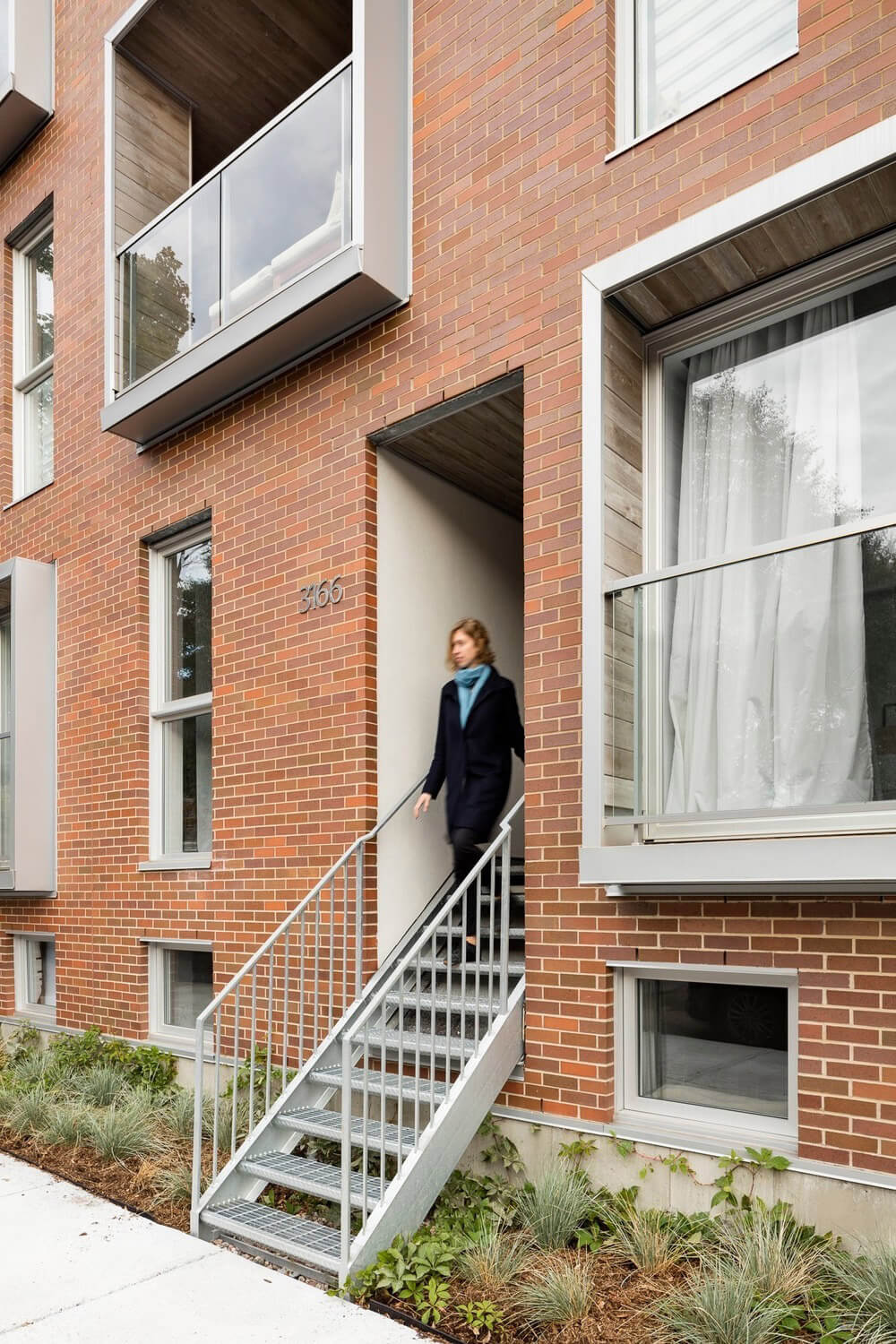 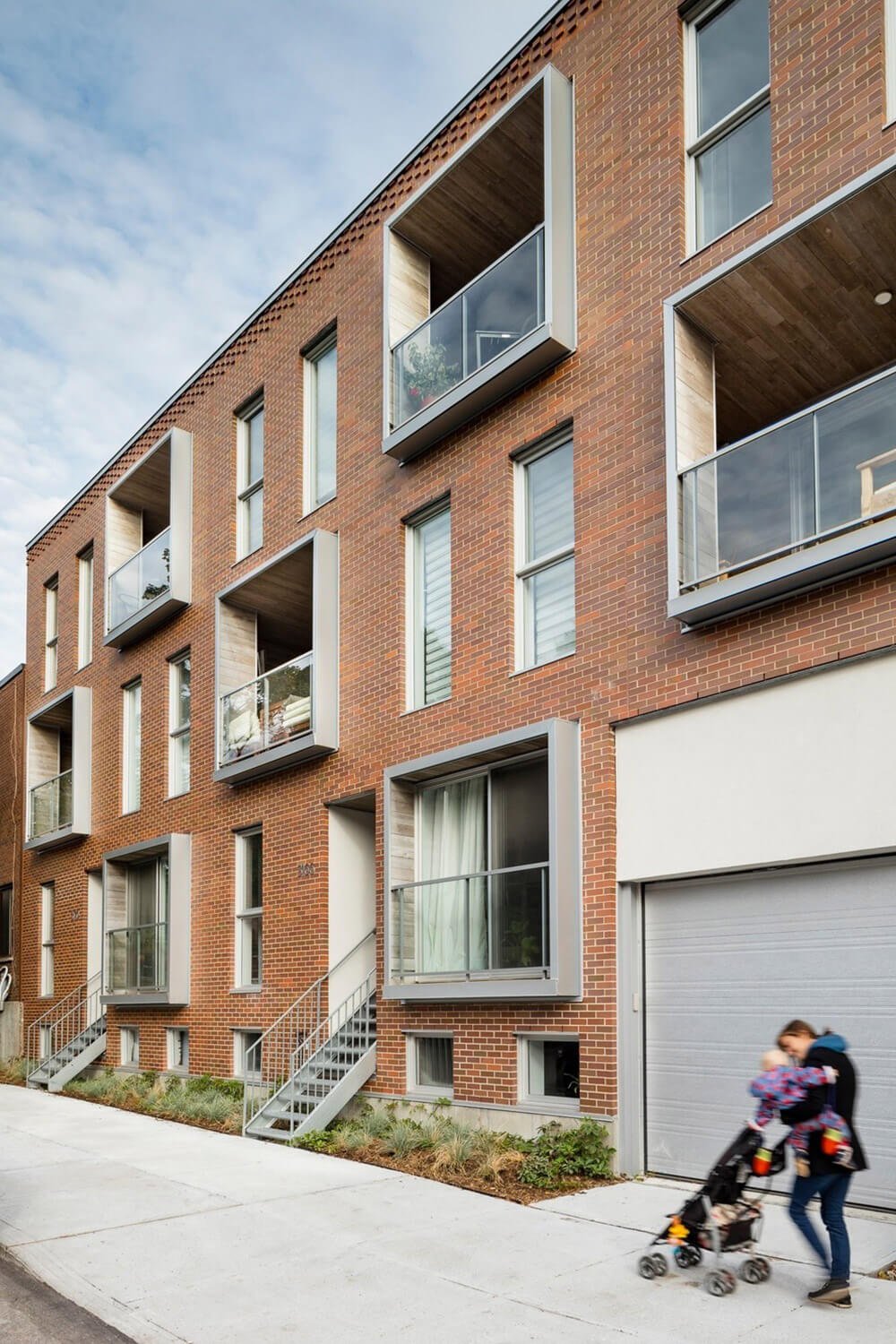 The building’s modest street-level presence is met by a dynamic inner courtyard, organized around the communal garden for which the project is named. Providing a community-building amenity, the courtyard’s presence also gives each home a second exposure. With windows facing both the street and the garden, the units remain light-filled despite their relatively narrow configurations. Replicating the street-side rhythm of loggias, quieter outdoor rooms also face the garden. Adding a touch of warmth and texture, wood cladding frames the loggias and terraces, as well as parts of the building envelope.

The courtyard also provides a fire exit for the neighbouring property, gracefully resolving a potentially complex site plan challenge. Through a simple intervention, the architects have introduced an open space that creates a pathway to the street for neighbours, while giving residents at Le Jardinier exposure to natural light, as well as a sociable – and healthy – shared space. Sadly, the preponderance of staircases, which provide access to unit entrances from both sides of the building, means that Le Jardinier is not fully accessible. 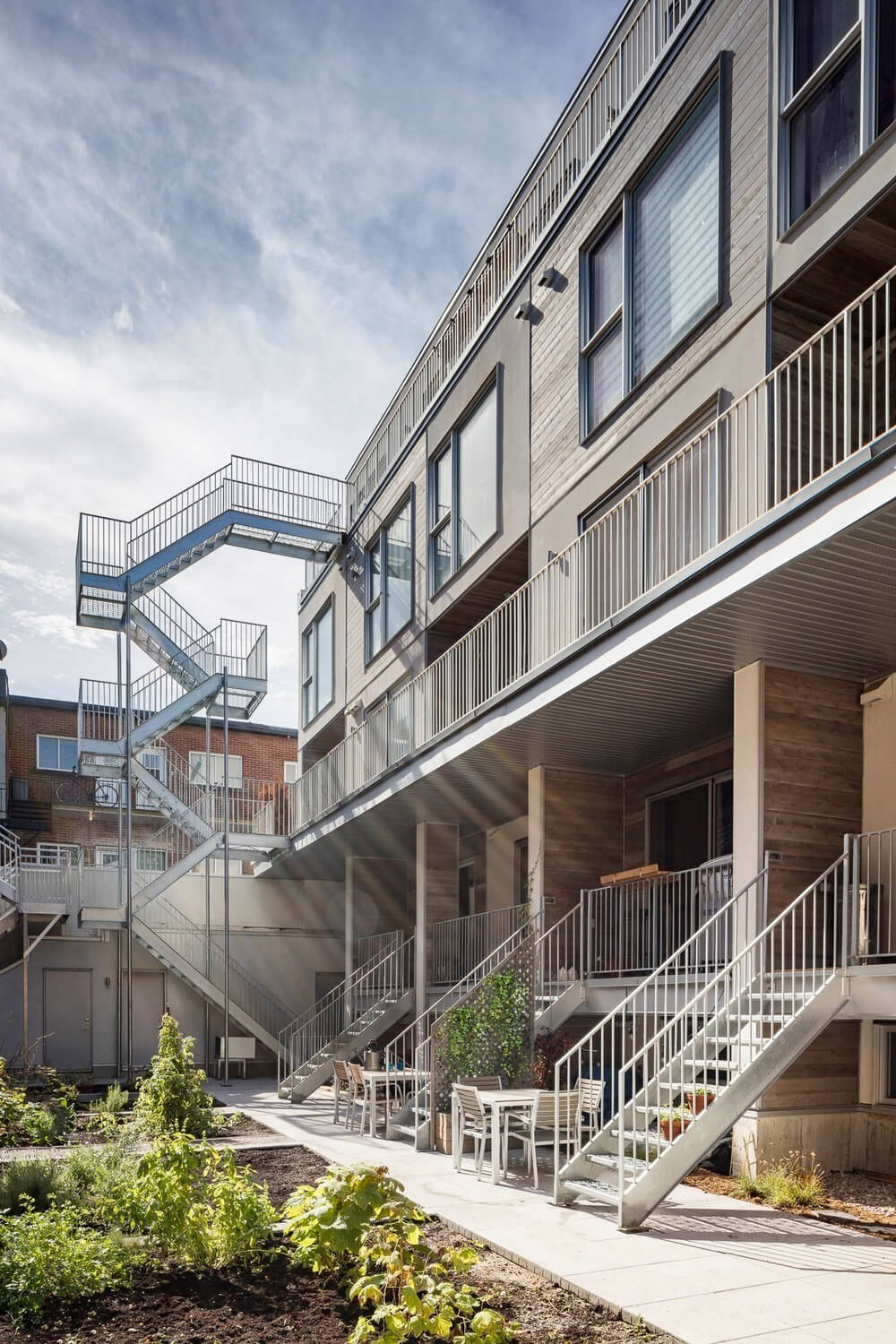 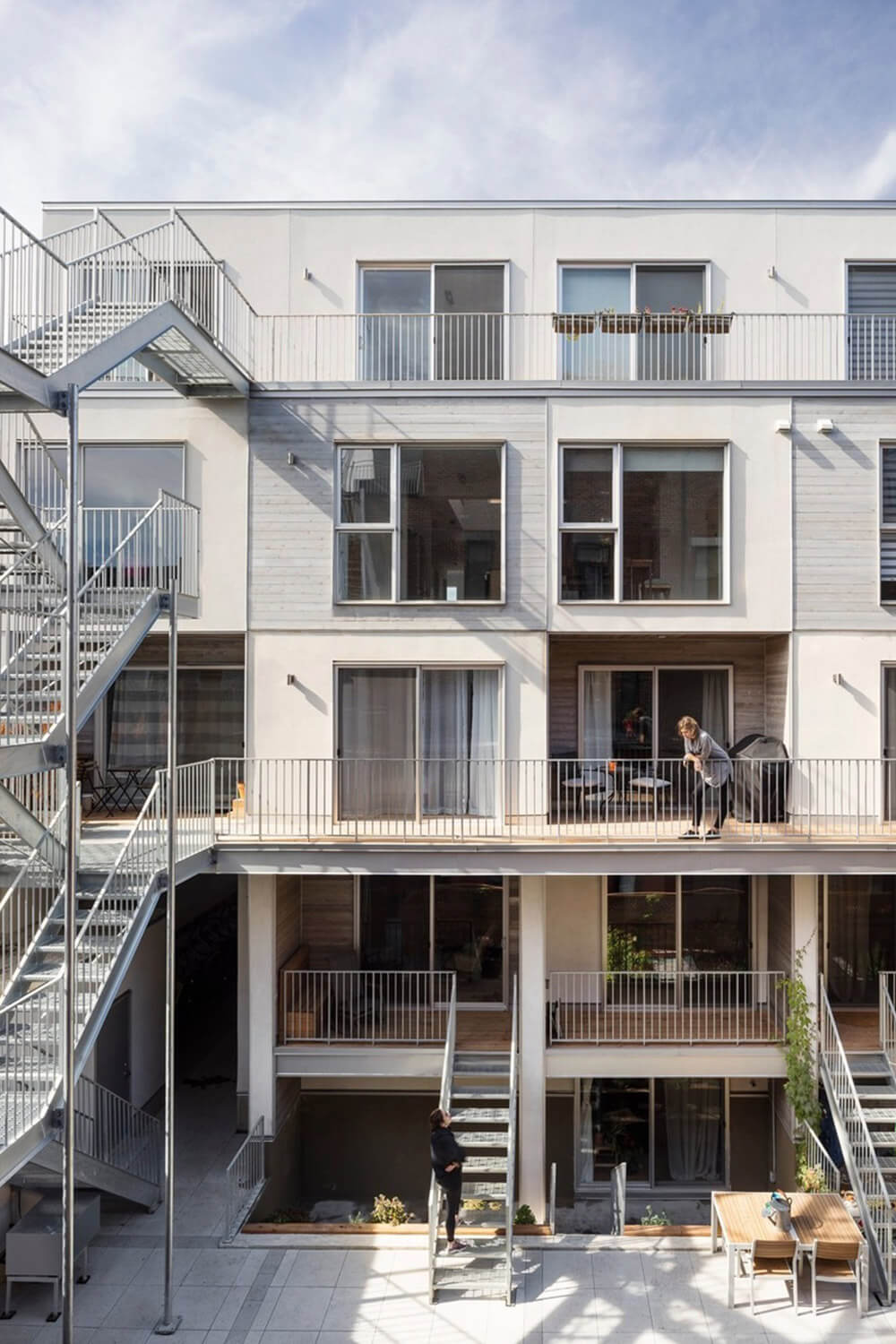 Le Jardinier introduces a rare 21st-century combination of outdoor space and gentle density on a constrained site previously occupied by a single-storey garage. Its modest intensification makes it an outlier in a North American development landscape dominated by soaring glass towers and bulky, block-long mid-rises. (It’s not the missing middle for nothing). Yet, the same qualities that make ADHOC’s approach uncommon to many major North American cities already characterize much of Montreal’s built form. 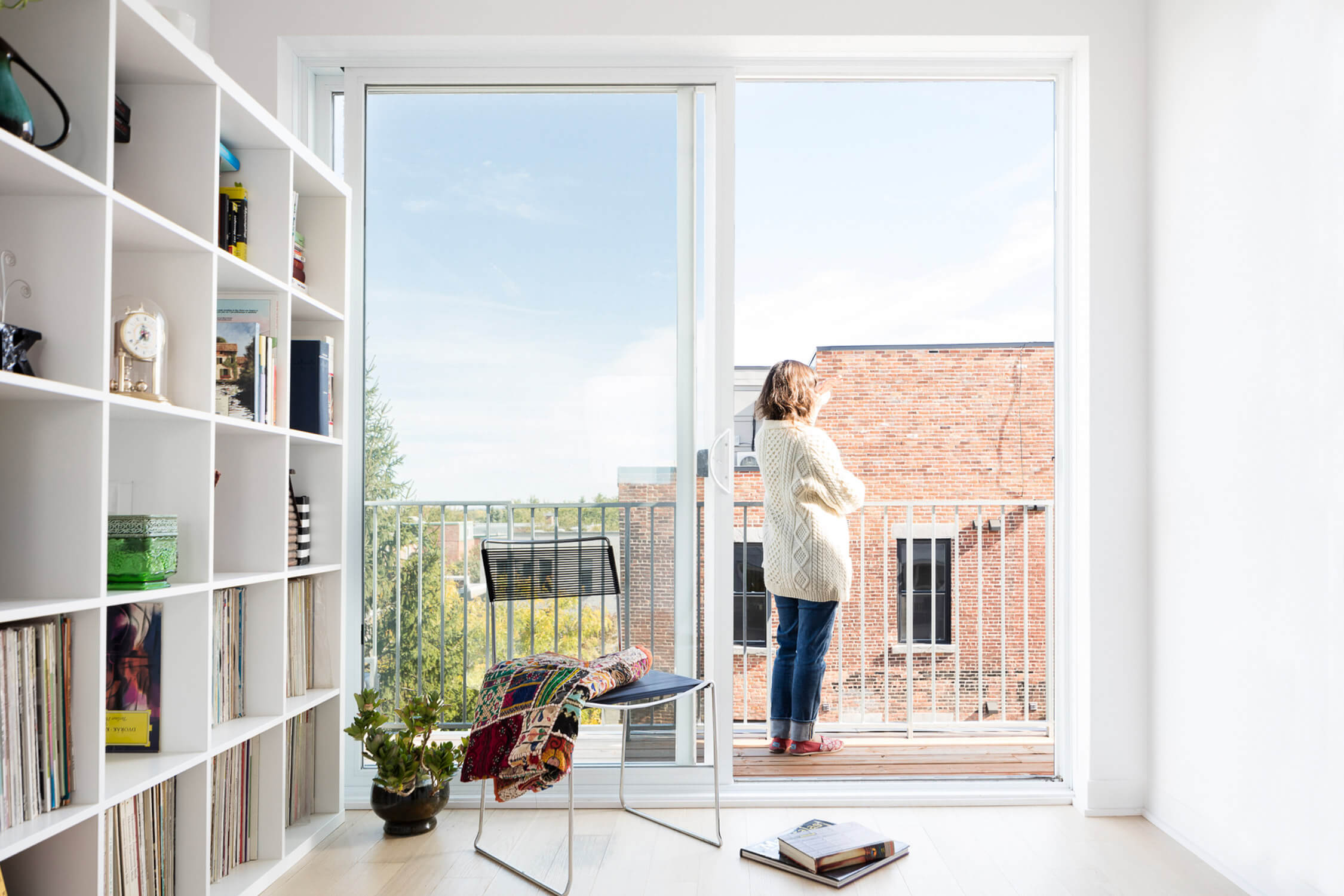 As one of the rare cities whose urban character largely predates the automobile, Montreal has predicated its built fabric on walkability and transit access. The city’s older neighbourhoods – many of which pack in well over 10,000 people per kilometre – are among the densest on the continent thanks to their wealth of row houses and small apartment buildings.

While development hotspots like Seattle and Toronto are increasing their populations through a concentrated influx of high-rise towers, central Montreal retains density through its old — and new – communities of walk-ups and apartments. The combination of outdoor spaces and multi-bedroom units also replicates many of the qualities of a detached home, catering to urban families which tend to be underserved by larger developments. 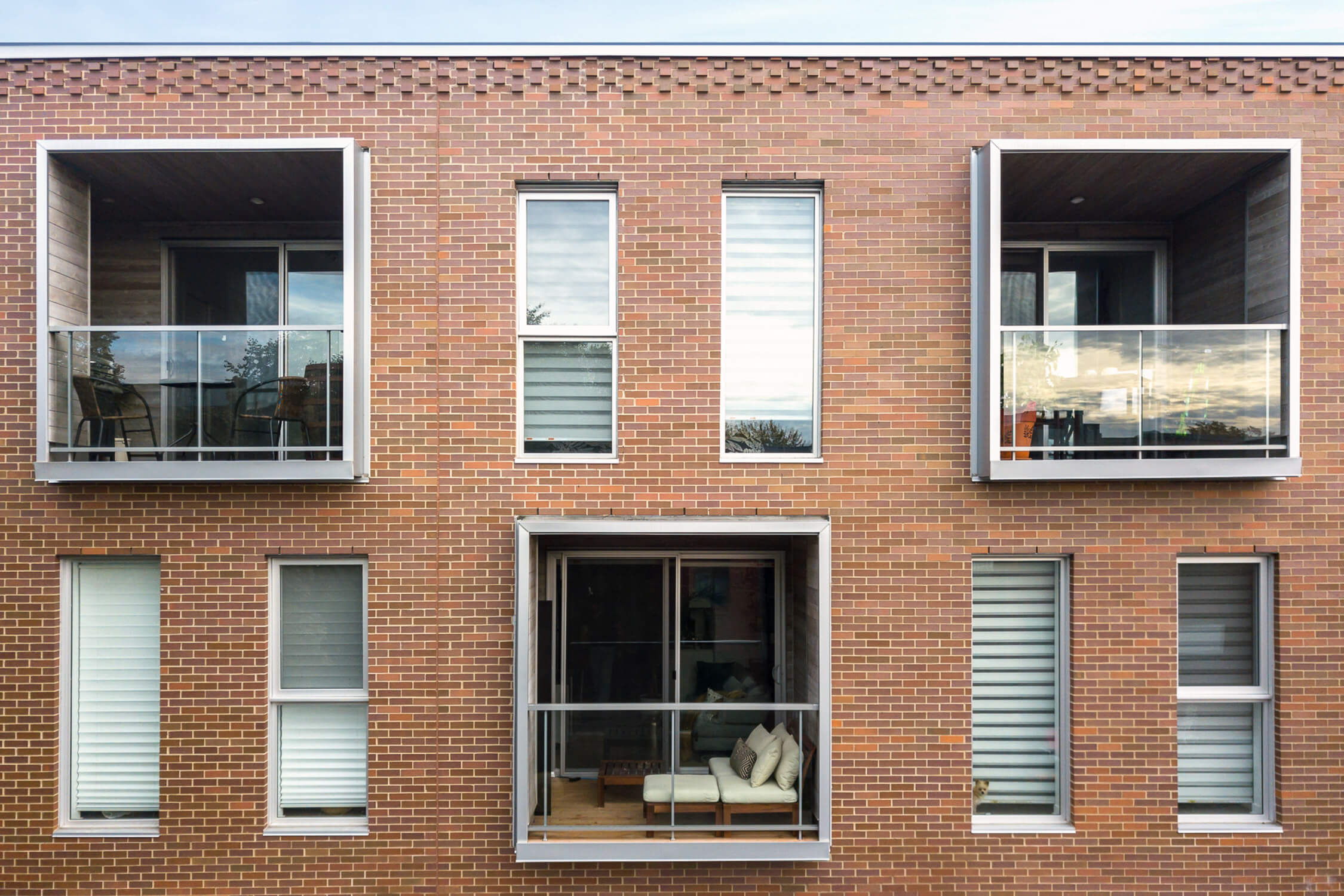 On a quiet residential block, Le Jardinier offers a quintessential example of missing middle housing, and of Montreal urbanism. As housing shortages and urban sprawl continue to threaten the economic and environmental viability of North American cities, ADHOC’s human-scaled design suggests that the future of cities might look more like the past.

In the heart of Montreal, the 17-unit building Le Jardinier introduces gentle density – and a surprisingly vibrant green space – to the city’s evolving urban context.