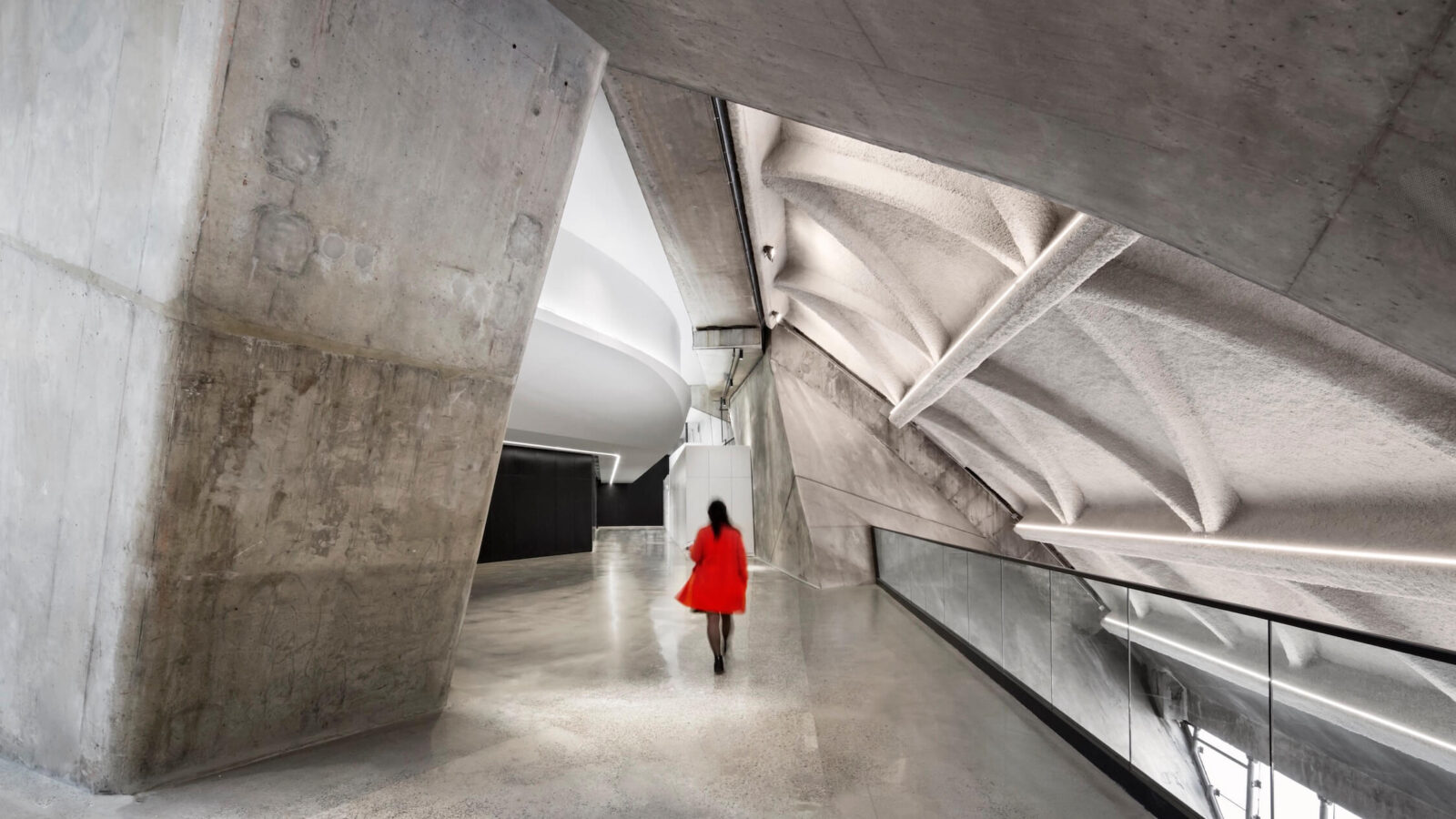 An Office Like No Other Revives Montreal’s Olympic Tower

Designed by Provencher_Roy, a marquee workplace for Desjardins brings new life to the long-dormant civic showpiece.

You can’t miss it. Inclined on a dramatic angle, the swooping tower that crowns Montreal’s Olympic Park is visible from much of the city. But its unmistakable presence conveys an uneasy legacy. In the years the followed the 1976 Olympics, the stadium complex that so emphatically epitomized the city’s cresting global cachet increasingly became a symbol of unpaid debts, unfulfilled promises and cosmopolitan dreams cut painfully short. Today, the tide may be changing again – and the proof is right inside.

Thanks to a deft architectural intervention by local designers Provencher_Roy, the Olympic Tower’s long-unused interior levels have been reimagined as a marquee 1,400-person office for financial giant Desjardins Group. After being largely unoccupied since 1987, seven of the tower’s 12 floors are now home to Desjardins’ online-services hub. 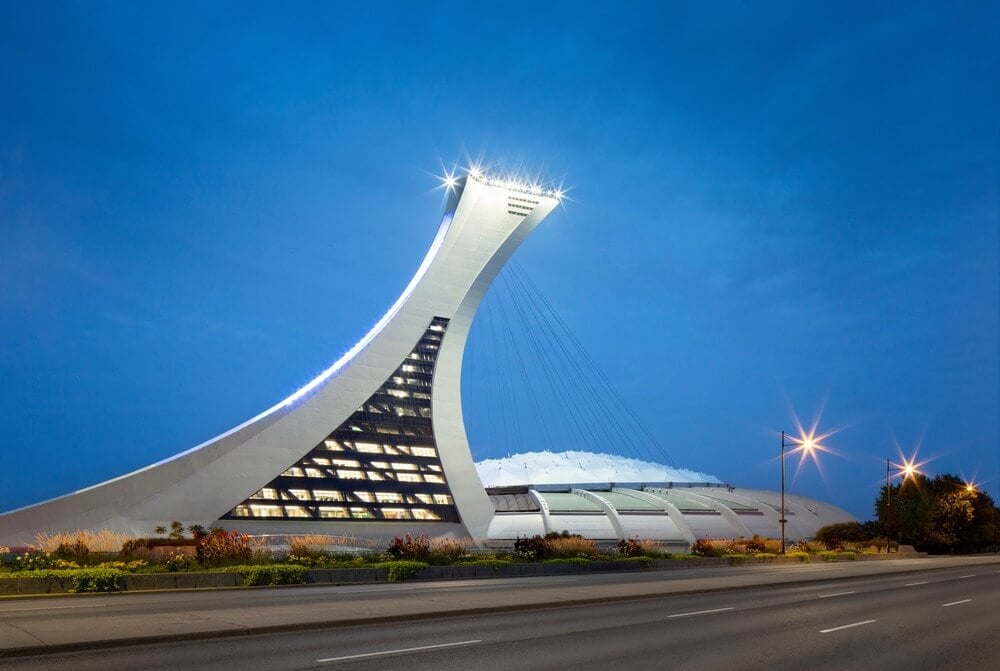 Designed by French architect Roger Tallibert, also responsible for much of the the Olympic complex, the stadium tower’s levels were originally built to house offices for international sports federations, although their tenancy proved short-lived. (The stadium itself later suffered a similar fate when the Montreal Expos decamped for Washington, D.C. in 2004.) The decades of vacancy left the concrete tower in poor shape, with a failing building envelope and dysfunctional mechanical systems. For Provencher_Roy, it meant a gut job. 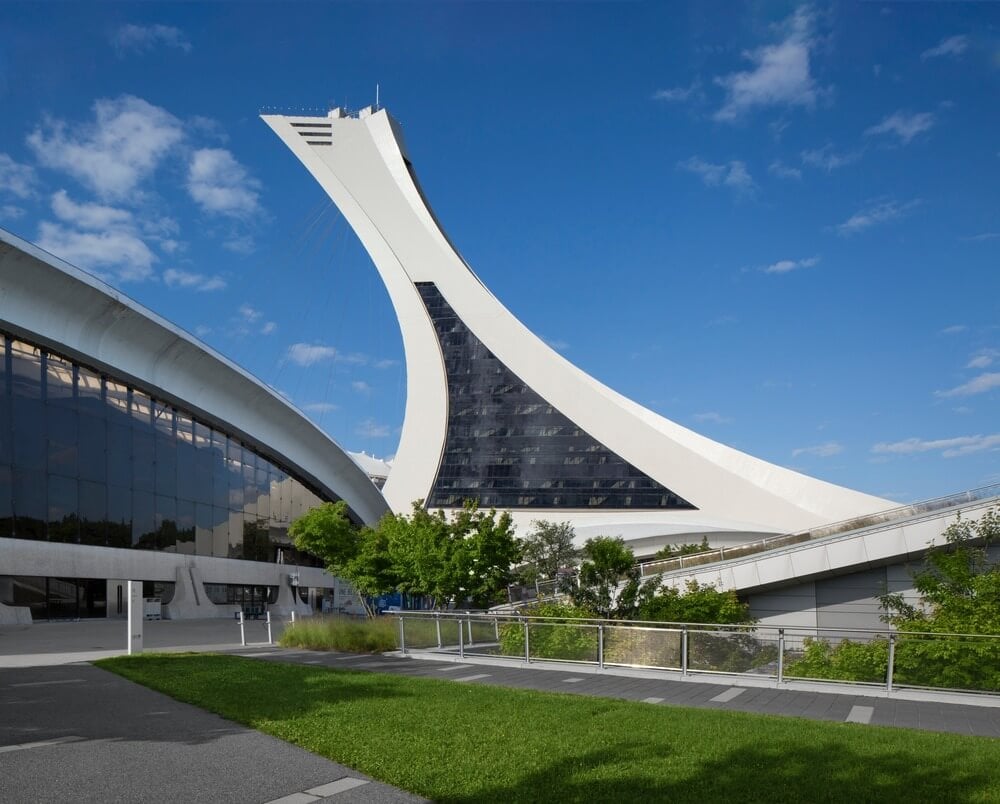 To begin with, the staid prefabricated concrete facade was replaced with a glass envelope that floods the interior with natural light. The sleek new curtain wall’s dark glazing is a contrast to the tower’s concrete skeleton as well as the original facade. 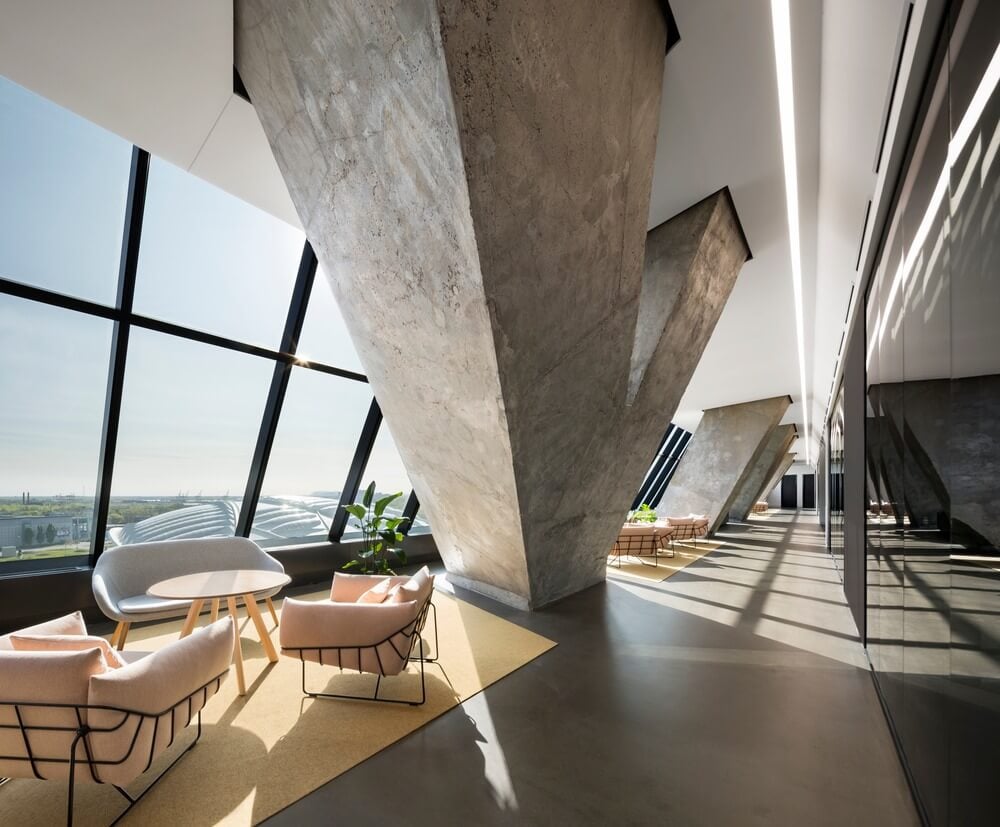 Inside, the tower’s concrete shell is treated more reverentially. A simple white palette emphasizes the angular drama of concrete columns that defines the office’s perimeter. The raw concrete’s curves and textures stand out against Provencher_Roy’s sleek monochrome finishes, with a series of collaborative work areas and casual gathering spaces meeting the floor-to-ceiling windows. 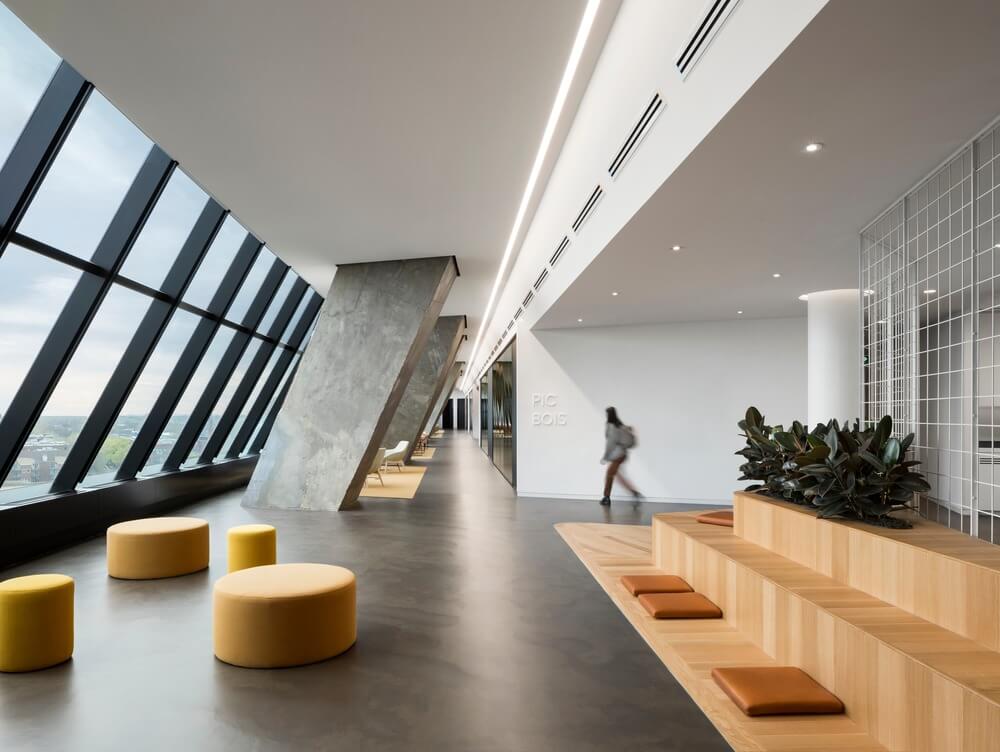 Anchored by white and black tones – along with bursts of Desjardins’ trademark green – the offices are accented by warmer notes of greenery and wood as well as a colourful assortment of furnishings. 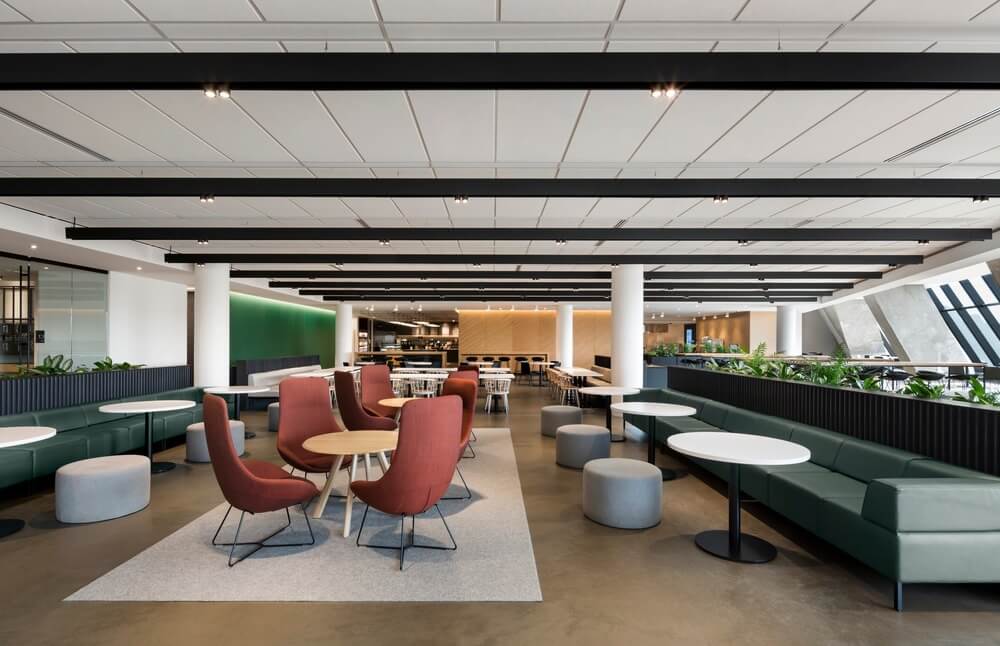 An emphasis on communal spaces is palpable throughout, with multi-purpose rooms and cooperative workspaces complemented by more playful uses, including what’s described as a “creative culinary lounge.” 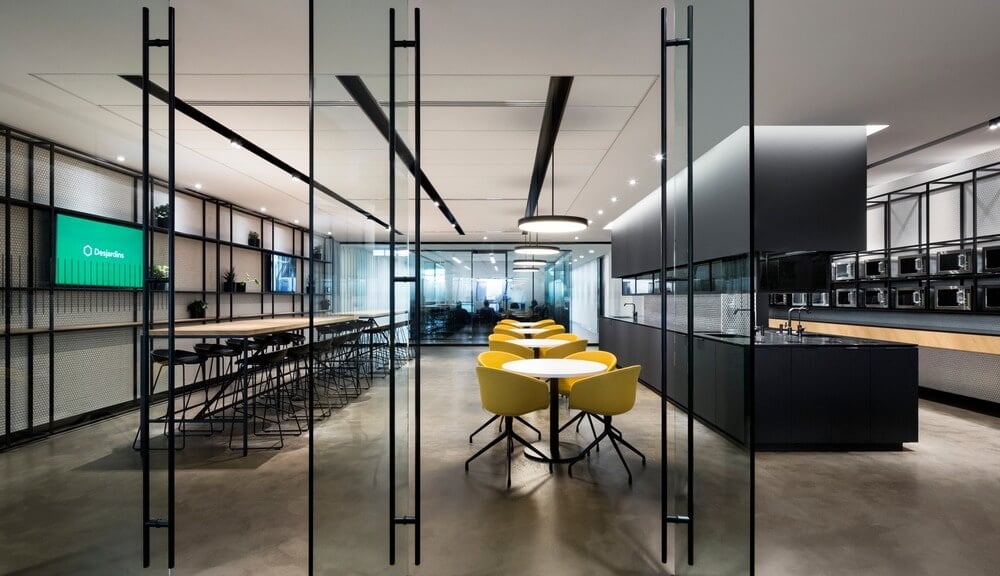 The tower’s internal circulation has also been artfully calibrated to celebrate the stadium’s concrete structure. Interior passages animate Taillbert’s raw 1970s shell, all while opening up surprising views into the stadium itself. 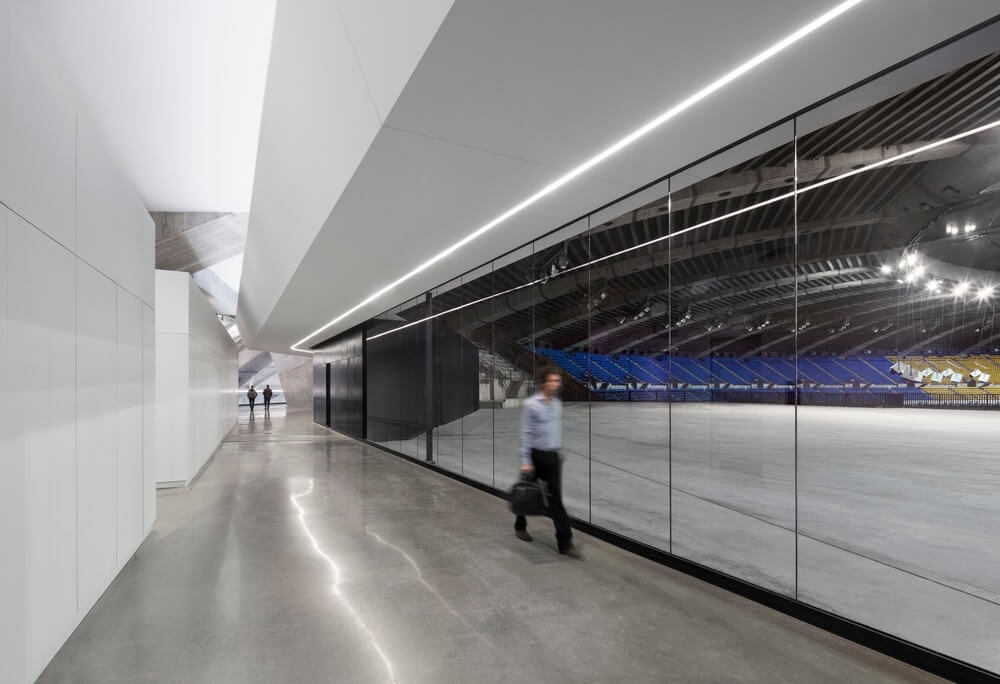 For a sprawling Olympic complex rightfully dubbed a white elephant, the presence of Desjardins’ new office represents a small but meaningful evolution. According to a release celebrating the project, the tower is “now an indelible mark on the collective imagination.” But it was probably always so. Looming over so much of the city, the Olympic Tower is an icon, for better or worse. These days, it’s tempting to say that it’s for the better. 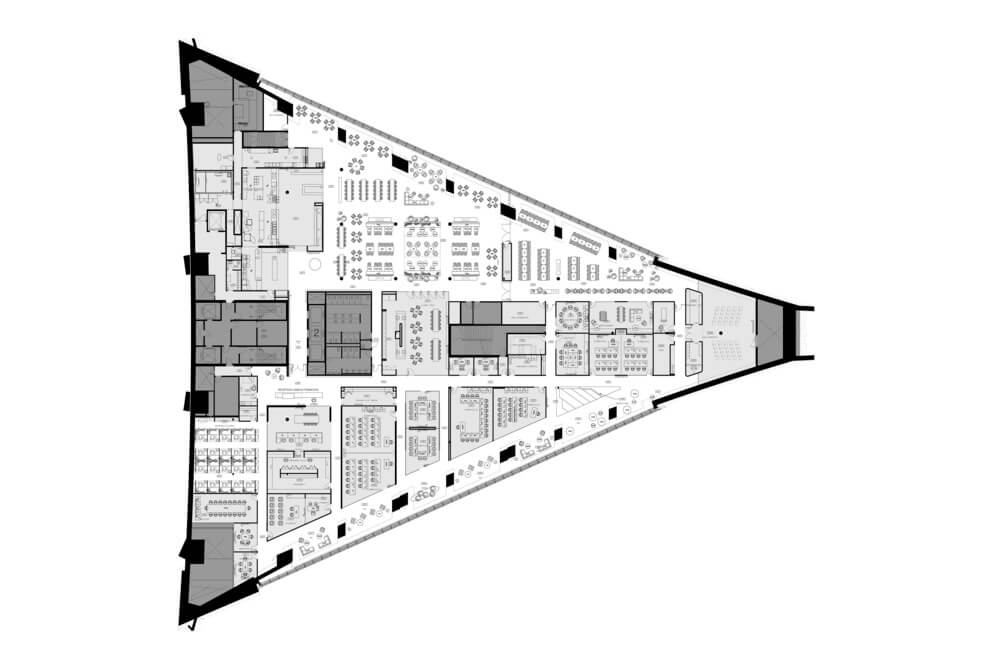 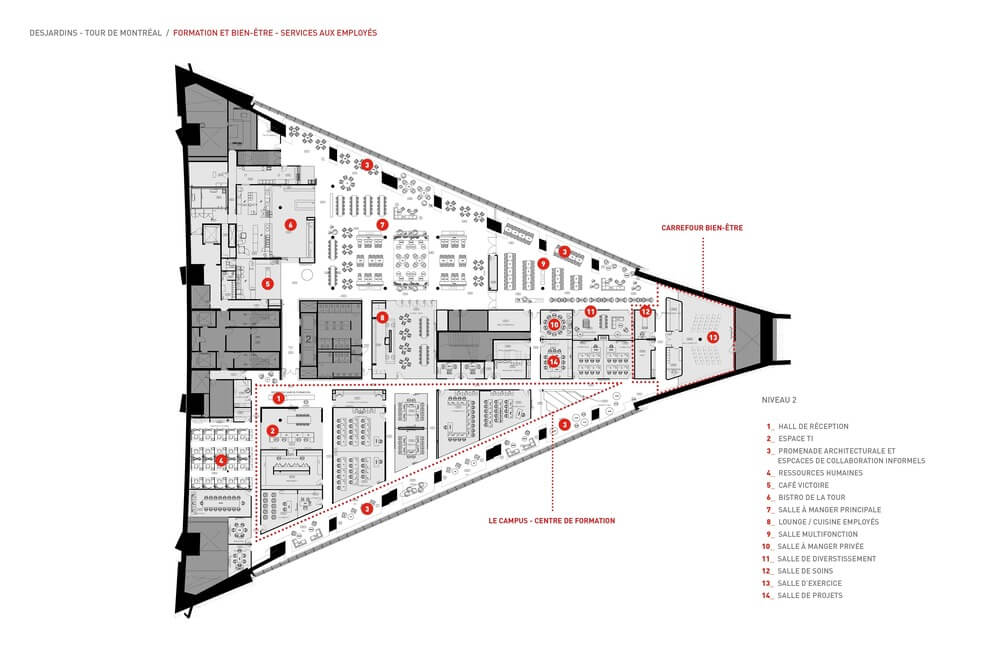 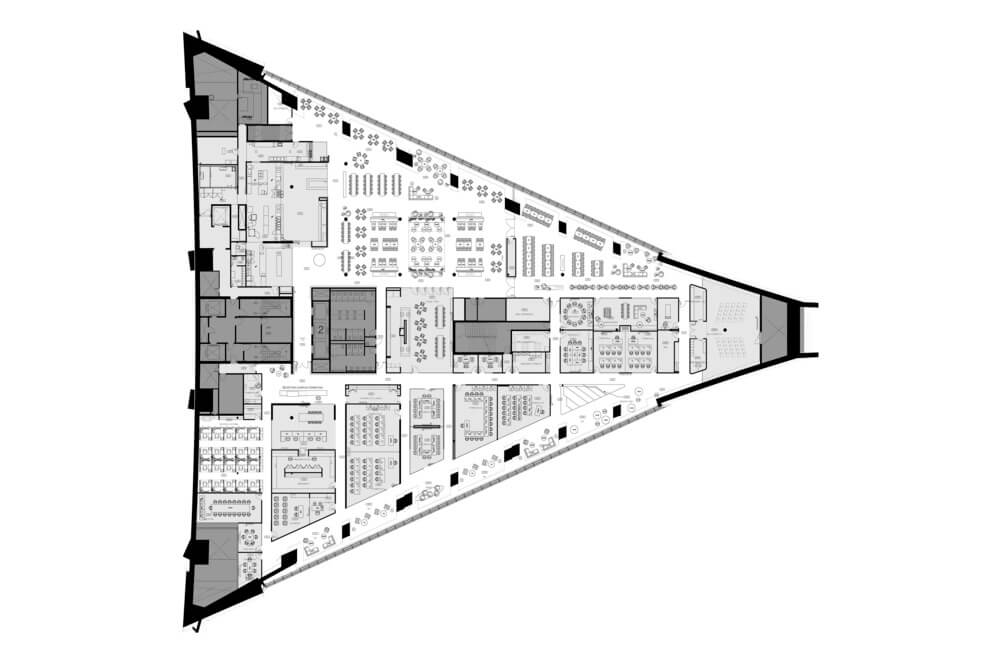 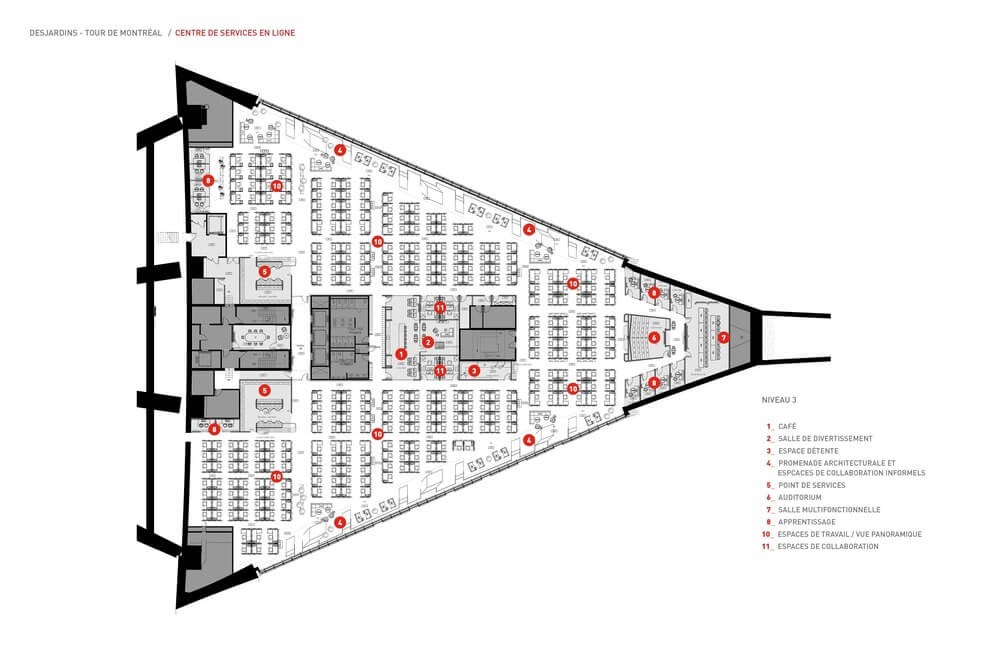 Designed by Provencher_Roy, a marquee workplace for Desjardins brings new life to the long-dormant civic showpiece.