Andrew Kudless on the Art of Digital Fabrication
With his sculptural objects - from intricate lamps to massive concrete wall installations - the designer explores the cutting edge of parametric design and digital manufacturing. 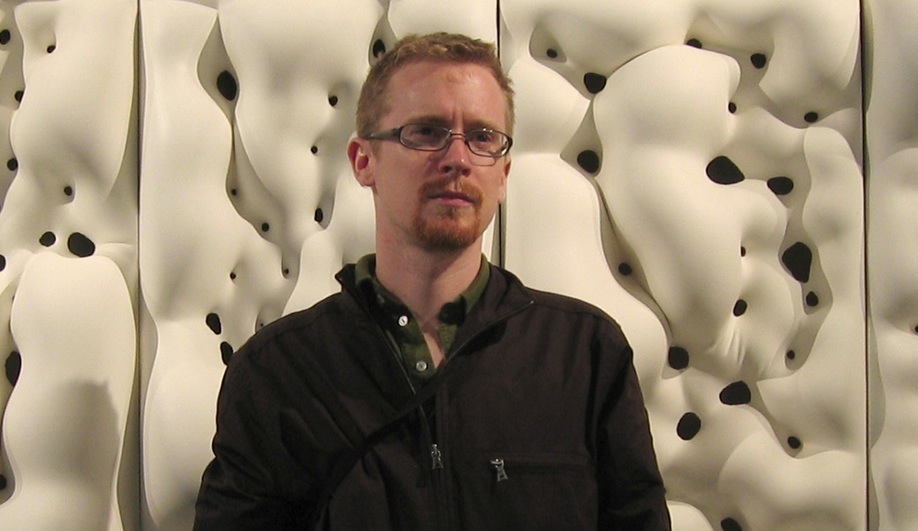 This prototype for the P_Ball sculpture, as seen on the cover of Azure’s September 2013 issue, was modeled digitally and then 3D printed from concrete. 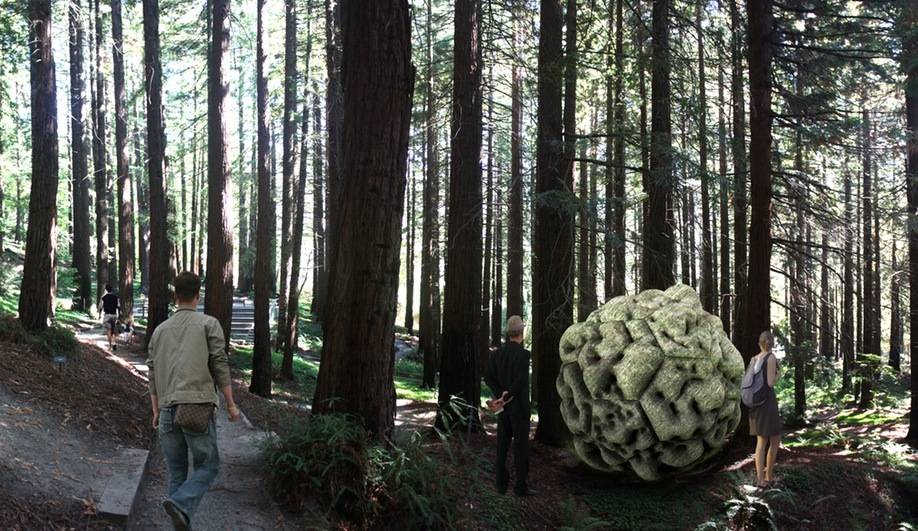 Matsys’s rendering depicts the full-size P_Ball, also called Seed, as it would have appeared installed at the Berkeley Botanical Garden in California.rn

The latest P_Wall is installed at the FRAC Centre in Orleans, France, opening later this month. It’s composed of 34 pre-cast concrete panels made from five unique molds, shifted and flipped to break up any visible repetition. 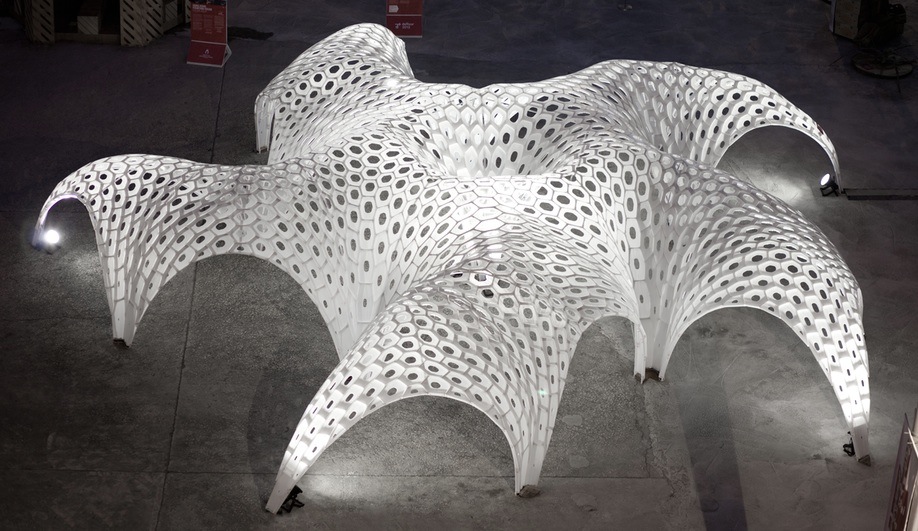 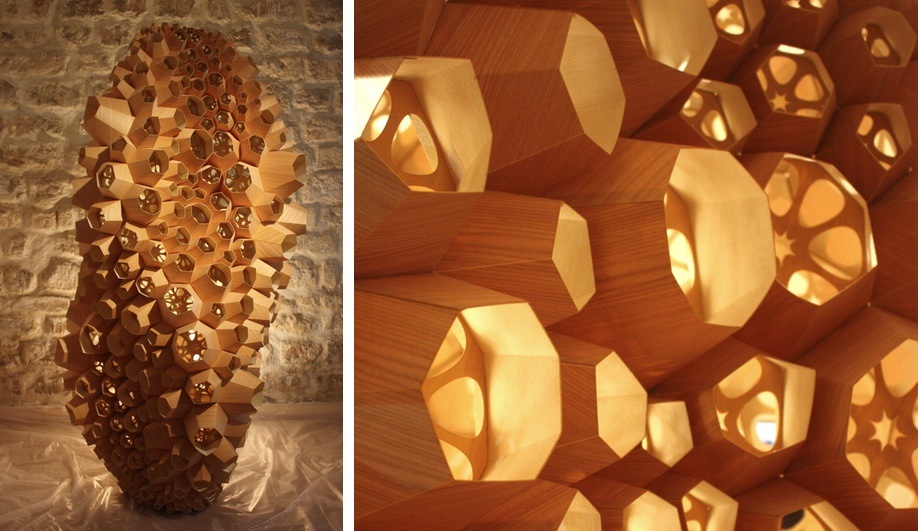 Chrysalis (III) is composed of 1000 cells, self-organized along a surface using modeling software, then digitally fabricated from paper-backed wood veneer and assembled by hand. 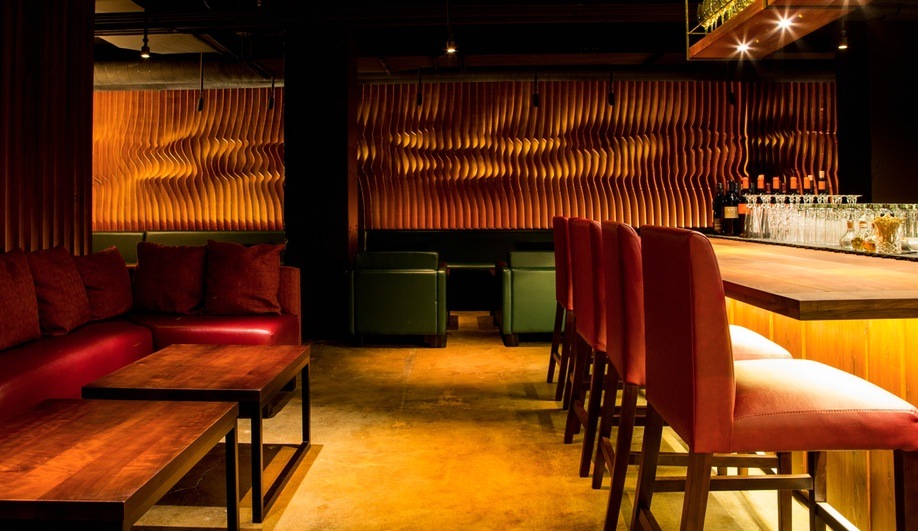 The undulating ribs of the Roka Akor Bar Wall in San Francisco evoke the waves, wind and rolling landscapes of the Bay Area. Plyboo sheets were CNC cut into ribs and backlit; the ribs align when flat to nearly eliminate any waste in the fabrication process. Photo courtesy of Aubrie Pick.

Seed, one of Kudless’s recent projects, is featured on the cover of our September 2013 issue, now on newsstands. While it looks like a spongy brain, it is actually made of 3-D printed concrete – a groundbreaker given the fact that up until recently the only materials used in additive manufacturing were polymers.

At Matsys, the studio Kudless founded in Oakland in 2004, he has produced a range of work that similarly straddles the boundaries separating art and design, sculpture and architecture, digital and material, and deliberate and random. And he does so by designing with parametric modelling, and making with digital fabrication methods (including CNC routing and lathing) in combination with flexible mould-casting and hand assembly. His experimentation is no doubt informed by his position as an associate professor at the California College of the Arts.

We wanted to find out what drives Kudless’s highly innovative experimental approach.

AZURE: What was the inspiration behind Seed, the object that appears on the cover of Azure’s September issue?

Andrew Kudless: This was actually a study model for a much larger project conceived for the Berkeley Botanical Garden. It was based on my initial reaction to a site in a very secluded redwood forest. The tall, sentinel-like trees and minimal undergrowth produced a very silent and meditative space, almost like the trees were watching over something. I wanted to place an object on the site that was mysterious and a bit out of place and scale.

While the final project, which measures two and a half metres in diameter, was to be produced using thin shell fibre-reinforced concrete precast panels, I made the small model with a cement-based 3D printer recipe by my colleagues at Emerging Objects. It’s about 40 centimetres in diameter, and is hollow so that it’s quite lightweight, probably five to 10 pounds.

AZ: Seed is part of a larger series that includes the P_Wall concrete panels with a similarly bulbous form. What are some of the challenges you’ve faced with the P series?

AK: All of the P series projects shared a similar challenge: how do you coax a system to produce results that are beyond the means of the designer? That is, I’m not that interested in total control in my projects.

In this series, I’ve been interested in the self-organization of material while it undergoes some sort of physical force. I set up the conditions – such as the type of fabric, the location of the constraints on that fabric and the overall formwork – but the rest is solved through the interaction of the flexible fabric formwork and the liquid plaster slurry. Equilibrium between the elasticity of the fabric and the mass of the plaster produces the final form. It’s interesting to figure out when it’s better to stand back and allow systems to produce themselves.

AZ: When Jakob + MacFarlane’s FRAC Centre in Orleans, France, opens on September 14, it will include a new P_Wall installation. What’s your favourite thing about this project?

AK: To be completely honest, my favourite thing is that it’s a permanent installation in the lobby. Much of my work has been temporary installations so it’s really an honour to have something that people will be able to interact with over a longer period of time. This is especially important with the P series, as people tend to be drawn to it and want to have a real tactile experience with it. As visitors to the museum walk from the lobby into the main galleries, they will brush up against the installation and caress it – unlike an artwork protected from a visitor’s touch.

AZ: Your work frequently begins with an algorithmic design – and then you introduce a certain amount of randomness on a cellular level into the digital model, which you then fabricate mechanically. What appeals to you about working this way?

AK: This speaks to the heart of my work. I’m drawn to work that walks the line between order and chaos. When you look at almost every natural system, what might at first look chaotic often hides a deeper and more complex organization at another level. Or, things that appear ordered are often the result of countless random agents working independently, following certain general rules. This is true from landscapes to DNA.

Working with algorithms allows me to explore both the rules and the resulting forms in relation to the desired performance of the project. This is the future of design. As our objects, spaces, and buildings become more alive and responsive, our task will be to orchestrate the conditions that allow them to evolve productively over time, both during the initial design process and after.

AZ: As an architect, designer and artist, you frequently work with digital tools. What draws you to the digital, rather than traditional, ways of doing things?

AK: Although I do use digital tools extensively, I wouldn’t say that I’m opposed to traditional tools at all. Both digital and analog methods have advantages and disadvantages and it’s my goal in my work to productively merge the two ways of working.

I absolutely love working with my hands; I find working with a material or assembling a complex structure both meditative and relaxing. I often miss this when working on the computer, and I try to output my work as often as I can to get that physical feedback. On the other hand, I also enjoy the flexibility and sketch-like openness of working in digital parametric models. I can lose myself in exploring complex networks of geometry and logic, but it’s always the physical realities of material and fabrication constraints that bring me back to earth. Moving back and forth between both worlds is essential to my work.

AZ: What’s next for Matsys?

AK: I’m in the process of diversifying my practice. For the past 10 years, the installation has been my (and many of my colleagues’) primary means of research, thanks to the emergence of inexpensive digital fabrication tools. But I’m also interested in other scales of engagement. I’m in the process of producing several books, and working on industrial design projects and larger architectural projects.

Installations will probably always be central to the development of my research, as they offer the best combination of speed, cost, and freedom when developing new research. But I’m also looking for ways at both smaller and larger scales to push the work.