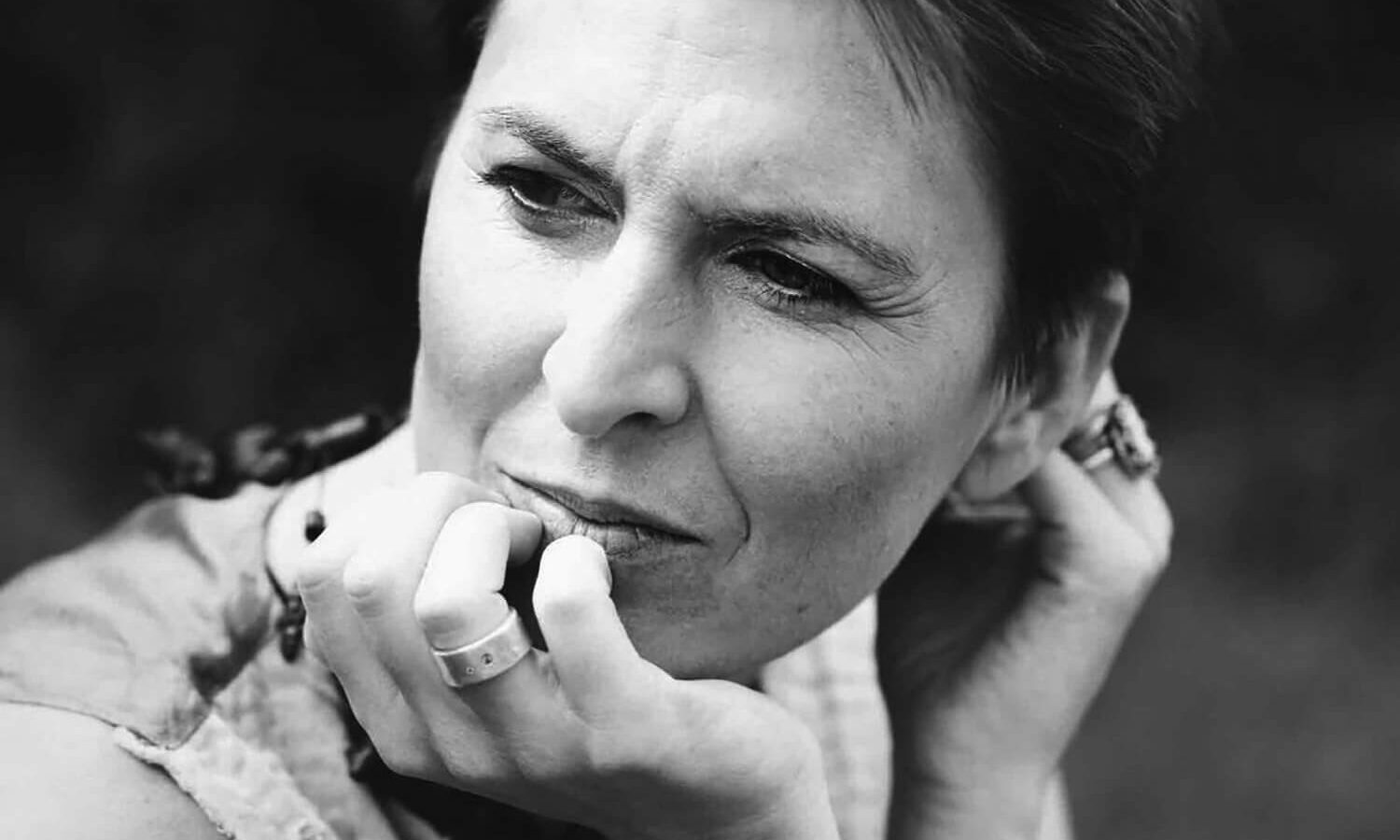 Azure catches up with the German architect to talk about the importance of building with one’s hands, investing in local know-how and rehabilitating the image of mud and bamboo architecture.

Architecture is a tool for improving lives. That’s the ethos of German architect Anna Heringer, who has been working in Bangladesh since when she was 19. Building with local input – and with such readily available materials as mud, bamboo textiles – she directly involves the very people who will eventually use her buildings schools and gathering places. In 2006, Heringer completed the METI Handmade School, winner of an Aga Khan Award for Architecture, in Rudrapur. This was followed by the DESI Training Centre, unveiled the following year in the same city. In 2018, she started teaching a studio at Harvard University’s Graduate School of Design, focused on designing a for Rohingya refugees in Bangladesh. Besides creating such unique, useful buildings in Asia, Africa and elsewhere, Heringer also seeks out income opportunities – through corresponding skills training and of local crafts – on behalf of the communities with which . One example – Didi Textiles, an initiative that provides Bangladeshi women with an online sales outlet for their work – was the subject of her exhibition at last year’s Venice Architecture Biennale. Recently, Azure caught up with Heringer to talk about the importance of building with one’s hands, investing in local know-how and rehabilitating the image of mud and bamboo architecture.

The first projects that made your name in architecture were the METI and DESI schools in Bangladesh. What was the process like for the METI project? Was the entire community involved in building it?

Yes, the workers were all from the surrounding community. That was very important. If I had built this structure with any other material – rather than bamboo and mud – I would not have been able to hire them. I really wanted to have them involved in the project, and also to have the children come every afternoon after they were finished with their classes. We had a team of Montessori teachers with us from Austria to really include the children in an appropriate way: doing easy, light work that was also very useful. 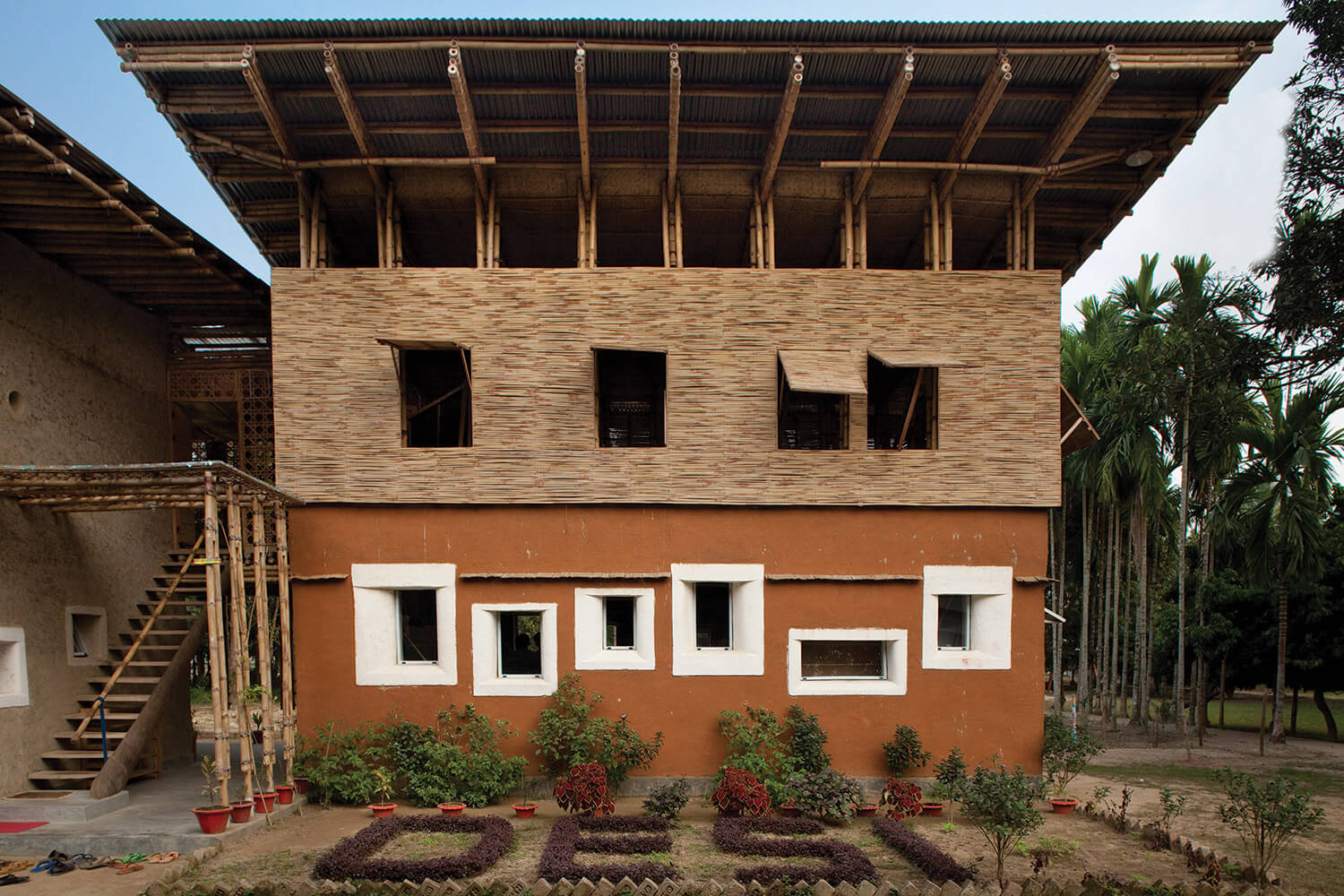 Were members of the community actually problem-solving as they were helping to build?

Yes. We also introduced them to seeing a building in elevation, in layout, in floor plans and so on, so that they would understand a little bit about different perspectives. They would learn the bamboo-lashing techniques and how to use the drilling machine. Even the girls were working with the tools and were really excited about it.

The most wonderful moment was seeing the children standing in front of the school at the end and everyone marvelling that we had just built it out of dirt and with our own hands. For me, that was the lesson: that we were building up trust and self-confidence – and that that’s probably the most empowering part of architecture.

In your championing of various architectural techniques – Zabur brickwork, the thatching used in your Zimbabwe projects, your use of rammed earth in Spain – there is a strong sense of bringing back working with one’s hands.

I think that’s very important. If I create something without ever using my hands, I feel I’m not using my full energy and creative power. I think that, in society in general, this causes depression: In a way, you feel you’re not leaving any traces, and that’s a very human need – to want to leave traces, to create something. In scenarios like the Rohingya refugee camp, people are able to do very little: Sitting down and waiting for help is probably the most frustrating thing. We’re trying to bring in know-how so that people could use their hands and the dirt underneath their feet to create, from ground zero more or less, their own homes.

You have always been interested in exploring mud architecture, first as a student and then through many of your subsequent projects. Why?

Mud has a very bad image, even among the Rohingya refugees with whom we are currently working. I had a book with me about [self-taught Indian architect] Didi Contractor, a colleague who has created some beautiful mud houses in India. I showed the refugees these houses and their eyes started to sparkle. Beforehand, I had asked them if they could imagine living in mud houses and all of them, from the smallest children to the adults, said no: “No mud! We don’t like mud.”

And then, after I showed them these houses, I asked them if they recognized what material they were made from. They said, ‘Yes, it’s mud, but it’s beautiful!’ So I thought that, if we could just build one project showing the beauty and the potential of this material, we could inspire the community to learn the relevant techniques to build with it properly – and also give the people some income opportunities. 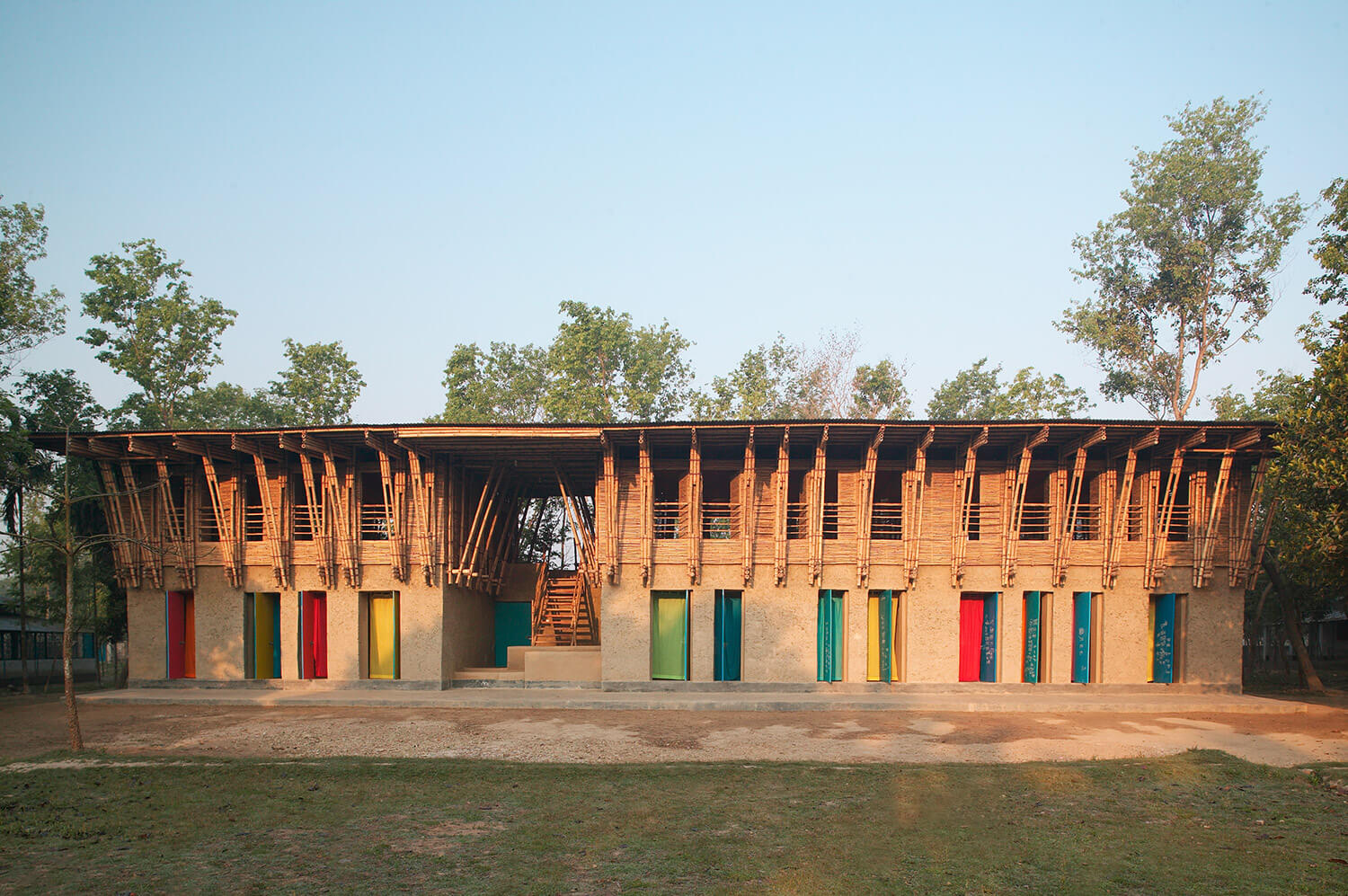 Winner of a 2007 Aga Khan Award for Architecture (and constructed in just six months), the METI School in the Bangladeshi city of Rudrapur embodies Anna Heringer’s building philosophy: The entire project – from the mud and bamboo framework to the colourful doorway curtains – is composed of local materials. PHOTO: Kurt Hoerbst

You’re referring to the Rohingya daycare centre that you’re working on as part of the architecture studio you’re leading at Harvard. How did this project come about?

I was initially invited to help by an organization called OBAT Helpers. But I was also contacted by a friend, a social media star named Jérôme Jarre, who approached me because of a TED Talk I had given on the warmth and wisdom of mud buildings. I thought it would be a great project to work on with students – to bring them to the essence of what architecture needs from us, but also to think about how important this longing for beauty is. By beauty, I don’t mean a top-down beauty, but beauty that involves self-actualization. In Maslow’s hierarchy of needs, self-actualization is the top need, but I see it as an essential human need.

Toward the end of the Harvard studio, in December of 2018, we made the final presentations with our partners from Bangladesh. Now we’ll see if the structures are really feasible to build, and then we’ll have to find sponsors to implement the project and get permission to build from the government. It’s not easy. The government doesn’t want to have permanent structures for refugees. But what we’re building looks like architecture – the design looks really good. And we design it in a way that we hope will create [the architectural equivalent of] an acupuncture trigger point, something that really shows what people are able to do with their own resources. Because what’s completely lacking in the camps is vision – how a town or a city could develop in the future. 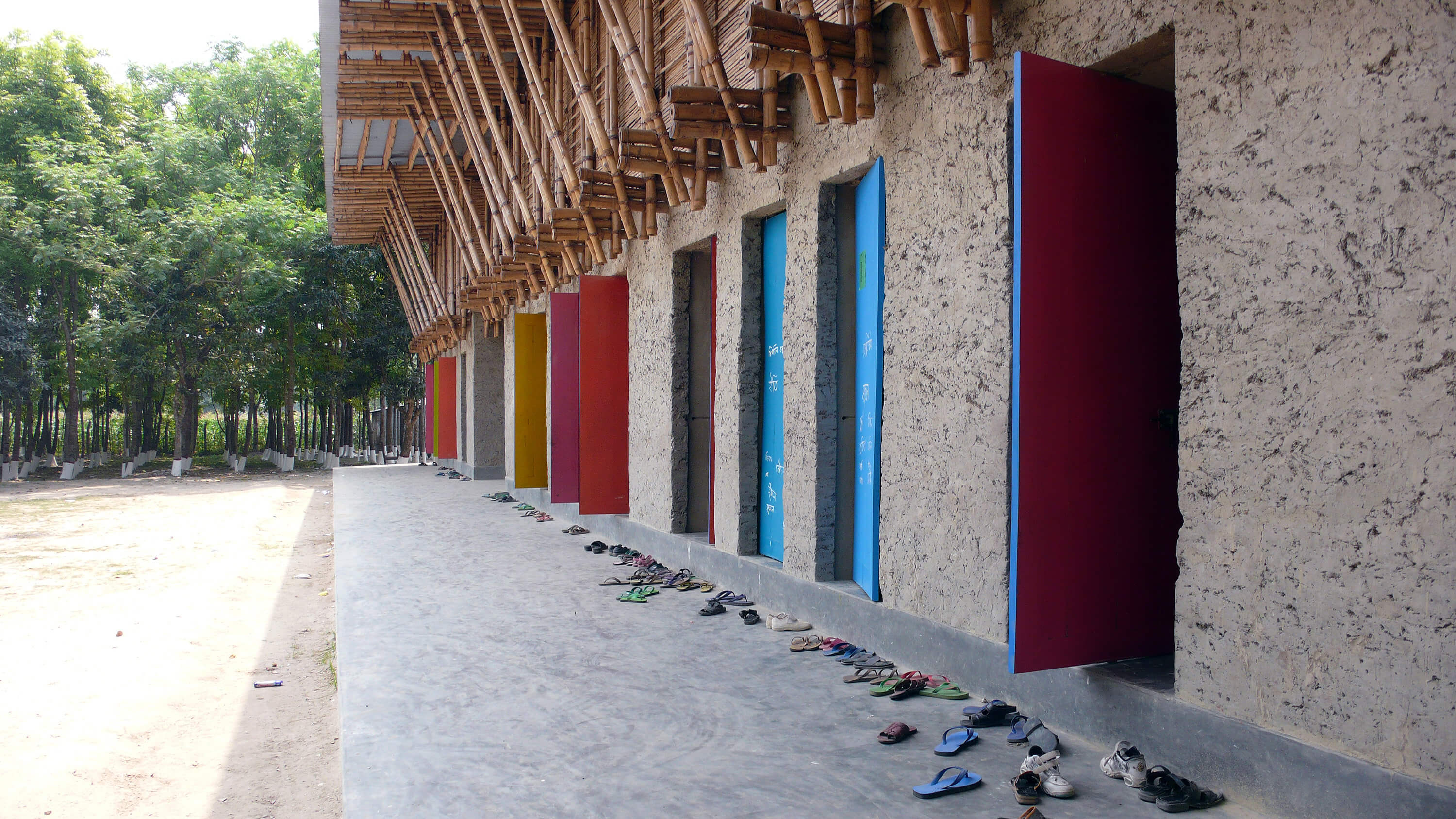 What is it like to work as a Western architect and as a woman in both Europe and Bangladesh?

Being a female architect is not as easy as being a male architect, that’s for sure. But, from my experience, it’s easier to be an architect in Bangladesh than it is in Europe. In Bangladesh, there are normally very strict hierarchies. An architect, for example, would never work on the site. Even if you’re the boss of the bricklayers, you would not do actual brick work on the site – you would just have your hands in your pockets and give orders. I don’t like that at all. The moment you begin to do the work yourself – carrying the heavy mud on your head, experiencing how long the planning process takes – everything goes better in the end. To get around the hierarchy, it’s easier to be coming from Europe, because then you’re not bound by this hierarchy and its limitations. Because you’re not of this culture, you can question and you don’t take things for granted. And that’s a good thing. Now it’s the other way around for me in Europe. There, I work with the eyes of a foreigner: I see the sites with the eyes of a Bangladeshi. I ask, Why is this not possible? Why can’t we just develop the detail ourselves instead of using pre-existing elements? And that’s also a good thing. It’s about questioning comfort and it’s a bit levelling in the end.

Azure catches up with the German architect to talk about the importance of building with one’s hands, investing in local know-how and rehabilitating the image of mud and bamboo architecture.