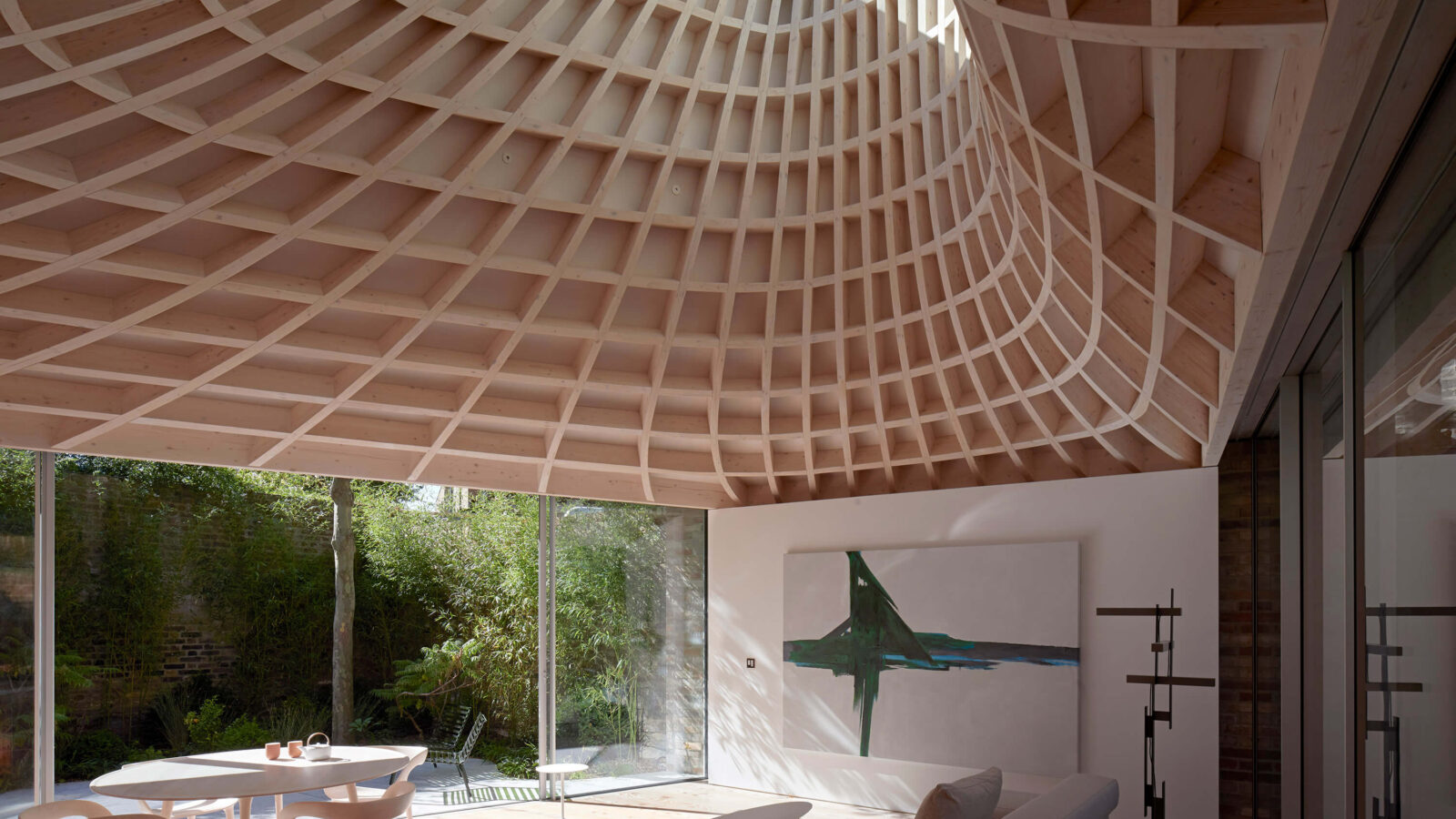 In London, Gianni Botsford Embeds a Hidden Oasis of a Home

Capped by a dramatic copper roof, the multi-level house on the site of a former London garden offers sanctuary and serenity in the bustling city.

“I like projects that are difficult or contradictory or that have big constraints,” architect Gianni Botsford says when I meet him outside his so-called House in a Garden, recently completed in London’s Notting Hill. The residence in question arguably fulfills all of those criteria: It’s a pavilion with a sinuous copper-clad roof and basement built in a small, north-facing plot right behind the 1840s villa where the architect has had an apartment for the past 25 years.

Botsford could be described as an expert in tight backland sites, having also completed 2005’s Light House, an home in the envelope of a former cosmetics factory turned warehouse. In that instance, he chose to design inward, placing the bedrooms on the ground floor and creating a series of internal courtyard volumes and terraces to bring light and life into the living areas. “There is something very special about these backland spaces,” he says. “They are secret little worlds where you go down an alleyway and then suddenly this place appears that nobody knows is even there.” 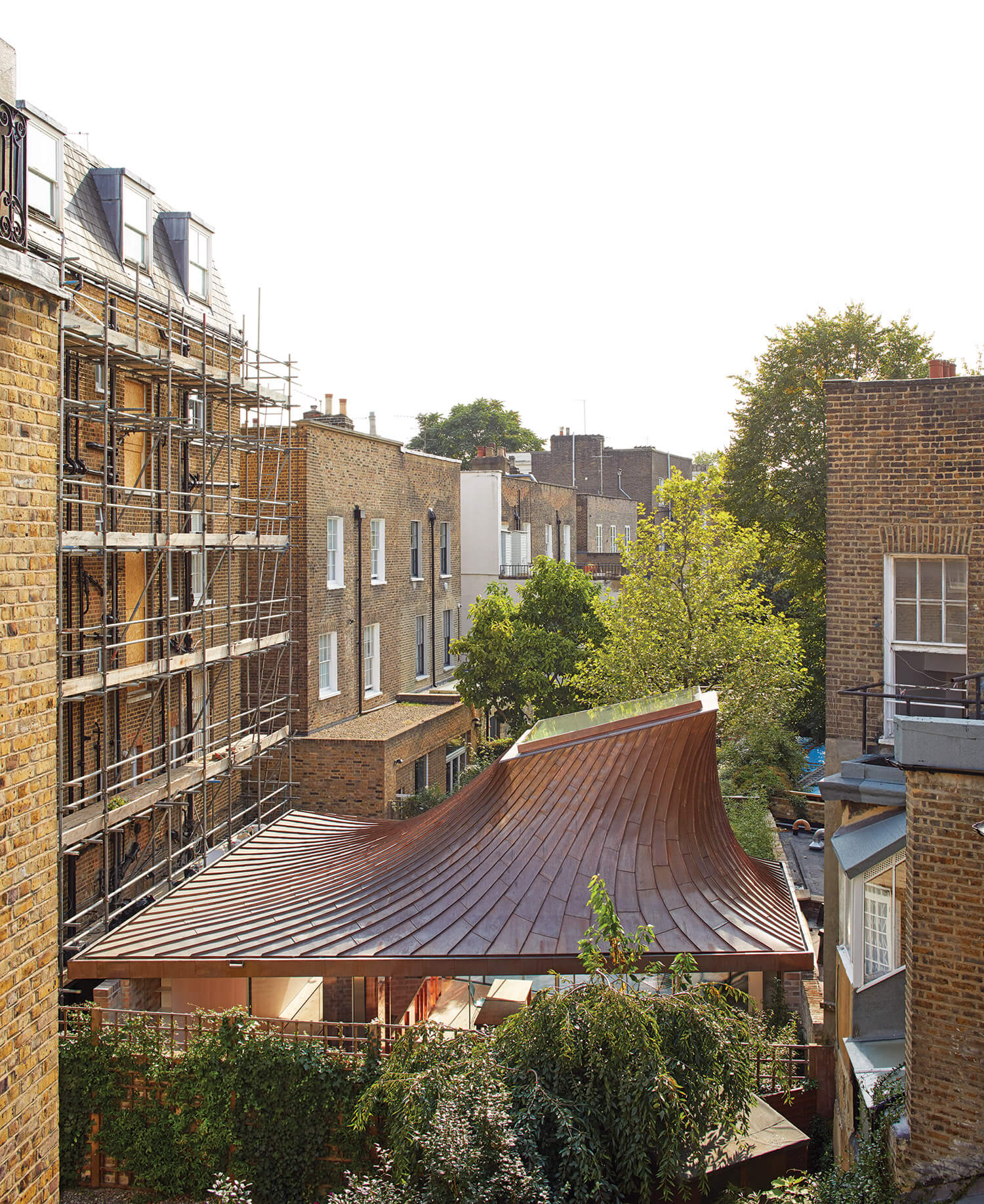 Culminating in a slanted glazed oculus, the engineered-wood roof is covered on the outside by deep brown copper. The structure was fabricated in Italy, then shipped to London in sections.

The two-bedroom House in a Garden replaces a dilapidated and anonymous 1960s bungalow that was built in what was once the villa’s garden. When its freehold came up for sale in 2007, Botsford bought it with a contractor friend and got planning permission for the project before selling it to the current owner. 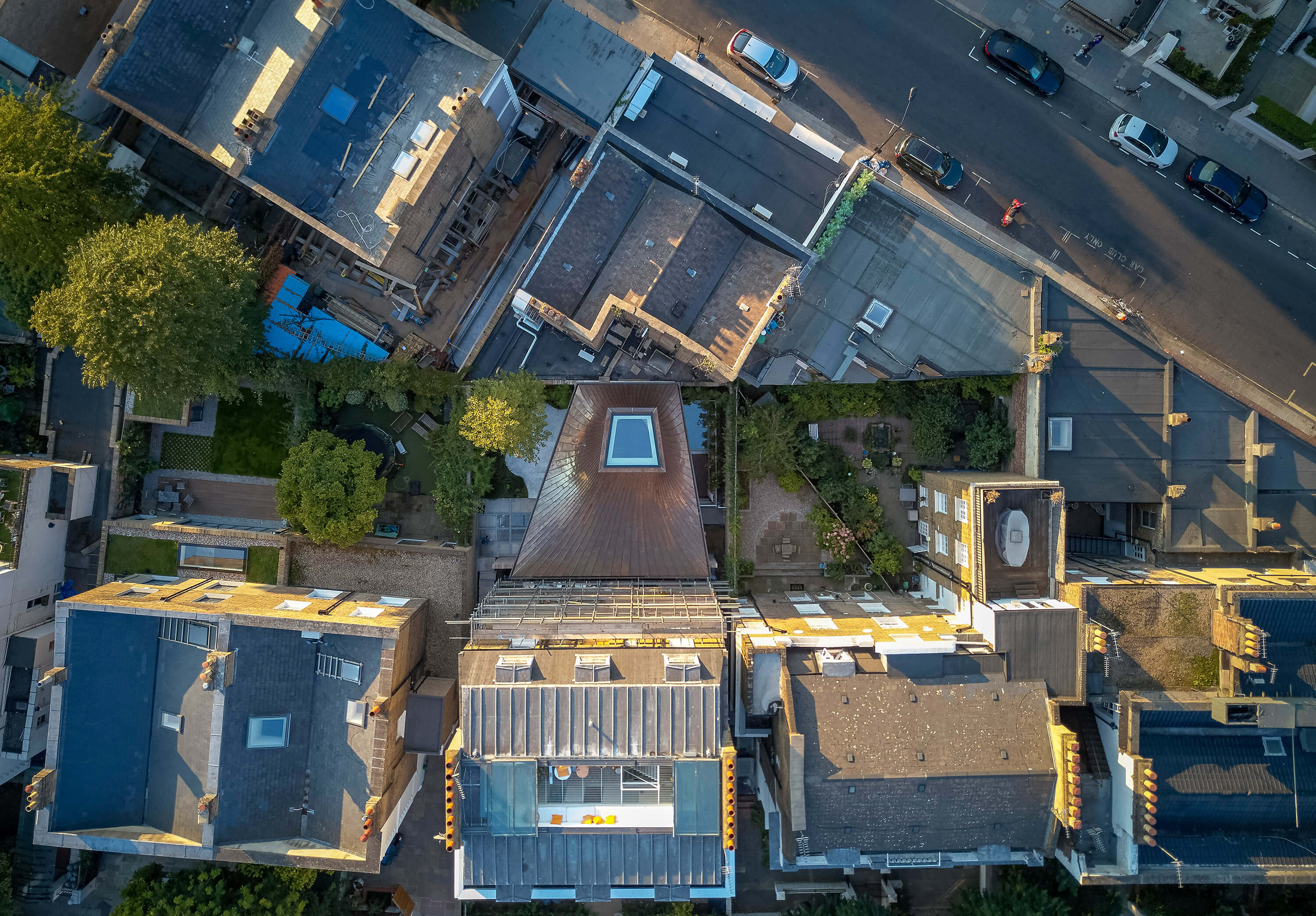 “Our initial approach was a camouflaged house with green roofs and plants and courtyards,” Botsford recalls. City planners, however, wanted a project that contributed more dynamically to the area. He and his team consequently came up with the idea of a garden pavilion crowned by a tented copper roof, earning a more enthusiastic reaction from the planning department. 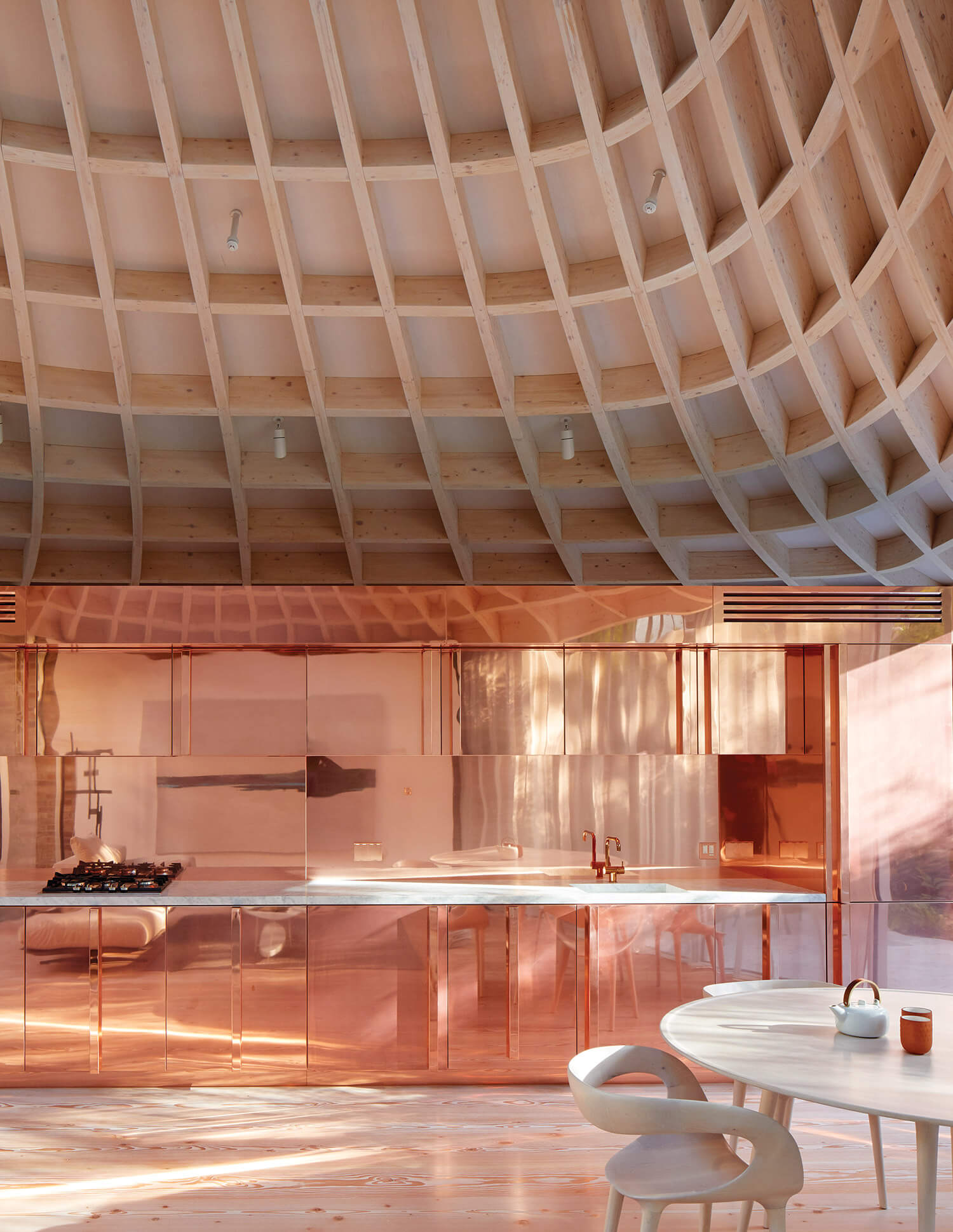 The custom kitchen in the home dubbed House in a Garden by architect Gianni Botsford is clad in gleaming copper. It sits under a twisting honeycomb ceiling made of glulam.

One of the project’s greatest challenges – and one that Botsford was acutely aware of given that he lived above the site – was the lack of light. To address it, he did a lot of work analyzing the in the back garden, where it fell at specific hours of the day and during different seasons. “We used environmental software that could tell us how much light was in each place and at which height, so the form that you see is generated by that process of understanding exactly where light is and isn’t,” Botsford says. “The house itself is essentially built in the shadow of the main building, while the two side gardens and all the glazing are located where the light is.” 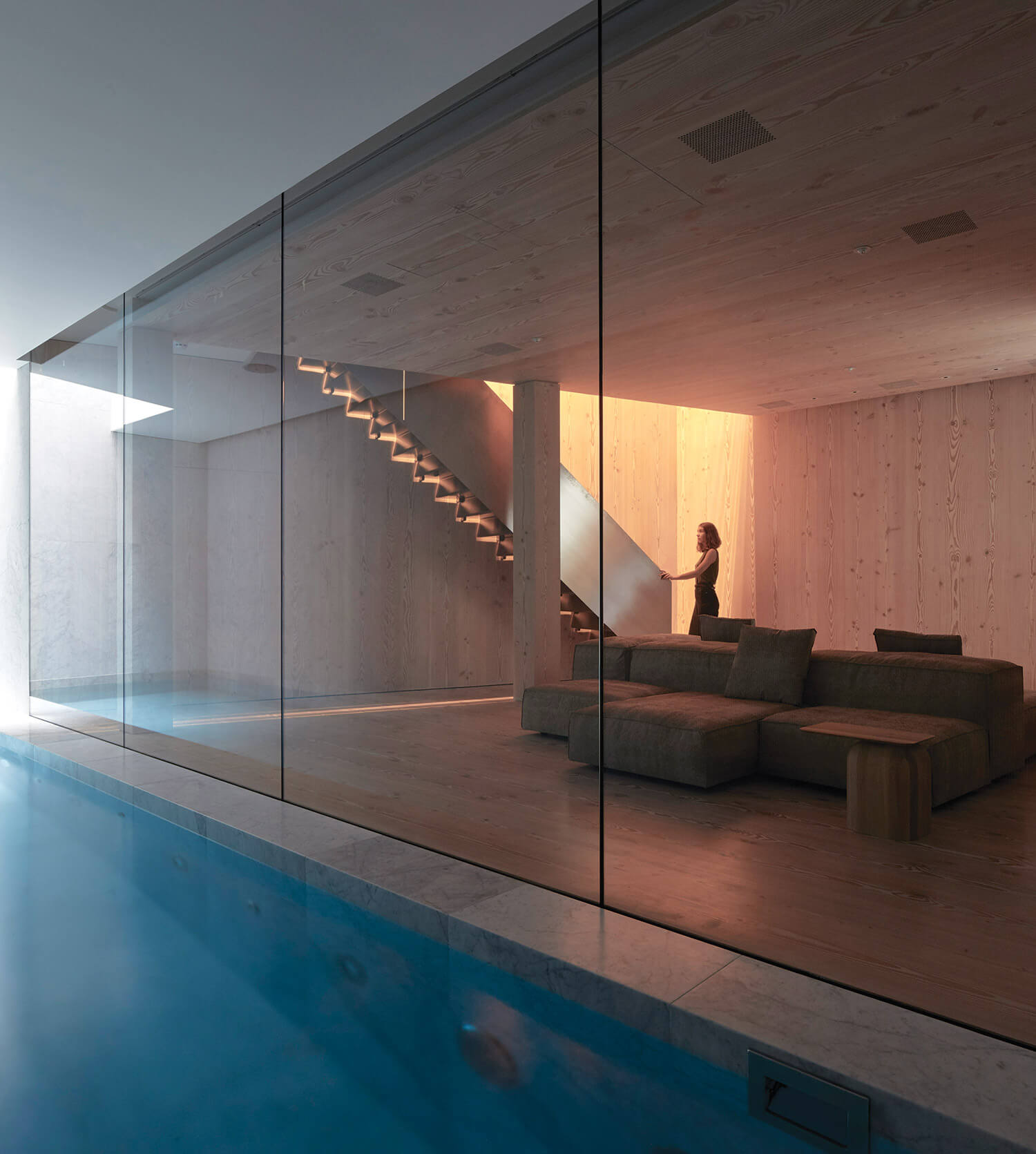 Strategically placed skylights and light wells ensure that daylight penetrates even the lowest level of the multi-storey home, site of a subterranean swimming pool.
We used environmental software that could tell us how much light was in each place and at which height, so the form that you see is generated by that process of understanding exactly where light is and isn’t.
Gianni Botsford

Two light wells bring daylight and greenery (courtesy of walls draped in wisteria, vines and silver-veined creepers) down to the first subterranean floor; skylights do the job for the level below it. Light radiates off the surrounding glass and walls on these two lower storeys, sometimes aided by the clever use of reflective surfaces and carved marble. By the second basement level, the daylight is very suffused, but ample enough to ensure that occupants still feel connected to what’s happening outside. 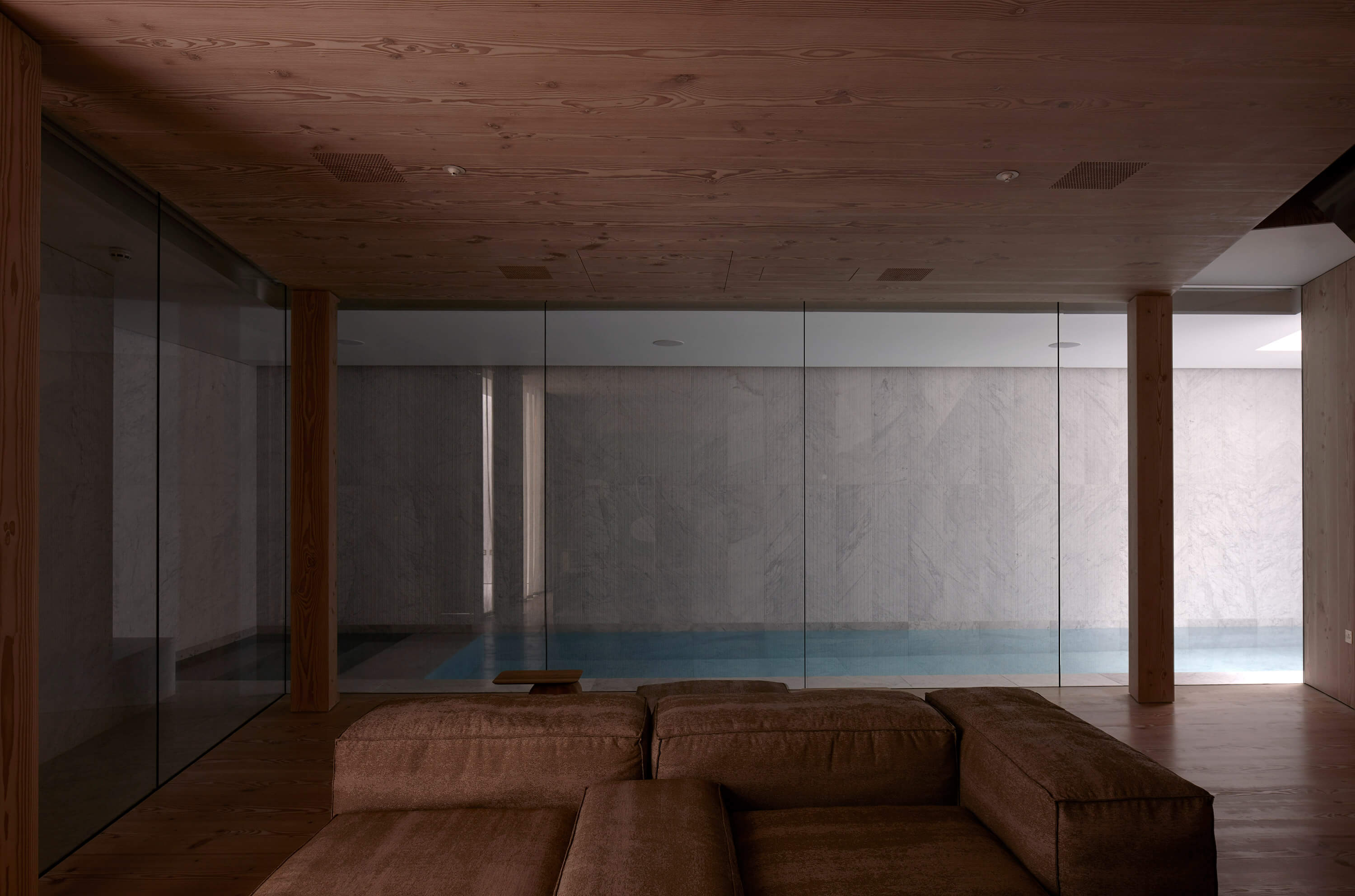 The project’s most visible and important element, both internally and externally, is undoubtedly the roof, which is clad in sweeping sheets of deep brown copper (it will only turn green in about 50 years, says Botsford) and shaped to provide maximum privacy and light for both its inhabitants and its . Inside, it consists of a honeycomb-like, double-curved glulam structure that culminates 6.5 up in a slanted glazed oculus.

Although the structure looks like it has been digitally generated, it was actually developed via digital and manual processes, then fabricated by hand in a workshop in northern Italy and transported to the U.K. in eight sections. If you look at it closely, you will notice that it is also somewhat off-centre and askew. “We thought a lot about not rationalizing it too much,” Botsford explains, pointing out how it twists in three different directions. “It could easily have been made symmetrical, but it would have lost this organic character that it has.” 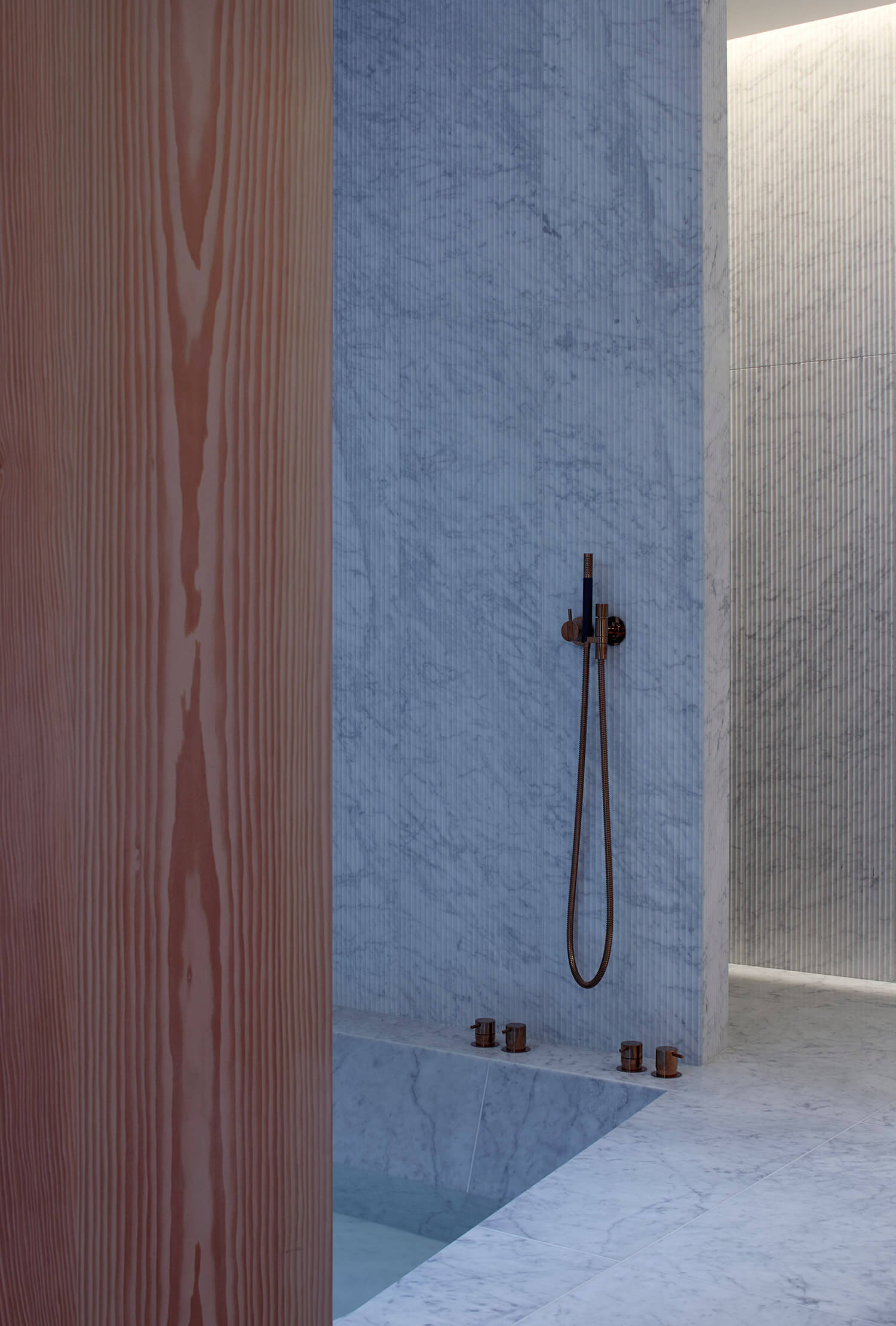 Inside the house, the material palette is restrained but subtly audacious. Carrara marble was used for the outdoor terraces and sunken courtyard gardens as well as the wet areas (the pool, the bathrooms, a steam room), while the bedrooms and living spaces are lined with long, beautifully grained Douglas fir planks whose joins are almost impossible to discern.

The custom kitchen, meanwhile, is clad in shimmering copper coated to prevent marking, while storage and service units, as well as the lower staircase, are made out of stainless steel. Perhaps surprisingly, the floating double-sided wardrobe and TV-fireplace unit in the master bedroom also made out of steel. “Stainless steel is very calming,” Botsford maintains. “And we didn’t want to overwhelm the interiors with copper or wood.” 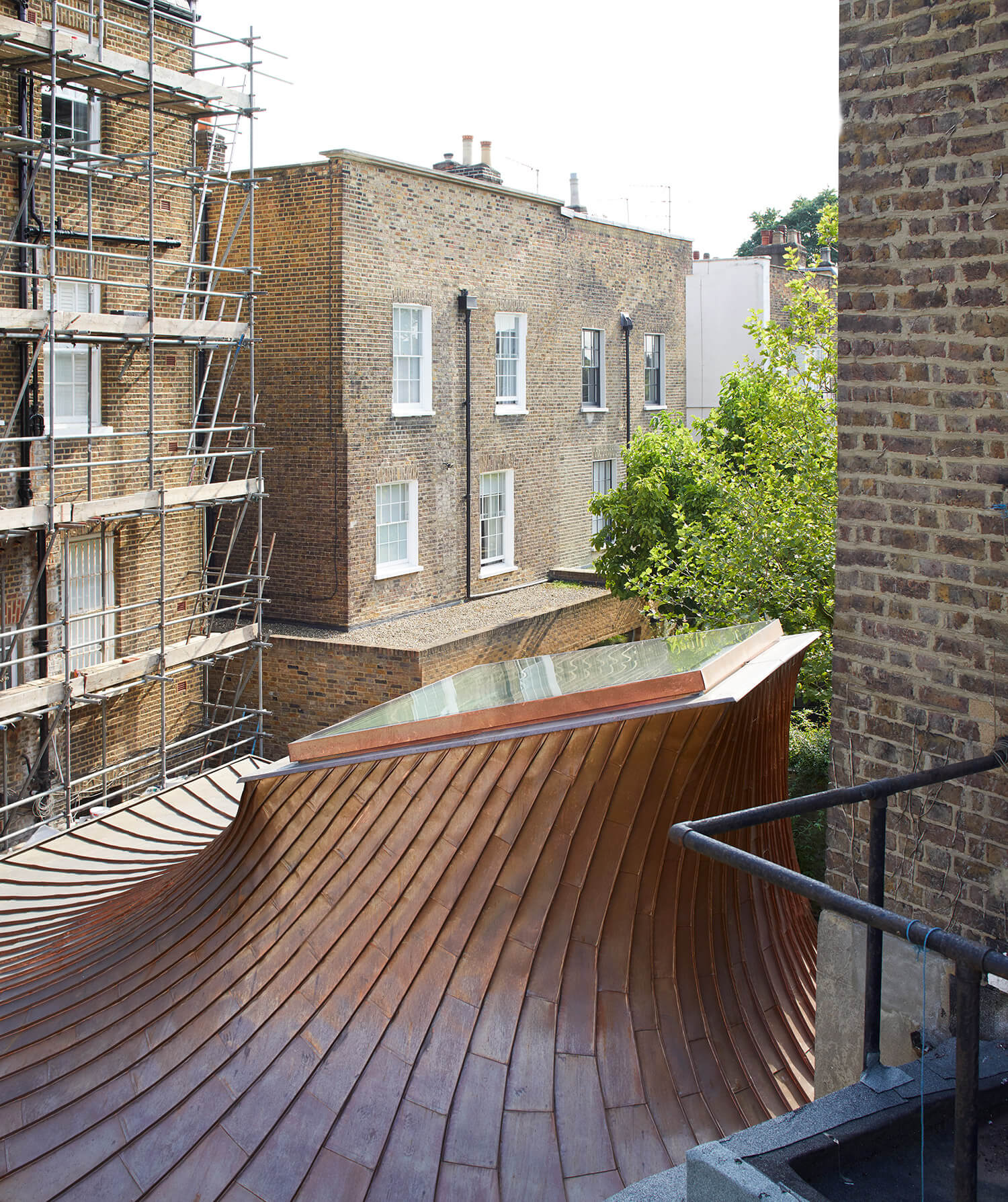 The opulence of all these materials is offset by the lightness of two suspended staircases that appear almost to float off the walls, while the diminutive outdoor spaces filled with greenery by Todd Longstaffe-Gowan bring the outside indoors and, on the ground floor, encourage views upward through the living room windows.

The result is transporting: When you are in or around the house, you are completely unaware of the surrounding buildings. “The focus,” says Botsford, “is all on looking east and west, through the gardens into the sky.” In other words, the House in a Garden may sit on a tight and shadowy site, but it feels very much like an oasis in the city. giannibotsford.com

Capped by a dramatic copper roof, the multi-level house on the site of a former London garden offers sanctuary and serenity in the bustling city.