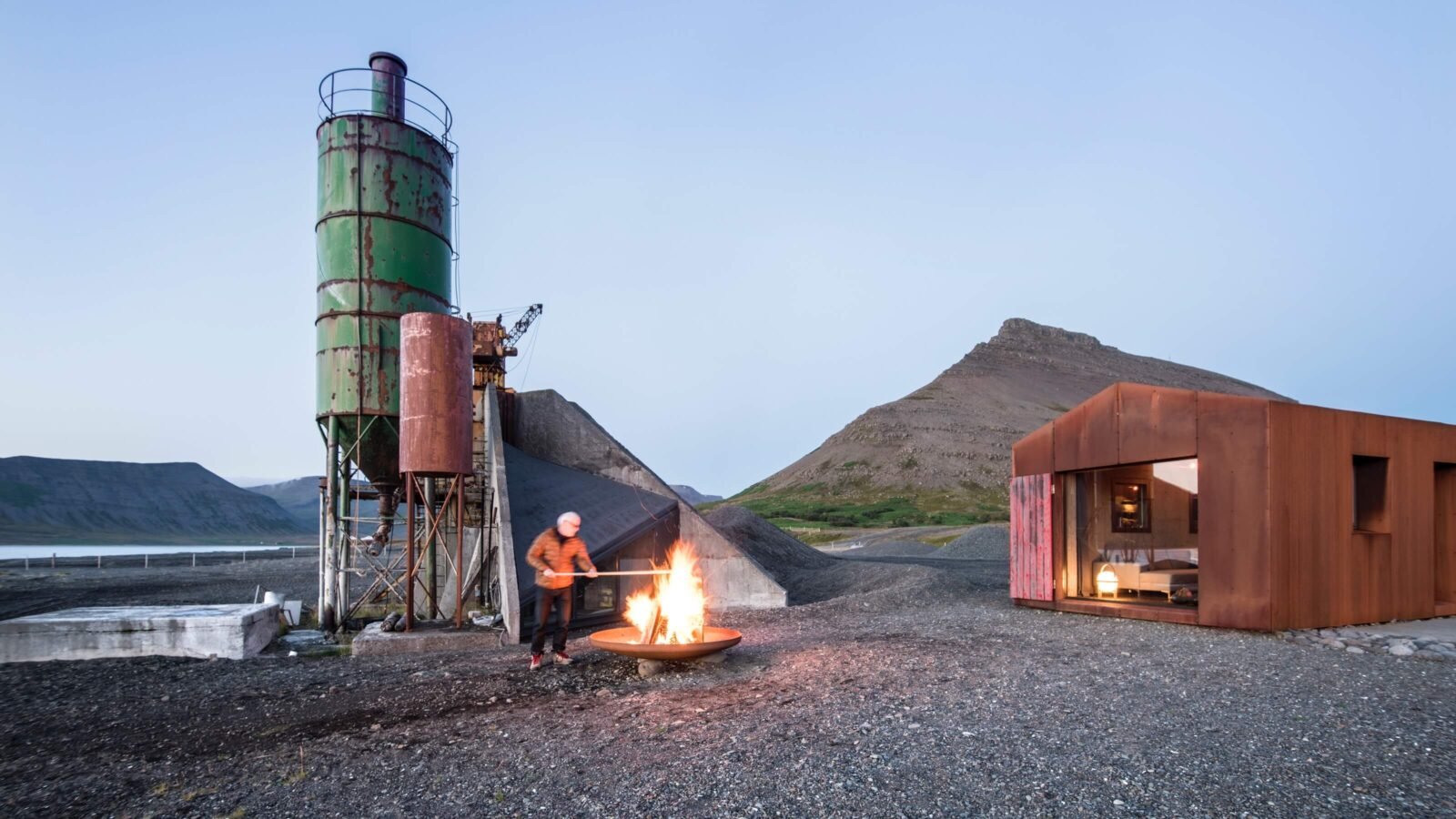 Pálmar Kristmundsson still remembers his fisherman father’s final attempt to make a sailor out of him. “He took me out in his boat,” recalls the Icelandic architect, now in his sixties. “We were not even out of the fjord when I started to vomit. He turned the boat around, threw me on the pier and said, ‘You will never become a sailor.’ And he left me there.”

If his father’s assessment ever stung, Kristmundsson is over it. At the age of 17, he left his home village of Thingeyri to study architecture, first in Denmark and then in Japan. In 1985, he founded the Reykjavik architecture and design studio , which has become renowned for projects ranging from holiday cottages in Brekkuskógur (winners of a 2016 AZ Award of Merit) to the headquarters of Icelandic pharmaceutical company Alvogen (which cleverly combines a glass facade with raw concrete inserts). Over this period, the tiny community in which he was raised has always drawn him back – so much so that, at the first opportunity, Kristmundsson returned to Thingeyri and the sandy beach of Dýrafjörður to build a getaway studio.

That occasion came in 1998, when the village’s concrete factory went bankrupt. Located near the shore, the pinwheel-shaped factory and the pitched-roof shed that housed its generator were erected by fishermen, carpenters and workers to mix concrete, made with beach gravel, for the town’s infrastructure projects, including a bridge over the fjord. The fact that it was no longer of use by the turn of the millennium underscored a larger problem: Thingeyri, located in one of the remotest, northernmost regions of Iceland, was on the verge of collapse, its population having declined from about 400 people when Kristmundsson was growing up to 200 or so today. Nonetheless, the factory structures inspired him to reimagine them, even if the locals thought he was crazy to take them on. “There is a saying in Iceland: When you’re doing something totally stupid, you’re pouring concrete,” Kristmundsson says, noting a particularly apt metaphor.

The perfection of the allusion didn’t daunt him. The first thing that Kristmundsson did, apart from fencing off the property to protect it from roaming sheep, was to reclaim the pitched-roof shed. Built with concrete walls and a timber roof, the shed was small, raw and uninsulated. Kristmundsson wrapped it in insulation and clad it in a steel grate that would weather well in the harsh climate. He also ripped out the generator, laid down an electric floor-heating system and mixed gravel from the beach with epoxy to create a new floor. In the process, Kristmundsson significantly expanded the structure’s footprint, approximately tripling it in length. He also cut new openings into the shed, including one that faces the mouth of the fjord, so that he and his wife can enjoy the remarkable sunsets. To protect the glass (and the view) from sand blasts, he installed a folding shutter made of the rawest wood he could find.

For many, such a makeover would likely include a wholesale reinterpretation of the site, but Kristmundsson has kept the existing structures – such as the dilapidated mixing tower – intact. He has even incorporated some historical remnants into his design. Raw concrete steps that lead up to the shed-turned-cabin, for instance, were salvaged from a foundation used to support the massive fish-drying racks that once sat on the shore. And rather than tear down the factory, consisting of three spaces separated by concrete walls, Kristmundsson has been making use of its massive shell, creating two bedrooms for visiting family and planning an artist’s studio in the third space. 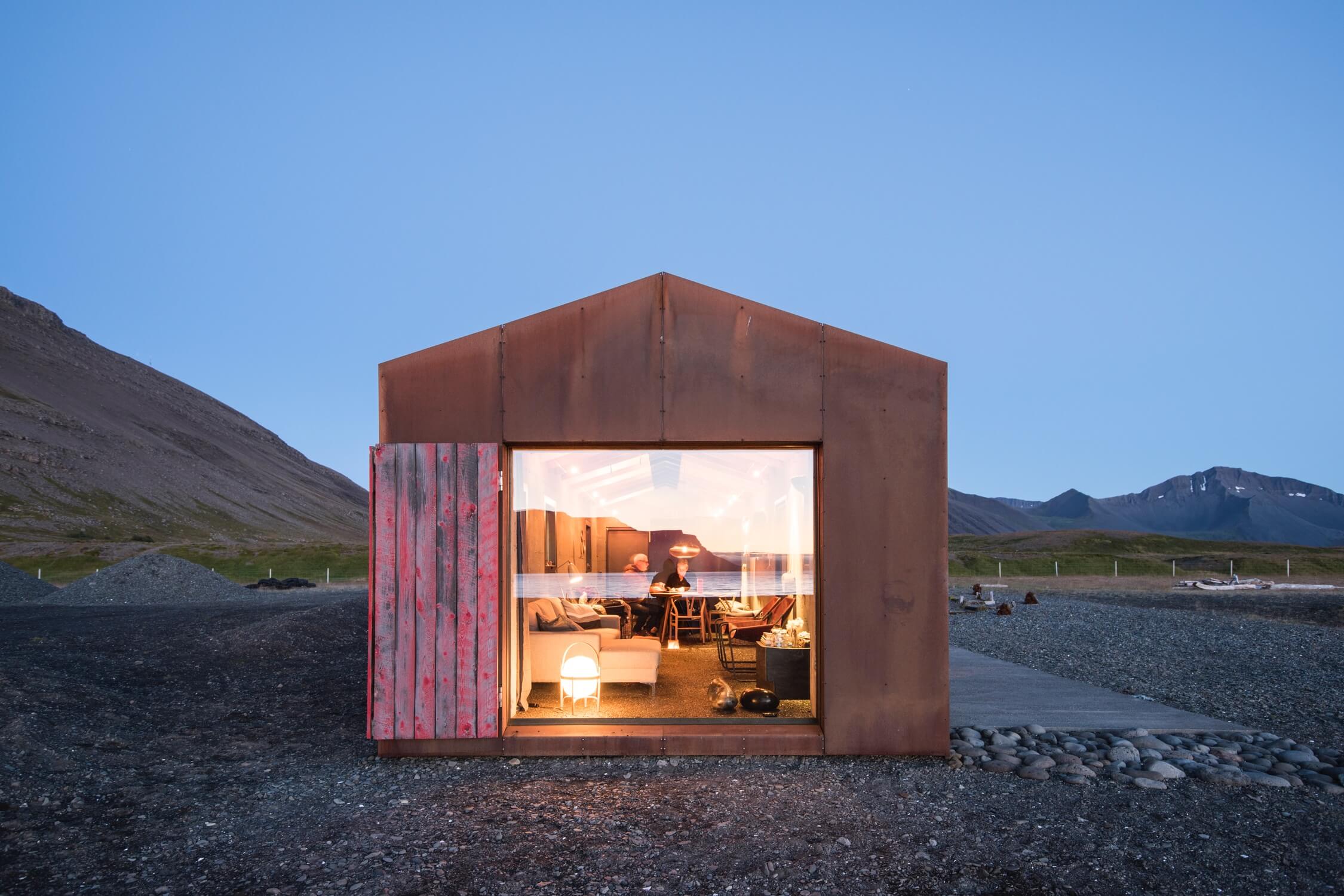 In the process, Kristmundsson has become an influential part of the community, fighting for its voice to be heard after its amalgamation with three other villages and working with locals to transform Thingeyri into a cultural destination. Besides the concrete factory, Kristmundsson is renovating a house in town for his kids and refurbishing his father’s old fishing storehouse. He is also working with villagers and friends abroad to envision – and raise funds and political support for – new public places, from an open structure he’s designing to frame perfect views of the sunset to a pavilion that a Japanese colleague is hoping to fashion from an old oil tank.

All of this will take time; building in the area is tough, with Kristmundsson having to fly in engineers, suppliers workers for a week or so at a time in order to get jobs done in an efficient manner. “I don’t know if I will ever finish it,” Kristmundsson muses. “But that’s not a huge pressure on me. I just hope I will get more and more time to be there and to work on it. It’s not really an issue whether things are finished or not.” pkdm.is