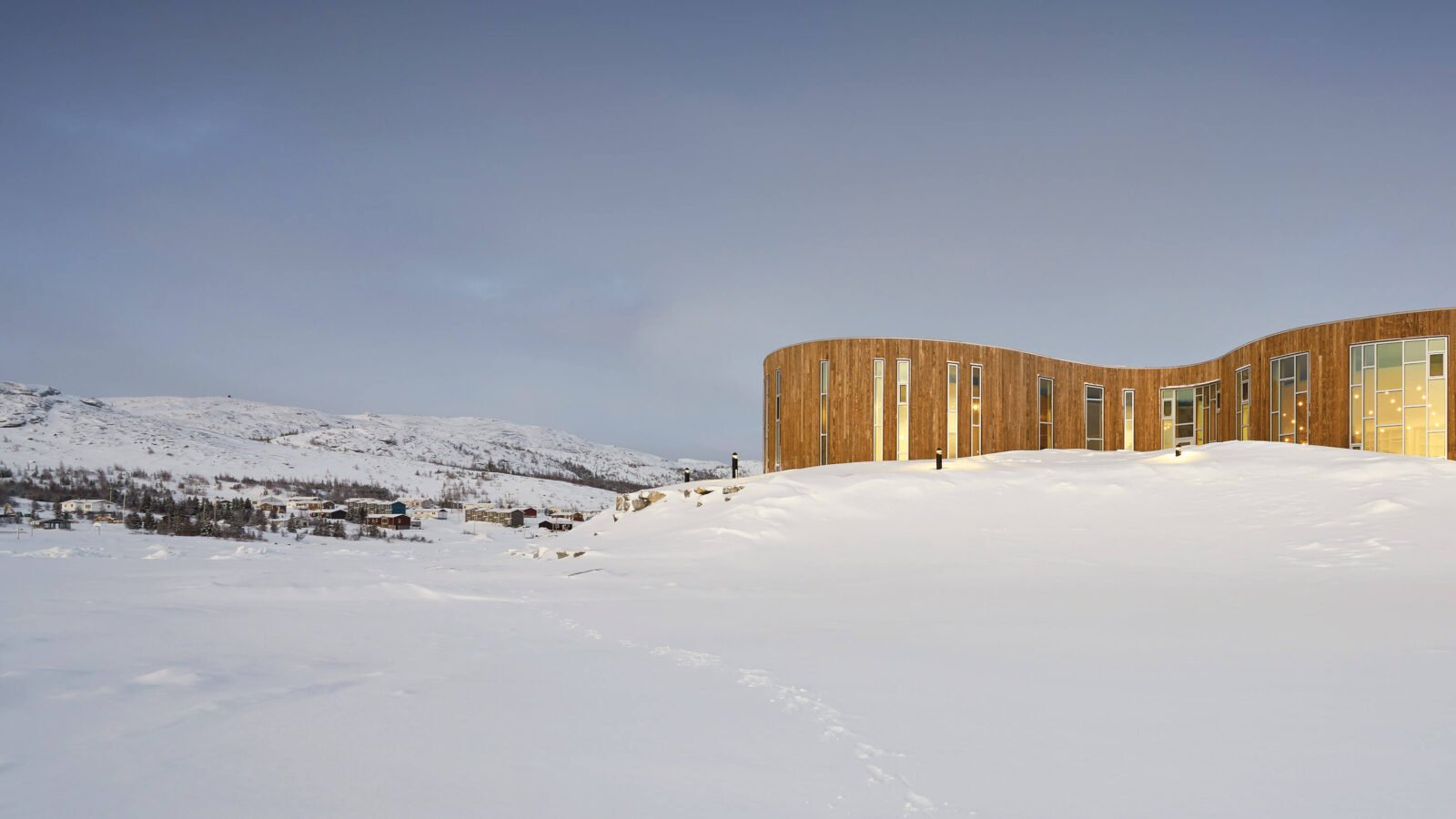 The Warm and Winding Illusuak Cultural Centre in Labrador

Celebrating everything Inuit in an organic, softly curved building by architect Todd Saunders, the cultural centre is envisioned as a living room.

Whether you arrive in Nain by plane or by boat, it only takes a quick glance to understand that there’s something different about this hamlet on the Labrador Sea. On the rocky shore stands a structure that looks nothing like the uniform rectangles that make up the offices, homes stores here. Its undulating walls seem to dazzle – the northern lights rendered in weathering wood. Overlooking the swell where, long ago, Inuit hunters paddled their kayaks, this is the Cultural Centre.

Designed by Todd Saunders of Saunders Architecture, the has already become a hearth around which the 1,125 or so inhabitants of Nain can meet. More broadly, it’s a space built by and for the people of Nunatsiavut, the self-governing region of the Labrador Inuit for which Nain serves as the administrative capital. During its decades-long struggle to successfully settle a land claim, which it did in 2005, Canada’s southernmost Inuit population was also laying the groundwork for a regional hub to elevate Inuit achievement and revive traditions and skills lost as a result of colonization. So the Nunatsiavut government wanted more than just a building – it wanted a symbol of a cultural revival. After inviting architects to submit proposals, it selected Canadian-born Saunders and his Norway-based firm.

“On Rose Island, I saw remnants of organically shaped sod houses set into the ground. The design I presented to the community was free-flowing, round and inclusive” 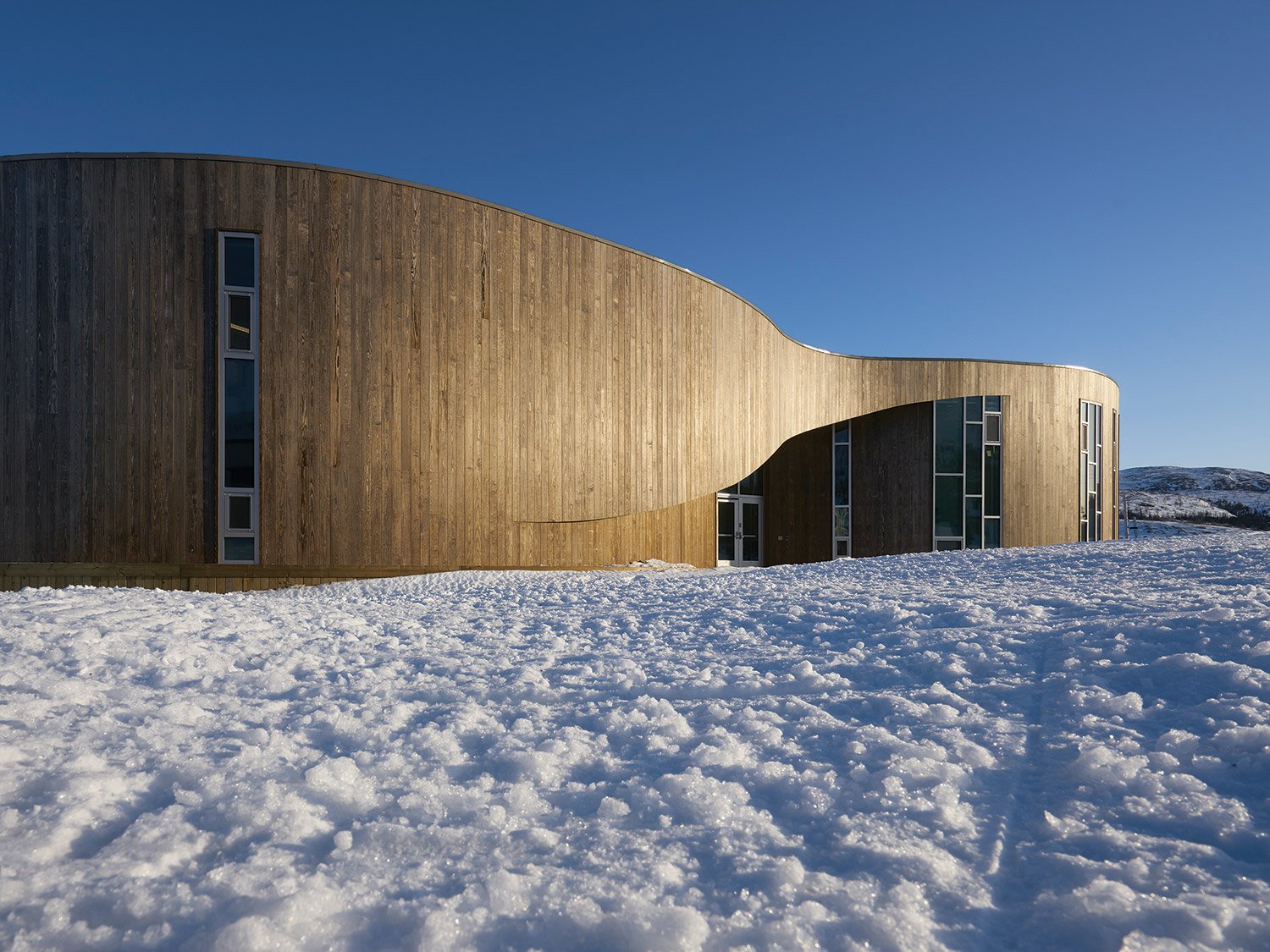 The Illusuak Cultural Centre’s Kebony Clear cladding peels back at the entrance, its tall windows bringing in mountain views.

Before granting him the contract, the Nunatsiavut government asked why he was interested in designing in northern Labrador. The architect behind Fogo Island Inn wanted to continue working in his home province, but he also had a deeper connection to the region. “My great-great-grandfather was a fur trapper there. He spoke Inuktitut and was married to a Mi’kmaq woman,” Saunders explains.

This personal history created trust. And before the design process started, Saunders also spent three weeks fishing and hunting with the Inuit, hiking with scientists in Torngat Mountains National Park and meeting with people in Nain. “What I realized in Nain was that people met privately in one another’s homes; they had no common gathering place, so I conceived Illusuak as a living room,” he says. A living room to showcase artifacts, art and photography, to stage plays and screen films and to host language classes and serve regional foods, it would be a space where Inuit could see and be seen. 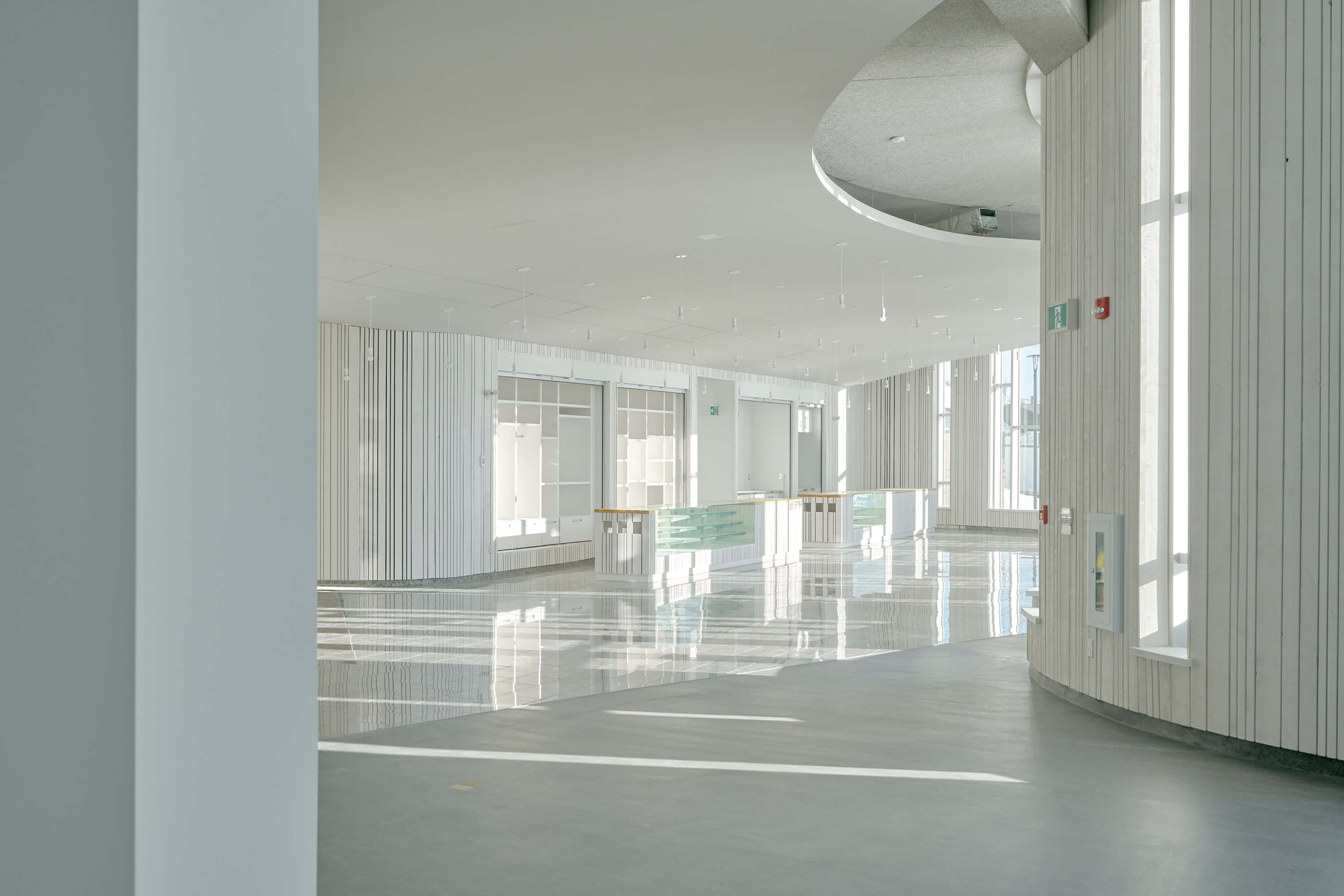 The interior spaces include a theatre, a café and a craft shop – all with carved timber panelling and stone floors.

One obvious obstacle to building in such a remote community was the lack of road access; all materials had to be brought in by ship or barge. Add to that the permafrost, the short construction season (winter can last for eight months) and the severe climate (Nain is Subarctic, but its climate is similar to that of the Arctic). And because the government selected a shoreline site potentially subject to flooding, the structure had to be erected on pillars concealed in rock layers and tall enough to rise above a 100-year flood. 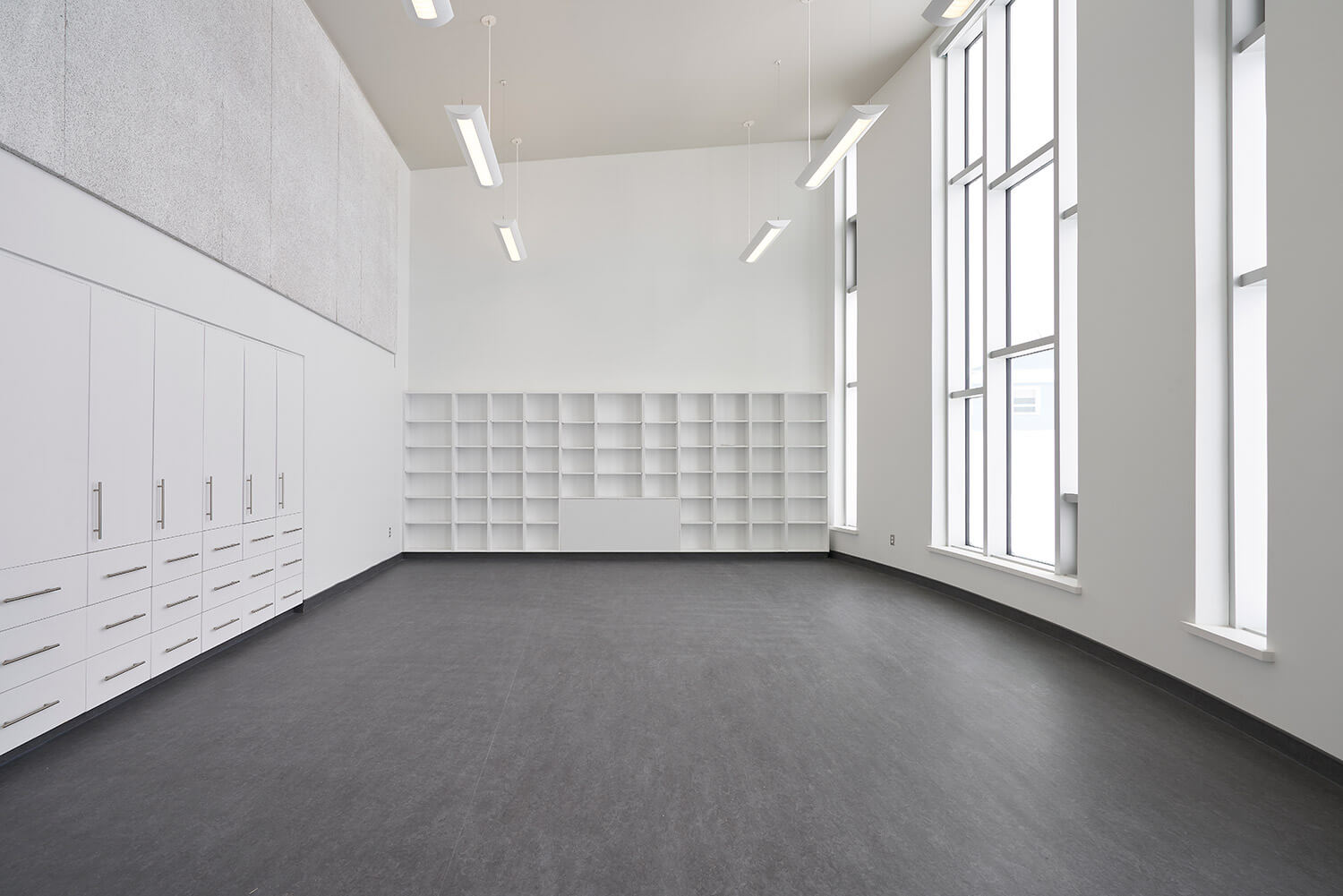 The biggest challenge, though, was how to design for a culture that traditionally didn’t have permanent structures. “The Labrador Inuit were semi-nomadic, so there was no architectural precedent. The Moravian missionaries had built houses and a church, but drawing on that felt wrong,” says Saunders. The answer came after he visited Rose Island, a historically significant fishing camp and burial site. “On Rose Island, I saw the remnants of these organically shaped sod houses set into the ground. One of the three designs I presented to the community was free-flowing, round and inclusive,” he says. “They went for this soft design.” 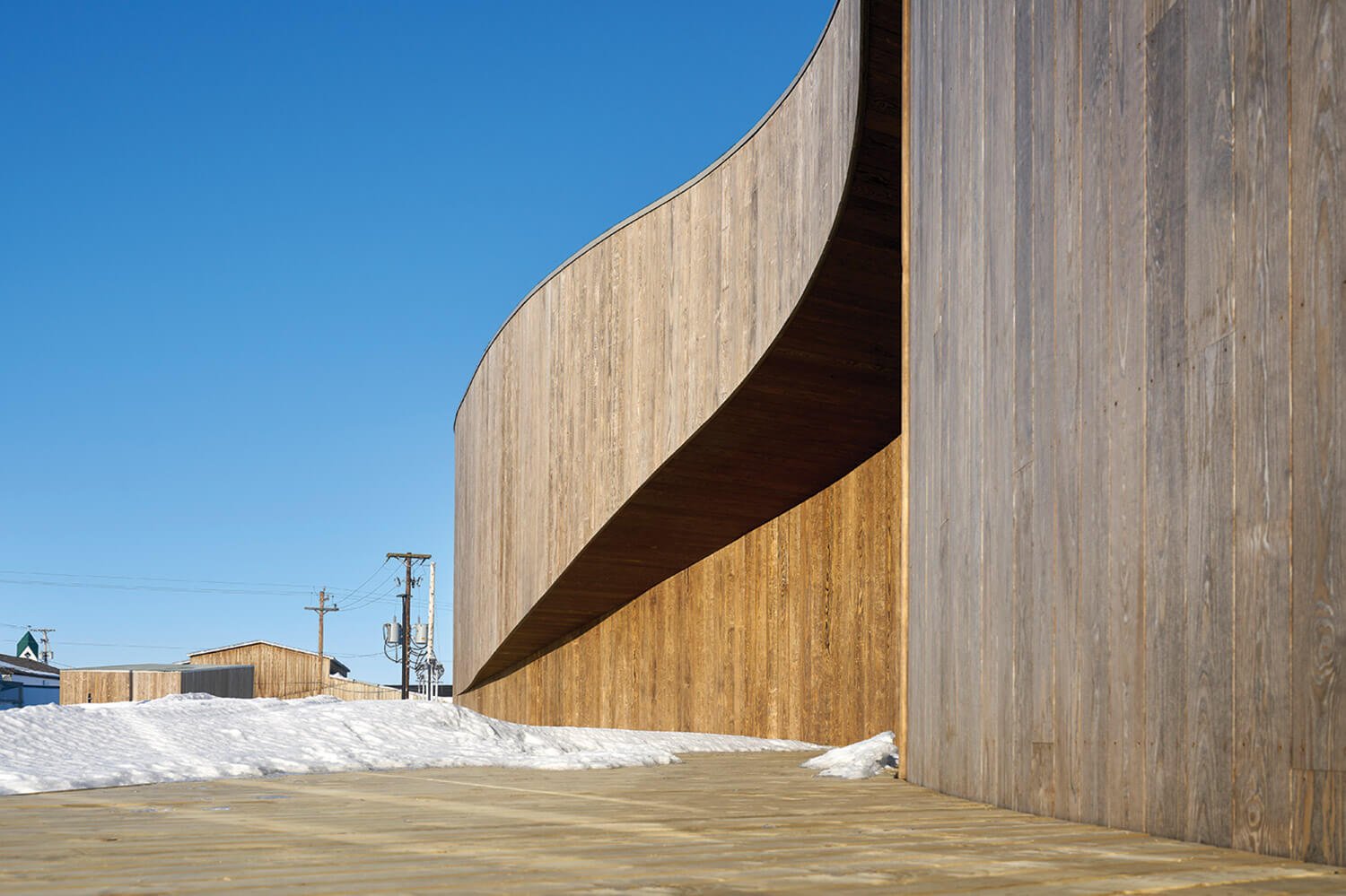 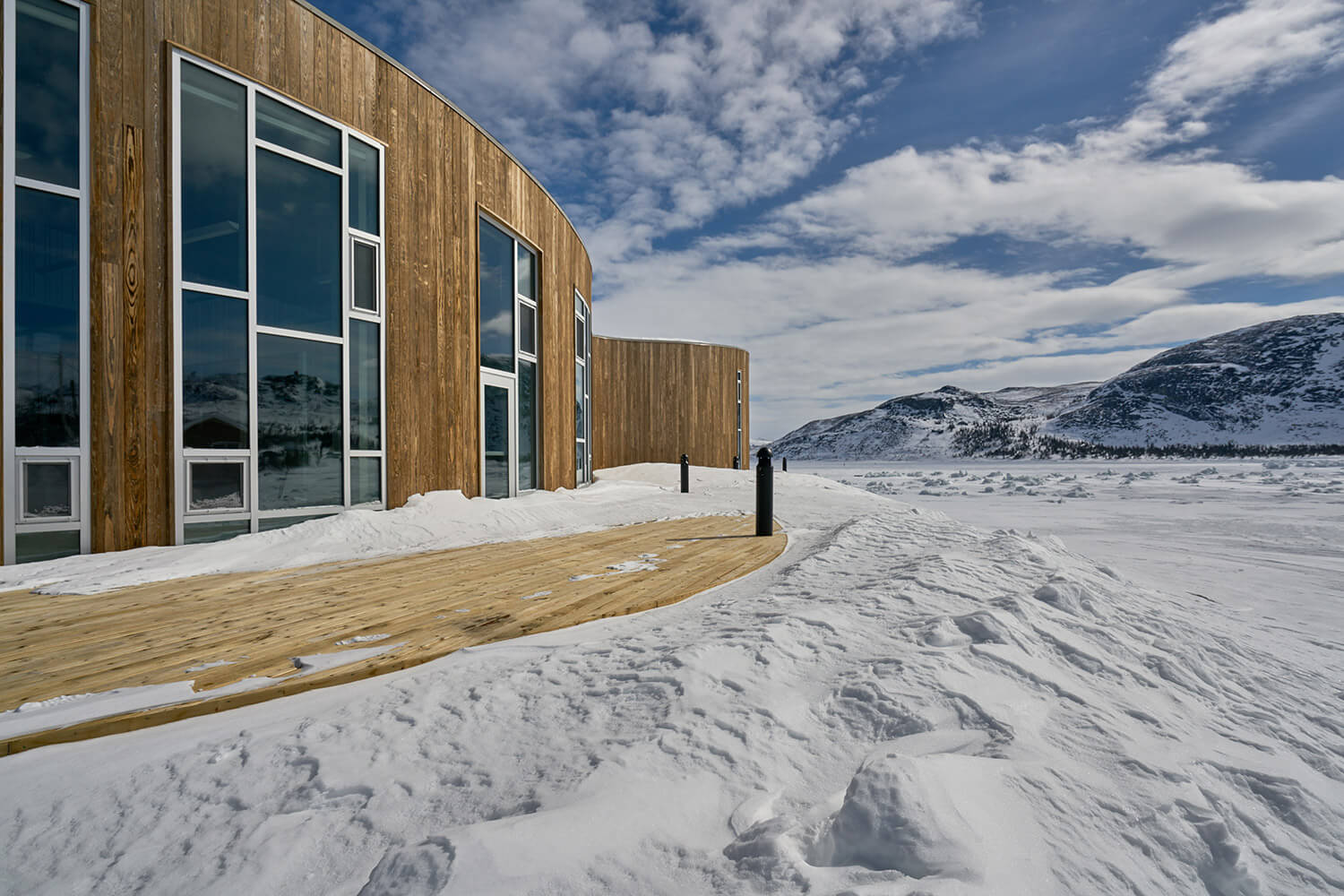 The 1,200-square-metre cultural centre is different from anything Saunders has done before. Its wavy footprint seems to dance with the shoreline of Unity Bay. In doing so, it two-steps away from the linear language that has made Saunders’ firm a go-to for many European clients. From above, the structure evokes a clover leaf; at grade, the oscillating outline offers a stark contrast to the utilitarian building typology seen in northern communities. On the hermetic north side, the entrance appears as if peeled seamlessly from the exterior, which is clad in Kebony wood that will eventually weather to a grey that melds with the surrounding rockscape. Inside, the exhibition space, auditorium, offices and nooks for meeting and sharing are swaddled in white panelling and drenched with natural light from tall, south-facing windows. Nunatsiavut has gained a permanent home for celebrating and showcasing its centuries-old semi-nomadic culture, or as Saunders puts it, “a fireplace that draws people in.”

Celebrating everything Inuit in an organic, softly curved building by architect Todd Saunders, the cultural centre is envisioned as a living room.