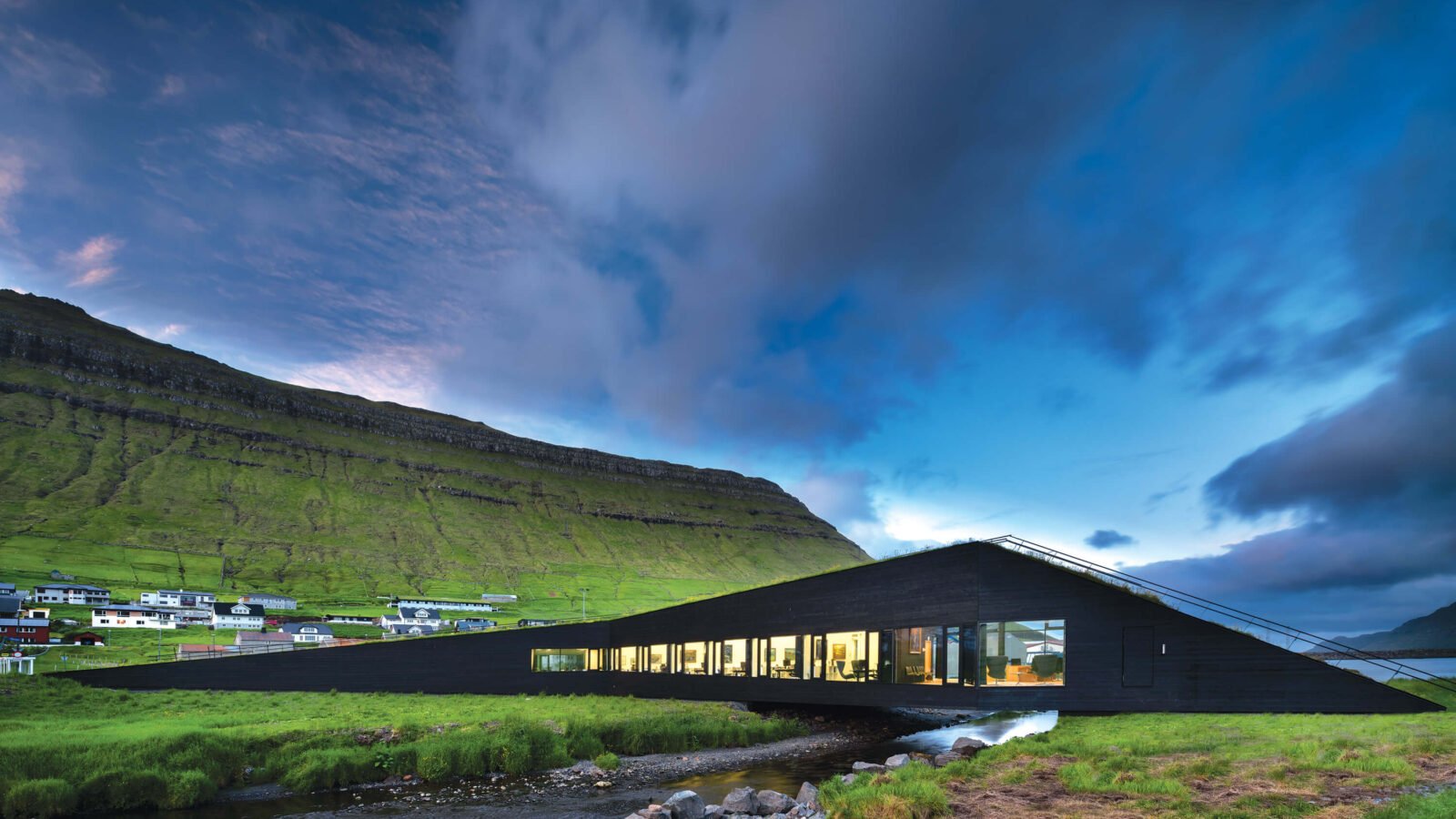 With its grassy roof and sleek prismatic form, a town hall-cum-pedestrian bridge in the remote Faroe Islands both nods to and expands the local architectural vernacular

In 2018, the municipality of Eysturkommuna, in the Faroe Islands, became the second region in the country to get its own town hall. Normally, Faroese councils convene in repurposed buildings, such as old schoolhouses, but in this five-town, 2,100-person district, which came into existence via a 2009 amalgamation, the citizens envisioned something better. Faroese building culture tends toward modesty; the residents of Eysturkommuna wanted to
do what nobody else had done.

Jóhan Christiansen, the municipality’s first and only mayor, says that the goal was also to recreate a former hub in the town of Norðragøta, once home to an expansive beachfront. In the 1960s, though, a fish processing facility set up shop and turned the beach into a landfill. “We can’t go back in time and destroy the factory,” says Christiansen, “so we said, ‘Let’s build something new that will make people proud.’ ”

“Historically, the Faroese have tried to erase the border between landscapes and buildings”

This idea of placemaking through high architecture is common enough in most European countries, but in the Faroe Islands – a self-governing archipelago that’s part of the Kingdom of Denmark – people don’t do such things. According to Ósbjørn Jacobsen, a partner at the Danish firm Henning Larsen and the lead designer on the town hall project, the country is still searching for a contemporary design language.

The building doubles as a pedestrian bridge, its sod-covered roof providing access from one side of a river to the other. 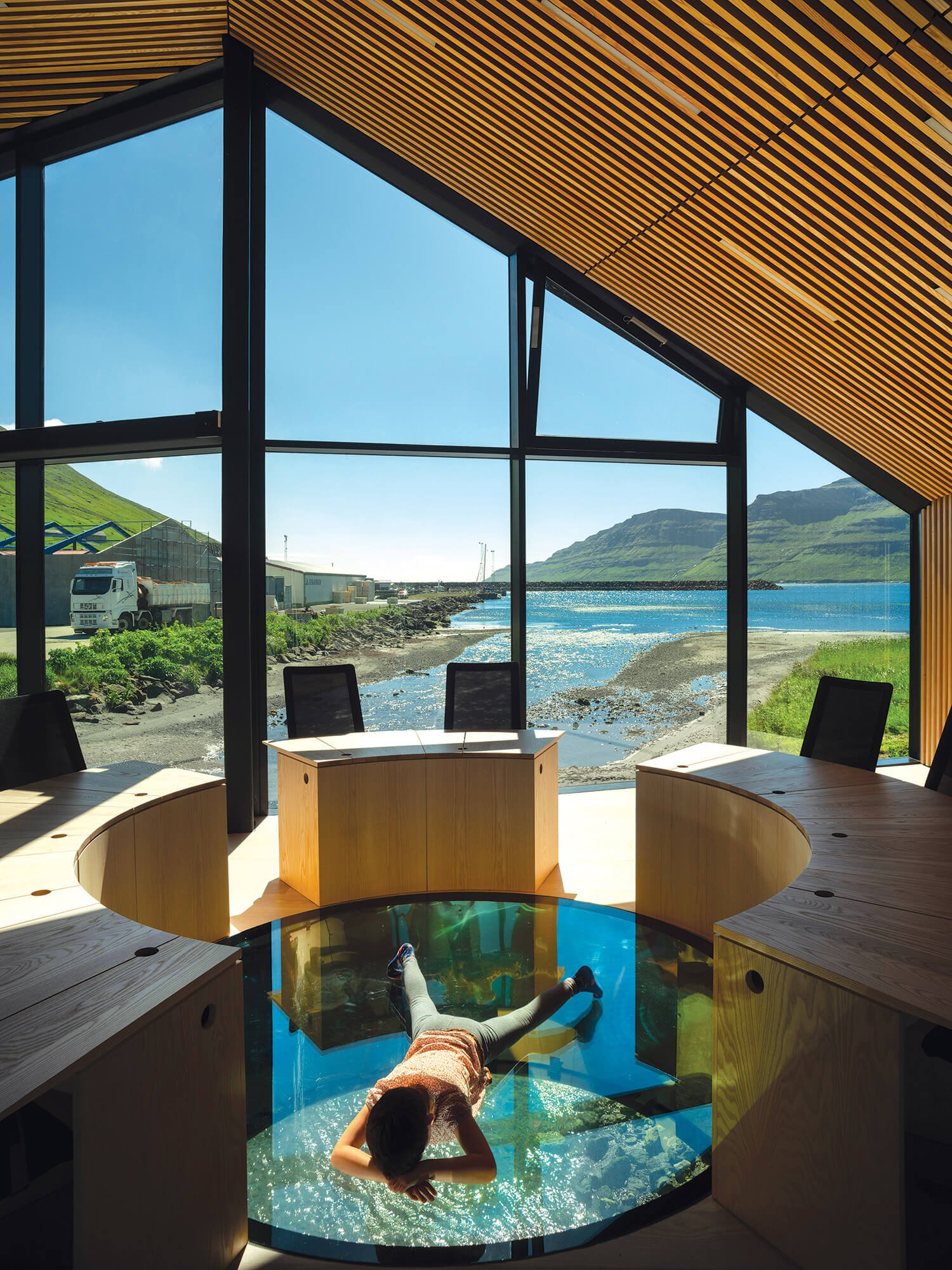 In the council chamber, a polyhedral volume in the widest part of Eysturkommuna’s town hall, politicians convene around a window installed in the floor.

He would know. Jacobsen grew up in what is now Eysturkommuna but eventually left – first for Denmark, to study architecture, and then for Iceland, where he served as design director for one of Henning Larsen’s most acclaimed projects, the Harpa Reykjavik Concert Hall and Conference Centre. In 2011, he returned to his hometown with his wife and three children, establishing the firm’s Faroese practice, Henning Larsen North Atlantic, in 2013. 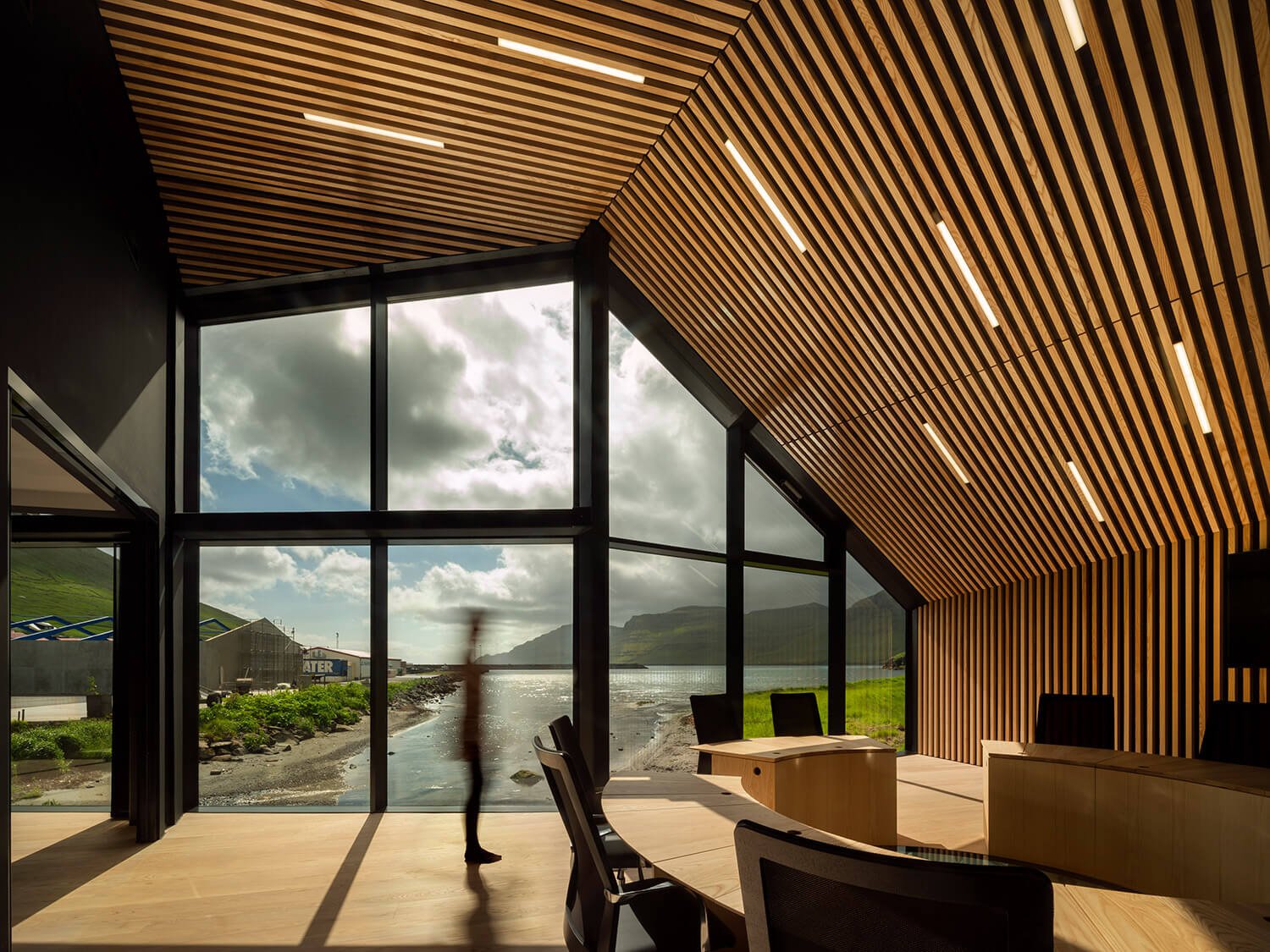 Trained architects may be few and far between on the archipelago, but the region retains a strong folk building tradition rooted in its Viking history. A conventional Faroese house might have a fieldstone exterior, a driftwood interior, tree-bark soffits a sod-covered roof. “Historically, the Faroese have tried to erase the border between landscapes and buildings,” Jacobsen says. “If you look at an old village, you may have difficulty seeing where nature stops and culture starts.” 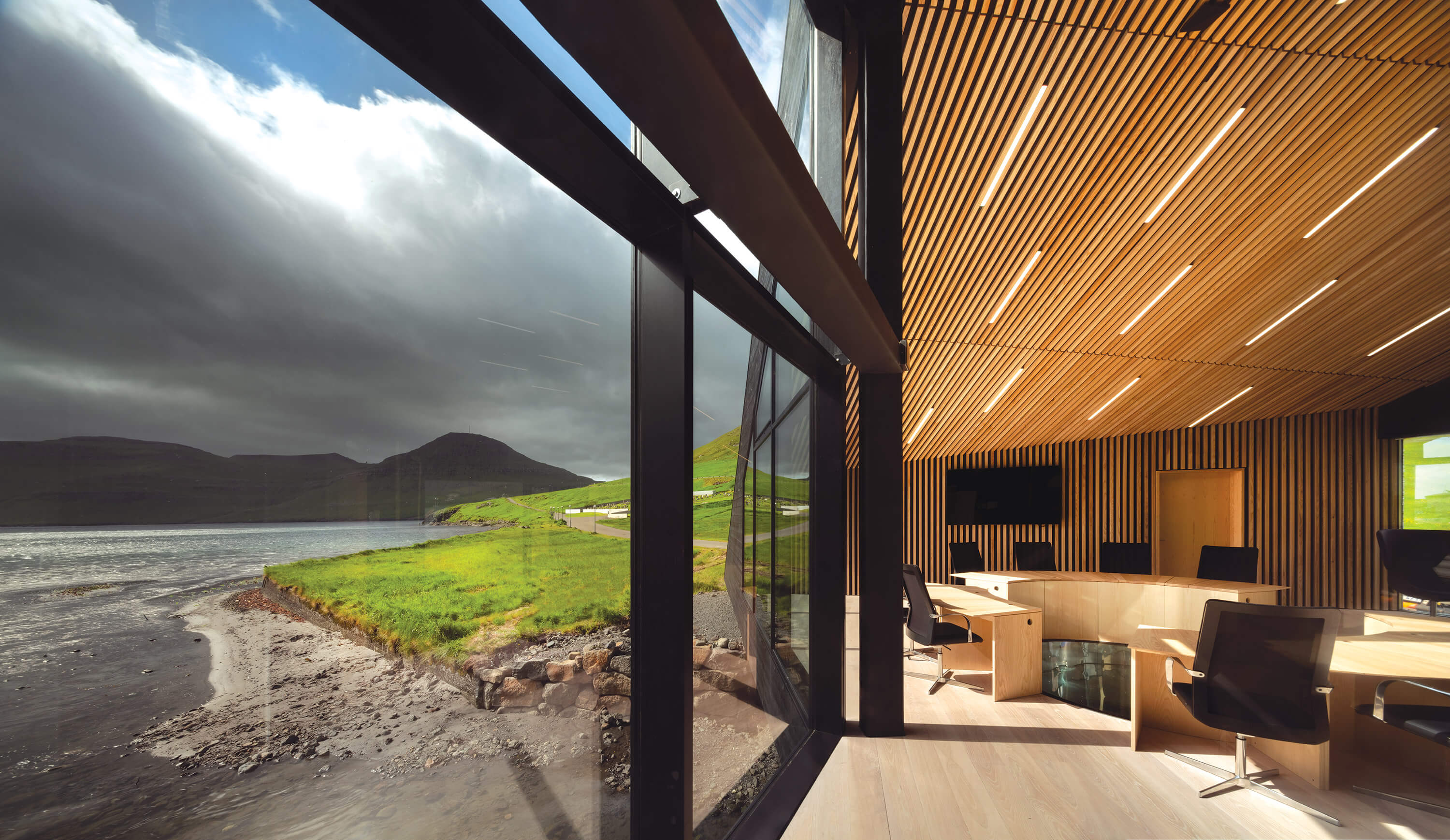 The town hall, Jacobsen decided, would reference this tradition without blatantly imitating it. He also took inspiration from historical locales, such as the Republic of Venice, where the bridges, thanks to their high foot traffic, became nodes of culture, commerce community – exactly what he wanted his town hall to be.

The building actually doubles as a pedestrian bridge, rising from the landscape on the east side of a river, then making a few sharp turns before touching down, lightly, on the opposite bank. Public spaces, including a reception area, a kitchen and a meeting room, face southward toward the sea, while private offices have views of the mountains to the north. Many elements – the wood-panelled interiors, the pine exterior cladding, the grassy roof – evoke Faroese vernacular design. But other features are more in line with international modernism: The overall structure is prismatic and muscular, and, despite the abundance of wood, the town hall has a steel and concrete core. 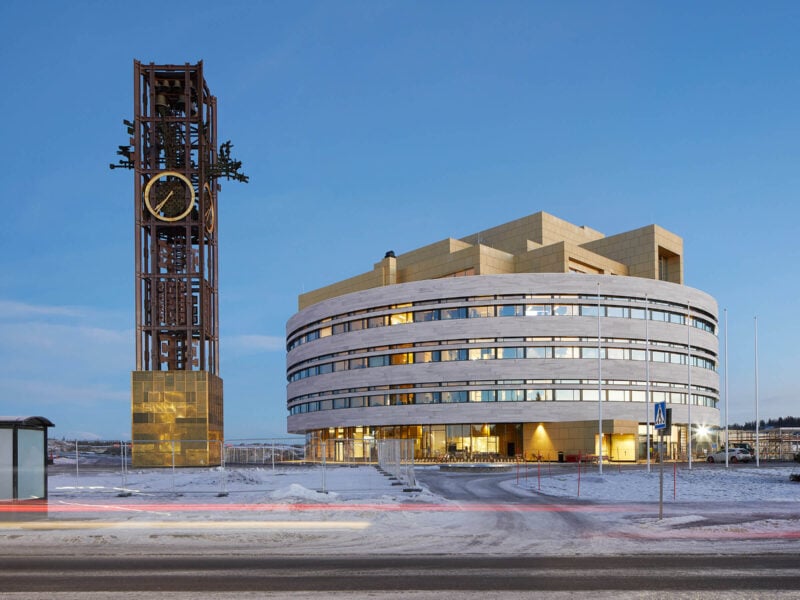 Henning Larsen’s Town Hall for an Uprooted Swedish Village
While Henning Larsen North Atlantic completed a new town hall in the Faroe Islands, the Copenhagen-based home office was fashioning one for Sweden’s northernmost city. The outcome is more than a civic building: It’s the optimistic emblem of an uprooted community
Read More 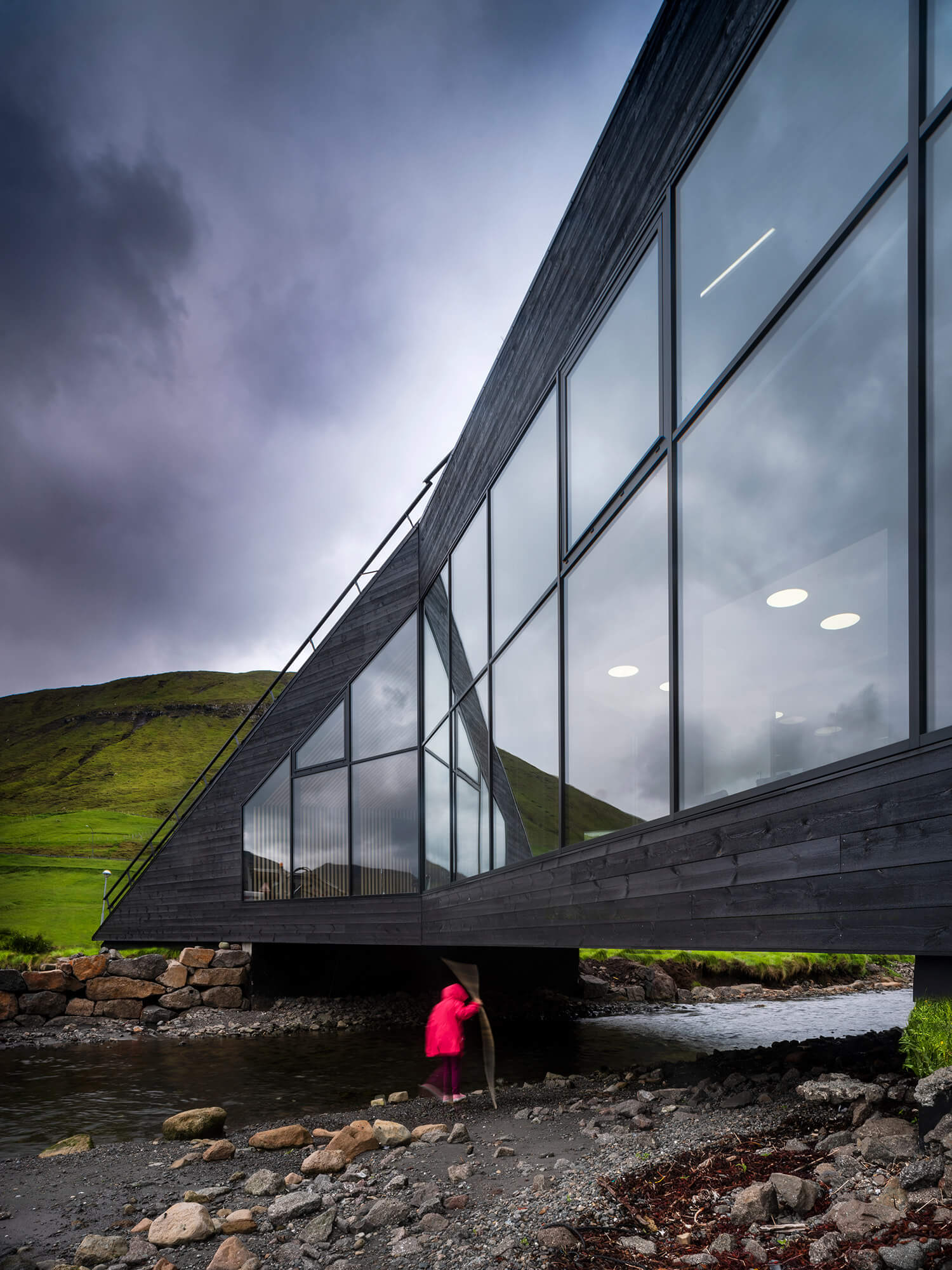 The most important space is the council chamber, a surreal, polyhedral volume in the widest part of the bridge, directly atop the water. During meetings, Christiansen and eight other councillors sit around a circular window installed in the floor, through which they sometimes see trout swimming in the river below. On the underside of the bridge, Jacobsen installed lights that bounce off the water and upward through the glass, giving the room a dramatic, ghostly ambience. 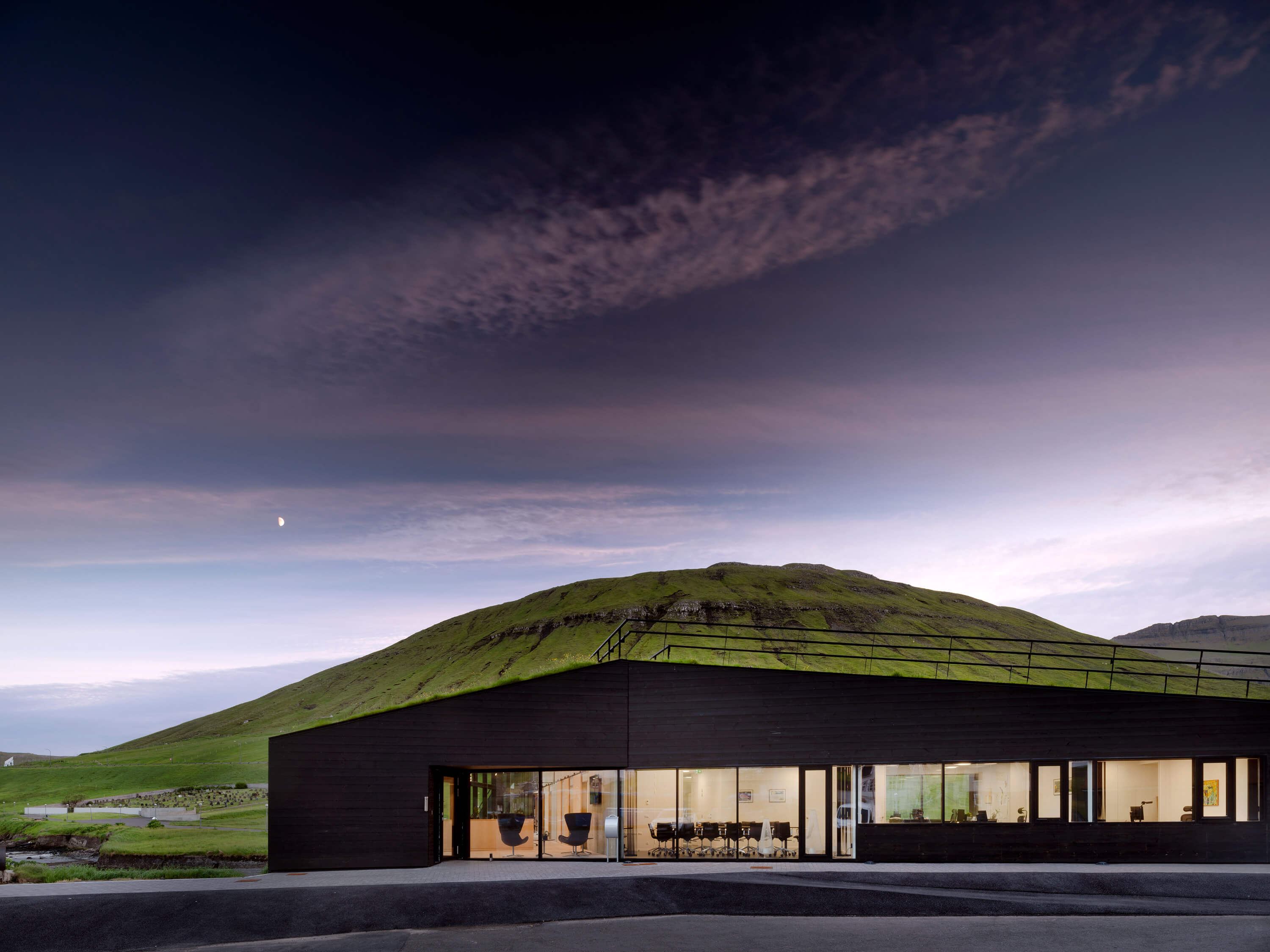 The town hall has been the setting for actual dramas, too. Last fall, Búi Egason Dam, a Faroese theatre director who works under the name Budam, mounted an amateur production of Henrik Ibsen’s realist classic Hedda Gabler at the site. The audience began its journey in the reception area at the east end of the building and eventually crossed the entire span.

In most versions of Ibsen’s text, the violent climax happens offstage, but Budam set this action in the river, which was visible to attendees through Jacobsen’s generous floor-to-ceiling windows. However, it was in the council chamber – a room unlike anything else in the Faroe Islands, devised by an architect committed to bucking tradition and reimagining his country’s design culture – where an actor delivered the incredulous, iconic last line of the play: “People don’t do such things.”

With its grassy roof and sleek prismatic form, a town hall-cum-pedestrian bridge in the remote Faroe Islands both nods to and expands the local architectural vernacular