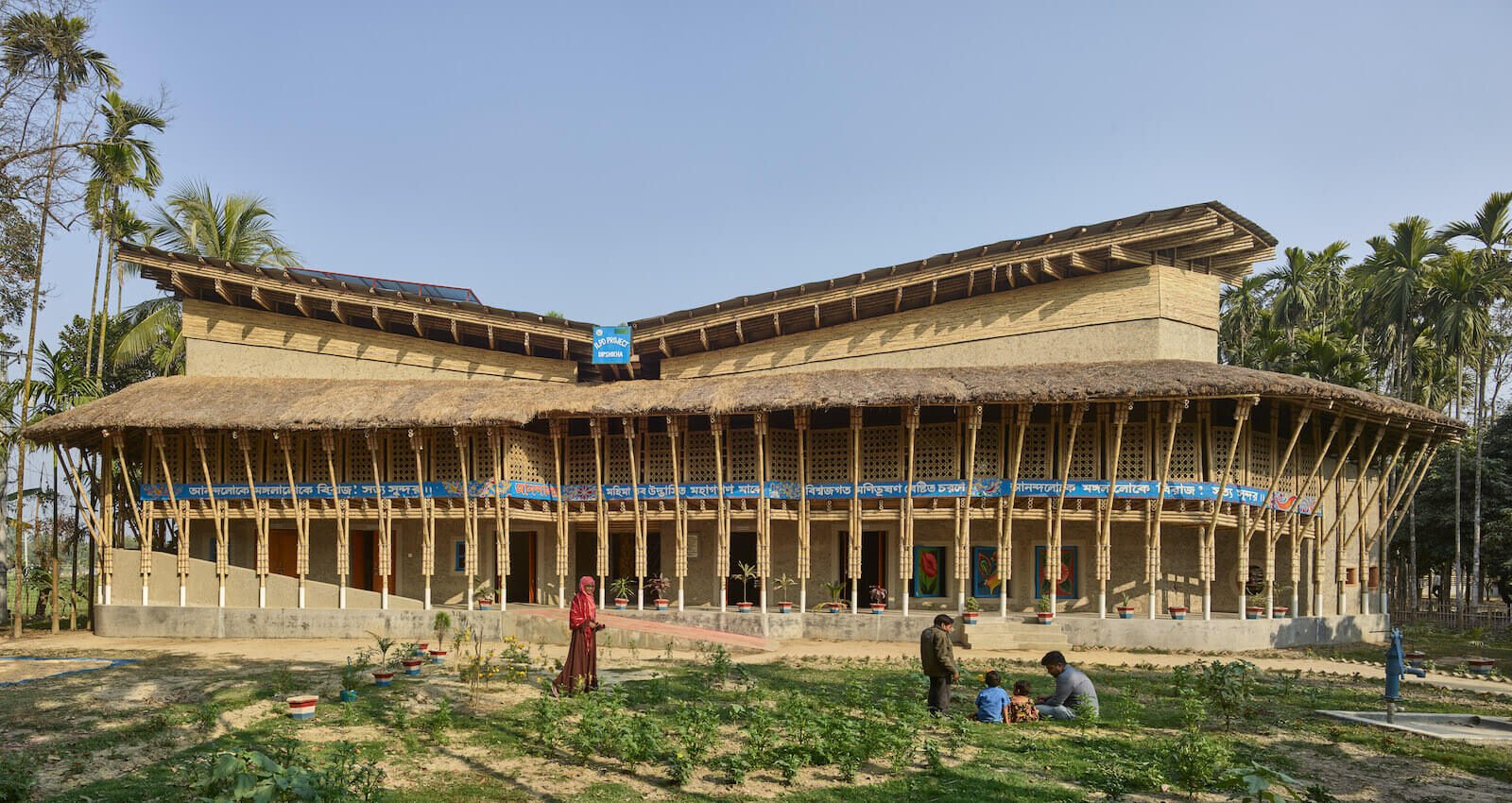 From the Bangla/Bengali dialect, Anandaloy translates to “The Place of Deep Joy.” This meaning manifests in a curved building erected from mud and bamboo — the former an abundant local resource, the latter bought from local formers — in Rudrapur Village, Dinajpur, Bangladesh. It houses a therapy centre for people with disabilities on its ground floor and a textile studio where local women produce fair fashion and art works on the upper storey. Designed by German architect Anna Heringer and brought to life by local workers, Anandaloy just won the 2020 Obel Award, which recognizes the project’s reflection of the theme “mending: creative mending through climate-positive construction or design.”

The plaudit is well-earned. Completed in 2019, the building represents a career-long endeavour of Heringer’s — that of elevating mud and bamboo edifices while engaging end-users in the construction of the architecture that will ultimately belong to them. In the case of Anandaloy, a team of craftspeople from the village, including those with disabilities, were employed in erecting the two-storey, 253-square-metre building, which runs on solar energy. The mud-building technique of “cob” allowed them to cast the structure’s curves without the use of formwork. And the builders also had input into the centre’s aesthetic expression, opting for a Vienna weaving pattern for the facade. 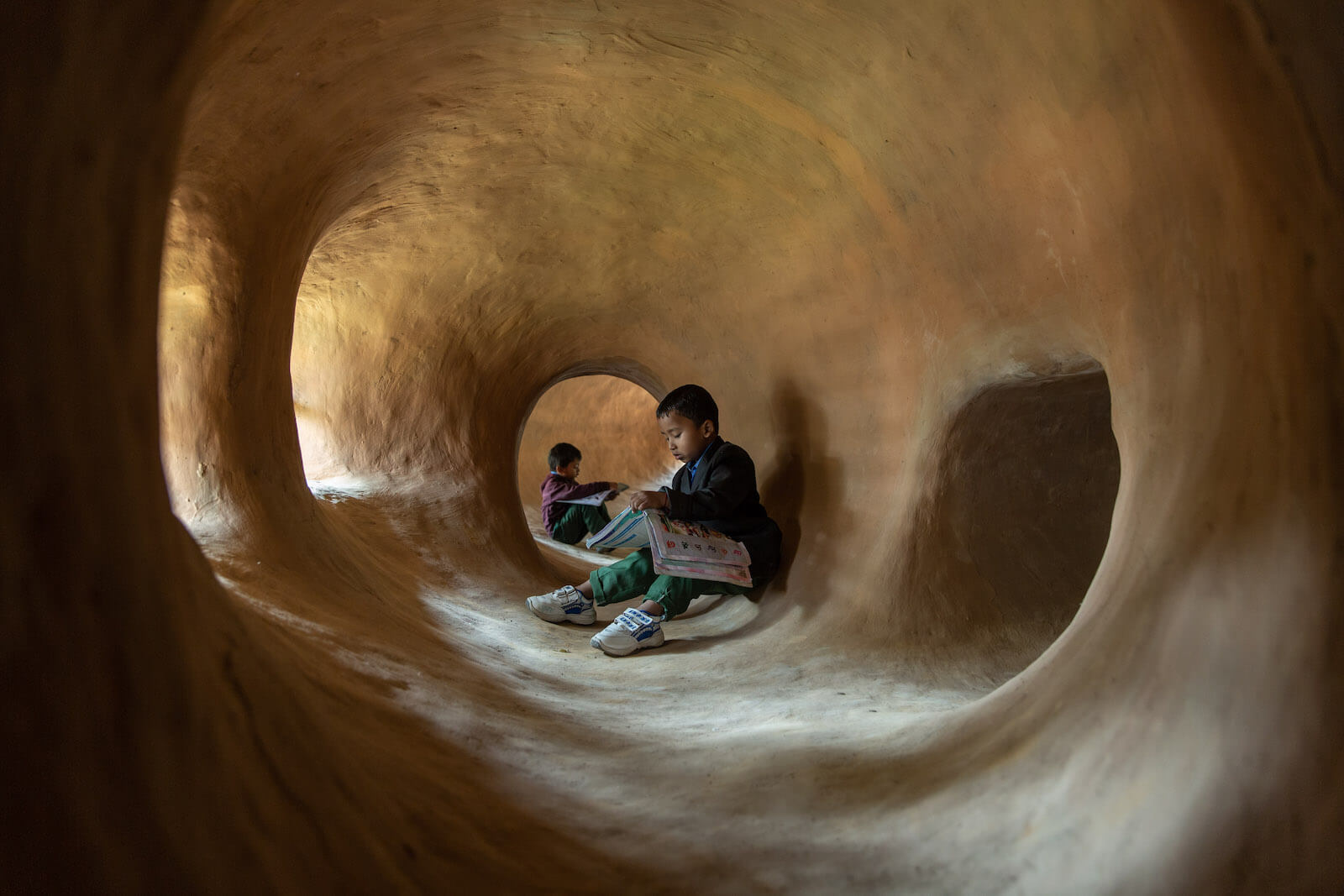 For Heringer, their contribution made possible the creation of a modern project with minimal resources. “Mud is not just dirt — it is a real building material of high quality that you can use to build very exact structures — not only small huts but also large engineering structures and even public buildings,” she says. 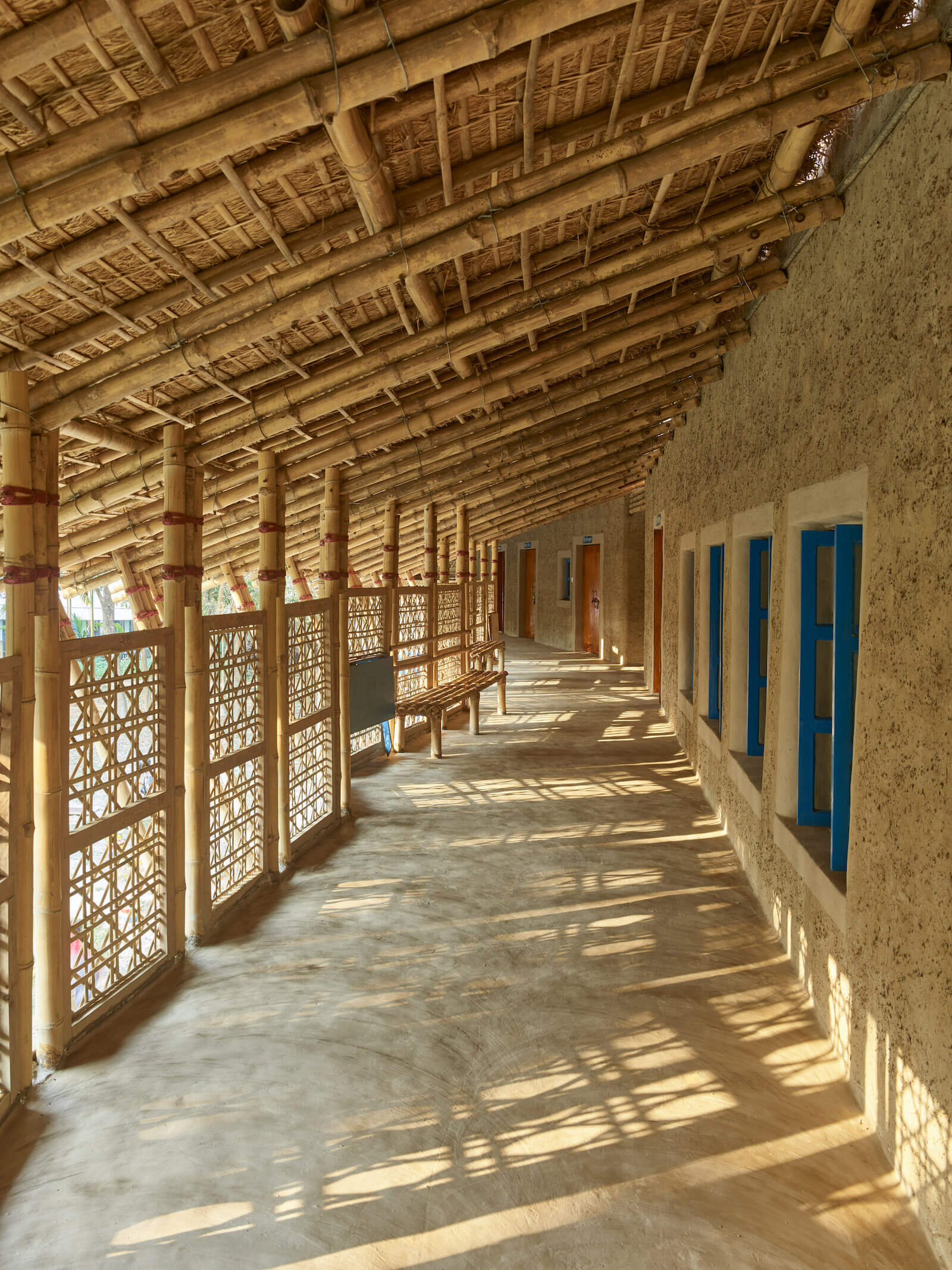 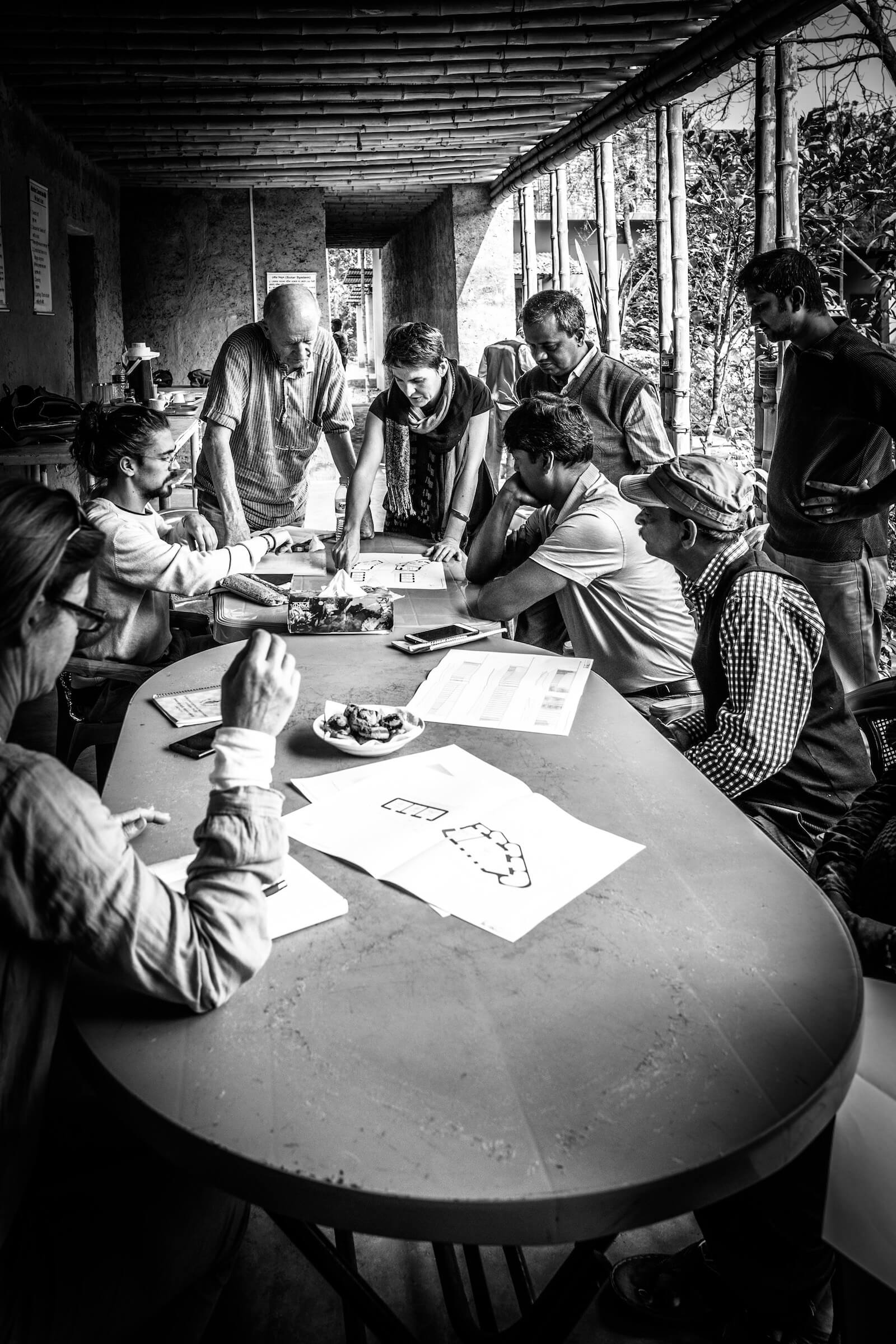 In Bangladesh, having a disability might be seen by one’s larger community as a burden from god or as karma, and as a condition that cannot be remedied. In its design and program, the building deliberately counters this prevailing notion. It provides people with disabilities with a place they can go to for physical therapy and to connect with textile weavers.

The architecture itself also communicates a paradigm shift around ability and disability: “Anandaloy does not follow a simple rectangular layout. Rather, the building is dancing, and dancing with it is the ramp that follows it around. That ramp is essential, because it is the symbol of inclusion,” Heringer explains. “It is the only ramp in the area, and as the most predominant thing about the building, it triggers a lot of questions. In that way, the architecture itself raises awareness of the importance of including everyone. Diversity is something beautiful and something to celebrate,” she adds. 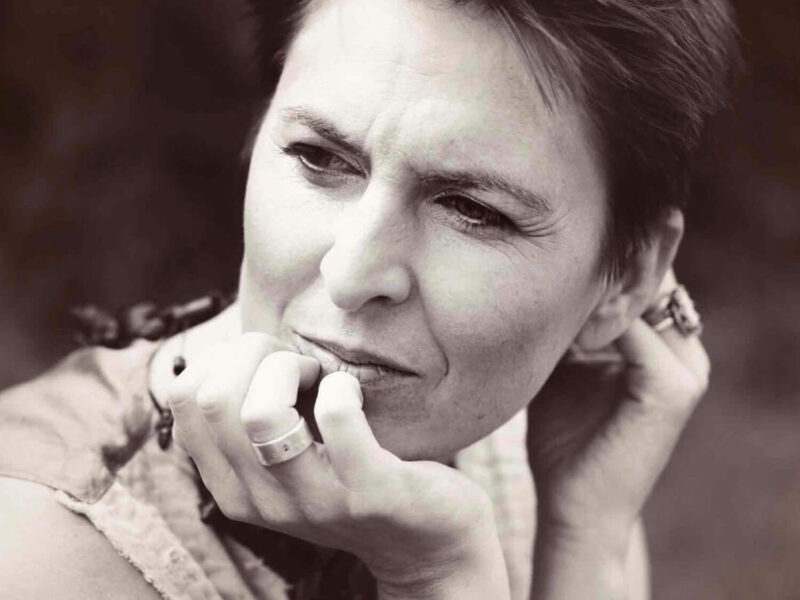 Anna Heringer: Community Builder
Azure catches up with the German architect to talk about the importance of building with one’s hands, investing in local know-how and rehabilitating the image of mud and bamboo architecture.
Read More

Heringer was also involved in programming the second floor: Dipdii Textiles (formerly Didi Textiles), the clothes-making project for local women that she started with Veronika Lang and the NGO Dipshikha (also the building client), runs the textile studio there. The enterprise was conceived to support local textile traditions and improve work opportunities in the village. 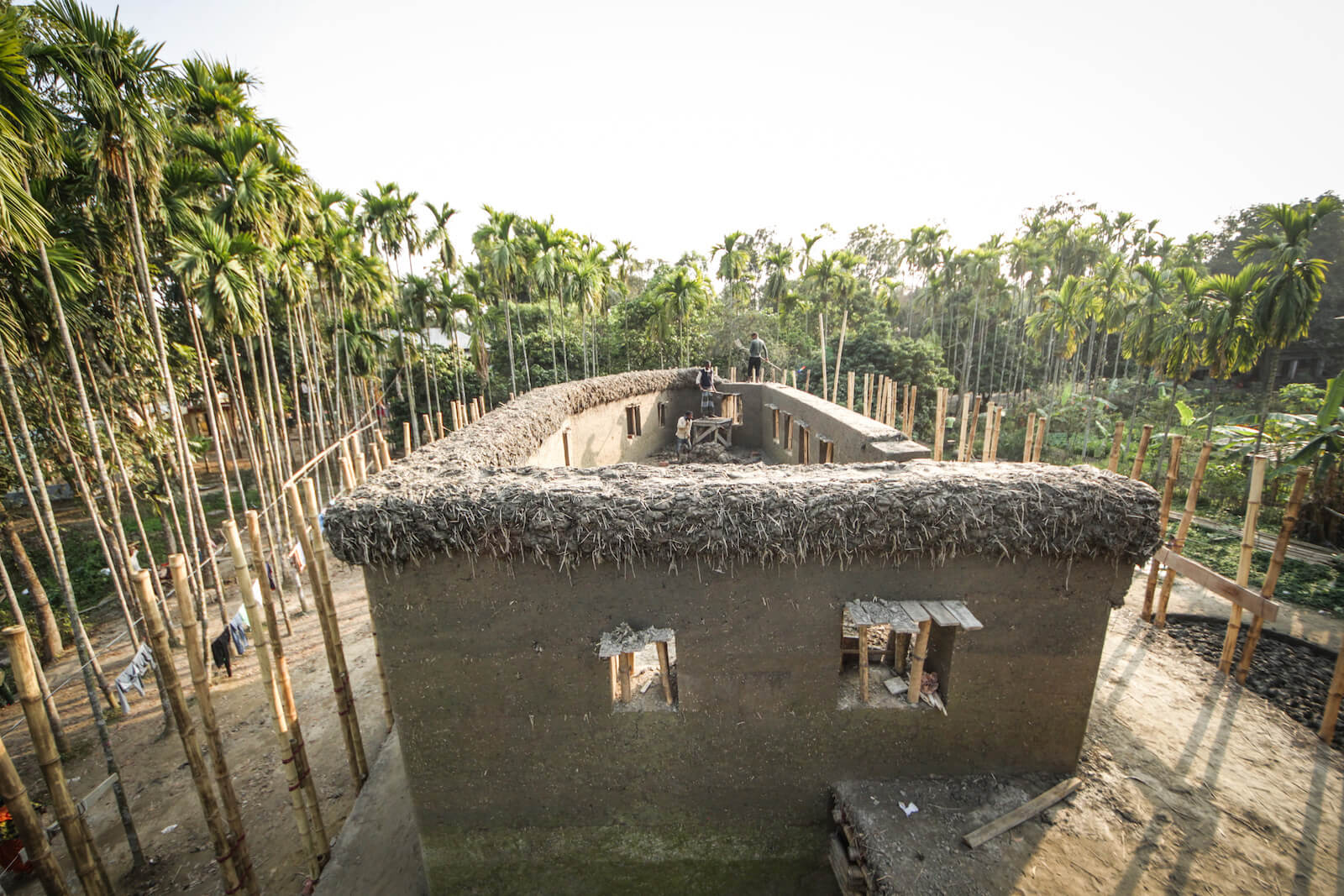 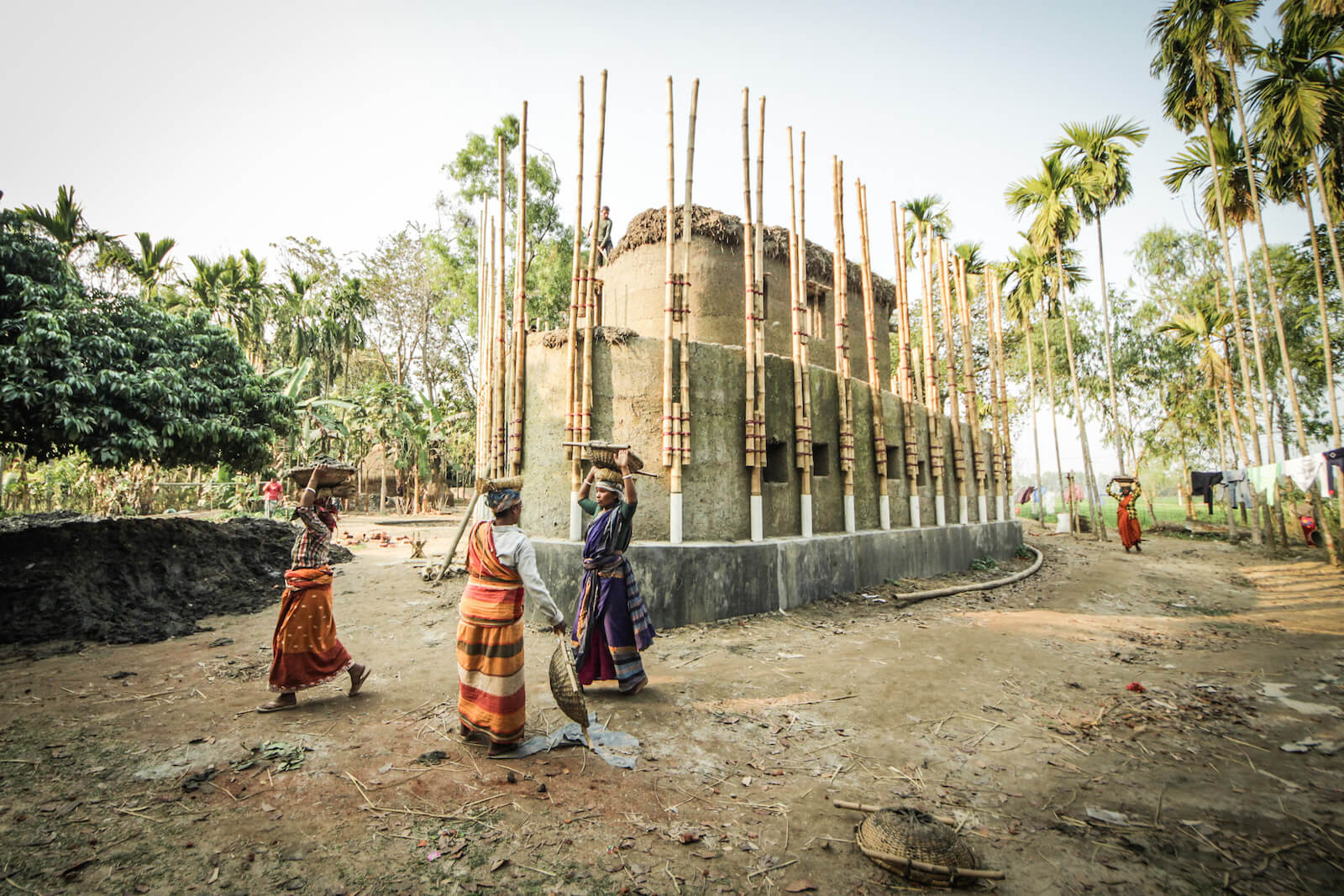 All of this coalesces into a beautiful building with a powerful social dimension. Martha Schwartz was a juror for the Obel Award, a 100,000 Euro prize (which also comes with a unique artwork by artist Tomás Saraceno) presented annually by the Henrik Frode Obel Foundation. She says, “Anandaloy is an outstanding project. It is an original piece. It is not in the style of; it is not imitating something else. [Heringer] is absolutely dedicated to what she is doing, which is what you see when you see a good piece of art: that there is a good, focused intent behind it. She manages to integrate all of her values: she is building sustainably, using the materials that are there, having people involved, so that they can learn to build for themselves, and creating more opportunities for women and for people with disabilities. You can feel that she has a real respect for the culture, for the people, for the land.”