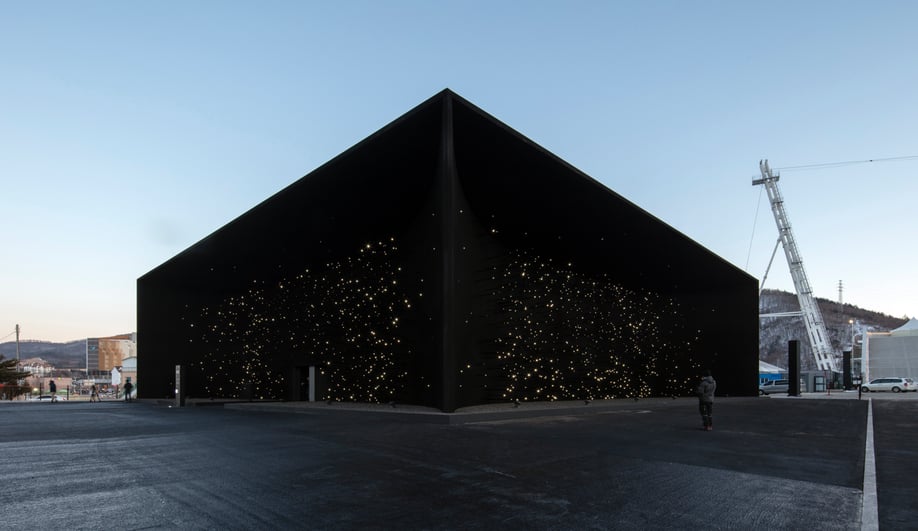 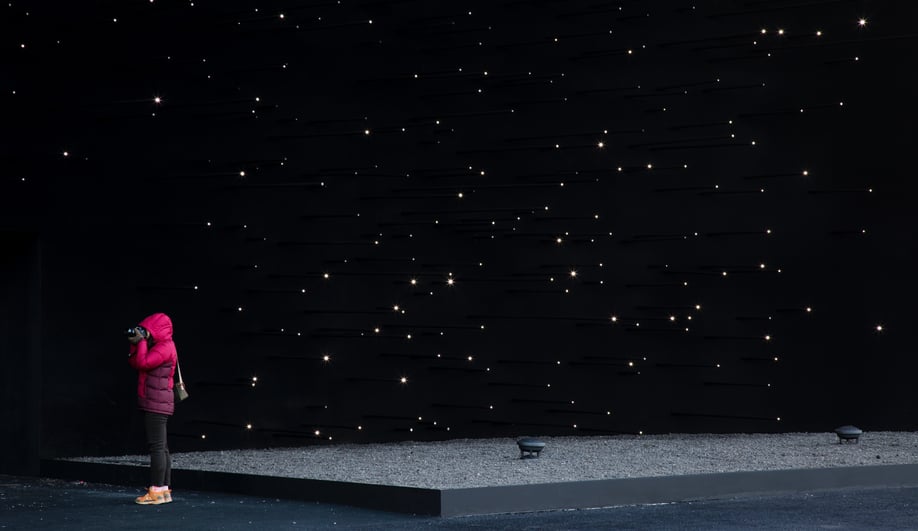 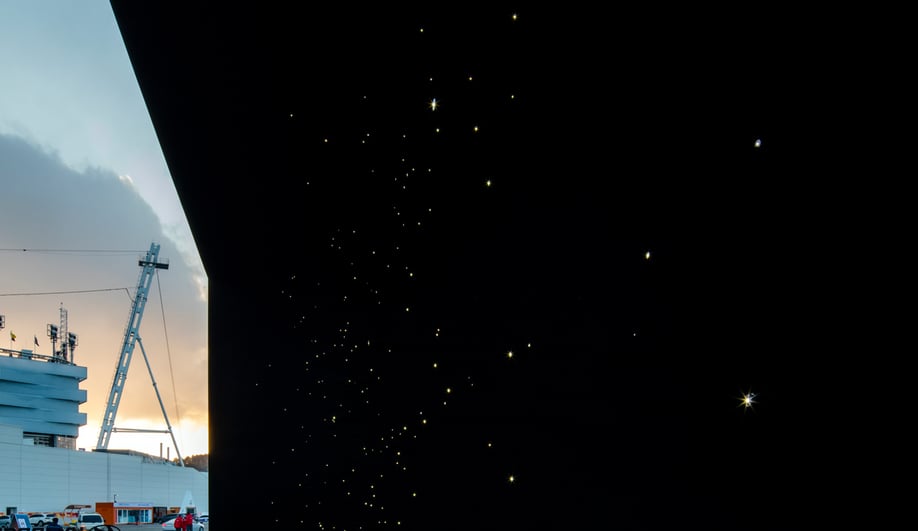 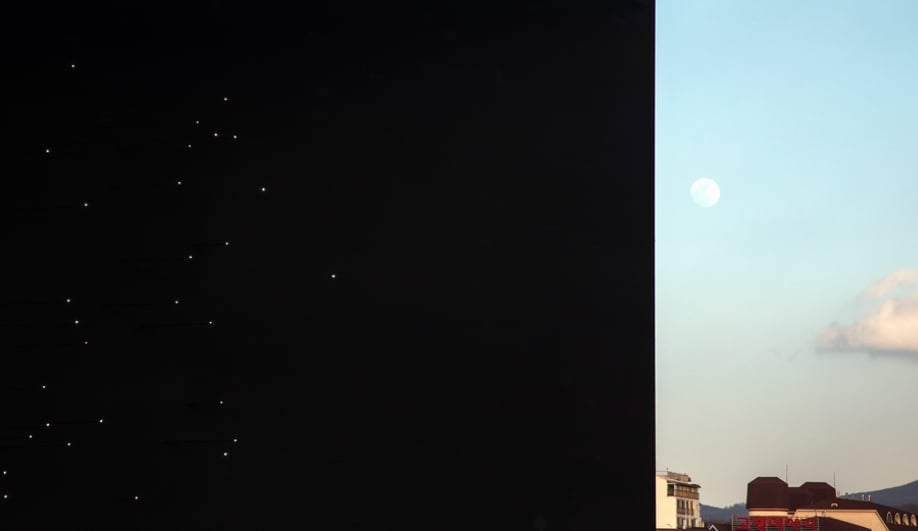 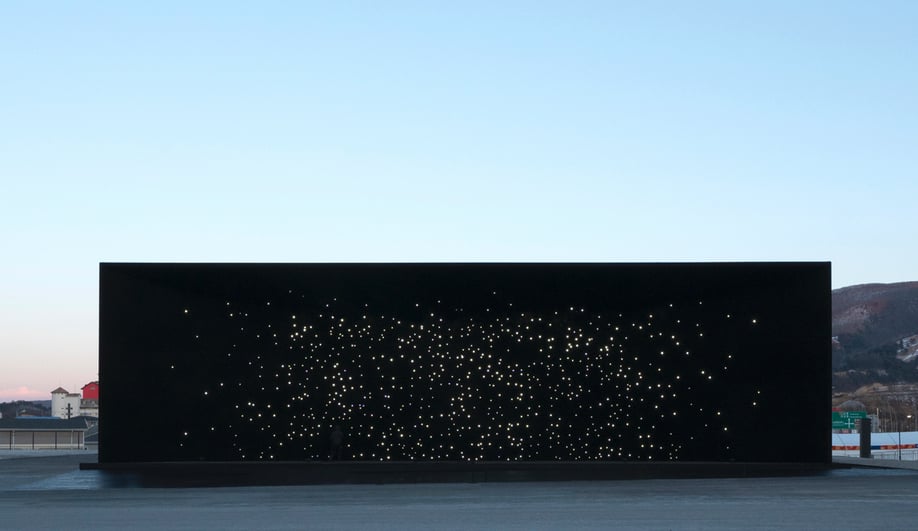 With the 2018 Pyeongchang Winter Olympics around the corner, we are expecting to see a number of impressive pavilions unveiled. Most pavilions will celebrate nationhood and sportsmanship. British architect Asif Khan’s Olympic structure pays tribute to something else: the abyss.

Commissioned by Hyundai, the 35-by-35 metre pavilion was painted with matte Vantablack VBx2, a material that claims to absorb 99 per cent of light that hits its surface. From a distance, viewers aren’t able to distinguish the curves, contours and depth of objects painted in Vantablack, which seemingly renders three-dimensional objects flat.

Vantablack has been described as the “darkest material known to man.” It has the visual impact of a black hole – even in direct sunlight. Vantablack VBx2 is a sprayable version of the pigment, which British artist Anish Kapoor famously acquired creative exclusive rights to in 2016.

On the building’s 10-metre high facade, Khan used the spray-on version originally created for space engineering by nano-material developers Surrey NanoSystems. The exterior is also studded with tiny white lights clustered to simulate a view of the cosmos. When approaching the pavilion, Khan says, the lights seem to move in parallax against its two-dimensional surface.

“From a distance the structure has the appearance of a window looking into the depths of outer space. As you approach it, this impression grows to fill your entire field of view.”

Inside, Khan developed an installation that’s blindingly white – a better fit, perhaps, for the snowy games of the Winter Olympics. The architect created a “multi-sensory hydrophobic water installation” that mists 25,000 individual water droplets every minute.

The droplets eventually pool into a lake (below) before draining away.

As the droplets fall from the ceiling, they almost resemble stars. By the time they collect and form into streams, they are meant to remind viewers of a city viewed from space – or perhaps an aerial view of a freeway. “A water droplet is a size every visitor is familiar with,” says Khan. “In the project I wanted to move from the scale of the cosmos to the scale of water droplets in a few steps.”

The water-based installation was inspired by Hyundai’s fuel cell vehicles, which the brand envisions as its path to the future. The Tucson fuel cell vehicle combines hydrogen and oxygen in a fuel cell stack to produce water-vapour emissions. It is currently available for lease in Canada.

The pavilion will be open to the public on February 9 during the Pyeongchang Olympics’ opening ceremony.

SHARE
Twitter, Facebook, LinkedIn, Pinterest, Email
TAGS
Architecture, Art,
AZURE is an independent magazine working to bring you the best in design, architecture and interiors. We rely on advertising revenue to support the creative content on our site. Please consider whitelisting our site in your settings, or pausing your adblocker while stopping by.