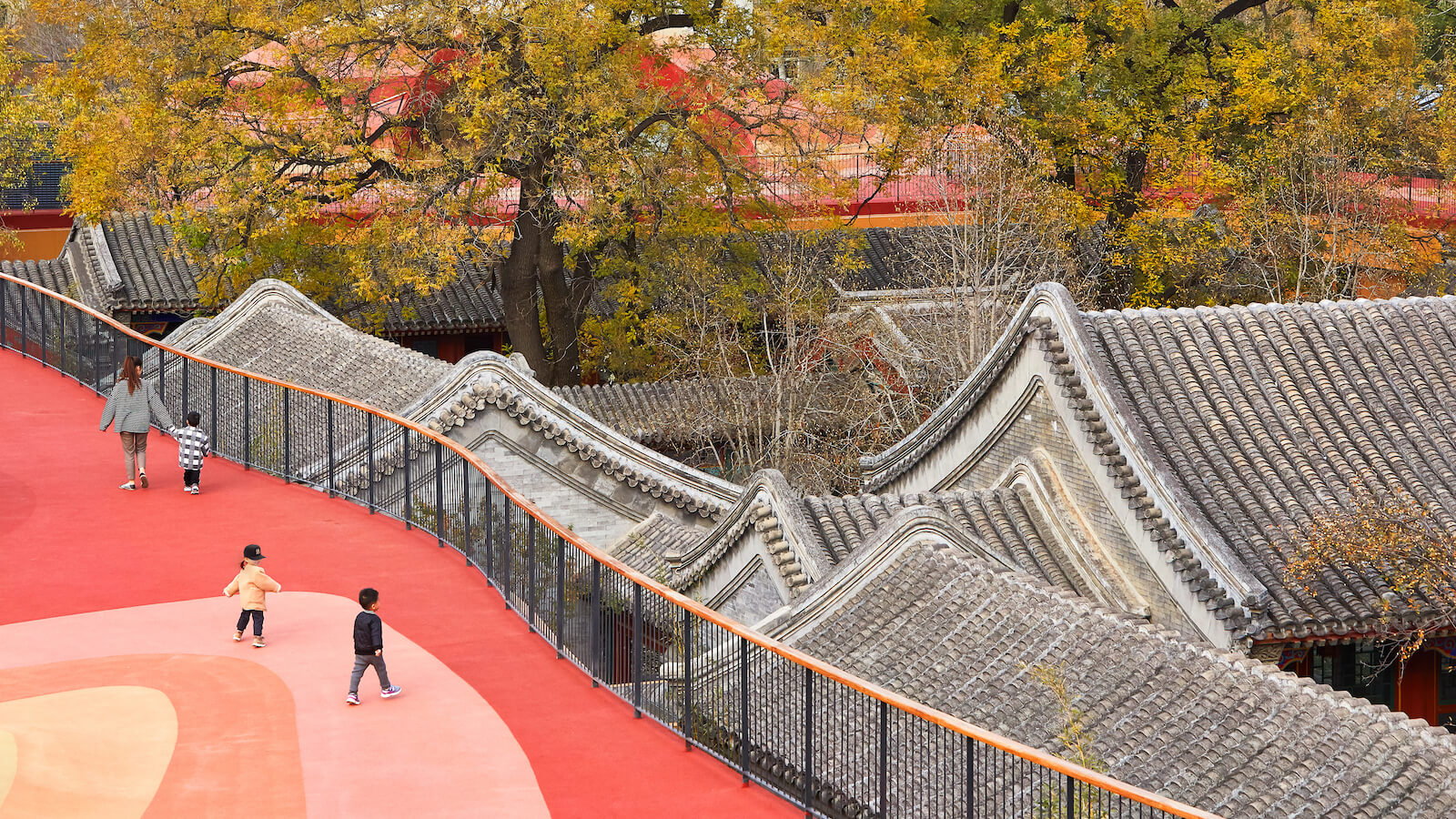 Best of 2020: Top 10 Architecture Projects of the Year

From schools and hospitals to homes and cultural hubs, these architecture projects are at the cutting edge of design.

In January, our pre-pandemic selection of 10 striking projects to shape architecture in 2020 looked ahead to a very different future. But while the COVID-19 pandemic delayed the opening of many of the most hotly anticipated museums and cultural venues on our list, a year of quarantines and lockdowns only amplified the influence of the built environment and the latent vitality of public life. From hospitals and schools to affordable homes and civic hubs, these are the architecture projects that drew our eye – and lifted our spirits – in 2020:

What a year it’s been for Peter Barber Architects. Celebrated for bringing intimacy, grace, dignity – and undeniable style – to affordable London housing, Barber’s trademark palette of buff brick, arches, playfully varied massing and subtly extruded fenestration has spread across the capital, from Greenwich’s terrace estates to Peckham Road’s mid-rise “tenement mansion.” They’re all hits. But the best of the bunch might be the row of social housing suites inserted into what the architect described as a site “previously thought to be undevelopable” in south London.

Designed for residents over 60, the Bevan Road homes replace a row of garages with 11 new apartments that emerge onto an elegantly landscaped pedestrian passage. Framed in a brick arch, each suite’s front door emerges directly onto the narrow mews, fostering a tranquil outdoor social space insulated from cars and the bustle of the city. Once the pandemic subsides, an indoor common room will also welcome residents. From a leftover scrap of London, Peter Barber has created an elegant, inclusive and uncommonly intimate new urban milieu.

The artful stitching together of old and new buildings may be old hat. But even by today’s jaded standards, Perth’s spectacularly reimagined WA Museum Boola Bardip, a state institution devoted to the history and culture of Western Australia, stands out from the crowd. The design by Hassell and OMA — who sought to project “a series of virtual stories” through the reconceived facility (boola bardip means “many stories” in Nyungar, an Aboriginal language still spoken by the region’s Noongar people) — preserves five heritage buildings under a dynamic massing of contemporary volumes sheathed in glass and perforated metal. At the centre of the site, their intersection forms a new sheltered plaza that the architects call the City Room. Inside, two intersecting loops steer visitors through the galleries along vertical and horizontal pathways. At 19,000 square metres, the new WA Museum Boola Bardip is triple the size it once was. More than just reviving the institution, however, it also invigorates Perth. In addition to filtering daylight, that perforated metal cladding effuses a glow at night, serving as both a summons to locals and a beacon to the world.

As architecturally relevant as it is socially important, the Bayalpata Hospital provides new healthcare facilities as well as staff housing in a remote part of Nepal where the doctor-patient ratio is 150 times more extreme than what’s recommended by the World Health Organization. New York studio Sharon Davis Design created the 4,227-square-metre project, built with help from unskilled labour and constructed with rammed earth – a readily available material that exudes warmth and a sense of familiarity for both healthcare workers and patients. “When we are in these buildings we feel at home, because our homes in our district are made of mud walls,” says Dr. Bikash Gauchan, the hospital’s director.

A compelling display of vernacular, the structures feature setbacks, gabled roofs and tall windows that provide generous views. All of the doors, louvers and built-in furniture were crafted in local SAL wood. Much attention was paid to ensuring the complex’s energy systems were as green and self-sufficient as possible: A 100kW array of PV panels installed across all south-facing roofs generates more energy on site than the campus requires, while breezeways, clerestory ventilation and ceiling fans provide passive relief from the sun and a network of landscaped terraces and bio-swales manage monsoon-driven erosion. 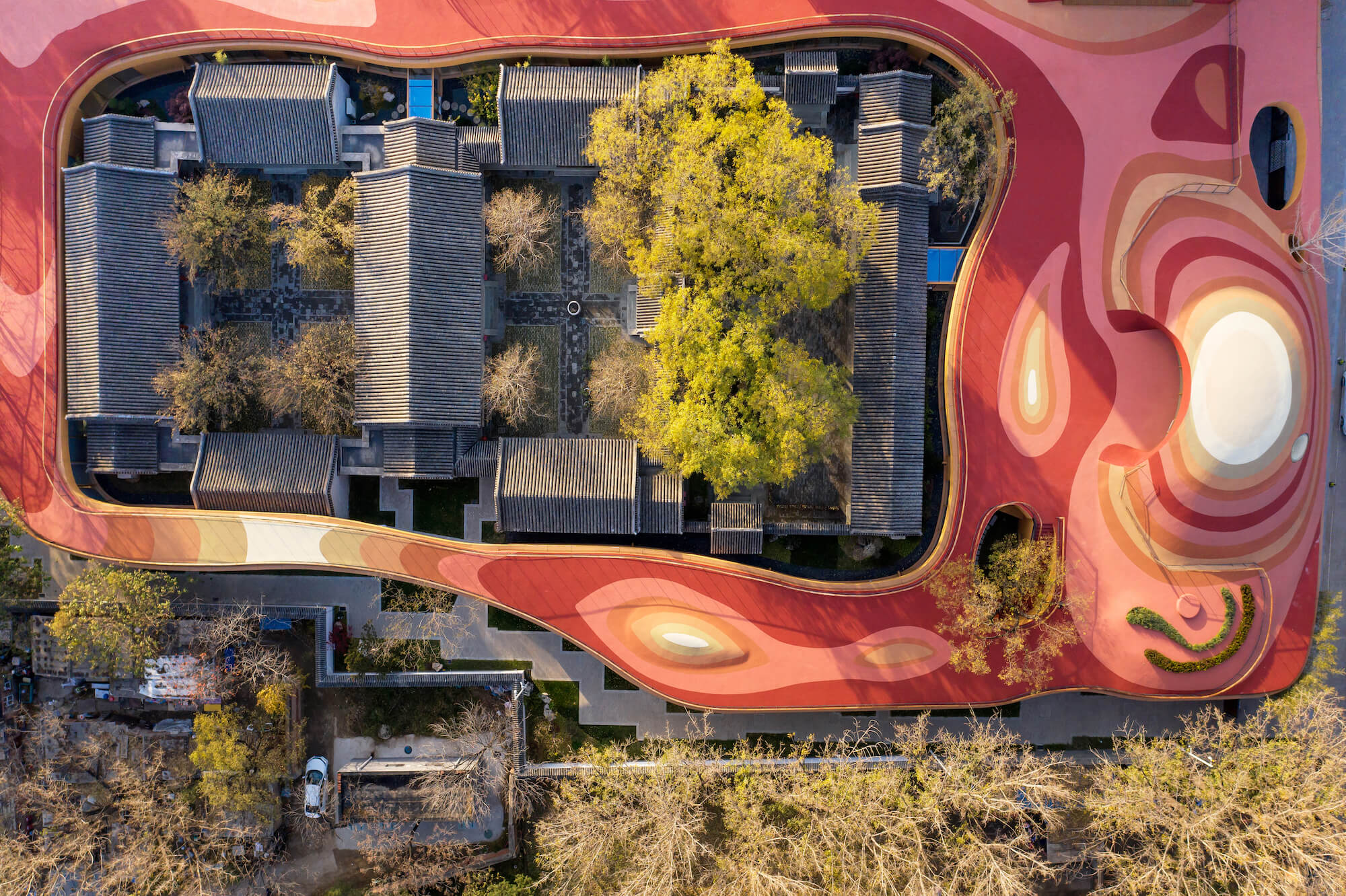 Absolutely stunning. Is there any other way to describe this 10,778-square-metre kindergarten, embedded into an 18th century Siheyuan courtyard in Beijing, whose completion we’ve been eagerly anticipating for a while now? Whimsical, fun, inspiring – these would also be appropriate descriptors. Most of us have seen images of the YueCheng Courtyard Kindergarten’s floating roof, a hilly playscape in red that hugs the site and provides connection between the school and a senior citizens’ apartment adjacent to it. Below this canopy, the classrooms are wrapped in floor-to-ceiling glass walls and lead out to three circular courtyards that wrap around several old trees.

The incredible contrast between the old Siheyuan structures and MAD’s daring new architecture is felt throughout, augmenting an already progressive kids’ learning experience. “The ‘borderless’ learning space, ubiquitous reading environment, and curriculum focusing on learning through exploratory play, not only enriches the interaction between children, but also allows teaching and learning to take place in an optimal atmosphere,” the firm explains.

Highly anticipated since initial visuals of the project were released in early 2015, the Nancy and Rich Kinder Building at the Museum of Fine Arts Houston campus by Steven Holl Architects was completed this fall and officially opened its doors in late November. The three-storey, 2,200-square-metre structure is wrapped in an opaque veil of custom tubular glass that shrouds its scalloped concrete bones. These bulbous masses — described by the studio as “concave curves, imagined from cloud circles”— are bisected by a number of gardens that form the entrance to the institution’s main floor exhibition spaces. Torqued, overlapping features continue within, modulating the natural light flooding the second and third-floor galleries through an expressive and gestural canopy that enlivens the interior with a playful rhythm. While these moves are striking, they’re contextual as much as aesthetic, buffering the museum from the harsh Texas sun. Its a testament to the power and potential of the core tenets of Holl’s practice — form, space and light — when thoughtfully combined.

The question of what to do with floundering shopping malls in the age of online retail (not to mention the current pandemic) continues to confound municipalities from North America to New Zealand. In the Taiwanese city of Tainan, MVRDV has provided one of the year’s most eloquent responses to the problem in the form of Tainan Spring Lagoon, a new sunken plaza nestled into the footprint of a demolished mall originally built on the site only 37 years ago. As its name suggests, an open-air pool dominates the square, which covers 54,600 square metres and sits at the level of the shopping centre’s onetime underground parking garage.

In hot weather, temperature-reducing mist sprayers offer relief to visitors, as does the shadowy arcade encircling the space. The water levels of the pool itself rise and fall according to the dry and rainy seasons. Perhaps the most show-stopping feature of the plaza, which also contains concrete follies left behind by the artful deconstruction of the mall, is a glass floor that exposes part of a second basement level. It all comes together, as MVRDV puts it, “like a contemporary Roman Forum,” offering a visual marker of the past as well as a way forward.

While its irregular crystalline form makes a striking impression, the true beauty of Snøhetta’s PowerHouse Telemark in the town of Porsgrunn, Norway, is how it performs. The fourth in the firm’s portfolio of energy-positive buildings, the mixed-use 11-storey structure was designed to produce more energy than it consumes over its lifetime. Its defining feature is the sloped roof – angled just so to increase surface area and maximize sun exposure – clad in photovoltaic panels that supply power to not only the 8,400-square-metre smart office building itself, but enough for 20 typical Nordic homes (excess is sold and transferred to the main public power grid). To ensure low-carbon emissions, a series of geothermal underground wells contribute to overall heating while dense concrete walls and triple-insolated windows help retain the geothermal and solar energy.

When the venerable New York conservatory The Juilliard School — a name synonymous with excellence in the performing arts — was interested in expanding its presence in China, it looked no further than an equally renowned hometown practice: DS+R. No stranger to landmark cultural buildings (take, for instance, the expertly renovated Lincoln Centre that also includes the organization’s own updated digs), the firm conceived a sprawling complex fit for the “the first performing arts institution in China to offer a U.S.-accredited Master of Music degree.” (The school also provides youth and adult programming and also hosts public events).

Within the over 30,000-square-metre campus, a concert hall, black box theatre, recital hall and more are contained within four pavilions that appear to have been carved by the waters of the nearby Hai River. A series of bridges that house classrooms, studios and practice spaces knit together the autonomous volumes while creating ample indoor gathering areas below. Not to be outdone, the theatres are just as impressive. In a deliberate nod to the warmth of the stateside venue, DS+R clad the interiors almost entirely in faceted wood.

Sprouting from a sloped corner lot on the campus of St. James’s University Hospital in Leeds, the newest Maggie’s Centre is an outstanding expression of humane architecture. Designed by Heatherwick Studio – the London firm’s first completed healthcare facility and the charitable organization’s 26th in the U.K. – the staggered three-volume structure reads as a grouping of large-scale planters with a strong connection to nature: Landscaping by Balson Agius includes dense gardens encircling the entire structure and capping each rooftop. Planted with native evergreens, deciduous trees and other species, the foliage is directly integrated with the building’s program to provide a sense calm and an opportunity for guests to spend time interacting with and tending to the gardens. 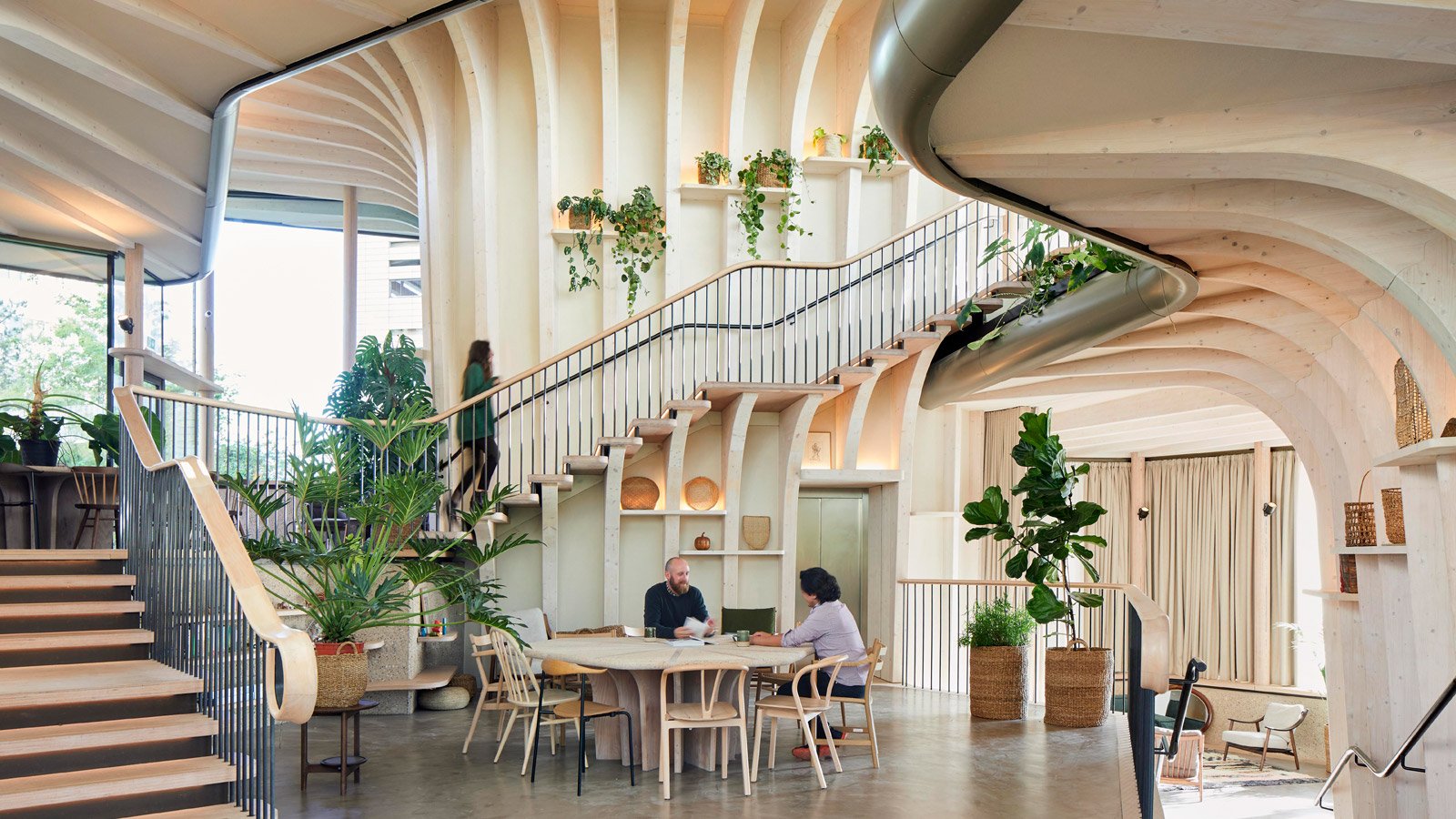 The internal spaces are the epitome of tranquility enhanced by a well-appointed palette of natural and sustainable materials. From the blonde spruce wood base, walls of prefabricated frames (made from sustainably sourced spruce) soar to the ceiling, with rib-like protrusions adding an elegant and organic form. Integrated shelving is appointed with even more greenery and space for patients to display personal mementoes and keepsakes; porous lime-plaster walls aide in maintaining a comfortable internal humidity level throughout the naturally ventilated building. Light-filled and soothing, the Maggie’s Leeds Centre is a compassionate and thoughtful approach to patient care.

On the eastern bank of Wisconsin’s Rock River, the shell of the decommissioned generating remains as imposing as ever. But new life stirs within – with a striking polycarbonate volume hinting at the profound transformation inside. Architects Studio Gang have transformed and reimagined the former industrial powerhouse into a multi-purpose student hub for local liberal arts school Beloit College.

The preserved bones of the coal-fired complex are now home to a recreation centre complete with an eight-lane pool, an elegant field house, and a showpiece running track that winds through the 11,000-square-metre facility suspended from the ceiling. Alongside a 164-seat auditorium, spaces for social life, collaborative work and study round out the facility, which is heated and cooled by radiant panels drawing from the river. And at night, the field house’s seemingly weightless polycarbonate shell lights up like a lantern.

From schools and hospitals to homes and cultural hubs, these architecture projects are at the cutting edge of design.