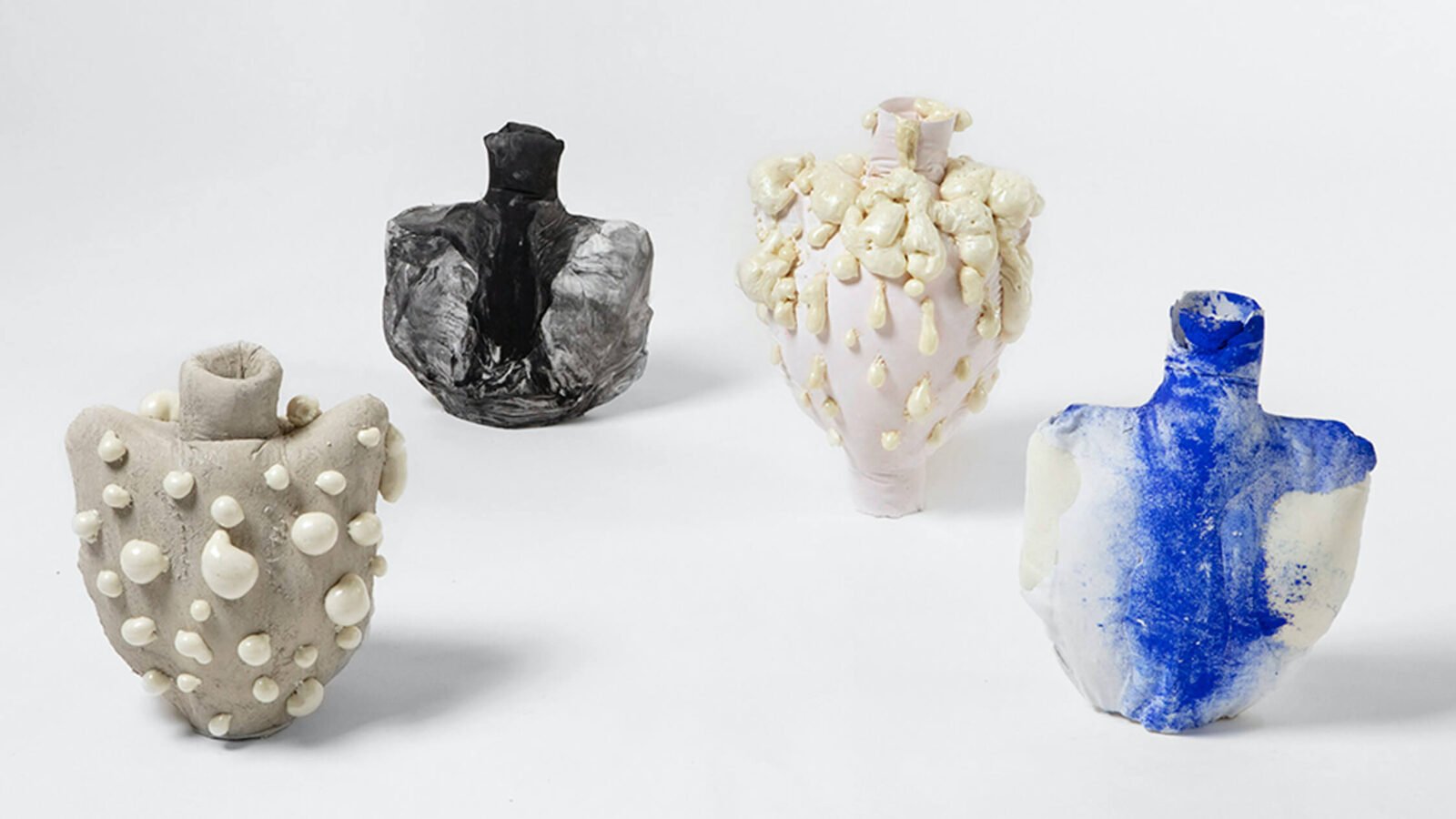 In our era of sick buildings and hidden toxins, the Swedish designer’s grotesquely beautiful works nod to the dangers lurking within the built environment.

It’s tempting to imagine buildings as analogues to our own bodies. Just as post and beam warehouses are often praised for their “good bones,” the language of “hearts” and “skins” – even “brains” – pervades the architectural lexicon. Parsing the renewed popularity of brutalism, critic Alexandra Lange offered simply this of concrete: “It has body.” And does it ever. In a new sculpture series, Swedish designer Julia Olanders reverses the analogy, using the ubiquitous building material (and then some) to conjure unsettling reflections of the human form.

Dubbed Betweenness, the collection of 15 vessels uses the idealized proportions of Grecian sculpture as a reference point for a very different aesthetic. In lieu of pristine marble statues, Olanders’ vases-cum-torsos are composed of concrete, plaster, paint and insulation foam, with bulbous masses and frenzied splashes of colour emerging from the misshapen mass. 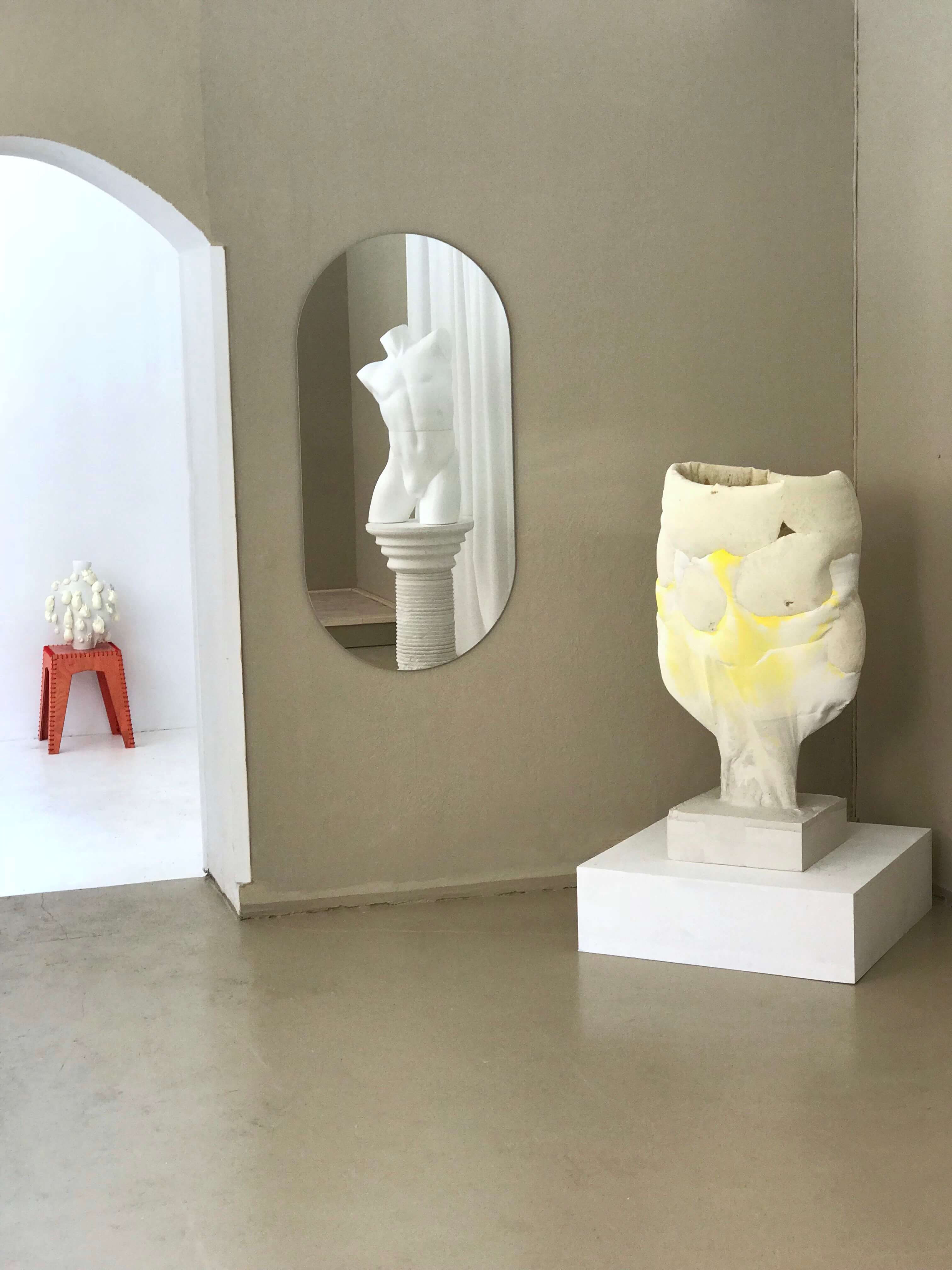 To create each sculpture, a mixture of common building materials was cast into sewn fabric moulds, which were suspended from above to conjure the varied, organic shapes. Then, once the form settled and the fabric was removed, Olanders’ vessels emerged. While the plaster, concrete and insulation foam were poured directly into the mould, colours were either added directly into the moulds as pigments or applied afterward with spray paint.

The results are something. Concrete and plaster combine to create uncanny evocations of human bodies, while jarring bursts of insulation foam add an element of bodily horror, oozing from their shells like some malignant plague of tumours. Olanders describes the vessels as “a body stripped from its revealing skin, a fleshy equivalent of the antique statue.” 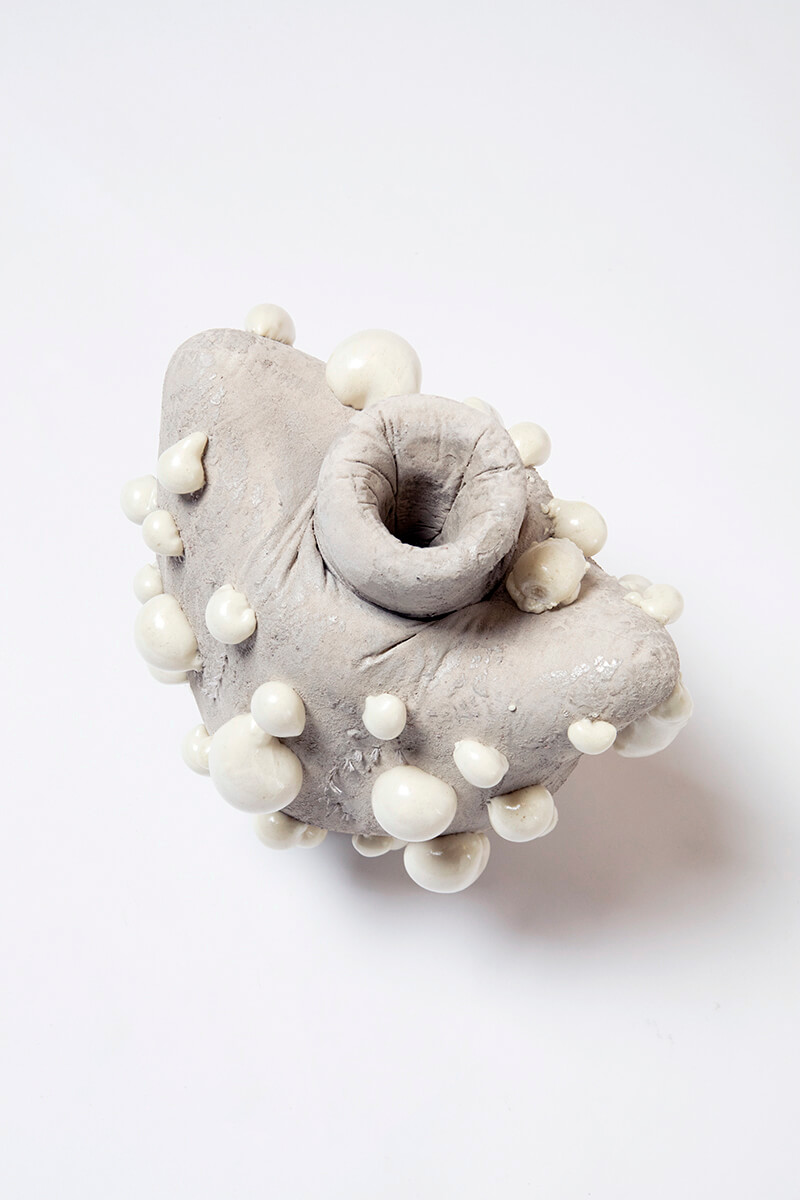 Splashes of paint introduce a similarly unnerving effect, as if to convey some Lovercraftian illness emanating from within. It’s a shock to the system. For Olanders, however, a sense of toxicity and sickness is paired with unflinching fascination.

“I need to wear a protective gas mask and gloves at all times when working with these materials,” said Olanders. “They’re very bad for my skin and for inhalation. And that’s really where my fascination started in this project.” 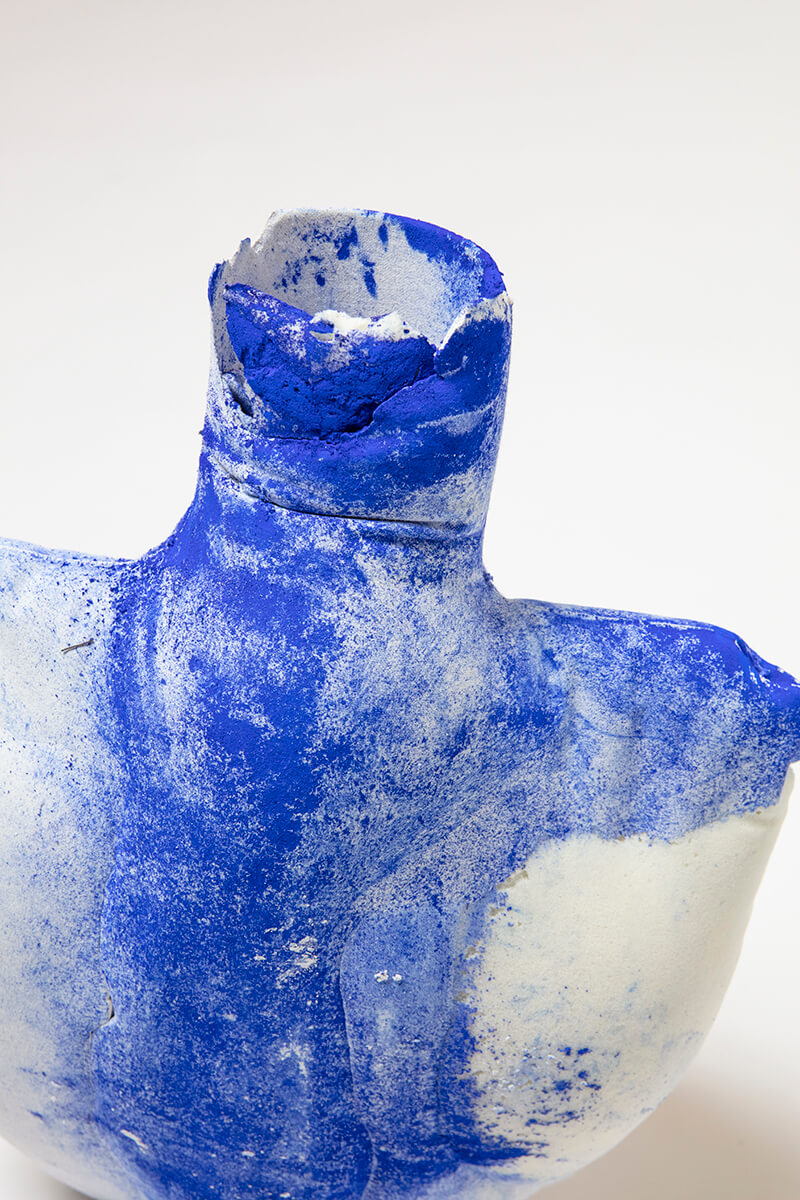 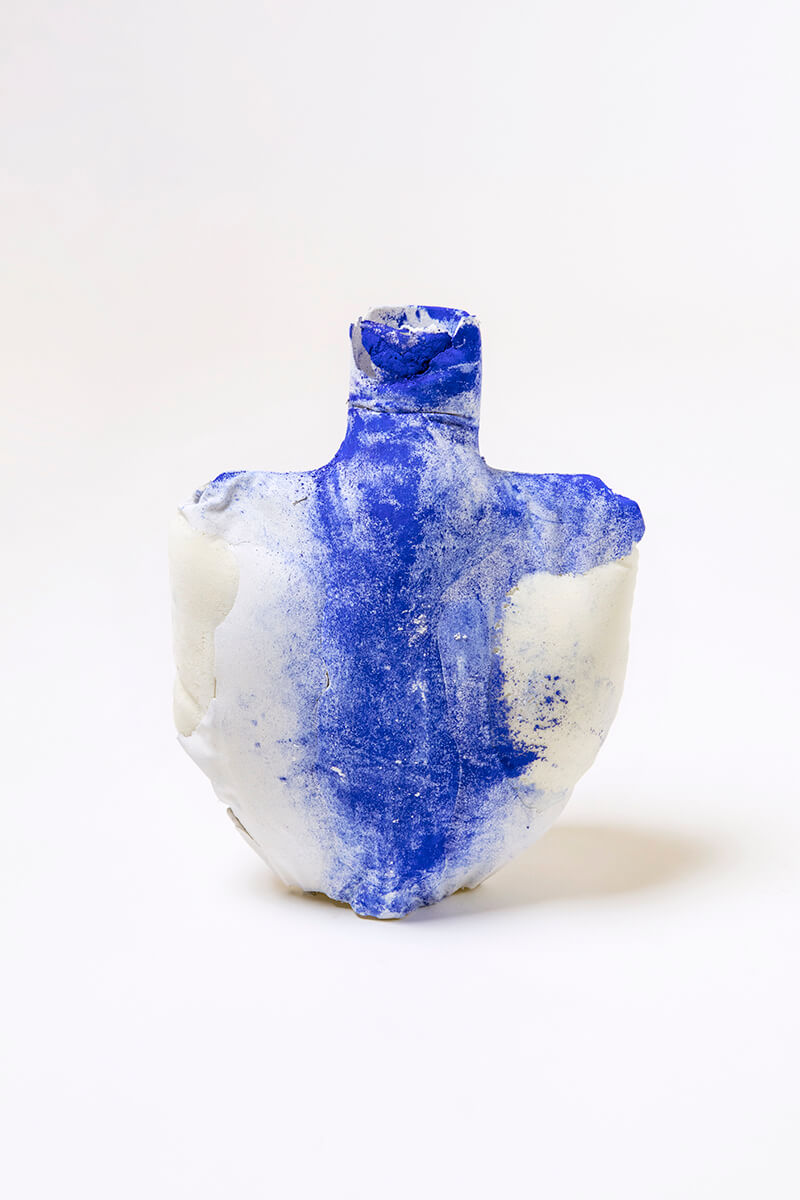 But for all their (implied) horror and (actual) toxicity, the revulsion goes hand in hand with a sort of grotesque beauty. At the very least, it’s hard to look away. The uneasy marriage of construction materials and the human form also invites an unsettling revelation: If we think of buildings as bodies, should we think of them as very sick ones?

In an era where embodied carbon and “sick building syndrome” are at the forefront of architectural consciousness, the sculptures hint at the (mostly) hidden dangers embedded within the built environment. Concrete, insulation and paint – all carbon-intensive and toxic. Belying their otherworldly aesthetic, Julia Olanders’ sculptures speak to real and tangible environmental phenomena. 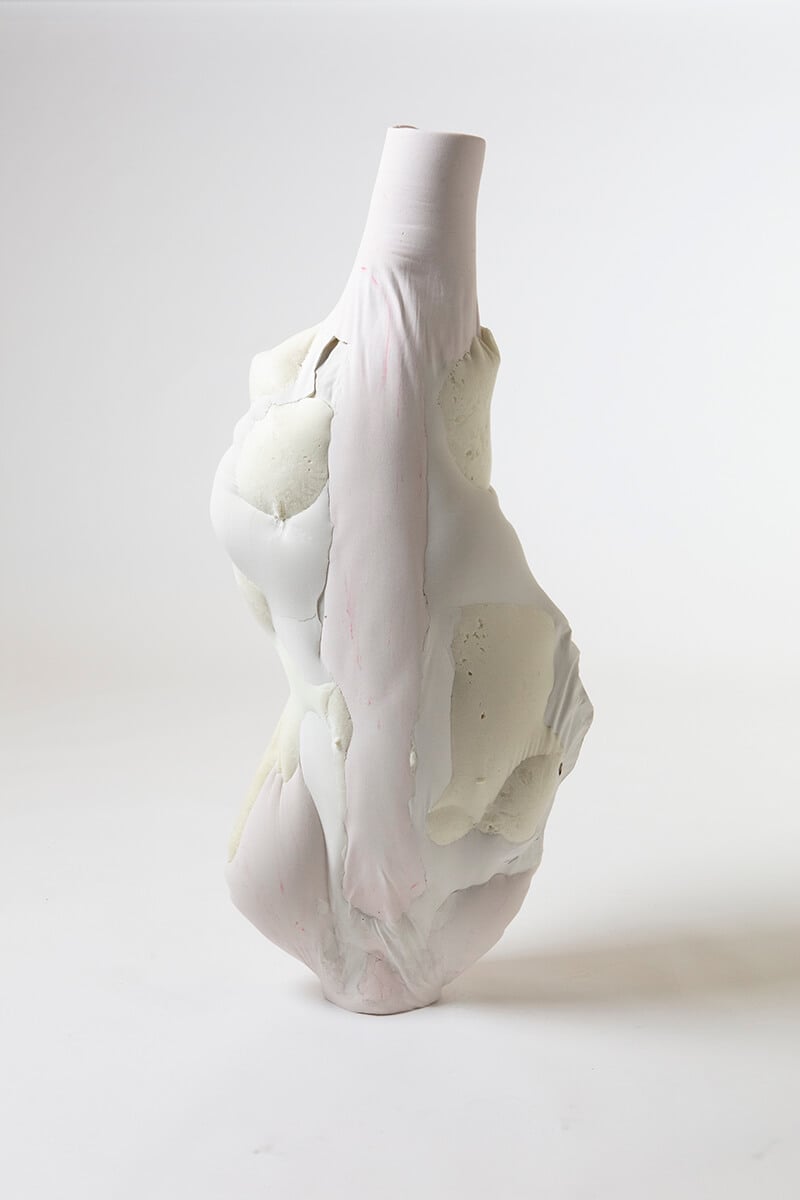 But architectural consciousness is evolving. In fact, one of the Betweenness vessels is even set to be displayed at Stockholm City Hall, bringing a disquieting phenomenon into the public eye. To make the sculpture safe to exhibit, however, Olanders first had to spray down the insulation foam with a protective coating.

In our era of sick buildings and hidden toxins, the Swedish designer’s grotesquely beautiful works nod to the dangers lurking within the built environment.