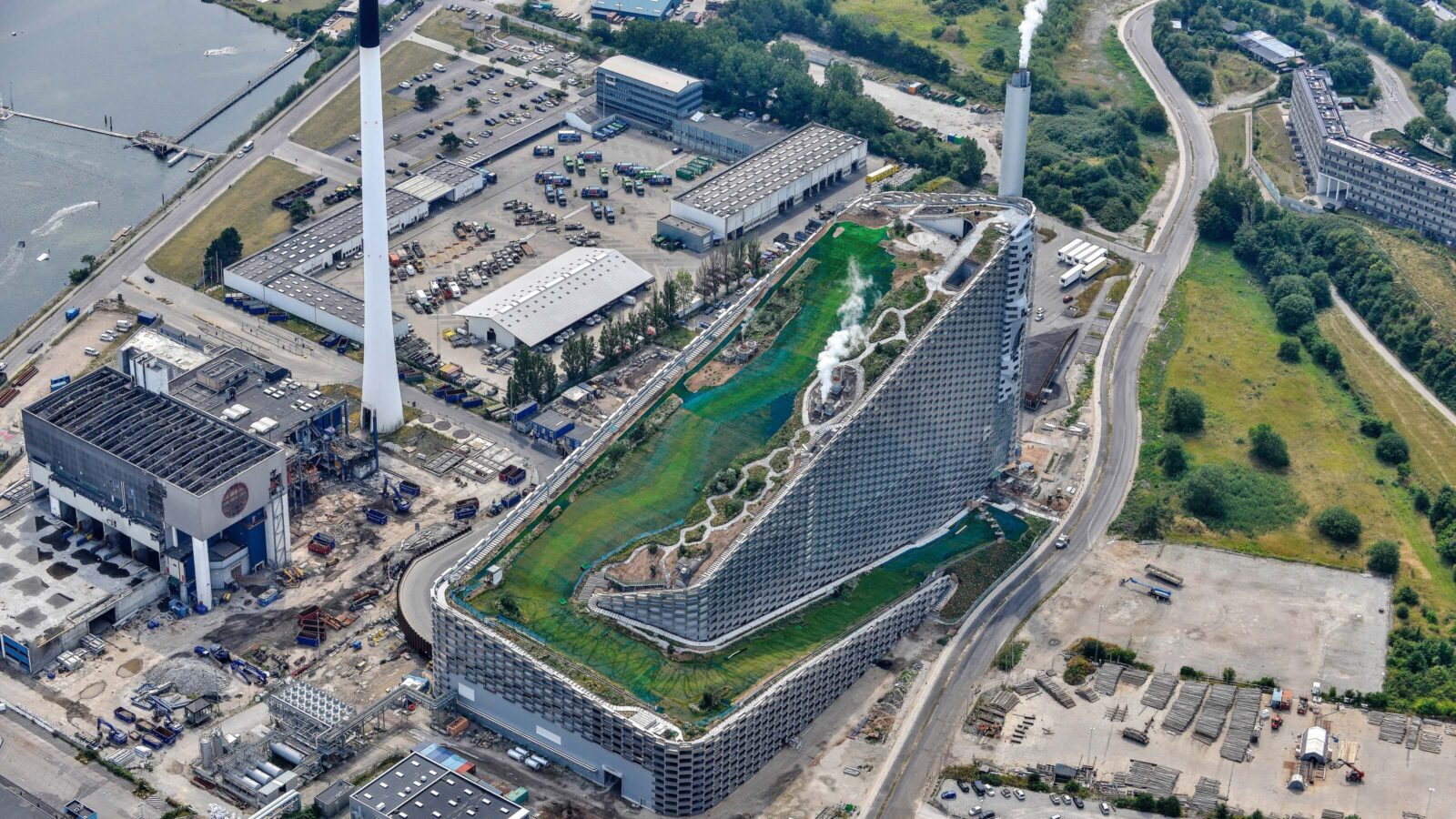 A waste-to-energy incinerator that you can ski down, Copenhill is perhaps the most-hyped of the Danish firm’s projects.

Even for a firm as prolifically innovative as BIG, this has been a busy week. Among other news, Bjarke Ingels Group has just released images of its sculptural bridge in Norway, renderings of the King Toronto condo development‘s penthouses and – finally – photography and drone footage of the just-opened Copenhill / Amager Bakker power station on the industrial waterfront of Amager.

When was the last time a piece of public infrastructure generated this much interest? Perhaps when WXY and Dattner Architects finished the Spring Street Salt Shed in Manhattan – another example of making a utilitarian building a wow! project. But BIG’s ambitious Copenhill, many years in the making and already much-written about, goes further than bringing beauty to such a structure: It actively draws people in through its programmatic design – doubling as a “fun factory,” in the words of the firm. The 41,000-square-metre waste-to-energy plant integrates a ski slope, a hiking trail and a climbing wall. 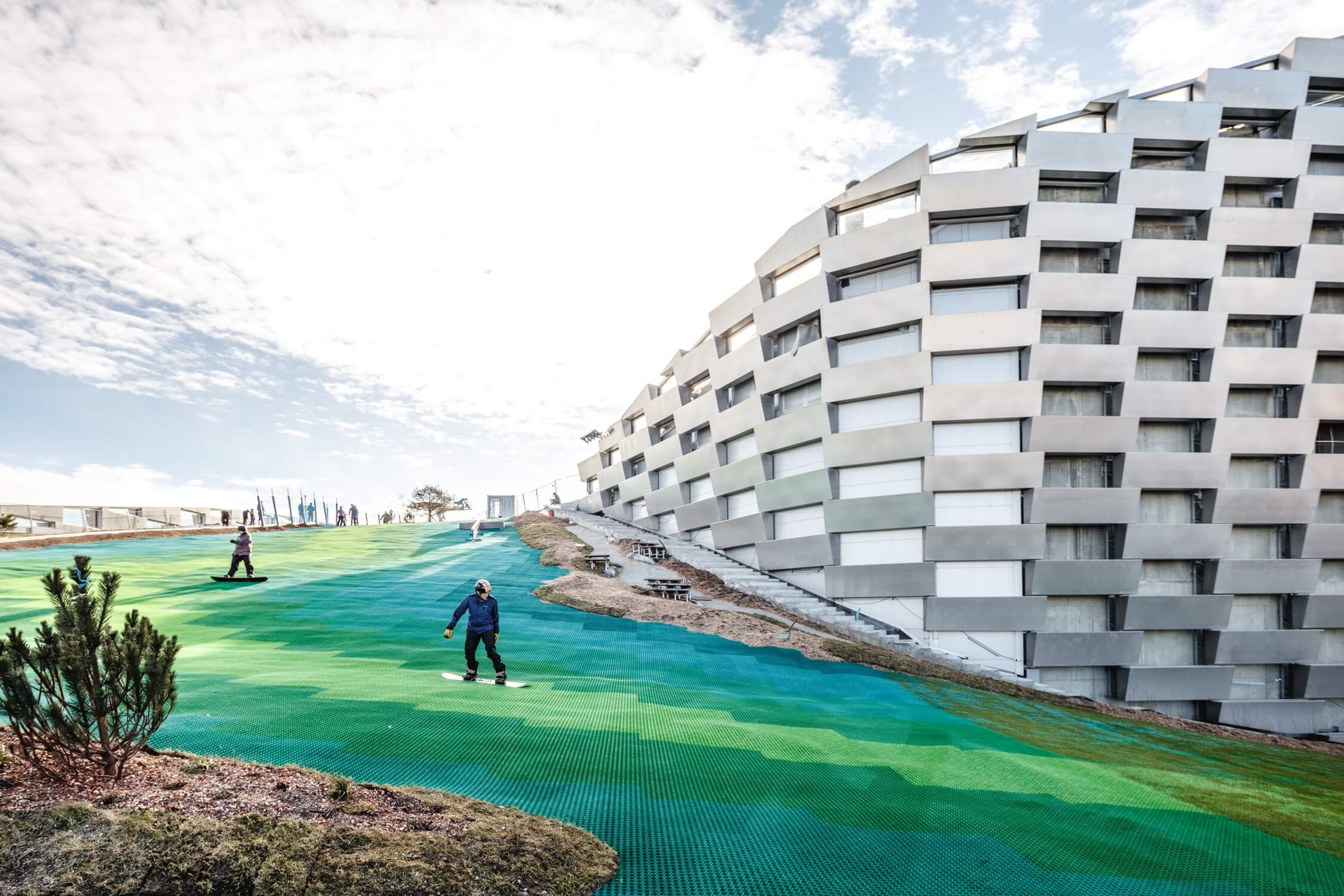 Wrapped in a glass and aluminum facade, the metal bricks measuring 1.2 metres tall and 3.3 metres wide, the twisty building replaces the adjacent existing waste-to-energy plant. The new, higher-tech facility incinerates 440,000 tons of waste annually, converting it into enough clean energy to power and heat 150,000 homes. The equipment required for this feat – from ventilation shafts to air-intakes – required a novel architectural design that would also provide 10 floors of administrative space and a 600-square-metre education centre for tours, workshops and conferences. With a spiralling elevation topped by a 10,000-square-metre green roof, the building also mitigates the micro-climate effect, by “rewilding a biodiverse landscape while absorbing heat, removing air particulates and minimizing stormwater runoff.” It’s also surrounded by a running trail and landscape by Danish landscape architects SLA.

Inside the incinerator. Image by Soren Aagaard

Now, the fun-factory part: The year-round artificial ski slope starts at the top and is accessed via an glass-enclosed elevator where visitors can also peek inside the waste incinerator. It represents the length of an Olympic half-pipe and is meant for expert skiers (who can zip right to the 600-square-metre après-ski bar at the bottom of the ski slope). The building’s lower slopes feature a timed slalom course for kids and beginners. And its longest vertical facade is home to the tallest artificial climbing wall in the world, at 85 metres high.

The Amager waterfront has become a place for wakeboarding and go-kart racing. Copenhill adds skiing to the area’s activities. Image by Aldo Amoretti

For all this exciting activity, one of Copenhill’s most intriguing aspects is its symbolism – manifested by a smoke ring (or the promise of one). As the firm notes, “While sustainable energy has become increasingly important in media and politics, the understanding of the issue itself is still very abstract. Does anybody know what a ton of CO2 looks like? We propose a simple modification to the smokestack that will allow it to puff smoke rings whenever 1 ton of fossil CO2 is released. These will serve a communicative function as a gentle reminder of the impact of consumption.” As of now, the smoke ring has been successfully developed and tested as a prototype, but requires funding to execute as a regularly occurring feature.

An icon on Amager’s industrial waterfront. Image by Aldo Amoretti

Whether the smoke ring materializes or not, the very existence of this power plant – designed to attract families, recreation seekers and spectators – raises the bar the world over for how we can more boldly imagine infrastructure from now on.

A waste-to-energy incinerator that you can ski down, Copenhill is perhaps the most-hyped of the Danish firm’s projects.