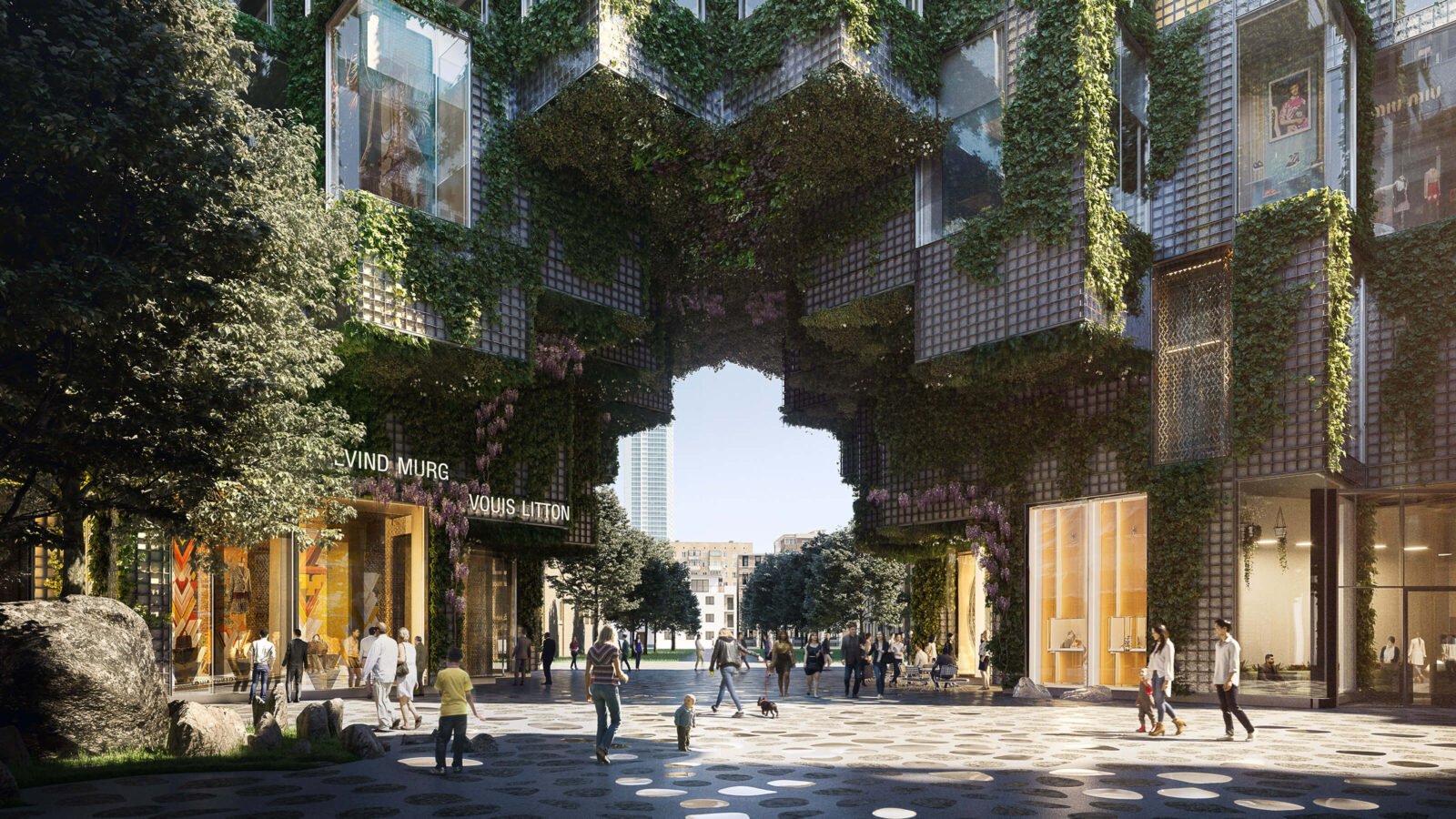 Bjarke Ingels and Westbank have unveiled new images of KING Toronto’s architecture, interiors and details – and introduced the city to a next-generation gesamtkunstwerk.

Last night in Toronto, a capacity crowd gathered at Roy Thomson Hall to hear developer Ian Gillespie of Westbank, Danish architect Bjarke Ingels and Canadian artist Douglas Coupland discuss the intersection of art and architecture in Westbank projects. The three recently collaborated on the Telus Sky tower in Calgary, an inversion of BIG’s Vancouver House project – rectangular-footed at grade and tapering up sinuously – for which Coupland created the digital artwork that animates the facade. Gillespie positioned his full-fledged embrace of art, which has involved collaborations with the Art Gallery of Ontario (on Zhang Huan’s Rising at the Shangri-La Hotel in Toronto) and the Vancouver Art Gallery, as a driving force in his company’s transition from developer to cultural enterprise.

“I spend 20 per cent of my time on our public art practice,” he told the audience. Among other upcoming projects, he’s working with B.C. artist Rodney Graham to install the Spinning Chandelier and with Bjarke Ingels to affix digital paintings Sistine Chapel-style under the roof of the Granville Street Bridge (directly next to Ingels’ Vancouver House). He’s also enlisted Frank Stella to contribute an ensemble of sculptures to Mirvish Village (a Stella painting famously hung in David Mirvish’s Markham Street gallery for many years). 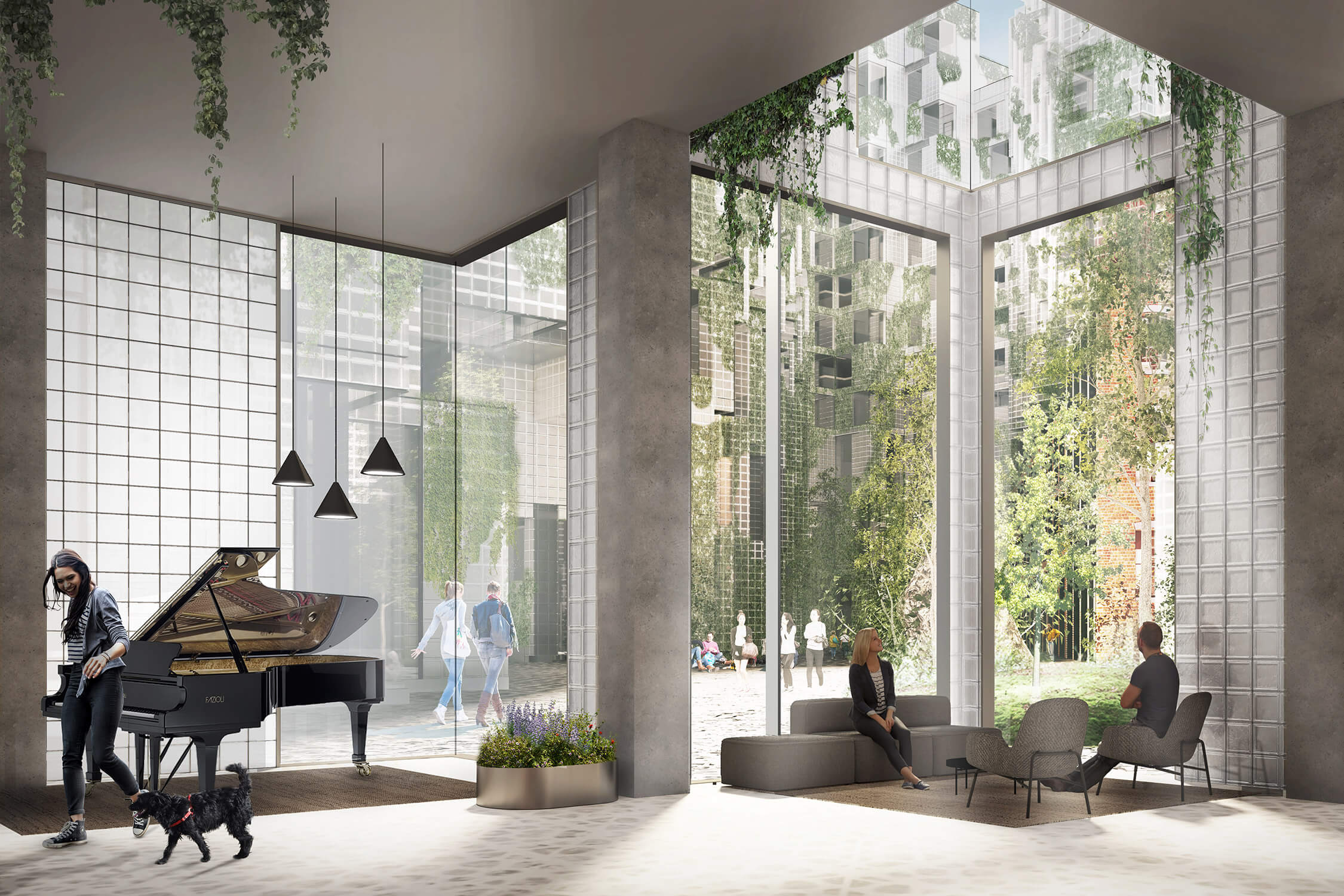 The atrium of KING Toronto, facing a courtyard

What all of these projects point to, for both Gillespie and Ingels, is the enduring idea of the gesamtkunstwerk – the holistic merging of architecture and art, of form, function and detail.

This concept is at the core of Westbank’s KING Toronto project – which is what most of last night’s audience members (many realtors among them) were there to hear about. Seldom has there been so much excitement over a condo project, but this residential development drew rush-ticket crowds to attend a panel discussion at the Roy Thomson Hall, an Arthur Erickson icon that, Gillespie pointed out, “reminds us of what really great architecture represents to a city.” From the new renderings of KING Toronto, it is apparent how dramatically this “boxilated landscape” (Ingels’ coinage) will transform Toronto for the next generation. Yes, the project will alight on one street – King West – but its impact will be felt across the city, perhaps sparking the galvanizing effect on architecture and city-building that, as Ingels lamented, failed to emerge from its inspiration, Moshe Safdie’s Habitat 67 in Montreal. 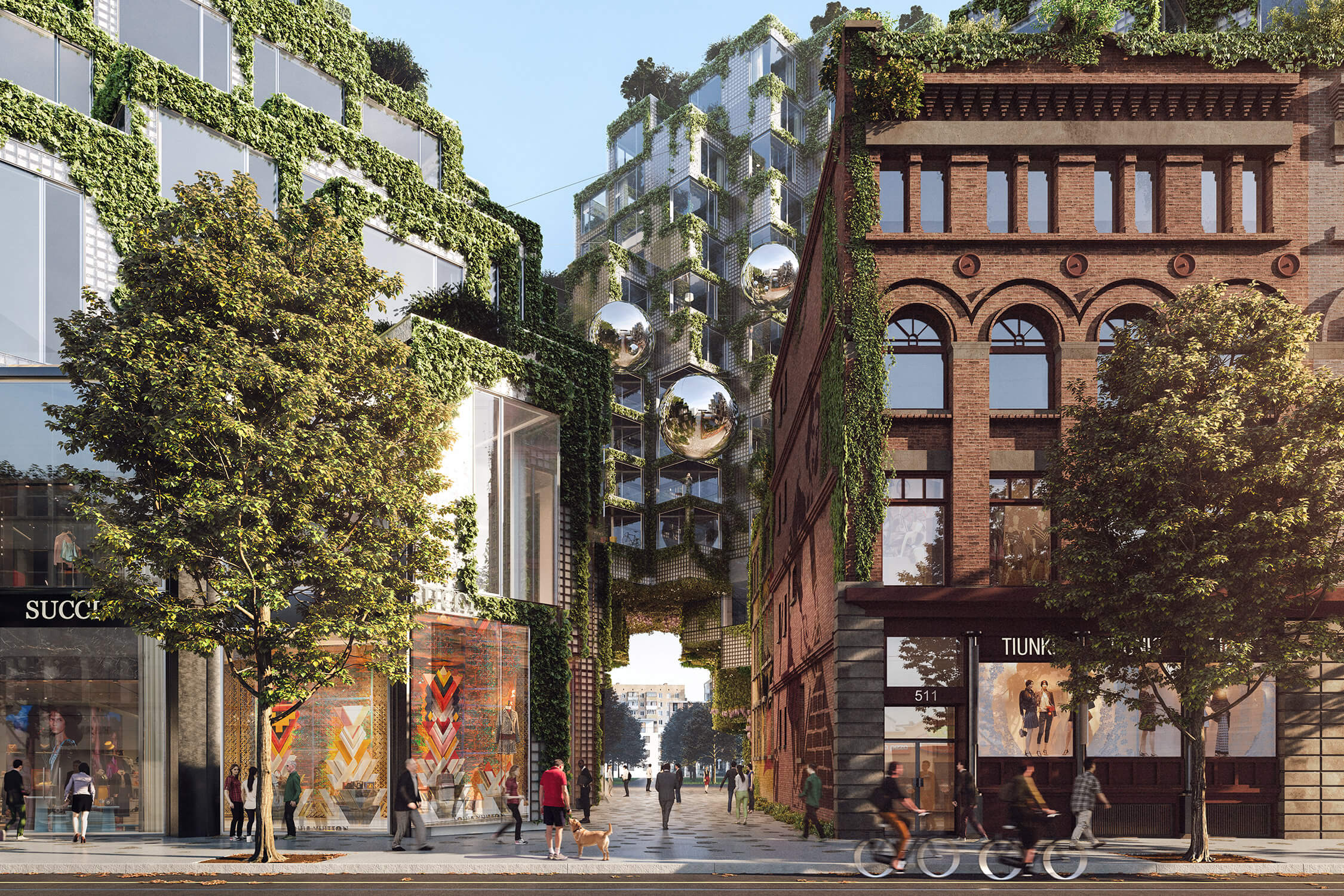 A cavelike gateway from King West to the courtyard 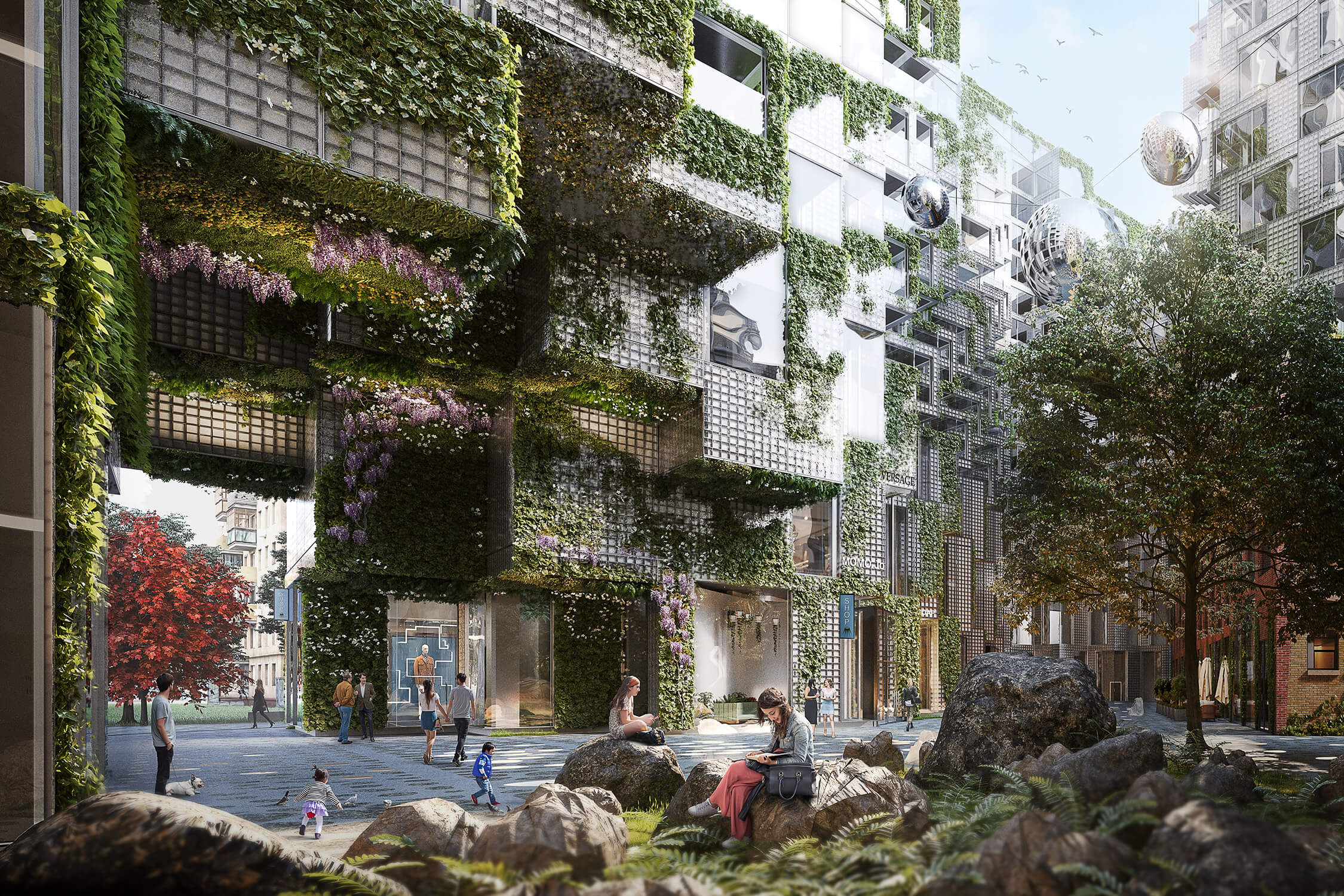 The gesamtkunstwerk notion partly speaks to how the building will change the face of the street. The modular massing will bulge out like a treed mountainscape from around and between the red-brick heritage buildings that give this stretch of King West its character, “like a new organic growth climbing over them,” Ingels explained. In the public courtyard (with landscaping by PUBLIC WORK, the firm behind The Bentway) there will be shops, cafes, restaurants, and of course a public artwork. Viewed from afar, the architecture might seem overwhelming, but (as Ingels showed) the significant building volumes will be balanced by a variety of openings – niches, cavelike gateways (from the street to the courtyard and beyond) – and by the volumes’ material palette.

“We wanted to have a dialogue with local materials. We tried all kinds of brick – red brick, yellow brick, black brick – and finally ended up with glass brick,” Ingels explained. This translucency as well as the vegetation that will grow on exterior walls and terraces make the project porous to its surroundings. And the building’s pixelation fed into the myriad floorpans that make up the interior compositions. “We created room-sized lego pieces – places for living, sleeping, outdoor space – and with those elements you can compose any kind of home,” Ingels explained. 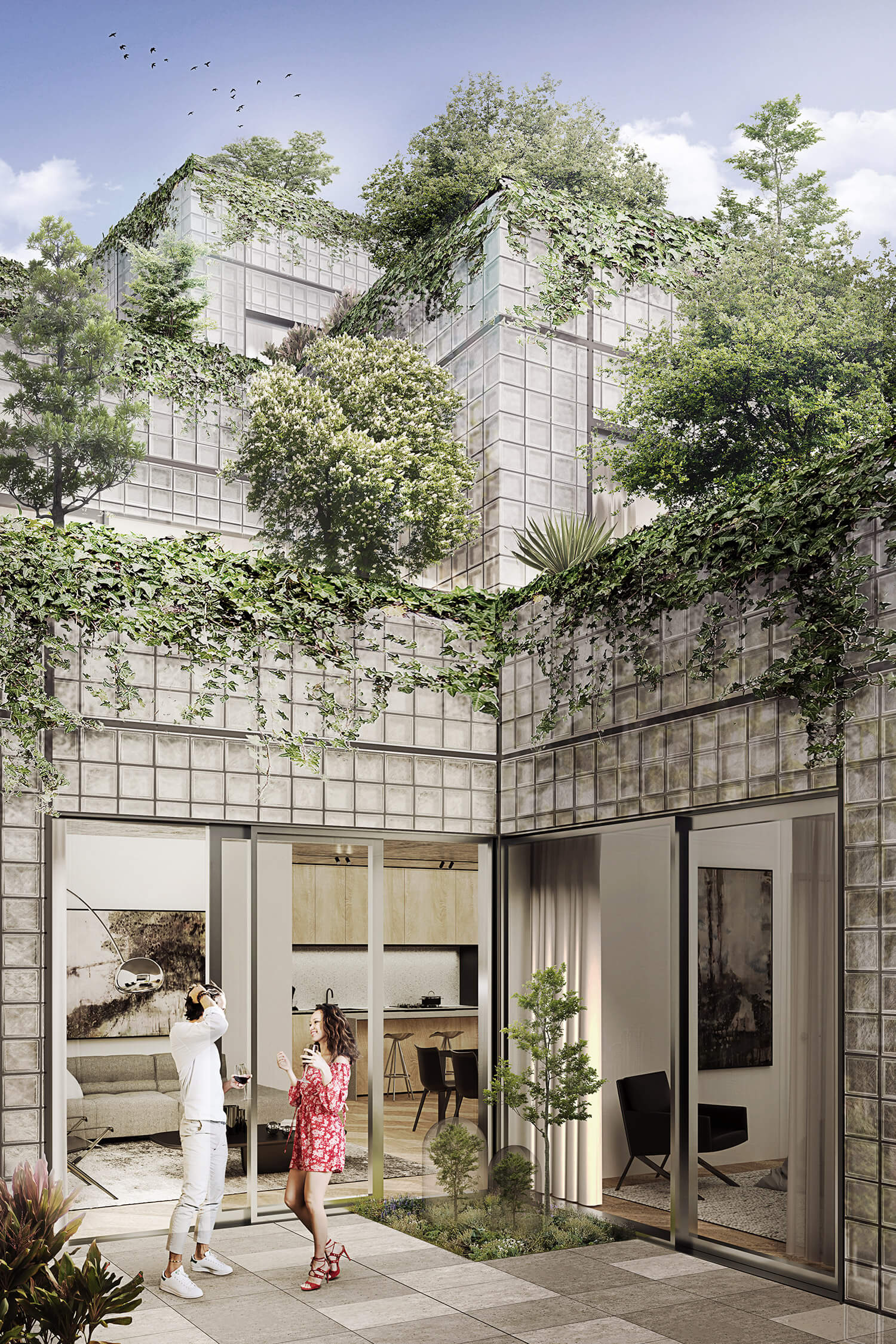 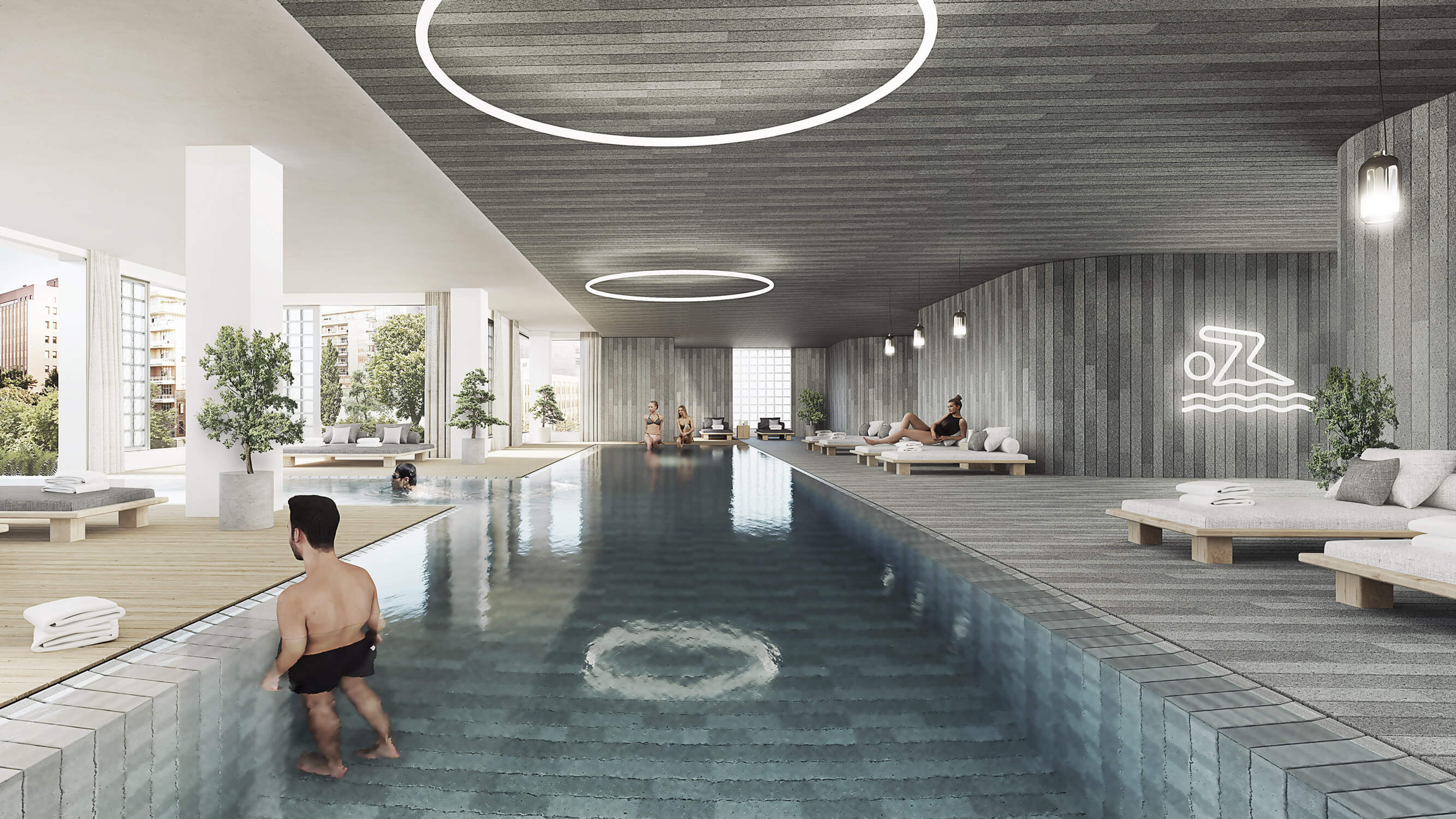 Francesca Portesine, Director of Interiors at BIG, further elaborated on the main design moves with Azure. “It’s very important, this holistic view of the project – the ability to coordinate and ‘masterize’ everything, from the architecture to the details,” she said. Plant life was treated as a material on the interior as well. “At BIG, we have a landscape department, so we are more and more experts on what to do and where, and have made many studies in relation to light exposure and soil retention.”

The firm also created the Gople light fixture with Artemide, a lamp that increases the wellbeing of both people and plants and that will be in every condo dining room. (Another high-end Italian manufacturer, B&B Italia, collaborated with Westbank and BIG to provide the condo’s furnishings.)

The options for the kitchen with rhomboid wood flooring

In the building’s common areas, the emphasis was on connecting indoors and out. “The ground floor is the most permeable – styled to be more urban toward the city, and more green towards the greenest parts of building,” says Portesine. This “living room” leads to the public courtyard and also features an area that is itself open to the public. The amenities – including the gym as well as the pool with its Nordic-inspired granite and basalt surfaces – have generous views to the city. “It was very important to increase the views and the ways in which we can enjoy natural light for personal wellbeing.”

Materiality was a huge consideration in both these common areas and in the condo suites. The main inspiration was the neighbourhood’s industrial feel. In the lobby, corrugated concrete panels clad the elevator, for instance. In the condo kitchens, cabinetry comes in three wood options as well as a corrugated textured glass with a mirrored backing (the best and most daring choice, obviously). “This idea of translucency comes from the facade,” Portesine explains. The wood and terrazzo floor tiles on offer – comprised of rhomboid shapes evoking flattened boxes – refer back to the building itself. From city to building to detail, KING Toronto is a thoughtful project – and one that deserves the excitement it has unleashed for both design and art in this city. 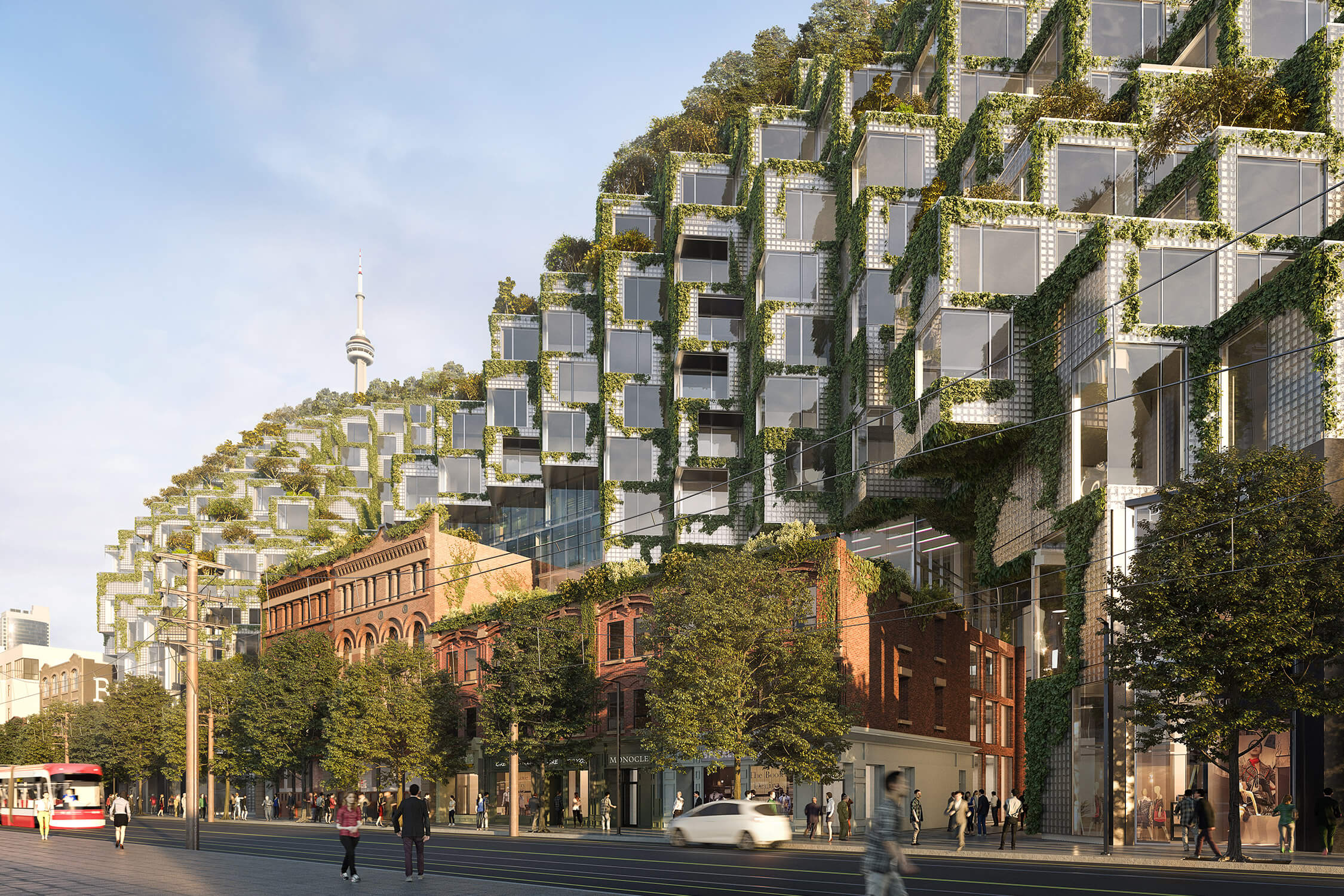 Bjarke Ingels and Westbank have unveiled new images of KING Toronto’s architecture, interiors and details – and introduced the city to a next-generation gesamtkunstwerk.