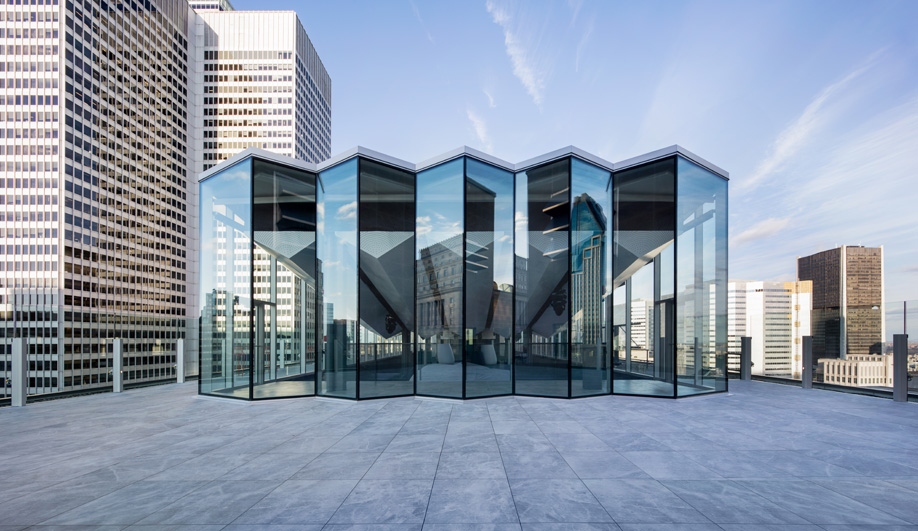 Espace C2 is a dramatic new event space with a floating butterfly roof that lands atop a landmark Montreal hotel.

In the experience economy, people want less stuff and more Instagram moments – or so the conventional wisdom goes. Whatever the case, Sid Lee Architecture’s complete repositioning of Montreal’s Fairmont The Queen Elizabeth Hotel is a masterstroke of experiential architecture. Best known as the hippie landmark where John and Yoko spent a week in bed, the newly revamped luxury and business destination now includes a lively, amenity-filled lobby, a trio of stylish food and drink establishments and, as of this year, Espace C2, a 220-person, rooftop event space that is the property’s literal crown jewel. 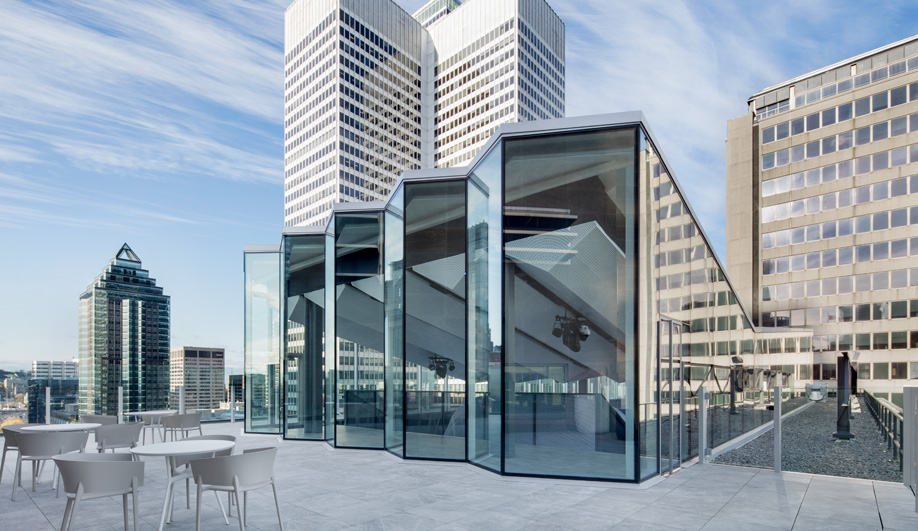 In a complete rethink of the hotel’s uppermost reaches – previously dedicated to exclusive Fairmont Gold suites – the hotel’s owners, operators and architects sought to make the space more egalitarian by opening it for hire by anyone. “We thought it would be special for the hotel to have a quasi-public rooftop space that people could rent and access for events,” says Jean Pelland, senior partner at Sid Lee. “Considering the amazing views, it was more exciting to build this type of venue, rather than something for a select few.” 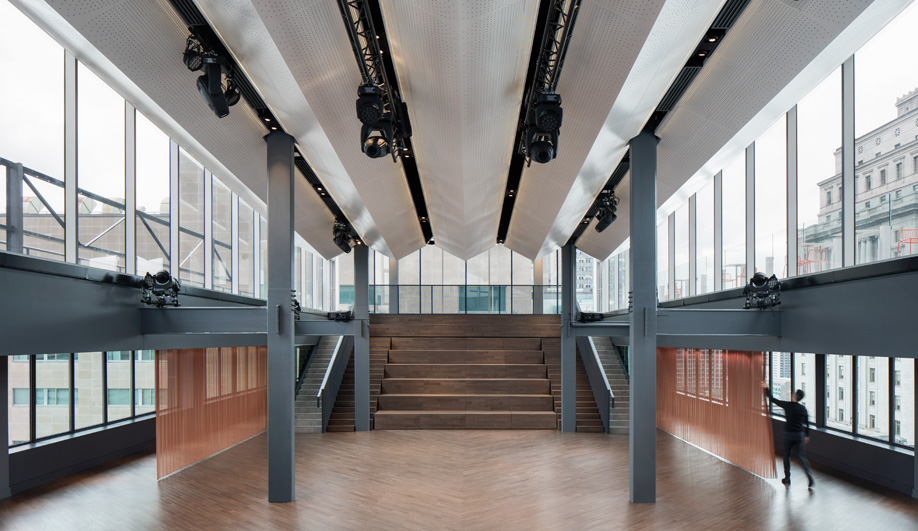 A retractable grandstand and modular curtain system allow the space to be easily reconfigured to suit any event.

Espace C2 is a terrace-wrapped, double-height glass cube topped with a dramatic butterfly roof. Housing a 290-square-metre auditorium, the facility is as stunning as it was structurally intensive to complete. The architects punctured the hotel’s existing roof to create a new volume with the necessary ceiling height (and mechanical infrastructure) to accommodate a variety of events, from weddings to corporate conferences to elaborate celebrations designed to impress clients. The main inspiration for the flexibility of the space was Sid Lee’s own annual C2 creative conference: a unique networking experience that includes team-building workshops where participants sit in chairs suspended from the ceiling, whimsical “labs” where attendees assemble giant layer cakes, and the odd circus performance thrown in for good measure. 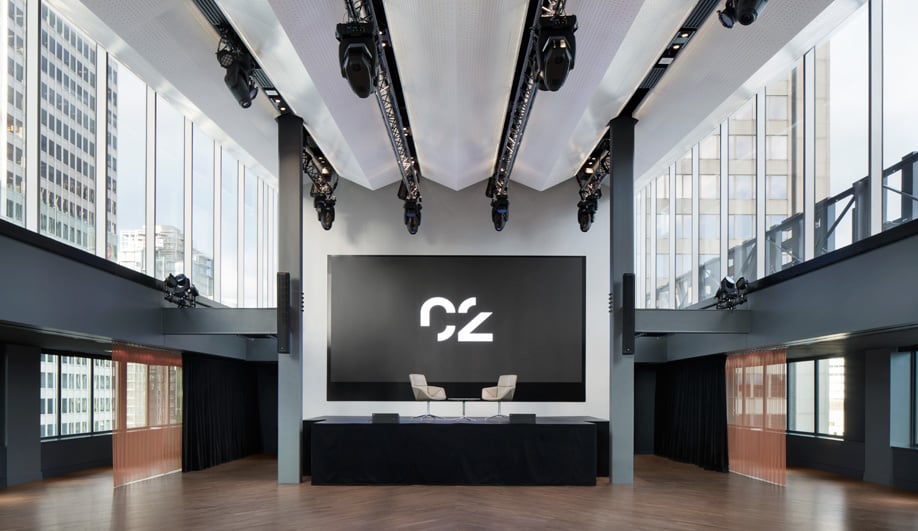 Inside the venue, built-in features at either end of the floor plan rise into the structure’s soaring wings, echoing the angles of the roofline overhead. A grandstand ascends into the glass cube at one end of the space, while the opposite side is anchored by a stage and a three-by-six-metre LED screen. The auditorium’s buttressed columns connect with the original building’s structure, enabling the glass cube’s greatest feat of daring: the floating effect of the roof. 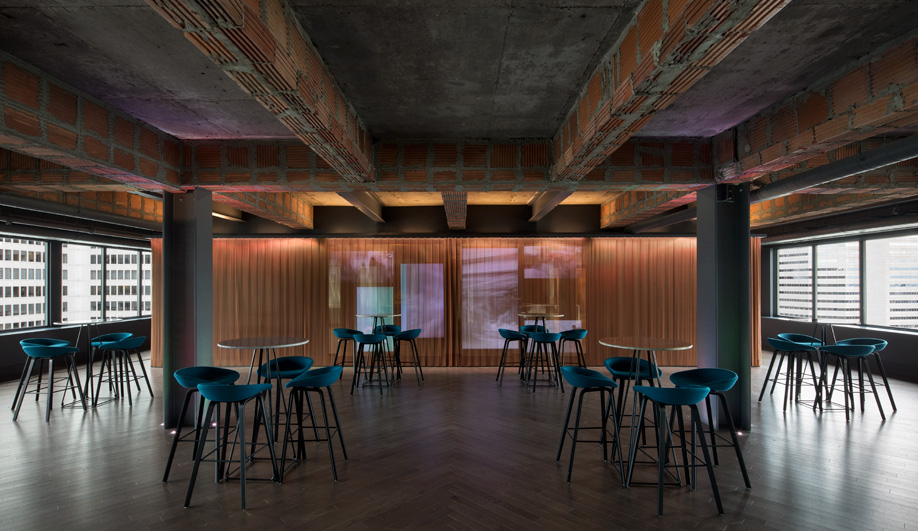 Pre-function and breakout rooms bookend the open main space, which is easily reconfigured: A modular system of copper mesh curtains divides the room into smaller spaces, while the middle section of the grandstand can be retracted to open up the floor. Given the pared-down aesthetic, a lot of the rooftop venue’s wow factor resides in its highly Instagrammable location atop the Queen Elizabeth, the birthplace of the Fairmont’s signature Gold accommodations. Already being touted as a prototype, Espace C2 is poised to follow in its predecessor’s footsteps – or footprint, as it were – and become yet another trademark space. 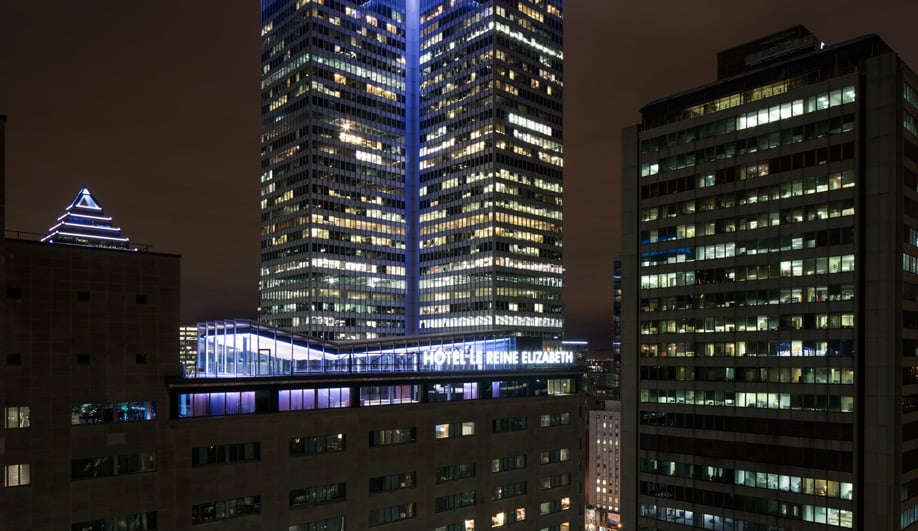