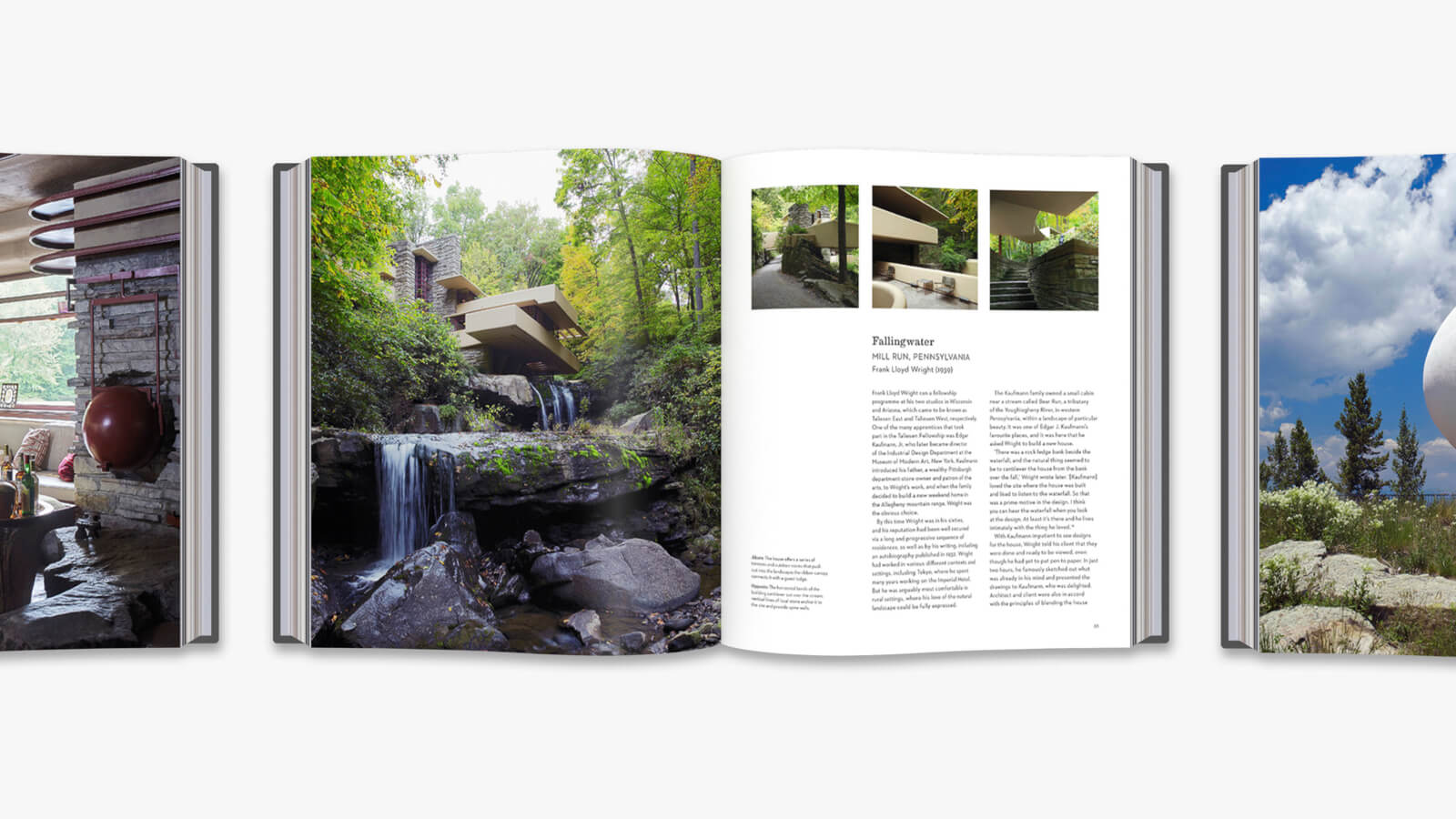 With the holiday season taking on a much different shape this year, these recent releases, monographs and more are sure to please any architect, designer or enthusiast on your list.

The holiday season is just around the corner, but things are looking a bit different this year. Elaborate Christmas parties, boisterous family gatherings and more celebrations must take a decidedly more intimate approach. So, too, does gift giving. What better way to share the holiday spirit — near and far — than with a good book? From the latest tomes on the history of chairs and iconic houses to social architecture and the lineage of information graphics, here are our top picks for reads that are sure to please any distanced design lover. 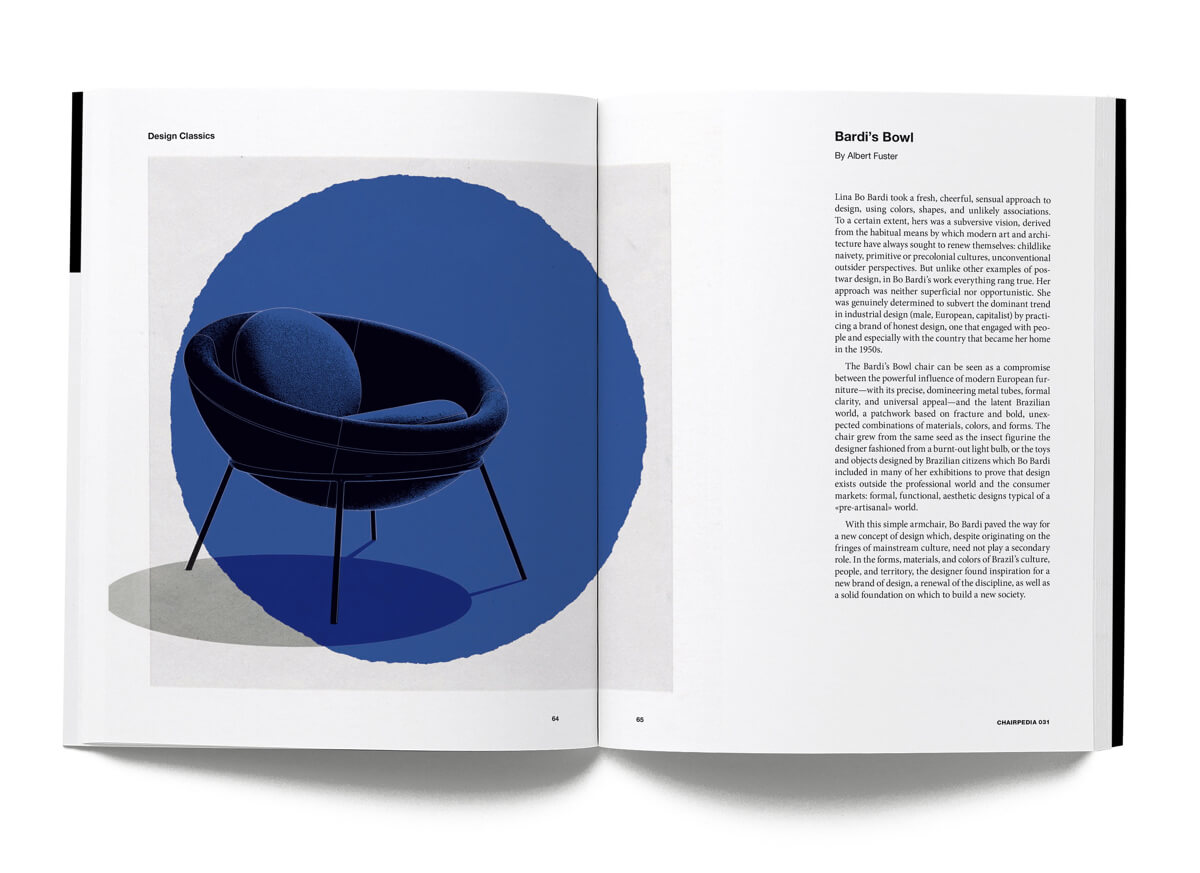 For Spanish furniture-maker Andreu World, it all started with a chair. In the early 1950s, at the age of 17, cabinetmaker Francisco Andreu began designing his first chair. Fashioned after popular yet anonymous styles of the time, Model 1 went into production in 1955, with Andreu delivering his homemade creations to furniture stores using a wheeled cart. It’s fitting then, that to mark its 65th anniversary, the Valencia-based family business has published a coffee table book devoted to the history of what they see as the “undisputed monarch of the furniture world.” 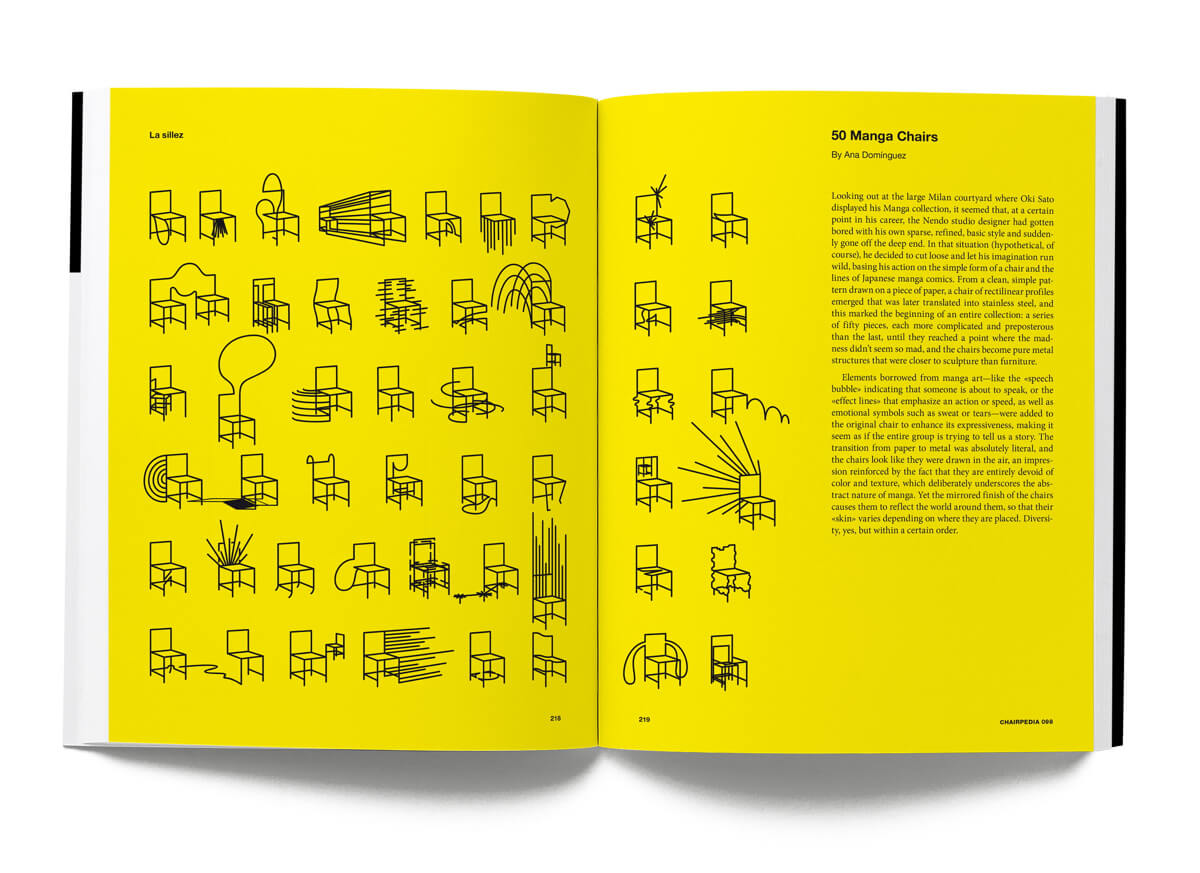 While its title implies reference guide, the book is actually a collection of entertaining short essays and personal anecdotes by notable architecture, design and art historians. Celebrating the iconic and the humble in equal measure, the individual reflections are each presented with original artwork by graphic designer and illustrator Antonio Solaz, who was given complete creative freedom to interpret the stories in his own way. And rather than a straightforward timeline, the 12 chapters chronicle the history of the chair through themes like Popular Culture, Spanish Classics, Seats of Power, Movie Designs and others, letting the reader chose where to enter the narrative. Whether consumed in one go or picked up from time to time, the bite-sized stories and beautiful illustrations will make a delightful distraction throughout the long winter months.

2
The 99% Invisible City: A Field Guide to the Hidden World of Everyday Design by Roman Mars and Kurt Kohlstedt 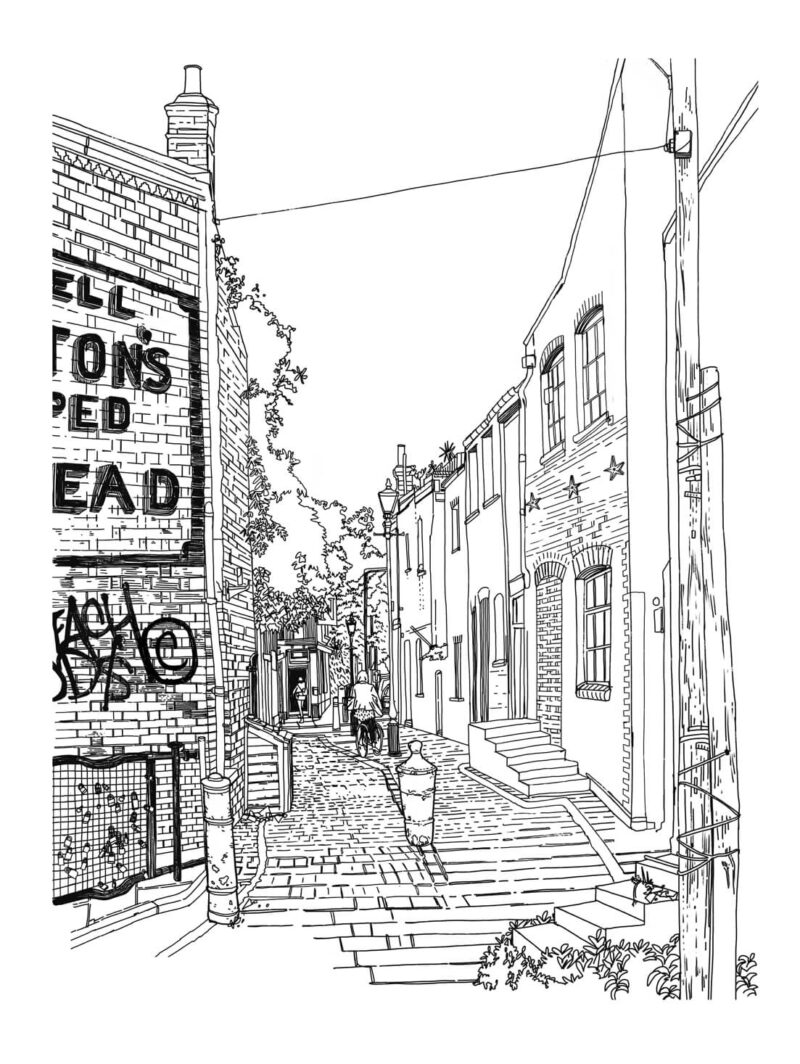 Q&A: 99% Invisible’s Roman Mars on His New Book and Looking Closely at Cities
“Even though it’s a guide to the city,” says the podcaster of his new publication with Houghton Mifflin Harcourt, “it’s really about wherever you’re looking.”
Read More 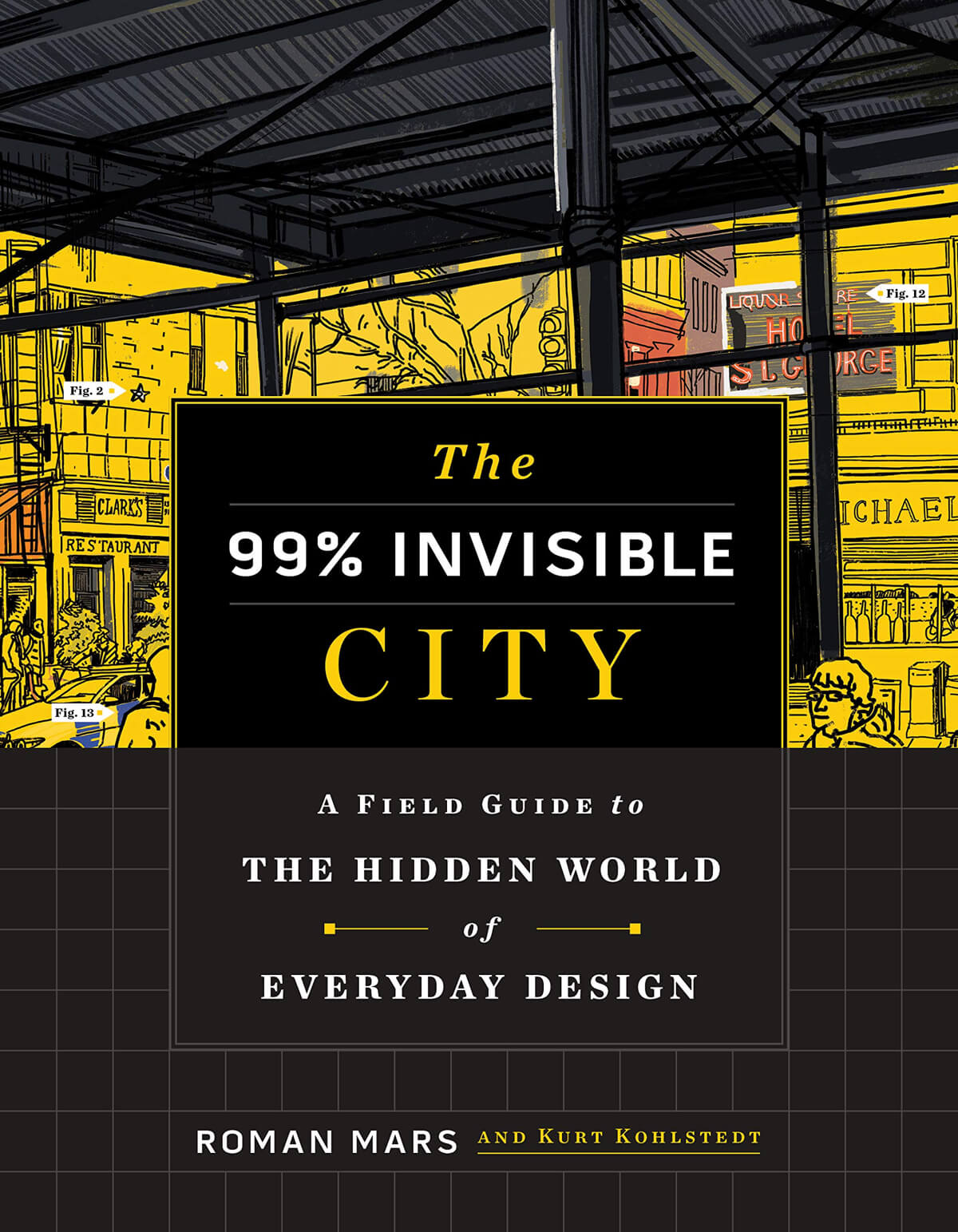 Not sure what book to get for the difficult design lover on your list? Our suggestion is one that covers every corner (literally) of the built environment. Borrowing its title from the wildly successful, decade-old podcast of the same name, The 99% Invisible City by Roman Mars and Kurt Kohlstedt explores the innocuous objects, places and spaces that fundamentally shape our lives. From super highways and sidewalk markings to staircases that lead to nowhere (yet are actively maintained), the New York Times best-seller unpacks the strange histories of the many elements that often go unnoticed in metropolises across the world. “Once you start to see them,” Mars writes in the first few pages, “you’ll never understand how you didn’t see them before.” Brought to life by the rich illustrations of Patrick Vale, the digestible essays revel in the stories — small and large — that continue to make and remake urban centres. “Even though it’s a guide to the city,” Mars recently told Azure, “it’s really about wherever you’re looking.” Once you start reading, you won’t be able to stop. 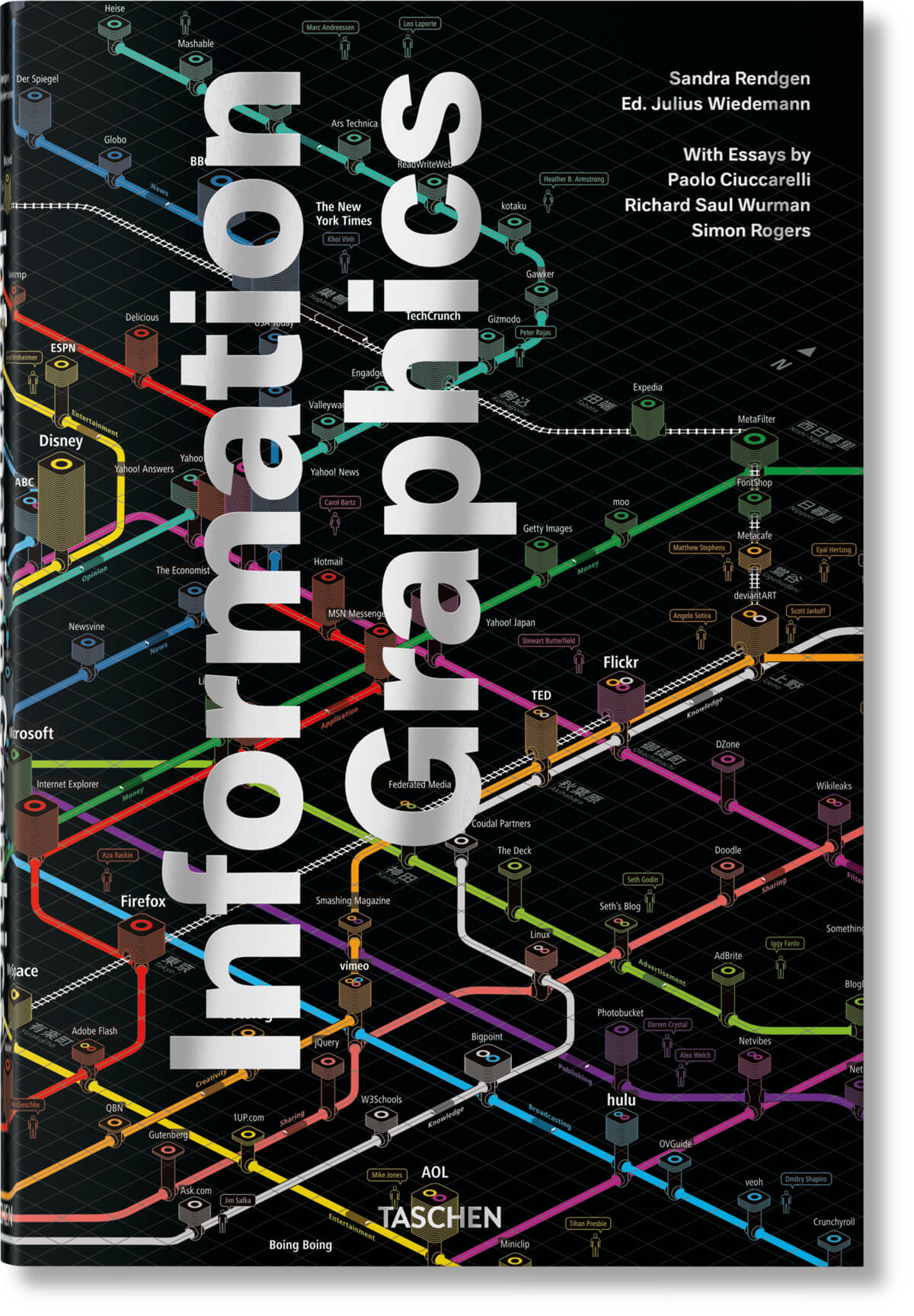 More than ever, we live in an age of big data. Whether it’s the imagined numerals of finance, the unfathomable tonnes of carbon output, the scales of population growth or the surprising quantity of published biographies of Frank Zappa, we understand our world through information. But to most of us, raw numbers are just that — and it’s only through data visualization that the decimals become translated into a tangible reality. Edited by Sandra Rendgen with Julius Wiedemann, Taschen’s Information Graphics is an elegant survey of the structures of 21st century knowledge production. 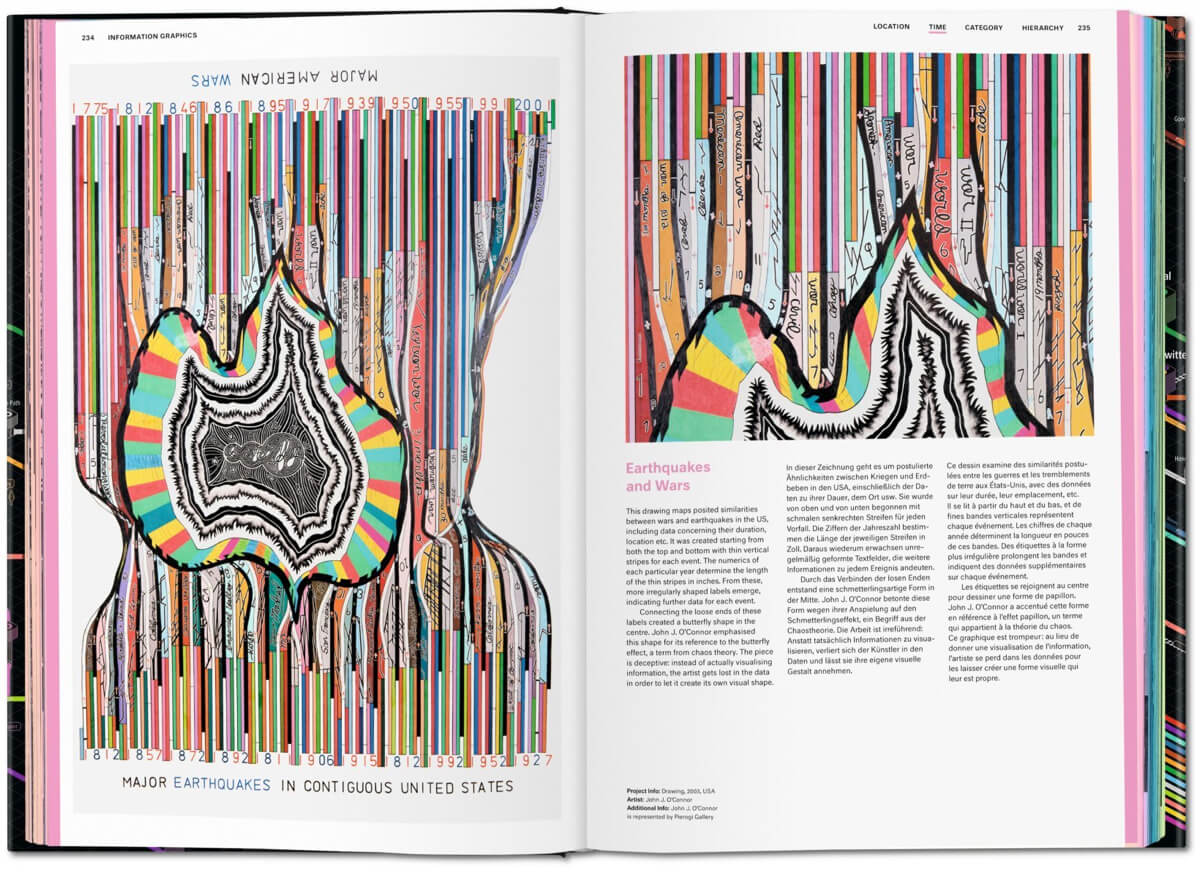 Featuring immersive visuals — and essays by the likes of Palo Ciuccarelli, Richard Saul Wurman and Simon Rogers — a rich collection of graphics coalesces into a thought-provoking analysis of how we understand the world around us. Take, for example, John J. O’Connor’s visual chronology of American wars and earthquakes. Represented by stripes and numerics that convey location and duration of each event, the labels collide in a chaotically beautiful centre that evokes the randomness of the butterfly effect. Information becomes expression — hinting at the deeper ontological mystery behind the data. In other words, what good is the science of numbers without the art of understanding? 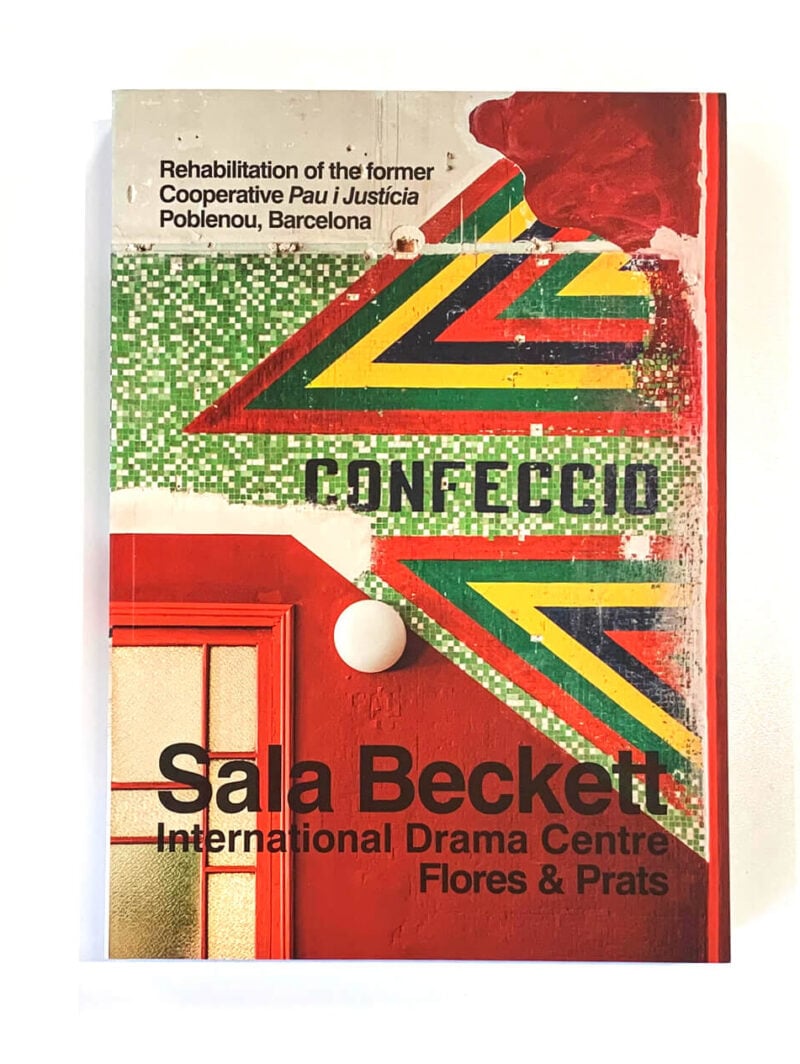 8 Must-Read Architecture and Design Books This Summer
Though the warmer months may be waning, that’s no excuse not to indulge in the latest designer tomes — here are our top picks.
Read More 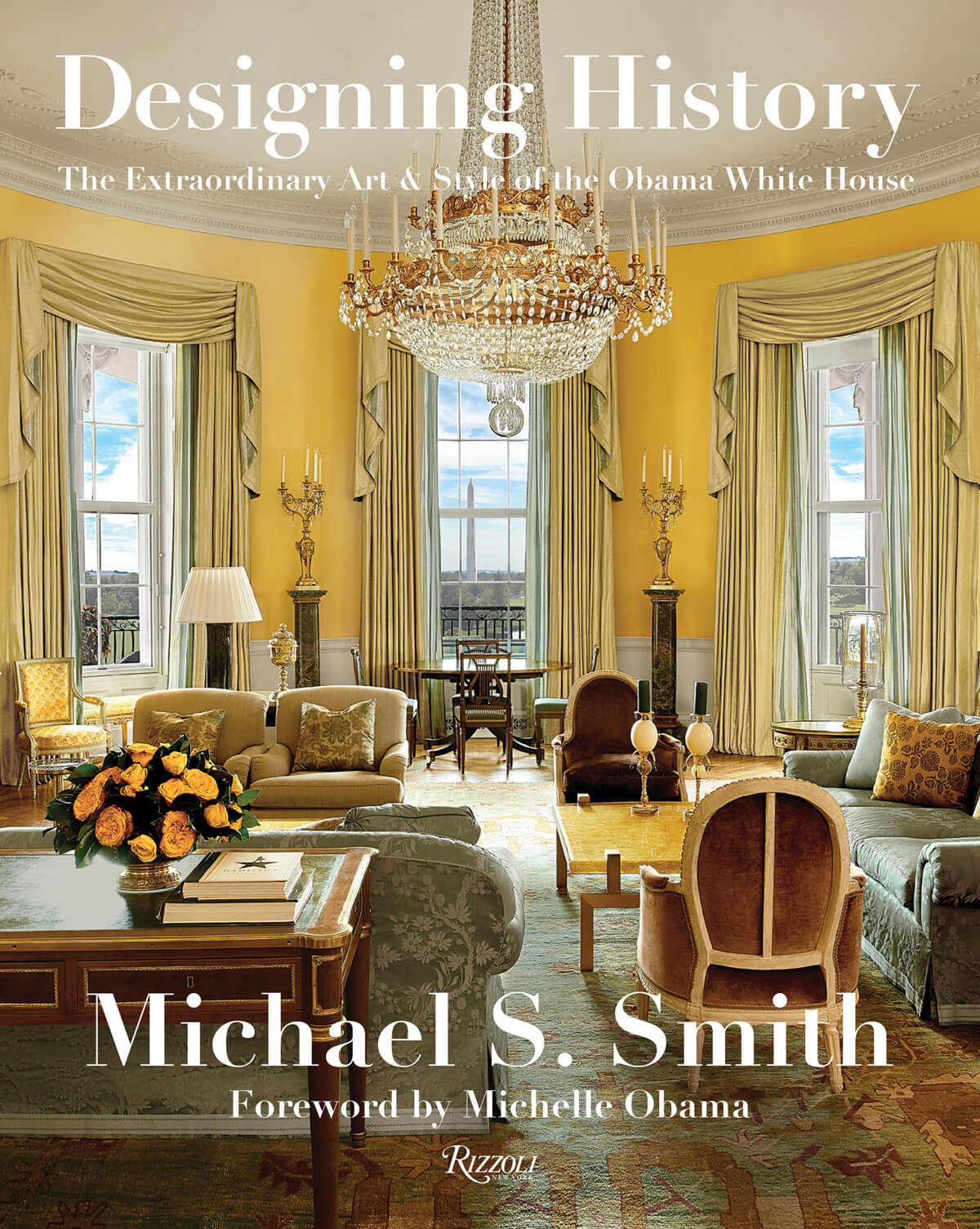 When Barack Obama was succeeded by Donald Trump in 2017, the departing U.S. president not only gifted his replacement with a quick and seamless transition, but with an exceptionally beautiful new home as well. Under the Obamas, the White House underwent one of the most extensive decorative overhauls since probably the 1960s, when Jackie Kennedy famously renovated. In this new book from Rizzoli, which the publisher describes as “both a historical document and a voyeur’s delight,” the process as well as the results are exquisitely detailed, with the vision of noted interior designer Michael S. Smith expertly distilled by former Architectural Digest editor Margaret Russell. 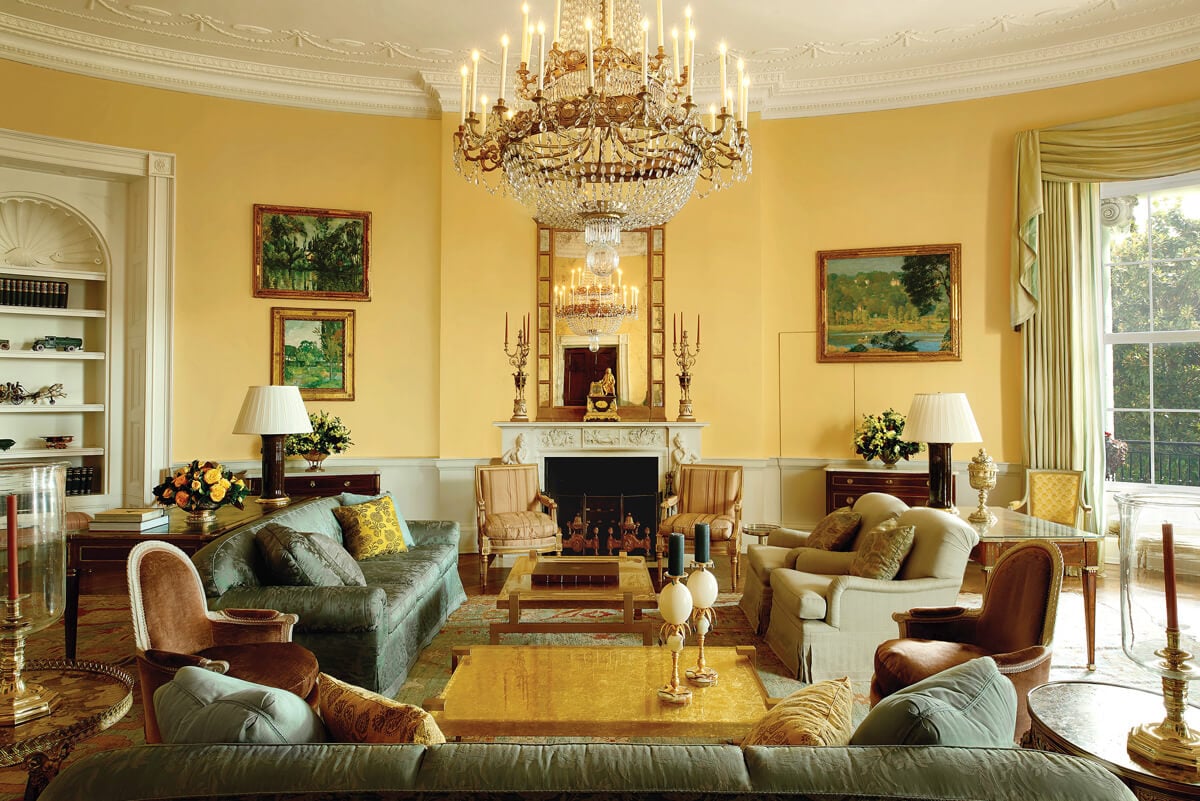 Having consulted with former First Ladies including Nancy Reagan and Laura Bush, Smith adopted a respectful yet transformative approach to the job, which was more modernization than outright reno. Among his primary interventions were the introduction of a lot more vibrancy, pattern and contemporary art (including works by artists of colour), the creation of delightful kid-friendly rooms (Sasha and Malia’s rooms are visual highlights) and the use of LED lighting to brighten up some of the residence’s notoriously dark corners. Given the predilection of the current occupants for glitz and glam, it’s uncertain how much of Smith’s work has been retained, which is likely okay with the designer, who considers the White House an “evolution.” Even so — and considering what the place may look like now (Mrs. Trump’s Rose Garden overhaul, anyone?) — this book is a valuable document of record. 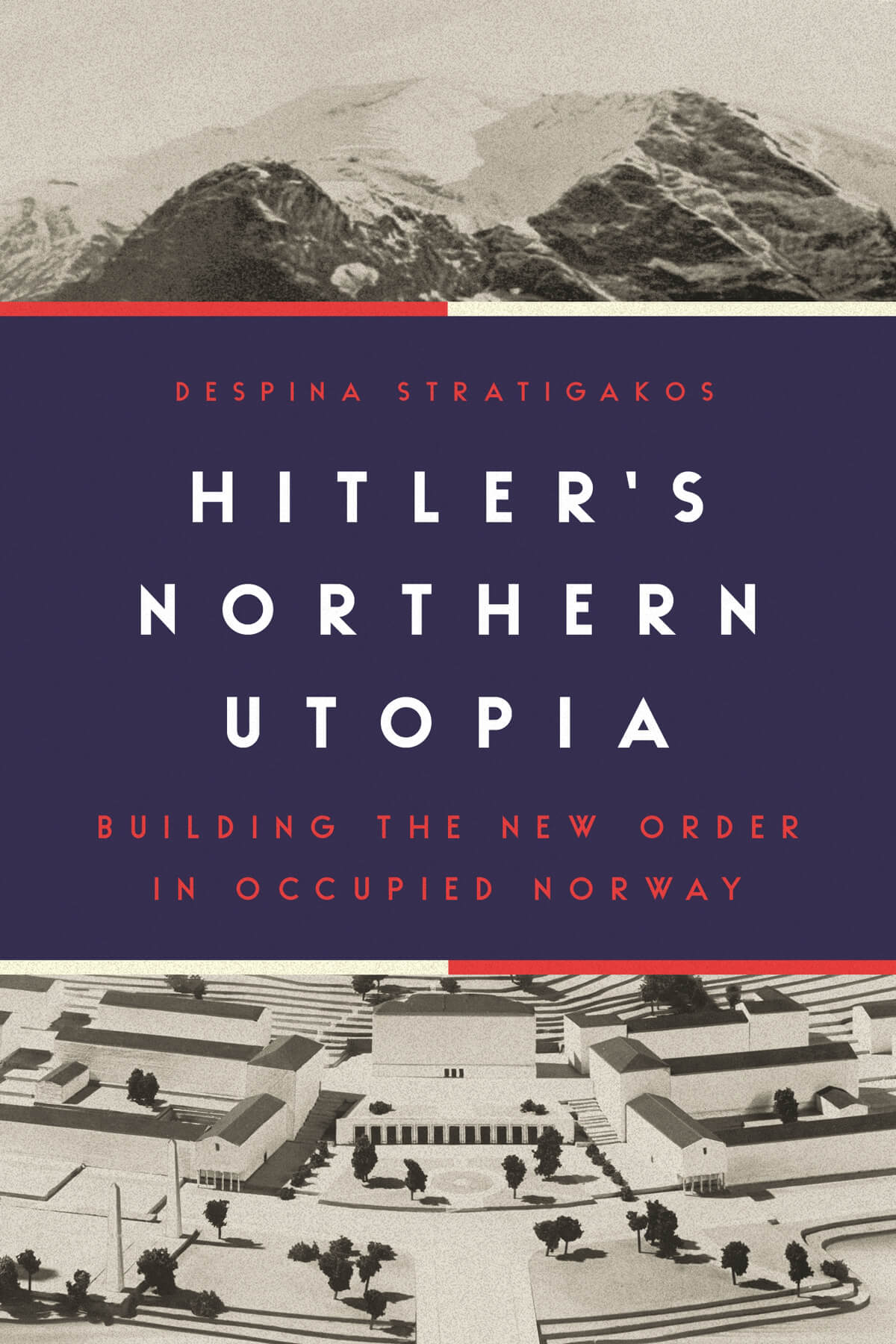 As WWII decimated much of Europe, Norway was under construction. Annexed by Nazi Germany in 1940, the Scandinavian nation became a test-bed for a new racial — and architectural — utopia. Guided by Hitler’s “Aryan” ideology, architect Albert Speer laid the plans for the cities and civic infrastructure that would foster a new generation of Vikings.

In Hitler’s Northern Utopia: Building the New Order in Occupied Norway, architectural historian Despina Stratigakos mines a little-known chapter in 20th century history with insight, clarity and encyclopedic rigour. From the vision to re-fashion Trondheim into a new cultural capital to the scheme for an imposing super-highway linking the new city to Berlin, the book chronicles a darkly fascinating saga. It’s a chilling vision of the world as it could have been — and a reminder of architecture’s role in creating it.

6
The Iconic American House: Architectural Masterworks Since 1900 by Dominic Bradbury 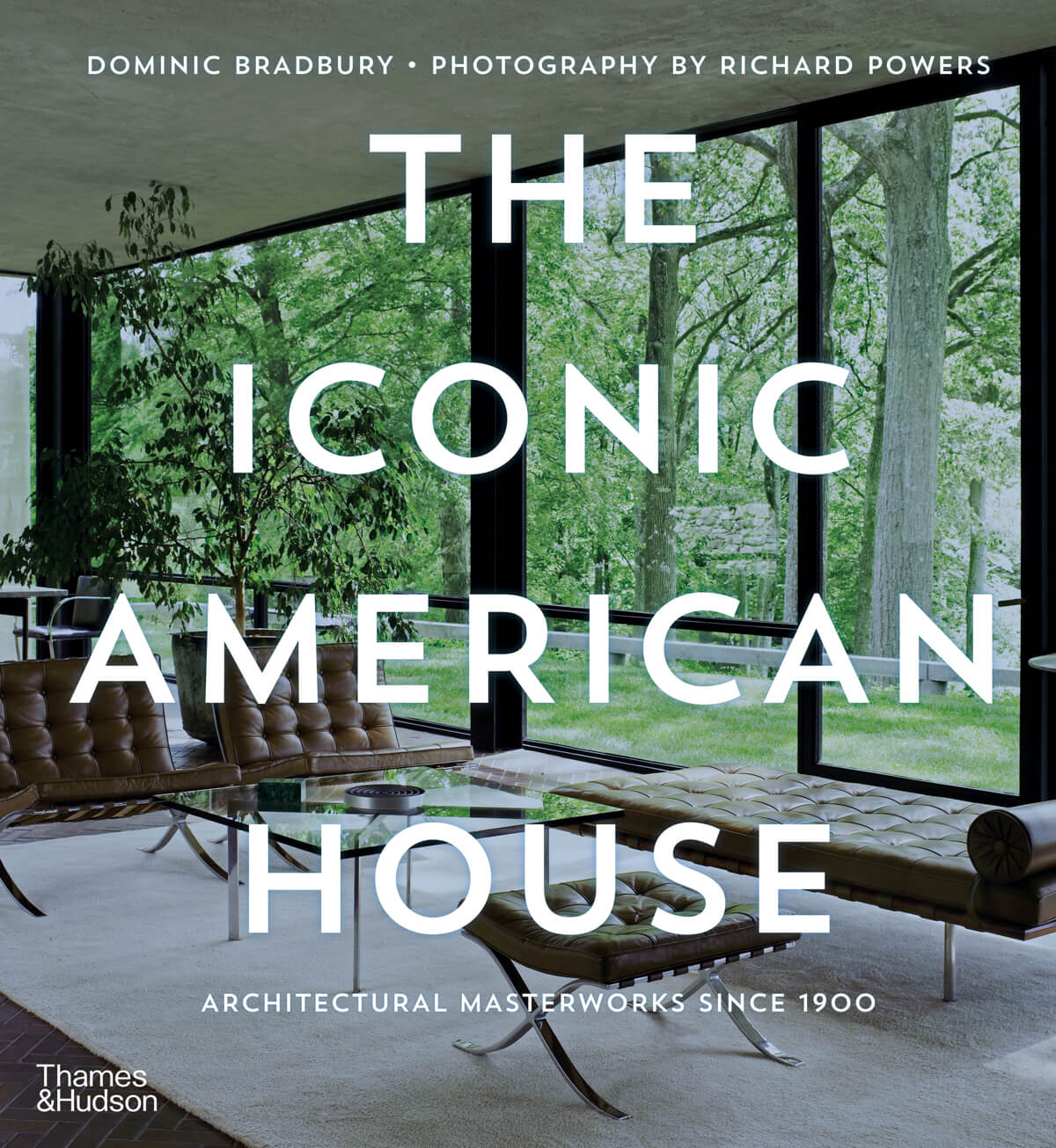 The United States is the birthplace of the modern skyscraper, the suburban shopping mall and other commercial paradigms, but it has also made distinct and important contributions to residential design, especially as the country’s wealth and confidence grew over the last 100 years. This is abundantly clear — and gorgeously elucidated — in The Iconic American House, Dominic Bradbury’s impressive survey of many of the U.S.’s most significant homes, from the sleek desert masterpieces of Palm Springs to the sprawling beach houses of Fire Island to the midcentury wonders of Columbus, Indiana. 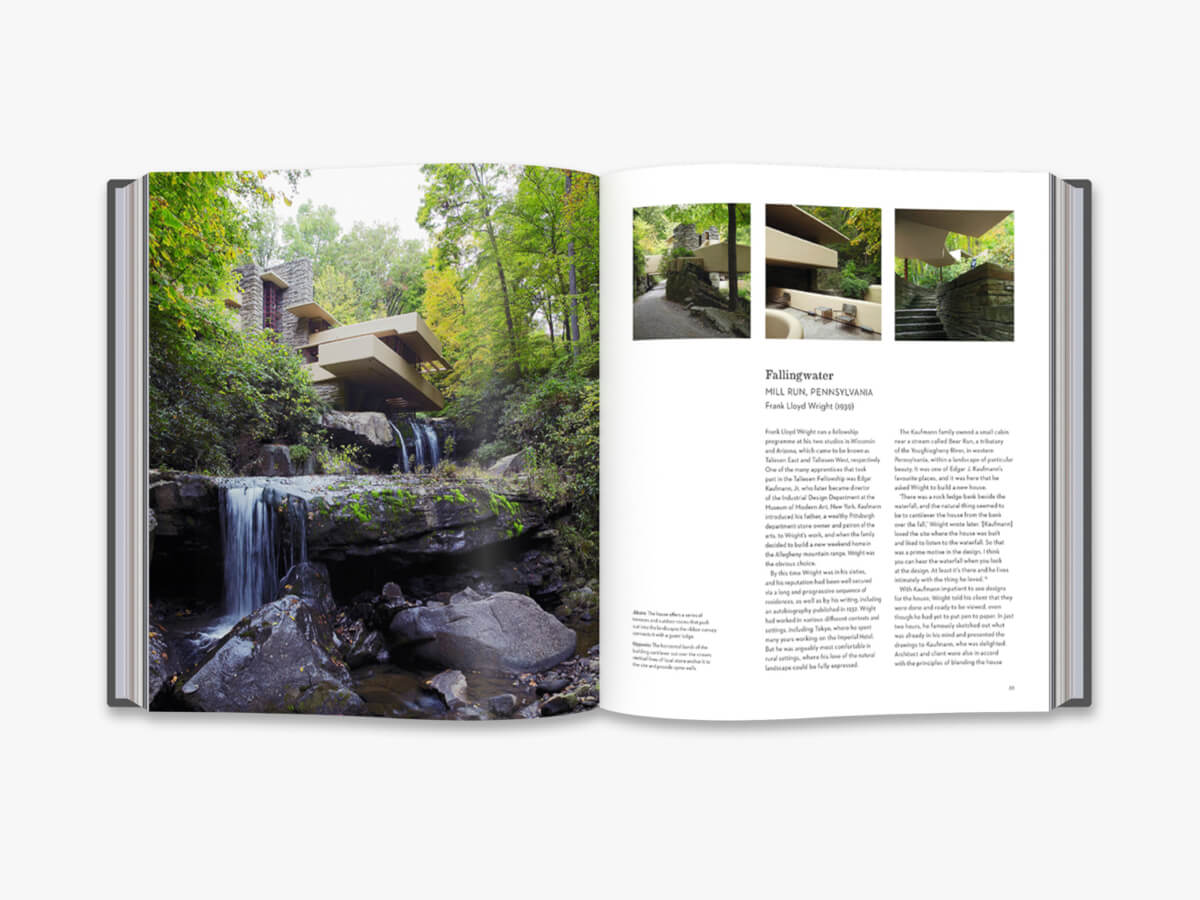 Published by Thames & Hudson, the array includes the work of the expected U.S.-born greats, including Frank Lloyd Wright, Philip Johnson and Peter Eisenman. Not surprisingly for a country of immigrants, many of those represented — Walter Gropius, Richard Neutra, Ludwig Mies van der Rohe — came from elsewhere, although their output is as American as that of their native colleagues. That’s because, as the book makes clear, all of the houses profiled, diverse as they may be, share a remarkable sensitivity to site, an appreciation for local materials and an unusual understanding (except maybe in Frank Lloyd Wright’s case) of clients’ needs. How quintessentially — and refreshingly — democratic. 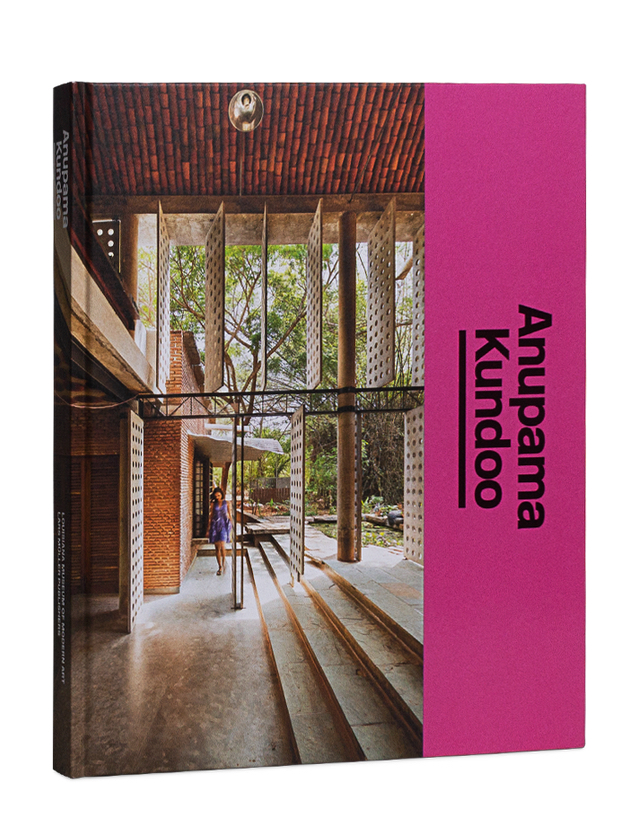 After relocating to the experimental planned city Auroville in southern India shortly after completing her studies in 1989, the now Berlin-based architect Anupama Kundoo began slowly forming her distinctive approach to building — one that combines vernacular practices, sustainable initiatives, deep wells of research and an acceptance of the time required for these to manifest. Released on the occasion of the major retrospective “Anupama Kundoo: Taking Time” at the Louisiana Museum of Art in Denmark (the fourth in the ongoing “The Architect’s Studio” series that has featured Tatiana Bilbao, Alejandro Aravena and Amateur Studio), the Lars Muller-published volume encapsulates almost 25 years of her work. 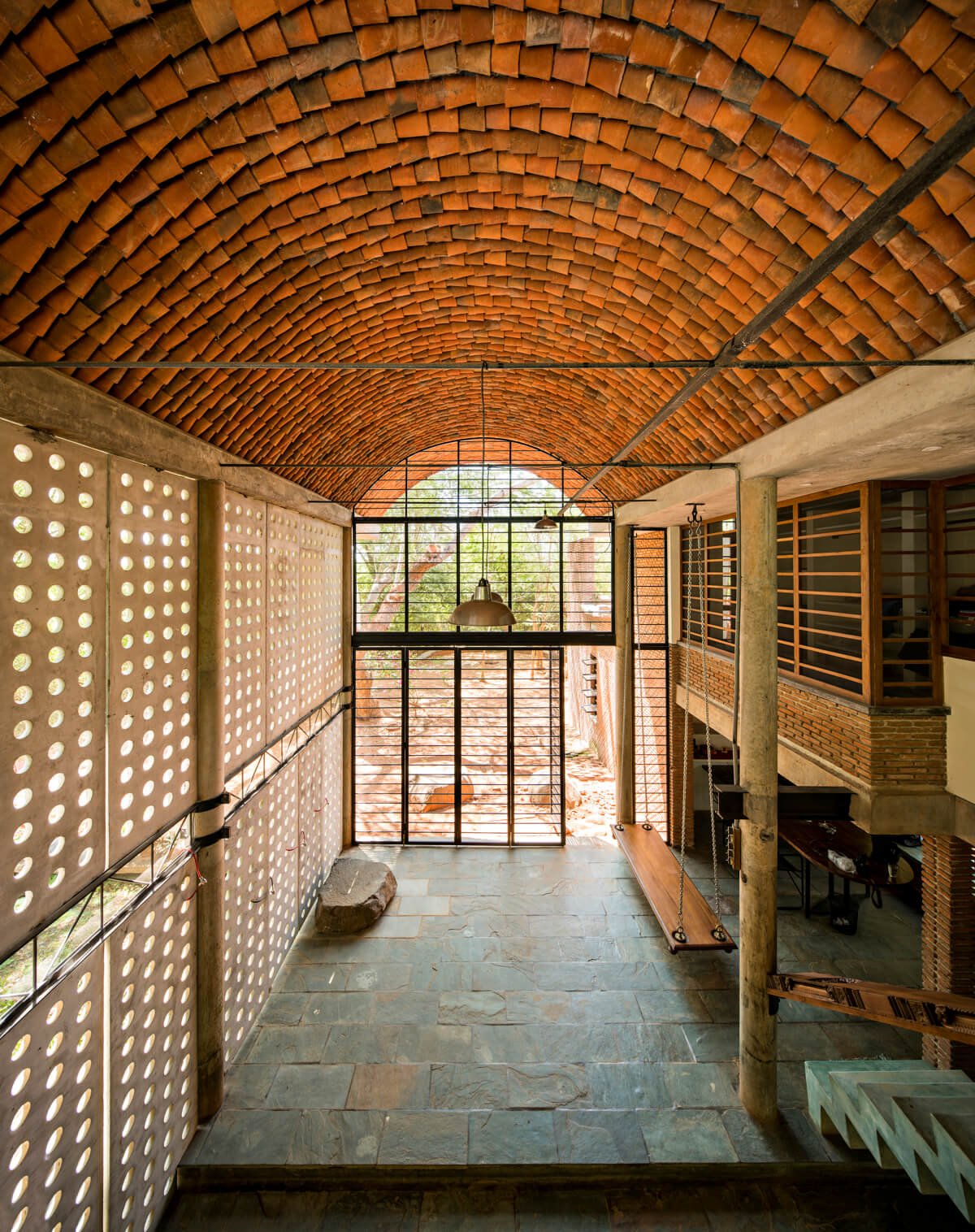 Within, an in-depth interview on “Slow Architecture” with Pritzker Prize executive director Martha Thorne accompanies an introduction by critic Edwin Heathcote. Both are complemented by richly illustrated project features on a number of residential prototypes in Auroville as well as social good initiatives like 2008’s Voluntariat Homes for Homeless Children in Pondicherry, India. Bookended by these and more recent structures, Kundoo’s essay “Taking Time” offers succinct insight into not only her process, but a kind of architecture suited for our particular moment. “We can reverse the notion that time is running out by getting time on our side, befriending it,” she writes. “Instead of trying to make time, we should take time.” It’s about time.

Plus, give the gift that inspires and delights all year long. Treat the design enthusiast on your list with a subscription to Azure!

With the holiday season taking on a much different shape this year, these recent releases, monographs and more are sure to please any architect, designer or enthusiast on your list.