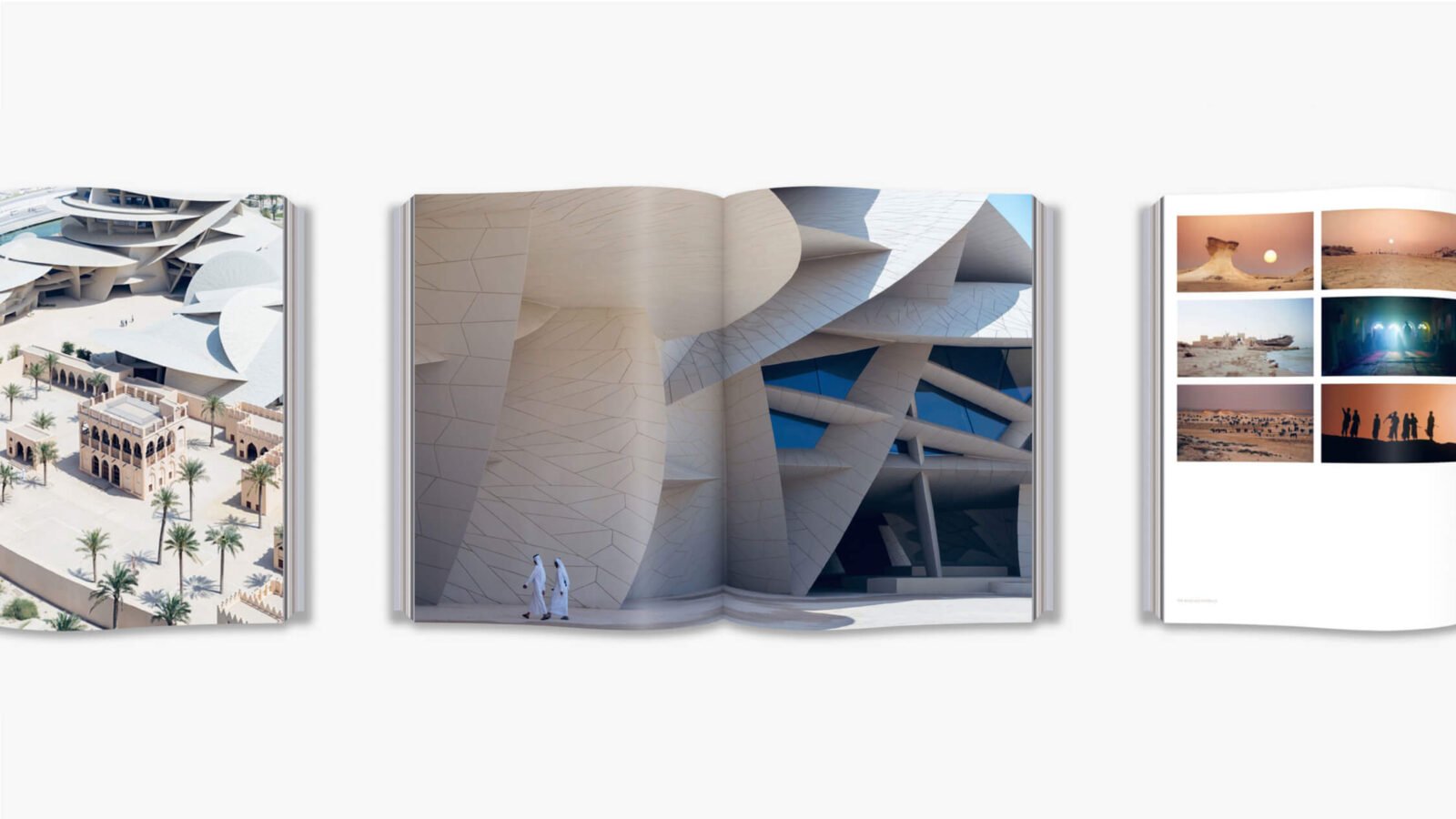 Though the warmer months may be waning, that’s no excuse not to indulge in the latest designer tomes — here are our top picks.

To say that this has been a summer for the (record) books is to put it mildly. But as the season comes to a close, there’s still time to enjoy the warmer weather and soak up some last-minute rays with a good read. From dense monographs to insightful takes on equitable space, here are the page-turners keeping Azure‘s editors enthralled: 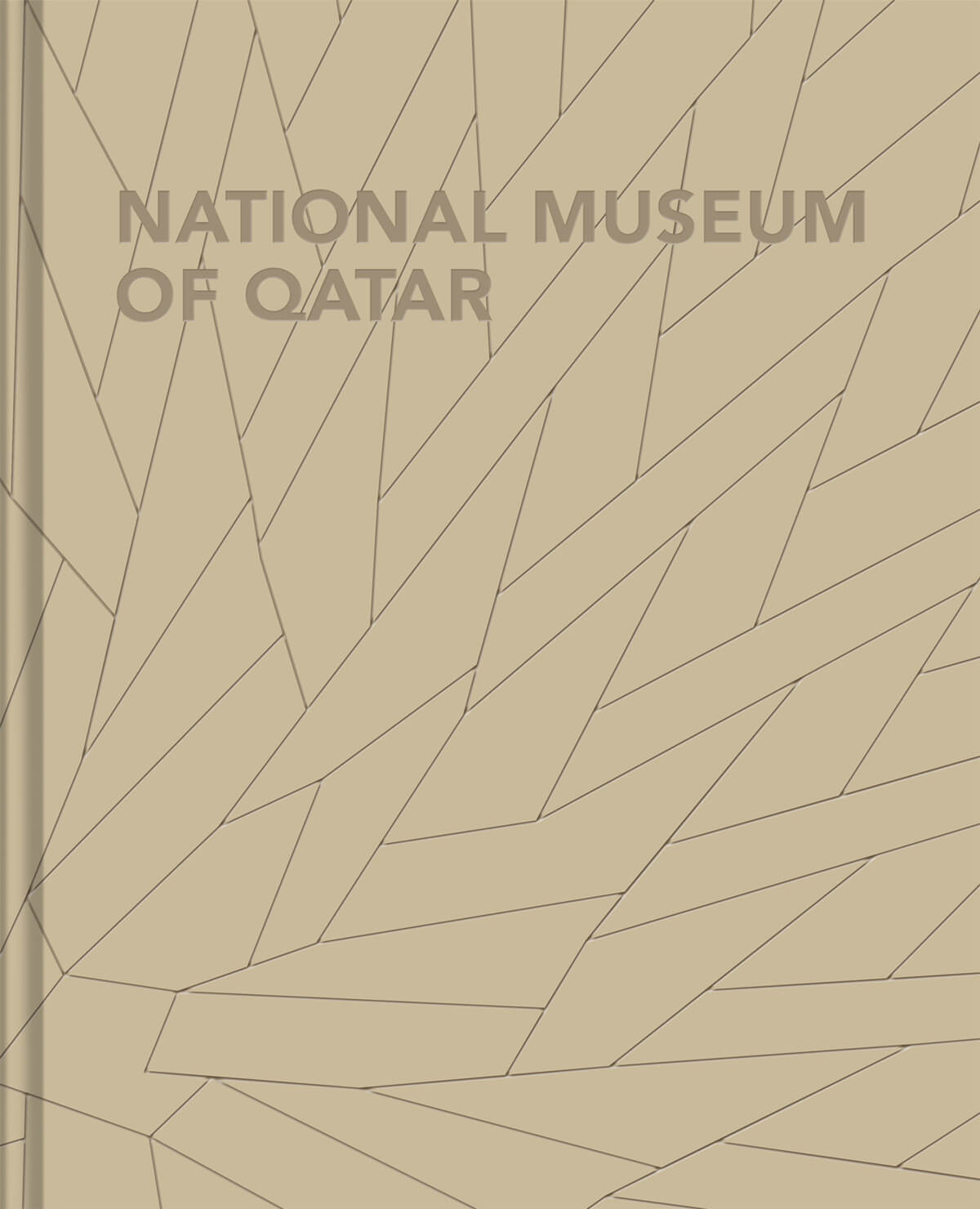 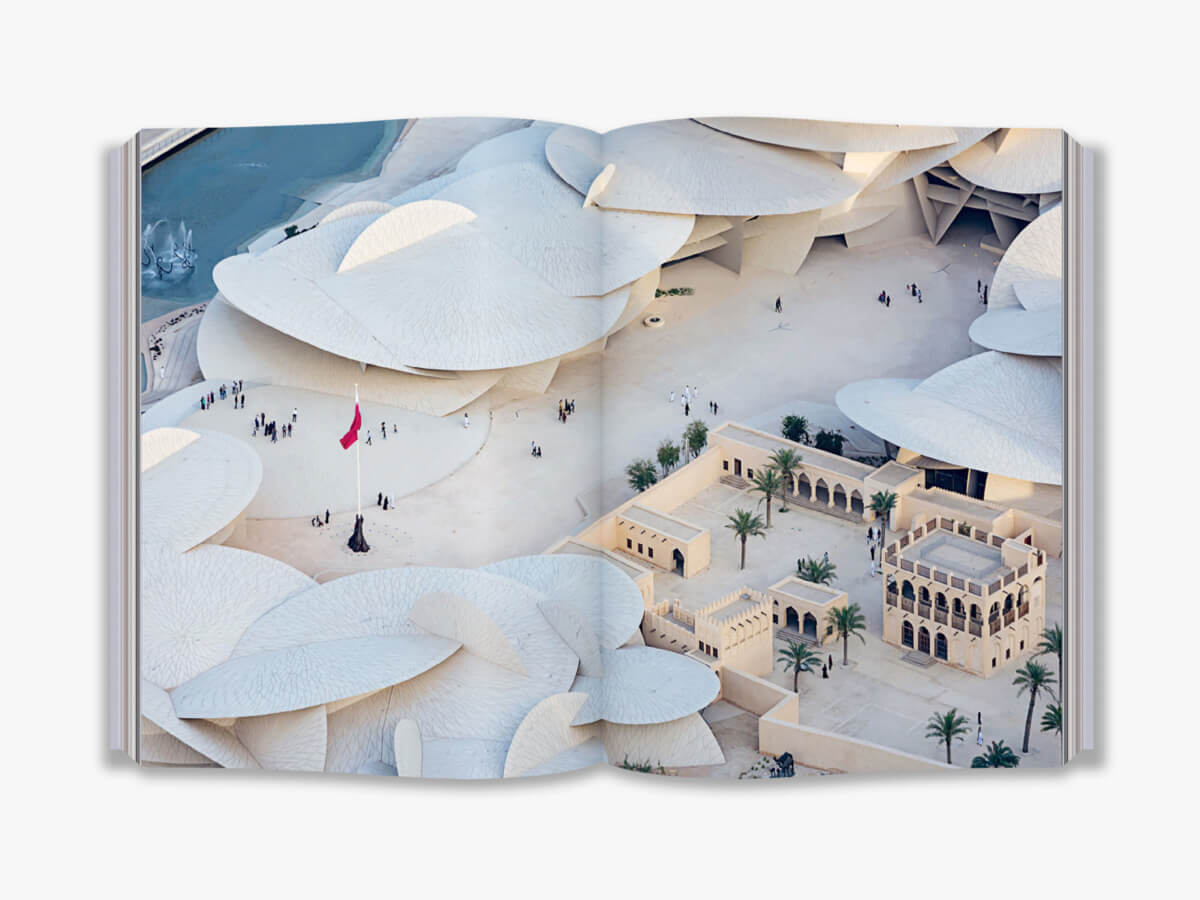 This book, published by Thames & Hudson to mark the opening’s first anniversary, more than does justice to the unique facility, cramming many of its 310 pages with sumptuous, full-bleed photos by Iwan Baan and Khalifa Al Obaidly. The text, by noted architectural writer Philip Jodidio, sheds light on just about every conceivable aspect of the museum, from its cladding to its contents. It’s the next best thing to being there (which, these days, is everything). —Danny Sinopoli 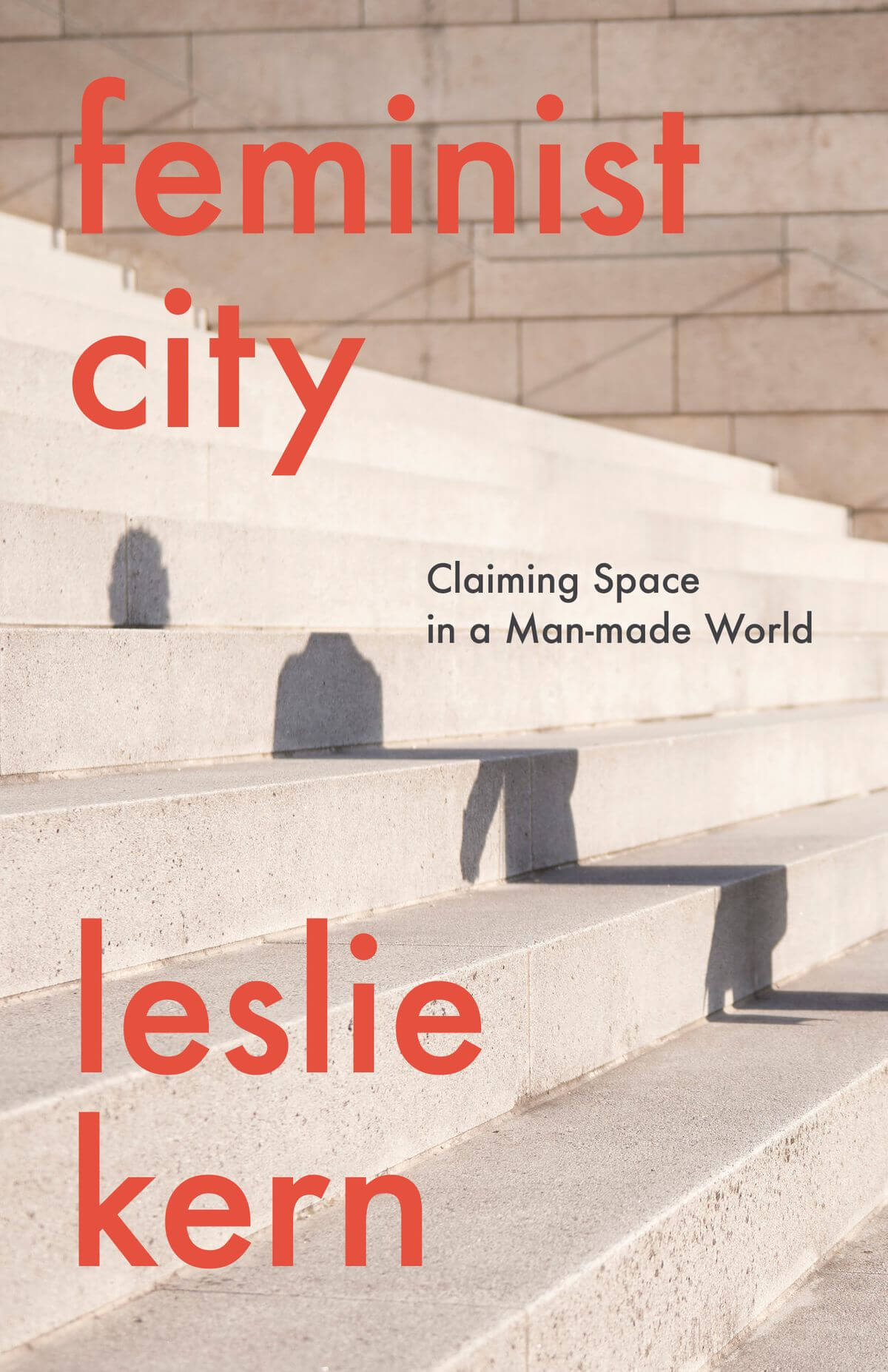 “Ask any woman who’s tried to bring a pram on to a bus, breastfeed in a park, or go for a jog at night,” writes Leslie Kern. “She intuitively understands the message the city sends her: this place is not for you.” In Feminist City: Claiming Space in a Man-made World, the author mines the gendered geographies of urbanity with a rare blend of polymathic flair and clear, unpretentious prose.

Kern’s deft integration of memoir with history, feminist theory and pop culture critique makes for a sweeping yet focused survey of urban life. From lucid prescriptions for transit systems built for strollers and improved access to public toilets to nuanced insights about the cultural geography of white suburbia, she illuminates the city as a space of repression and control, but also a wellspring of reinvention and possibility. In other words, a better future. —Stefan Novakovic

3
In Memory Of by Spencer Bailey 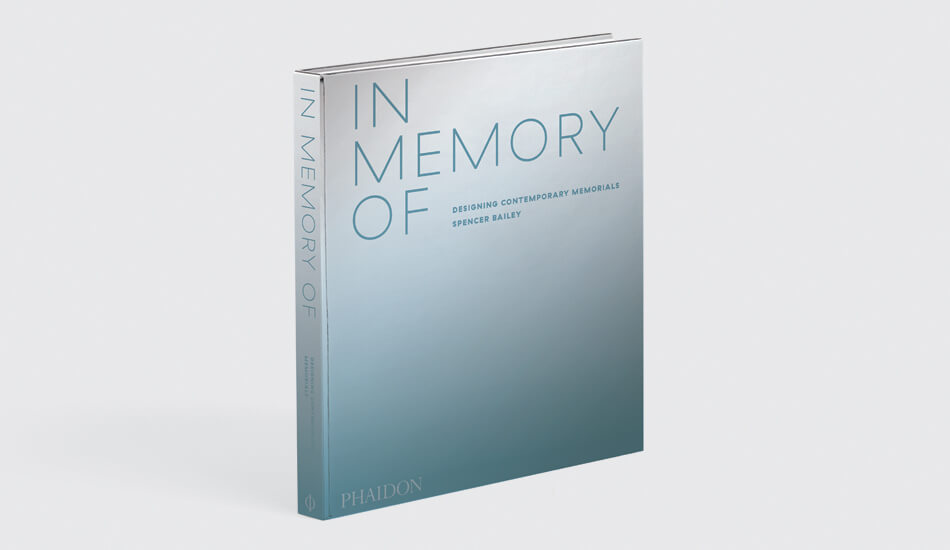 Memory is a fickle concept, even more so when applied to architecture. “Buildings are an unreliable means of prolonging memory,” historian Adrian Forty once quipped, “their records more prone to forgetting than remembering.” Considering the now global movement to remove colonial and confederate monuments while addressing the revisionist role they play, what compels us to continue erecting memorials? 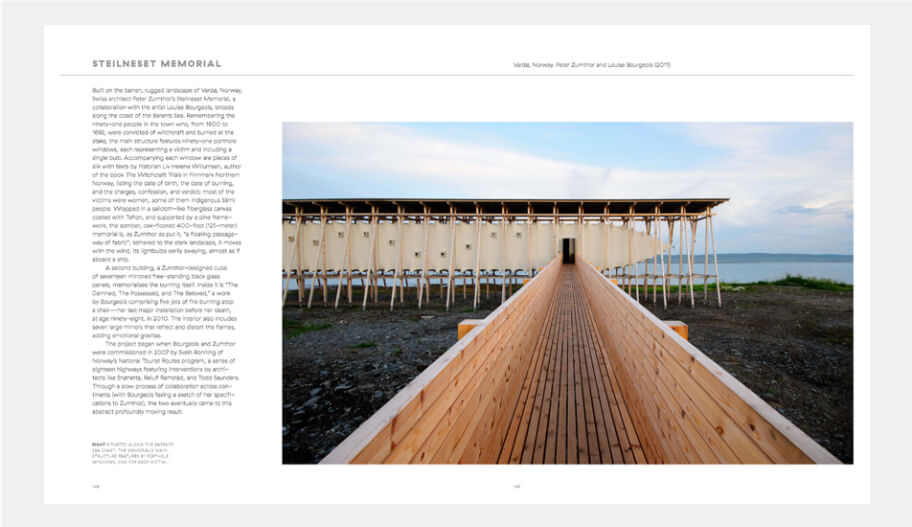 In Memory Of approaches this question with 60 contemporary projects that elucidate our complicated and enduring desire to commemorate and remember through building. Including such projects as Peter Zumthor’s Steilneset Memorial (commemorating the women suspected of witchcraft and subsequently burned at the site), Rachel Whiteread’s Judenplatz Holocaust Memorial and Studio AI’s NYC AIDS Memorial, the tome provides an important look at what the material expression of memory means for a plethora of communities — particularly those whose histories are often erased. —Evan Pavka 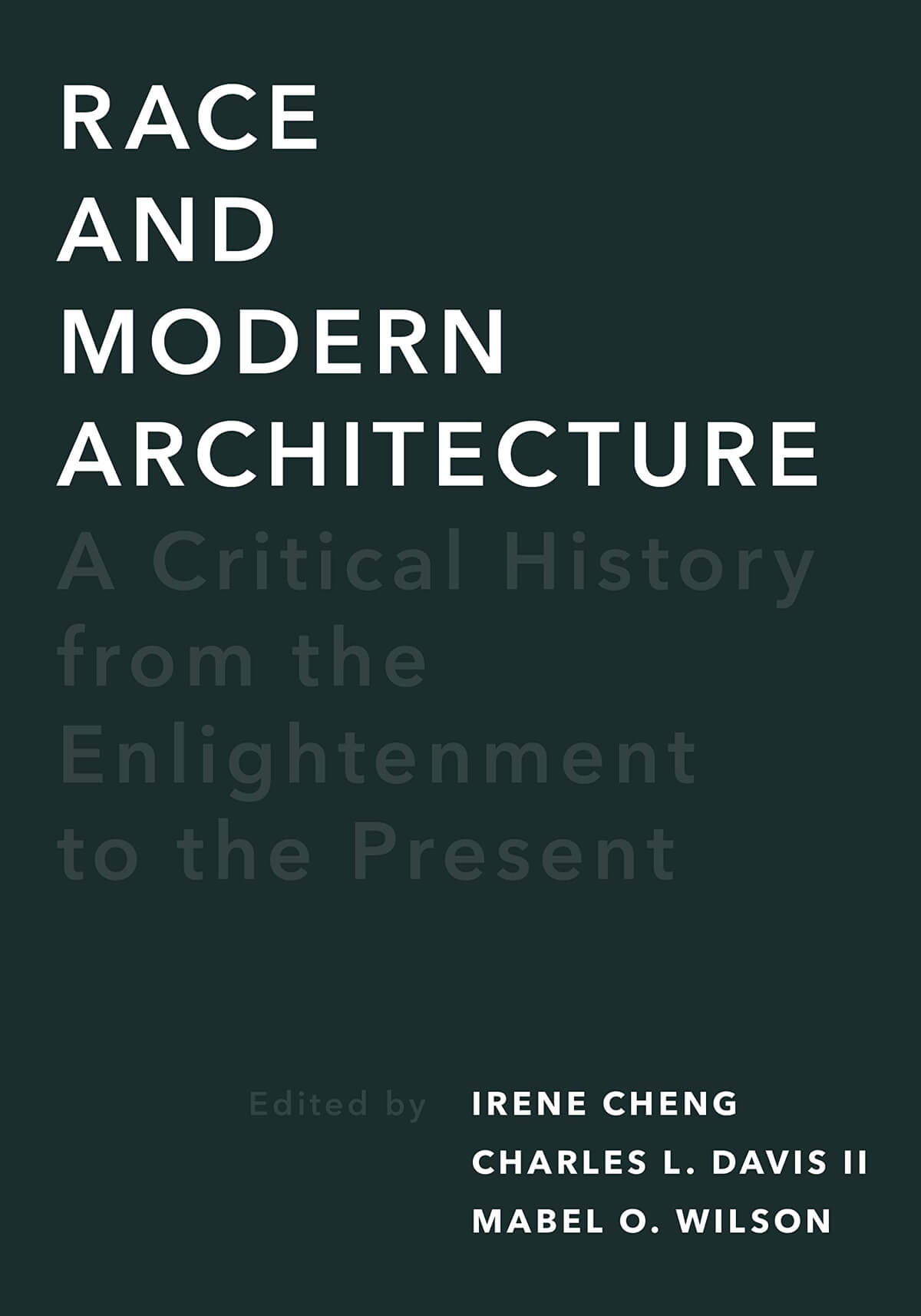 The incisive essays in this thought-provoking collection explore how “modern architecture has been intimately shaped by the histories of slavery, colonialism and racial inequality.” Race and Modern Architecture charts this history from 18th century neoclassical governmental buildings (like Thomas Jefferson’s design of the Virginia Statehouse, an ode to freedom “constructed in part by enslaved black workers”) to the “urban renewal” projects of cities like Detroit premised on the removal of “blight,” a term which almost always refers to non-white neighbourhoods.

And it takes aim at both the overtly racist policies and practices that have created inequitable urban places and the seemingly race-neutral depictions of modernist style: at both the mid-century real estate industry’s casual suggestion that violence be used to prevent desegregation in high-property-value white neighbourhoods and that same era’s advertisements and magazine layouts that depicted postwar American suburban homes as “a cultural ideal of white identity associated with cleanliness, order, property and the nuclear family.” The book’s observations might inspire a moral reckoning for adherents of modernism; its authors hope it is the beginning of a new genre of criticism. —Elizabeth Pagliacolo 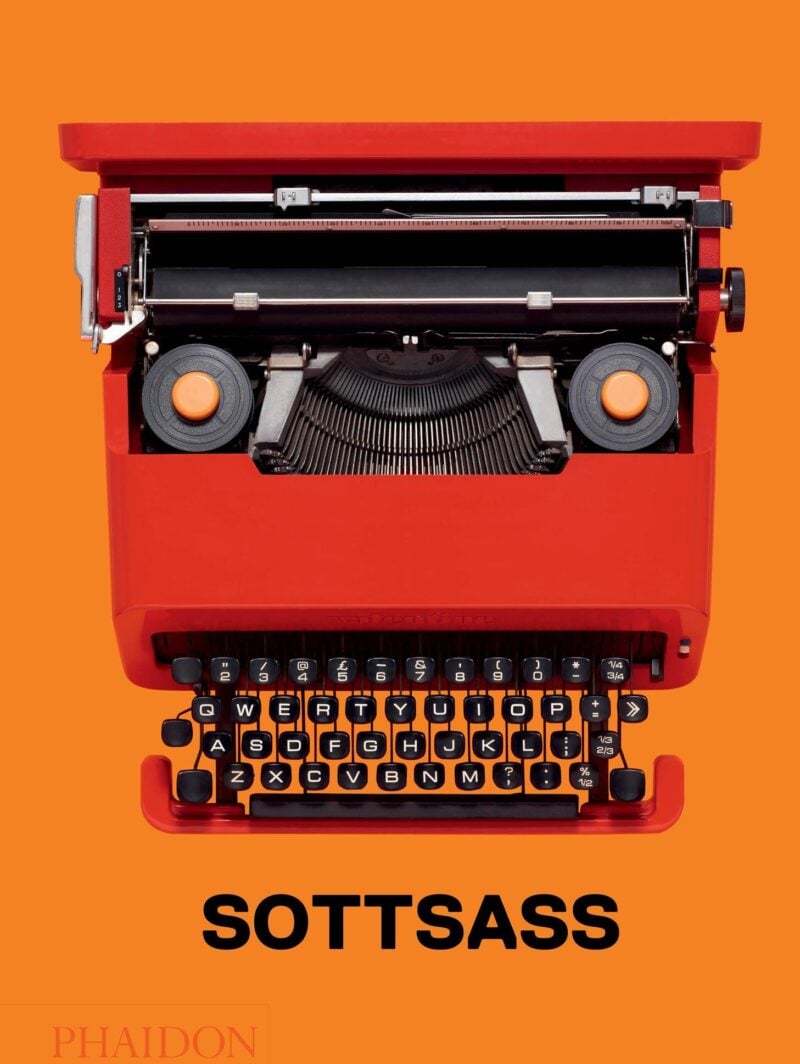 8 Insightful Design Books to Read While Social Distancing
If there’s a silver lining to self-quarantine, it’s the opportunity to (finally) tackle your bookshelf. Here’s what we’re reading.
Read More 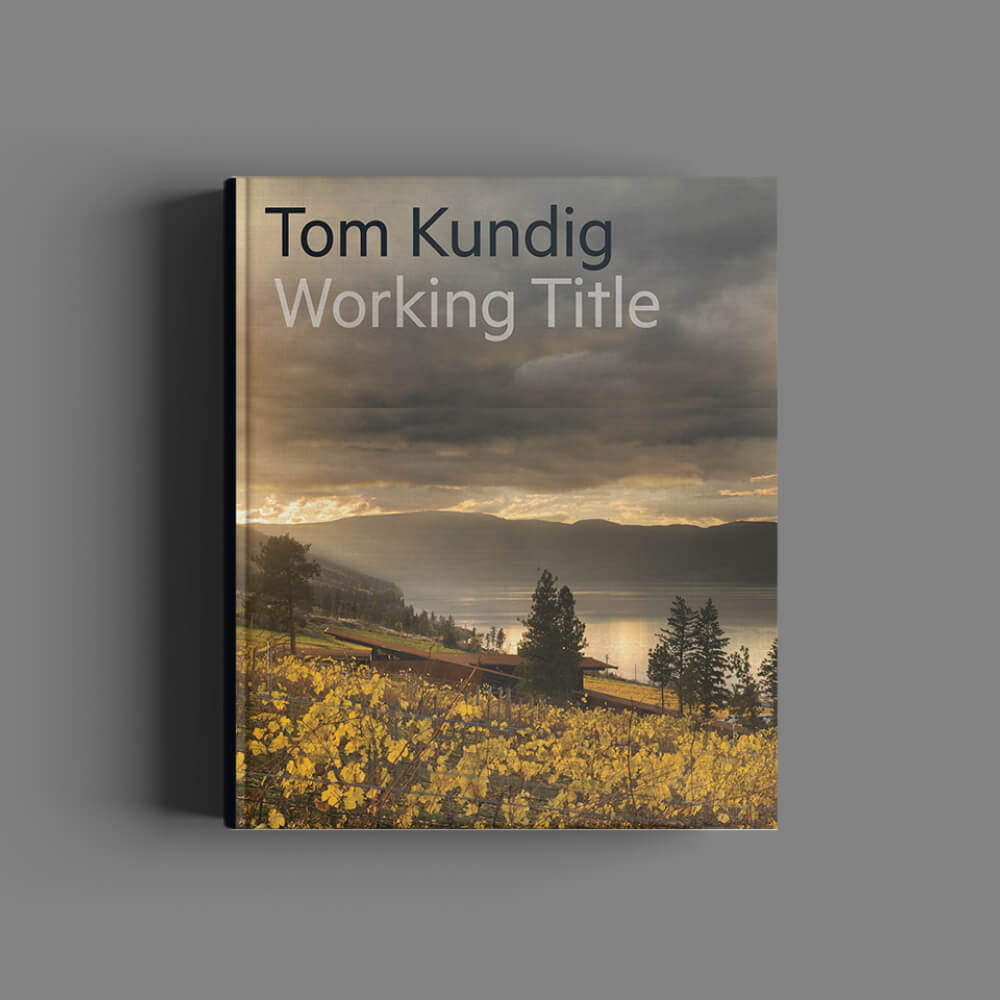 Chronicling just five years (2015 to 2019) in a decades-long career, Working Title by American architect Tom Kundig reveals a narrative that keenly understands the importance of context and place — and of how people interact with both the built and natural environments. The 29 globe-spanning projects depicted are diverse, ranging from intimate to large-scale: a private residence in a remote landscape, a winery positioned to take advantage of rolling vistas, a multi-storey, multi-use tower in the centre of a bustling urban setting. But they all share a commonality that has become the signature of Seattle-based Kundig: a hyper-focused attention to detail, innovation, materiality and craft that manages to perfectly harmonize rugged with refined. 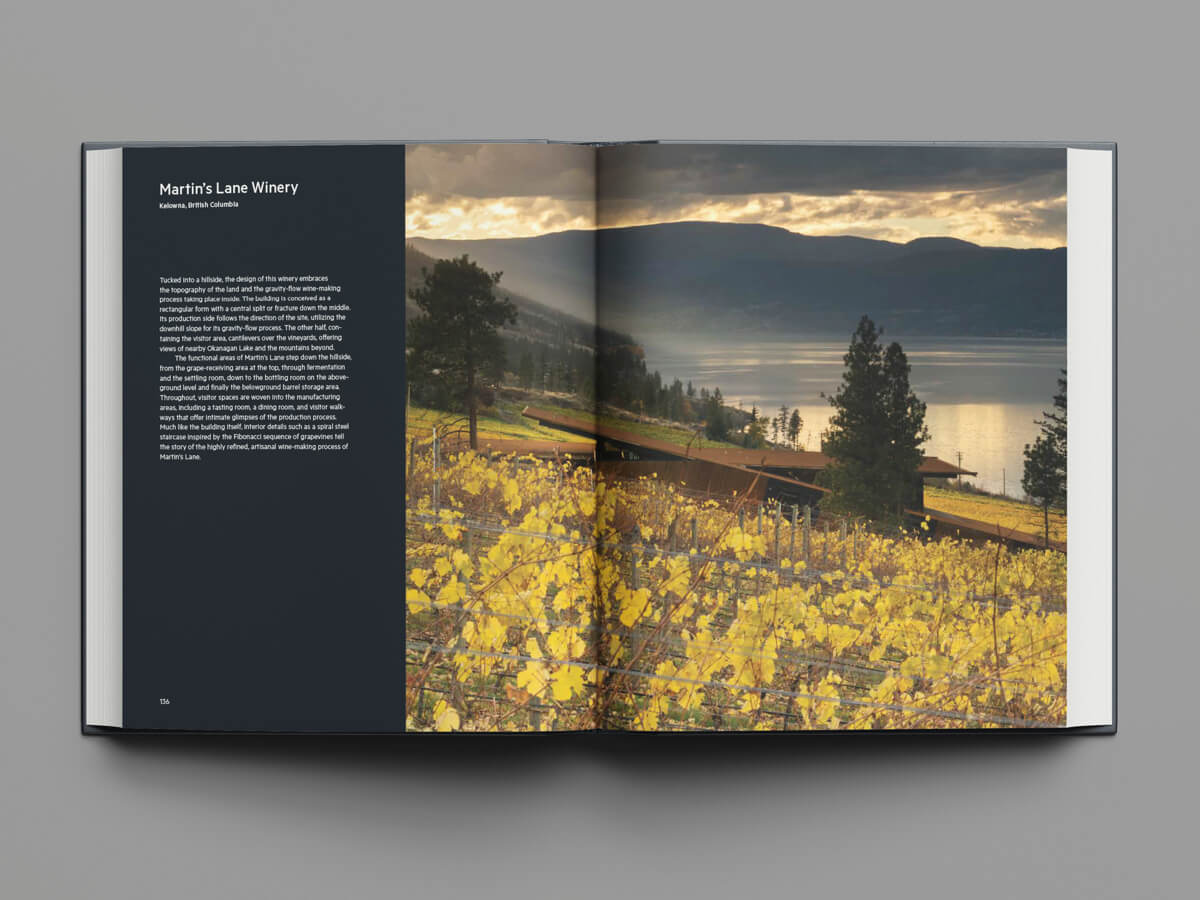 Illustrated with striking full-page photography (and the occasional hand-drawn sketch), the monograph — his fourth with Princeton Architectural Press — is also the perfect escape from current reality, if only for a few hours. —Kendra Jackson

6
The Elements of a Home by Amy Azzarito 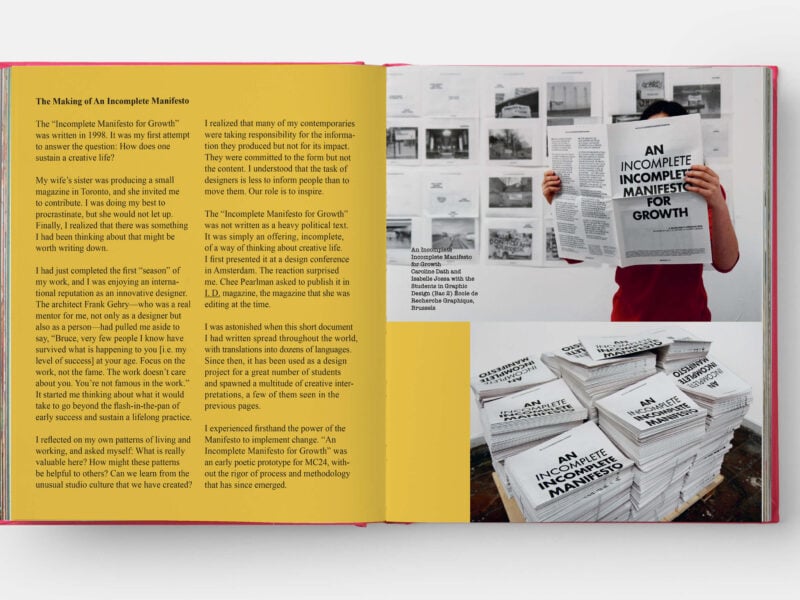 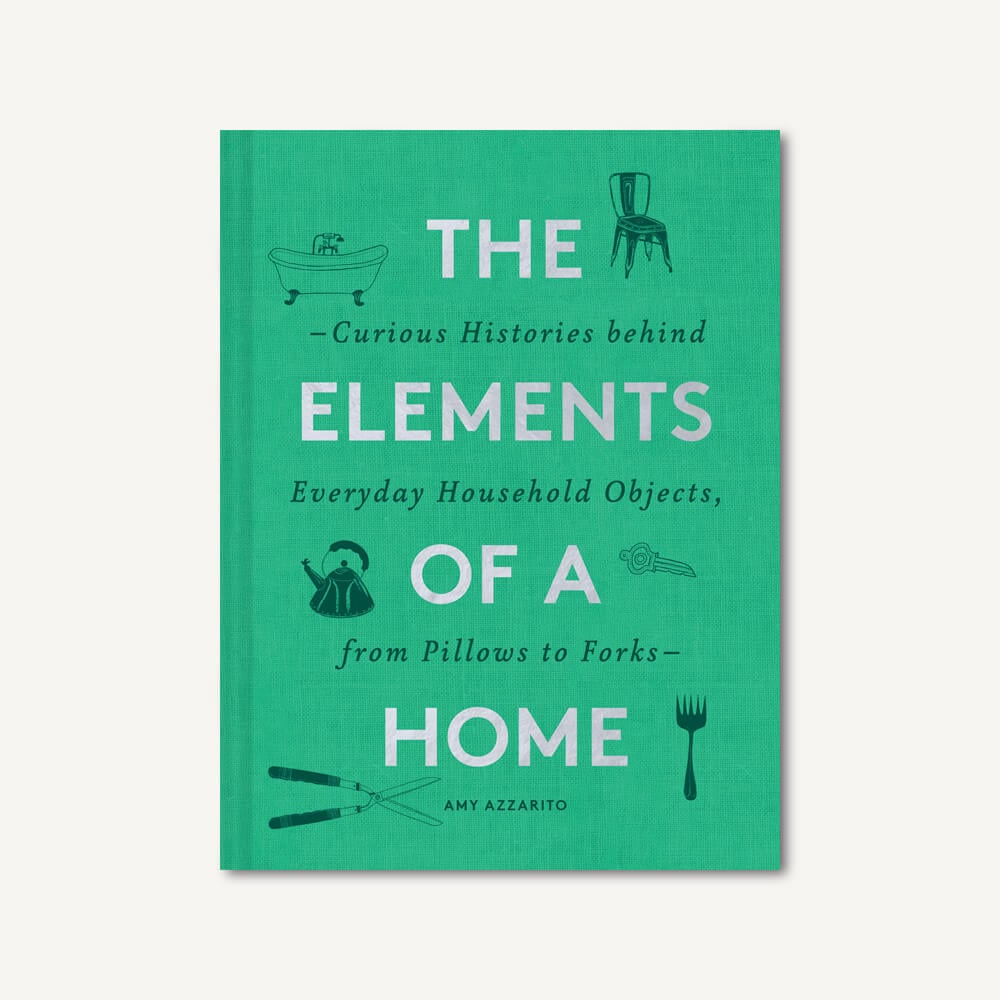 Ever wonder why Michael Graves capped the spout of his iconic Alessi teakettle with a little bird? Or what people used as alarm clocks before, well, alarm clocks? If so, design historian Azzarito’s compendium of intriguing origin stories behind more than five dozen household objects and furnishings, “from pillows to forks,” is for you. Covering every room of the house and a wide range of sources, Elements of a Home can be as irreverent as it is informative, the wealth of facts delivered in an often cheeky tone. Each entry is also graced by Alice Pattullo’s gorgeous drawings, augmenting the fun.

Incidentally, Graves’s whistling birdies were meant to evoke the crowing of roosters at dawn, while the earliest alarm clocks involved a system of rocks and water, devised by none other than Plato. Now you know. —Danny Sinopoli 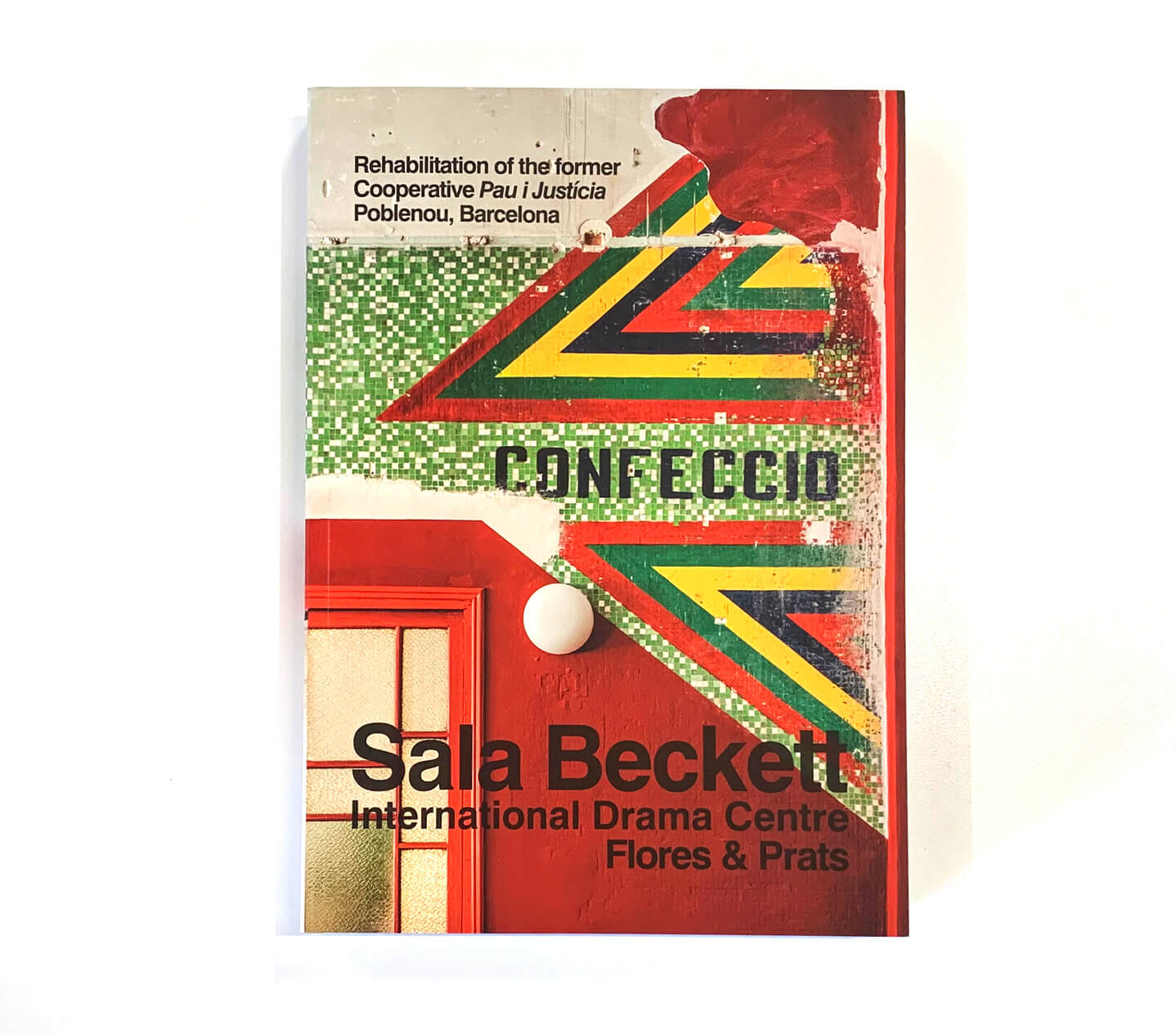 Flores & Prats’ Sala Beckett theatre in Barcelona is a gorgeous case study in adaptive re-use. The architects won a competition to design a new home for the international drama centre and, with it, the permission to tear down the existing building (a former workers’ co-op now dilapidated and abandoned) on the chosen site. They decided to both retain the structure and preserve it, to graft onto it a new life while highlighting its former one. You can’t argue with the results.

This book presents before and after photographs, architectural plans, drawings of sections and studies of tilework, windows and doors – not since Rem Koolhaas curated the Venice Biennale has so much loving attention been paid to the building elements that bring character to a space. It reminds the reader that the details are what give a building its soul. In the case of Sala Beckett, Flores & Prats have made that soul live on inside a beautifully crafted new home. —Elizabeth Pagliacolo 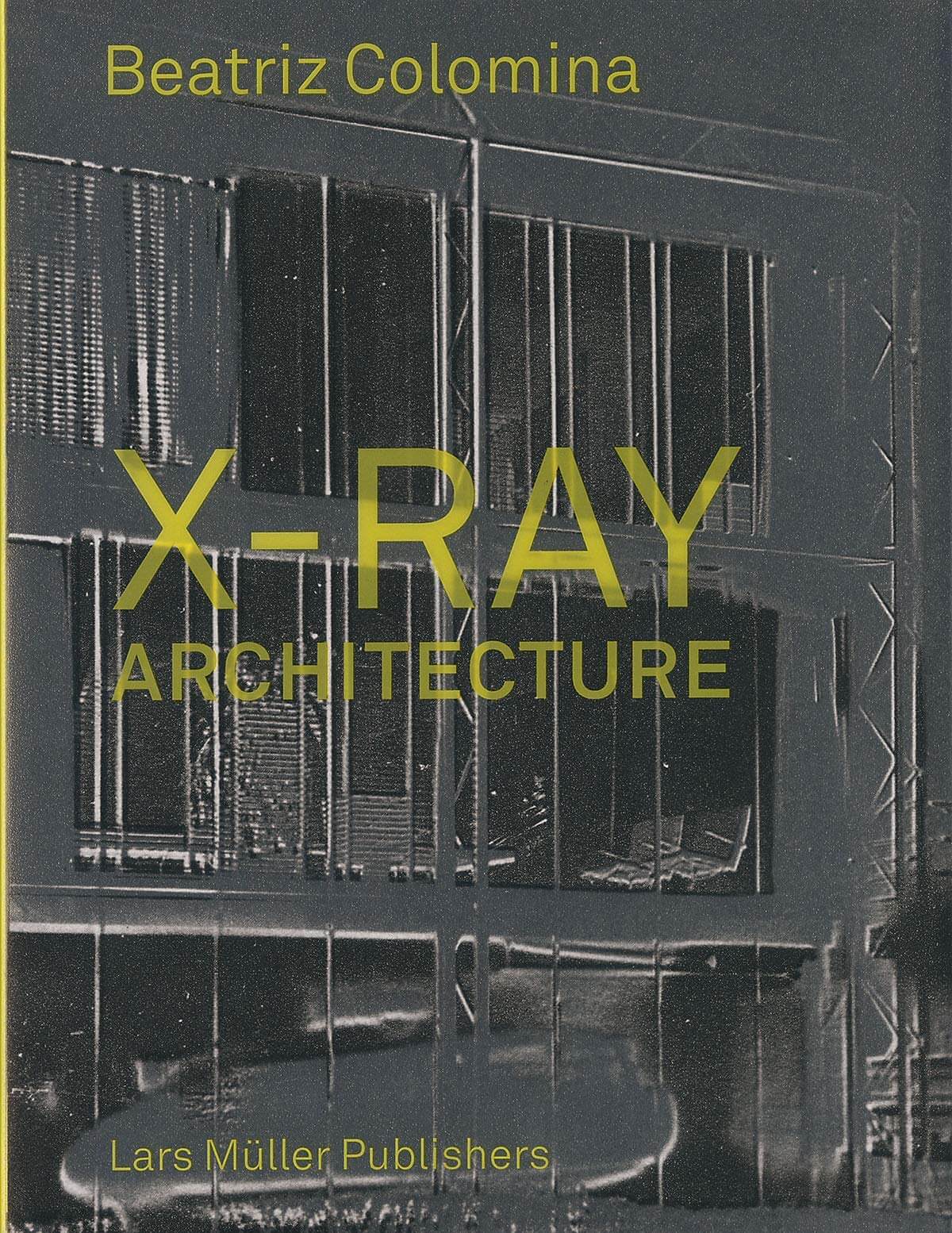 What would the history of modern architecture look like if, ignoring touted “masters” and established canons, you approached it instead from the perspective of something microscopic, almost imperceivable? Taking inspiration from Susan Sontag’s Illness as Metaphor, architecture historian and theorist Beatriz Colomina’s latest tour de force for Lars Müller Publishers traces her decades-long fascination with how disease and its devices have fundamentally shaped the built environment. 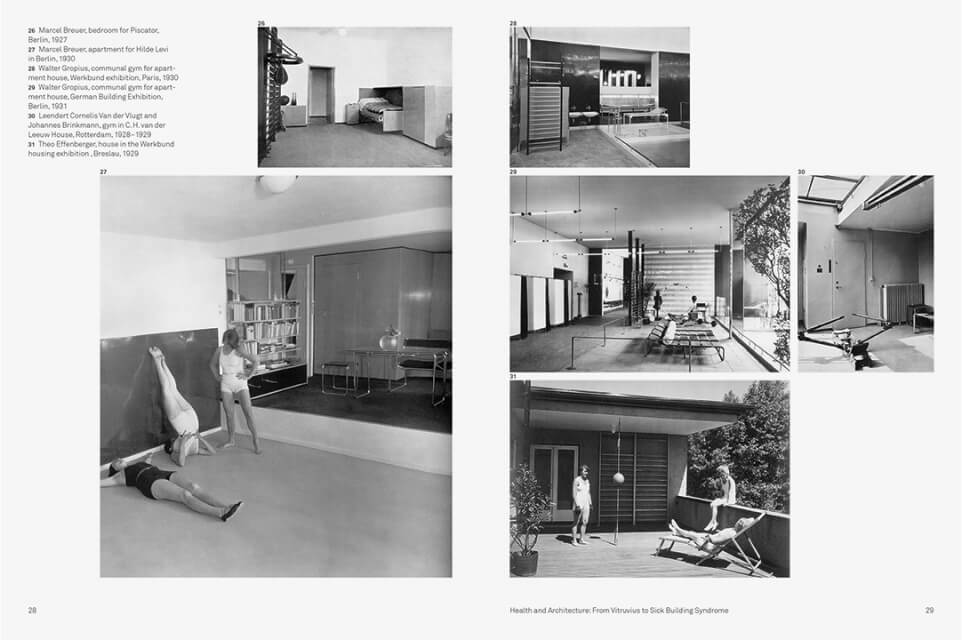 From pseudo-health guru Dr. Philip Lovell and his influence on Richard Neutra’s expansive, luminous residences to the ramifications of tuberculosis and medical imaging (most prominently the X-Ray) on seminal figures like Alvar Aalto and Mies Van der Rohe, it’s a masterful reframing of modernism’s “clean” lines fit for a time when a virus is quite literally re-making the world. —Evan Pavka

Though the warmer months may be waning, that’s no excuse not to indulge in the latest designer tomes — here are our top picks.