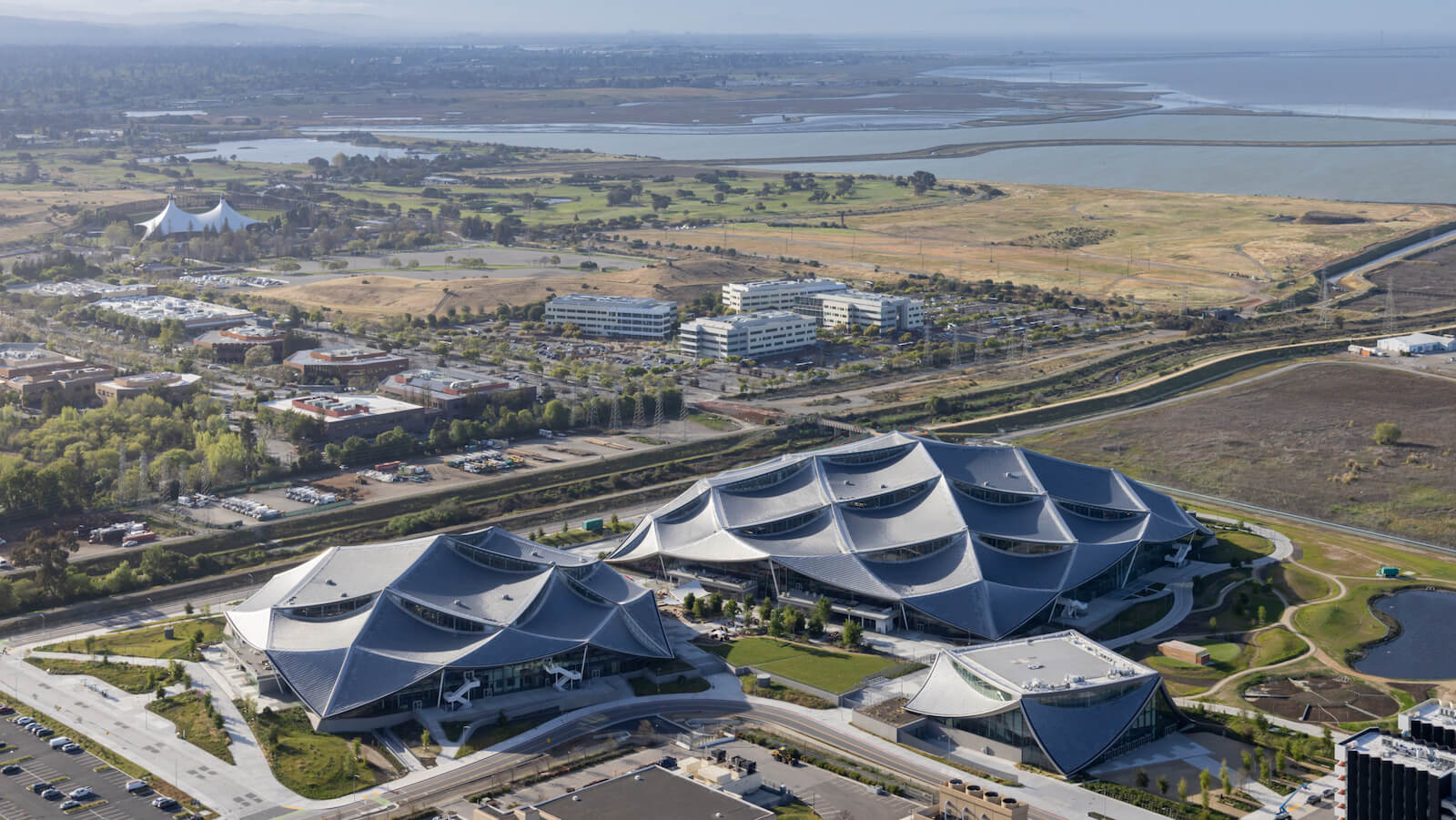 Google promises its first-ever ground-up campus, by Bjarke Ingels Group and Thomas Heatherwick, will operate on carbon-free energy by 2030.

It seemed a folly at first. When originally presented in 2015, the renderings of Google Bay View displayed modular architecture at its most futuristic; its tensile roof system, meanwhile, was both forward-thinking and retro (many saw it as an ode to the celebrated German architect Frei Otto). Now that it’s complete, Google Bay View, adjacent to the NASA Ames Research Center in Silicon Valley, feels as rational as it once seemed far-fetched. 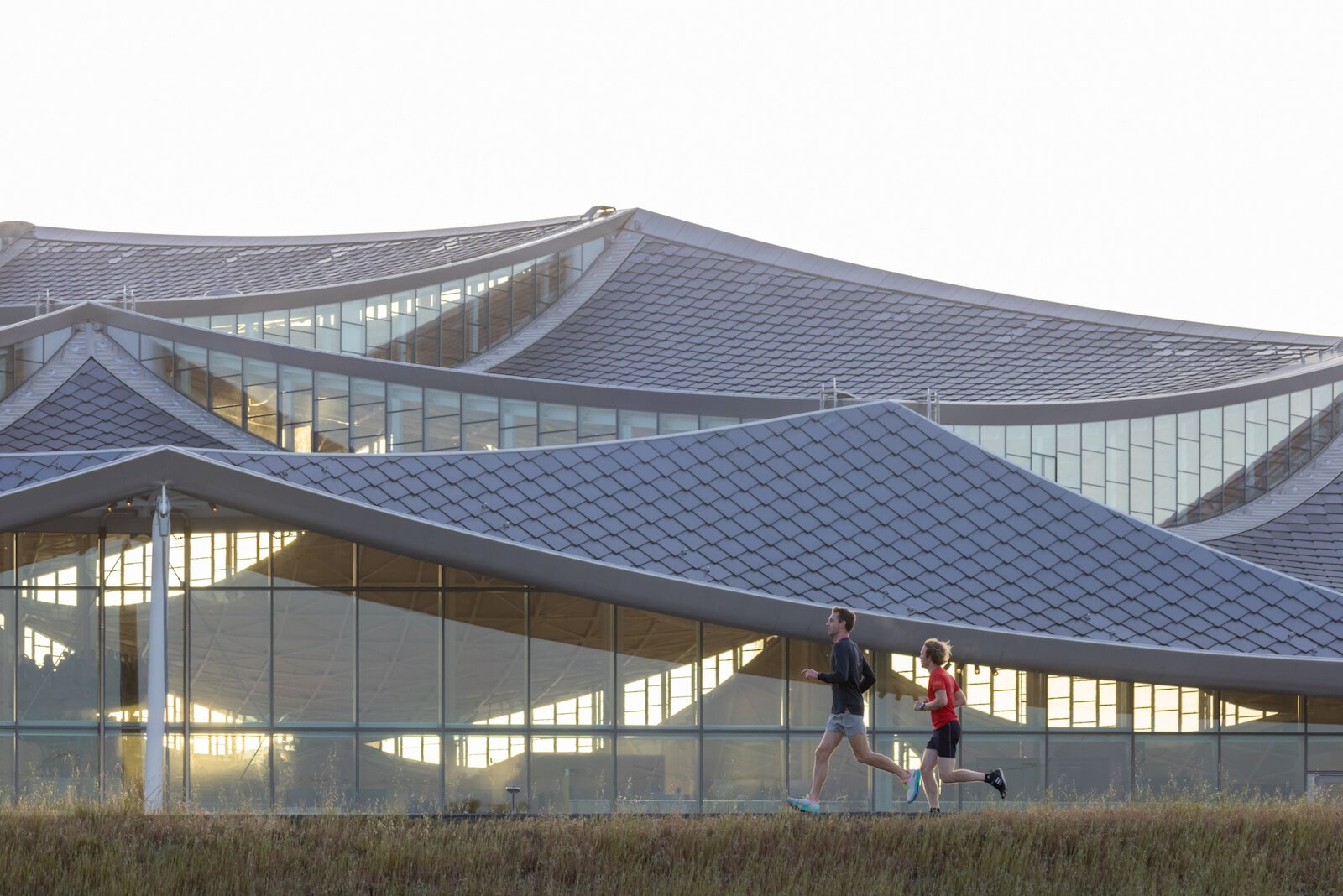 At first glance, the campus — a trio of buildings on a 17-hectare-site that include “short-term employee accommodation units” — evokes that uncanny rendering-to-reality dissonance. While the first visuals that were released awed with their almost gossamer-light tent structure, the end result is decidedly, and perhaps expectedly, much heavier in appearance. The architects, Bjarke Ingels Group (BIG) in collaboration with Heatherwick Studio, opted for an assembly of “dragon scale solar canopies” that, as Ingels says, “harvest every photon that hits the buildings.” 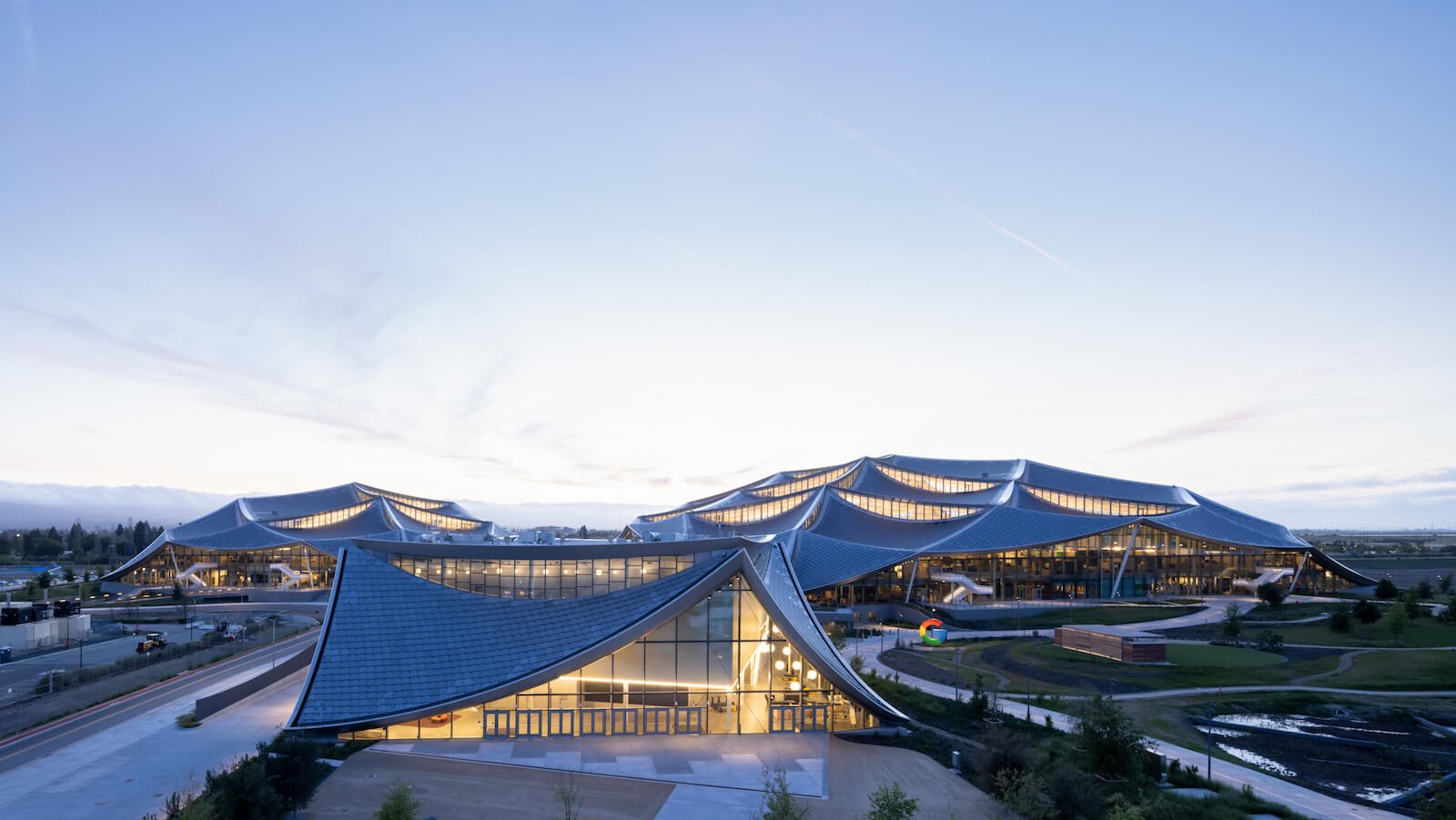 Fitted with 50,000 silver solar panels that generate a total of nearly seven megawatts of energy, and incorporating clerestory windows that allow sunlight to penetrate to the workspaces below, this roof system is just one facet of the overall eco-strategy that allows the building to run exclusively on electric energy. In fact, BIG and Heatherwick Studio believe the campus, which boasts “the largest geothermal pile system in North America,” will be fully carbon-neutral by 2030. “The energy piles store and extract heating and cooling from the ground, and even the naturally beautiful floras are in fact hardworking rootzone gardens that filter and clean the water from the buildings,” Ingels explains in the official press release for the project. 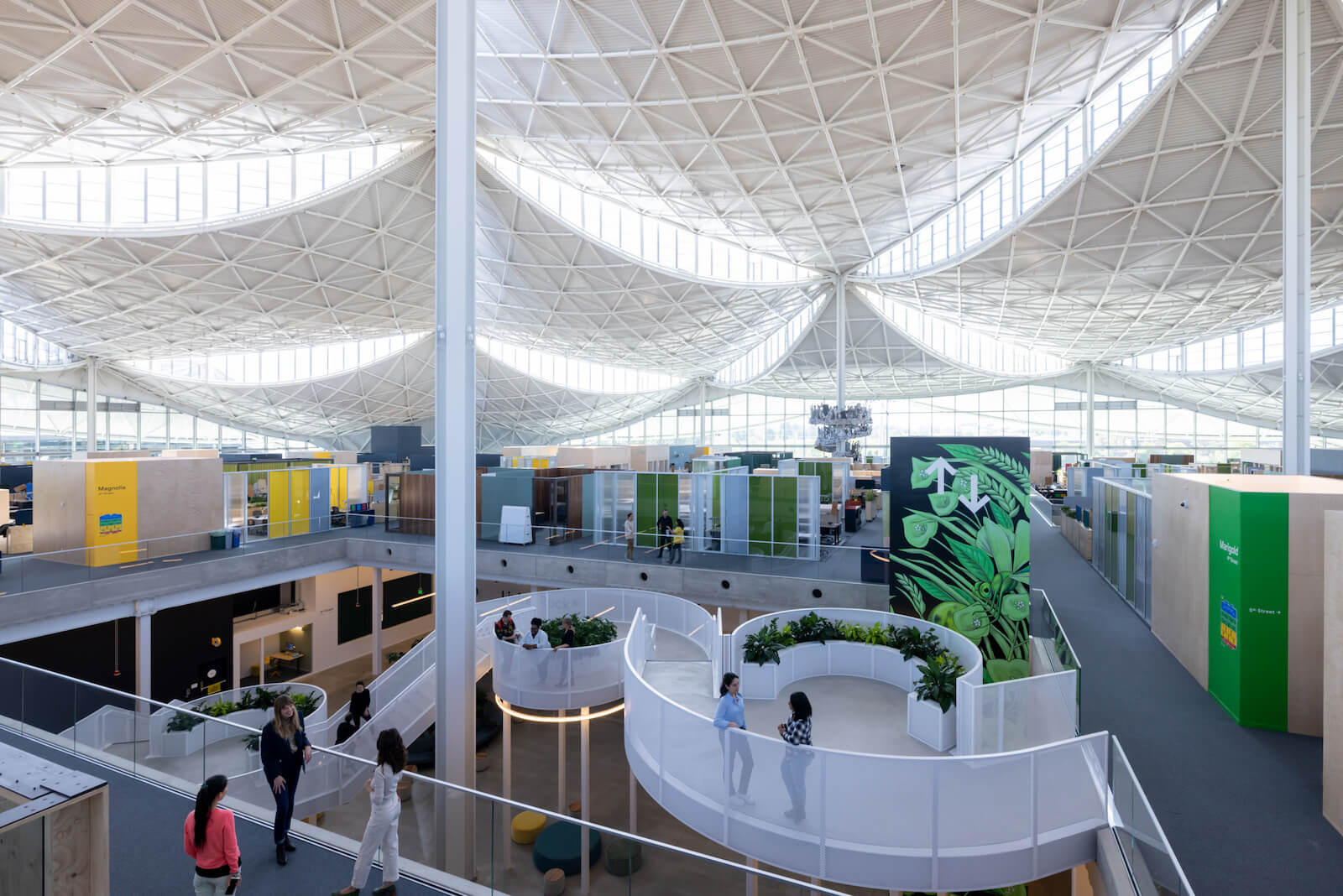 The campus’s geothermal system is expected to create a carbon emissions reduction of nearly 50 per cent and uses only 10 per cent of the water that would have otherwise been for cooling. To further connect the Google Bay View Campus’s sustainability ethos to the surrounding environment, Google has innovated technologies to “collect, treat, and reuse all stormwater and wastewater and provide habitat restoration, sea-level rise protection, and access to the beauty of natural wetlands for both Googlers and the public on the nearby Bay Trail.” Surrounding the campus are seven hectares of “high-value natural areas” that include wet meadows, woodlands and marsh aimed at reviving “missing essential habitats in the Bay Area.” 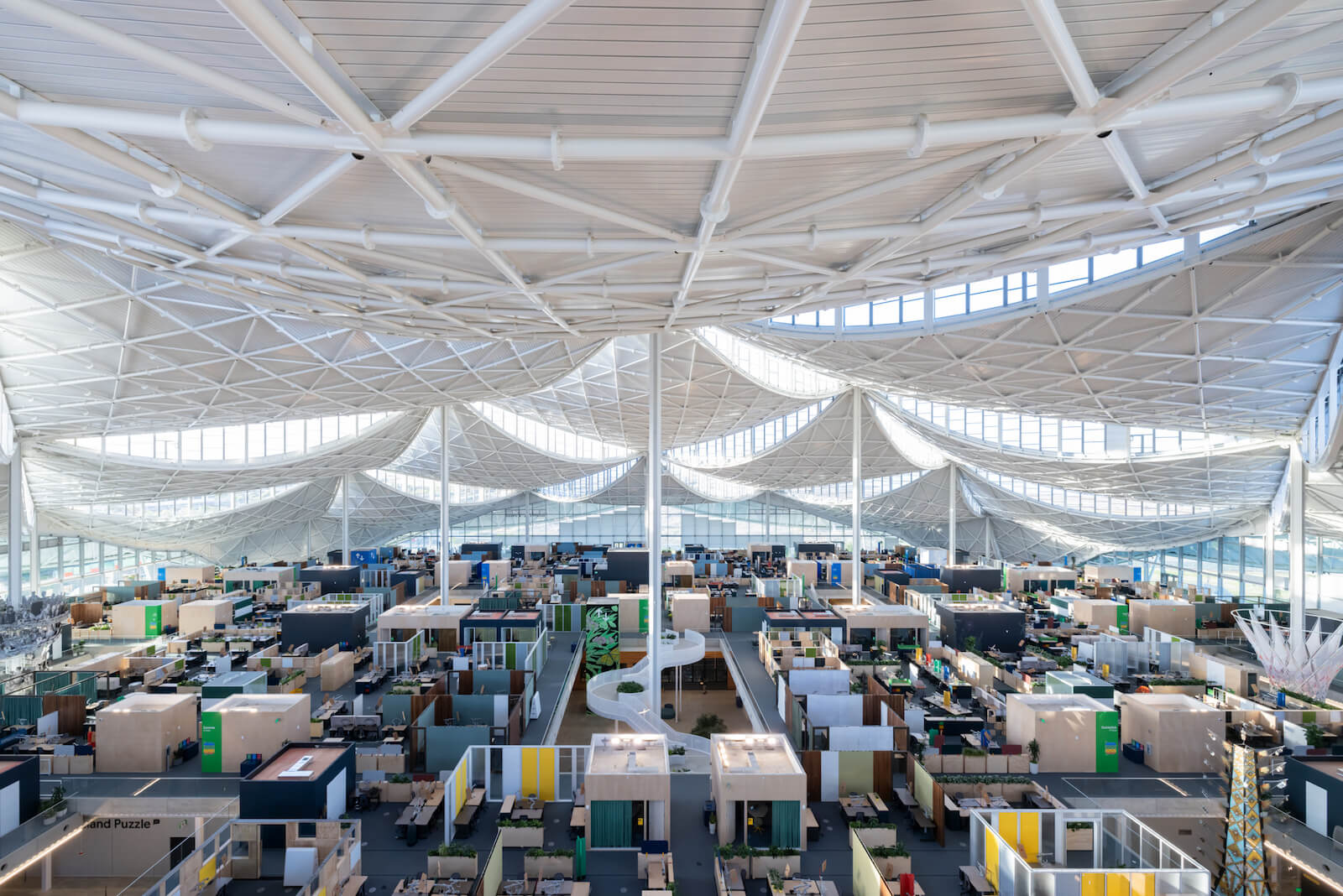 It might be that “Googlers” are the ones who will most directly benefit from this vision: The project will be the new digs for 4,000 employees of the tech giant’s advertising arm. In a pandemic era, when connection to the outdoors is more important than ever and office workers are considering their options, BIG and Heatherwick’s plan is even more prescient than it first seemed. The workspaces, in the two office buildings (the third is a 1,000-person event centre) are arranged on the second floor of two levels and positioned directly under the canopy. This makes them optimized for interior daylight and collaboration.

The lower floor, meanwhile, features a range of amenity spaces: Breaking up the floorplan are a series of integrated courtyards — featuring kitchenettes, cafes and meeting hubs — that provide employees with easy access to leisure activities in spaces featuring plenty of plants and nature-trail-like diversions. At a time when many companies in various sectors are presenting manifestos on how to entice the employee back to the office, Google and its architects seem to have built the real thing. Time will tell.

Google promises its first-ever ground-up campus, by Bjarke Ingels Group and Thomas Heatherwick, will operate on carbon-free energy by 2030.