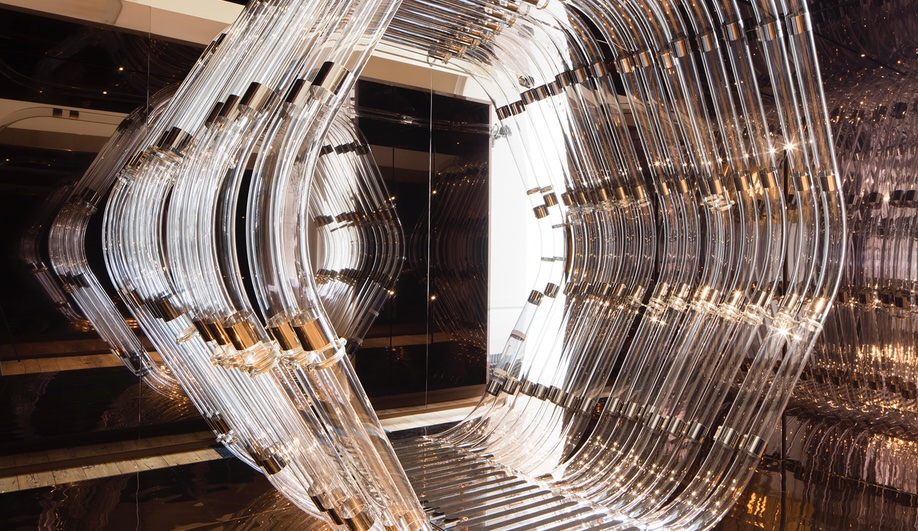 In formatting its first design biennale – on until September 27 – London’s team took its cues from the successful architecture event in Venice, including the pronunciation of “biennale” itself, which can sound silly when you’re announcing your whereabouts to friends and colleagues.

Yet the entrants, from 37 countries on six continents, took very seriously indeed the theme of “utopia,” inspired by Thomas More’s 500-year-old classic novel. And the experience of getting to all their presentations – scattered around the entirety of Somerset House, a sprawling manor at the city’s dead centre – was a sobering one.

Pushing the role of design to address and change alternate futures was the ultimate challenge, and interpretations were all over the map – a blessing for a country that’s taken steps, recently, to become more homogenous. Some even managed to look at once viable and beautiful, which was, let’s face it, an unwritten directive.

While some countries took a practical position (the United Arab Emirates proposed contemporary cooling and irrigation systems for its ancient waterways), others were theoretical, conceptual, even complacent (Lebanon recreated an entire Beirut bazaar with traditionally social barbers, communal noshing and shisha circles). Turkey entered a “wish machine” (pictured above) designed by the successful practice Autoban, with a giant, spiralling pneumatic tube that sucks up written requests and sends them spinning around the room.

Herewith, the highlights from the London Design Biennale: 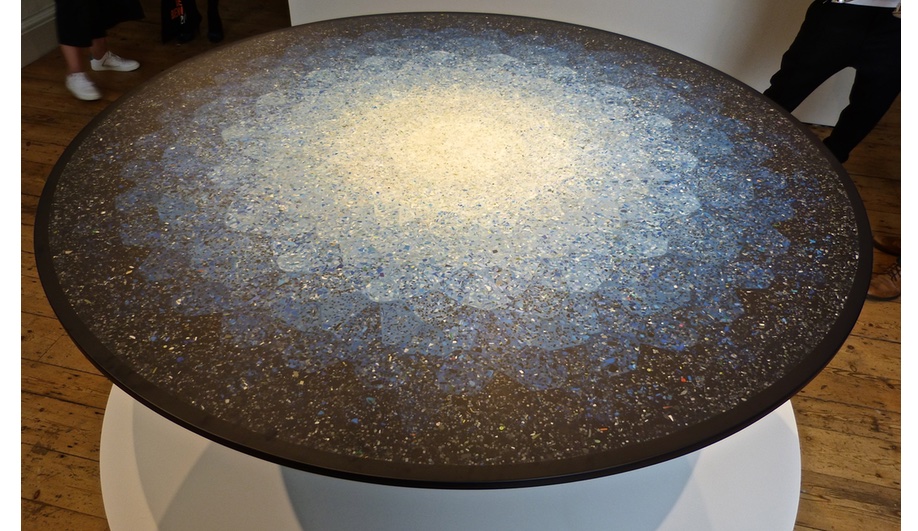 1 Australia: “Plastic Effects” by Brodie Neill
As a boy, Brodie Neill frequented the beach towns of remote Tasmania where there were no paved roads and no electricity but – as he learned returning a year ago – heaps of plastic litter washed up on shore. To address this current dystopia, in which pristine settings are ruined by foreign garbage, Neill “began looking at plastic as a commodity.” He collected rubbish from around the world, separated it, cleaned it and invented a durable aggregate that combines 70 per cent plastic with binding resin.

With 24 shades to play with, from black through blue to white, he designed a series of tiles and pieced them into a digitally designed terrazzo kaleidoscope that he sanded down to resemble parquetry. His Gyro Map table, depicting the Earth’s longitudinal and latitudinal lines, is both shockingly handsome and beautifully viable. “Your traditional aggregate materials are dragged from the core of the earth at great expense,” Neill told me. Meanwhile, “there’s plastic out there for free, and collecting it keeps it away from fish, out of the food chain.” 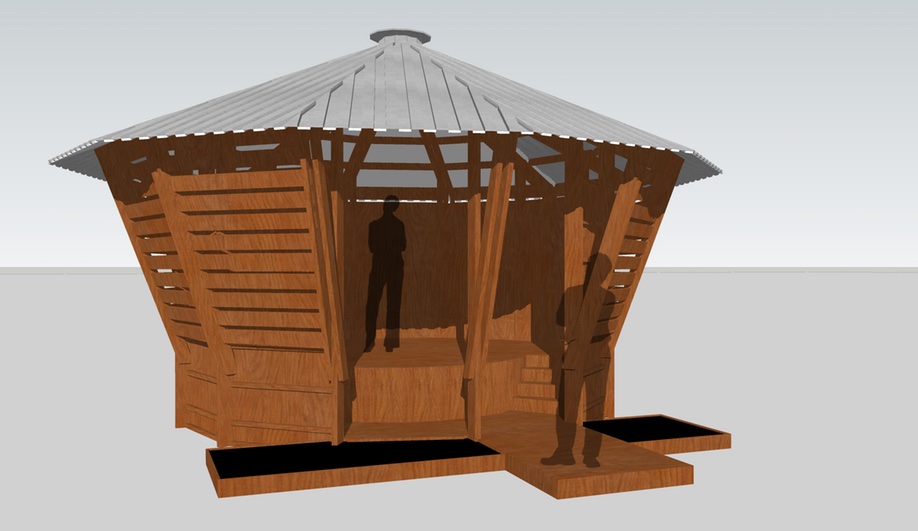 2 Nigeria: “Ulo” by Gozi Ochonogor, Shola Orekoya and Folakunle Oshun
In the tension between the Niger Delta and its mammoth oil industry, there’s a clear loser. So what will become of Africa’s largest wetland in the face of oil spills, gas flaring and rising water levels? Nigeria’s team designed a contemporary take on a traditional wood hut using a processed form of water hyacinth, an invasive delta weed, and raised on stilts over oil troughs. To light it, they’ve designed lamps with recycled petroleum products and raincoats to ward off flash flooding. The suggestion is that the region’s wholesale destruction can be tempered by thoughtful design so that indigenous and corporate populations can coexist. 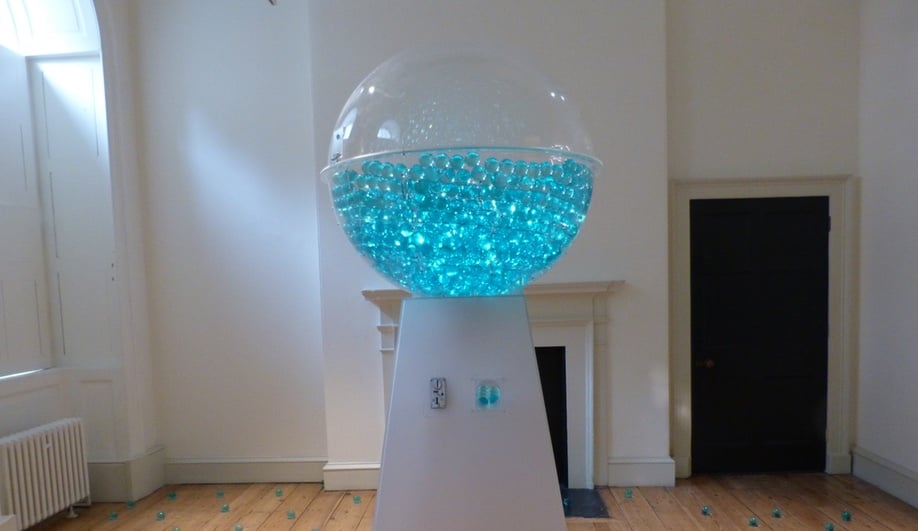 3 Saudi Arabia: “Water Machine” by Basma and Noura Bouzo
A universal symbol of innocence: the gumball machine. But take the silhouette out of context and fill it with a dwindling commodity – fresh water – and you get a sounding board for Saudis’ tendency to take water for granted. The Saudi sisters Basma and Noura Bouzo had hundreds of tennis ball-sized acrylic spheres manufactured and injected with water, then sealed inside a giant decorative globe (though many of the orbs were kept aside as parting gifts for visitors). A soundtrack of dripping water pervades the space.

“People don’t think about where their water comes from,” says Noura. “They treat it like candy…. An ideal society can exist only if we can subordinate our personal whims and think of society as a whole.” The plastic balls, as wasteful as your average Evian bottle, are no less sustainable than the expensive desalination systems in the Middle East. The solution, say the sisters, is in the design. 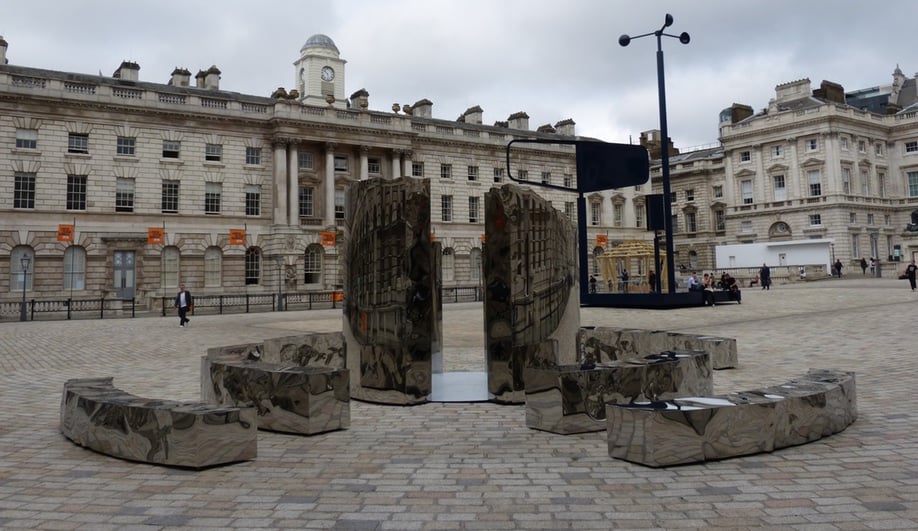 4 Albania: “Bliss” by Helidon Xhixha
What is a “utopia” if not a pleaser of crowds? Helidon Xhixha’s entry for Albania suggests that self-reflection and community are the two elements that make for a happy society amid unprecedented migration and economic uncertainty. And he’s packaged it in a delightful “community” of mirrored steel benches and columns – displayed, Renaissance-style, around a central void representing the utopia.

Together, the democratic arrangement is eminently selfie-friendly while also inviting visitors to look at themselves and their neighbours in a new way. It’s an attractive proposition. Naturally, Xhixha scored a prime spot in the grand courtyard of Somerset House, and it’s one of the first things you notice. 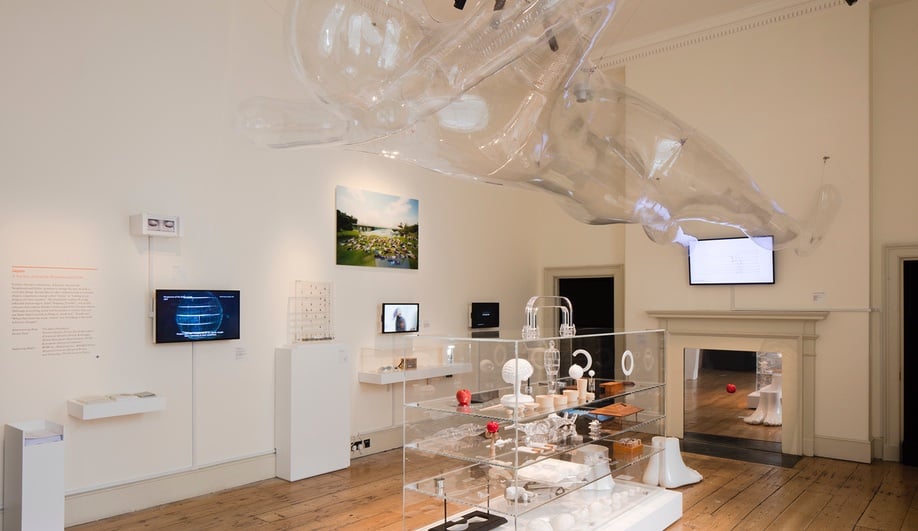 5 Japan: “A Journey Around the Neighbourhood Globe” by Yasuhiro Suzuki
An absurdist title for an absurdist entry, but nonetheless one that demands a look in. Yasuhiro Suzuki’s all-white room is like a Muji franchise where nothing is quite right: a cabinet of downright curiosities, like plastic tree stumps and zip-open globes. It makes sense that Suzuki is not a designer but rather an artist with a surreal bent – while we may see the wares as upside-down, to him they jive with the Japanese sensibility.

Suitcases in display vitrines are literal and figurative, filled with objects that may or may not belong there or even be what they seem. “Horizon pencils” are two-toned to draw earth and sky in a single stroke, and golf balls have craters resembling the moon. Weird aerial photographs and animations demand that you linger and ruminate, as with a Dali artwork.