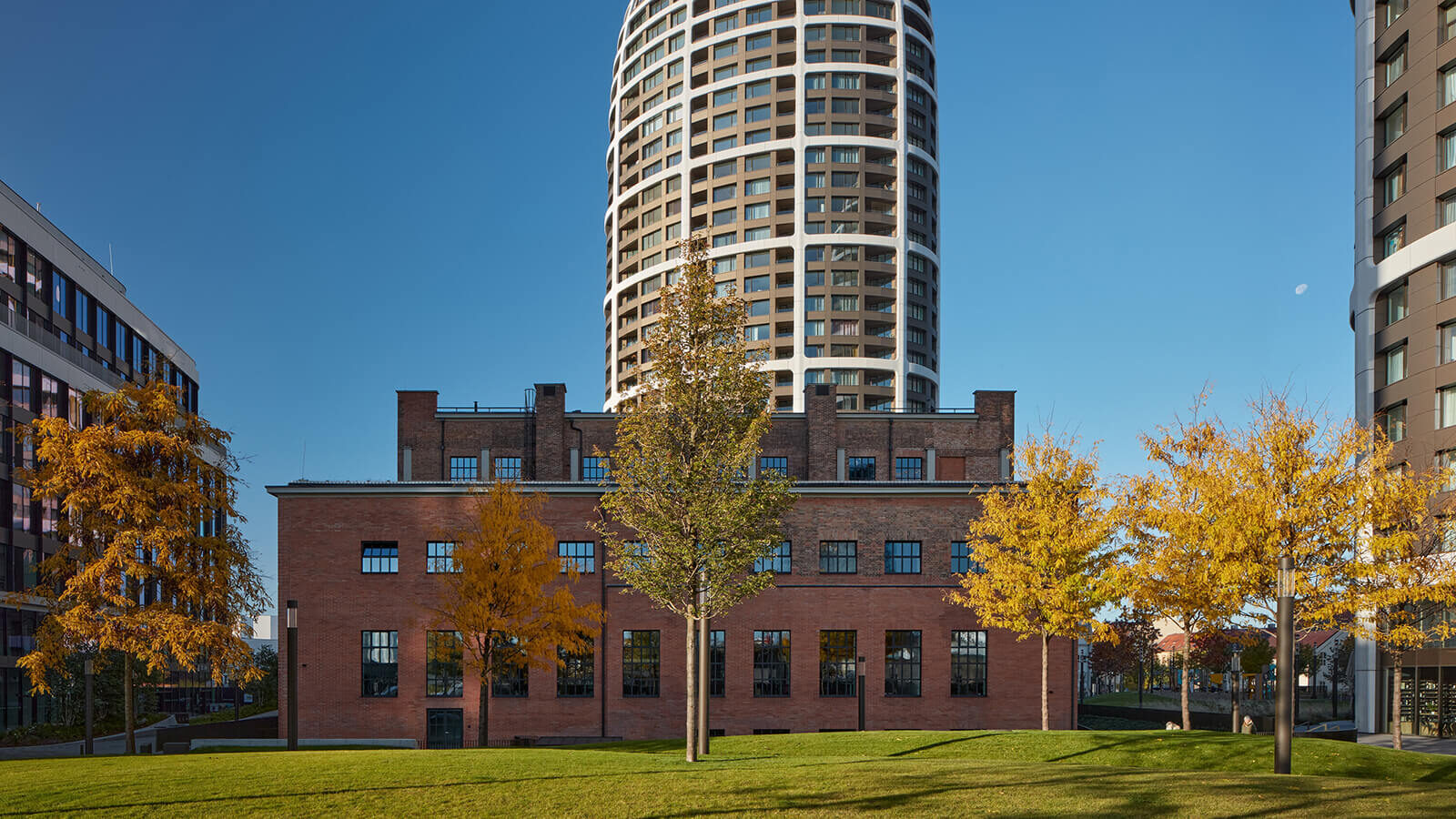 The adaptive re-use project embraces the functionalist building’s industrial past with an almost futuristic sensibility.

When the Bratislava Heating Plant was completed in 1942, the Slovakian capital was in the midst of its industrial heyday. Designed by architect Dusan Jurkovic, the building remains a relic of the functionalist architectural style and was designated a National Cultural Monument in 2008. Following a bomb attack during World War II, the plant (and its neighbouring buildings) sustained significant damage and, despite repairs and additions over the years, eventually fell into disrepair — that is, until recently. 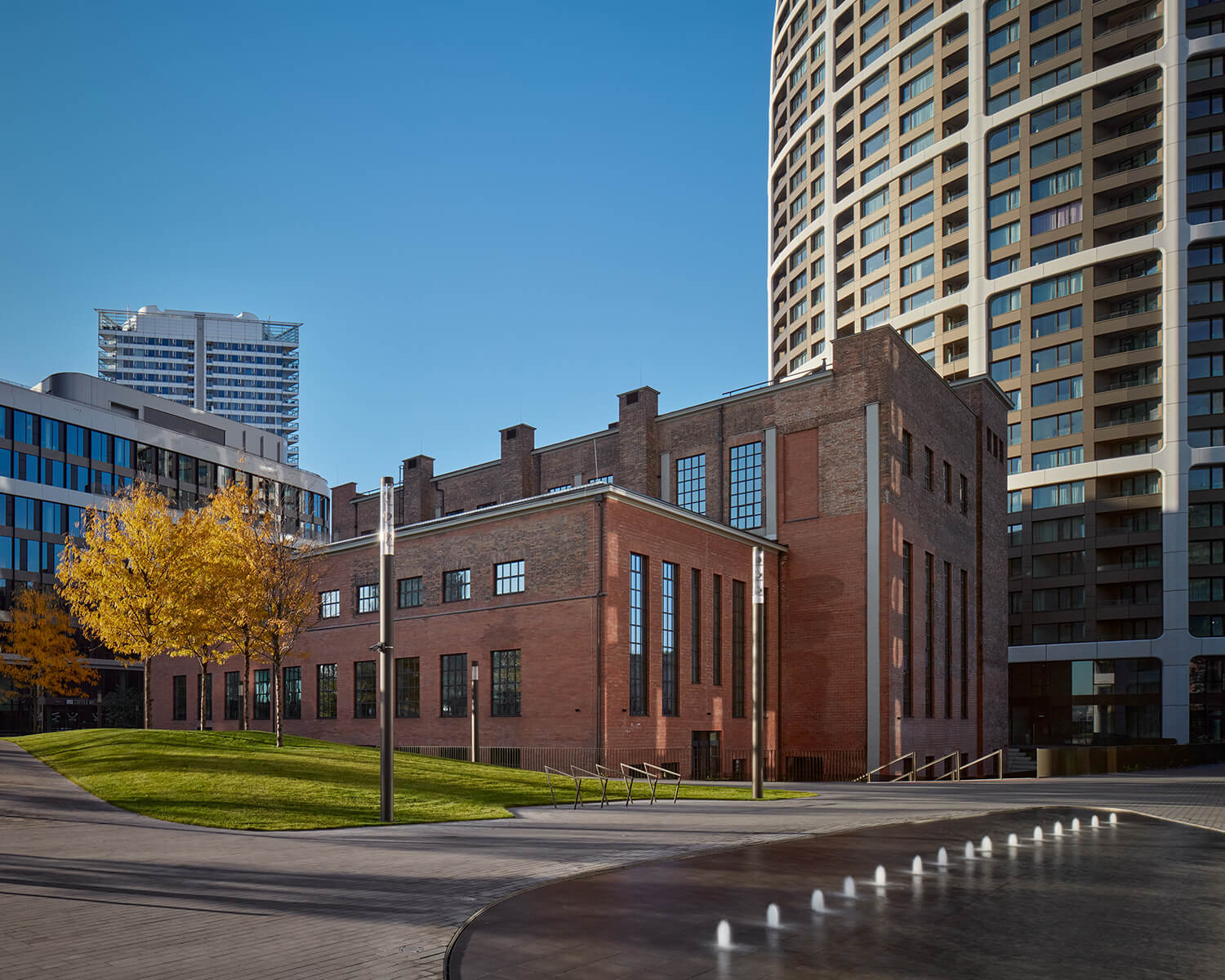 It forms part of a former industrial district on the Danube’s northern bank that has since been revitalized in large part thanks to Sky Park, a major mixed-use project helmed by Zaha Hadid Architects. On the heels of this development, local firms Studio Perspectiv and DF Creative Group have converted the heating plant into a contemporary co-working space that celebrates the building’s industrial roots. 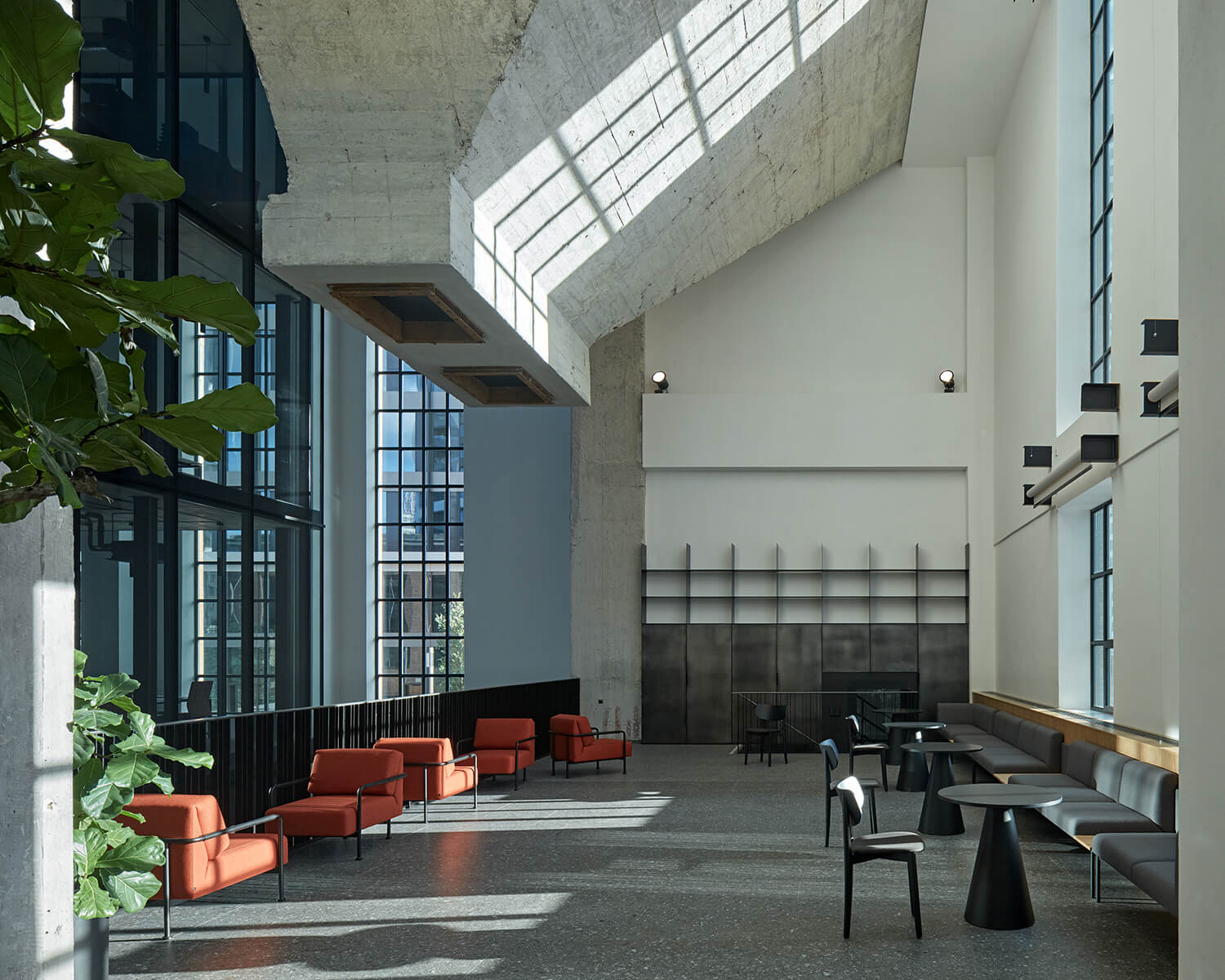 Three years in the making, the renovation marks the second of Base4Work’s flexible co-working spaces — the first is located in Prague. While the first location takes a more traditional approach to workspace design, the newest outpost’s historic locale presented a unique challenge. Rather than simply restoring the original building as designed by Jurkovic, the designers chose instead to reinterpret functionalist architecture for the 21st century. 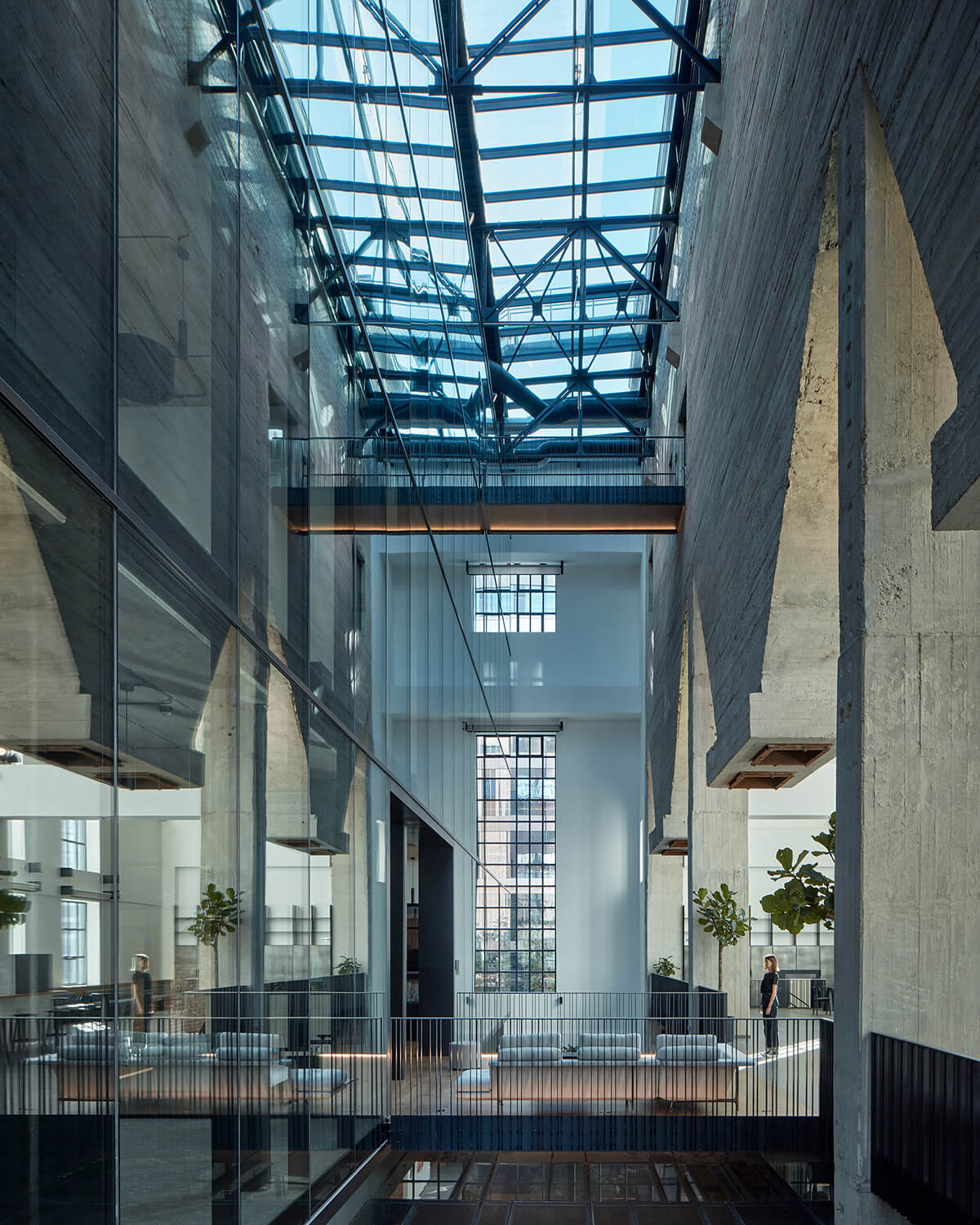 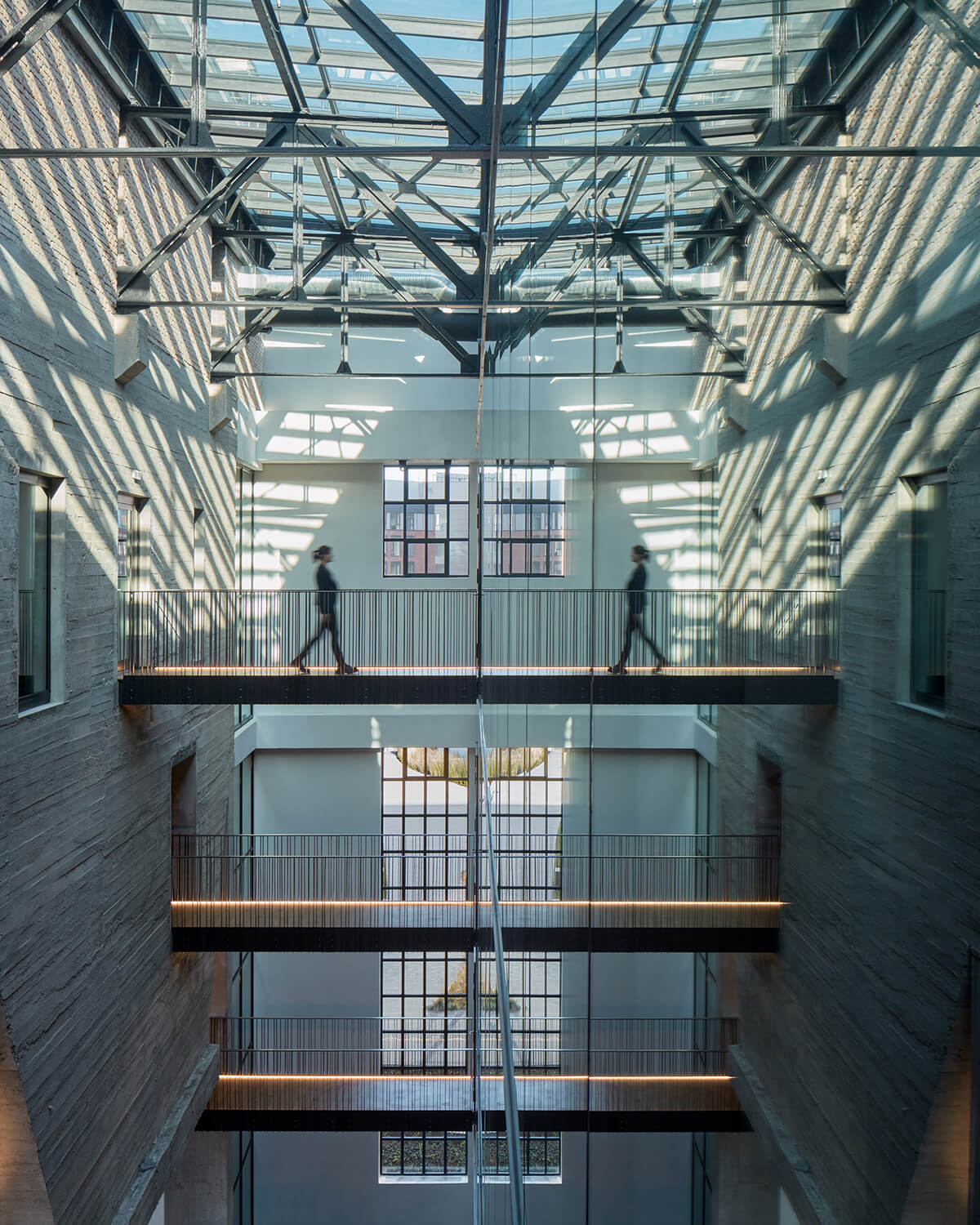 To do so, the firms inserted a five-storey glazed structure into the plant’s former boiler and turbine hall, marking a clear distinction between the old and the new. The result is a space imbued with a remarkable sense of balance. Throughout, interior windows frame views that showcase the inherent contrast between the two structures — and foster fleeting moments of connection between tenants. 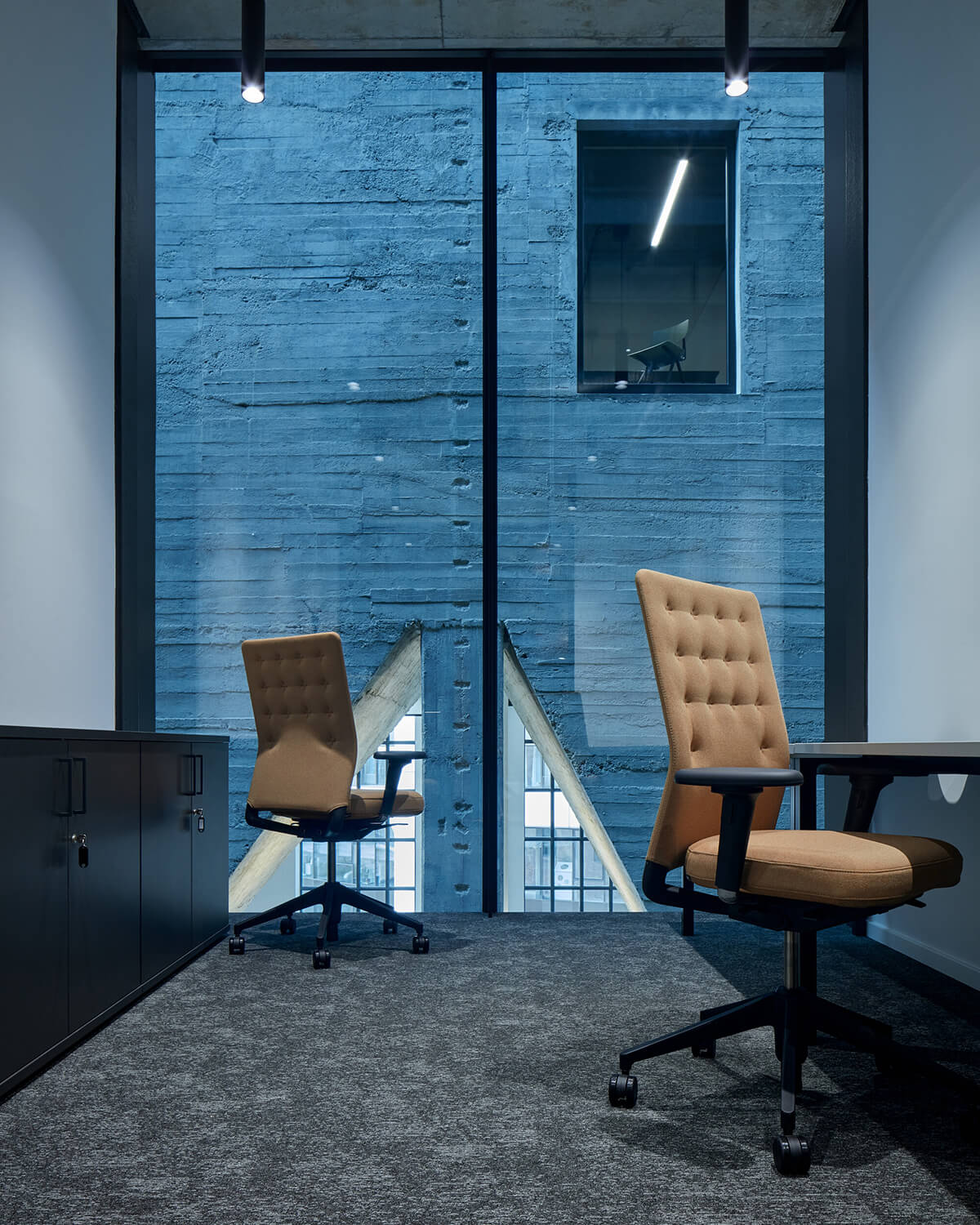 The developer of Base4Work wished to create an environment versatile enough to serve a diverse group of users, whether they be large corporations, start-ups or freelancers. Throughout the 3,900-square-metre space, tenants can choose from a variety of workspaces to suit their needs — from open desks to more private offices, phone booths and meeting rooms. 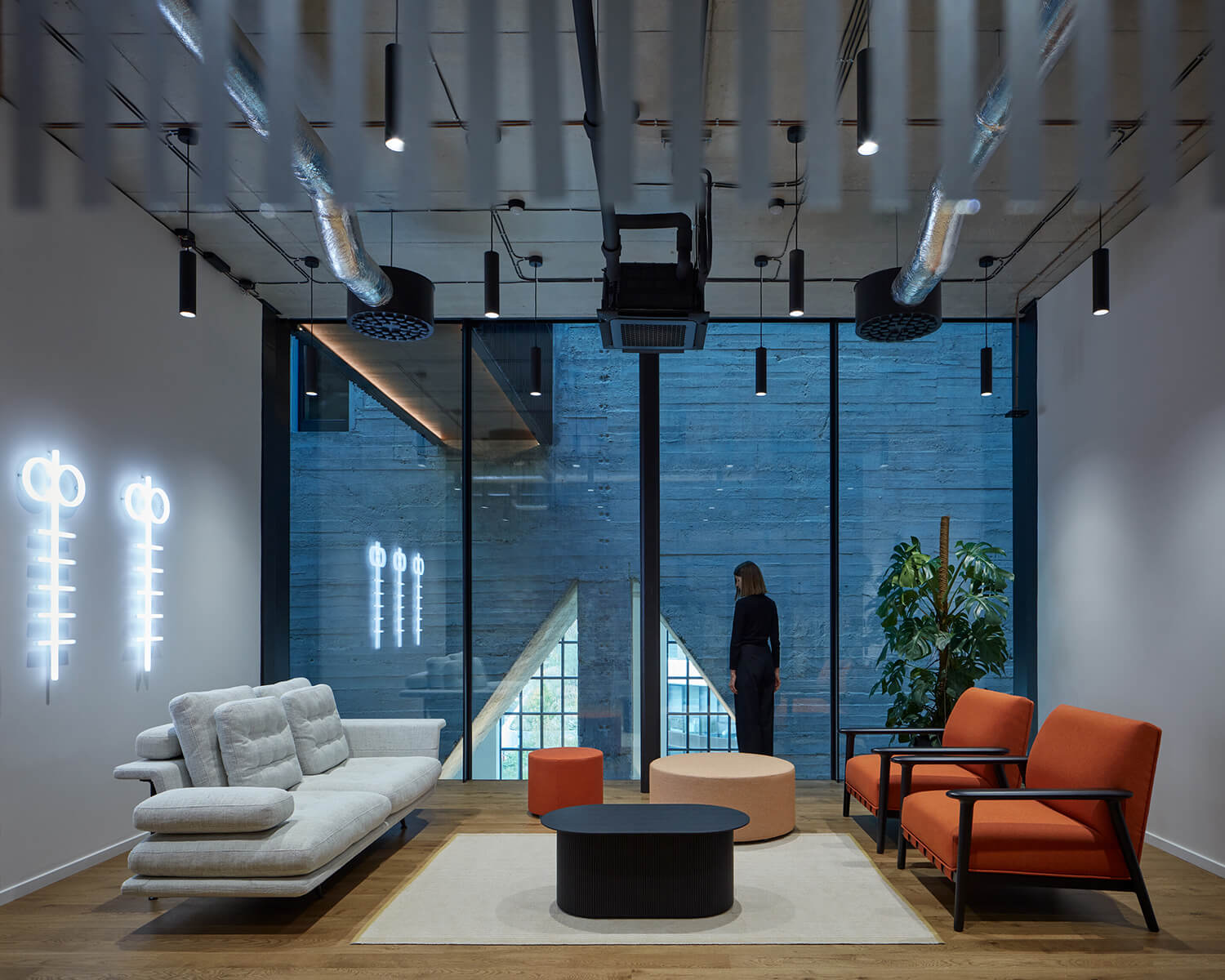 But aside from just a place to work, this type of space offers a sense of connection not afforded by most traditional offices. At Base4Work, extroverts can make themselves at home in one of several community lounges, or the designated meeting and networking zone. A cafe, rooftop bar, event space and art gallery also add to the social scene. 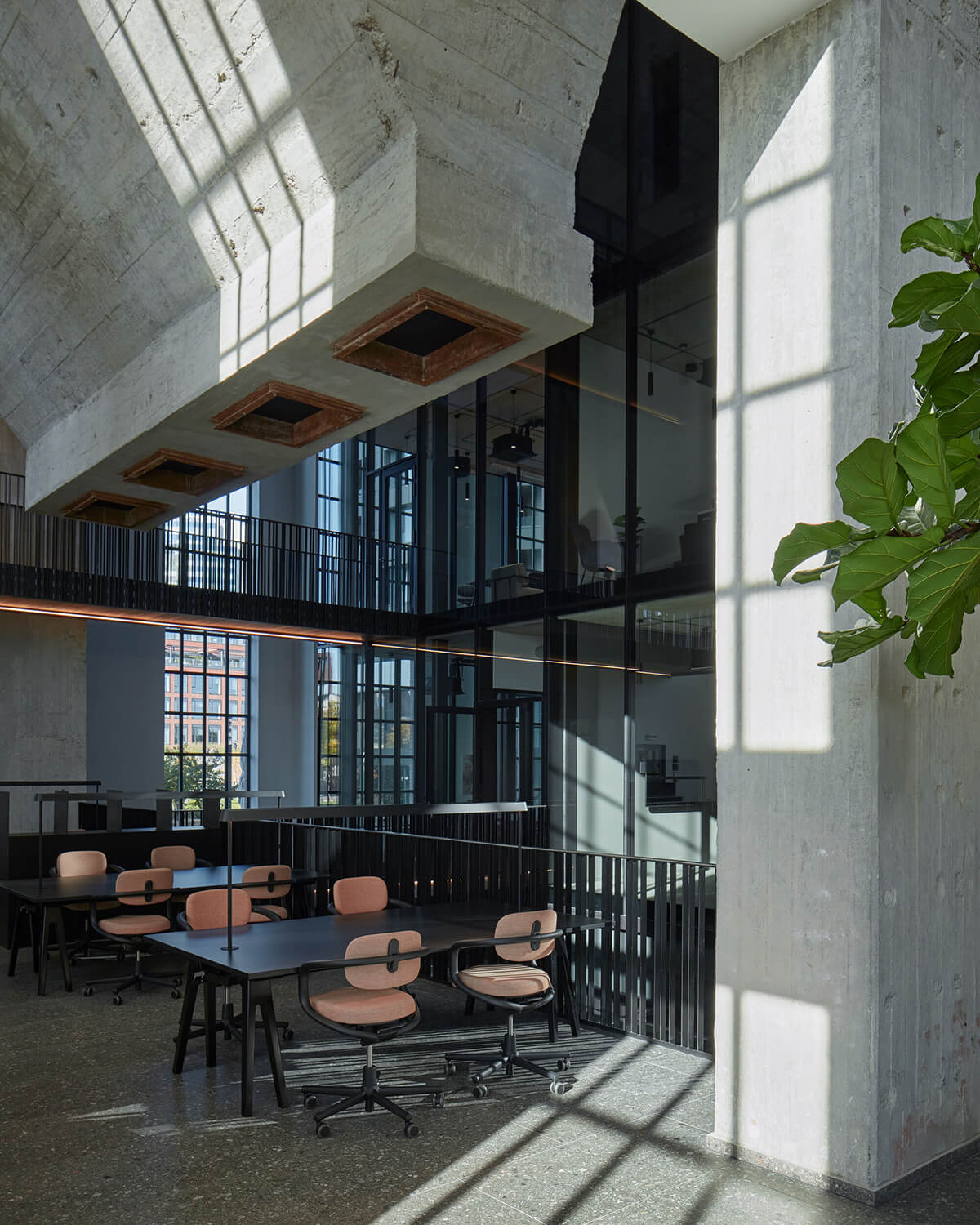 In the atrium, historic elements such as the concrete coal hoppers and crane have been left on full display, preserving the building’s industrial ethos. The hoppers have been resourcefully repurposed as private meeting rooms on the fifth floor. “This is where we took advantage of the location and experimented with glazing in parts of the floor,” explains architect Ján Antal. “The result is an iconic space that everyone wants to see. Even those who are afraid of heights.” 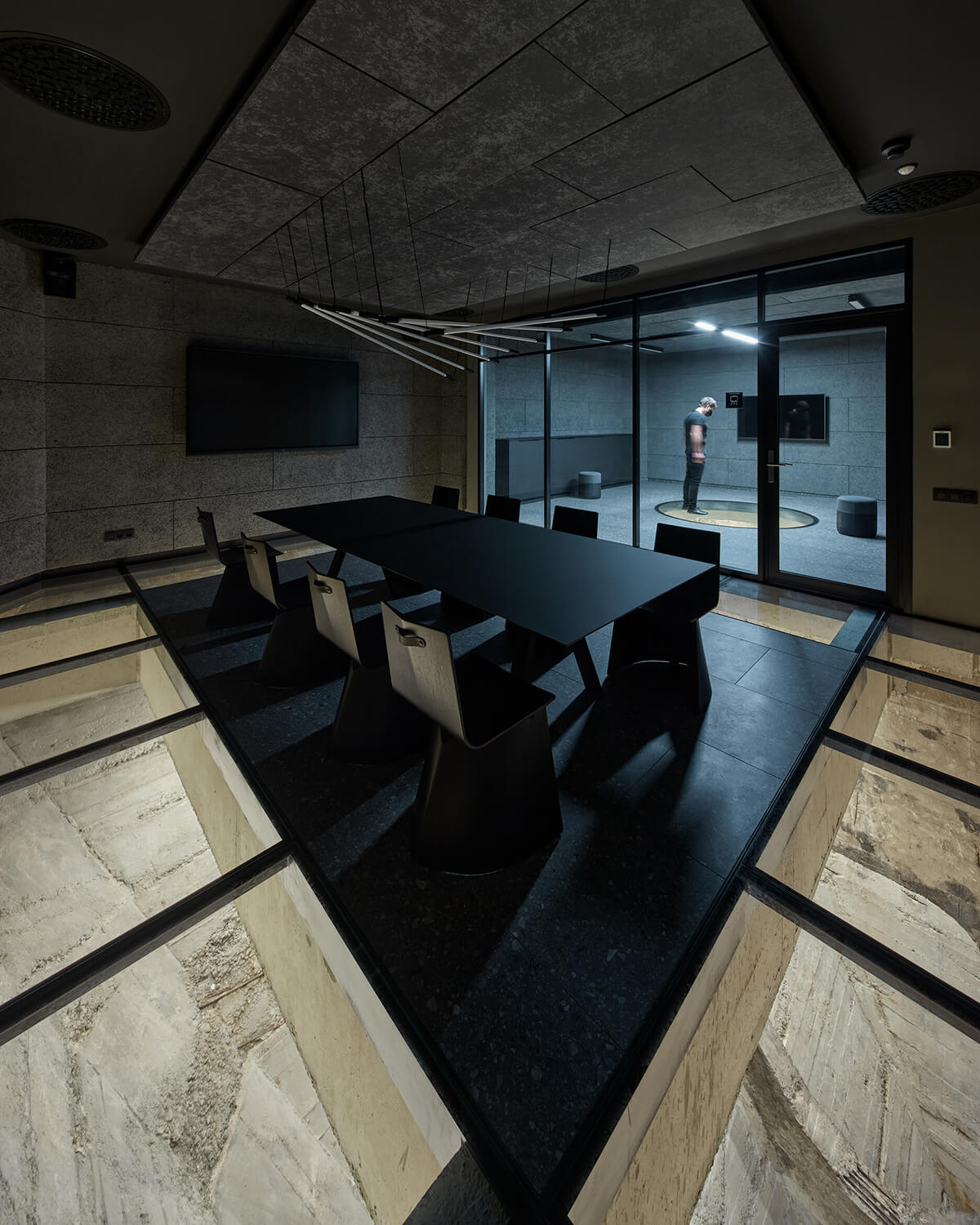 To offset the raw concrete structures that define the interior, Studio Perspectiv introduced softness and emphasized acoustics through the use of wall coverings made from recycled PET bottles. The designers opted for an inviting colour palette of blue, green and terracotta, which nod to the building’s red brick exterior. 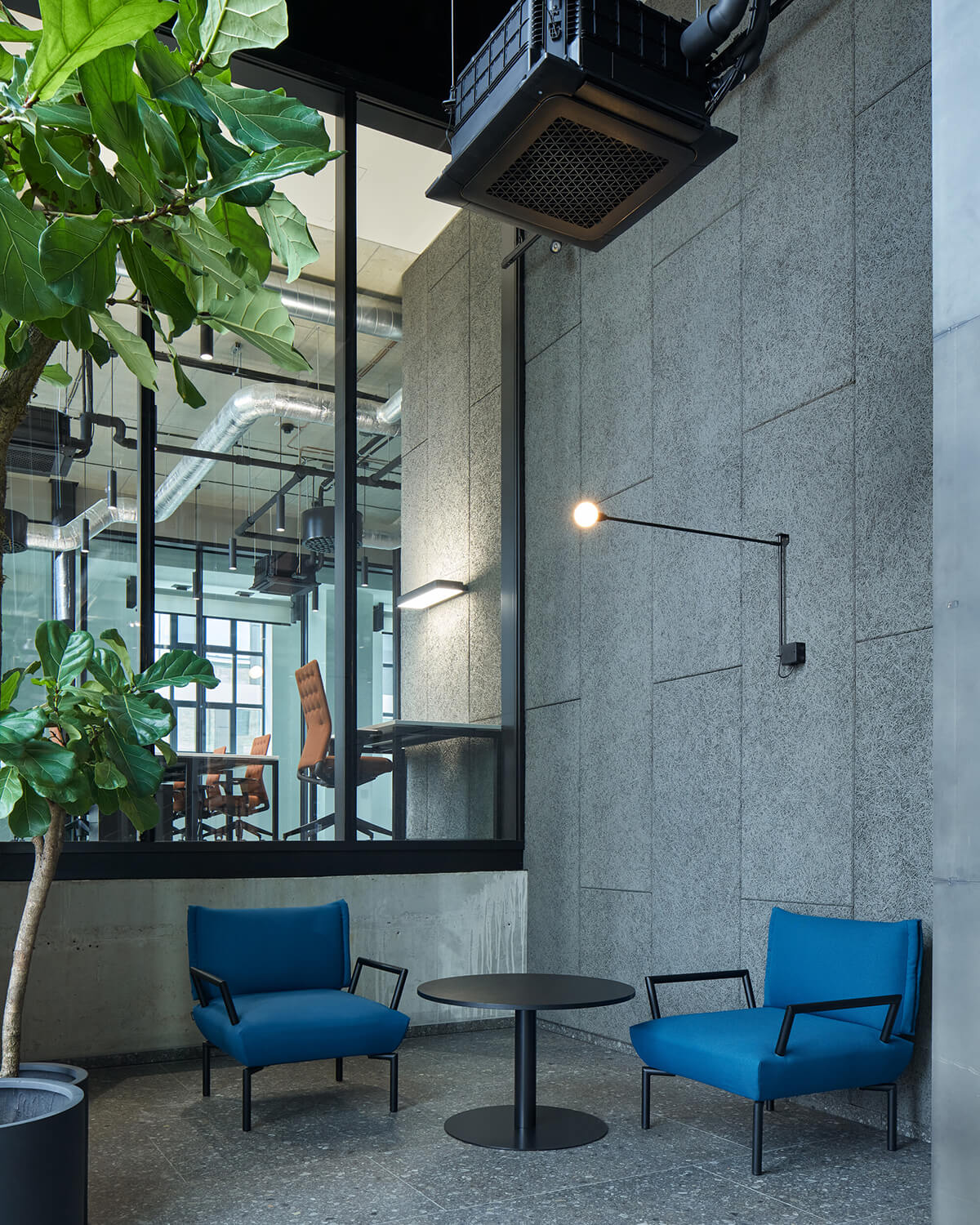 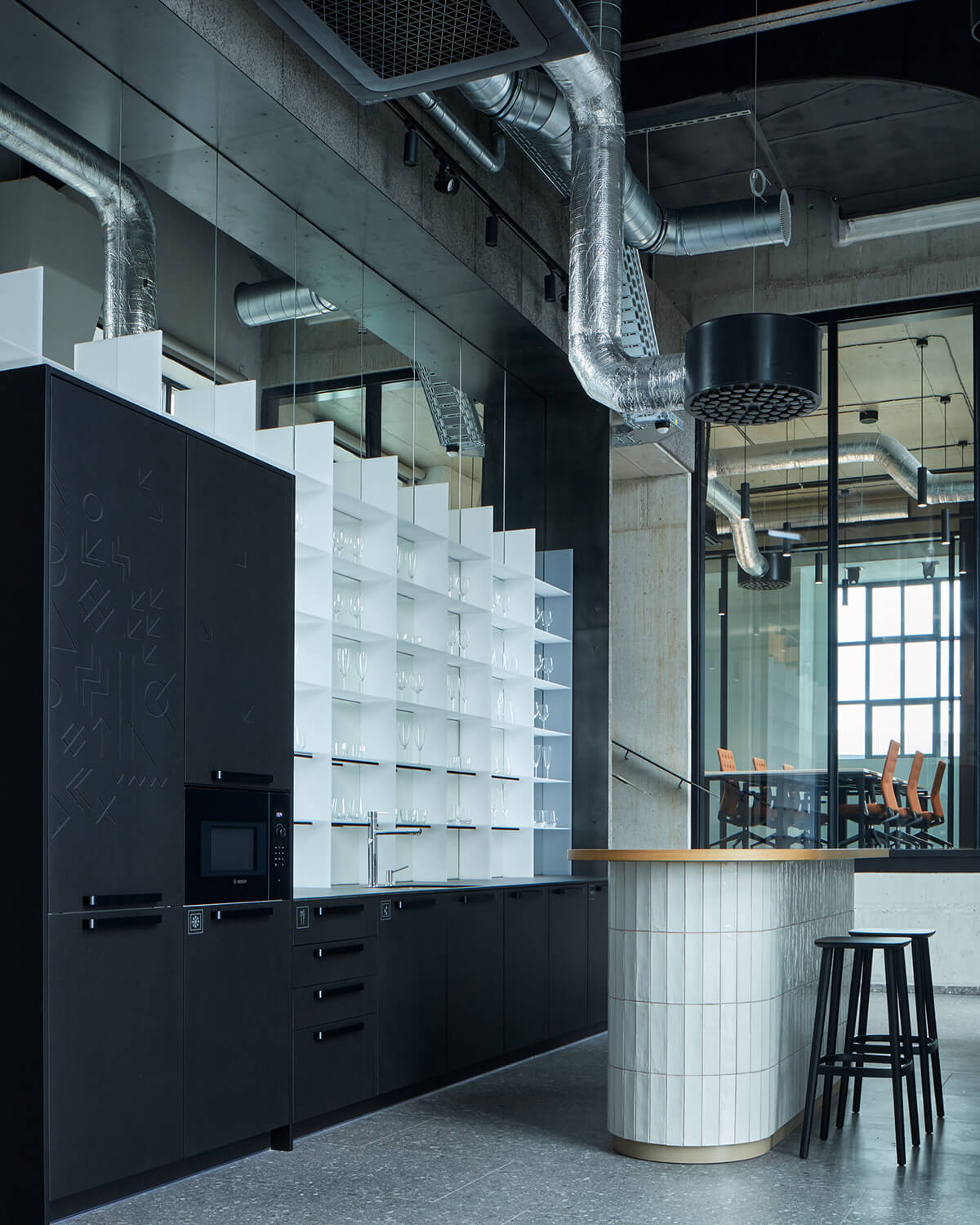 Although the space feels decidedly modern, traces of Jurkovic’s style remain in the form of graphic motifs, incorporated through decorative design details such as cabinetry engravings and neon wall lighting. Artfully balancing old and new, Base4Work serves as a reminder that contemporaneity need not be sacrificed in the name of preservation. 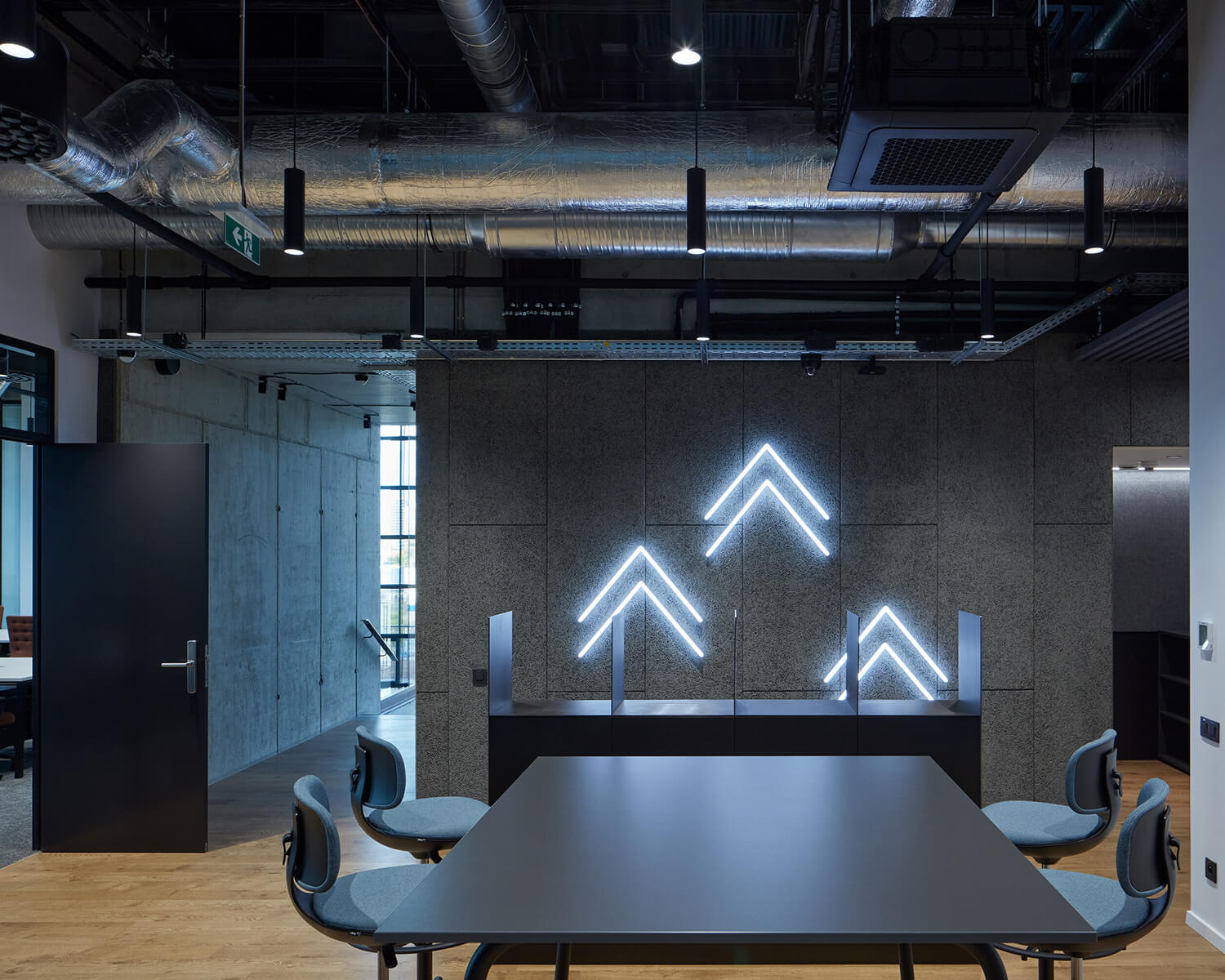 The adaptive re-use project embraces the functionalist building’s industrial past with an almost futuristic sensibility.