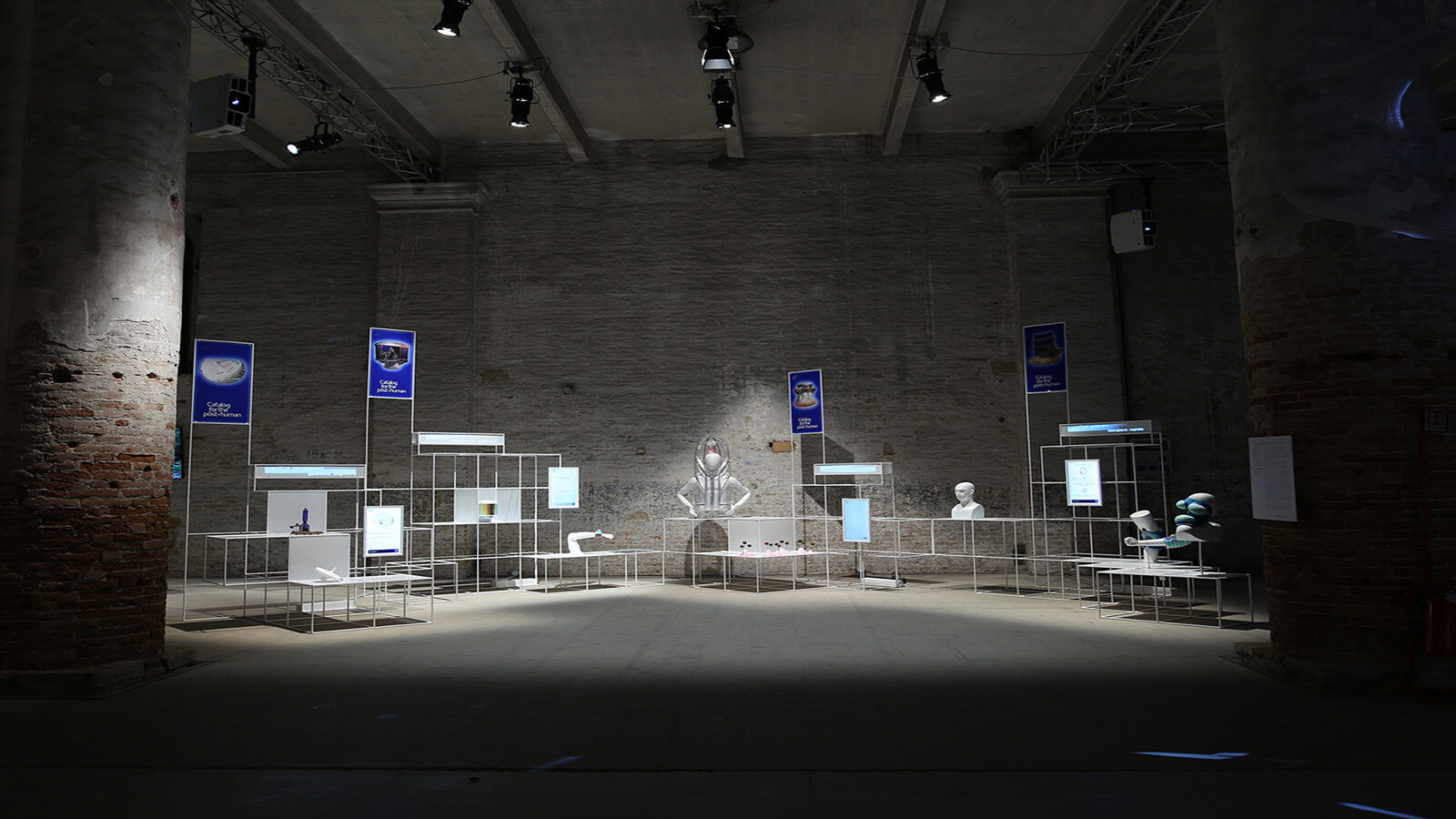 In a new satirical exhibit entitled Catalog for the Post-Human, the studio brings attention to the contemporary human condition.

“Today, the principle of optimization thrives in extremity,” writes cultural critic Jia Tolentino in her 2019 collection Trick Mirror. In the essay “Always Be Optimizing,” she addresses the constant pressures placed upon us to function as “ideal beings” in a late-capitalist gig economy: How can we constantly improve our productivity? How can we engineer humans to perform like machines?

These same questions are behind Chicago studio Parsons and Charlesworth‘s presentation at the 2021 Venice Biennale. Entitled Catalog for the Post-Human, the satirical exhibit comprises a selection of sculpted “physical and mental augmentation” products, presented in the form of a trade fair booth.

To engineer the objects in their futuristic showcase, Parsons and Charlesworth began with an exhaustive research process, which led them into a wormhole of clickbait headlines about the latest optimizing trends. From articles such as “I Tried a $600 Sleep Robot. It Was Fine” and “Dirt Has a Microbiome, and It May Double as an Antidepressant” to “The Domino’s Pizza Checker is Just the Beginning: Workplace Surveillance is Coming for You” and “Amazon is Developing a Wristband that Tracks Your Emotions,” the pair soon discovered that their speculations were only a small step removed from reality. 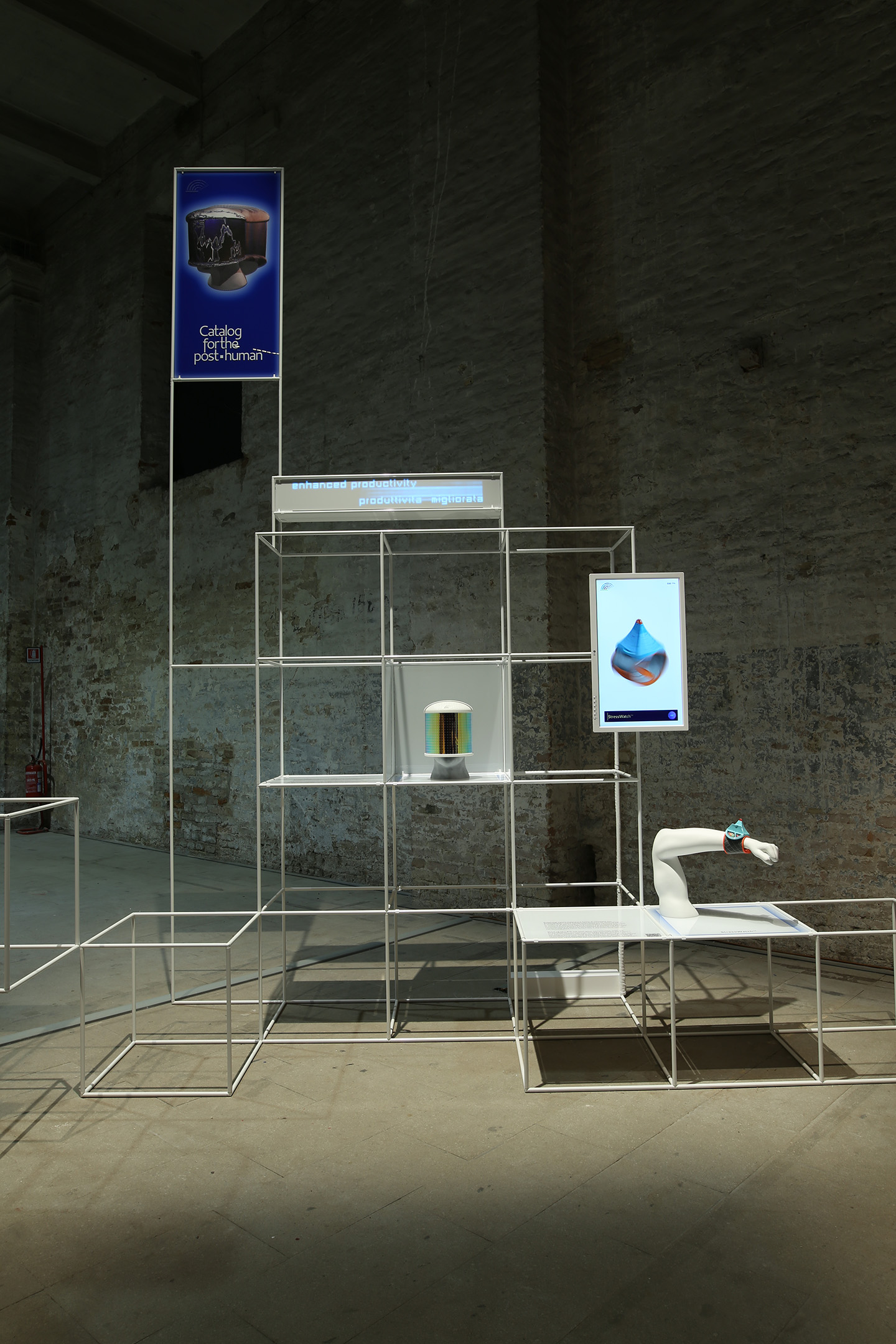 Each of the exhibited objects are made of various materials — from ceramics and stainless steel to latex. According to the design studio, these items “satirize the contemporary capitalist need to be permanently cognitively sharp, quantifying yourself with data, and able to work the long and irregular hours assigned by algorithm-led corporations.” 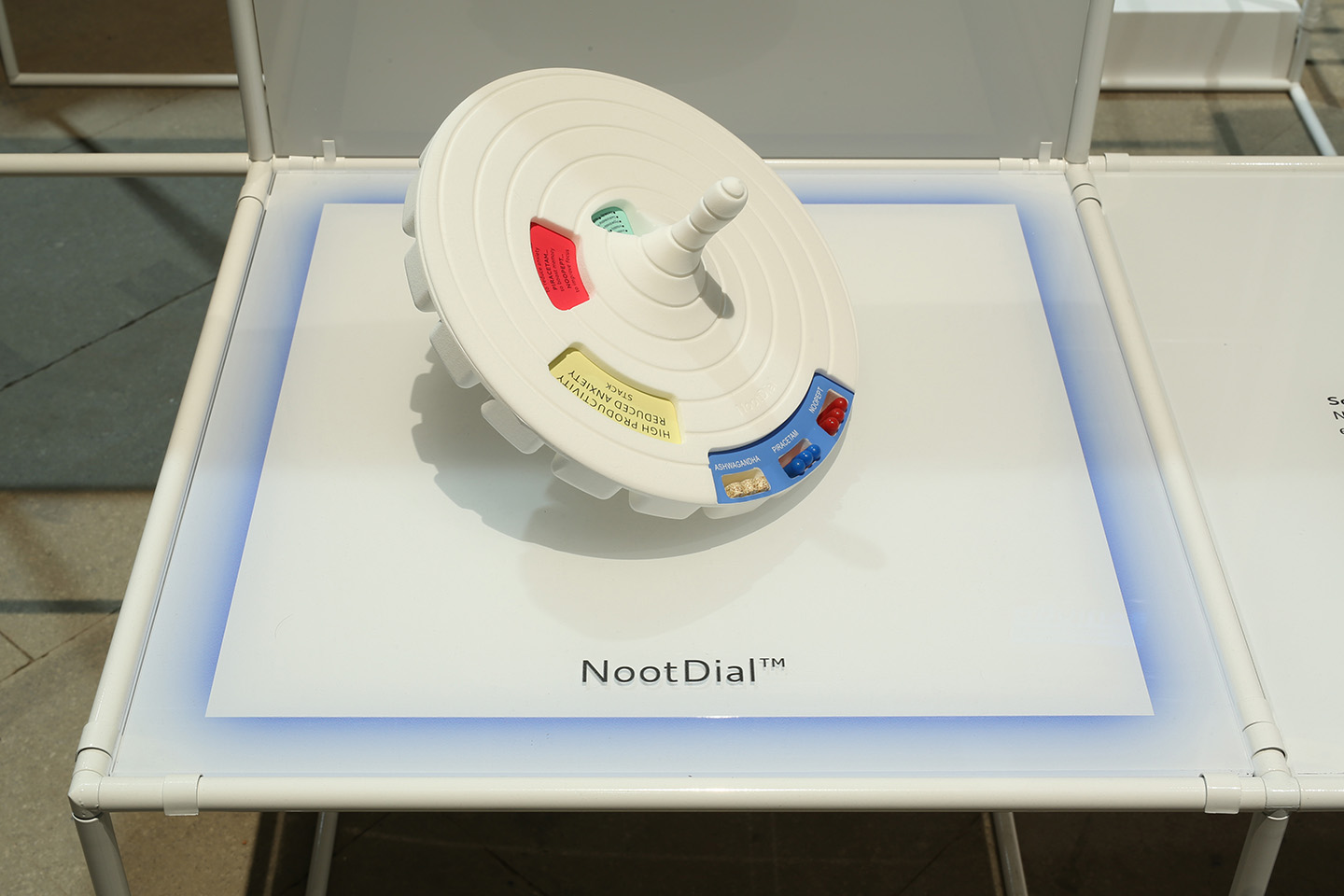 For instance, the Nootdial’s comedic name belies its sinister purpose as a multivitamin and nootropic dial, which delivers a shot of brain-enhancing chemicals to neurons when stimulated. 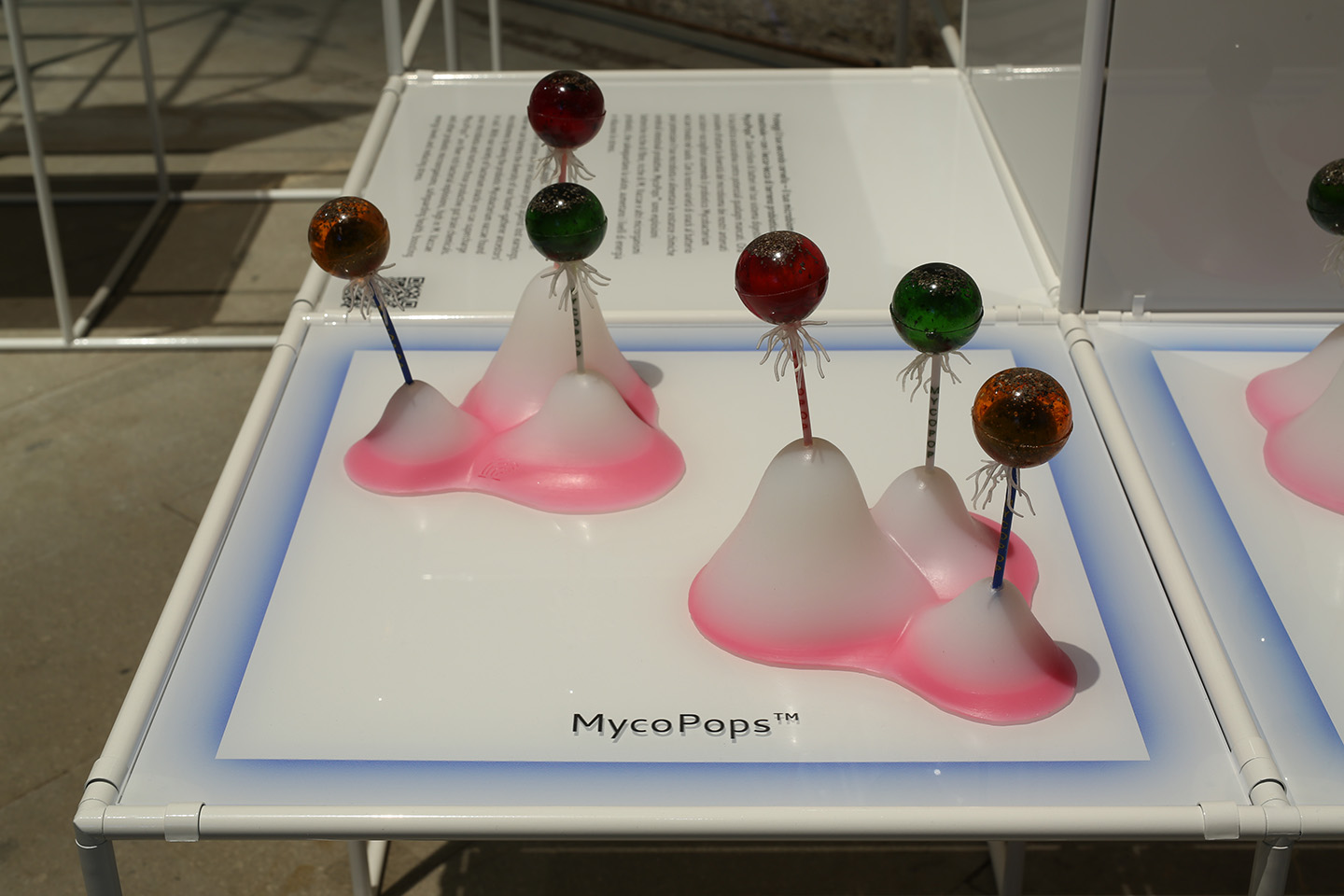 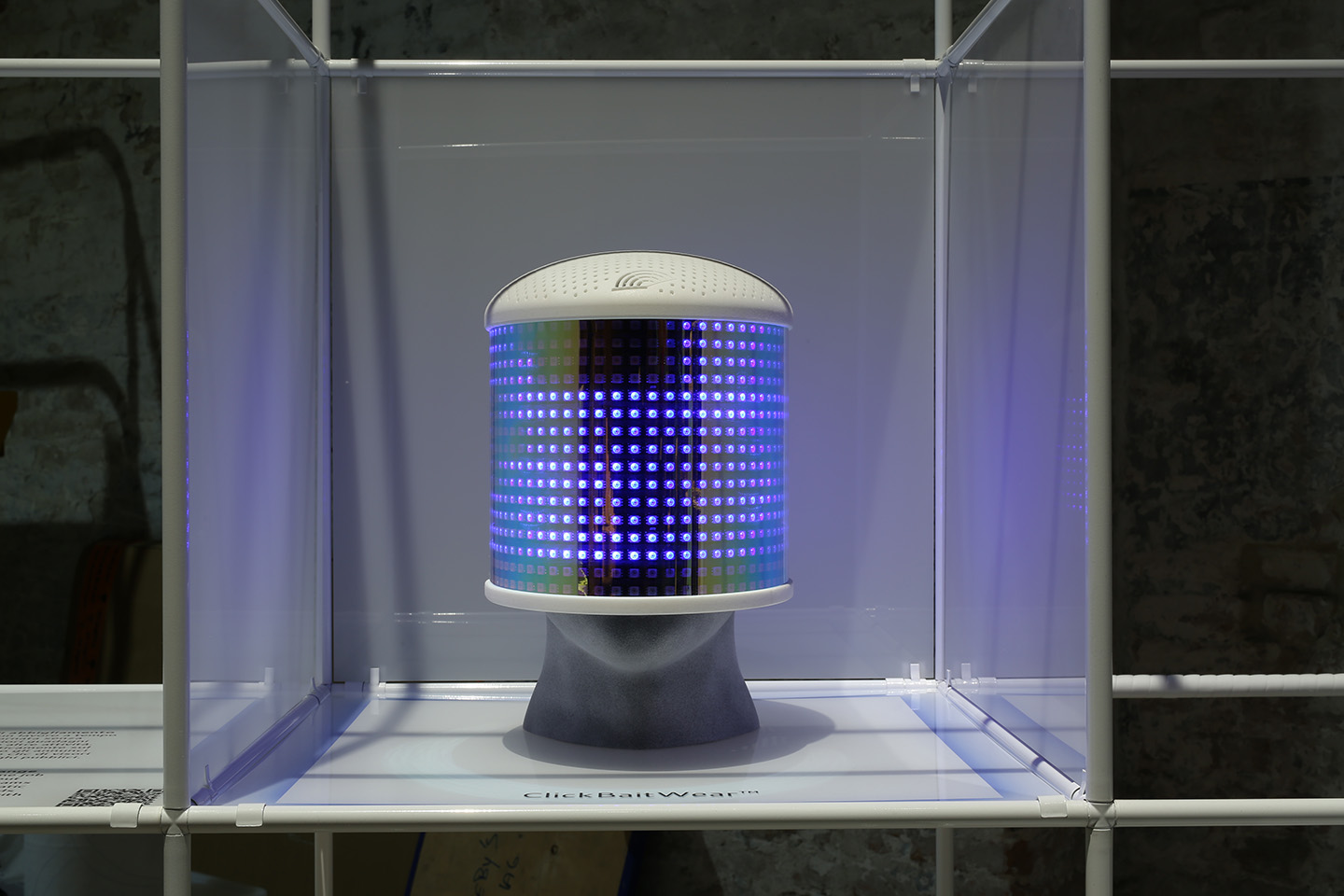 The ClickbaitWear turns the average pedestrian into a walking advertisement: The visor displays paid content on an LED screen while you go about your day, taking the work out of social media-influencing. 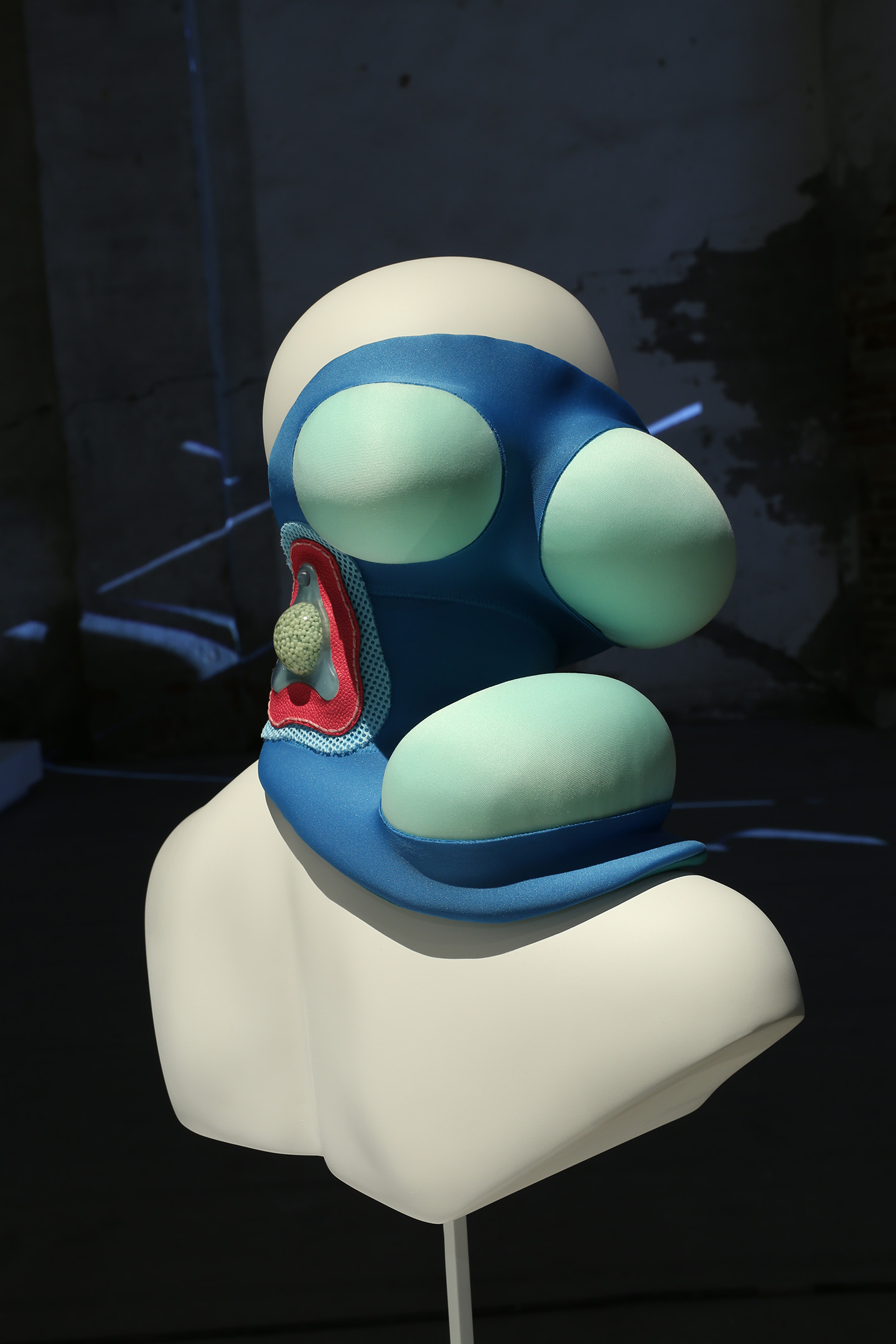 Meanwhile, SleepSnackers — contrary to what its name suggests — is not a brand of melatonin candy, but a miniature quilt which can be attached to any body part for a quick power nap. 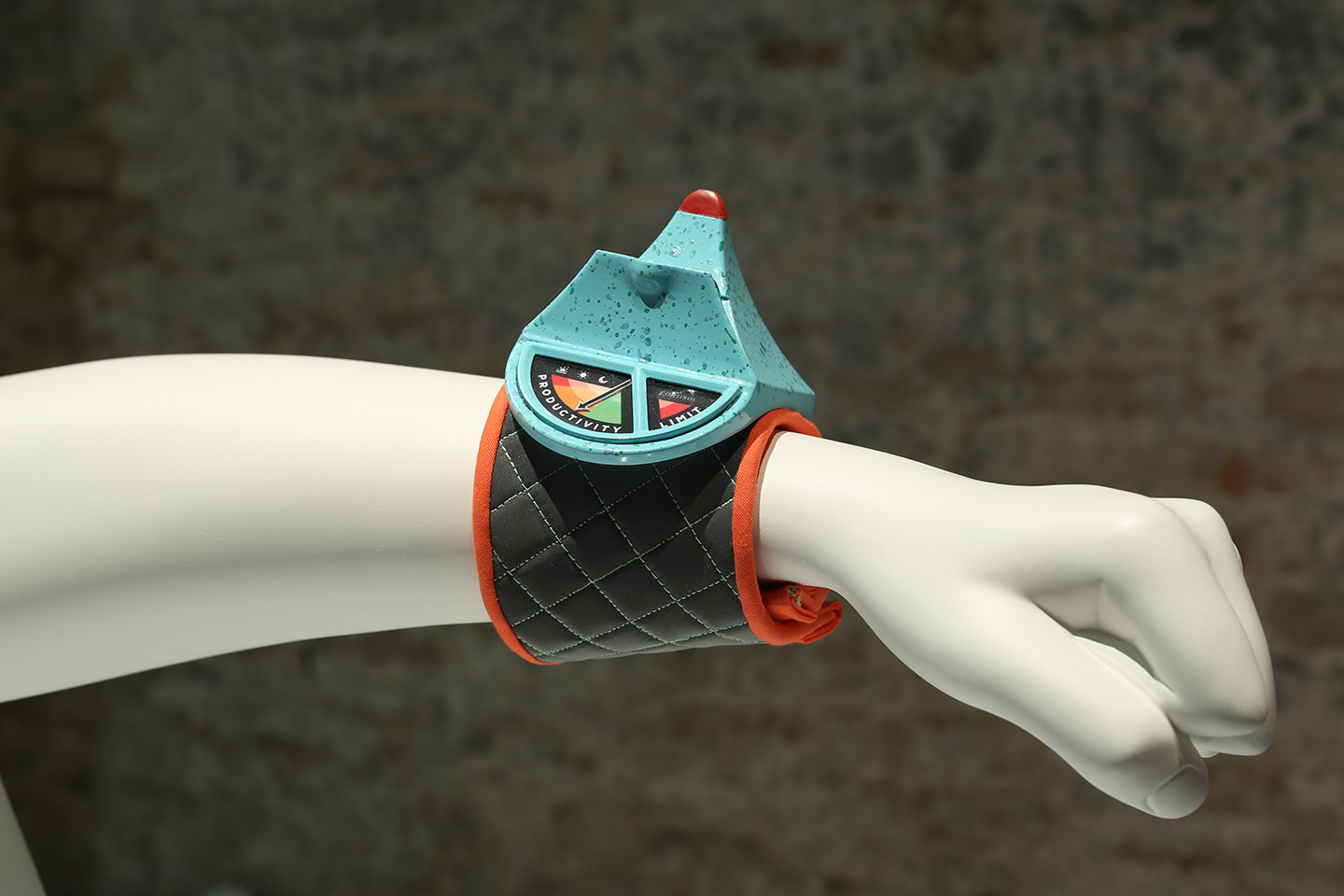 Finally, the StressWatch monitors levels of cortisone, the fight-or-flight hormone, to ensure that they don’t cross into dangerous territory — but stay maximized at all times. 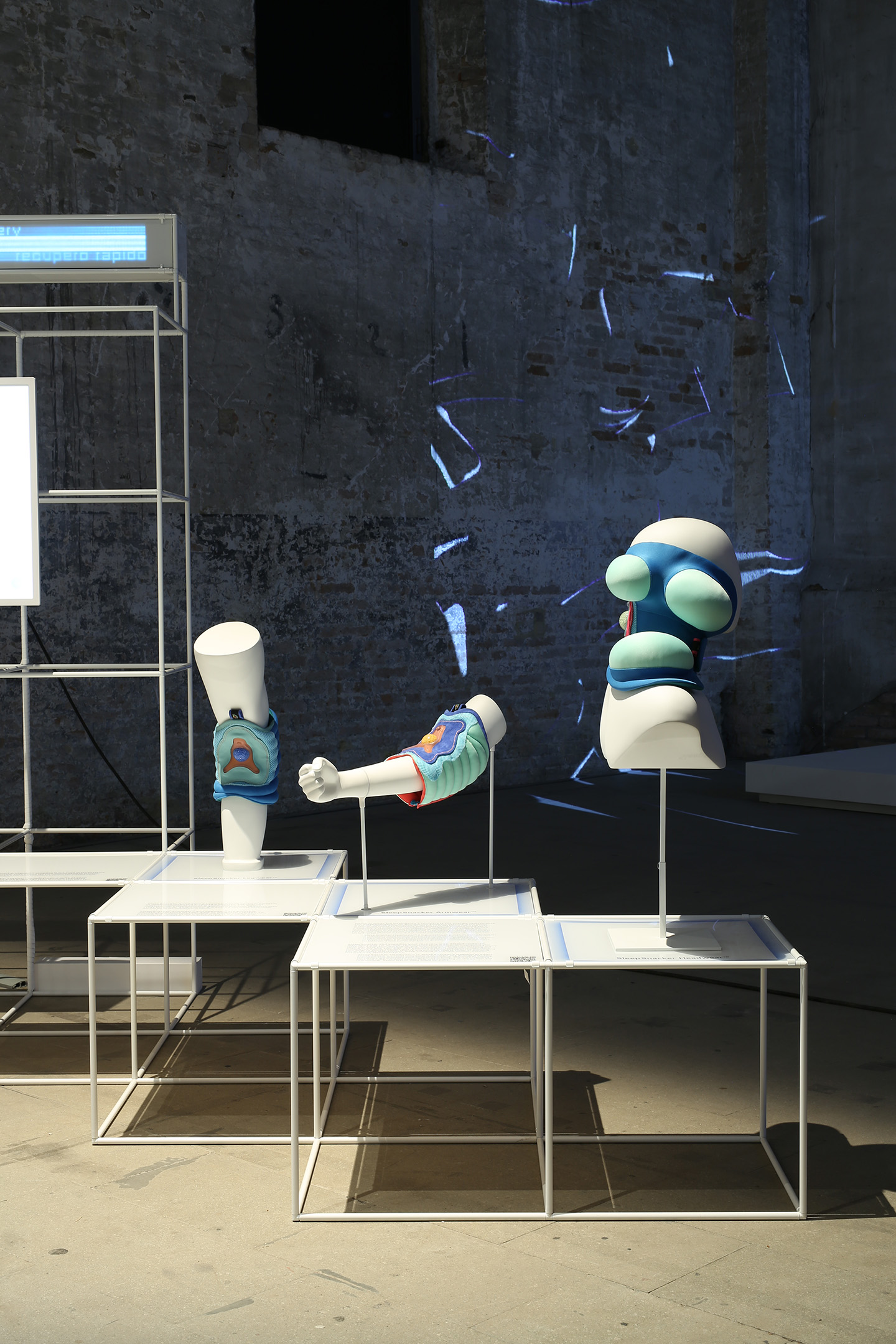 These are only a few of the exhibit’s myriad objects, which are displayed across an Abstracta system of shelves. Harsh LED panels and spotlights add to the eerie effect, reinforcing the industrial setting. A microsite catalogue inventory in the form of an online shop created by Hour Studio — with a “brand identity” by Michael Savona — acts as a complement to the exhibition. Try adding an item to your cart, though, and you will be redirected to an error page indicating that “your enhancement selection is currently out of stock.” 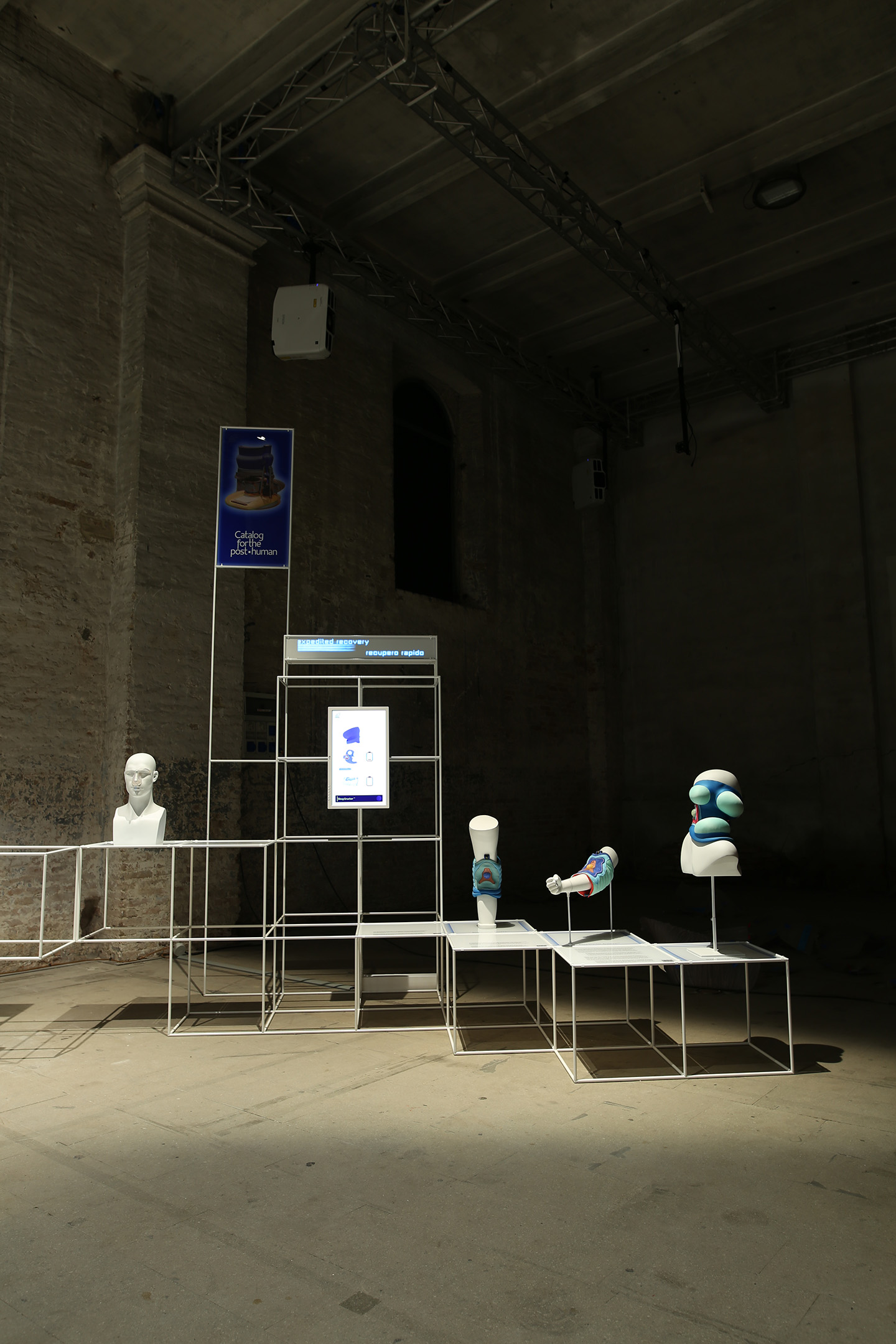 The Venice Biennale isn’t the first to host Catalog for the Post-Human. In 2019, the concept was toured as part of Designs for Different Futures, an exhibition at the Walker Arts Centre and the Philadelphia Museum of Art. And this isn’t Parsons and Charlesworth’s first venture into the dystopian: In Case of Emergency, a poignant installation exploring the possibilities of catastrophic risk in a Moonrise Kingdom-esque set of rustic survival gear, hits similar thematic notes. Catalog for the Post-Human is as much a statement on the unstable nature of late-stage capitalism and the gig economy — which forces workers to see themselves as products — as it is an exercise in speculative design, exploring just how far human bodies can be manipulated and transformed. 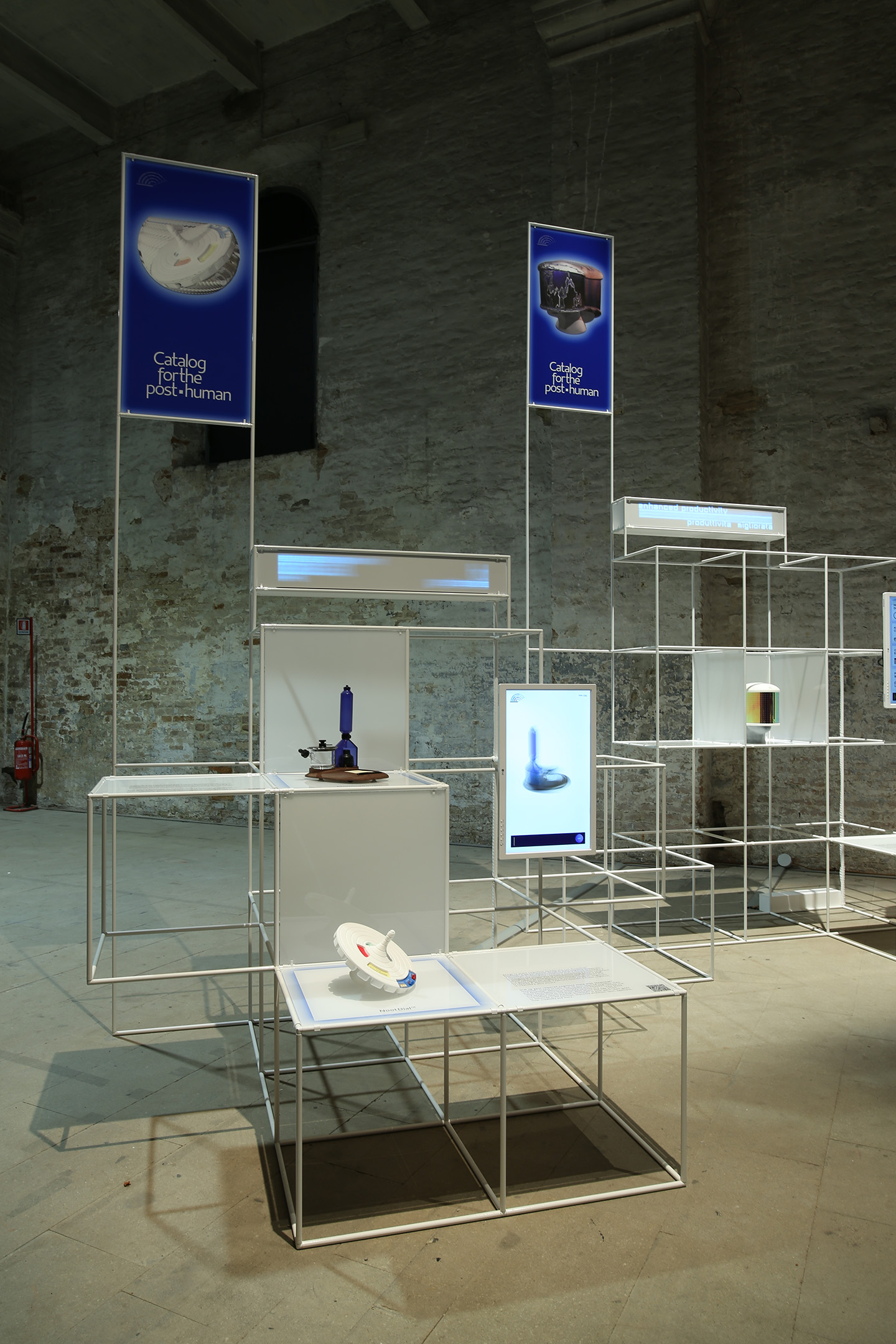 Instead of offering an answer to the biennale’s perennial question: “How Will We Live Together?,” the exhibit offers a cautionary tale. Ultimately, is the infinitely optimizable potential of the human mind and body exciting or depressing? That remains for visitors to decide. Perhaps this line from Tolentino puts it best: “We have not optimized our wages, our childcare system, our political representation. We have maximized our capacity as market assets. That’s all.”

Catalog for the Post-Human will be on display at the Venice Biennale’s Arsenale space until November 21st 2021.

In a new satirical exhibit entitled Catalog for the Post-Human, the studio brings attention to the contemporary human condition.