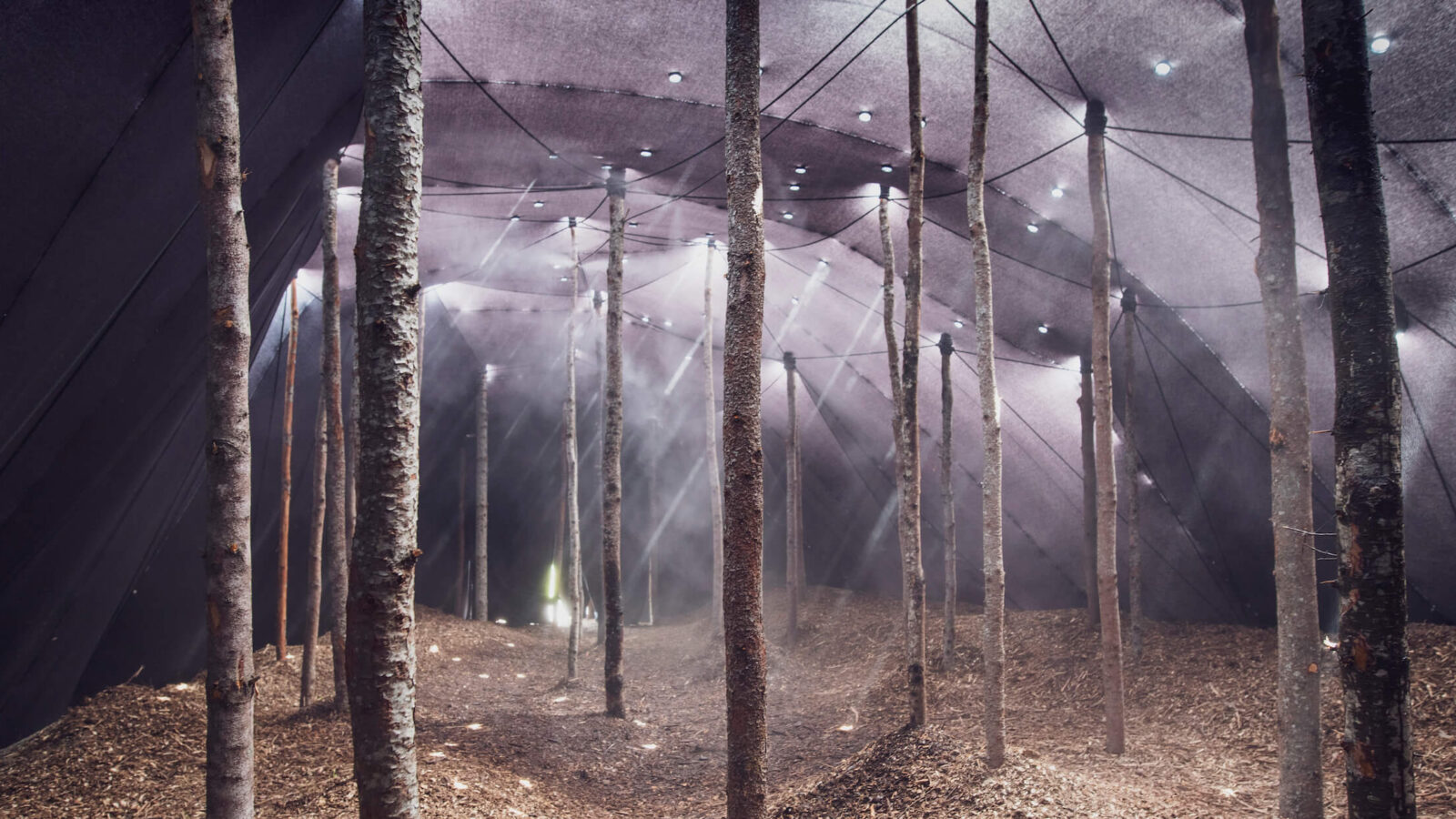 Over the two decades since Alexander Reford co-founded the International Garden Festival on the grounds of his former family estate in Quebec’s Gaspésie region, the annual celebration of cutting-edge landscape design has become a global player on the land-art circuit and commissioned more than a few iconic installations.

Claude Cormier’s Blue Stick Garden, an array of vividly painted poles that the then-emerging Montreal designer embedded along a forest pathway for the Festival’s inaugural edition, became an instant classic that travelled to other sites in Canada and Europe. 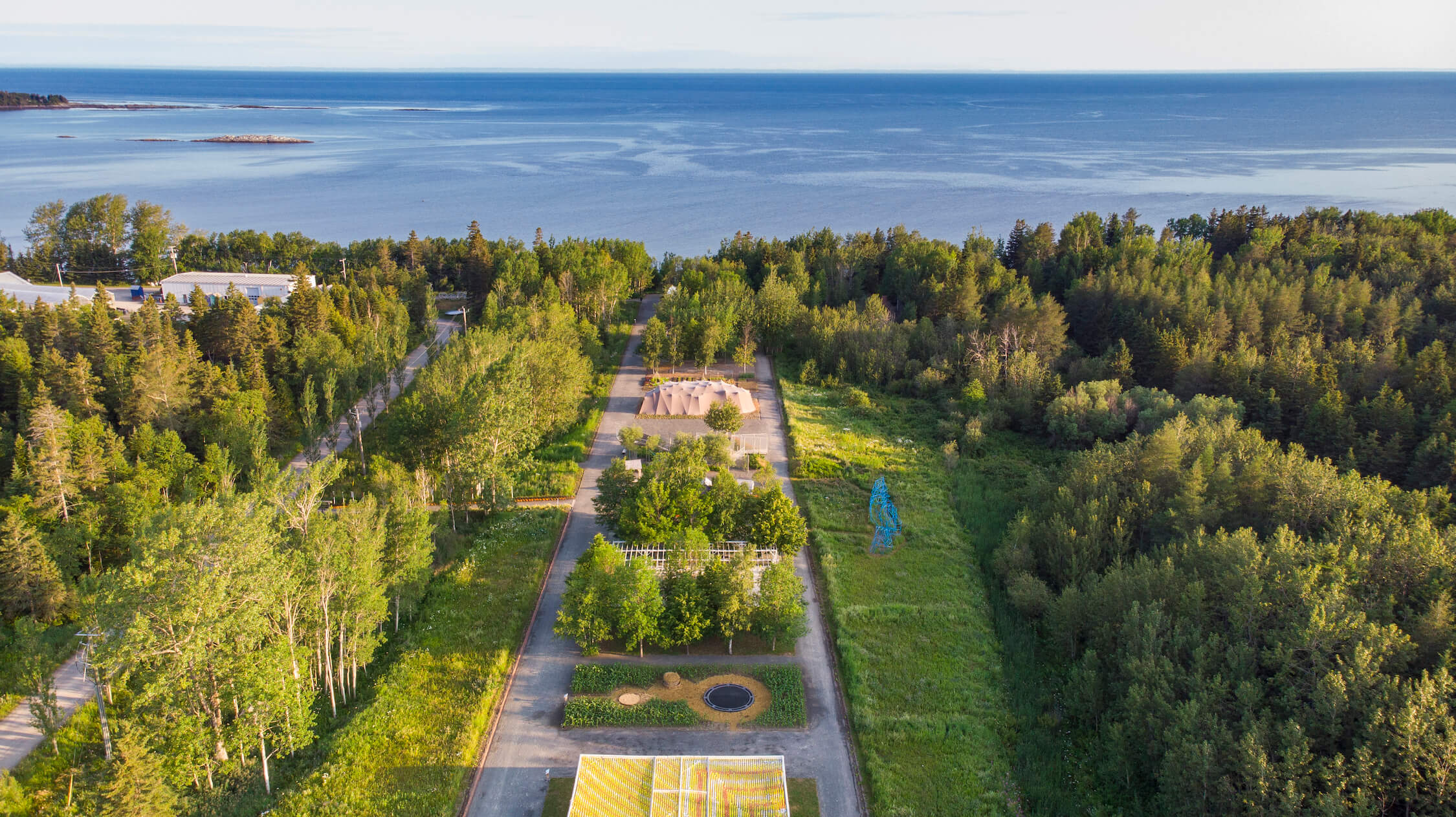 Amsterdam-based Johan Selbing and Anouk Vogel’s Courtesy of Nature, installed in 2013 and still standing on its site today, is another provocative stunner, featuring a double-trunked trembling spruce soaring incongruously through the open top of a gallery-like volume painted black on the outside and white on the inside. 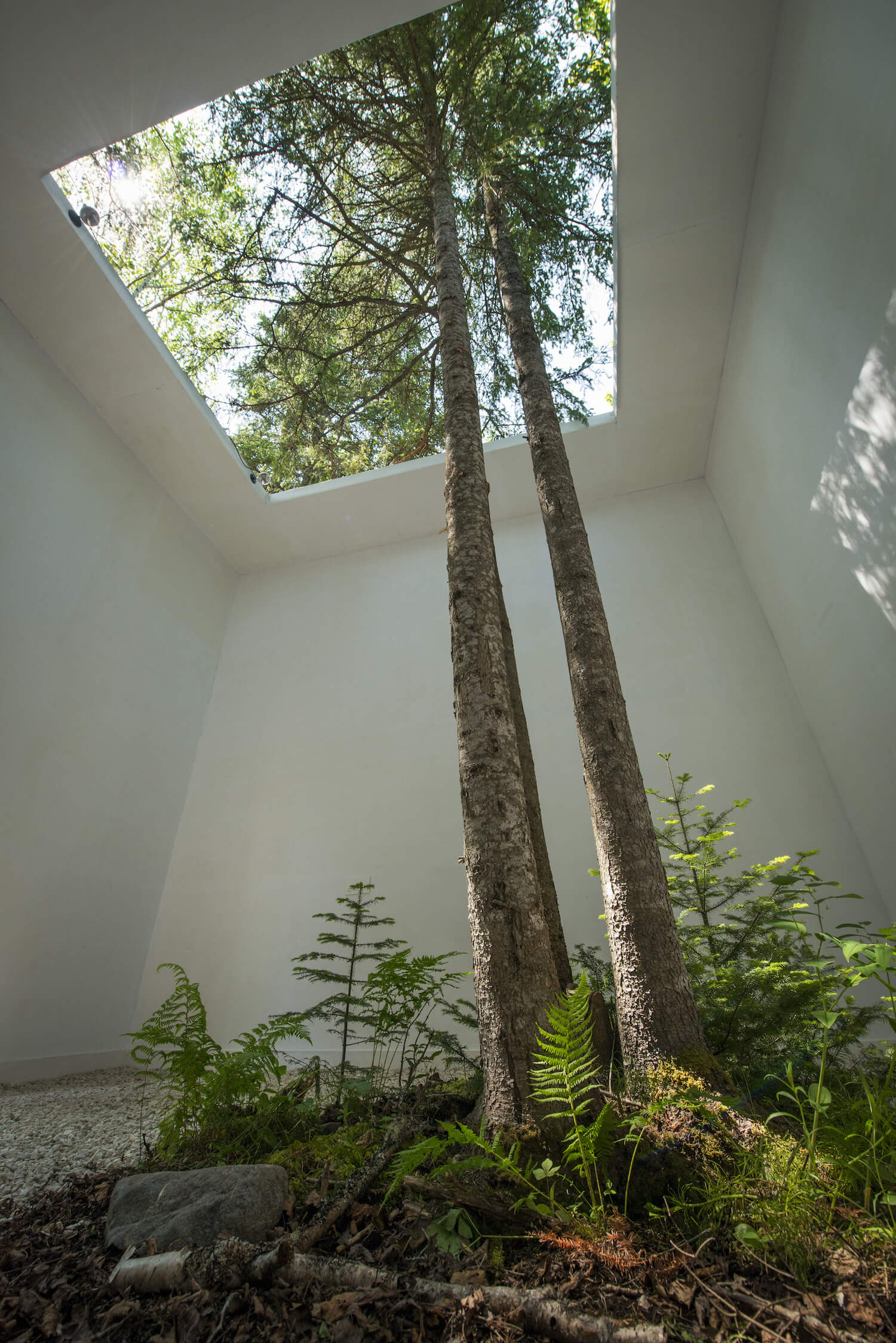 Are these installations art? Garden follies? Mere accessories to nature or significant enhancers of their surroundings? One of the great strengths of the IGF, whose history and programming make it unique in North America, is the way in which it has challenged the perceptions of what a garden is and can be among everyone who experiences it.

“The International Garden Festival is an adventure both for the designers and its organizers,” wrote Alex Reford, who recently gave me a personal tour of the Festival site, including the six new works installed this summer, in his forward to the 2007 monograph Hybrids: Reshaping the Contemporary Garden in Métis. And this year – the IGF’s 20th – has been no exception. 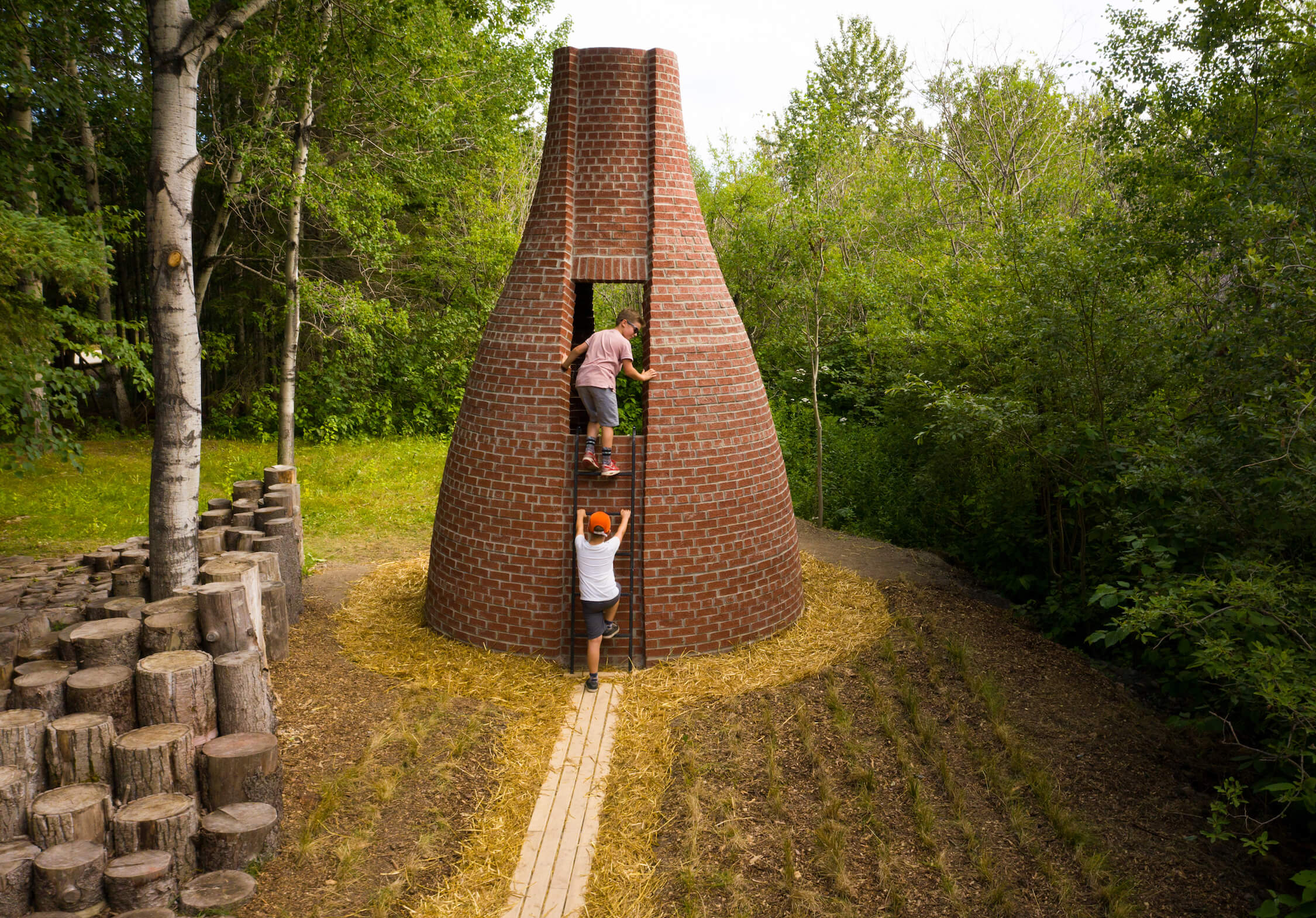 Among the highlights of the 2019 edition, which runs until October 6 and has “terrains de jeu” (or “playgrounds”) as its theme, is one that was only finished a little after the Festival’s opening day in June: Le dernier petit cochon, a shapely brickwork structure, by Montreal’s Appareil Architecture, offering a real-life take on the Three Little Pigs story.

According to Reford, many of the IGF’s installations are erected every year with the help of volunteer labour, although Le dernier petit cochon, because of its intricacy, required the expertise of stonemason Gilles Roy and a little more time to complete. 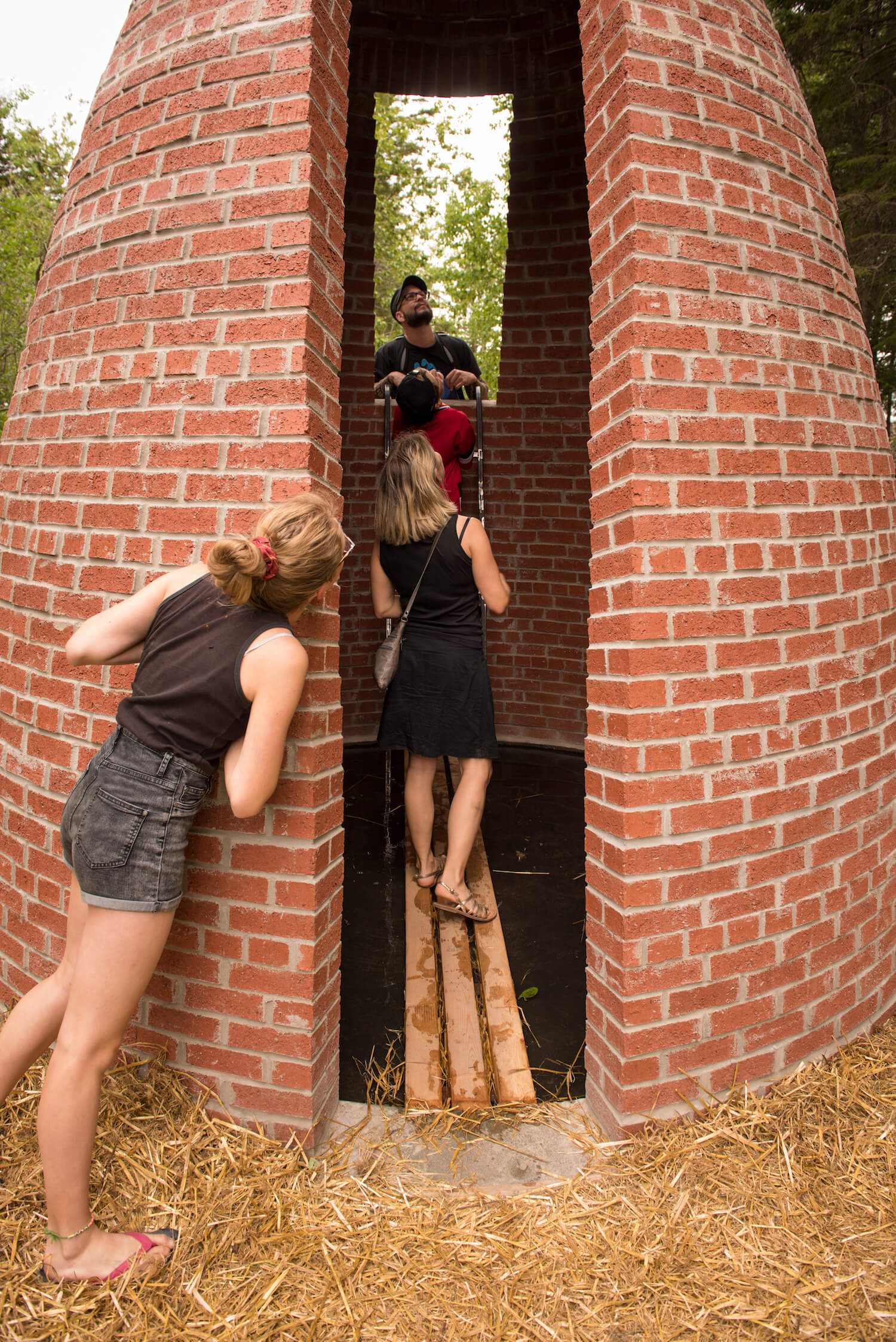 Resembling a giant pottery kiln or red-brick Italian trullo, Appareil’s installation considers the fable that inspired it from the perspective of the wolf, obliging passersby to clamber over a small black-metal ladder to enter the open-topped structure.

“The only way to get there is to go through the chimney,” the Appareil team (comprised of Kim Pariseau, Justine Dumas, Marc-Antoine Juneau and Jérémie Parentin) says in its playful vision statement, although there is also a larger doorway on the other side of the structure through which the less agile can enter. “In the process of discovery, explorers will enjoy unexpected points of view on the forest, mixing occasional glimpses of light with games of reflection.” 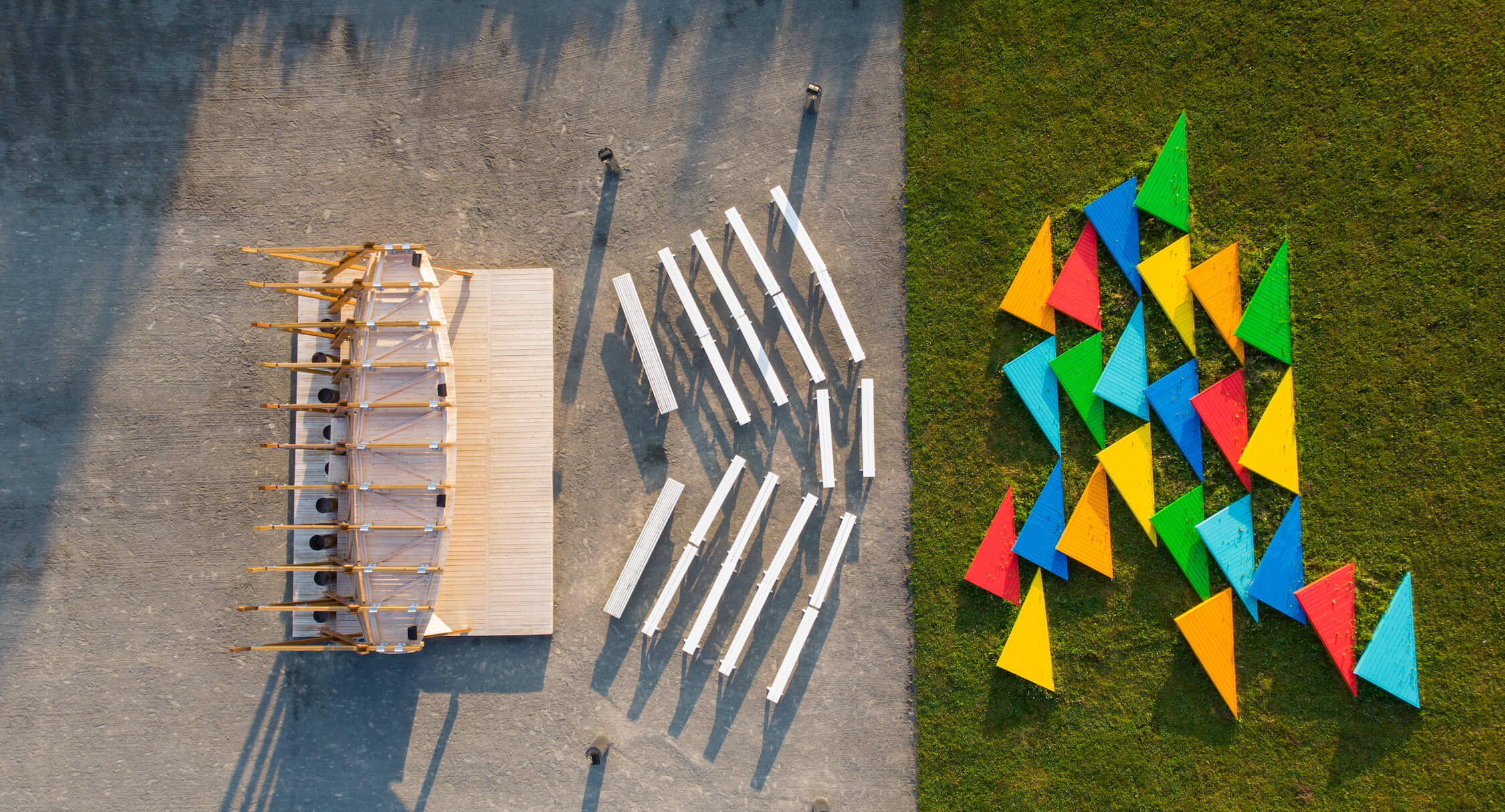 Another installation that provides new viewpoints on the Festival site is José Luis Torres’s Ici et ailleurs, a large-scale “collage” of multicoloured wood triangles embedded in the berm overlooking a recently built grandstand near the entrance to the Gardens. 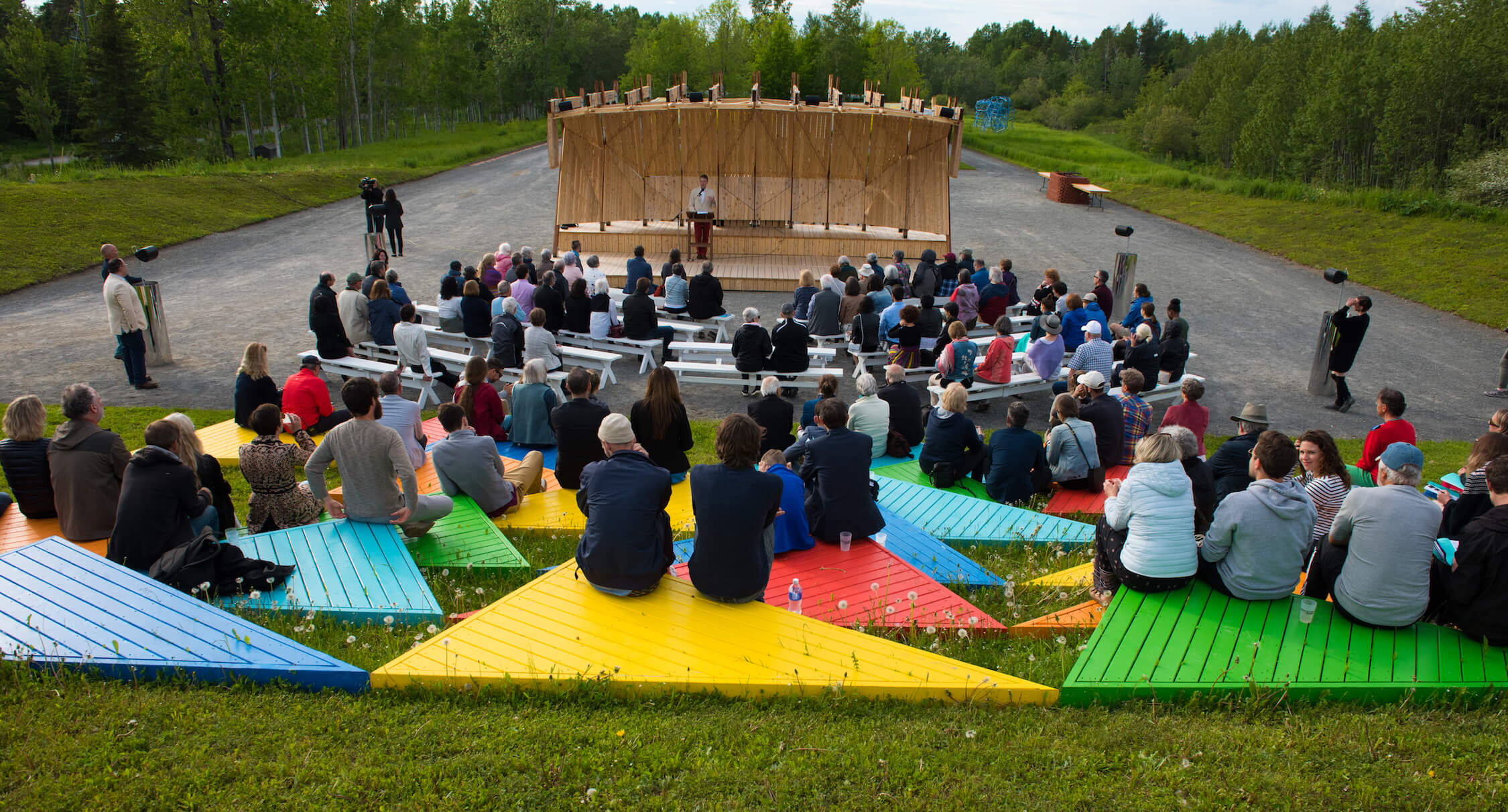 The triangles function as both spectacle and seating, their overlapping configuration punctuating one end of the linear site on which many of the IGF’s installations – both new and older – sit. “The result,” says Torres, who was born in Argentina and is now based in Quebec, “is a sculptural device that invites contemplation of the surrounding space and suggests different possible horizons to visitors.”

If Le dernier petit cochon and Ici et ailleurs encourage new interpretations of their surroundings, another pair – Forêt and Dirt ground – constitute their own ecosystems. 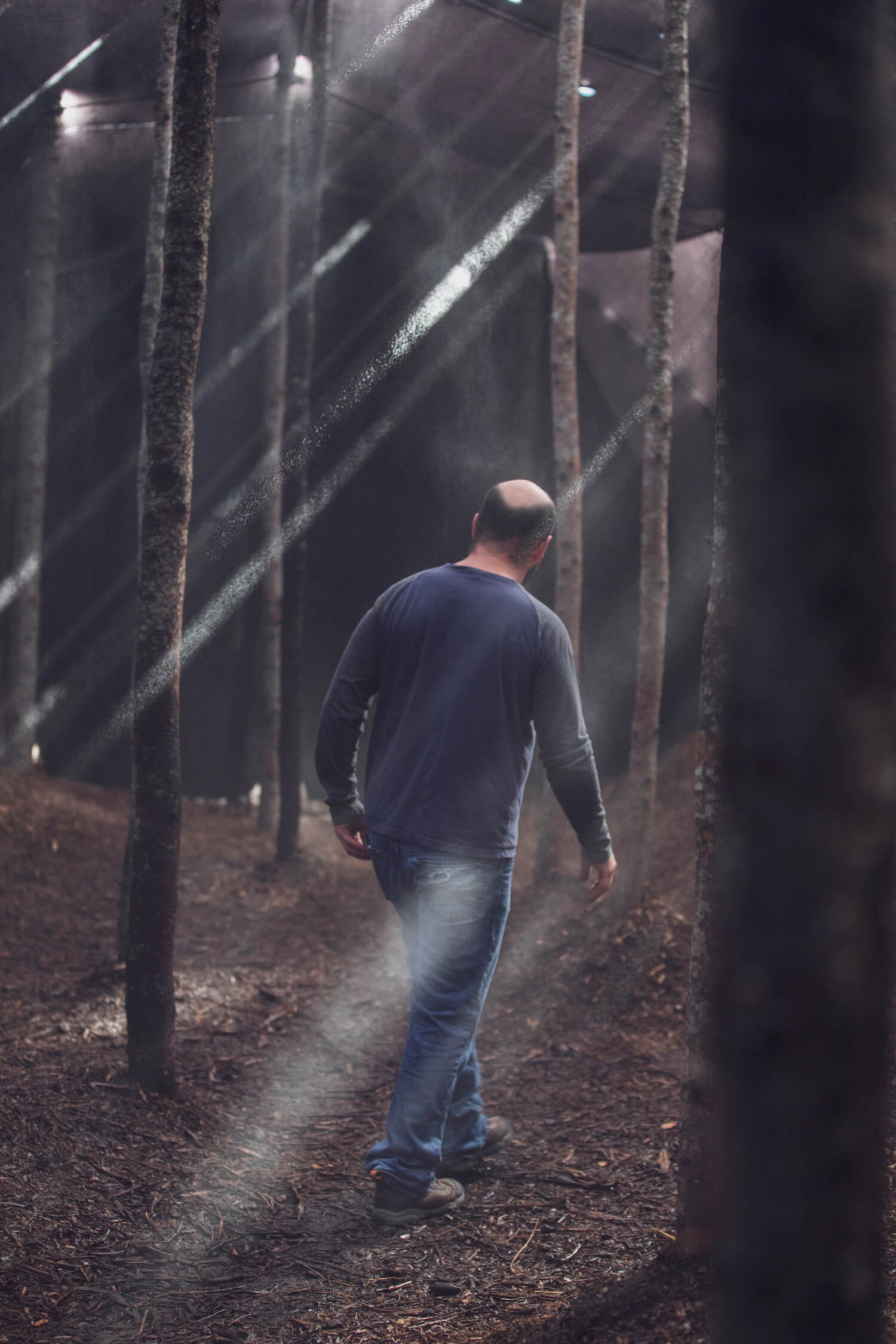 The former, by artist Mathilde Leveau of Quebec City and architect/scenographer Ronan Virondaud of France, is a misty stylized forest set within a tent-like enclosure penetrated by shafts of light coming through openings in the canopy.

Dirt ground, meanwhile, is by architect Agnese Casadio and landscape architect Silvia Bachetti of Italy. Consisting of a beautifully textured curving wall that leads visitors to a surprising focal point – “a field of common dirt,” as Bachetti and Casadio put it – the payoff may be a letdown for some, but it’s also a sly and even profound commentary on the preciousness of nature (not to mention a good old-fashioned dirt mound on which kids can frolic). 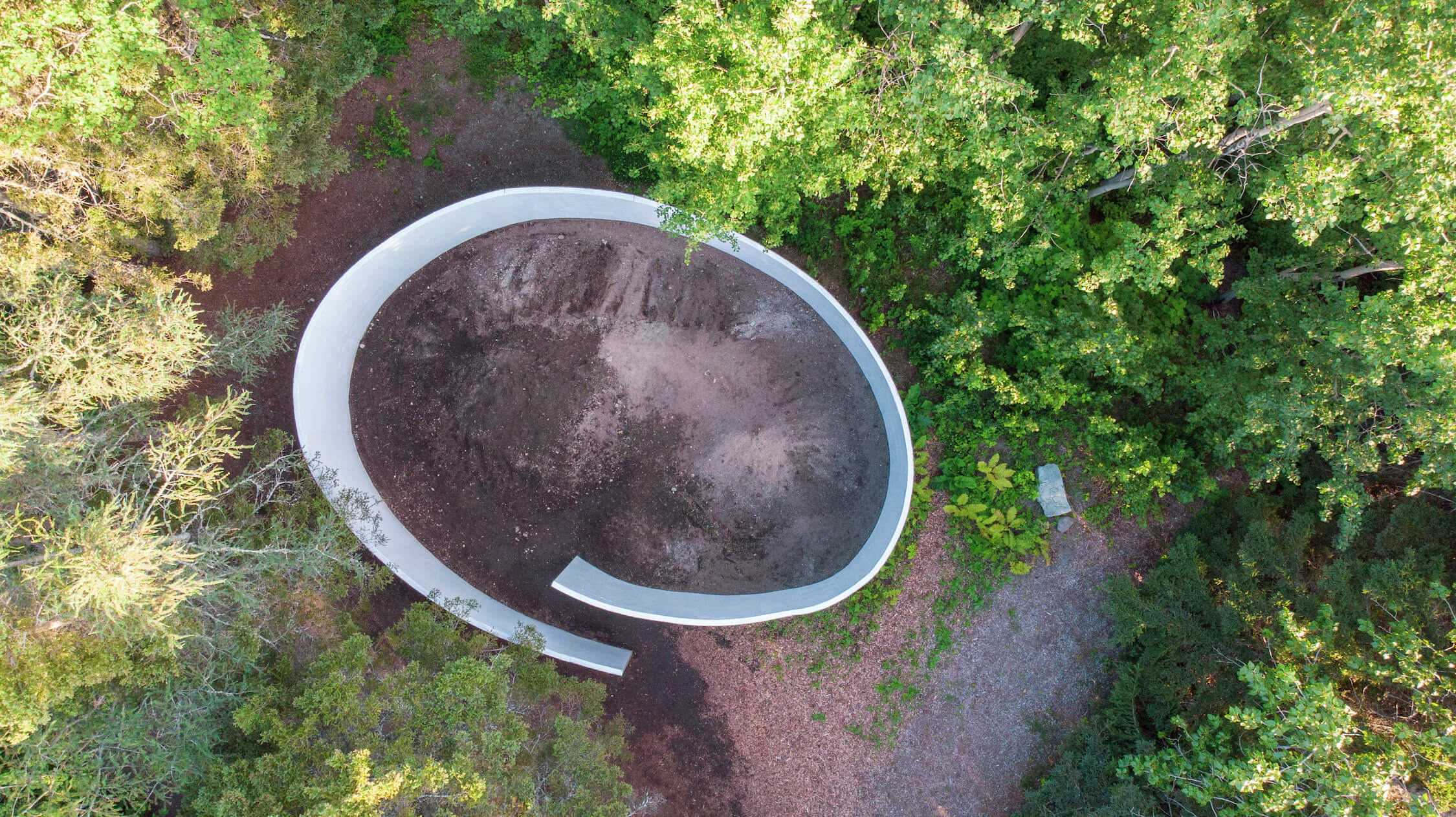 Dirt ground “invites visitors to reconsider their relationship with the environment,” explain Bachetti and Casadio. “It enhances the importance of soil not only as a fundamental substrate for life, but also as a source of unrestricted fun and a space of freedom that needs to be preserved in our overly built cities.” 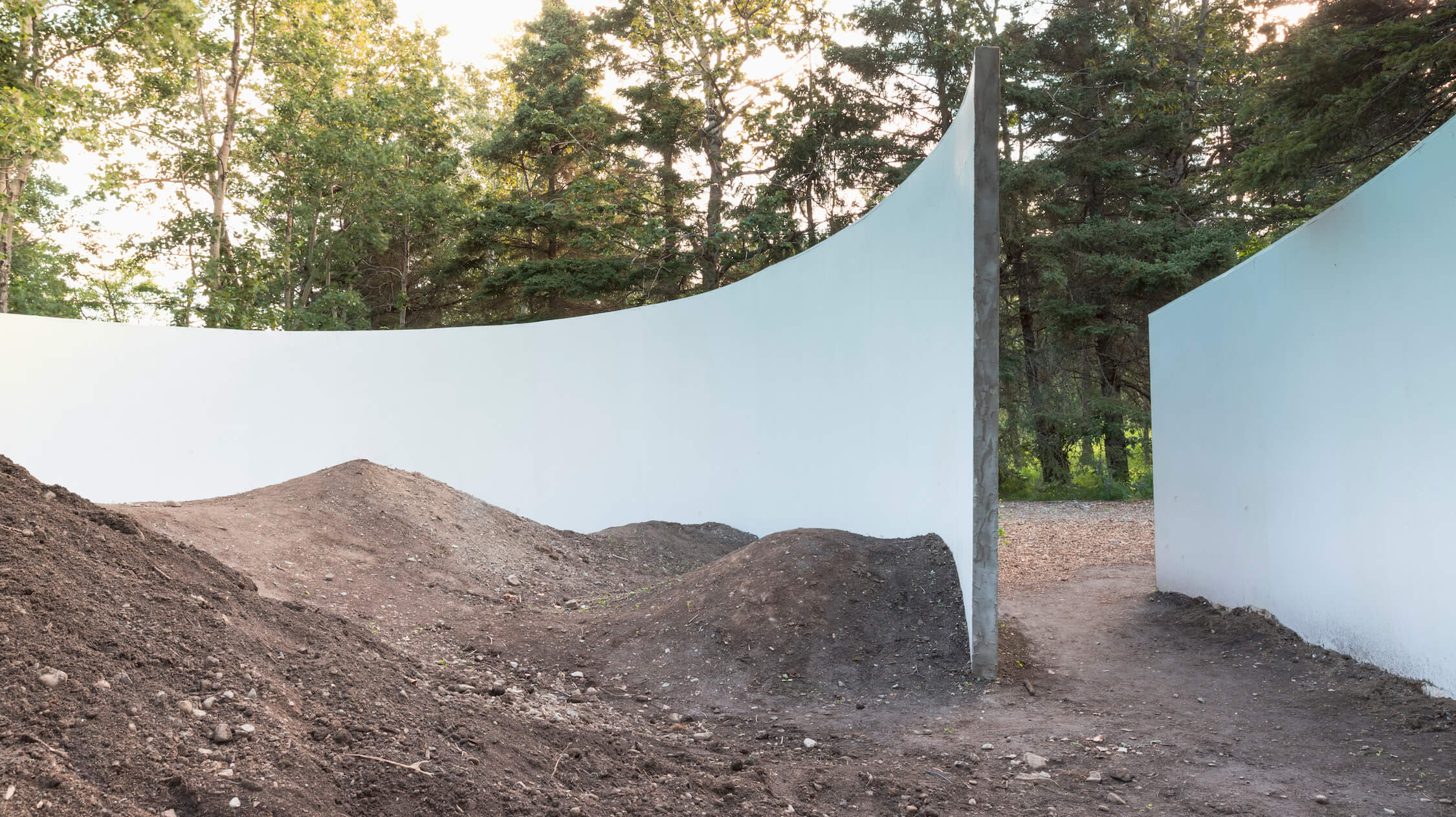 Rounding out this year’s installations are Making Waves and The Colors of Métis. The former, a colourful kinetic seesaw, was designed by University of Toronto architecture students Cornel Campbell, Thevishka Kanishkan, Reesha Morar and Anton Skorishchenko, with architecture prof Ted Kesick as advisor. 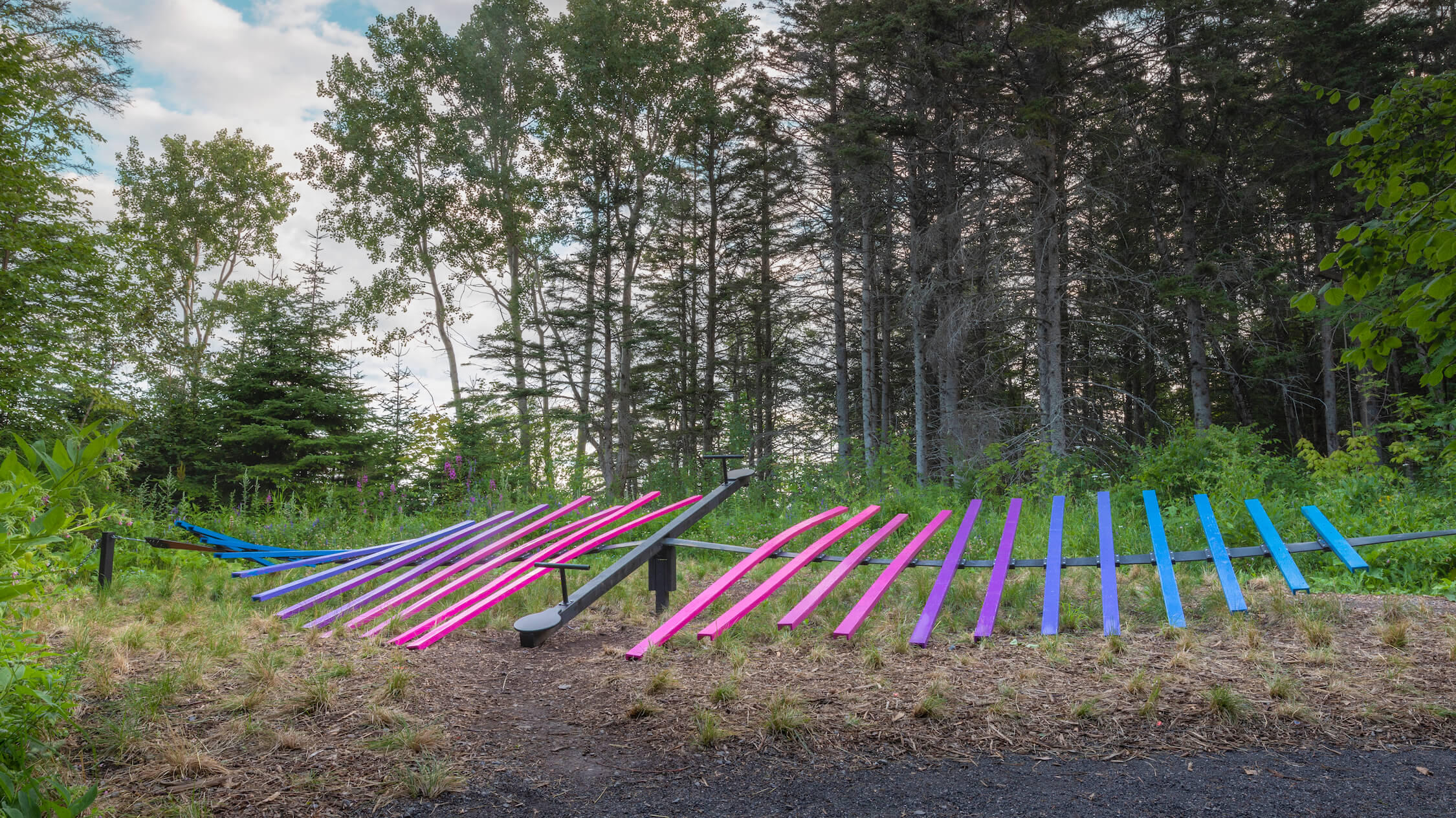 The latter, conceived by Sebastian Sowa, Gianluca Torini and Isabella Smolin of Germany, consists of a massive ground-level “canvas” on which visitors are invited to create a large “landscape painting” by affixing sponges bearing colours extracted from local soils, leaves and fruits to the bottom of their shoes and then walking across the surface. 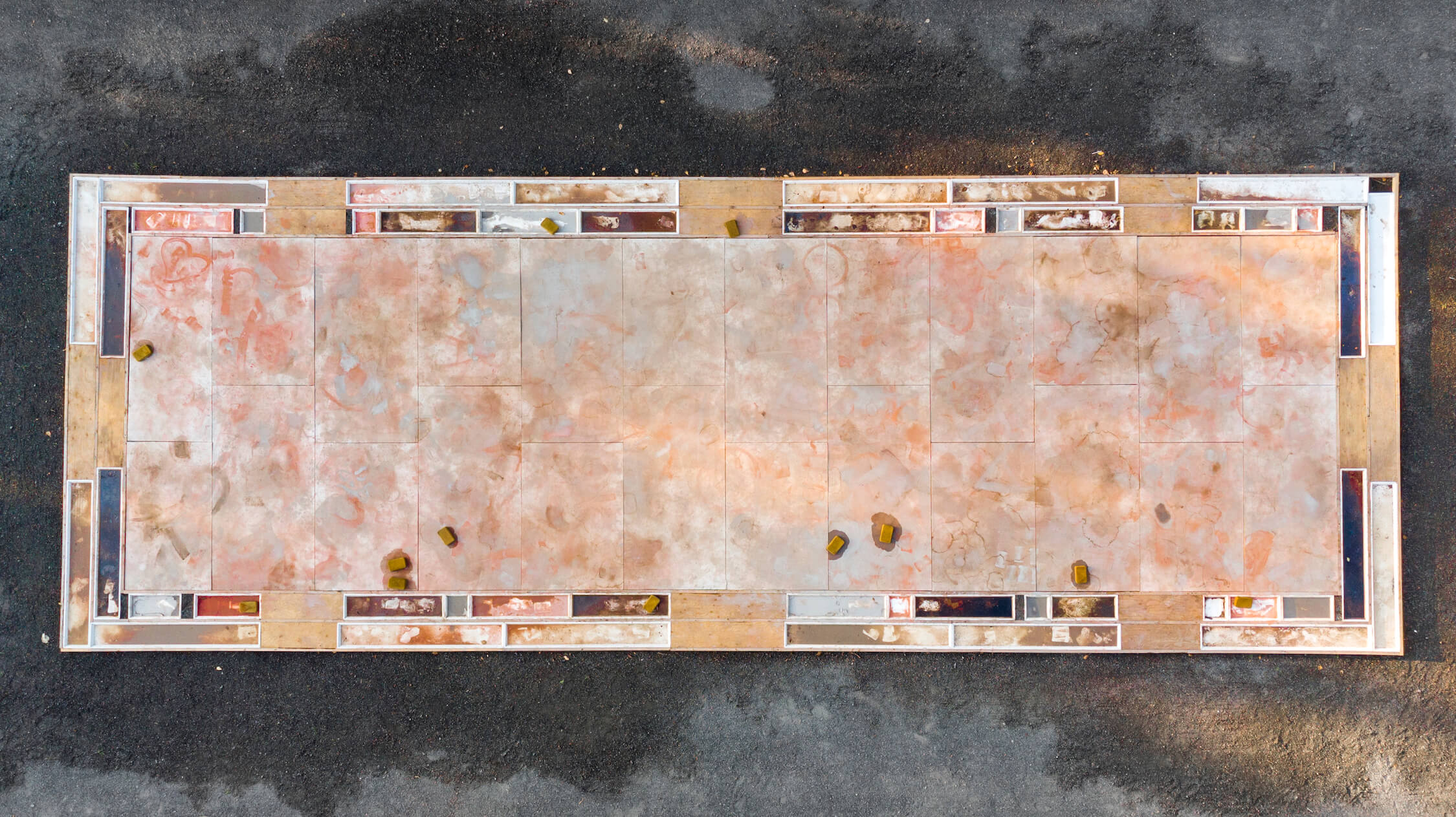 While the cumulative effect of all these installations might have provoked sensory overload, their impact is in fact the opposite. Given the size of the Festival site and the breathing room allotted to each design, the installations work effectively both as stand-alone meditations and as individual elements of a larger, grander scheme, much like the plantings in a natural garden. 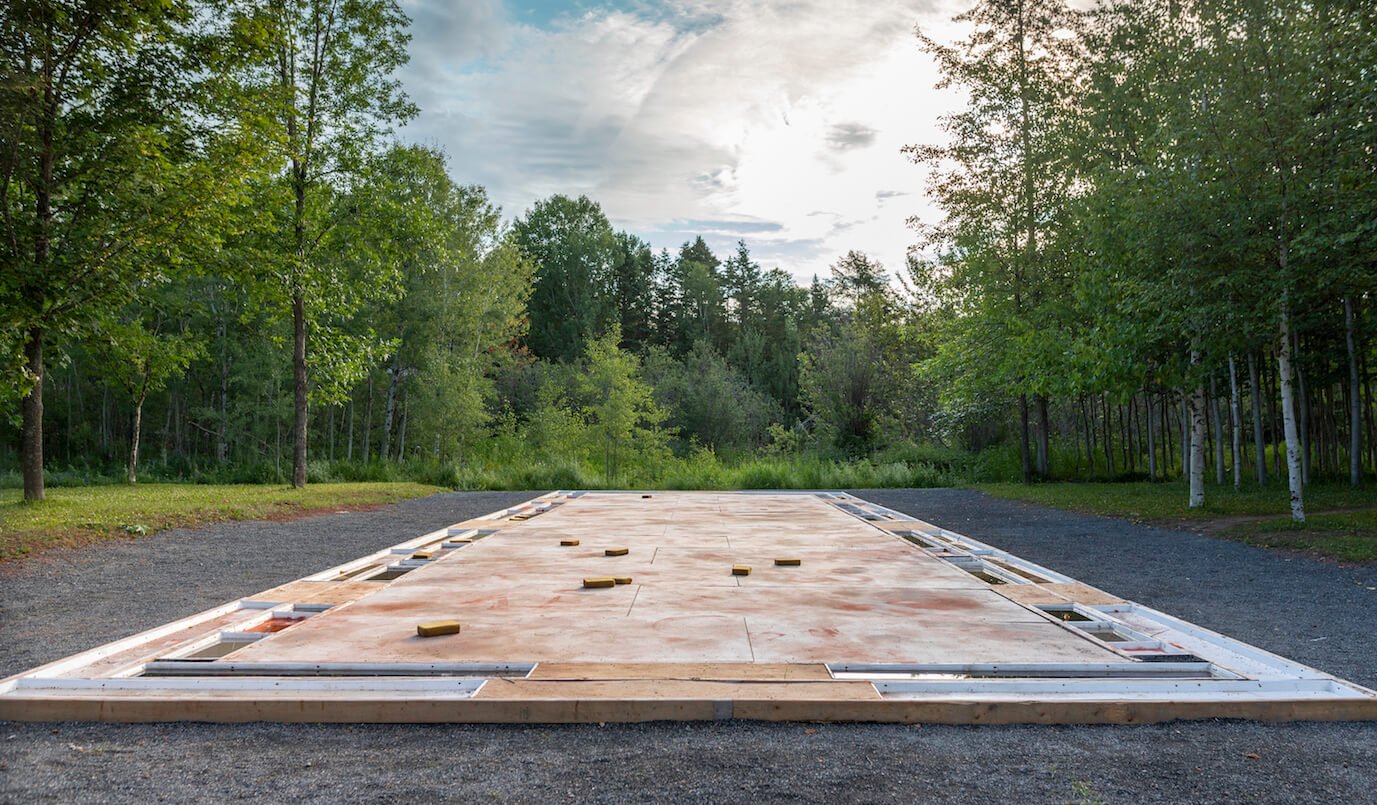 The reinterpretation of landscapes both natural and manufactured was one of the reactions that the International Garden Festival was founded 20 years ago to inspire in visitors. On that score, it has succeeded admirably, offering more than just a pleasant outing on the south shore of the St. Lawrence River, but also a vital forum – likely to become even more so over the next two decades – on our increasingly urgent relationship with nature.