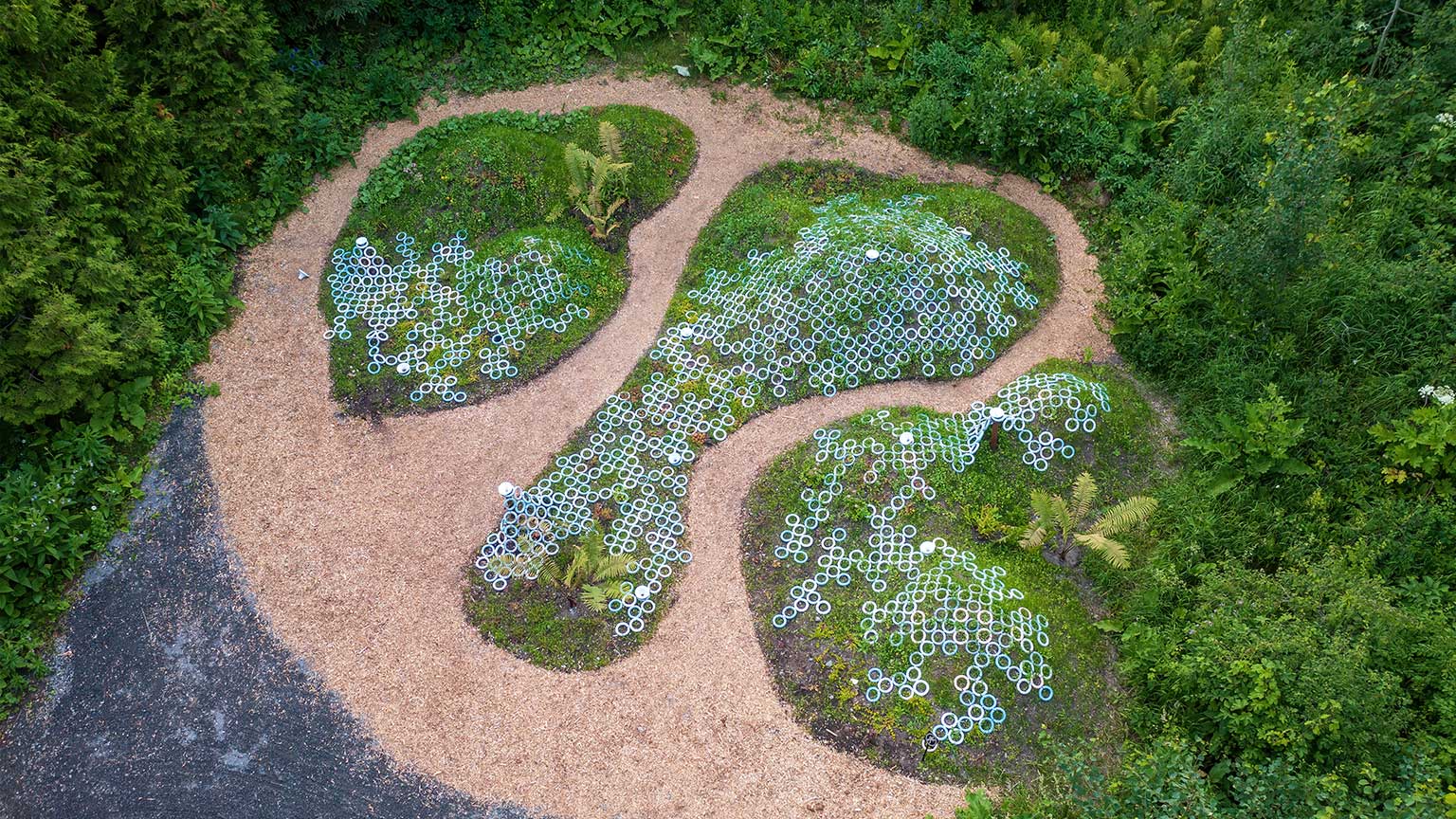 The International Garden Festival 2022 Is a Lesson In Wilderness Survival

Responding to the theme of “adaptation and resilience,” five temporary landscape installations highlight nature’s ability to educate and inspire.

Many folk tales feature some sort of enchanted forest that helps a character to grow, transform or learn an important moral. For the past 23 years, that same balance of awe and enlightenment has also defined the International Garden Festival, held at the Reford Gardens (also known as the Jardins de Métis) in Grand-Métis, Quebec, some 300 kilometres northeast of Quebec City.

Each summer, the festival taps into the mystical power of its woodland surroundings by launching a series of site-specific landscape installations. (As an added draw, these temporary attractions sit just a stone’s throw away from the Reford’s collection of permanent gardens, developed by horticulturist Elsie Reford between 1926 and 1958 and featuring over 3,000 plant species.)

The 2022 edition of the festival introduces five new designs that all respond to the theme of “adaptation and resilience.” While the installations make for rich visual spectacles — with a cloud of suspended white orbs waiting in one clearing, and a sea of earthenware rings spread across another — they also serve as modern-day parables about survival.

Credit for the festival’s balance of Instagram appeal and impactful nuance goes to its 2022 team of 12 designers, who represent a cross-disciplinary mix of architects, urban planners and landscape designers from Canada, France and the United States.

Here is a look at all five of their fantastical creations on view at the International Garden Festival 2022. 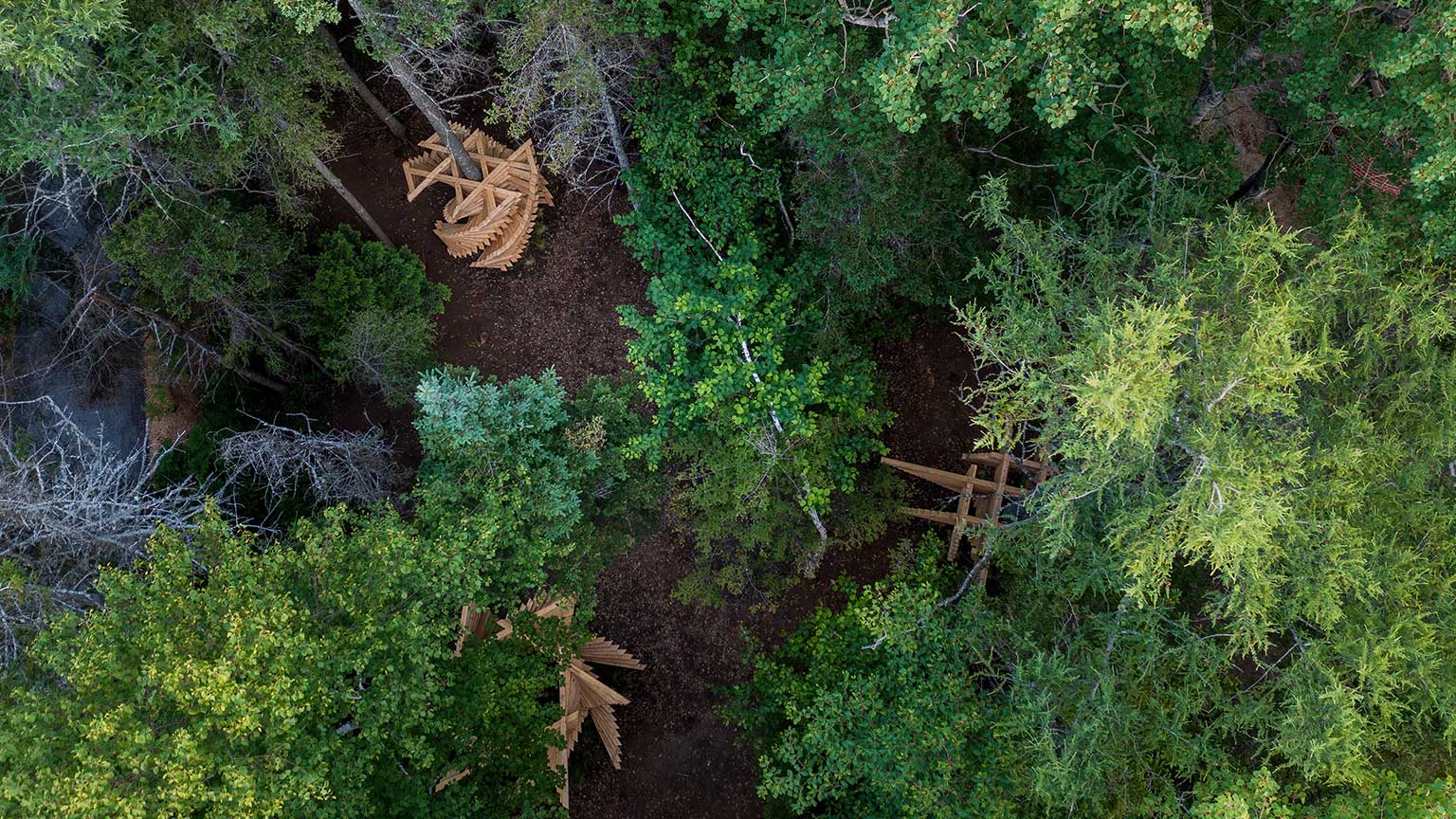 Short of chaining yourself to a tree trunk, it can be difficult to adequately safeguard a forest from logging and development. To draw attention to these human threats, Montreal design studio Maison029 has imagined a series of sculptural tree enclosures built out of criss-crossed lumber. 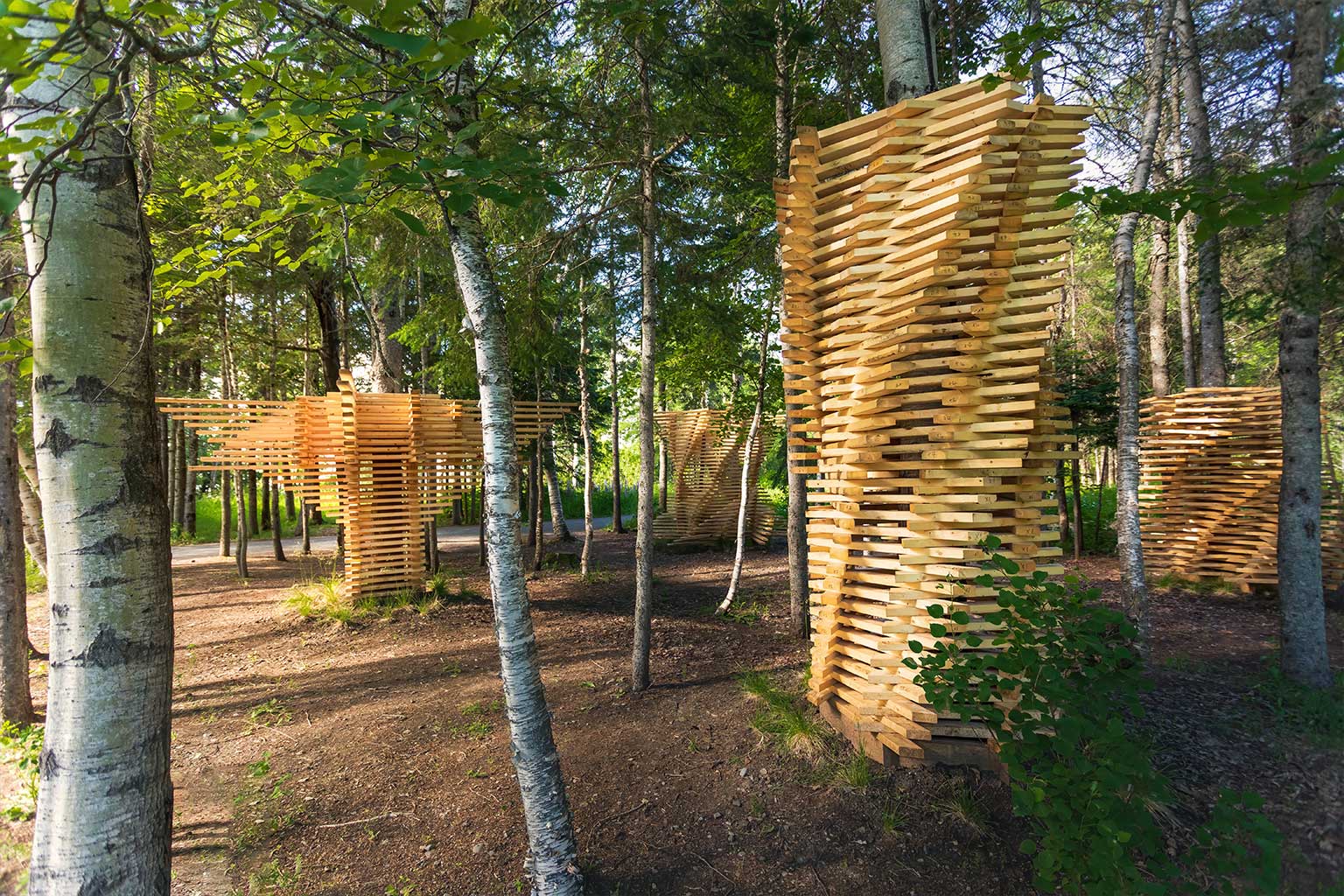 Each symbolic shield is bespoke-tailored to the arbor it protects. Many bear some resemblance to other elements of nature — one looks like a bird with outstretched wings, while another twists and turns like a cyclone. Our takeaway: individual trees may not always be able to protect themselves, but that doesn’t mean nature won’t eventually strike back against human threats. 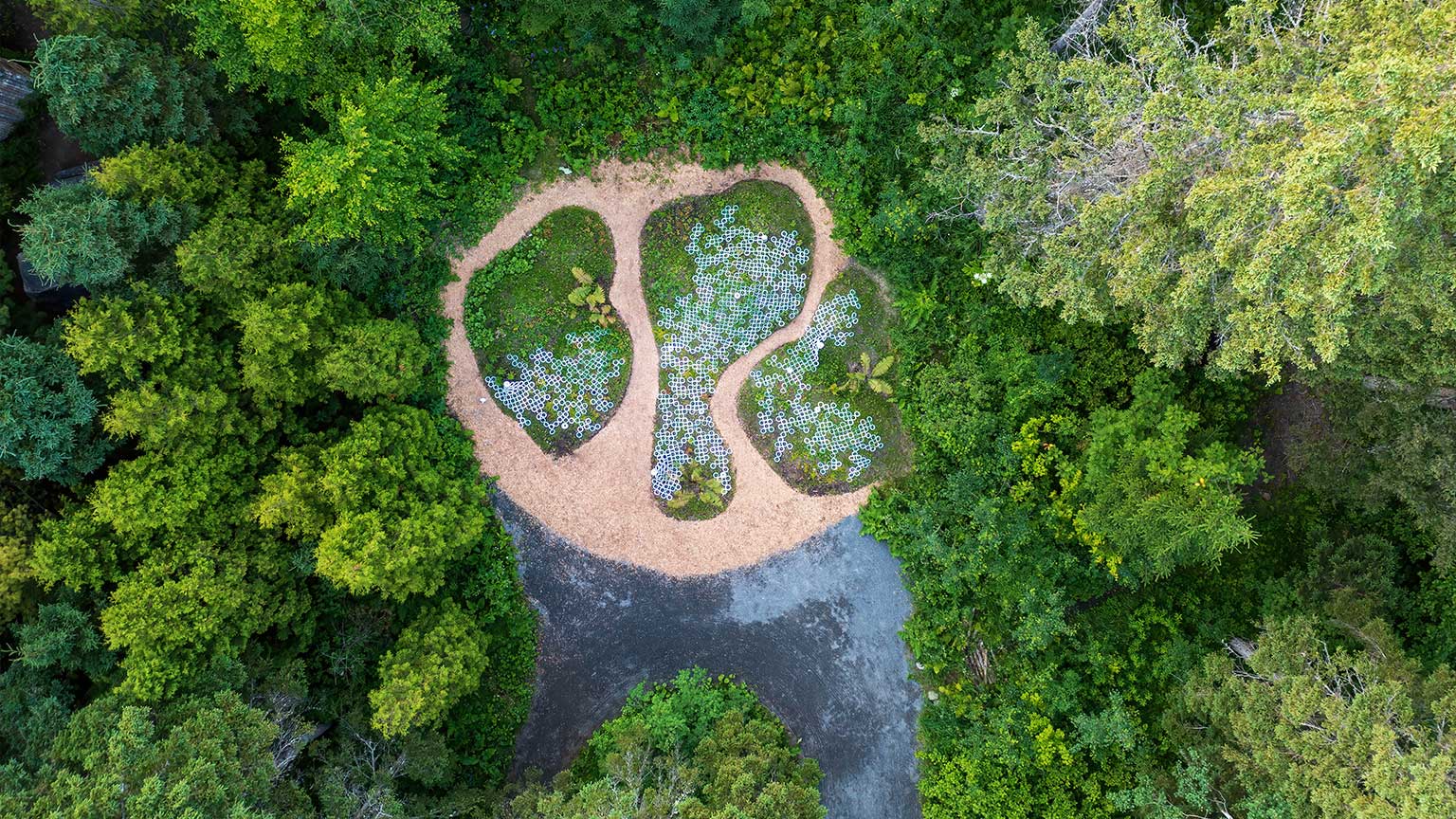 Last week saw the first full trailer for The Lord of the Rings: The Rings of Power debut online — and the early consensus seems to be that, if nothing else, the show will feature beautiful scenery. Fans of Tolkien’s lush Middle Earth landscapes may find themselves similarly charmed by this ring-based installation by Marie-Pier Gauthier-Manes, Chloé Isaac, Victor Roussel, who met while studying environmental design at the Université du Québec à Montréal. 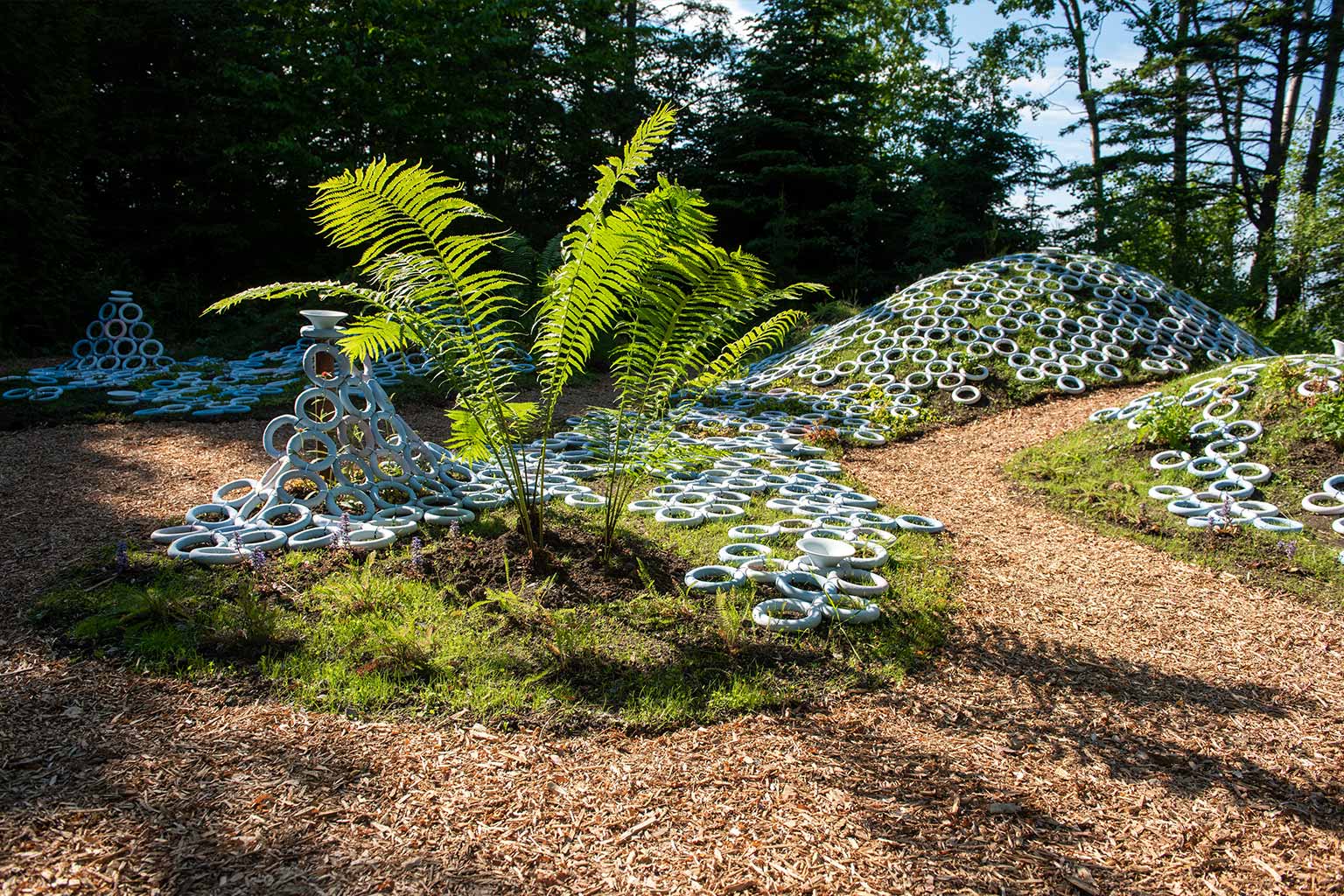 Fired onsite in an outdoor kiln, 1,200 hand-made earthenware rings are joined together into a kind of ceramic net modelled after a bed of lichen. Thanks to the thermochromic properties of their material, these magical rings will change colour throughout the season to reflect subtle shifts in their environment. Meanwhile, the earthenware’s water retention capabilities will also help to improve the site’s irrigation. Rings of power indeed. 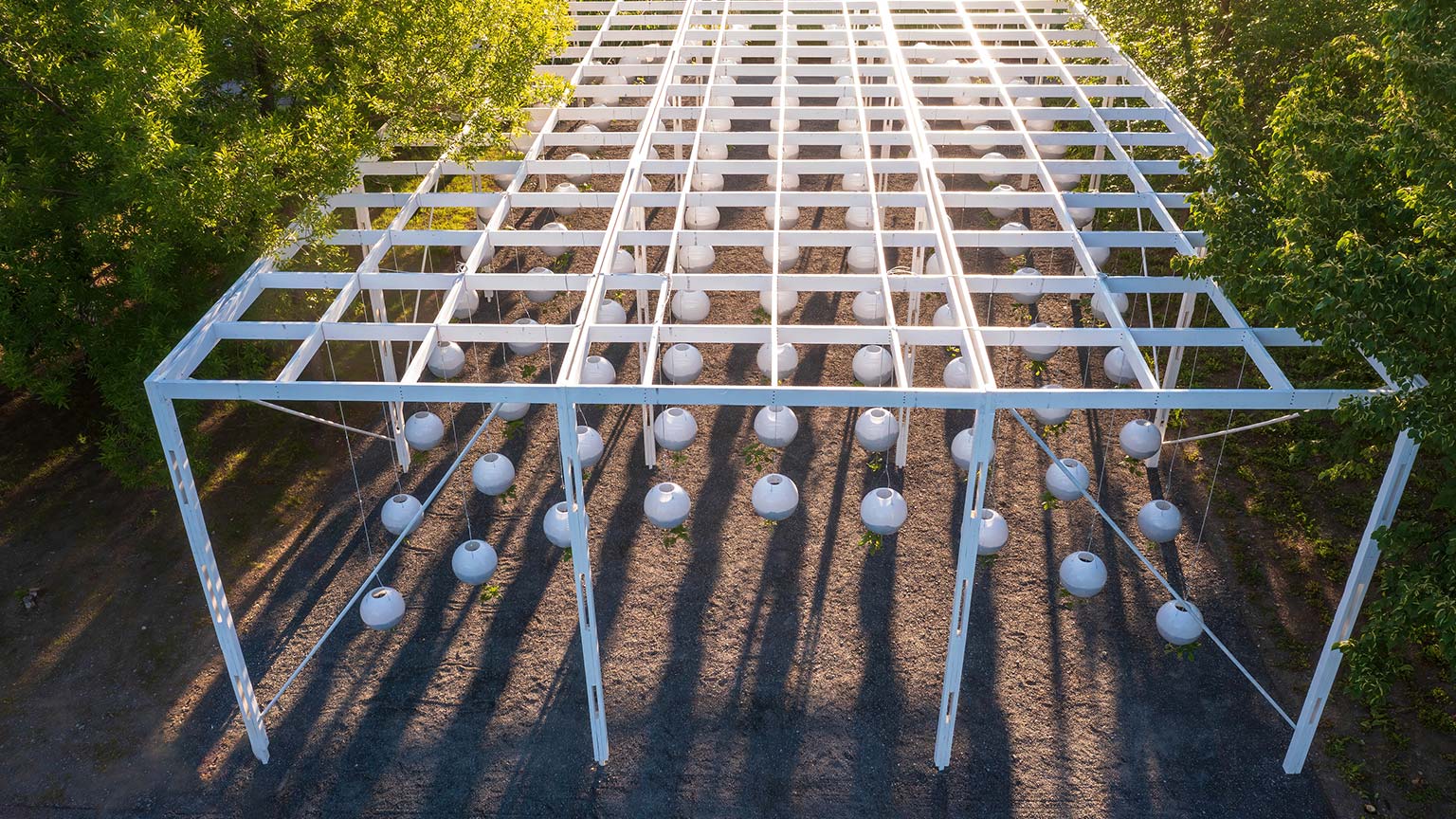 Shifting temperatures and altered weather patterns mean that many plants will soon find themselves forced to adapt to entirely new habitats. Reflecting on climate change’s ability to turn existing site conditions upside-down, a trio of employees from New York landscape firm Terrain Work have hung a series of orb-shaped planters in a field of white structural framing. 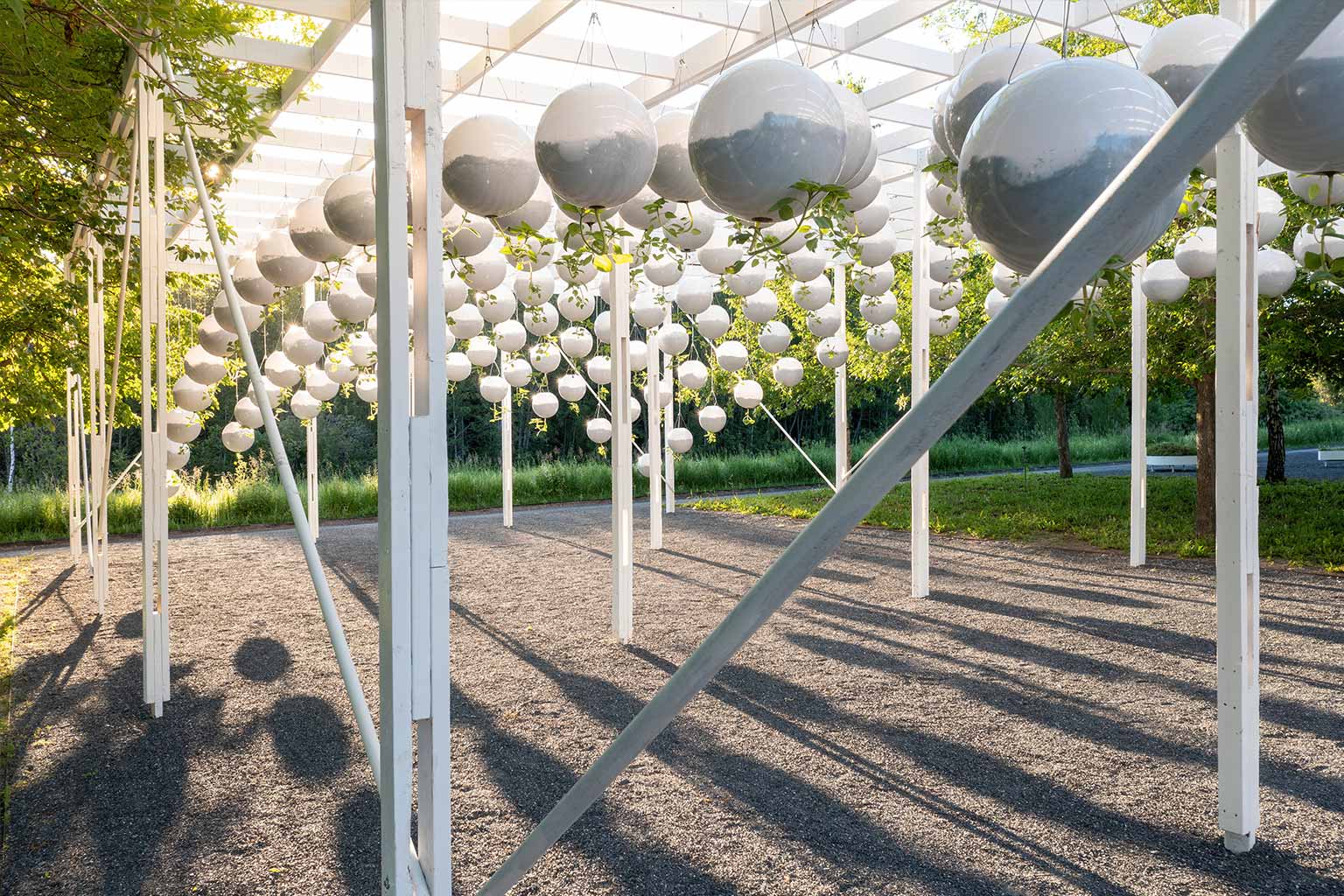 Each planter contains a sunflower that will gradually bend its way upwards towards the sun, creating an impressive demonstration of the extreme lengths that plants go to in their simple quest to grow. 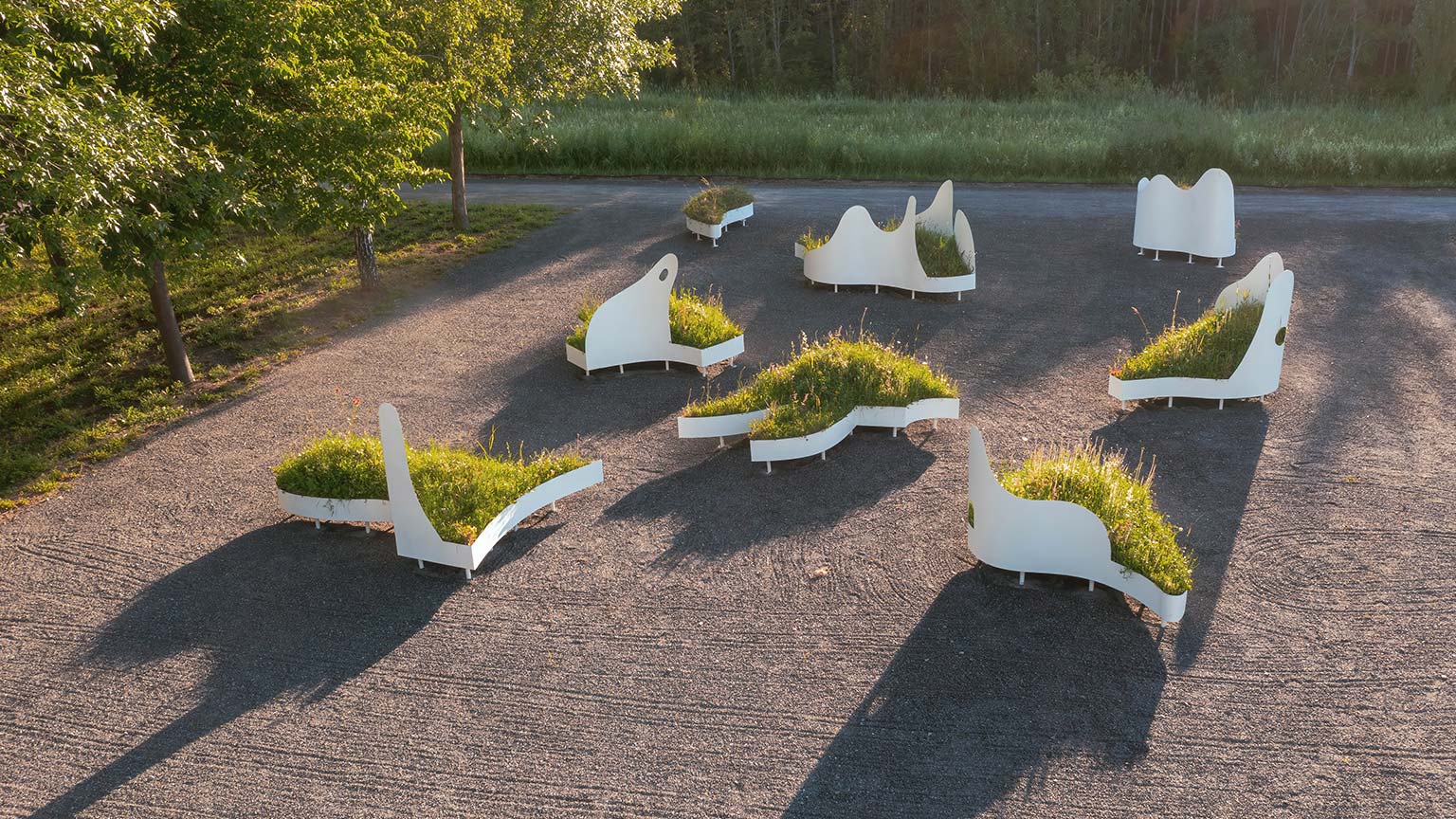 Composed of eight sinuous planters, this installation breaks nature down into a series of scattered puzzle pieces to highlight the many different interactions that define a successful ecosystem. 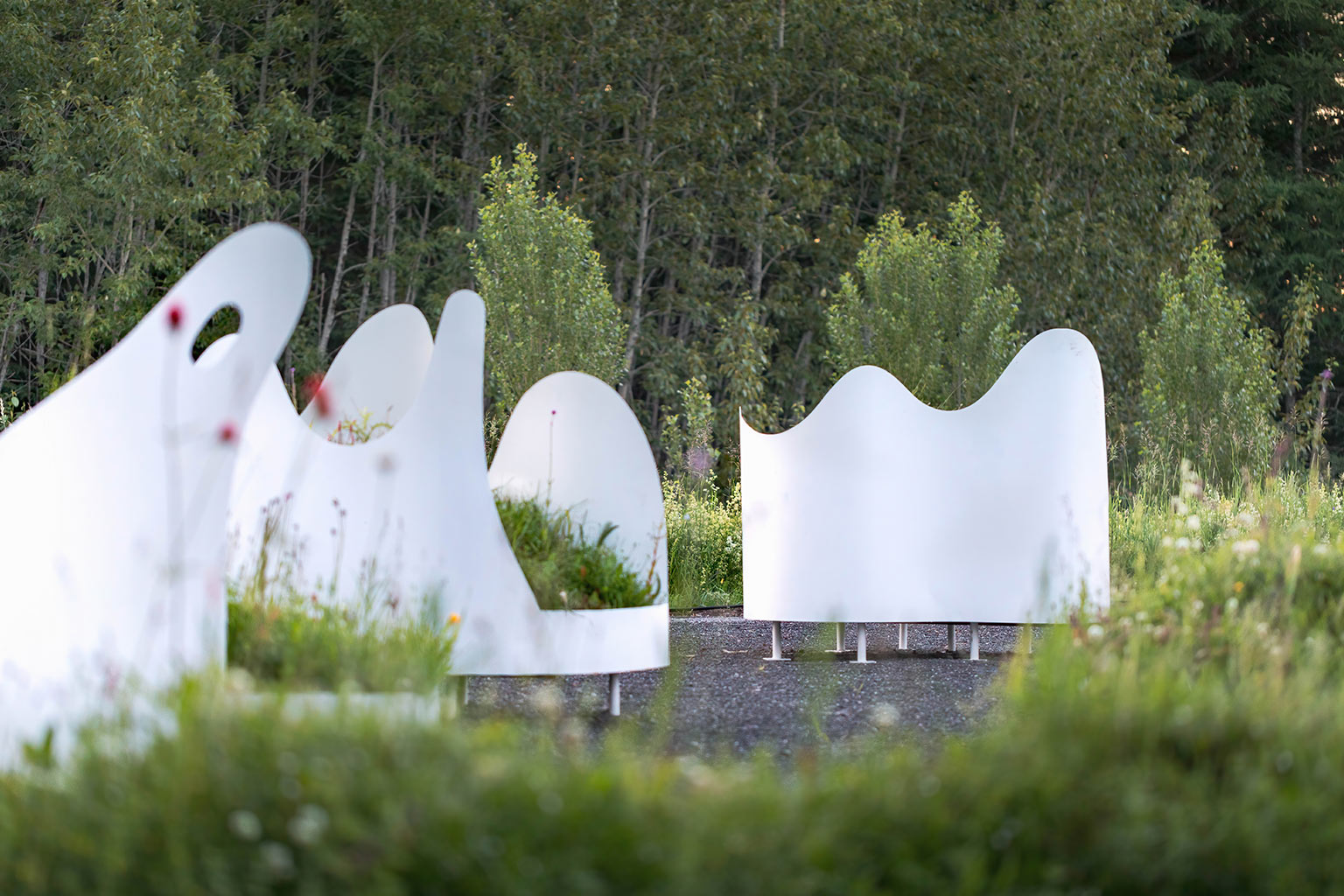 Each planter acts as its own miniature micro-hill, but can also function as human seating. The dual-purposed concept is designed by onomiau, a Paris-based design collective started by Noël Picaper. 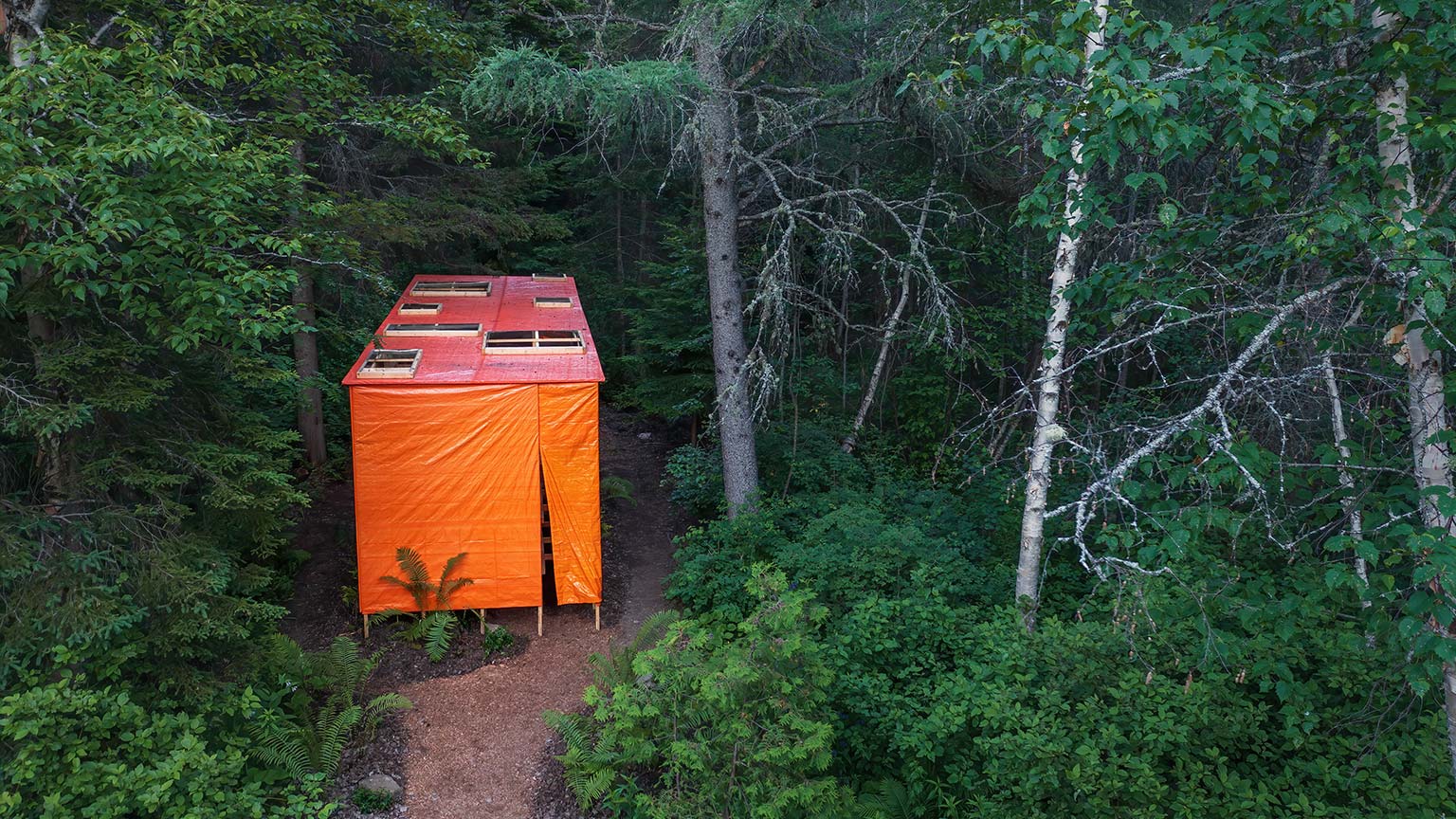 Installed as a roadblock in the middle of a forest trail, this bright orange hut requires hikers to slip under its tarpaulin shell to continue along their route. Once inside, they enter a somewhat maze-like space that frames a narrow path forwards while also offering views upwards through a series of skylights. 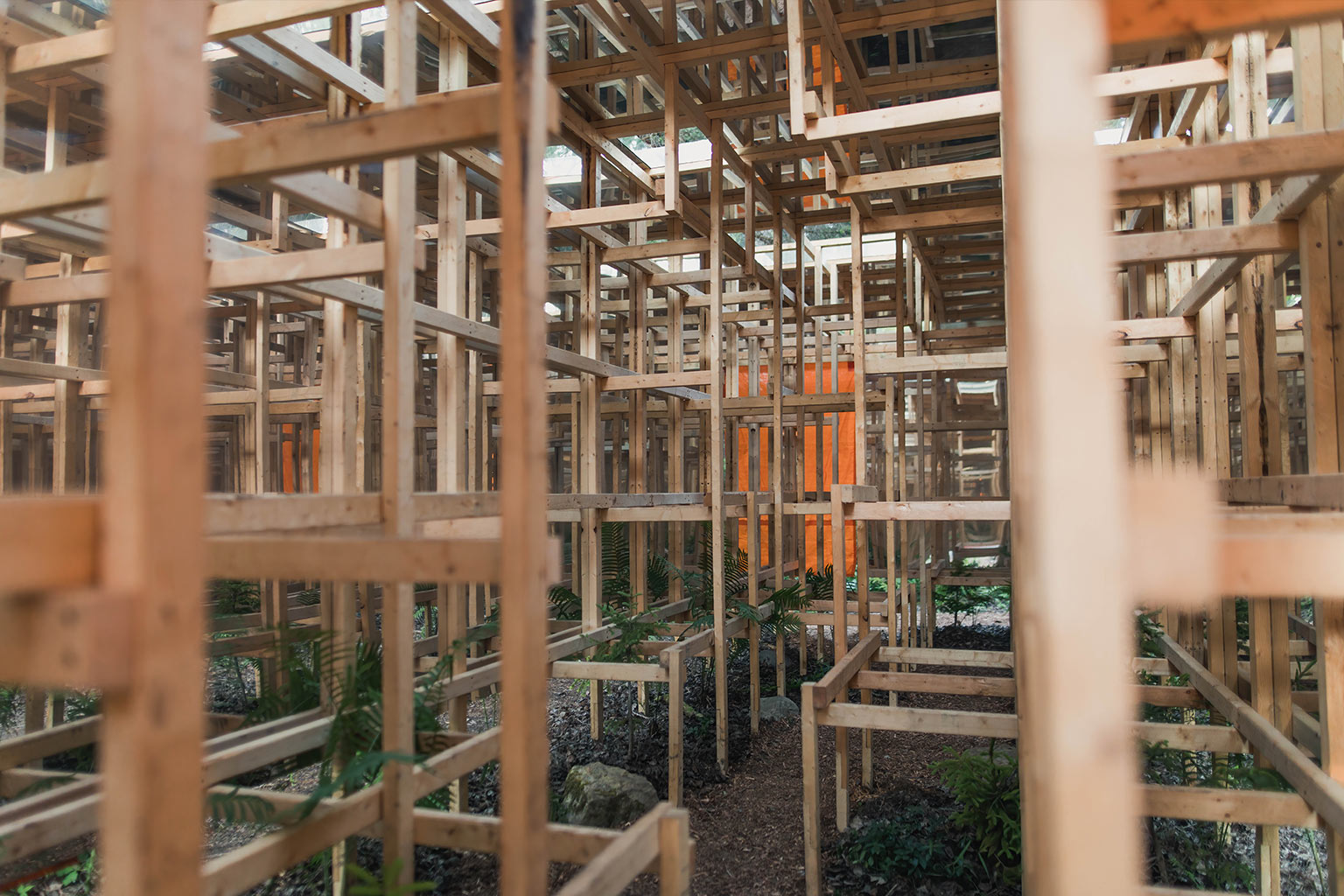 Through this combination of compressed and open vantage points, designers Antonin Boulanger Cartier, Pierre-Olivier Demeule, and Melaine Niget use the International Garden Festival 2022 to explore an interesting question: is it still possible to achieve infinite architectural outcomes with a limited resource? Mass-timber advocates would say yes — so long as we harvest the material responsibly. If not, we might find our next trip to the woods thwarted by unanticipated obstacles.

Responding to the theme of “adaptation and resilience,” five temporary landscape installations highlight nature’s ability to educate and inspire.