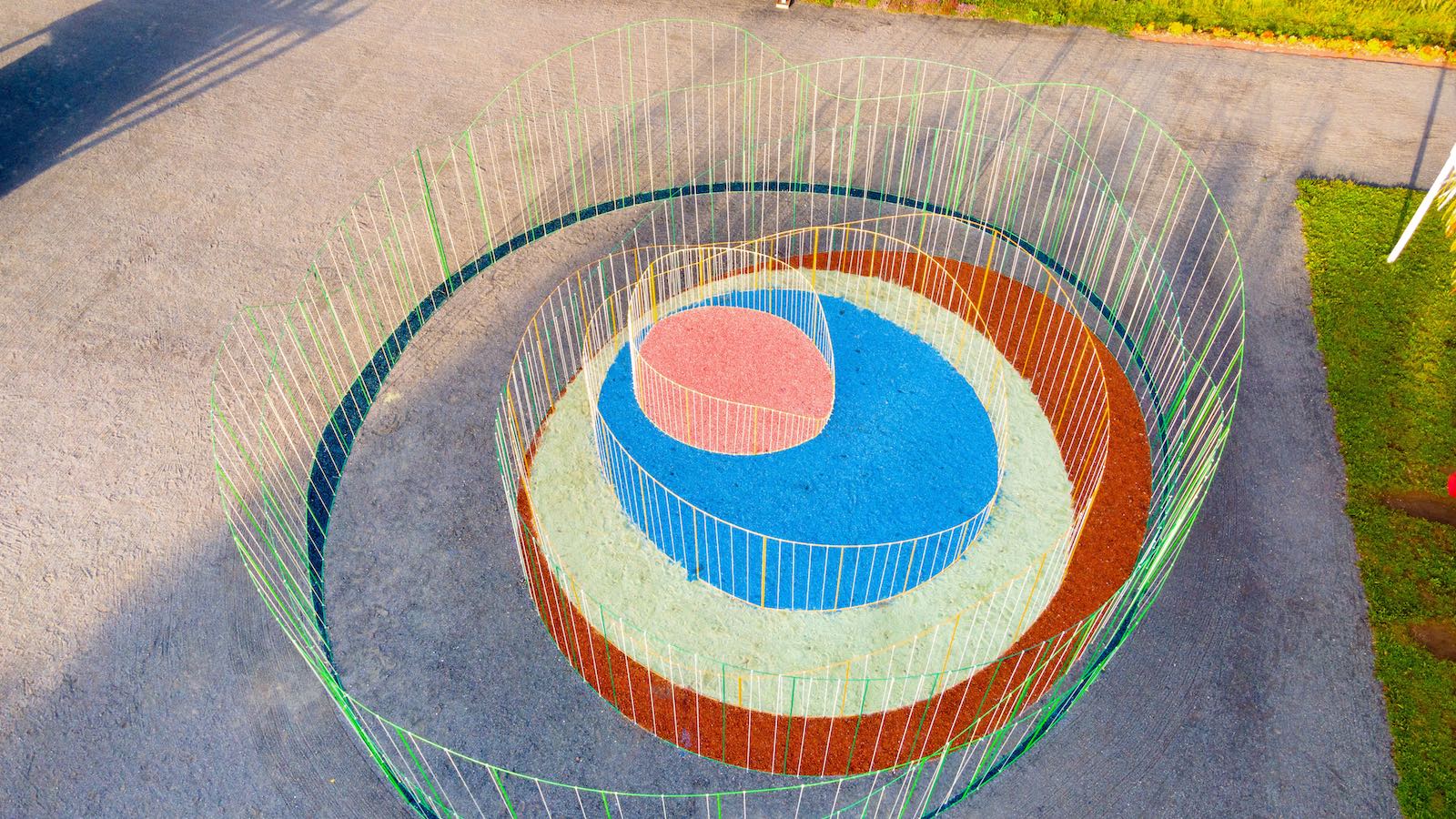 New installations include a carpet of colourful ropes by a trio from South Korea and a vibrant kinetic enclosure atop a Quebec City museum.

Over the past six months, the COVID-19 pandemic has forced cultural institutions of all kinds to fulfill their mandates and serve their constituencies in new and unusual ways. Art and history museums, for instance, have staged virtual exhibitions, facility tours and artist talks aplenty, while digital pivots by theatre companies the world over have included live-streaming new plays in limited runs that mimic those in physical theatres.

But how does a garden festival — which is literally rooted in terra firma — adapt? In the case of the International Garden Festival at Quebec’s Jardins de Métis, this year’s installations were still built as intended at the vast Gaspésie site, but via specs provided remotely by necessarily absent designers. The festival also took its show on the road, installing new or updated projects in the province’s two largest cities. 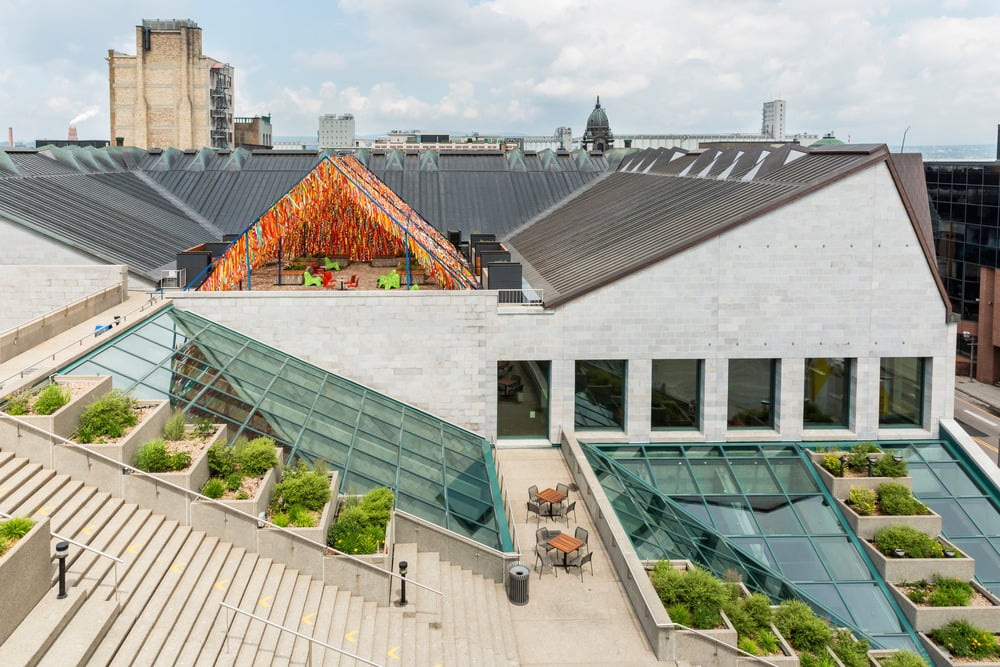 In the provincial capital, the latest incarnation of Buffalo, New York-based Canadian designers Julia Jamrozik and Coryn Kempster’s Roof Line Garden was once again planted atop the Musée de la civilisation. Defined by a fluttering, multicoloured canopy composed of bright strips of barricade tape, this year’s Roof Line follows two previous versions on the Quebec City institution’s rooftop terrace and an original one at the Jardins de Métis, also known as Reford Gardens (where the design was installed as Line Garden). 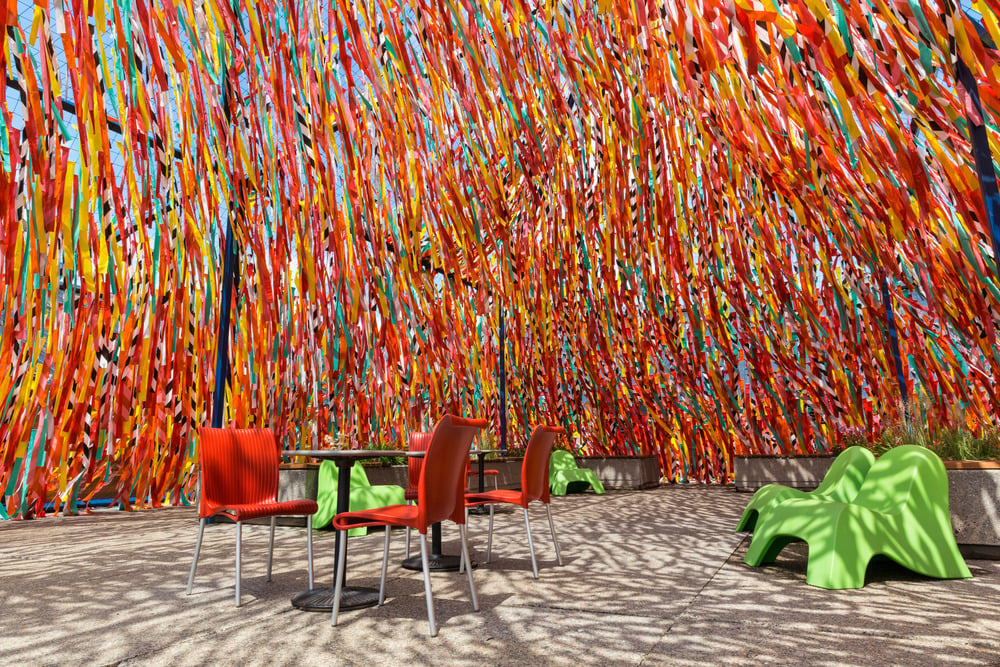 The vibrant orange, red and yellow strips of the current installation (in situ until October 3) are punctuated by black and white ribbons, the colours inspired by a fishing fly once used by legendary Reford Gardens proprietress Elsie Reford, whose fishing accessories had been on display in the museum’s just-closed exhibition Fishing Stories.

In Montreal, meanwhile, a dry garden-cum-open-air theatre by Mégan Dorigo, Aurélie Martel, Audrey Sambeau and Mireille Simard (all of them event-design graduates of the Université du Québec à Montréal) has been installed next to the city’s Saint-Laurent metro station, where it will sit until the end of October. 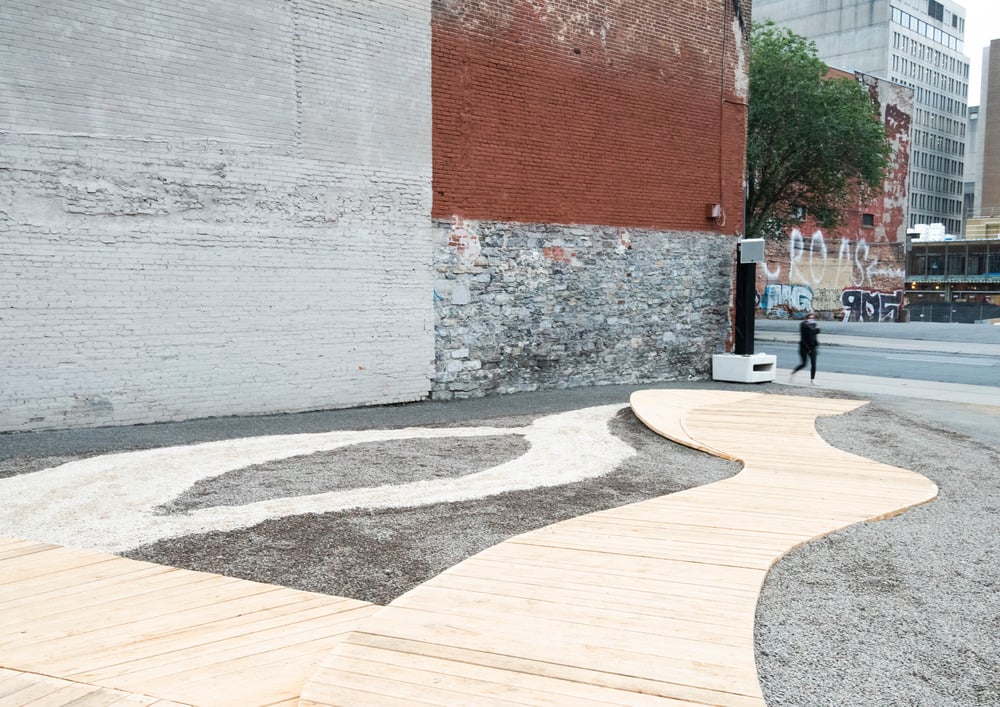 Called Ressac, the Montreal installation is a collaboration between the university, the festival and the Partenariat du Quartier des spectacles (PQDS). Its dry garden, which abuts a brick wall, is bisected by a light-coloured wooden footbridge “reminiscent of driftwood.” The sinuous layout evokes the mouth of the Mitis River, on which the Jardins de Métis sit. 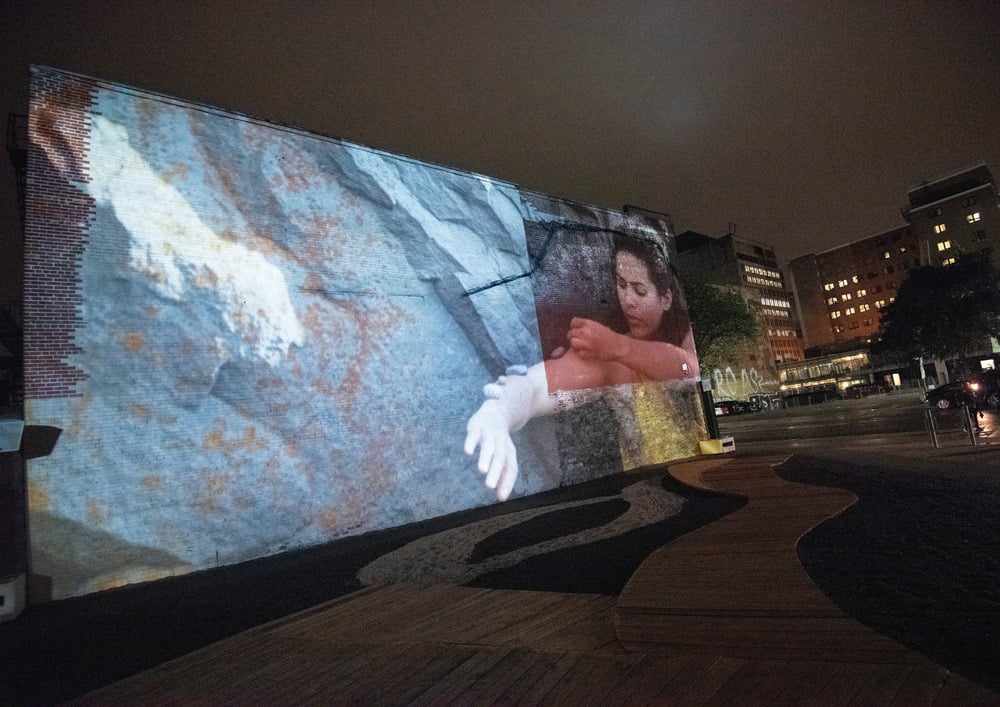 After dark, a film featuring dancer Ivanie Aubin-Malo is projected onto the brick wall, her movements intended to transport viewers, in this year of lockdowns and immobility, beyond physical limits “by initiating a conversation between body and [the nearby Saint Lawrence] river,” personified by Aubin-Malo’s fluidity.

Blending disciplines in such a way “enriches and excites, creating new opportunities for exploration,” the festival’s organizers say of the 2020 program as a whole, which this year is on view until October 2 and has métissages (or crossbreeding) as its theme. 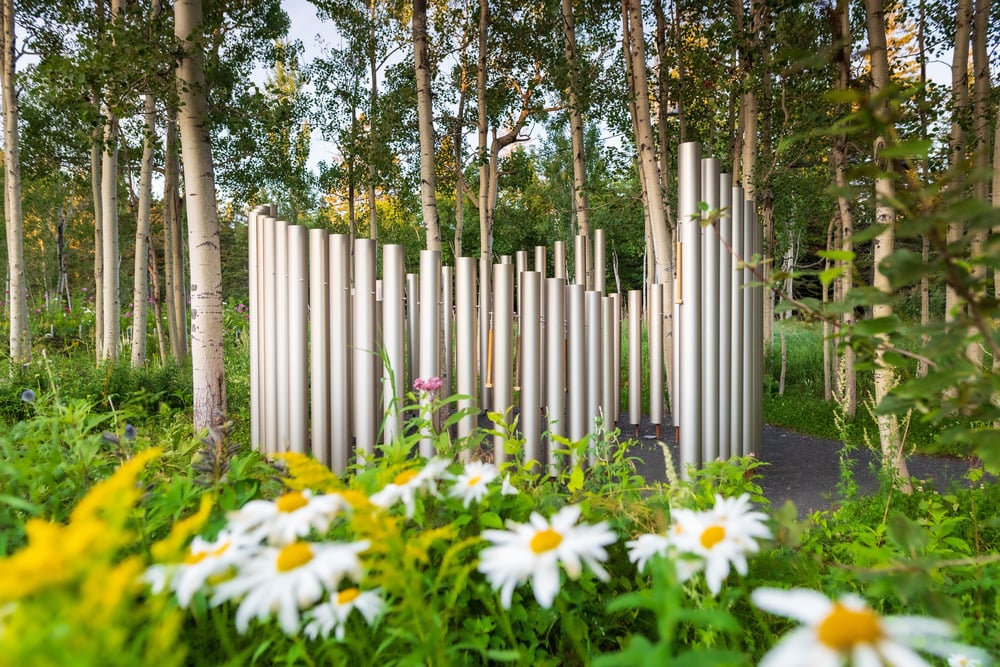 The approach is reflected in the installations at Reford Gardens proper in a wide-ranging fashion. Corps de resonance, a tree-shrouded musical folly, prompts passersby to move in and around a giant instrument “that comes to life in the playing, vibrating along with the sounds of the forest.” It’s the work of a Montreal-based team composed of designers Charlotte Barbeau and Leila Desrosiers, environmental designer Félix Roy and intern architect Jean-Benoit Trudelle. 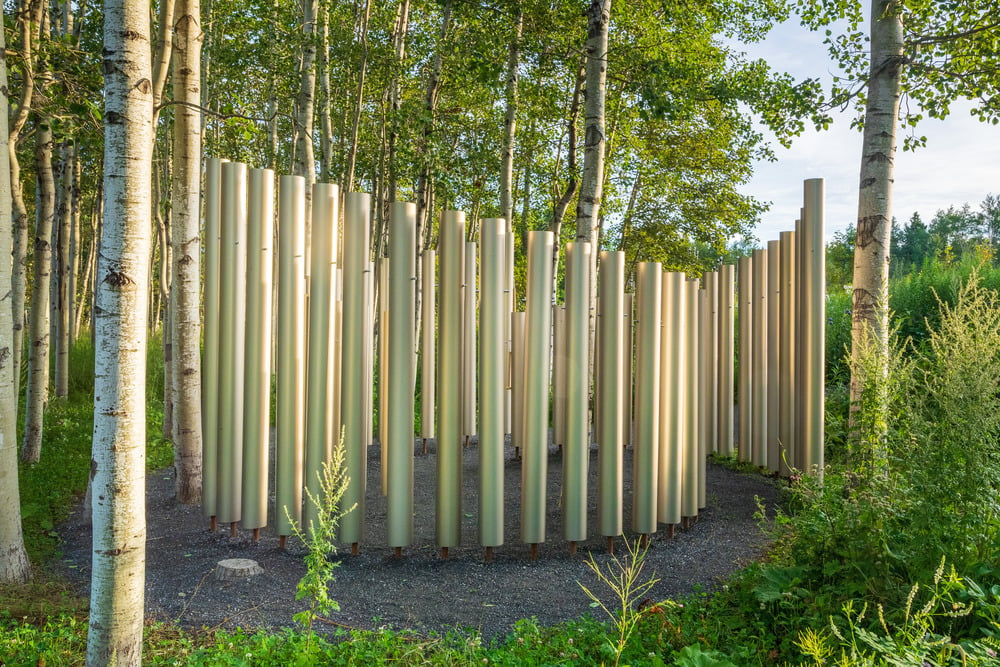 The South Korean installation Augmented Ground, meanwhile, combines the unlikely disciplines of landscaping and rope art. A carpet of colourful ropes laid tightly on sculpted terrain, the design was inspired by the traditional sash of the Métis nation and is the product of a Seoul-based trio — architects Soomeen Hahm and Jaeheon Jung and landscape architect Yumi Lee — whose oeuvre is driven by exploring cross-disciplinary harmony. 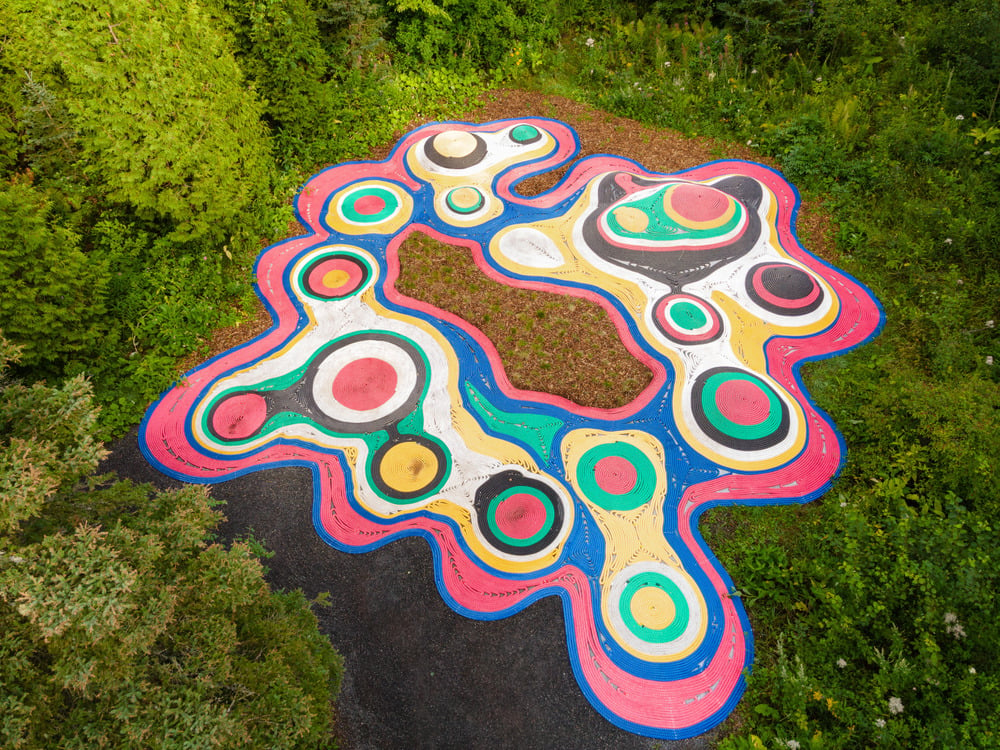 According to the festival, “they are currently focusing on ways of constructing complex forms to develop unique construction processes that cannot be done entirely by automation nor by human labour.” 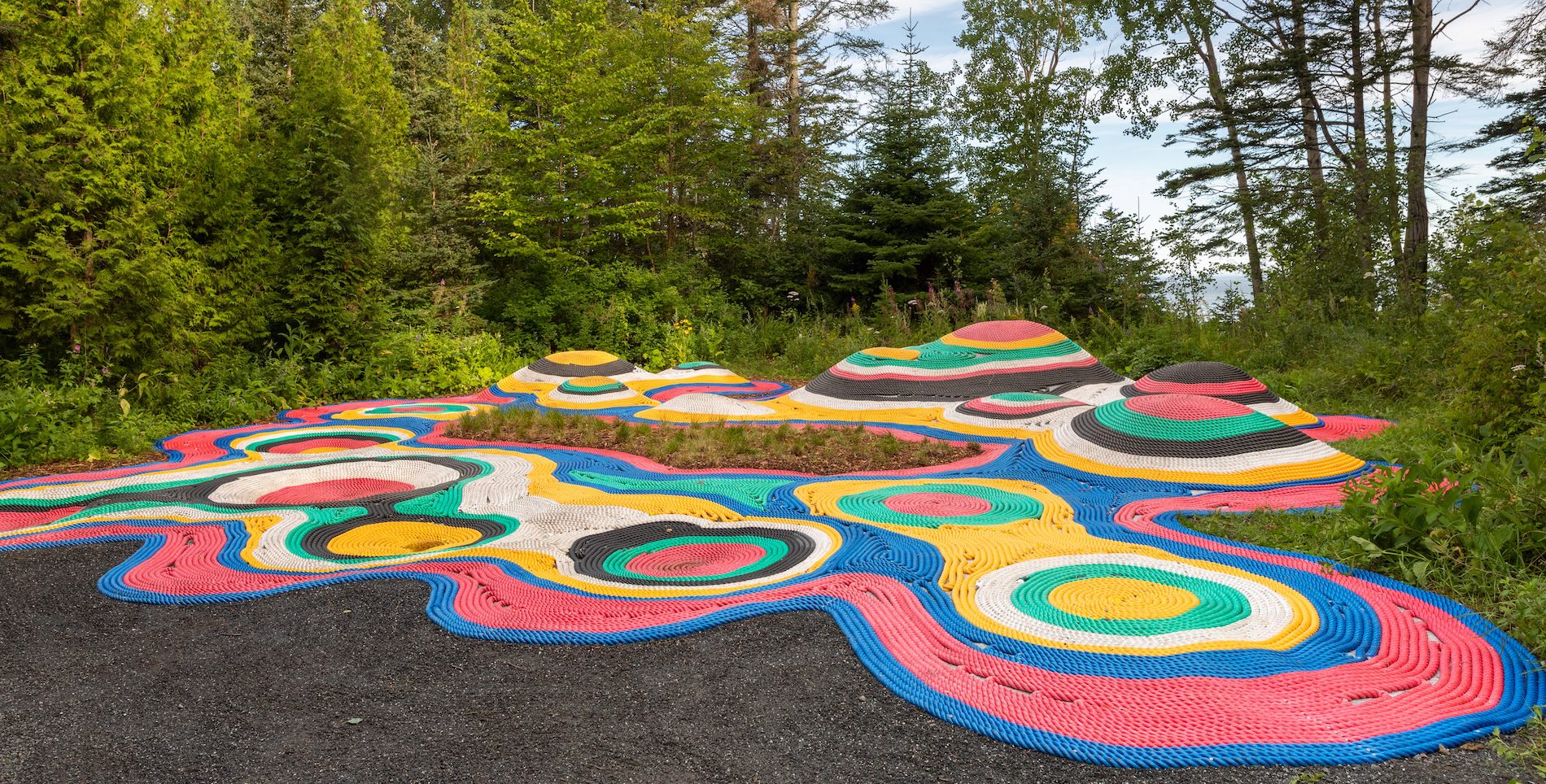 Cording and weaving, as it happens, are popular media and metaphors this year, figuring prominently in a number of the other installations. (Mé)Tissages by architect Duc Trung of France, for example, is a “woven landscape” that invites visitors “to enter through layers of coloured cords into a space created by the weaving of various elements,” while Entwine, by the landscape architects Waiyee Chou and Carlos Portillo of Toronto and Montreal respectively, “incorporates the ancient knot-tying technique of macramé to highlight the varieties of plants hybridized for horticulture.” 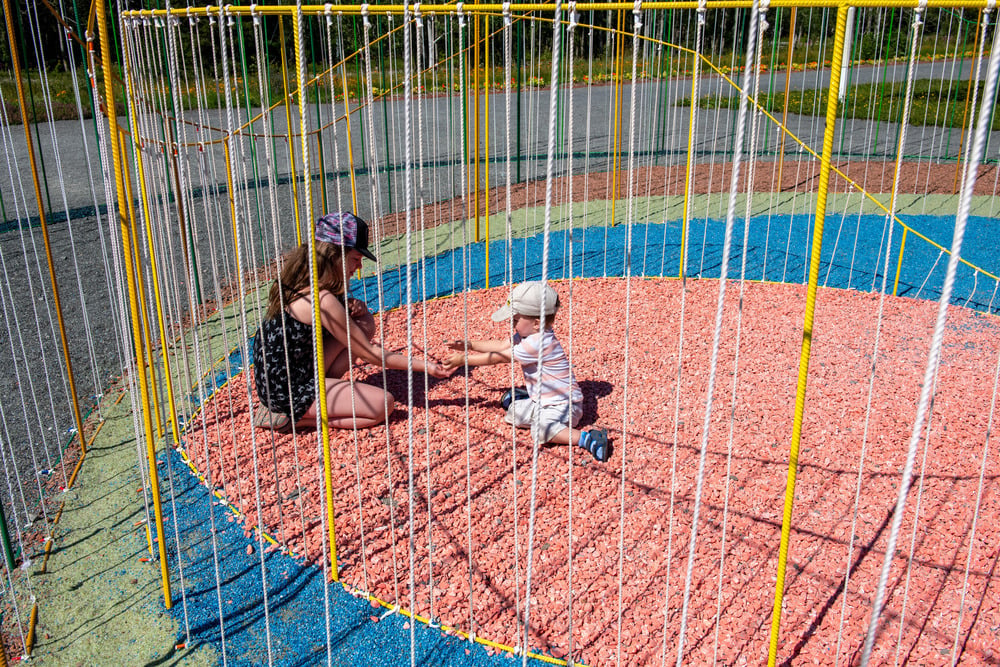 Inside the spiral that makes up Entwine, visitors are encouraged to wander between suspended vessels and even to become entwined with the structure’s cords. 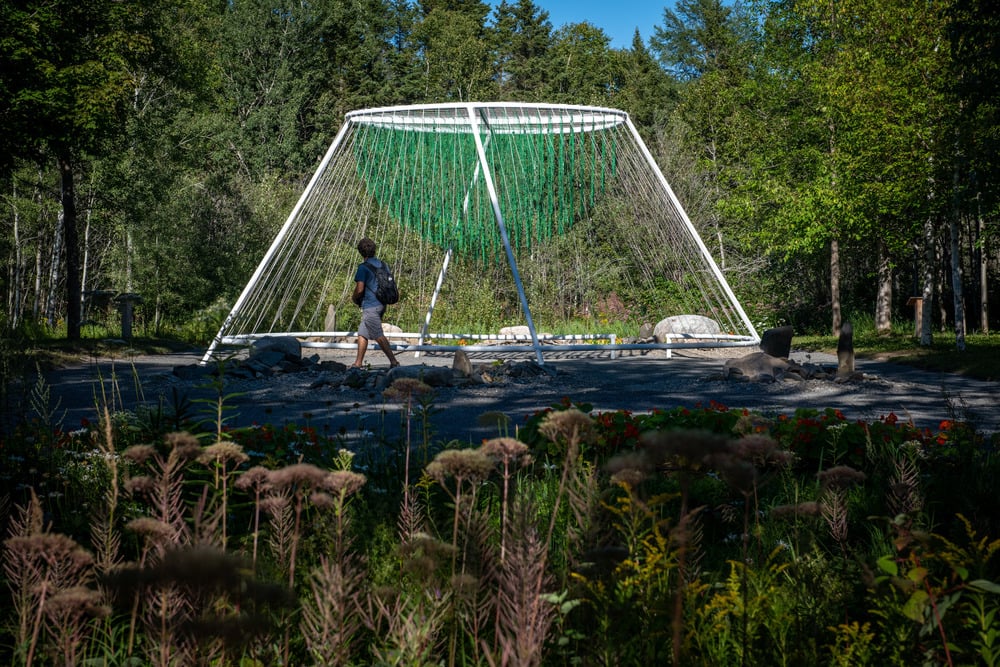 Forêt corallienne, finally, offers what is the perhaps the most overt nod to natural forms, even as it subverts them. “A coral forest of a different kind,” the installation by two Montrealers — architect Lucie Bulot and designer Dylan Collins — transplants what is normally a subaquatic landscape to the forest floor, creating a métissage of colour and form (the sculptures are made of limestone) and “a new hybrid world” in the process. 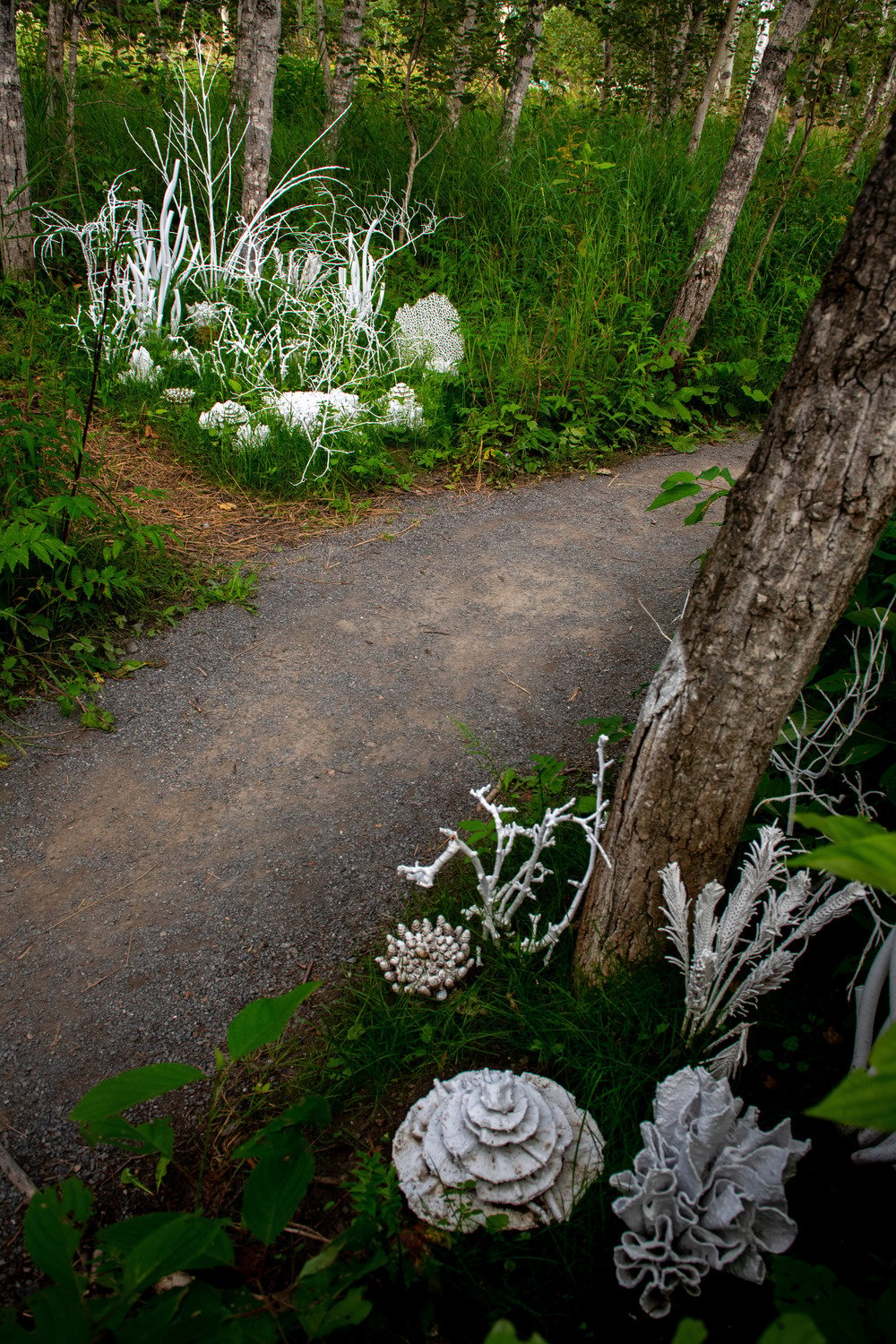 “Although the five design teams, chosen from among 200 following our international call for applications, were unable to travel to Grand-Métis [as usual] in June, the festival team nonetheless built their installations so that visitors to Reford Gardens could enjoy the métissages they had imagined,” say the organizers. 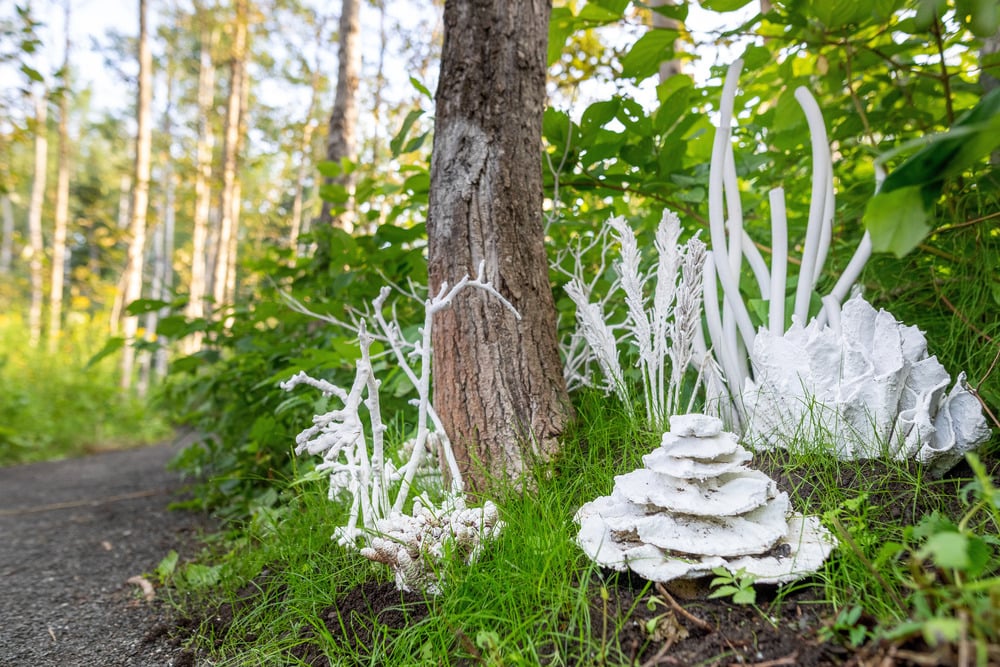 Like their fellow creators at the Montreal metro site and at the Musée de la civilisation, in other words, they were required to convey their messages remotely and in semi-blind faith, which, in a peculiar way, seems appropriate and even poetic this year.

It is, after all, what the whole world has been forced to do, to some degree or other, during these strange and unnatural times.

New installations include a carpet of colourful ropes by a trio from South Korea and a vibrant kinetic enclosure atop a Quebec City museum.