8 Inventive Pop-Up Shop Designs
The temporality of pop-up shops doesn't dissuade brands from tapping designers and architects to create wildly imaginative retail environments that are often more inspired than permanent stores. These are eight of our favourite pop-up shop designs. 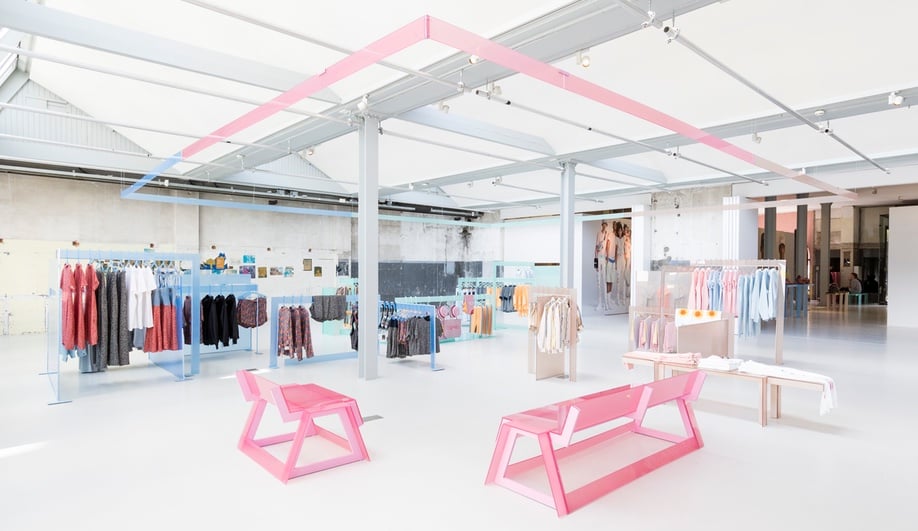 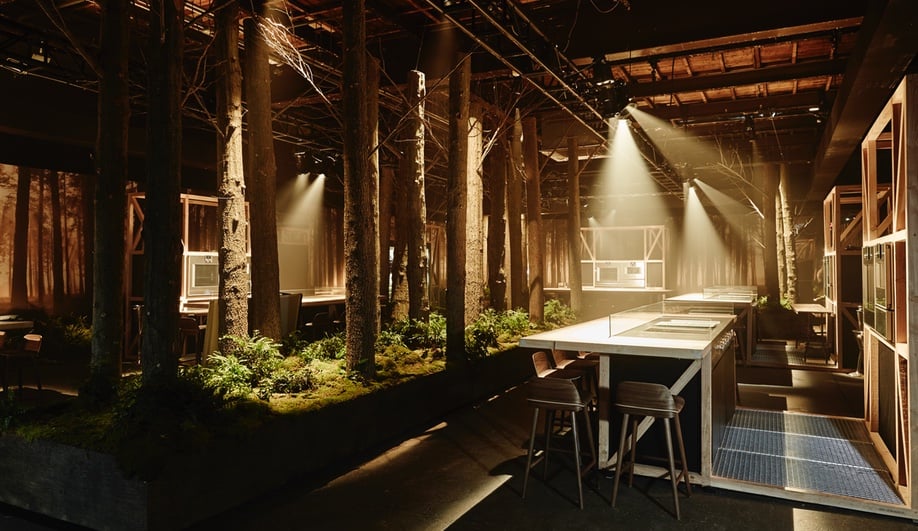 Restaurant 1683 by einszu33, in New York
Home appliance manufacturer Gaggenau celebrated the 333rd anniversary of its founding in 2016. To celebrate the milestone, the company is running a three-year campaign of special events, which kicked off in September with an immersive pop-up restaurant in NYC.

Architect Hendrik Mueller of German firm einszu33 was tapped to transform a Chelsea gallery into a mysterious environment inspired by Germany’s Black Forest, where Gaggenau was established. Mueller placed real trees, embedded in moss, in the centre of the dining room, which contained dining tables placed around timber-framed kitchens where chefs cooked in front of guest’s eyes. Adding to the believable forest setting was wallpaper emblazoned with hyper-realistic tree silhouettes and a soundtrack of waterfalls and forest creature sounds.

COS by Snarkitecture, in Los Angeles
In late 2015, for its second collaboration with COS, New York-based Snarkitecture took over a Scandinavian design store in L.A and turned it into a monochromatic pop-up shop for the clothing brand’s fall/winter collection. A floor-to-ceiling mirror divided the room in two: one half was dressed up in soft pinks, the other, restrained to white, grey and black. Steel sheets, with garment-shaped cutouts resembling paper dolls, animated both sides. 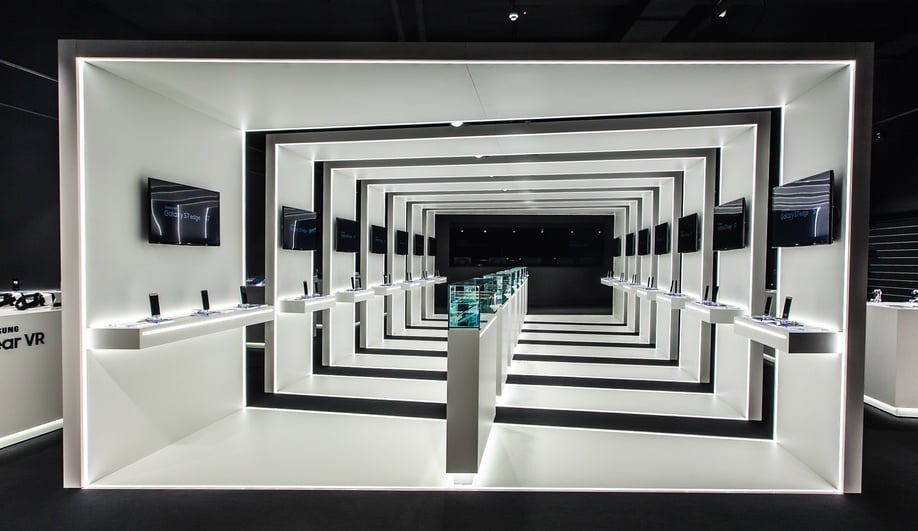 Samsung by Cheil Germany GmbH, in Frankfurt
To promote the German launch of the Samsung Galaxy S7 smartphone in February 2016, creative firm Cheil devised a futuristic-looking tunnel to lure shoppers in from the Zeil, Frankfurt’s central shopping promenade. Individual white frames with graduated widths, lined with LED strips, were assembled to form a tube that, against the all-black backdrop, resembled a set piece from 2001: A Space Odyssey. On the perimeter of the tunnel walls, the newly released phones were on display and in the centre, small aquariums let customers put the devices’ waterproofness to the test. 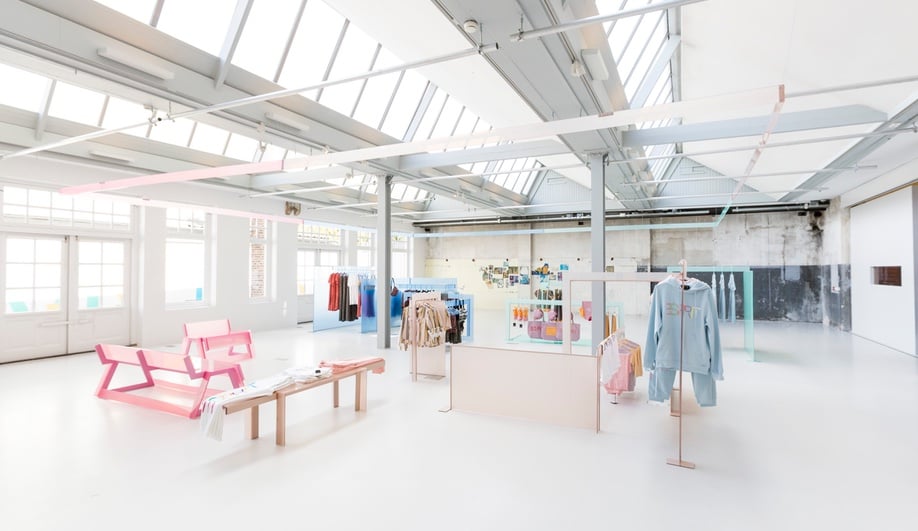 Esprit x Opening Ceremony by Noman Studio, in Amsterdam
The two fashion brands first collaborated in late 2016, on a fall/winter line that recalled Esprit’s colourful California-inspired sportswear of the 70s and 80s. A spring/summer line, featuring candy-hued items alongside kaleidoscopic prints in bold hues, was launched earlier this year, heralded by a sublime pop-up shop in Amsterdam.

Noman devised a series of cutouts and frames to display clothing on, which the firm likens to elements of a pop-up book. The units, in pastel shades of pink, blue and greens and arranged in a grid formation, are made from a type of plastic called Myst, which both absorbs light and diffuses it for an effect that’s cloudy, yet shiny. The aesthetic was a perfect complement to the slightly retro vibe of the clothing line. 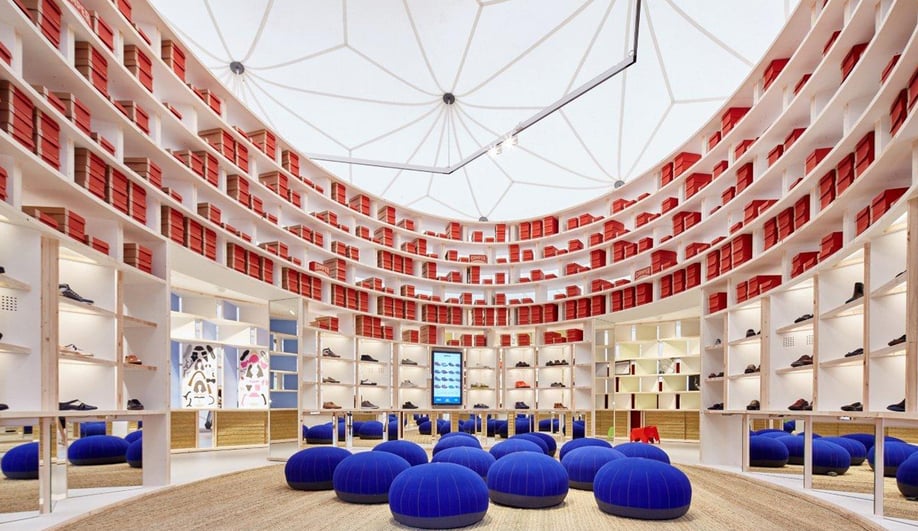 Camper x Vitra Design Museum by Diébédo Francis Kéré, in Weil am Rhein, Germany
The dome on the Vitra Campus, modelled after Richard Buckminster Fuller’s famous designs, was turned into a socially responsible shoe store for three months in 2015. To coincide with a Making Africa exhibit happening at the Vitra Design Museum, the furniture manufacturer hosted a Camper pop-up that displayed footwear from a United Nations-sponsored Ethical Fashion Initiative, as well as from the brand’s fall/winter 2015-16 collection.

Architect Diébédo Francis Kéré was the mastermind behind the dome’s reimagining as a merchandise display. He created a series of circular towers, arranged as a ring within a ring within a ring, that displayed not only shoes, but the process of shoemaking and an interactive measurement tool. Red boxes and bright blue poufs offered a striking contrast to the white and wood display system. 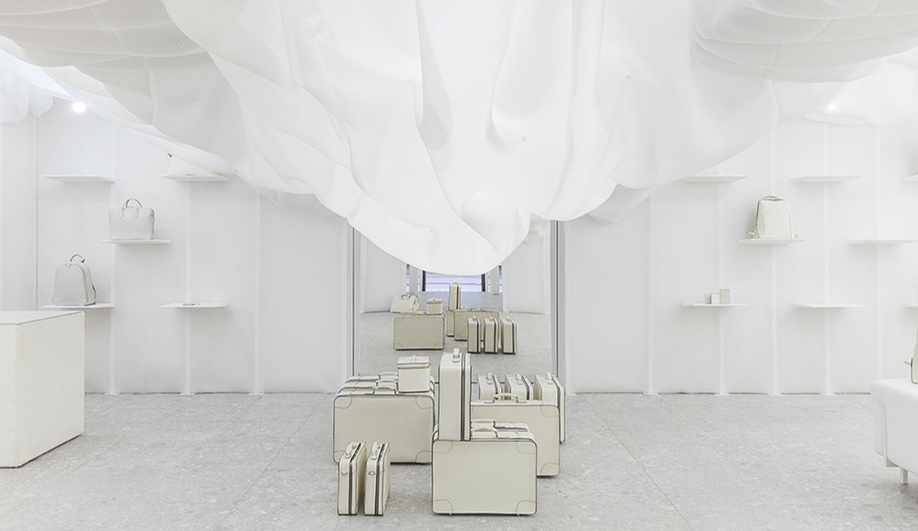 Valextra by Snarkitecture, in Milan
To mark the 80th anniversary of Valextra, an Italian manufacturer of leather goods, Snarkitecture turned the company’s Via Manzoni store in Milan into an all-white wonderland for Milan Design Week 2017. The firm suspended billowing white mesh from the ceiling, creating the effect of clouds overhead. A fibreglass floor was juxtaposed with sections of fabric- and fur-covered walls, all in varying shades of white. The monochromatic environment was an fitting backdrop for Valextra’s all-white MonochroMe collection. 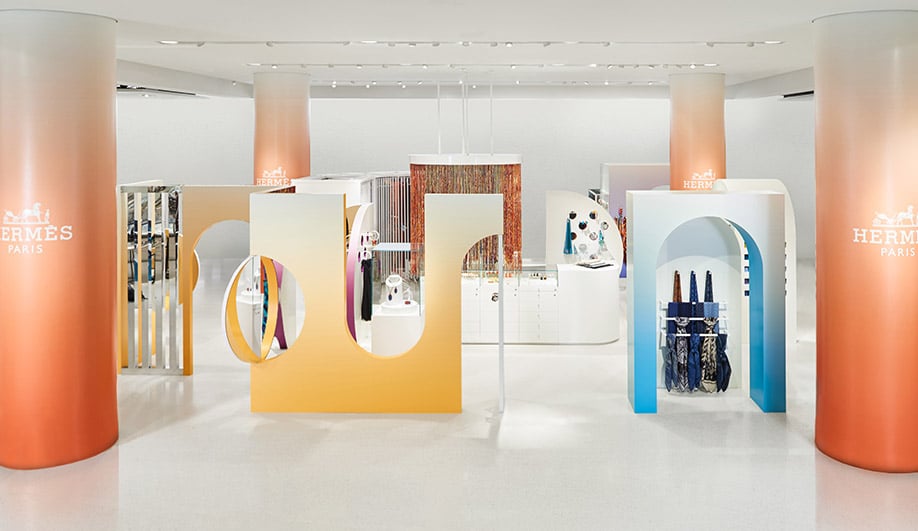 Hermès by Robert Storey of StoreyStudio, in Seattle
In effort to build a younger following, the luxury French fashion house has opened a series of pop-up shops that offer a selection of more affordable accessories, including a shop-in-shop that launched at a Seattle Nordstrom’s last year. To create a space that was decidedly Hermès, British designer Robert Storey took classic architectural forms, like archways and plinths, painted with an ombré effect, and assembled them like giant building blocks. A curved rack displaying the brand’s famous silk scarves offers an interactive component. The pop-up is on until the end of 2017. 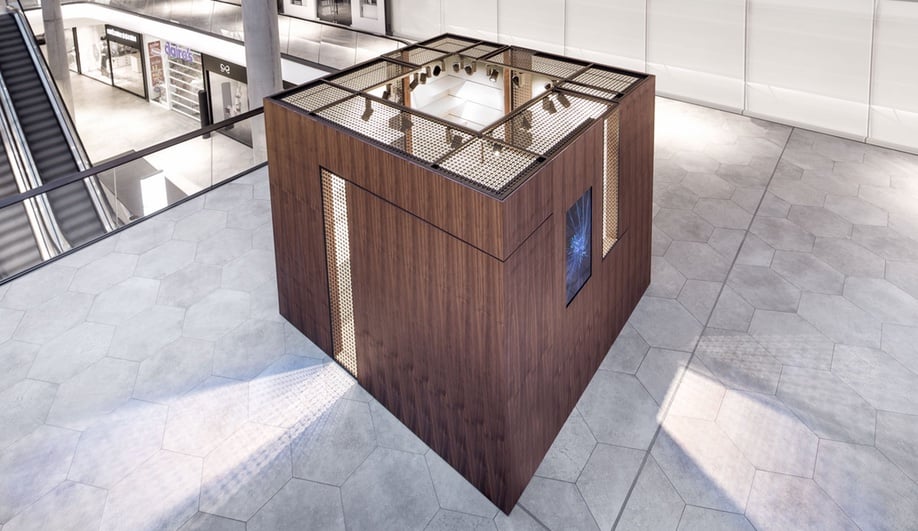 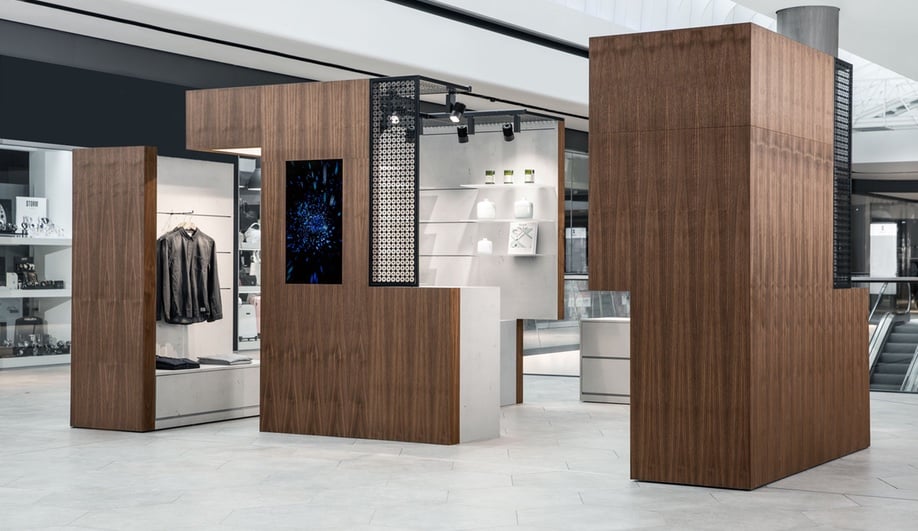 Pop-Up Box by DIA – dittel architekten
DIA’s Pop-Up Box isn’t a temporary space, but a flexible solution for pop-up retail events, first created for the popular Gerber shopping mall in Stuttgart. It’s a self-contained, out-of-the-box solution, outfitted with the necessary components of a retail environment, such as display systems and storage. Closed, the walnut-clad system’s elements fit together to form a cube that occupies nine square metres of floor space. When opened, three of the cube’s four individual elements can be moved anywhere, creating a sales floor of between 20 and 30 square metres. Integrated floor boxes power the spotlights.
SHARE
Twitter, Facebook, LinkedIn, Pinterest, Email
TAGS
Restaurant, Retail,
We rely on advertising revenue to support the creative content on our site. Please consider whitelisting our site in your settings, or pausing your adblocker while stopping by.