Jaime Hayon Creates a Whimsical Universe for Caesarstone
We caught up with the Spanish designer who, for a year-long collaboration with Caesarstone, has reimagined the quartz surfacing as a collection of quirky furniture called "Stone Age Folk." 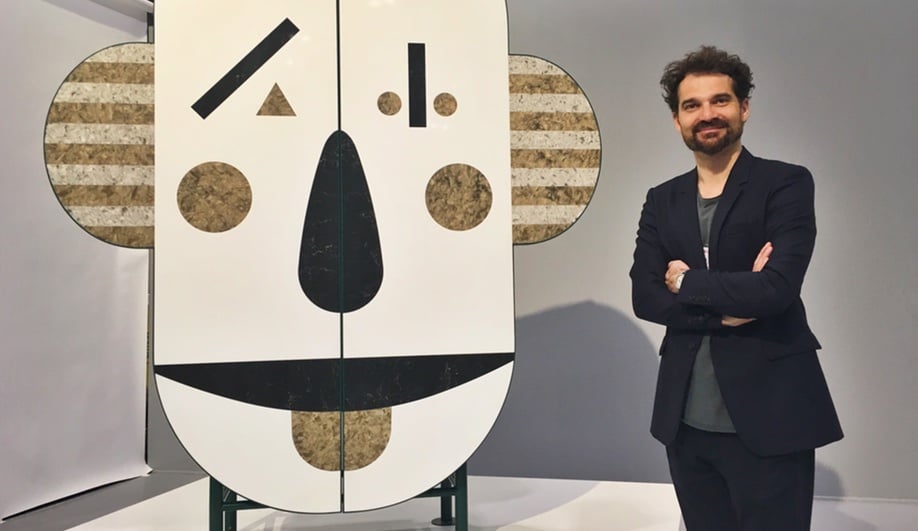 The annual Interior Design Show in Toronto has, for years, been the first stop on a design fair tour of Caesarstone‘s year-long collaboration with a top designer. The partnership sees creators like Nendo, Philippe Malouin and Raw Edges reinterpret the company’s manmade stone surfacing as an exploratory concept or playful installation. At IDS 2016, it was Tom Dixon who turned the quartz into a kitchen concept inspired by Canadian icebergs.

This year, it’s the spirited Jaime Hayon who has turned Caesarstone’s quartz into something entirely new. And the result is signature Hayon, but with a twist: his trademark cheeky characters are present but in a muted palette. The collaboration, named “Stone Age Folk,” is inspired by fauna and folklore and is comprised of seven hand-crafted furniture pieces: “face cabinets,” “bird-like dining tables,” coffee tables depicting animated characters and wall hangings. Each object is made up of multiple laser-cut pieces of quartz, in greys, blacks, browns and beiges, assembled using the craft of marquetry.

Toronto is host to the first installment of Stone Age Folk; in April, for Milan Design Week, Caesarstone and Hayon will present an architectural-scale version of the installation at Palazzo Serbelloni.

At a preview of IDS Toronto, we spoke to Hayon about the collaboration: 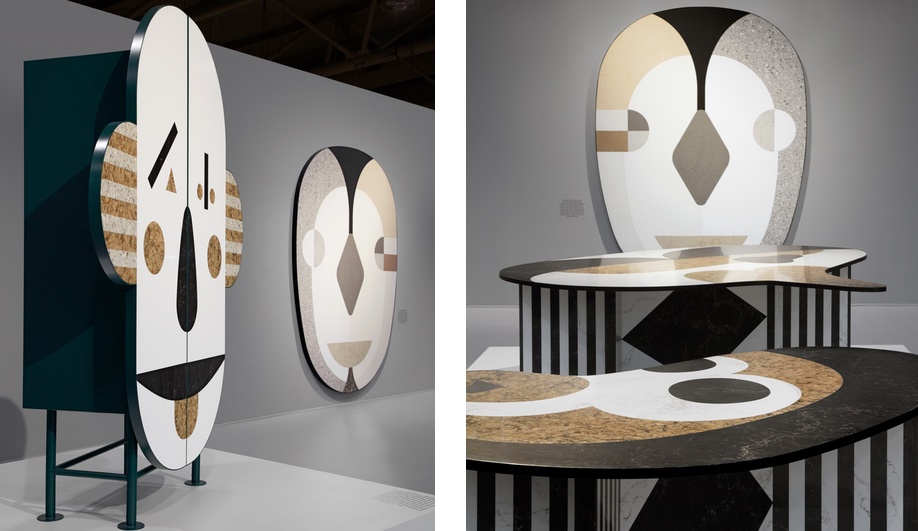 Caesarstone gave you free range for this collaboration. When the sky’s the limit, where do you begin?
When you’re given open resources, the world’s complicated … I was dreaming about case study houses, case study pavilions that they used to have at the Crystal Palace in London … These kind of whimsical and crazy places in which you can experiment and play with light and material. The beginning was this sort of pavilion idea, which we’re going to do in Milan. But inside the pavilion, there were going to be other things and Caesarstone told me the collaboration was like a trip to know me and for me to know the material. When Toronto came on board, we said ‘What can we do in Toronto that’s a little bit different to Milan?’ That’s when I started with the idea of getting inspired by folklore, thinking about bringing pieces to pedestals, bringing sophistication to the way we work with the material. I tried to elevate it more and more and more.

At the end of the journey, my collaboration with Caesarstone is going to be a new reflection of the material in a completely different context, which is attracting other people’s eyes. It’s also bringing the beauty of the material, because this is a material I will never use in a normal context. 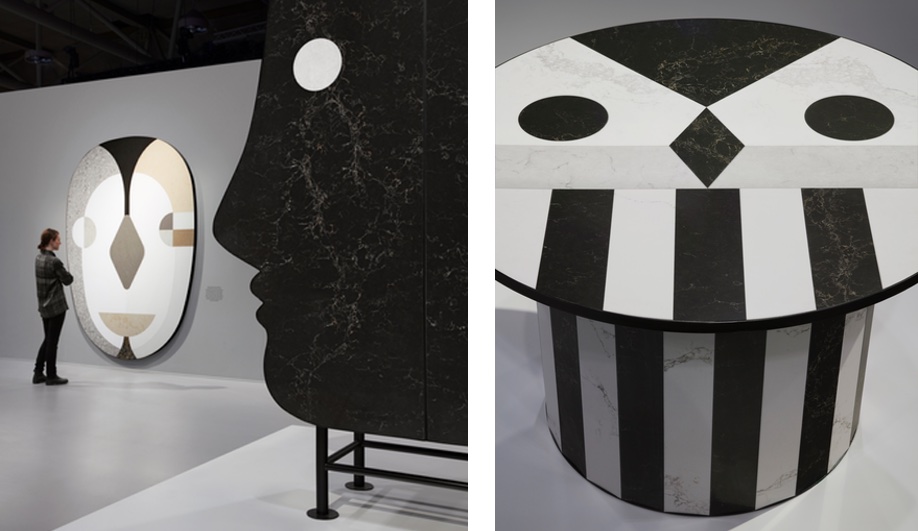 As a designer whose work is often very colourful, very playful, was it challenging to work with a flat, typically muted material?
I love it. The limitation of it makes me play. I never would have made the sort of black silhouette, the clownish guy. This [project] actually made me play with contrast, with colour in a different way. You have a little bit of colour but it’s very flat, it’s not my colours normally — the greens, the blues. But I’m actually looking more at the possibilities I have in front of me to explore my style.

I might put [the material] on the floor, I might put it in the kitchen, but I never imagined you could do such a cool thing, like to make legs like this on a table, or to make a mask that’s so decorative for a cabinet. For me, this was an exploration into 21st century quartz composite material, which is actually only possible today, not in the times of Michelangelo. It’s so thin that you can laser cut it, you can assemble it together in perfection, little pieces can be put together, no problem. It’s a different process.

What response do you hope the collaboration invokes?
People like to see that you can really imagine and dare with materials that are available to everyone. For an architect and designer, I think that’s the most inspirational you can get. You see that there are people that are daring and by daring, they’re sort of going to another level. If you don’t dare, you don’t go anywhere.