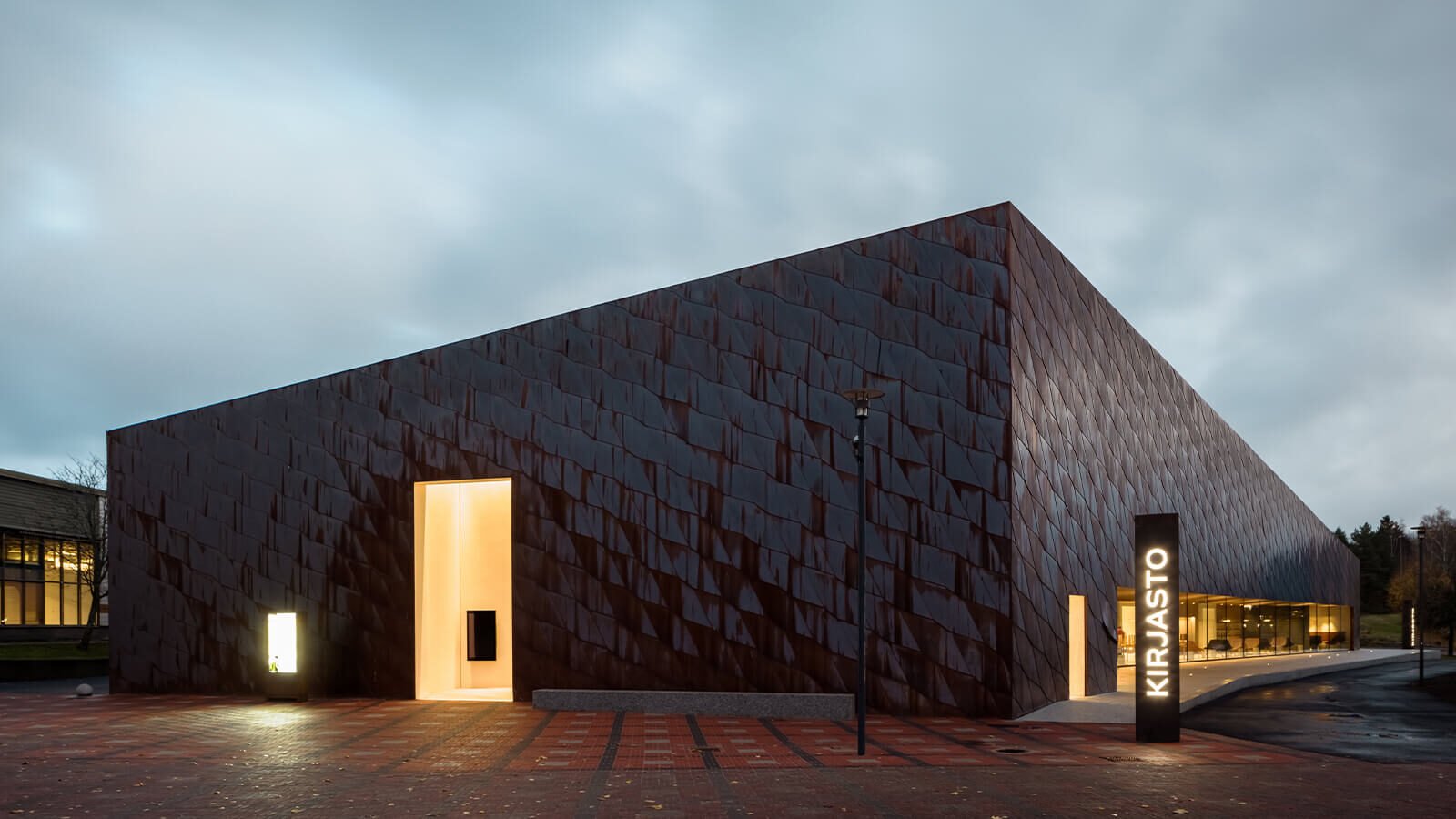 In a coastal community west of Helsinki, a new multi-purpose library by JKMM Architects is a community hub like no other.

“Typologies are dead,” says Teemu Kurkela, a founding partner at the Finnish firm JKMM Architects. His point is that, when it comes to design, people no longer think in rigid categories. Today, the world is replete with hybrid and multi-purpose buildings: a residential and office tower that doubles as a market square (Markthal, in Rotterdam), a corporate office that resembles a Prairie-style mansion (McKinsey & Company headquarters, in Toronto), a power plant that moonlights as an artificial ski slope (Amager Bakke, in Copenhagen). Over the past two decades, however, no single typology has been adapted quite as aggressively as that of the library.

In the past, libraries were repositories of knowledge, primarily (as the name implies) books. The Internet, however, has usurped this role, even if it doesn’t perform it quite so well. Today’s libraries, as the filmmaker Frederick Wiseman shows in his masterful documentary Ex Libris, are basically community centres with books in them. So what else belongs in a library? A better question might be: What else doesn’t? 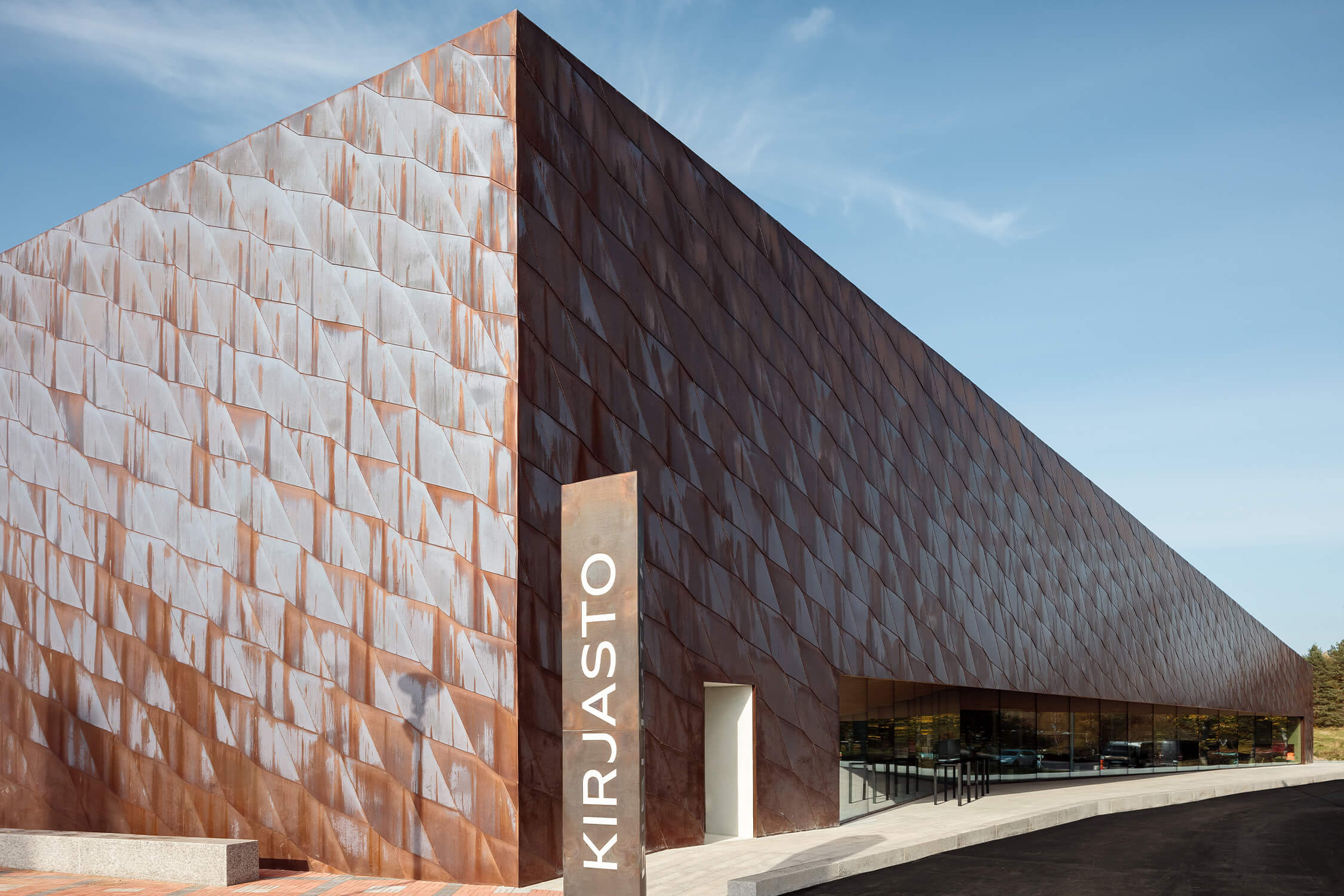 A 4,700-square- metre wedge clad in copper shingles, the Finnish municipality of Kirkkonummi’s updated library didn’t exactly replace its 1980s predecessor on the site; rather, it swallowed it whole, retaining the original concrete structure but improving interior function.

In 2016, Kurkela won a commission to redesign the main library in Kirkkonummi, a 40,000-person municipality just west of Helsinki. His intervention was sorely needed. For more than a decade after the Second World War, much of Kirkkonummi was leased to the Soviet Union, which left its stylistic mark: A great deal of the downtown’s architecture is low-rise, blocky and nondescript.

The contemporary city government envisioned the new library, which sits just north of a landmark medieval church, as the first installment in a larger revitalization plan. “The idea was to rebuild the city centre beginning with cultural infrastructure,” says Kurkela. “The first stage in a successful renewal process is to remake the heart and soul of a city.” 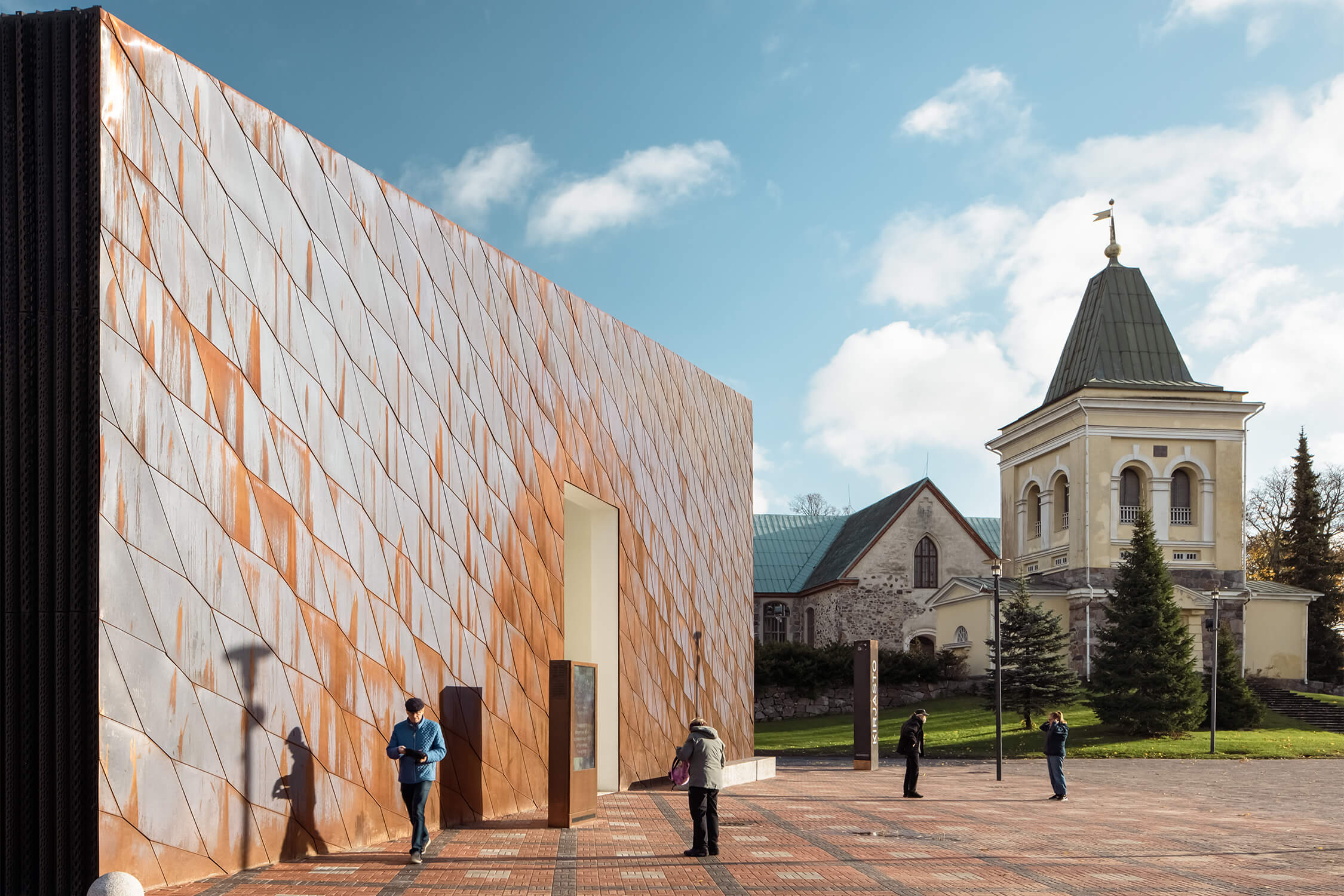 The new facility, known as Fyyri, has become a community draw both day and night.
The new facility, called Fyyri, swallows the old one whole. Within it, you can still find structural elements — walls, openings, octagonal columns — that belonged to the original building, but they’re so carefully disguised that you can’t tell old from new.

There was, however, the problem of the existing library, an angular yellow-brick building that evoked the postmodernism of Robert Venturi but without his originality. Kurkela concedes that this structure, built in the 1980s, wasn’t as blandly utilitarian as the surrounding architecture, but he maintains that it was just as ugly, particularly on the inside, with its crowded rooms and random partitions.

So Kurkela decided to cannibalize it: The new facility, called Fyyri, swallows the old one whole. Within it, you can still find structural elements — walls, openings, octagonal columns — that belonged to the original building, but they’re so carefully disguised that you can’t tell old from new. 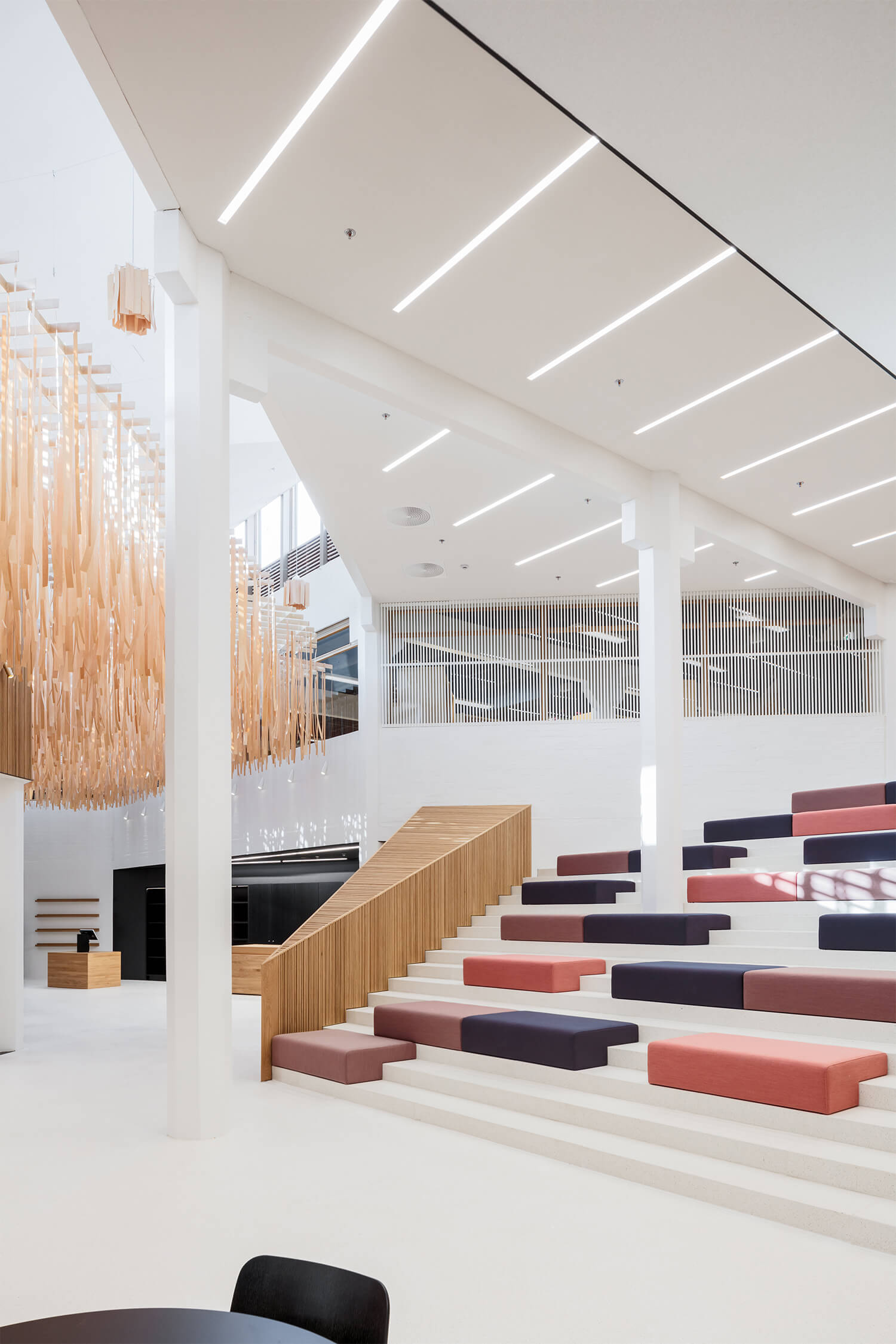 A stepped amphitheatre fitted with plush cushions immediately across from the stacks provides additional room for communal activities.

A 4,700-square-metre wedge, Fyyri can be entered at multiple points, although the main entrance is on the western corner. From there, a hallway leads past the checkout desk into an agora-like central space with double-height ceilings and a staircase so wide it resembles stadium risers. (Appropriately, some of the risers are topped with cushions.) 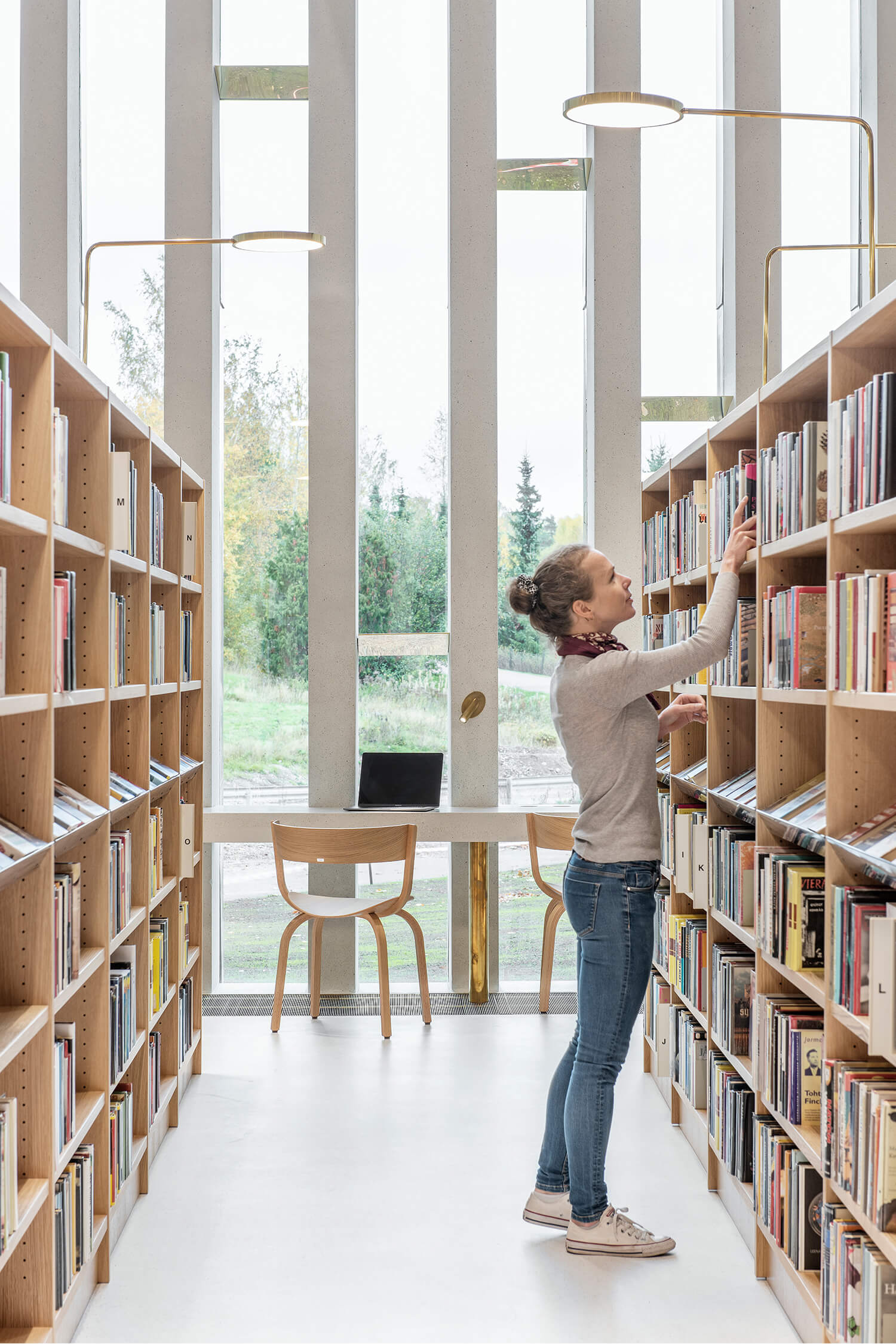 From there, visitors can move in all directions: forward to the stacks, rightward to a café and reading lounge with mullioned windows looking out onto the church, leftward to access the various other amenities (including community-club rooms, a public kitchen, an art gallery, a music school, a black-box performance hall and a maker space). At the top of the stairs is a rooftop terrace; behind them is the children’s play area. 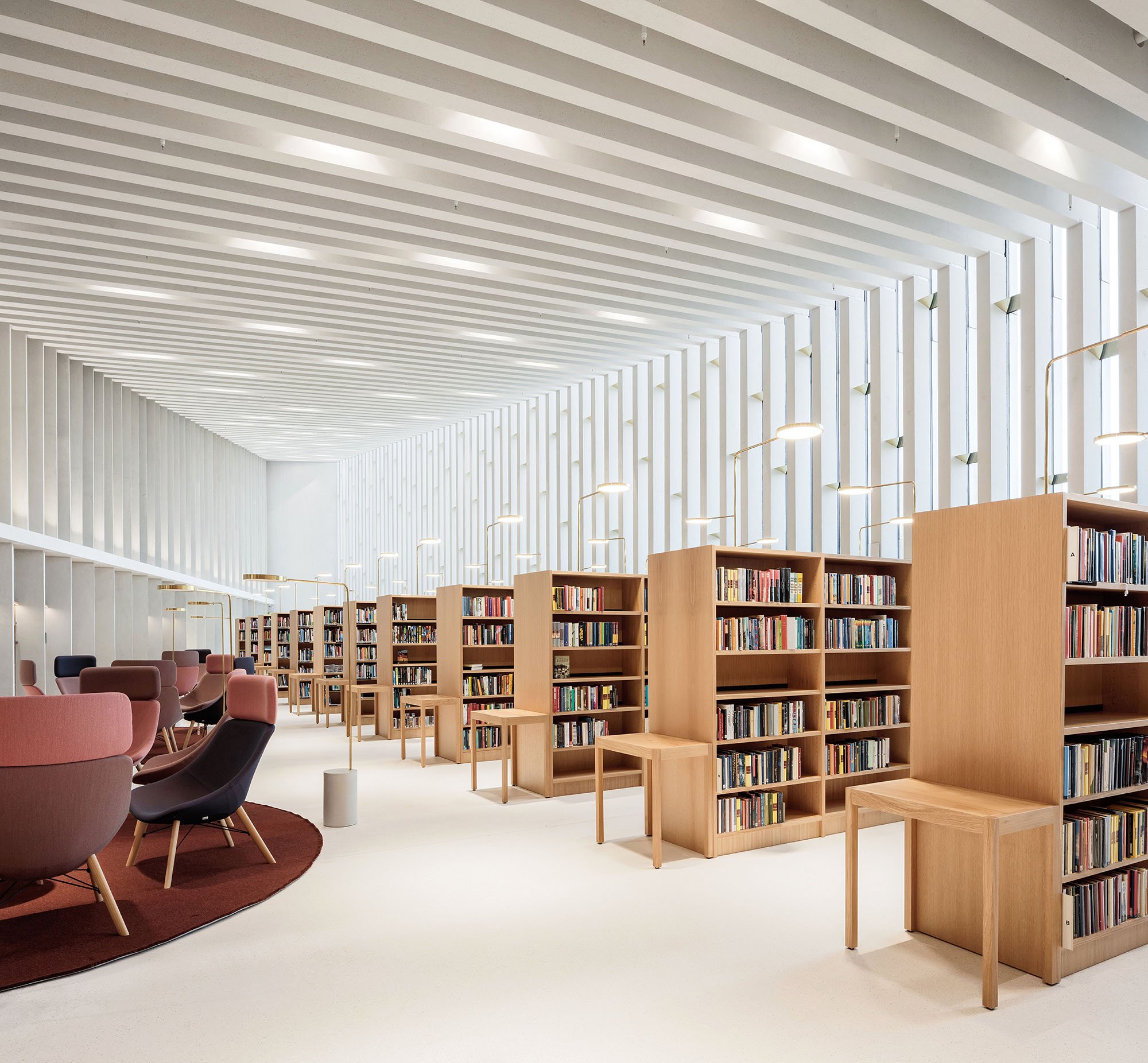 Rows of stacks are washed in light from the concrete windows along the facade. Groupings of furniture nearby further support the building’s convivial atmosphere.

Kurkela — who has taught at Aalto University, the leading design school in Finland — openly embraces the inspiration of Alvar Aalto, after whom the Helsinki institution is named. At the library, Aalto’s influence is evident in the choice of tactile materials, from the burnished brass lighting fixtures to the felt and wool upholstery to the oiled oak shelving units and vertical wall slats that conceal the acoustic panels. More than any other architect, Aalto had a knack for creating intimate, human-scale spaces within otherwise capacious modernist buildings. 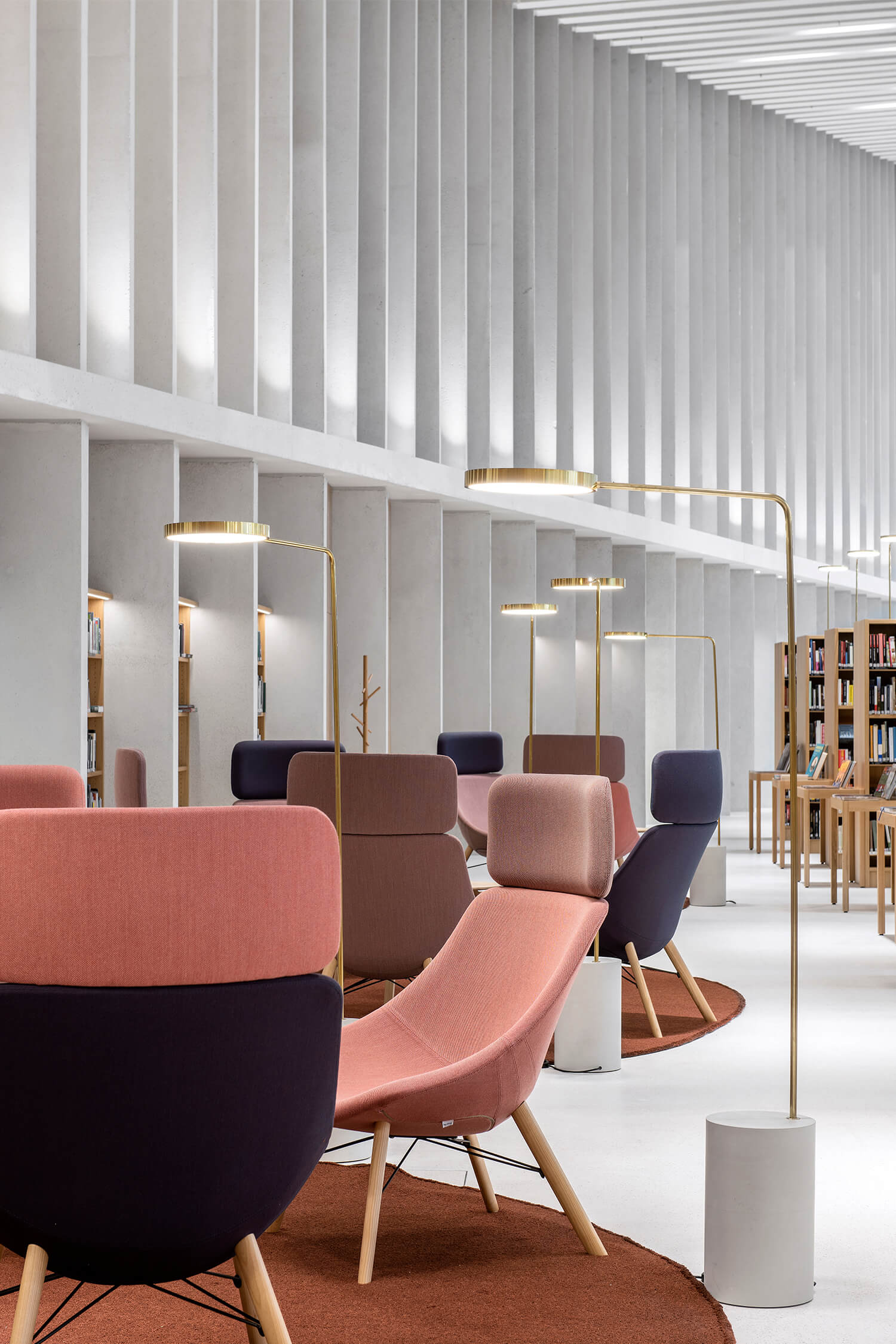 Cozy arrangements of softly upholstered seating under angled floor lamps reveal JKMM principal Teemu Kurkela’s affinity for Alvar Aalto, one of the most tactile and humanistic of modernists. 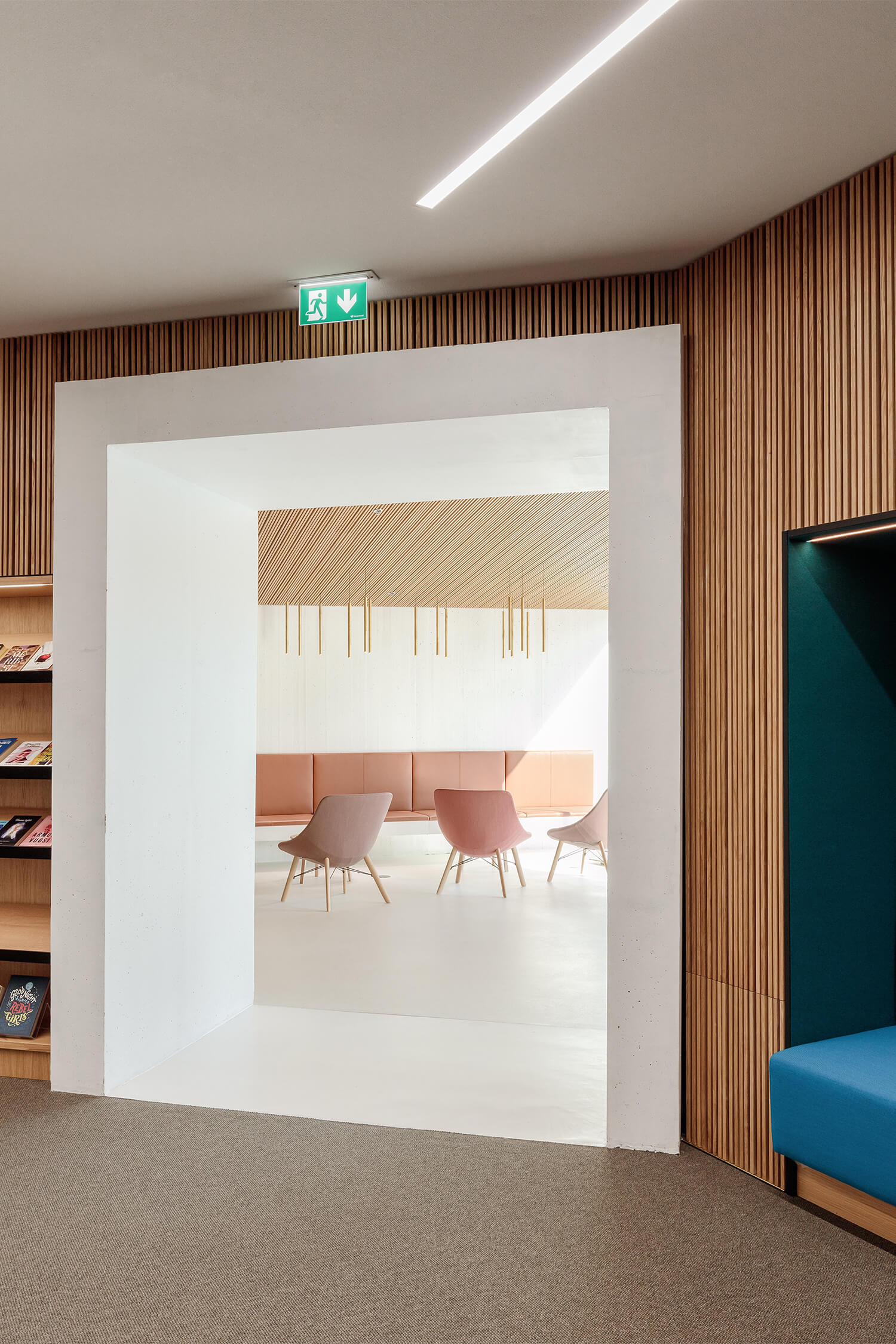 The masterful mix of materials is evident in a view through a snowy- toned passageway next to wall seating covered in blue felt.

At Fyyri, Kurkela has achieved a similar effect. Floor lights bend protectively over shelves and reading areas. Banquette seats are tucked into recessed nooks. “Libraries are big shells,” Kurkela says. “They are large, potentially empty spaces. But the furniture can add a second layer that’s inviting and human.”

Because Kirkkonummi abuts a long coastline adorned with rocky islands, the interiors reference maritime themes. For the agora ceiling, interior architect and designer Petri Vainio constructed a hanging sculpture reminiscent of a bed of reeds. Beneath the stairs, interior designer Tiina Rytkönen created a reading cave, like a watery grotto, with dappled light illuminating sea-green walls and floors.

Libraries are big shells. But the furniture can add a second layer that’s inviting and human. 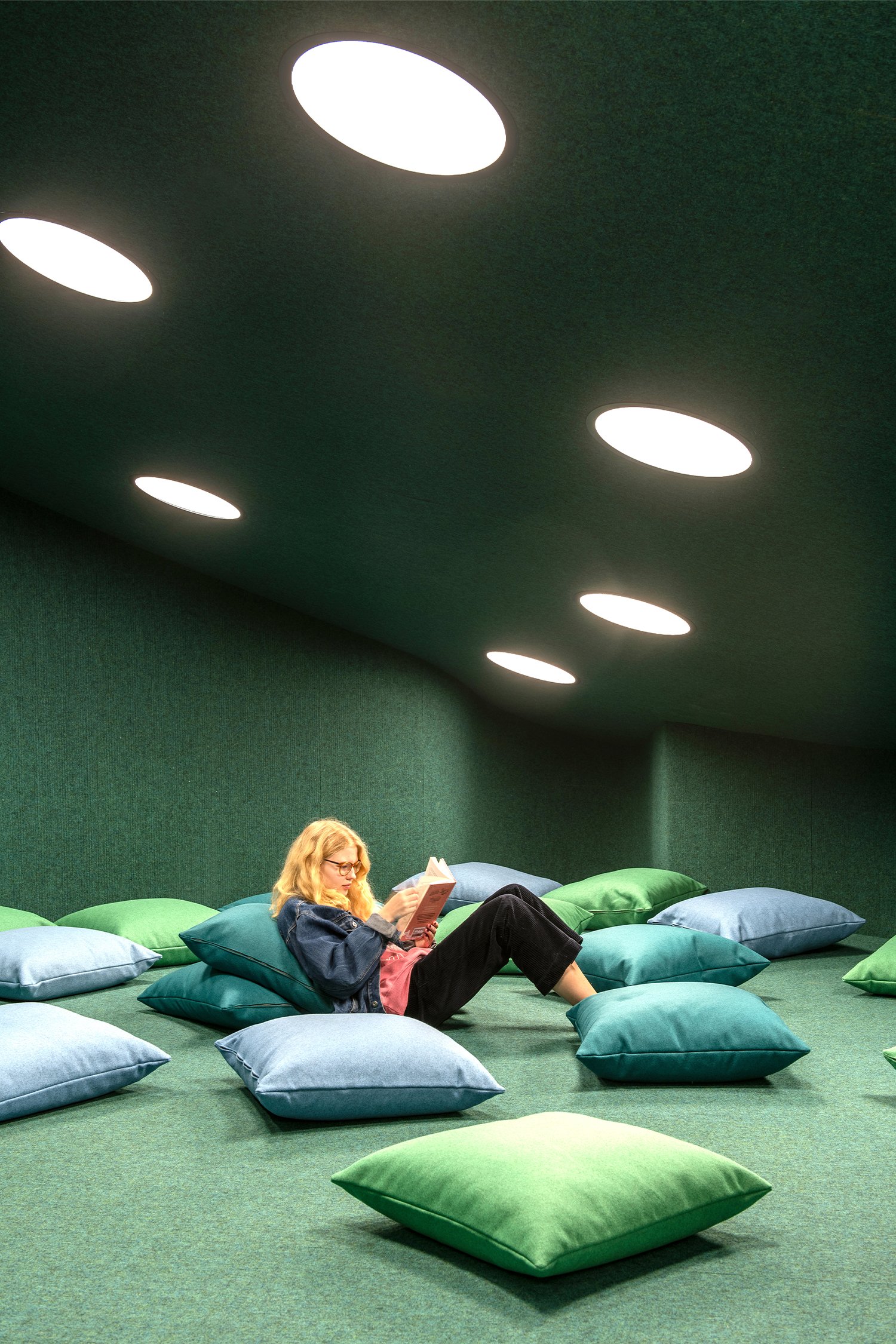 Tucked beneath a staircase, the reading cave designed by Tiina Rytkönen evokes a watery grotto. Kirkkonummi’s seaside locale drove much of the library’s aesthetic.

The copper shingles on the library’s exterior evoke a local landmark, the Porkkala lighthouse, which looks out over the Baltic Sea. (The name “Fyyri” stems from the Swedish word for lighthouse.) It’s an apt metaphor, since the library itself has become a kind of beacon. “When it opened in early October,” says Margareta Kull-Poutanen, the library’s director until March of this year, “it was so crowded it was almost chaotic.” 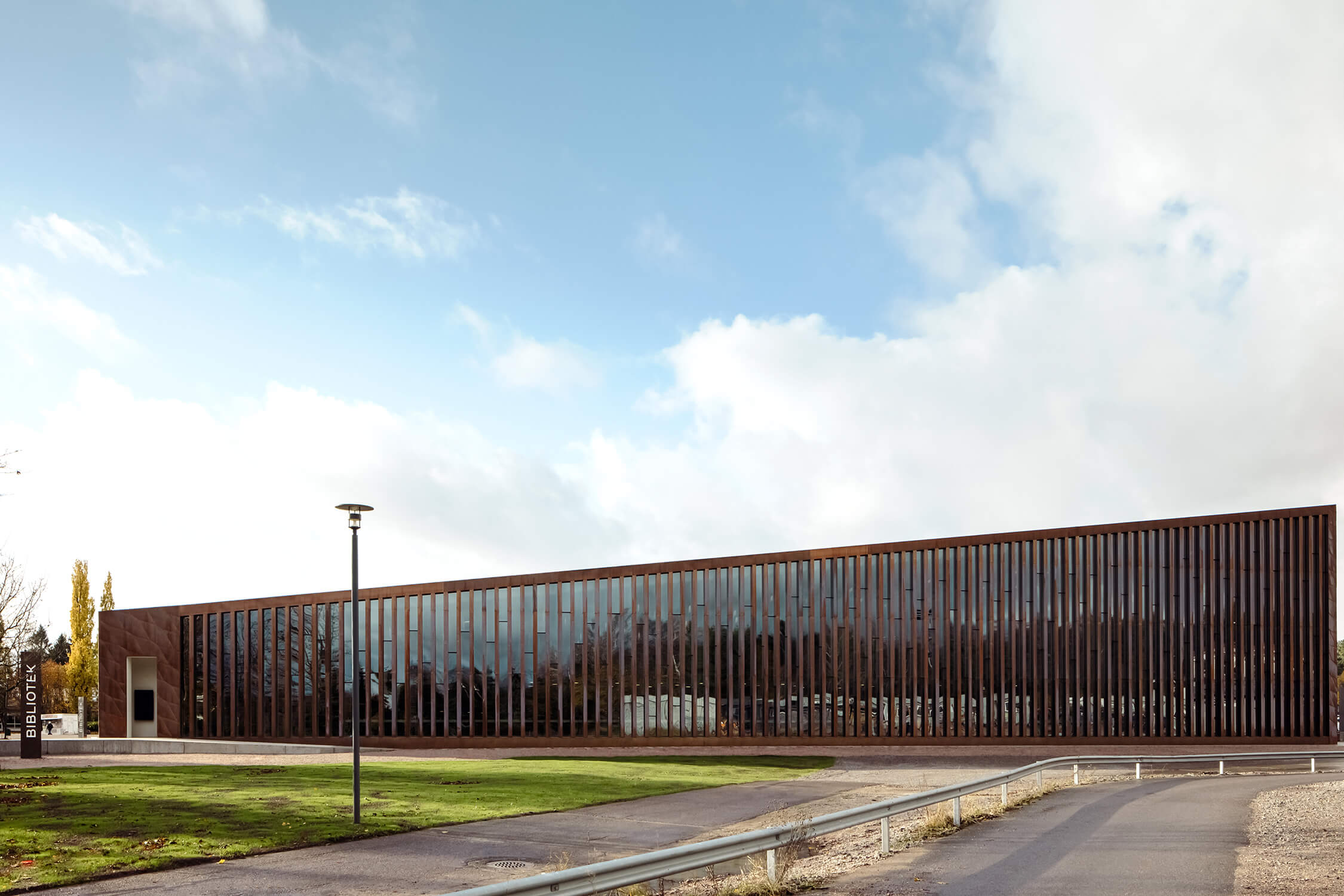 The tightly spaced columns punctuating Fyyri’s gently sloping window wall filter natural light into the building like sunshine “through a forest,” as JKMM puts it.

Kull-Poutanen explains that, in the original location, patrons had to work against the architecture, but now the architecture works for them. In the old library, there was an ad hoc maker space demarcated by bookshelves; today there’s a more dedicated area with 3D printers, sewing machines and a vinyl plotter. In the old library, community members held lectures and concerts in a makeshift theatre located in the gallery; now there’s a purpose-built perormance hall.

And in the old library, local teenagers congregated rowdily, despite noise restrictions, because there were few other places to go; they often ended up listening to music sullenly beneath their headphones. Now they have club rooms where they both play music and dance. (In December, most of the library was closed temporarily, due to COVID-19 restrictions.) 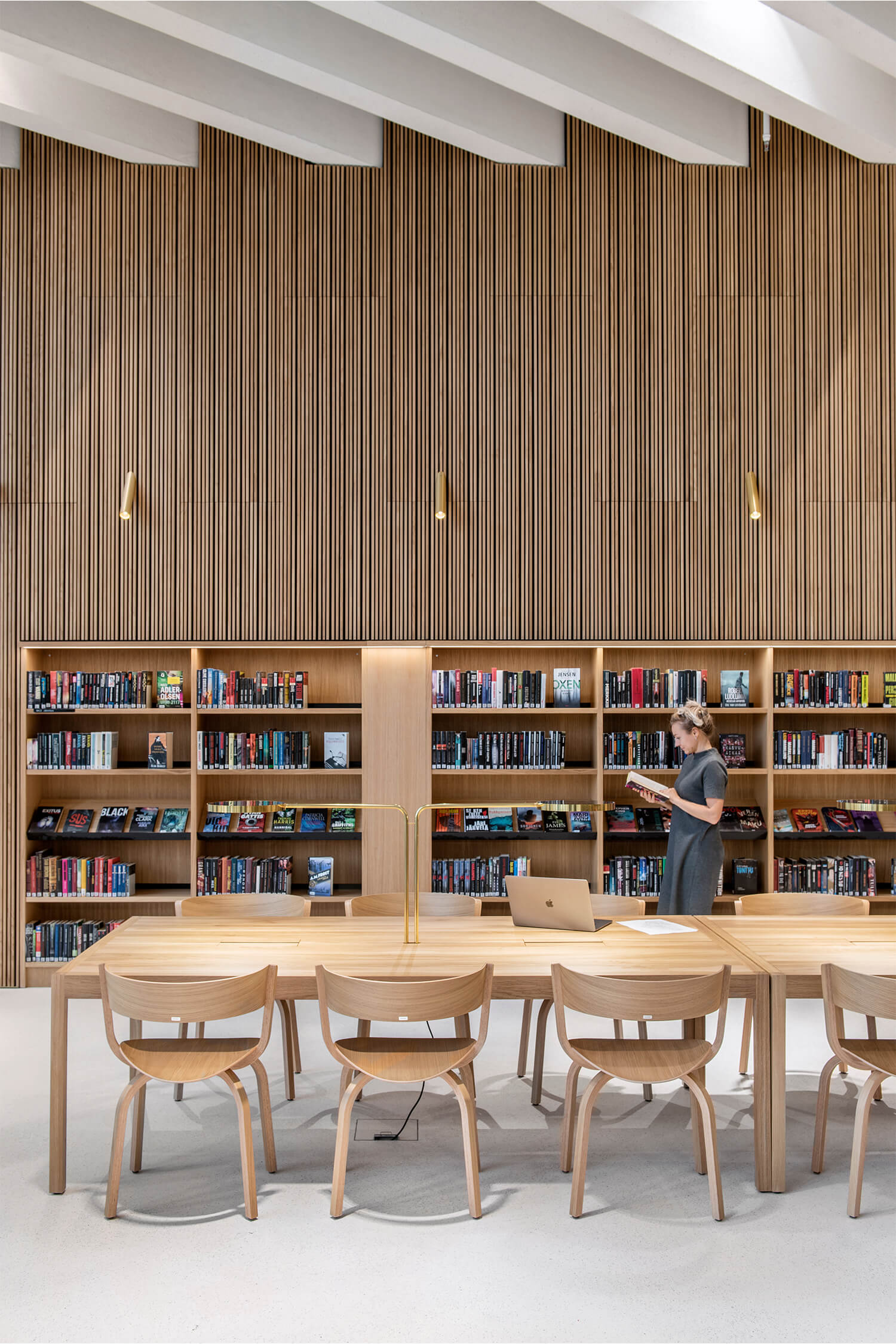 As creamy as the library’s concrete posts and beams may be, slatted timber walls and ceilings add yet more warmth. Made of oiled oak, they also conceal acoustical elements.

Needless to say, the project has been well-received, although Kull-Poutanen does field occasional complaints from visitors who find the café crowded and noisy, at least during peak hours. “I have to respond delicately,” the director says. To those complaining about noise, she recommends the second-floor silent reading room, where patrons can bring both books and coffee. As for the other complaint — that the library is simply too popular — she fails to see that as a problem.

In a coastal community west of Helsinki, a new multi-purpose library by JKMM Architects is a community hub like no other.