This Giant Board Game Teaches Kids to Build Cities
Kids Build Cities, a game developed by Toronto architect Naama Blonder, wants to get kids in on the discussion about development, city planning and density. Yes, adults can play, too. 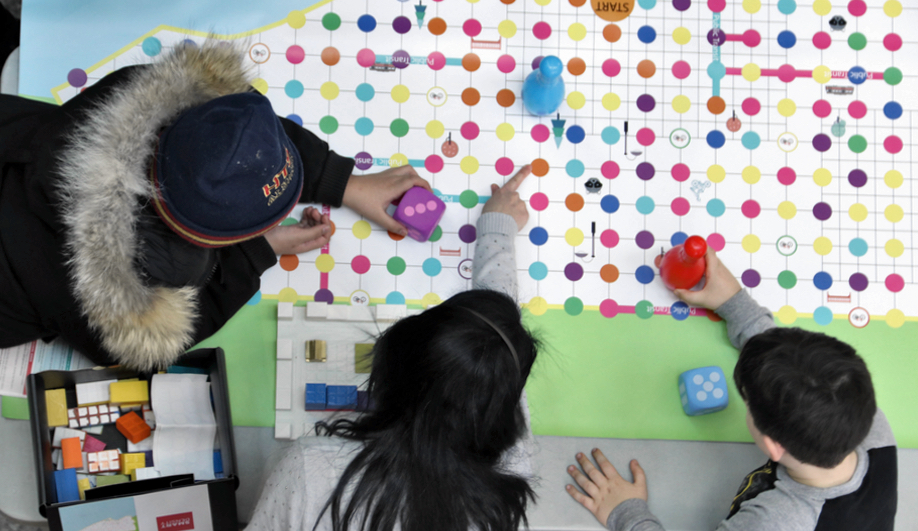 More than 600 people showed up to the community consultation about the redevelopment of Honest Ed’s, a beloved discount store located in Toronto’s leafy Annex neighbourhood. It was a scene familiar to any city undergoing rapid development: residents were fearful of new real estate developments, unsustainable density and tall buildings that cast unwanted shadows. Property values are at stake, and there are, typically, accusations of NIMBYism. Things can get hostile, quickly.

Smart Density architect Naama Blonder, who has also worked with local firms Hariri Pontarini Architects and Urban Strategies, was on hand for the Honest Ed’s consultation. Her experience led her to thinking about ways to deepen the dialogue about city building – minus the hostility. “We have very engaged communities in Toronto,” she says. “But often, people don’t understand the rules of the game. What are the constraints planners, architects and even developers are dealing with?” 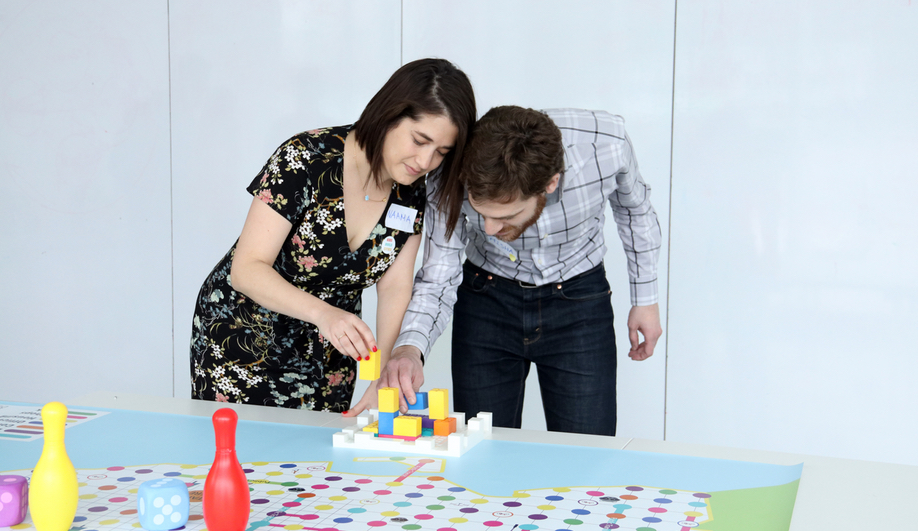 To answer those questions, she developed Kids Build Cities, a board game that challenges kids to, well, build their own cities. “When families sit together to play a game, they come together to overcome the challenges that game raises,” says Blonder. “So we decided to come up with a game that brings development challenges together in a fun, interactive way. Our hope was that it will change the adversarial atmosphere these community dialogues often suffer from.” 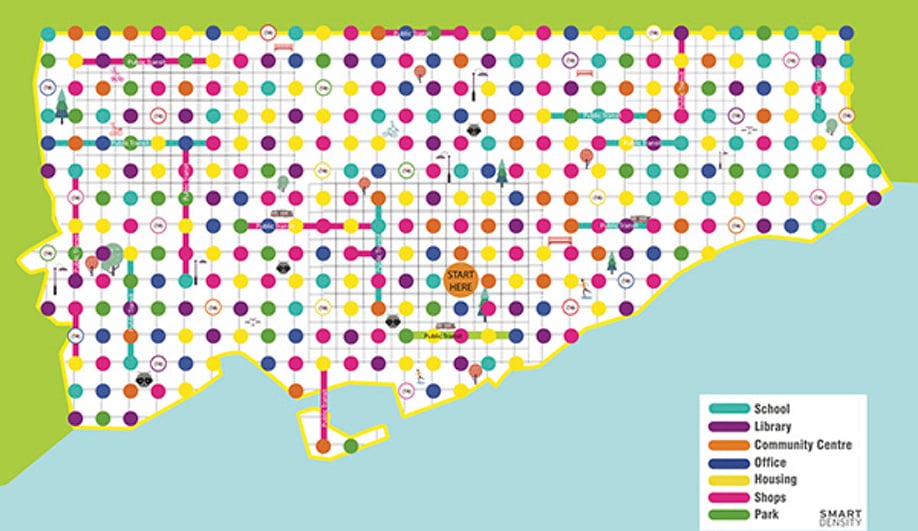 The goal of Kids Build Cities is simple: to win, players must build urban blocks that contain a multitude of uses, including housing, libraries, parks, pools, offices and shops. Players traverse the board with the roll of two dice, collecting game pieces. Trips around the board are sped up by using subways and bike shares. But there’s a catch: each neighbourhood block is too small to include every community function. “So kids have to build vertically,” says Blonder. “And that’s where the discussion happens. You hear parents say, ‘Why are you building everything on top of each other? It casts shadows!’ “

We caught up with Blonder to discuss how kids – “who are brilliant,” she adds – react to Kids Build Cities.

I wanted it to be a giant board game, because I remember that when I was a kid, I liked things that were out of scale. I liked really miniature cars or any board games that were really big. So I wanted to have that experience with Kids Build Cities.

With Kids Build Cities, you need to create a little neighbourhood, assembling different uses that will become part of a complete community. We are there to facilitate discussion. If a kid gets a park, for example, we ask them: “Where are you locating the park? Do you want it to be it at the centre of your block, or closer to the road, where it’s more accessible? Where are you placing your community centre? If you place shops really high up, will you be able to access them?” These are components of good city building.

We are also there to explain why height and density are crucial to the city, why we need more places to live. Housing is what is needed the most, so the game includes both mid-rise and tall building forms. 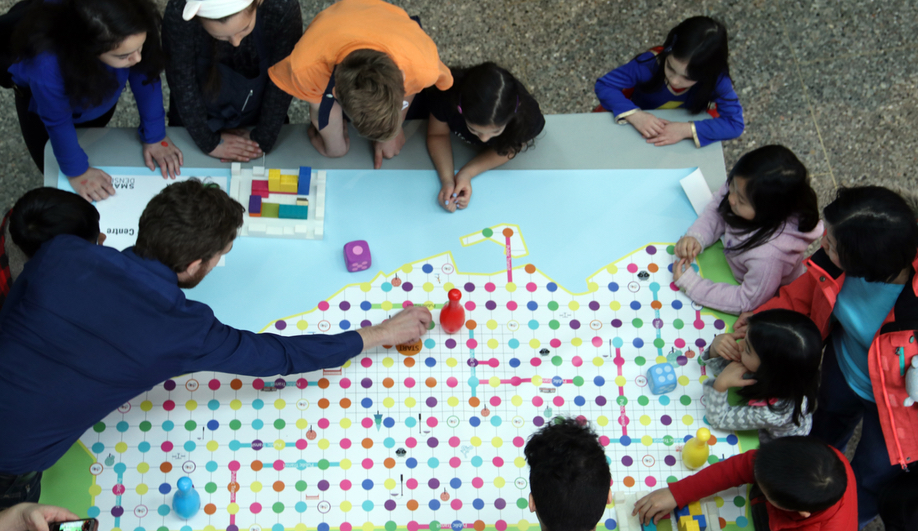 You mentioned that the kids are brilliant when they play the game. How is their reaction different from adults?

Well, one of the kids put a school on top of a house, so they could sleep in late. Some of them are very humorous. I love that. The kids are also loose about building vertically, unlike their parents. Some put parks on the roof of buildings. Some come up with really great ideas, like having schools, community centres and libraries close to each other, and near parks. I’m amazed at how similar it is to professional real-life decision-making. 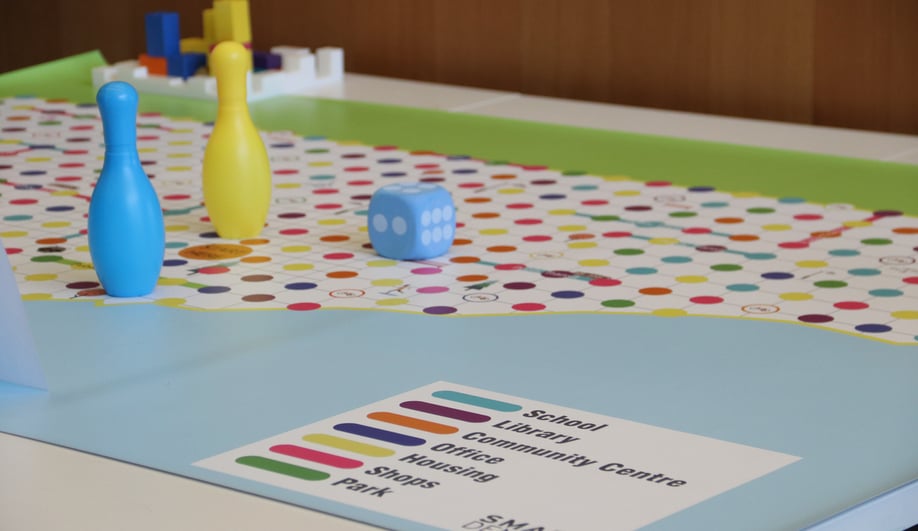 When playing, did they also notice elements that were missing from their own neighbourhoods?

When I was thinking of the uses I wanted to include, I was thinking about what kids would be familiar with: the library, the school, the community centre. But then, I would hear parents ask, “Where is the police station? Where is the fire station?” Those are uses that are very important to our city, no doubt, but it’s not something a kid experiences on a day-to-day basis.

With housing, we included tall and mid-rise buildings. I intentionally left out single-family houses, mostly because that is not a big part of development in downtown Toronto or at sites near public transit. I was wondering if they would pick up on that – a pitched roof is something kids often associate with a house. But they didn’t ask about single houses, or criticize the building forms. I was happy about that.

How did parents react? Did they manage to play nice?

I am hoping adults leave the game thinking about development in new ways, like considering studying master plans for major developments rather than just worry about height. Also, I hope they become more aware how they can help their community push elements that will effect their life. An engaged community is great, but we want one that is informed, one that is a partner and part of the discussion.

At the end of the Honest Ed’s project, the community was debating over the development being 28 or 29 stories. Most people won’t experience a height difference that incremental. But they will experience what is going on at street level and in the public realm, so that’s what I think communities should be focusing on. There are things that affect lives more than height and density.