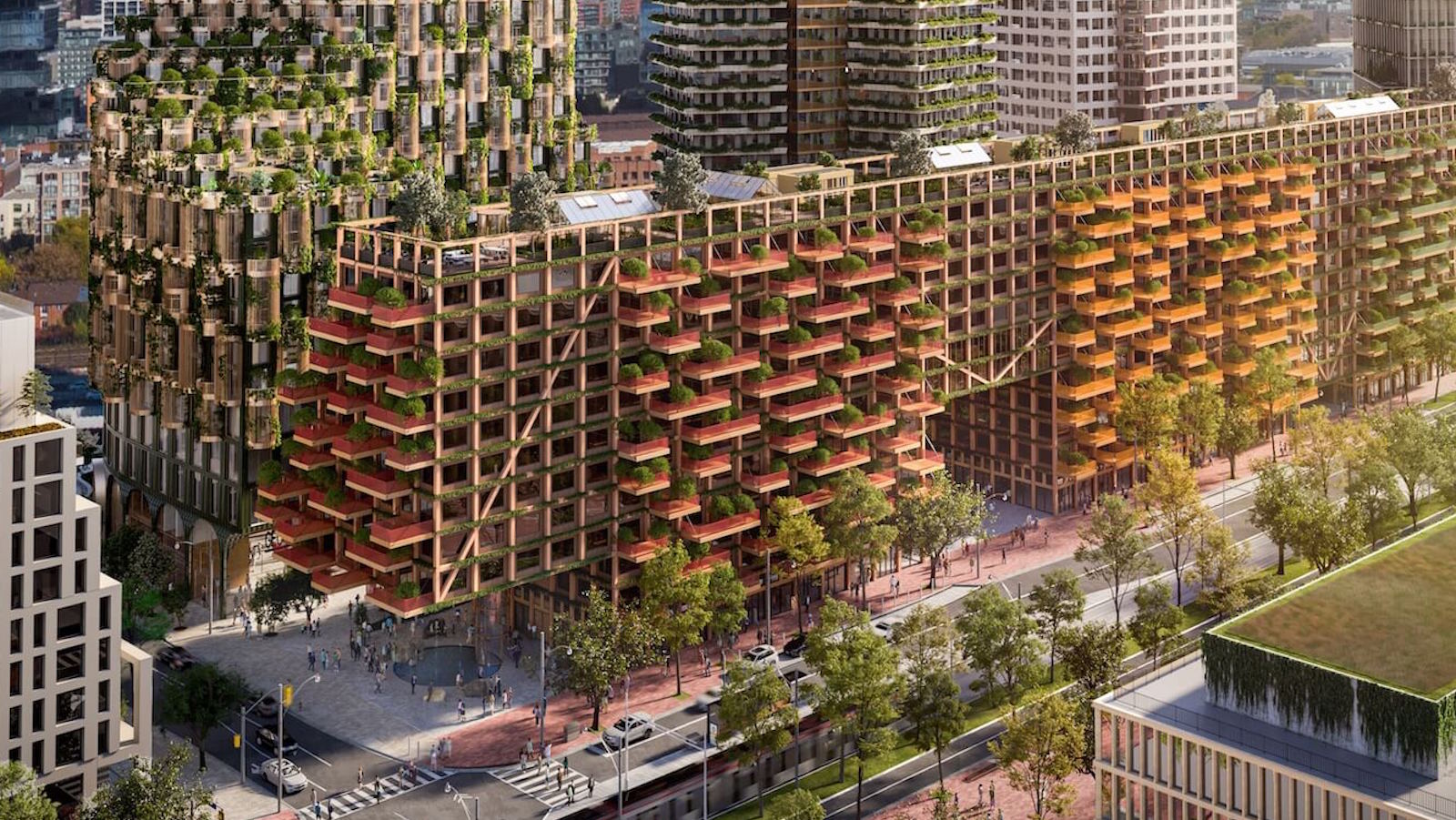 Life After Sidewalk: A Beautiful Vision for Toronto’s Quayside

How the new development strategy, with awe-inspiring architecture by Alison Brooks, David Adjaye and more, outshines the erstwhile smart-city plan.

The notional renderings are appropriately stylish and glossy. Striking forms and elaborate facades trail with greenery. A long midrise block, built entirely of wood, terraces down to a lush “community forest” filled with people no matter the season. The accompanying press release promises a “landmark cultural destination” and a “zero-carbon community” with more than 800 affordable housing units. It’s unlike any other development in Toronto. 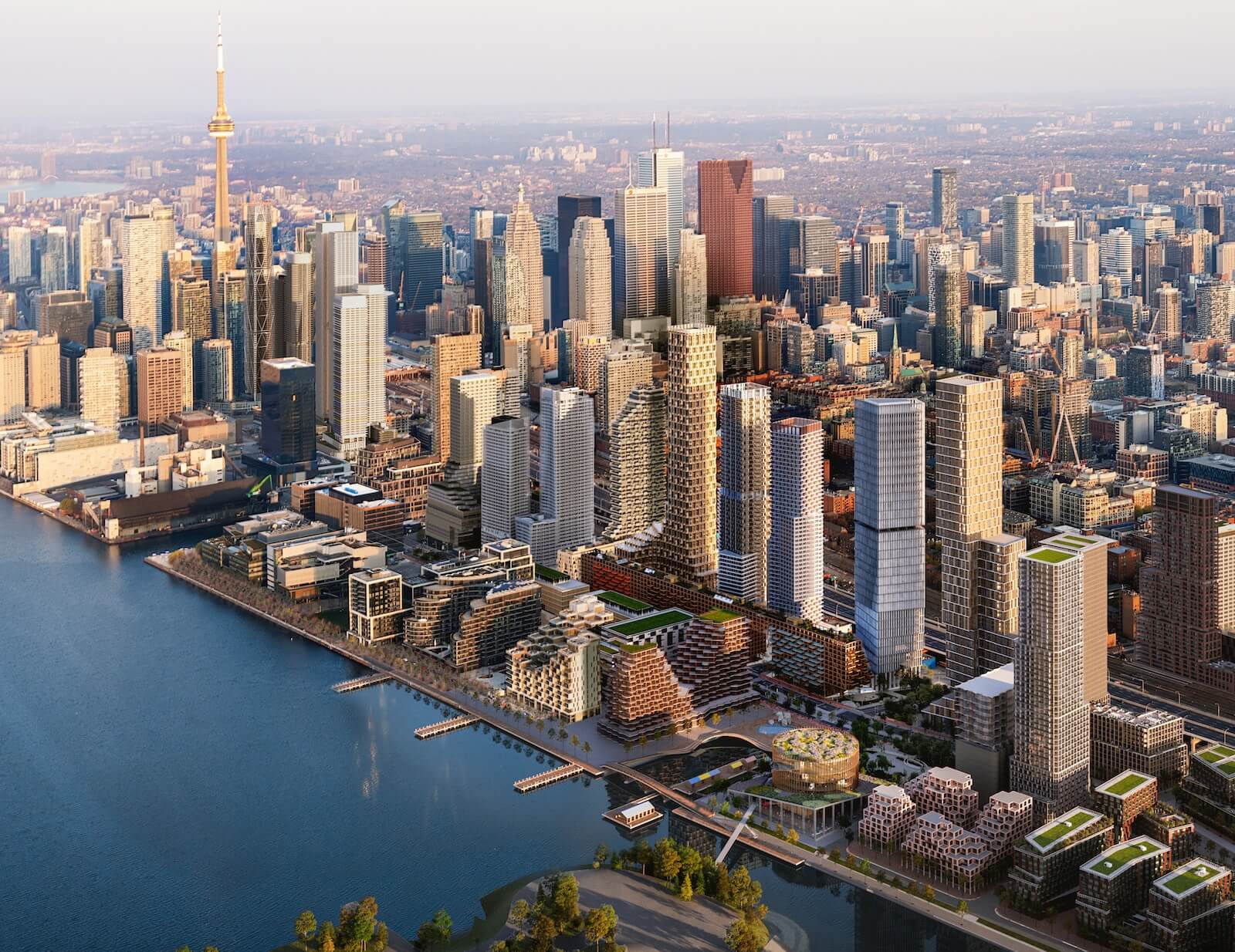 Full view of proposed development. Building heights and densities are conceptual and subject to City approvals as well as review by the Design Review Panel and public consultation.

After the Google subsidiary cancelled its controversial Quayside masterplan in May of 2020, Azure traced its issues to Waterfront Toronto’s 2017 RFP, which ambitiously situated the development as an opportunity for wide-scale and comprehensive smart-city innovation, encompassing the typically silo-ed practices of urban planning and architecture alongside policy and governance. 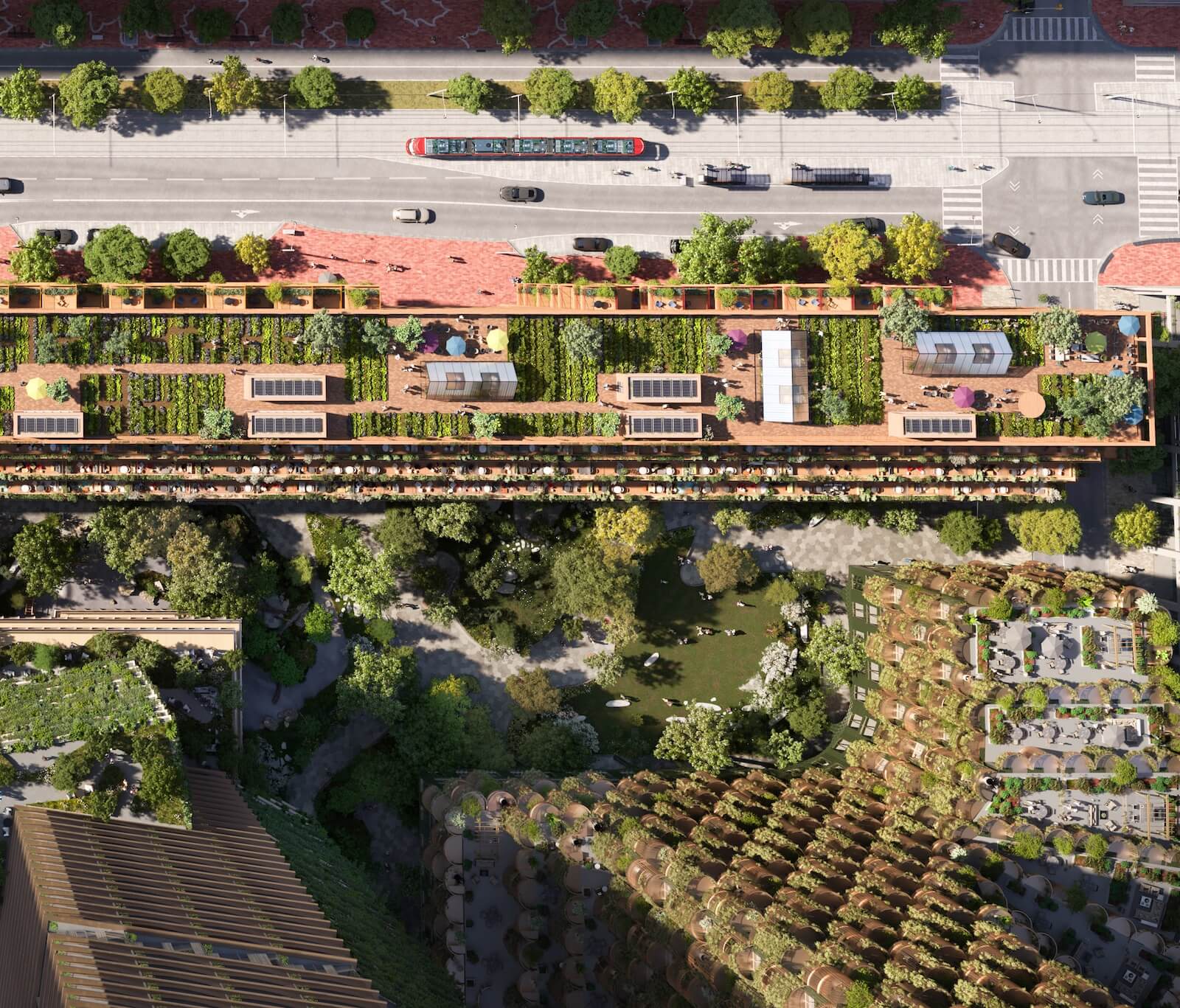 Naturally, Sidewalk Labs’ subsequent proposals and renderings were packed to the brim with the reinvention and reinterpretation of nearly every individual component that makes up the urban environment, whether those innovations were needed or not. Hence the pavers and the self-driving cars, the neighbourhood apps, “dynamic curbs” and sensor-based blue roofs.

Even the low-tech innovations reached a peculiar fever pitch. Sidewalk Labs could hardly remain content with simply using mass timber, an increasingly desirable low-carbon construction method that has few explicit allowances in the Ontario Building Code. No, Quayside was to be entirely built with mass timber, and include the world’s tallest timber tower; its renderings were replete with examples of structural gymnastics apparently unfamiliar to regions where the material is commonplace.

A rendering of the Timber House. Architect: Adjaye Associates.

The current Quayside proposal is aiming to work with mass timber, too. The Timber House, Adjaye Associates’ block-spanning midrise, is described as potentially being “one of Canada’s largest residential mass timber buildings,” a fact it highlights through an exposed wooden structural grid, façade and little patches of colourful wood balconies clustered like mushrooms on its long street frontage.

It appears the other buildings may include some mass timber components. Henning Larsen’s The Overstory, a high-rise with tapering balconies and an irregular rectilinear massing, seems to depict glulam beams and CLT within the podium’s double-height space, but it’s clear the entire tower is not to be built of wood.

It’s a departure from Sidewalk Labs’ frenzy of innovation, and it’s not the only one. The new community forest proposes a generous, car-free green space despite its total lack of dynamic curbs. Arcades, sheltered plazas and community-focused programming will feed vibrant public spaces without ETFE canopies or movable walls. Generous and exciting residential designs, like Western Curve by Allison Brooks Architects with its elegant birdcage balconies covering the upper storeys, coexist with family-friendly affordable housing even though the developers have not simultaneously designed a regulatory body to oversee anonymized urban data collection. 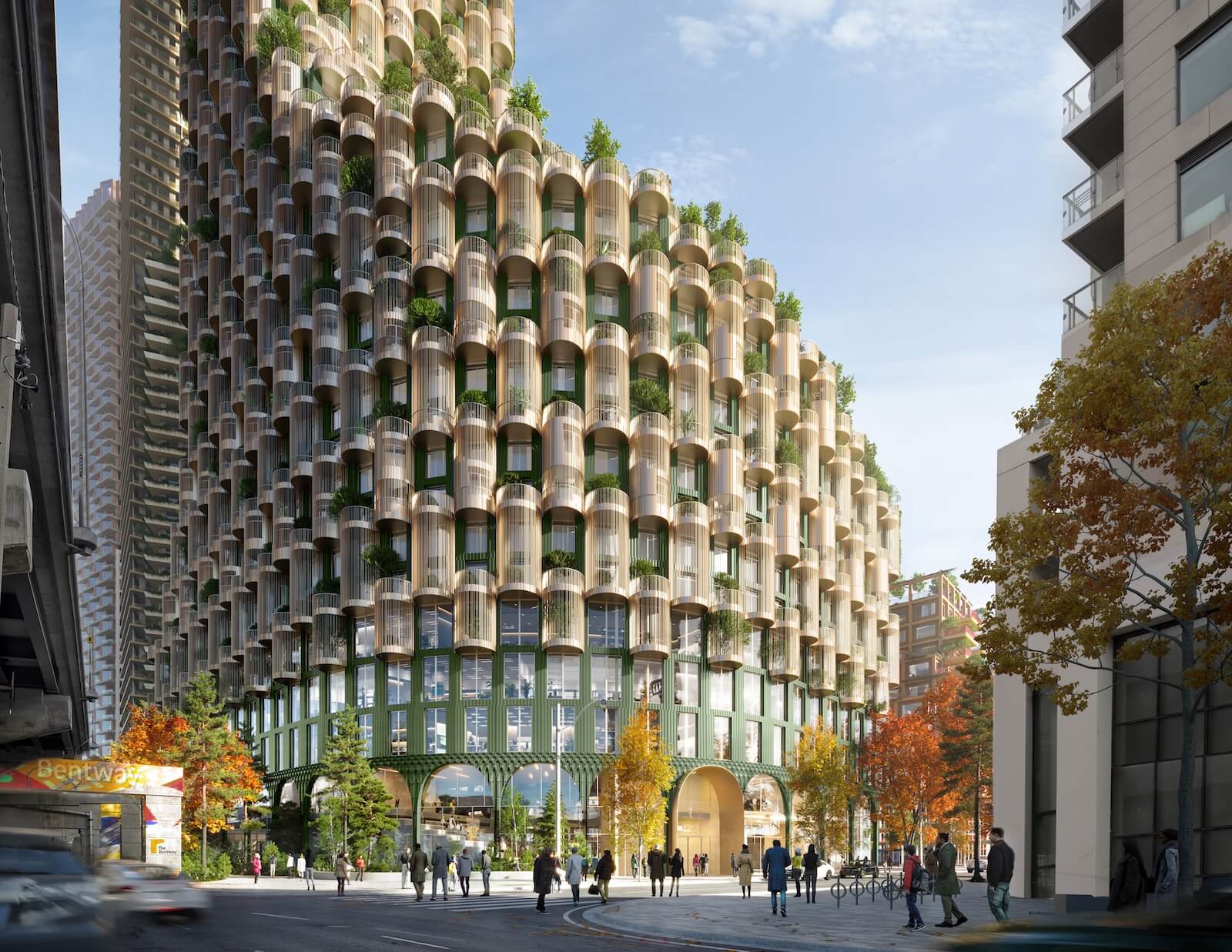 A rendering of the the Western Curve Building. Architect: Alison Brooks Architects.

None of this should undermine the clear ambition of the winning Quayside proposal: even one 12-storey residential mass timber building in the middle of downtown Toronto is ambitious. While the 2020 National Building Code is expected to allow encapsulated mass timber – a.k.a. mass timber enclosed in fireproof cladding – in Ontario the 12-storey mass timber building remains, for now, the realm of “alternative solutions.”

An artist rendering of the ground floor of the Western Curve and winter animation.

But it has been achieved to some degree. 3XN’s t3 Bayside, for example, is an 11-storey office building now under construction across Queen’s Quay from Quayside that will be built of encapsulated mass timber with a concrete core. The firm even successfully argued to keep the wood ceilings exposed. 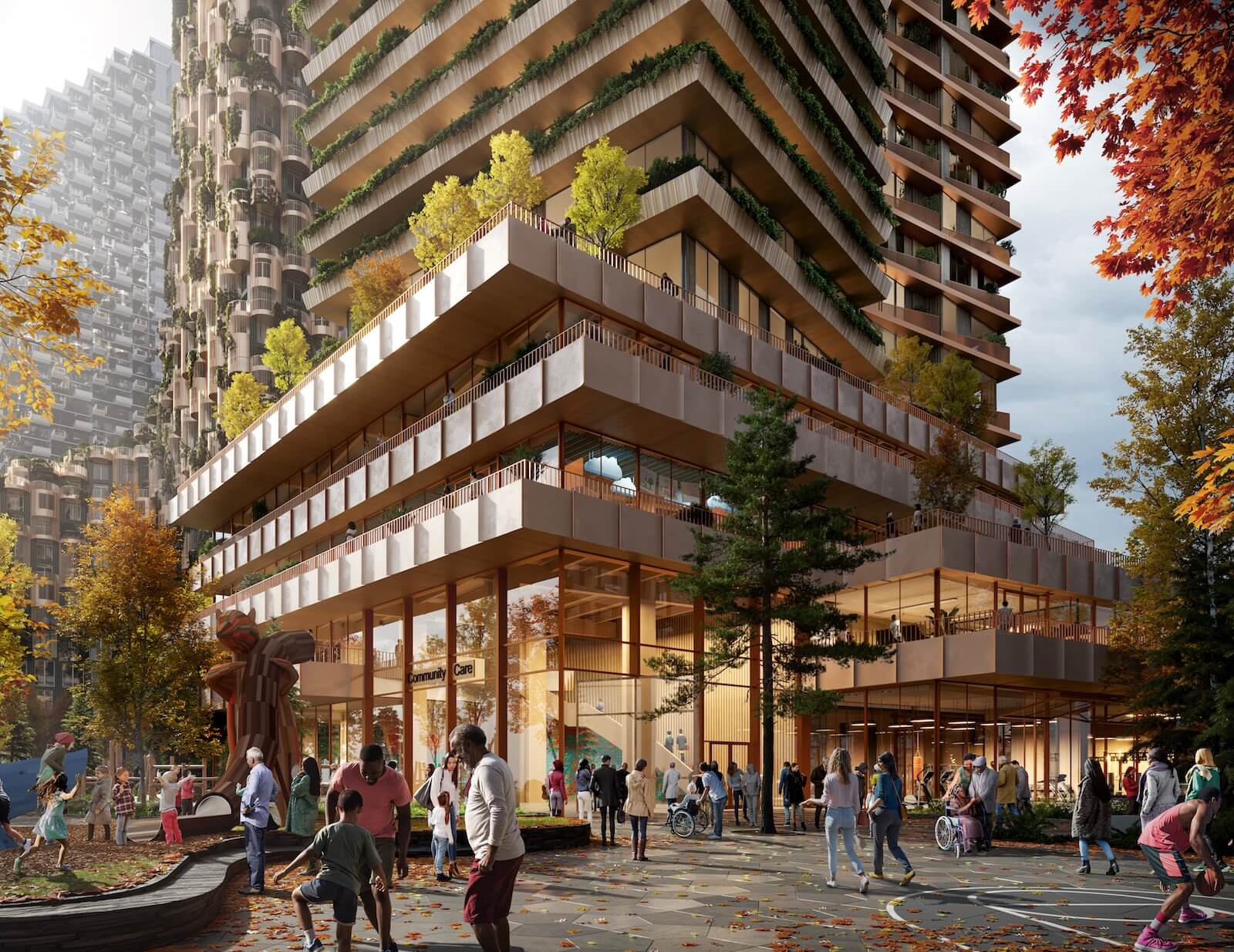 A rendering of The Overstorey. Architect: Henning Larsen

At the same time, cladding t3 Bayside in wood, as is proposed for the Timber House, has proven impossible within the building code. With possible issues around thermal bridging, maintenance, insulation and fire proofing, it will be interesting to see if and how the Timber House design develops.

These are relatively small details to read from early renderings and all of it is, naturally, subject to change. Waterfront Toronto has only now begun negotiations with the Quayside Limited Impact Partnership, for one thing. The site needs to be rezoned. The southern spur of Parliament Street, projected to host a tower and the western quarter of the Timber House, is to be modified as part of the Queens Quay East revitalization, which might impact project phasing. There will be consultations with the Mississaugas of the Credit First Nation, as well as with the Toronto District School Board, which has identified the site’s southernmost waterfront block as a potential school site. Competitions will be held for the site’s remaining towers, and the designs we see now will progress, undergoing energy modelling and value engineering. The cascading greenery and balcony trees and dramatic cantilevers may not survive. 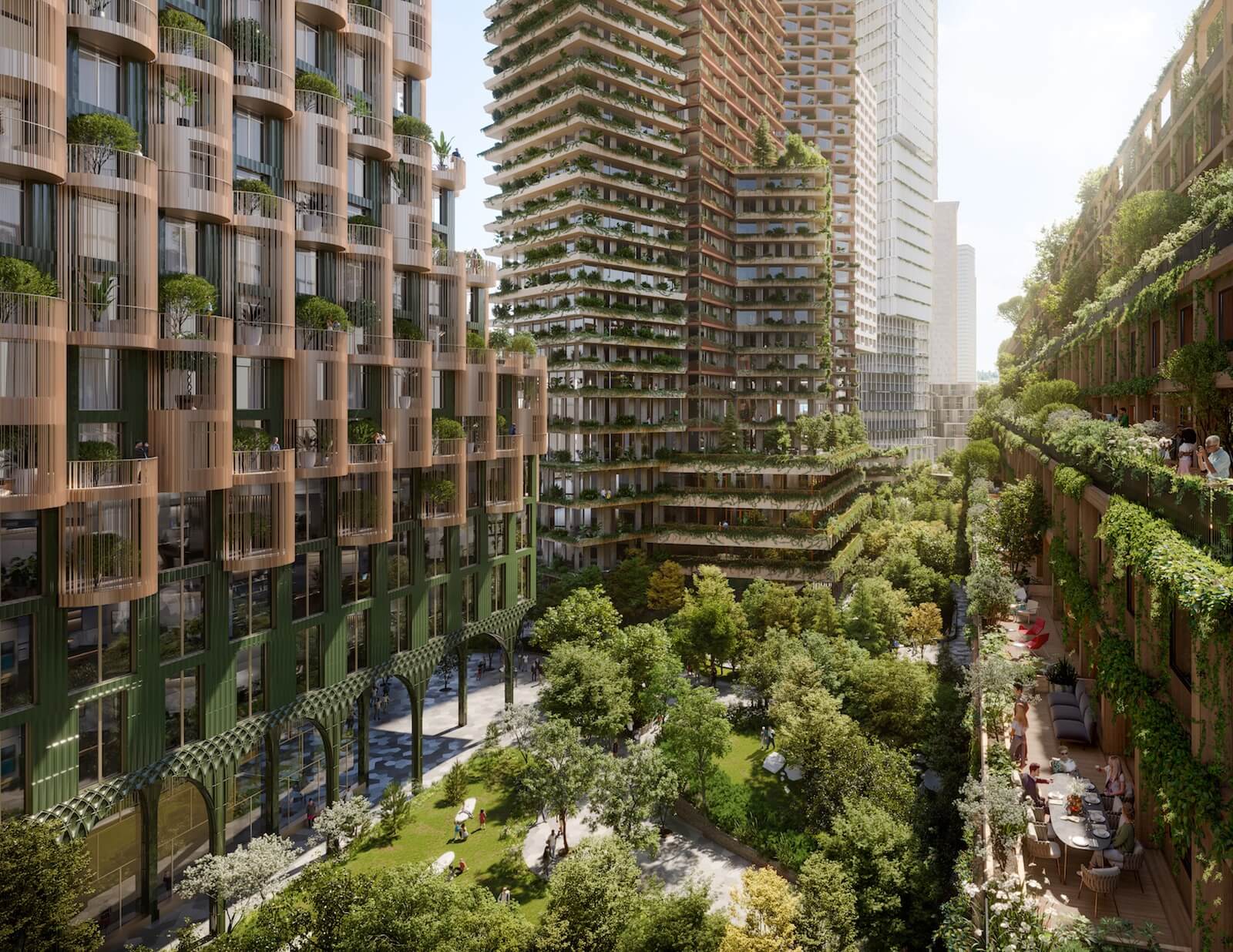 And yet right now, before any of that, this Quayside already depicts a radically different approach to city-building from its predecessor: its ambitions live within the realm of possibility. This masterplan is not founded on the premise of far-reaching and constant innovation, and it is all the better for it.

Imagine evaluating the feasibility of those massive, open-air glulam assemblies Sidewalk’s renderings depicted. They’re a rehashing of MIT’s Building 20, a “temporary” wood structure whose history of ad-hoc modifications and reputation as a “magical incubator” have since inspired office designs for Facebook and Google. The idea of movable walls and hackable spaces fits just fine in Sidewalk’s imagining of Quayside, a theoretical city made of innovation and prototypes. But with no clear possibility of insulation, airtightness, or fire separation, how could it have ever been built? 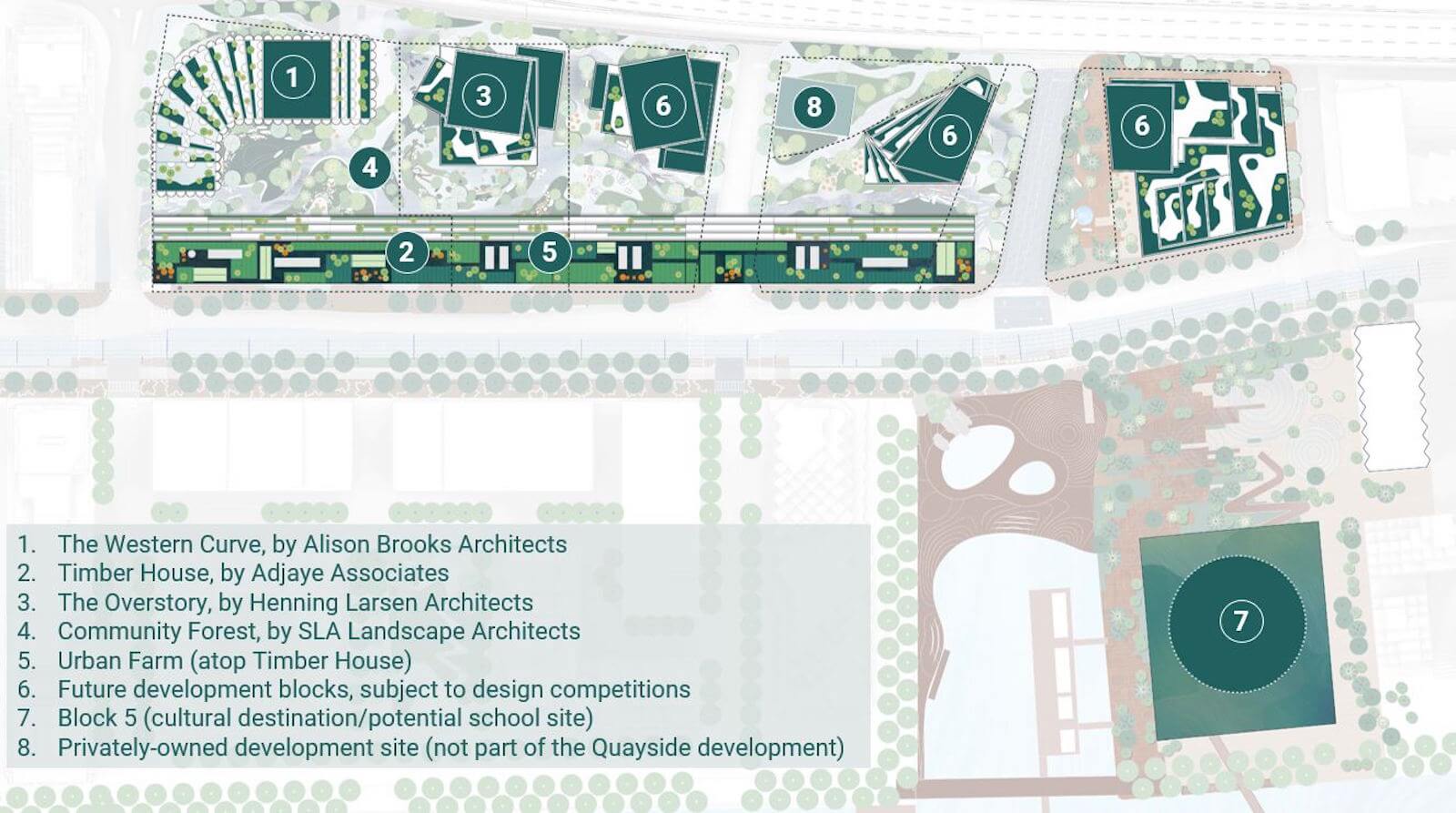 The new Quayside isn’t a techno-utopia, but it’s not clear why it ever had to be. There are plenty of solutions to the problems cities face. At this point, the innovation lies in getting them built.

How the new development strategy, with awe-inspiring architecture by Alison Brooks, David Adjaye and more, outshines the erstwhile smart-city plan.