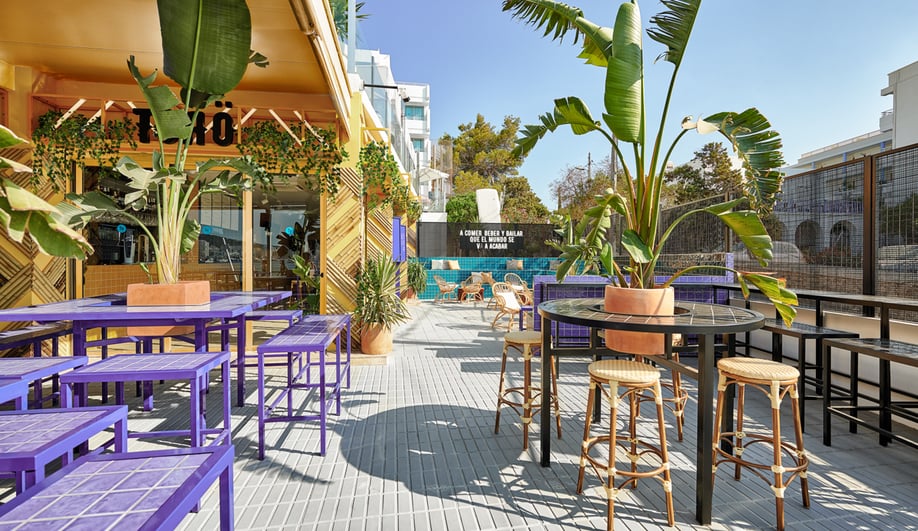 Never let it be said that Masquespacio, the award-winning Spanish creative consultancy, is wary of bold gestures. The Valencia-based firm, founded in 2010 by interior designer Ana Milena Hernández Palacios and marketer Christophe Penasse, is gaining a reputation for its vibrant hospitality projects (including cafes, restaurants and student hotels) and witty products for various design brands (Azure profiled its Dali-esque Wink Light for French-based Houtique in its May 2018 issue). 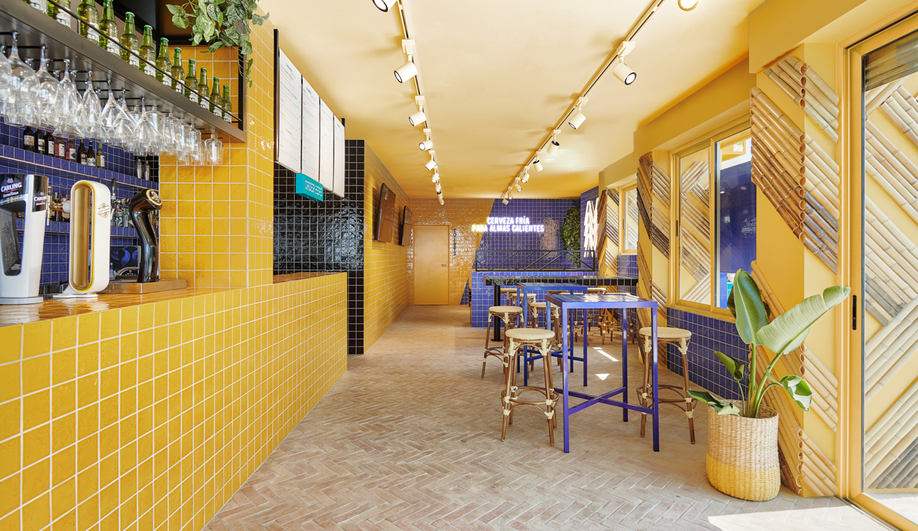 For the design of a sports and tapas bar on the resort island of Ibiza, the firm stayed true to idiosyncratic form, peppering the largely open-air venue with bold hits of colour, luxuriant plantings and such outlier (read: non-Mediterranean) touches as bamboo walls. Somehow, it all coalesces, creating an upbeat ambiance that screams summer vacation. 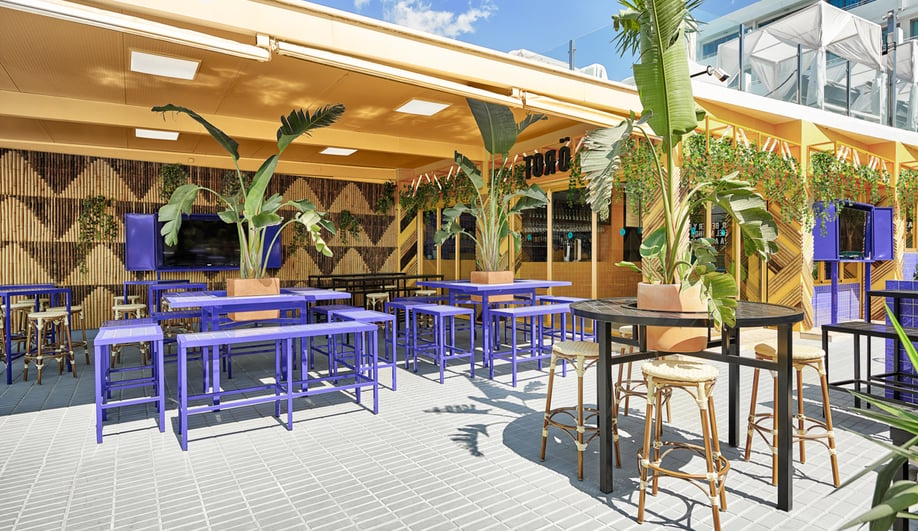 The starting point, says Masquespacio, which was commissioned for the project by Servitur Group on behalf of Typic Hotels, was fostering a spirit as sunny as the seaside setting. To that end, the firm established a poppy three-tone palette for the 200-square-metre venue, which came to be called Bar Toro and is “mostly occupied by a terrace at the edge of the sea.” 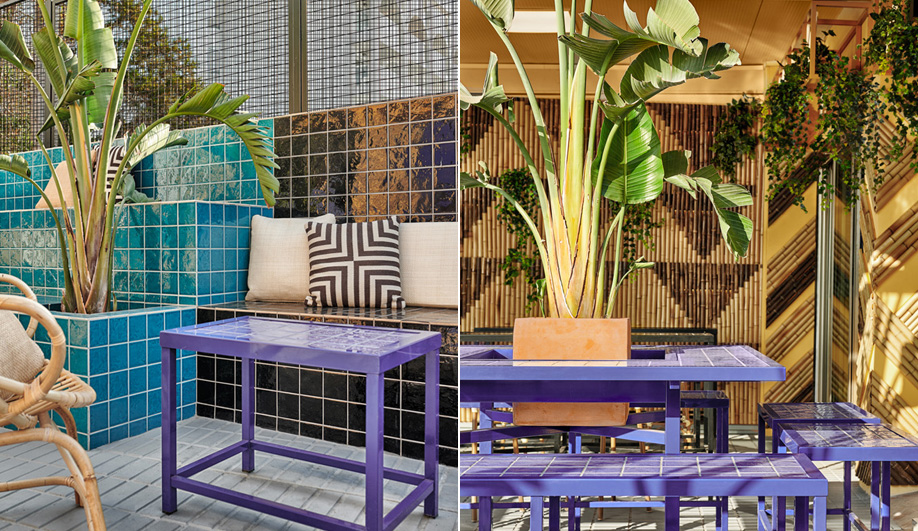 The three shades – purple blue, turquoise green and mustard yellow – highlight major elements such as tiled walls, tall metal tables and corresponding stools. The seating is organized around the tables, alongside tiled counters and in cozy nooks. Artisan clay floors unite much of the venue. The high tables and benches facilitate views of the sea.

At the same time, those bamboo-covered walls (which might register more Bali than Balearics) blend right in. They have thematic company in the towering potted palms that dot Bar Toro. 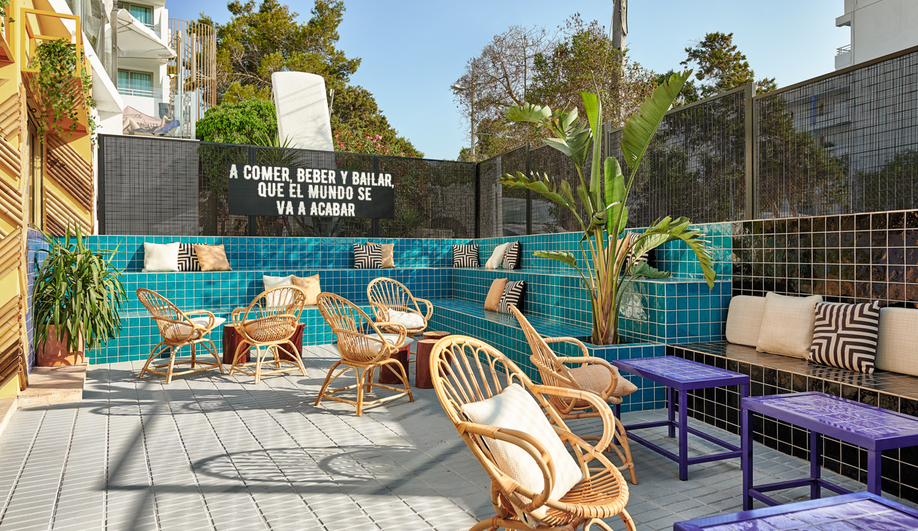 To remind the international clientele that it’s still in Spain, rattan stools and armchairs augment the seating, while Spanish quotes such as A comer, beber y bailar, que el mundo se va a acabar (Eat, drink and dance, because the world is going to end) are scattered throughout.

These elements are “are a clear reference to the essence and the joyful feeling [of being] in Ibiza,” say the designers. Bar Toro, they add, aims to be as “singular, easygoing and full of life” as its idyllic setting. 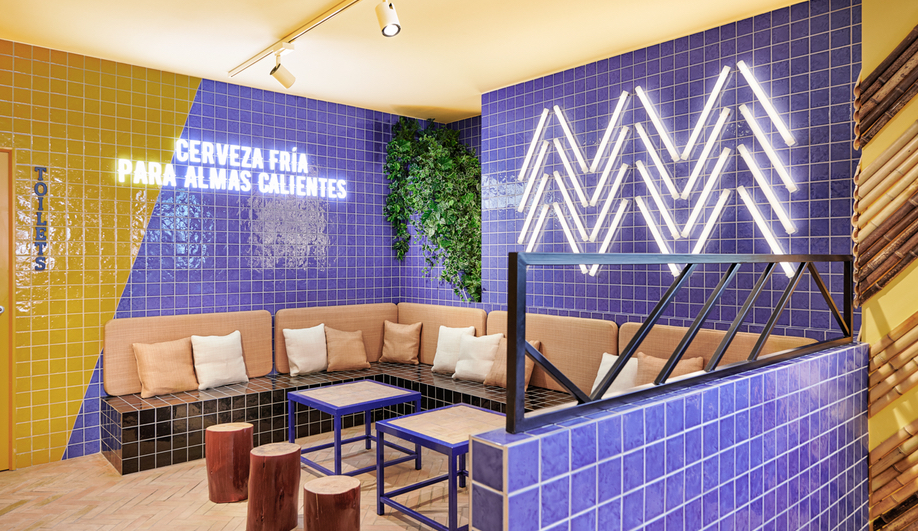