Milan Design Week and the Instagram Impulse
In Milan, the singular "experience" was exalted with light and sound installations that spoke to design's vaguer intimations of transcendence. But even these were eagerly consumed – Instagrammed as much as actually experienced. 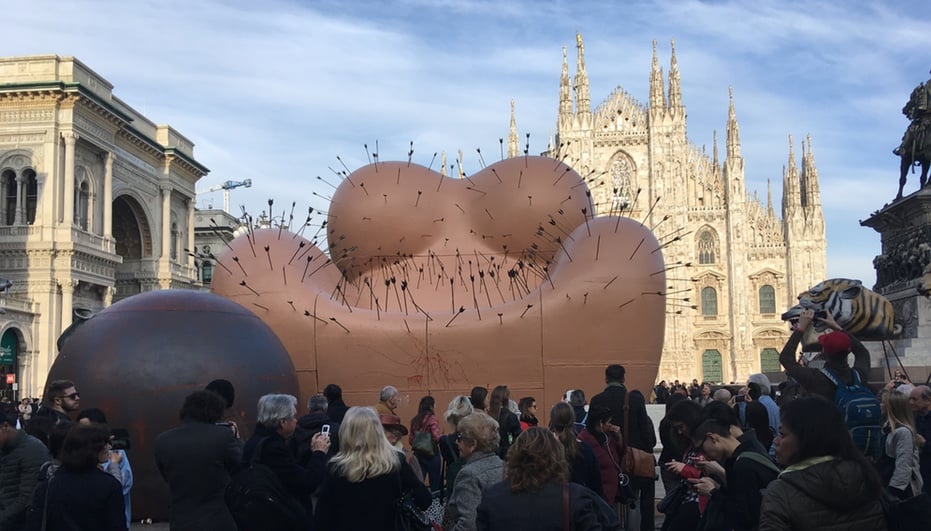 Milan Design Week is over, but the sense of FOMO lingers for many design journalists and enthusiasts who were actually there to experience it – let alone those who were not among the hundreds of thousands who made it to the Italian mecca. With so much to take in inside the massive halls of the Salone del Mobile at the Rho fairgrounds and at the hundreds of offsite events under the FuoriSalone umbrella, this is an annual phenomenon. But in recent years, the fear of missing out has only been amplified by social media. More than once, I was drawn to an event after glimpsing it on someone’s Instagram feed. Once there, I was fascinated by my impulse – refracted dozens of times over by fellow participants – to document what I was seeing, in photos and video, before actually looking at it.

To be sure, there was much to be excited about and to delve deep into when it came to Design with a capital “D.” The overarching mood – that something needs to give – was cemented by Paola Antonelli’s Broken Nature show at the Triennale. Furniture designers, architects and companies are creating products and innovating materials that can actually change how we sustainably mass manufacture in the very near future. Magis unveiled Vela, an incredibly lightweight chair made of magnesium. Vondom debuted a collection that incorporated the plastic of used fishing nets. Carlo Ratti created mycelium arches at the Orto Botanico. Rossana Orlandi commissioned her favourite designers to make new pieces out of used plastic – and displayed them in the Railway Pavilion of the Museo Nationale della Scienza e Tecnologia as a statement perhaps about the future of innovation. 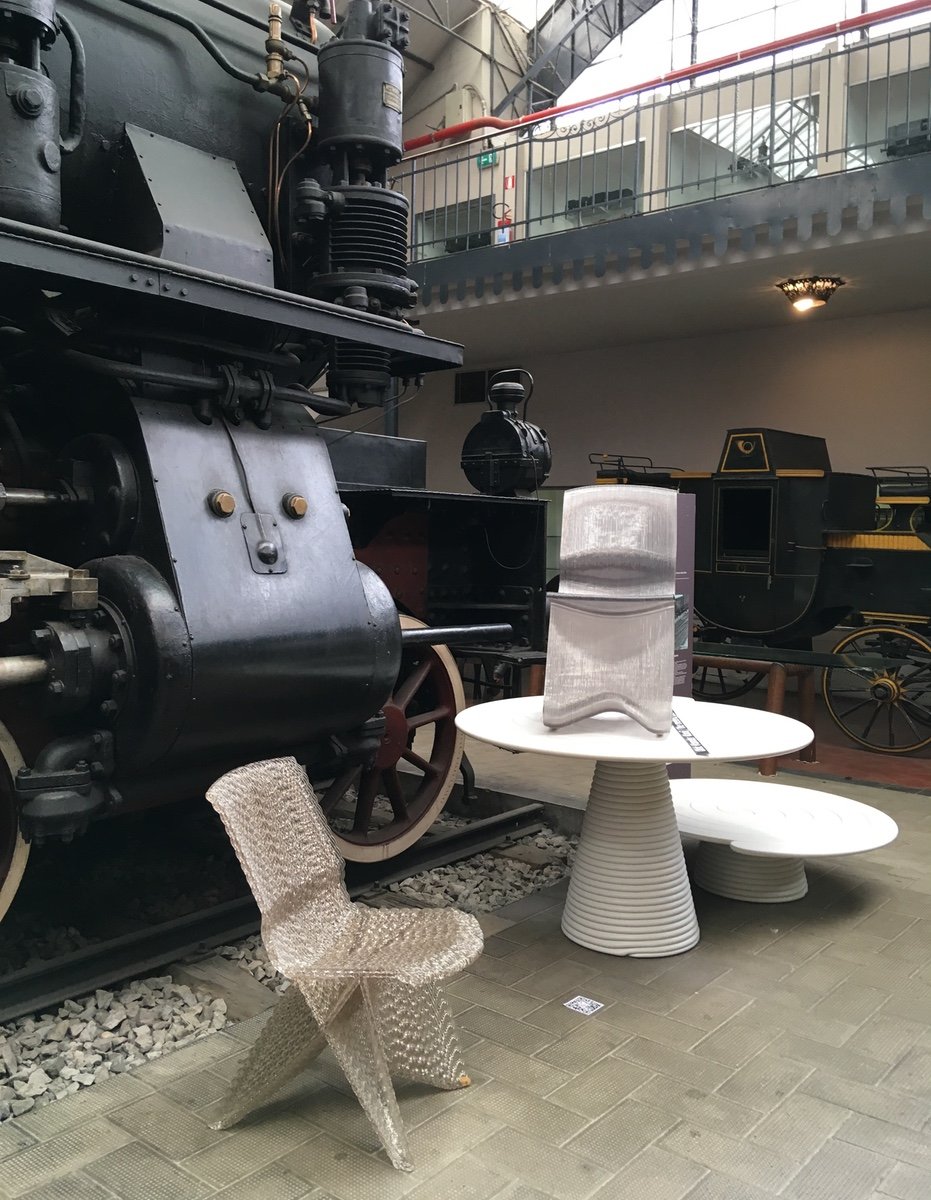 This isn’t to say that only products with sustainable aspirations were powerful enough to inspire. Many beautiful objects were on show at the Hermès, Marni and Wallpaper Handmade shows – the craftsmanship and vibrancy of these designs were staggering. Marni’s Moonwalk event featured chaise longues, toy horses and lamps made by Colombian artisans. Wallpaper’s Handmade featured a circular oak bar, for crafting cocktails, by Chan + Eayrs and Sebastian Cox that was dreamlike. Hermès displayed home accessories within a maze of brick tapestry. 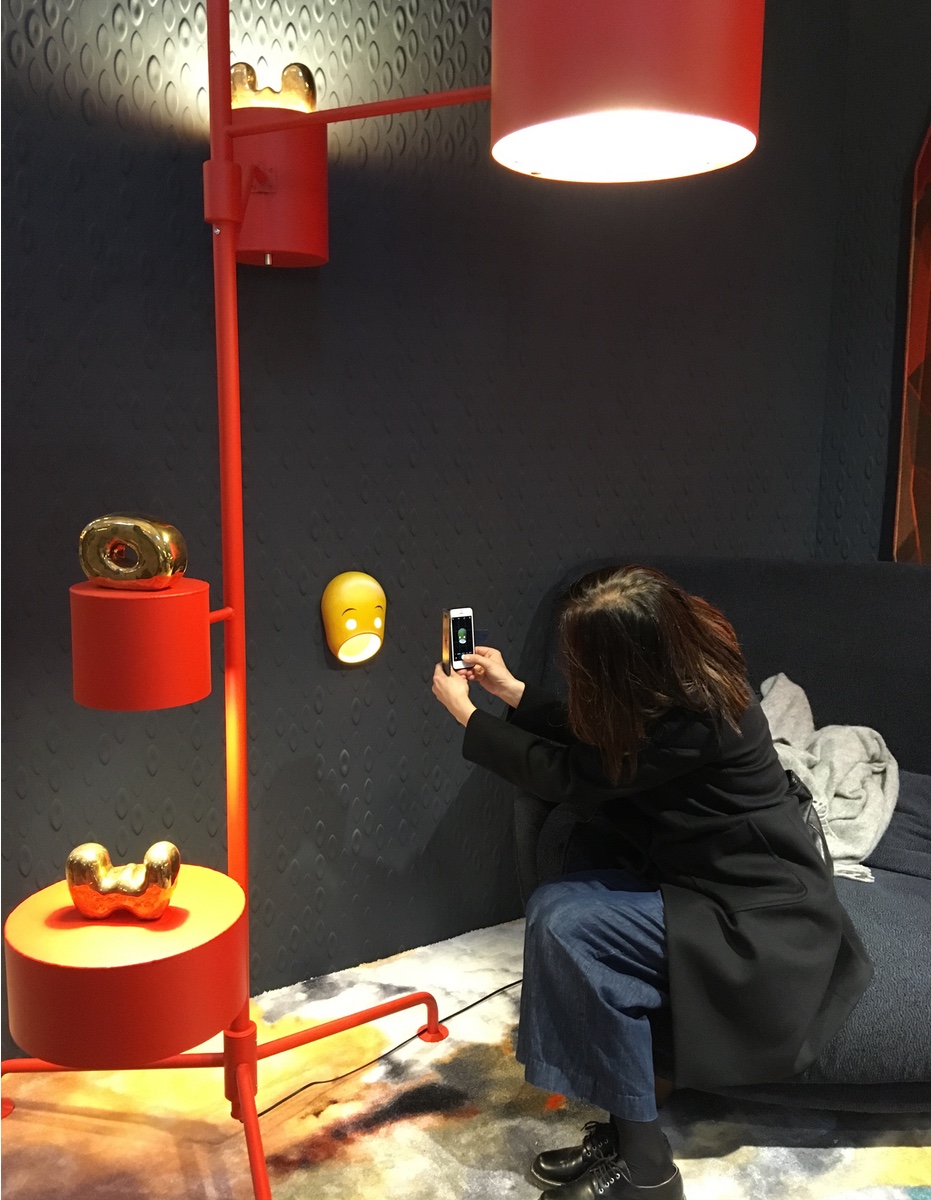 Getting that perfect shot at Moooi

And even the most Instagram-worthy installations had substance and created delight. Benjamin Hubert installed Raytrace for Cosentino inside one of the long-disused train tunnels of Ventura Centrale. His work was a meditation on water (which, like plant life, was a recurring theme). In the making of Cosentino’s Dekton solid surface panels, water is extracted. So, Hubert brought the element back to the source; water drop-like orbs suspended from the ceiling projected liquid shadows onto the white Dekton surfaces that created a narrow passage through the tunnel. Hubert spoke to the gathered crowd about his own deeply felt need, in the madness of the Salone, to get away from all of the furniture pieces, saying he was “tired of the thingness” of Milan Design Week. And his installation was ethereal and ephemeral, definitely in tune with this sentiment. 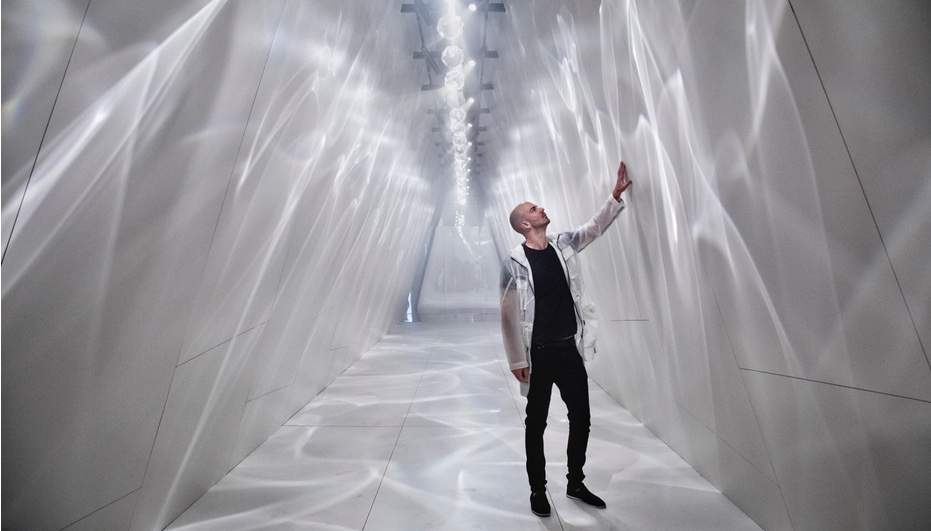 Benjamin Hubert in his Raytrace installation for Cosentino

Just one tunnel down, Todd Bracher and Studio TheGreenEyl also created an experience – Bodies in Motion for Humanscale – that was a whole lot of fun. By dancing on a platform at the back of the space, you created a simple dot matrix version of your movements on a screen metres in front of you – which is what fellow spectators entering the installation would first see before discovering you, the dancer.

But in an atmosphere like Milan Design Week, which eclipses the power of fashion week with its open-to-the-public, citywide presence, you couldn’t get away from the feeling that even these “experiences”, when it came down to it, where products to be consumed, then disseminated through the Internet. This is perhaps an obvious point. And it’s why, for many designers, immersive installations are the most effective way to show new works. Nendo’s luminous display for WonderGlass inside the Istituto dei Ciechi was powerful. Even at the fair, the Design Holding exhibition by B&B Italia, Flos and Louis Poulsen – with its interactive wall of product innovations – was extraordinary. At times, though, the display overwhelmed the pieces being displayed. If you were only into it for the Instagram shot, you might have missed out on the sheer canniness of Nendo’s glass furniture, whose components seemed to nest together through the power of gravity alone. 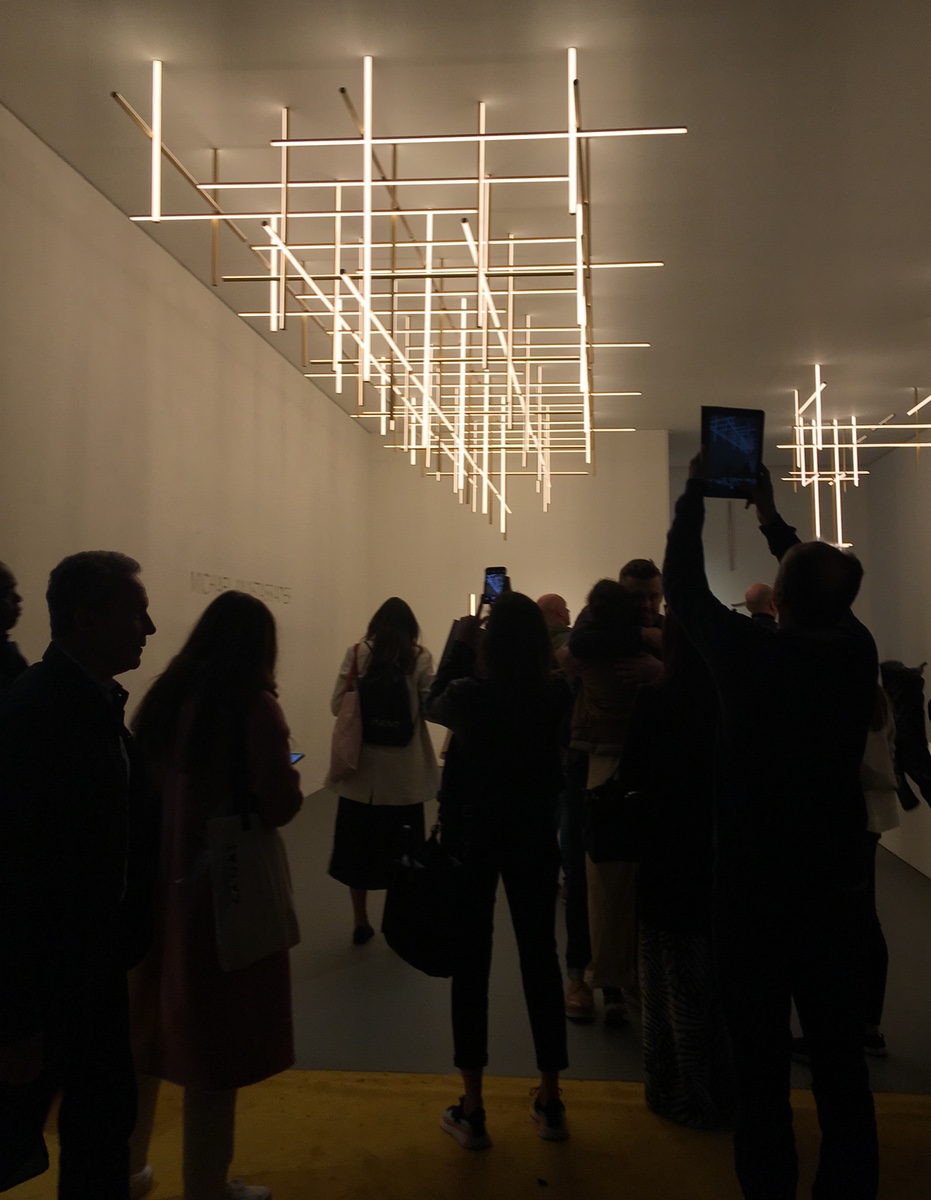 The urge to quickly consume an image and then spit out your own take on it is intense. Maarten Baas nailed the radical subjectivity with which we now consume the world with his “I Think Therefore I Was” piece, also inside Ventura Centrale. It took the shape of a claustrophobic loop of video screens emitting a cacophony of media personalities, talking heads and regular folks being interviewed on film, all of them prefacing their statements with the phrase “I think.” The ultimate – and most redundant – qualifier. 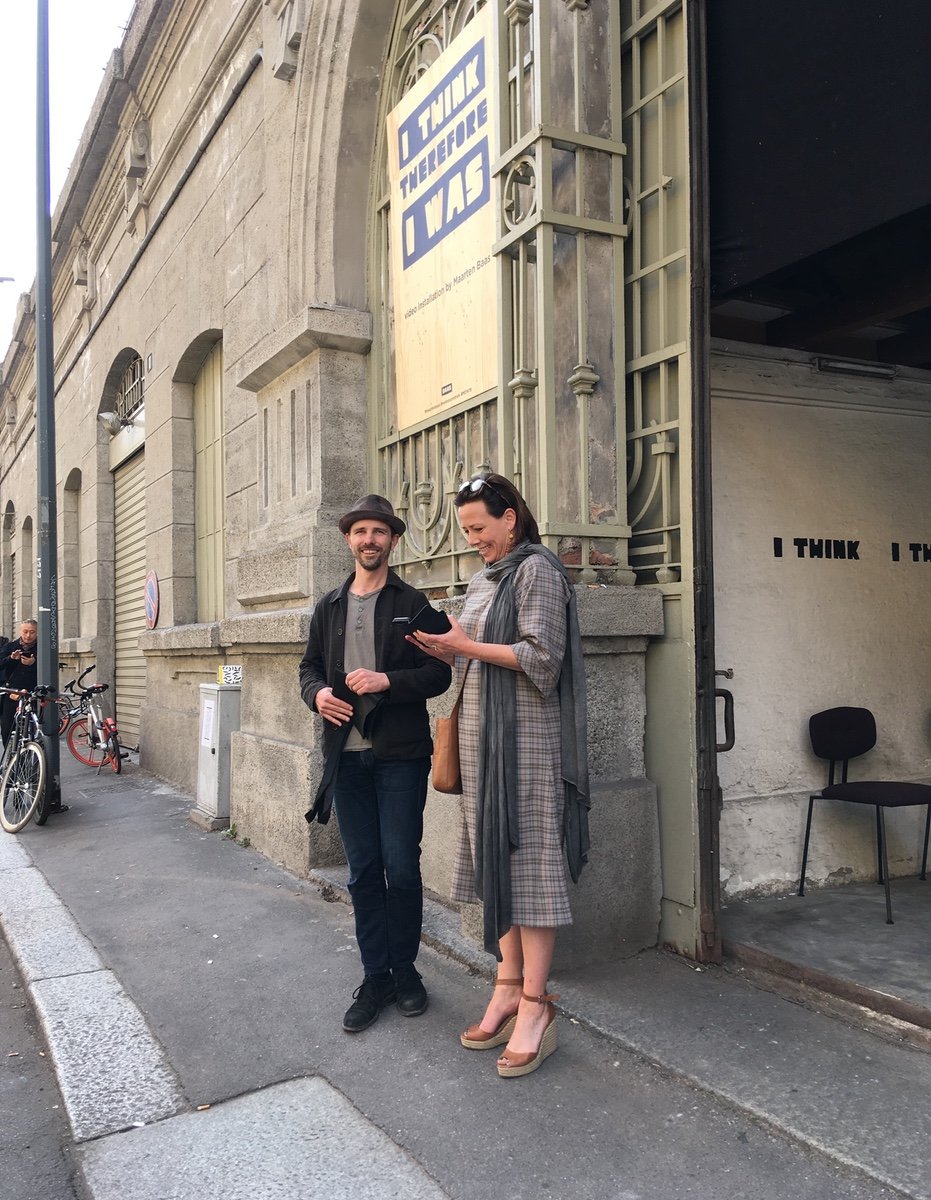 But it’s much better when people truly engage with the thing in front of them. This came through in a surprising way with Gaetano Pesce’s Up chair in the Piazza del Duomo. Back-grounded by the city’s famed cathedral, a monumentally sized version of his anthropomorphic ode to women was speared by dozens of arrows – the designer’s comment on our misogynistic society. Others saw something else. The installation was protested by a group of feminists who felt that the piece itself was misogynistic. They didn’t much care for the fact that the original was being celebrated in a big way for its 50th anniversary or that it made for a great social media post. They confronted it in a real, visceral way. Whether you agree with them or not, the dialogue we create when we talk to each other rather than emit data is perhaps the true power of design.