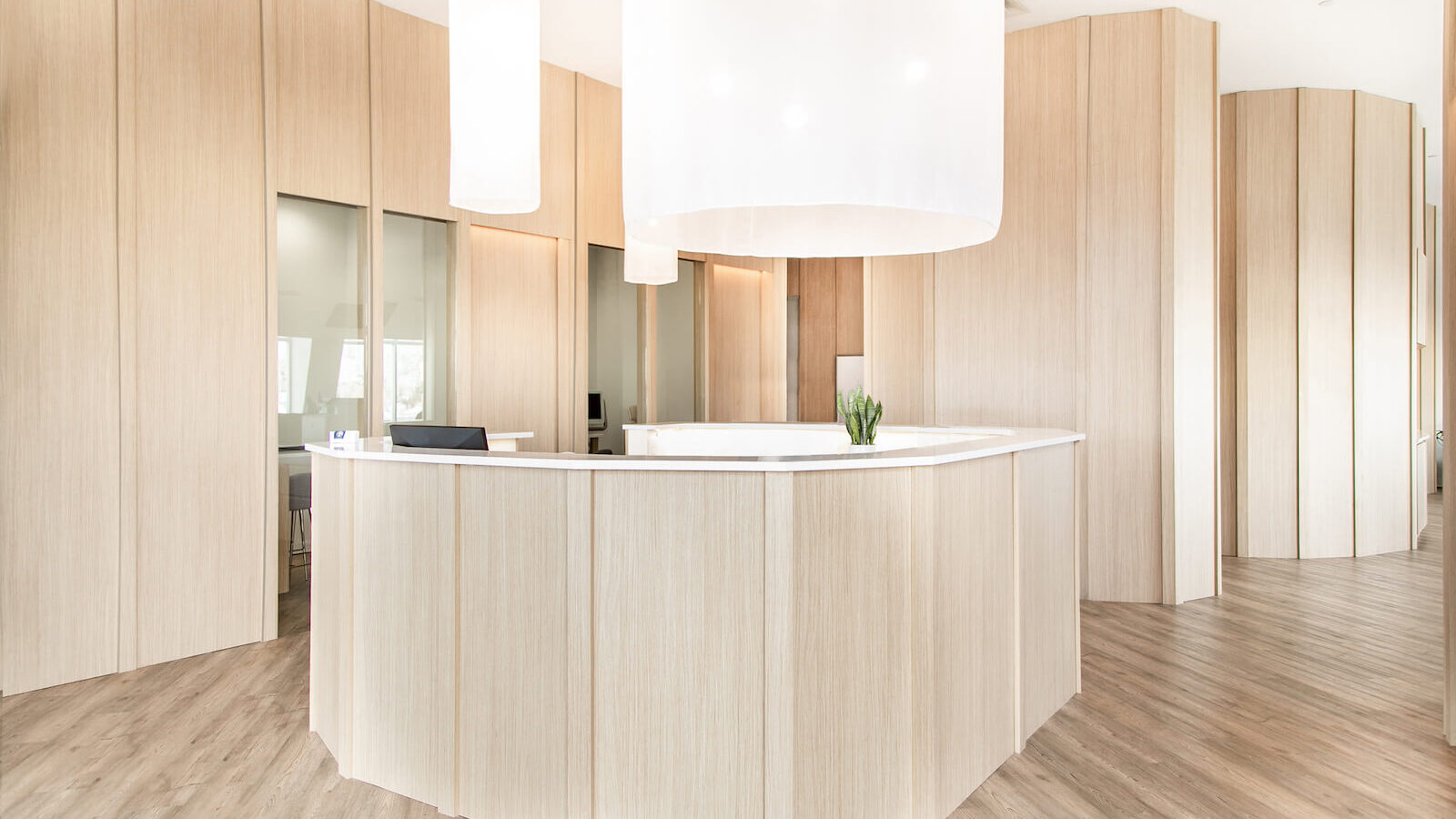 In Alberta, an Orthodontics Clinic Unlike Any Other

By bringing an urban character into a humble interior, architect Mohammad Eimar designs an orthodontics clinic that you’d actually want to go to.

Can an interior reflect the complexity of a city? That was the starting point for Mohammad Eimar, when his brother asked him to design his new orthodontics clinic in Airdrie, Alberta, a small city north of Calgary and a world away from Eimar’s desk at Kengo Kuma’s Tokyo studio. “A clinic is an architectural ambience,” says Eimar, recalling their first conversation. “A space is a space. I thought, ‘I’ll give it a try.’”

Eimar, who could not travel to the site due to the pandemic (Calgary’s Advance Engineering were the architects on the ground), began by approaching the interior design as an architecture project: He interrogated the geometry of the commercial suburban building that would house the orthodontics clinic and made note of its chamfered edges. He compared them with the faceted building frontages you see repeated in aerial shots of bigger cities like Paris and Barcelona. “I imagined the space inside as a continuous field from the outside, connected to the city and its generic spaces,” Eimar says. 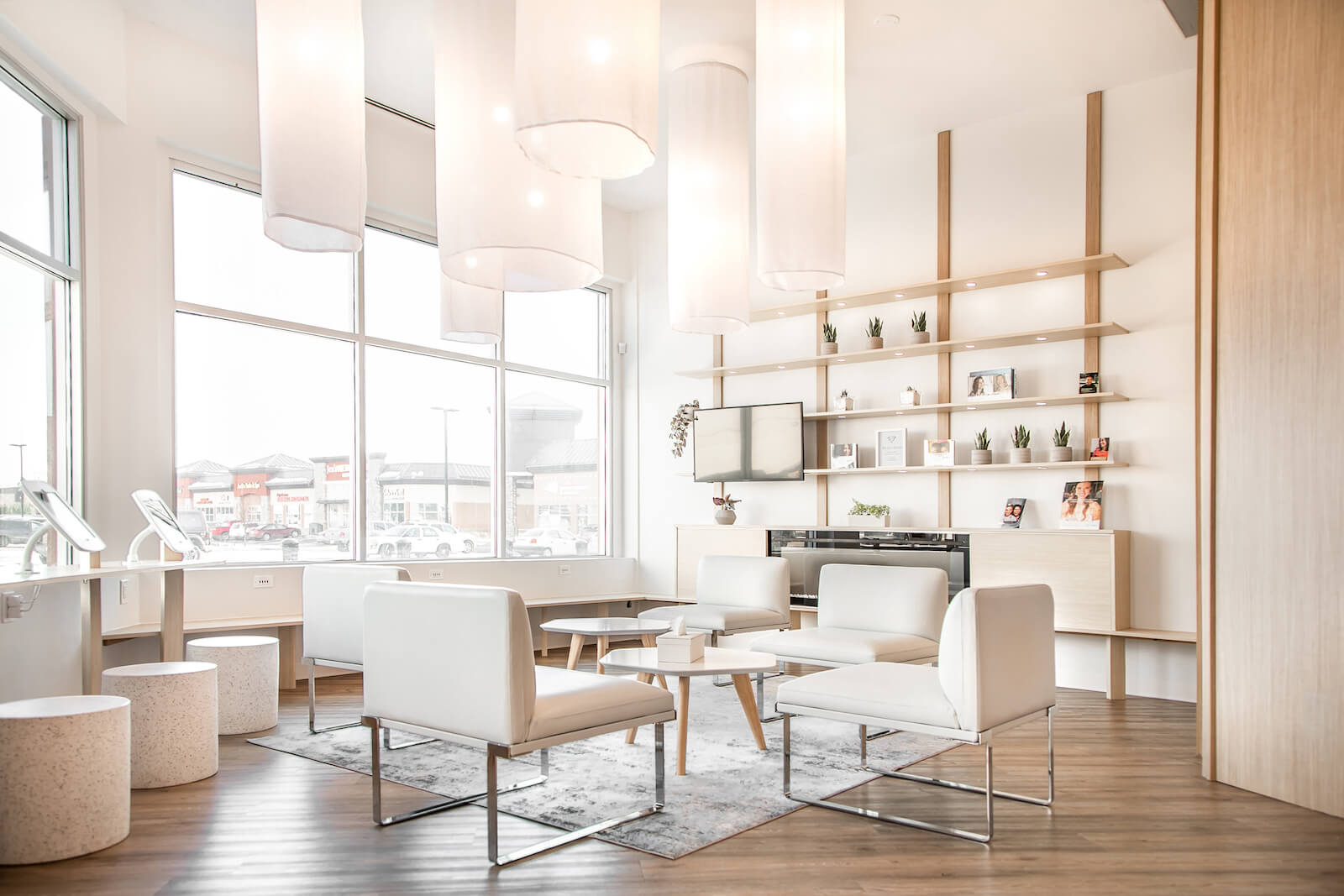 The macro, streetscape lens was thus narrowed to the scope of the interior, which is situated on the building’s ground-floor, where it has the benefit of wraparound windows. The biggest move in articulating the central idea was the use of vertical wood panels throughout; they communicate scale and density while also providing a sense of intimacy and warmth far beyond what one would normally expect from a clinical setting. 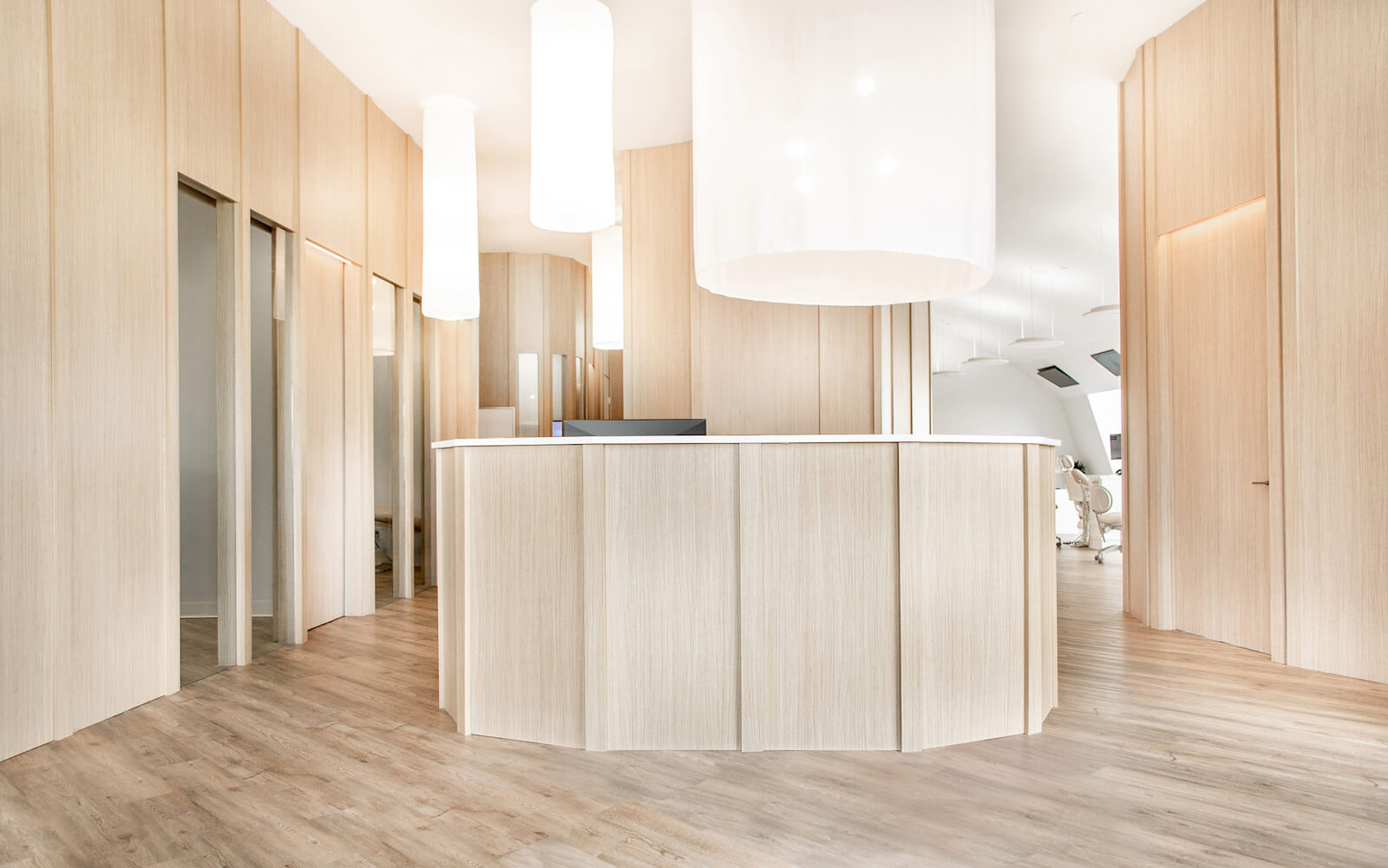 Finished in Wilsonart woodgrain laminate, these panels wrap all of the clinic’s “functions” in curved, faceted enclosures. Eimar, however, approached their design from an anti-functionalist perspective: he wanted the rooms to be flexible and nonspecific in order to avoid the sense of a series of boxes lining a corridor. His is an open and organic layout, in which he sought to give more space back to clients, such as the decidedly hygge waiting area with built-in seating and shelving systems that hugs the front windows. In fact he argued for these generous common areas. “I had a lot of fights with my brother,” Eimar admits. “He was like, ‘I need this room bigger.’ No!” 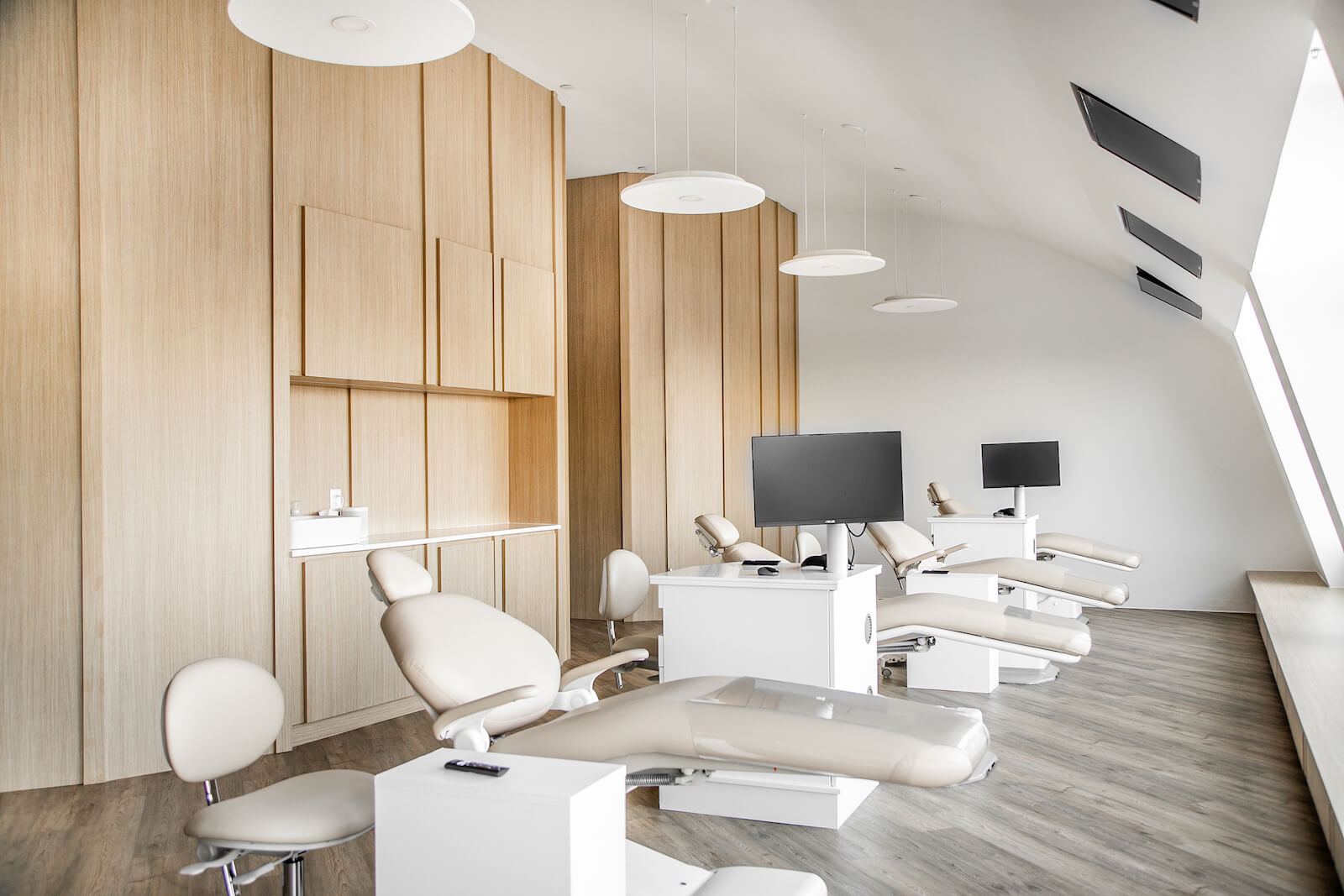 The Eimars are originally from Jordan. Mohammad did his master’s in Japan, then applied to Kuma’s office; his brother studied at McGill then moved to Calgary and decided to open his own clinic. They both ended up pleased with the results of their first collaboration: The office is a fluid 218-square-metre space that provides clients and visitors surprising glimpses throughout. From the reception desk you could see right through to the rear open clinic, where a series of recliners is positioned in front of a wall of windows. Here, Eimar brought the 3.65-metre ceiling down in a faceted arch, curving it gently to meet the windows and make the natural light feel stronger. 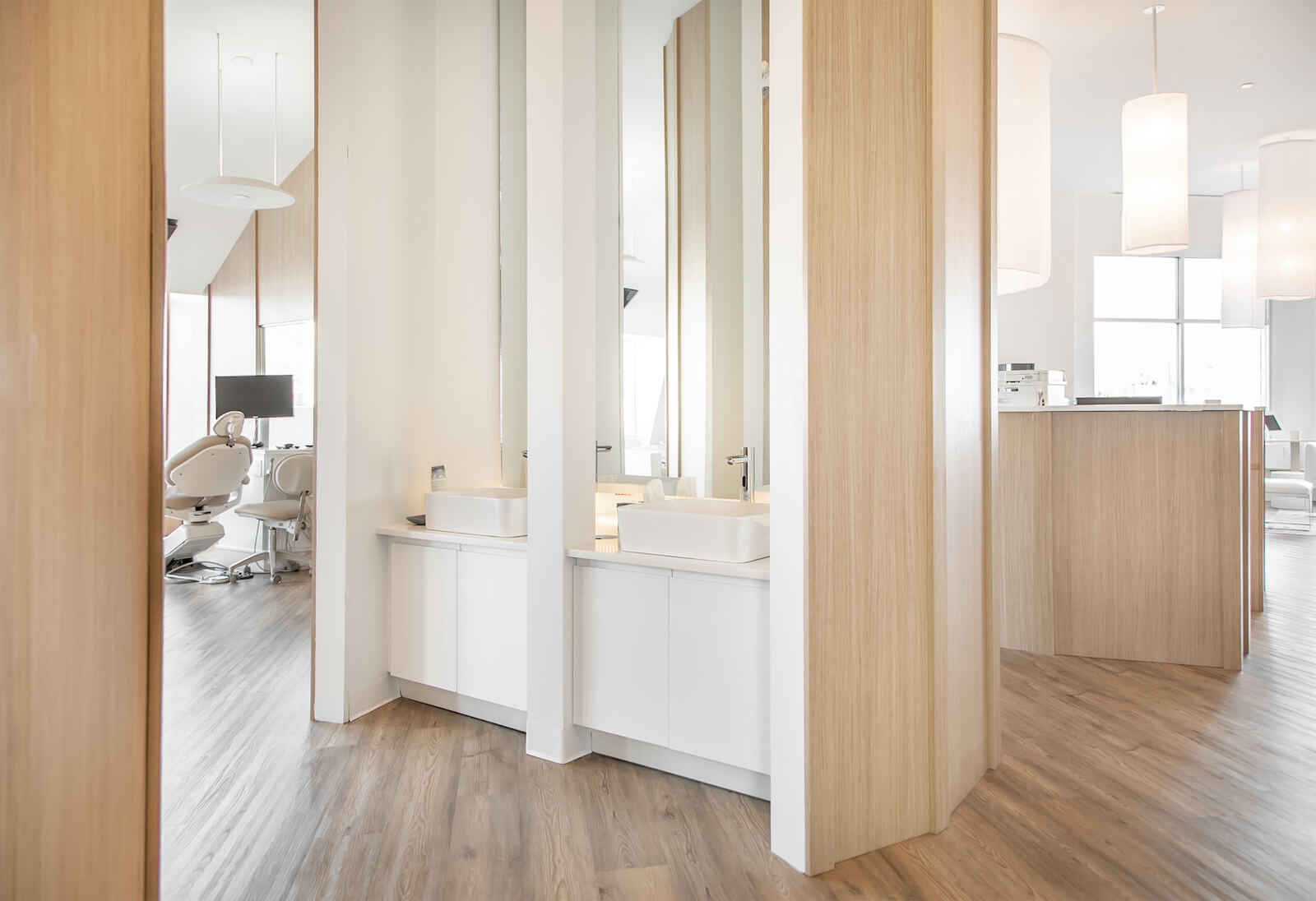 “You read the space as a whole with no clear boundaries between open and closed spaces,” he says. Yet it’s the details, beginning with those wood enclosures, that might be the most pleasing aspect of the project. The recessed lighting that outlines the interior doors and cupboard panels and the facets that read like contemporary moulding – eschewing the forced minimalism of most clinics – all help to evoke a layered aesthetic that feels more like home. Eimar also designed two types of custom pendant lighting that further the residential vibe: cylindrical ones, in a variety of sizes, with polystyrene fabric veils and floating circular plates that provide double-sided illumination above clients’ heads. Who knew an orthodontics clinic could both be so polished and so humanistic? 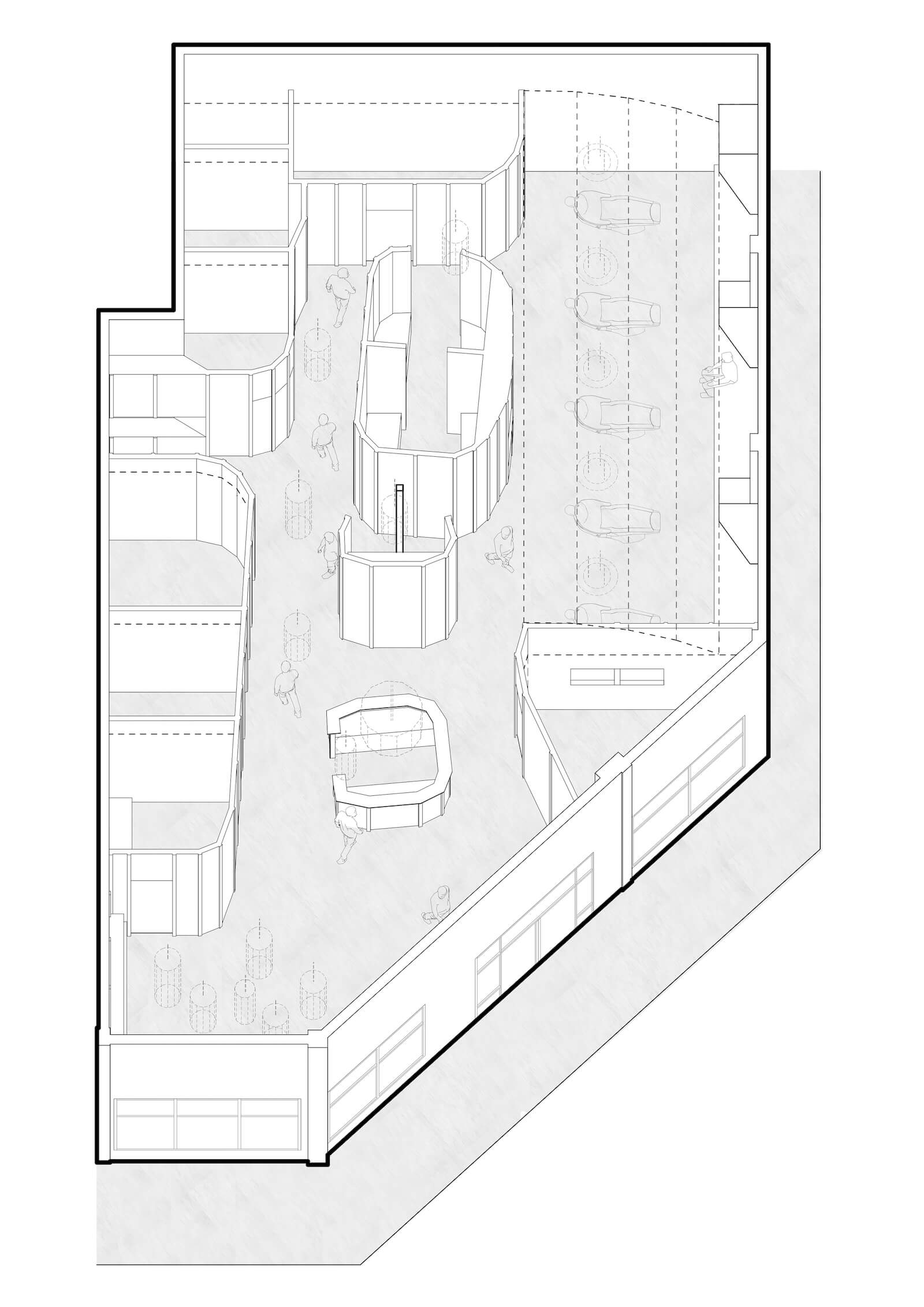 By bringing an urban character into a humble interior, architect Mohammad Eimar designs an orthodontics clinic that you’d actually want to go to.