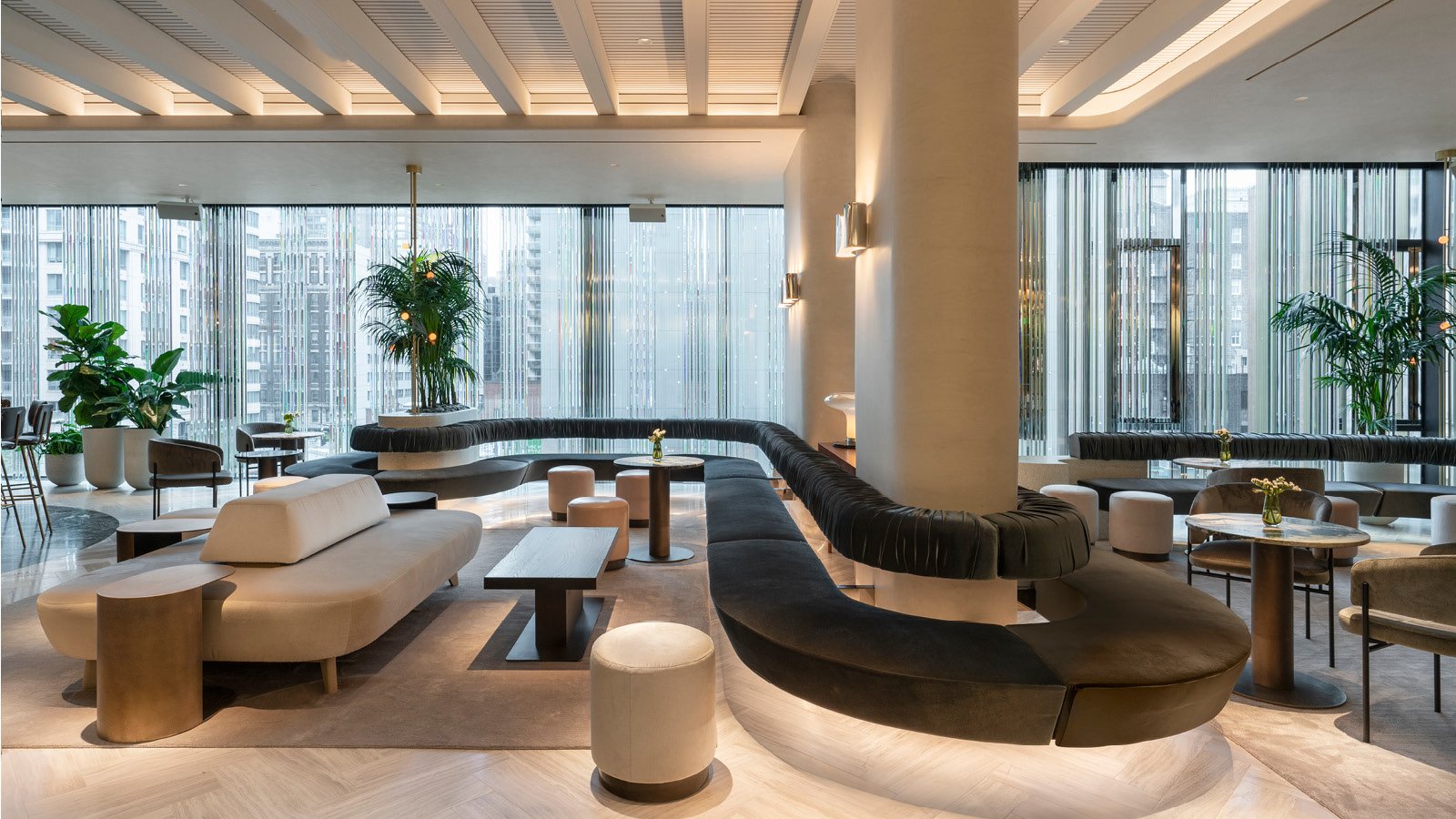 When Andrew Lufty, the president of Carbonleo Real Estate, teamed up with visionary chef Marcus Samuelsson to re-imagine Four Seasons Montreal’s food and beverage spaces, they made the unusual choice of hiring design firm Atelier Zébulon Perron. The studio was well-known for crafting some of the city’s most successful eateries, such as the new Henri Brasserie Française in the renovated Hotel Birks, as well as hospitality spaces in neighbouring cities, like Toronto’s Drake Underground. “But we had not done this kind of luxury hotel project before,” says principal Zébulon Perron.

Yet, the Atelier’s previous experience proved essential in helming the expansive 1,268-square-metre Marcus Restaurant + Terrace, which opened its doors on the third floor of the Lemay and Sid Lee Architecture–designed building in summer 2019. Billed as “Montreal’s hottest new destination to dine, drink and connect,” the lounge, bar, restaurant and terrace were conceived not simply as another spot for libations, but as a dynamic “social square.”

Immediately off the bronze-clad elevator core, guests are confronted with a provocative artwork – a taxidermy king crab inside a case clad in parallel mirrors. (Courtesy of renowned Parisian studio Deyrolle, the piece hints at the infinity effect of the restaurant’s men’s and women’s washrooms.) Just beyond, the reception and day lounge frame the remaining environs, which were conceived as a “sequence of spaces” that transition across the course of the day.

Set against gradient blue wallpaper by Brooklyn’s Studio Cope and a datum of white oak slats, a long banquet provides a quick rest stop on the way to the day lounge. Here, additional sweeping banquets with integrated lighting carve niches within the space before terminating in their sculptural terrazzo anchors.

This rich material palette, which includes a herringbone wood floor, is carried into the sumptuous details: the custom fixtures by Montreal darlings Lambert & Fils that dot the lounges and other spaces, as well as in a circular bar framed by forest-green marble that exudes art-deco opulence. Says Perron, “We wanted to make sure every moment of the day had a space that made sense for it: the transition from morning to lunch, then evening and then well into the night.” 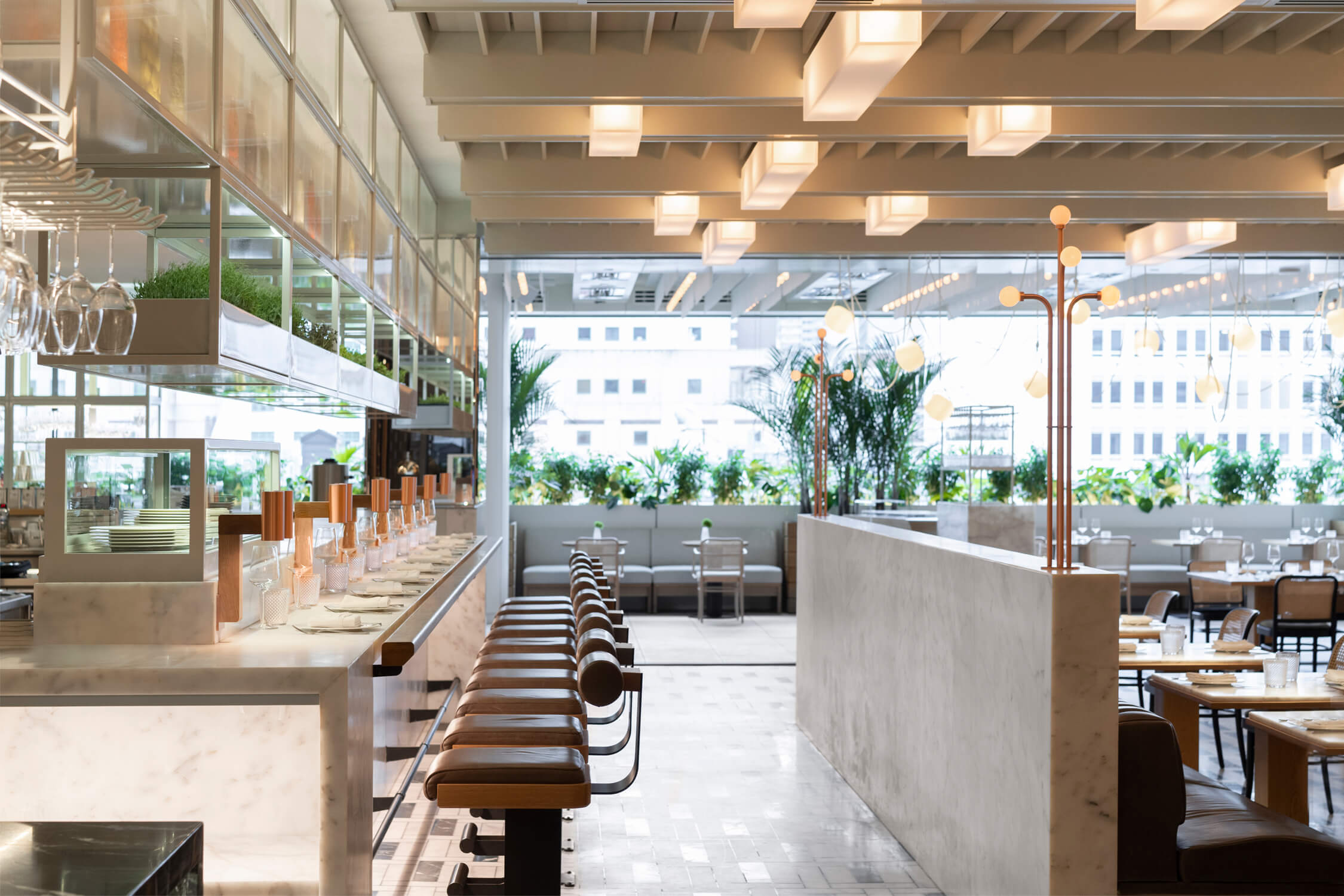 Nearby, the main dining room takes the shape of a more traditional brasserie – replete with curving wood and leather banquets, rattan seating, monolithic marble partitions and delicate copper lighting fixtures that help frame views into workings of the open kitchen.

The expansive terrace immediately off the space is weatherized, “which is important if you live in Montreal,” Perron laughs, and provides service 365 days a year. Populated with a jungle of plants in the warmer months, the patio also allows for a unique vantage of the larger-than-life mural of late musician Leonard Cohen in the city’s Old Port.

Aside from accommodating patrons throughout the day, these lounges were also organized to connect out-of-towners with one another and with locals. “We planned the space a little bit tighter so people would be closer together,” Perron adds. “We laid out the space in way that was conducive to social interaction, like striking up a conversation with a stranger.”

This social-minded planning extends further into the dim night bar, tucked away in a corner and completing the sequence of lounges. This space is set off from the surrounding lounges with a moody palette of charcoal carpeting, rich velvet and leather upholstery; it also boasts deep green marble as the main surface option for tabletops, built-ins and an undulating bar. A custom wallpaper with a lush forest motif envelops the walls and ceiling as a nod to the foliage of nearby Mount Royal park.

As Atelier Zébulon Perron’s inaugural entry into luxury territory, Marcus is a thoughtful debut founded on a deep understanding of the local community as well as the shifting terrain of the hospitality sector at large. “I think the hotel industry recognizes that there is a need to activate lounges as well as food and beverage spaces, because they are part of the overall experience, and a need to somehow connect with the city,” says Perron. “There’s also good reason to make sure that the patrons of these spaces are both locals and guests at the hotel so that they can foster a dynamic social scene.”