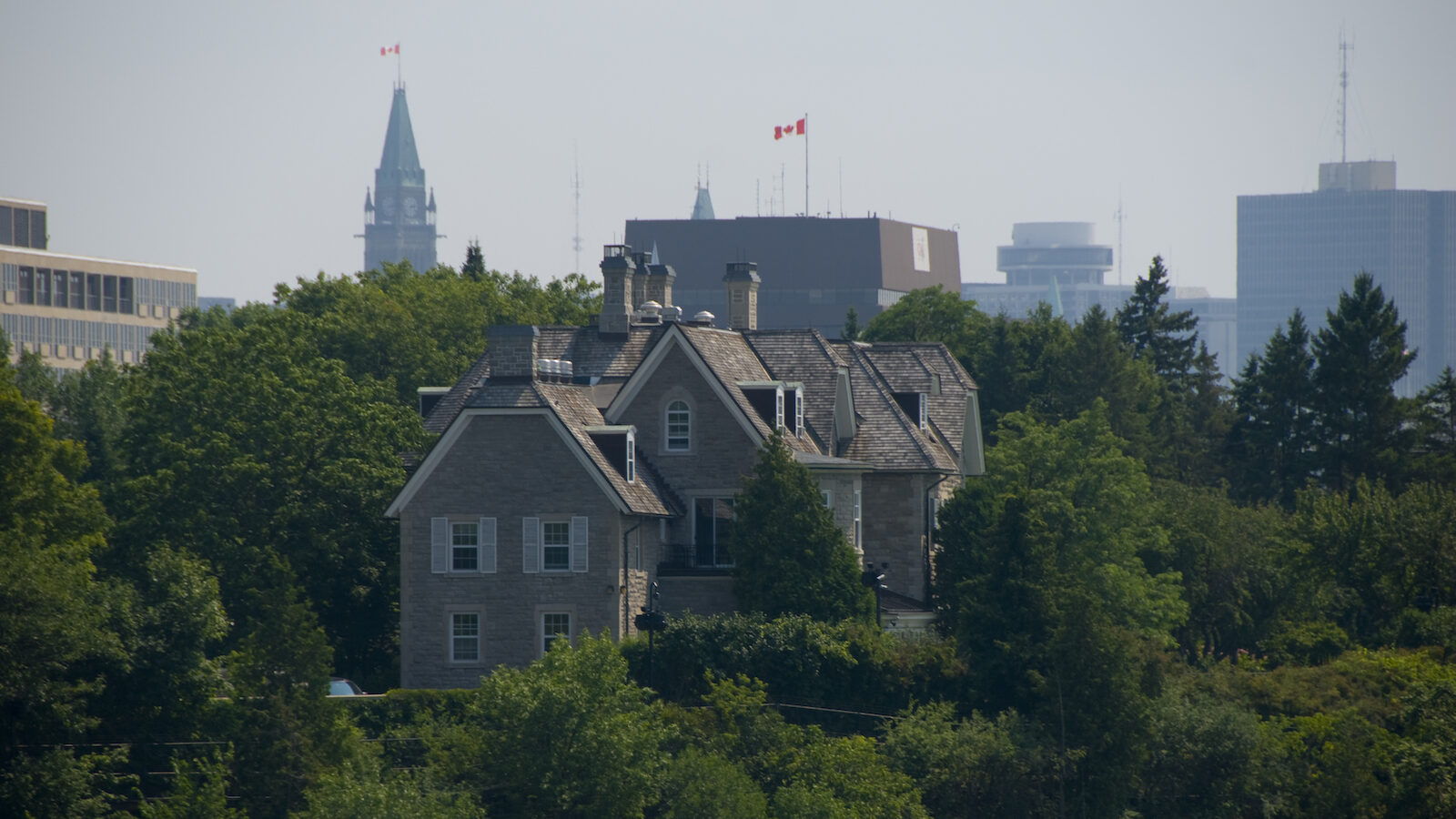 The National Capital Commission has announced that the Prime Minister’s derelict official residence will be closed for the indefinite future.

It’s not the White House or 10 Downing Street. Compared to its American and British counterparts, the official residence of Canada’s Prime Minister doesn’t draw instant — let alone international — name recognition. In fact, the house at 24 Sussex Drive hasn’t served as a home since 2015, when the long-neglected property was deemed unsuitable for Justin Trudeau and his family. And after seven years of sitting more or less empty, Canada’s National Capital Commission quietly announced last week that the derelict property is being closed for health and safety reasons. How did it get to this?

Built between 1866 and 1868 by parliamentarian and lumber baron Joseph Merrill Currier, the grand Norman Revival house in the capital’s New Edinburgh neighbourhood was eventually expropriated by the federal government in 1946 and refurbished into an official residence for the head of government four years later. In 1951, Louis St. Laurent became the first Prime Minister to take up residence. And in the decades since, every Prime Minister — other than Kim Campbell, who served only a four-month tenure — lived at 24 Sussex Drive, until Trudeau took office in 2015.

By the time Trudeau became Prime Minister, the 34-room, 1,115-square-metre mansion was in calamitous shape. Following the 1950s retrofit, the limestone-clad house has never been extensively renovated — though Justin’s father, Pierre, added a swimming pool building in the early 1970s. In 2008, an auditor general’s report outlined the need for “urgent” repairs to 24 Sussex, citing problems with plumbing, electrical systems, windows and heating. What’s more, the home lacks a sprinkler system or central air conditioning, and its generous helping of mid-century asbestos insulation was never removed or remediated. (In 2005, then–Prime Minister Paul Martin joined comedian Rick Mercer on a trip to Canadian Tire to buy plastic to cover the drafty windows).

On November 17, the National Capital Commission (the Crown Corporation that manages the property) announced that 24 Sussex Drive is officially being shut down. And while the asbestos — and the thoroughly obsolete mechanical, heating and electrical systems — will finally be resolved, the property’s long-term future is more uncertain than ever. According to the NCC, 24 Sussex would require over $36 million to thoroughly renovate, or approximately $40 million to demolish and rebuild. Where the money would come from is another question.

Unlike the White House or 10 Downing Street, 24 Sussex Drive has never served as an official workplace for the head of government. While state visits and meetings were often hosted at the house, the Prime Minister’s staff and office are located on Parliament Hill, leaving the home a largely residential address. This reality is part of the reason the house isn’t more predictably funded by the federal government. (And unlike the White House, it doesn’t have a robust non-profit fundraising arm.)

More fundamentally, Canada’s Prime Ministers have generally shied away from spending public money to renovate their private, 34-room home: It doesn’t take a political genius to see the risk of that. And the Presbyterian modesty of Canadian political life plays a role too. Writing in the New York Times in 2018, Ottawa-based journalist Ian Austen contextualizes the issue for an international audience, arguing that “there’s a parsimony among Canadians when it comes to politicians spending money on themselves that’s almost alien to Americans.” And he’s probably right. In contrast to the bombast and jingoism that often inflects discourse south of the border, Canada’s political theatre is rooted in equally performative displays of modesty. (Former Prime Minister Brian Mulroney once refused to get into a taxi because it was a Cadillac, with the driver hastily paid off so that an appropriately unassuming Plymouth could be summoned instead).

In 2022, the question of 24 Sussex takes on greater complexity. As the future of the Prime Minister’s official residence hinges on an eight-figure retrofit, the nation’s housing crisis is more acutely felt than ever. Despite a much-vaunted National Housing Strategy, new affordable housing has been desperately slow to arrive, while rapidly rising rents and interest rates are putting a greater strain on middle-income households. For Justin Trudeau, the optics are worse than ever.

When Pierre Trudeau built a pool for his family at 24 Sussex Drive, his government was also building tens of thousands of social housing units per year. And while his son now resides at the much smaller and comparatively modest Rideau Cottage, the construction of public housing has effectively stopped since the 1990s, leaving behind rising homelessness and housing insecurity — and a golden age for boomer homeowners and real estate investors. Today, the decaying state of the house comes across as a sort of cosplay of fiscal austerity, or a sly iteration of what Mark Fisher called “capitalist realism,” wherein alternatives to the status quo become all but impossible to imagine. To wit: How can we tackle the housing crisis when even the Prime Minister’s residence is falling apart?

It shouldn’t be that complicated. While the retrofit of 24 Sussex Drive would come with (at least) a $36-million price tag, the political and cultural value of an official residence is tangible. In its heyday, the likes of Winston Churchill, John F. Kennedy and Richard Nixon paid visits to the home, which served as an informal yet integral venue for Canadian diplomacy. Indeed, it’s why most countries around the world have an official residence — and often multiple properties — for this purpose. As a cultural symbol, the home can also serve as a national icon, and, more importantly, as a site of civic engagement and protest. (In 2007, for example, Greenpeace activists chained themselves to the front gates at 24 Sussex).

What’s more, a renovation could be a showcase of Canadian design. As Elsa Lam wrote in Canadian Architect in 2019, the opportunities abound. “Is there a way to render the residence net-zero energy and net-zero carbon, showing how these goals can be accomplished within a 150-year-old structure? What about holding an open architectural design competition, soliciting approaches that give the house a fresh identity firmly rooted in its heritage?”

Of course, the house is the easy part. Solving the housing crisis is much harder. From exclusionary zoning to financialization and global capital flows, a complex reality shapes today’s high rents and million-dollar properties. But the government used to have a simple answer — building housing. “From 1965 to 1990, 10 per cent of total housing production was non-profit, public or co-operative,” writes the Wellesley Institute’s Greg Suttor. Thanks to federal funds, an average of 16,000 non-profit or co-operative homes were completed each year between 1973 and 1994. From 1994 to 2016, the annual average was reduced to 1,500 homes a year, following a drastic cut to social housing in Paul Martin’s 1993 budget.

It was a solution that addressed both the reality and the optics. Today, the National Housing Strategy relies on a more convoluted web of public subsidy for private development, with precious little to show for it so far. To my mind, it’s this reality that makes the retrofit of the Prime Minister’s official residence so politically unpalatable. Although the project would only cost the public a dollar per capita, it constitutes the type of political capital that the government can’t afford to spend. In the meantime, we’re left with a national embarrassment at 24 Sussex Drive. For now, I think it’s an embarrassment we deserve.

The National Capital Commission has announced that the Prime Minister’s derelict official residence will be closed for the indefinite future.