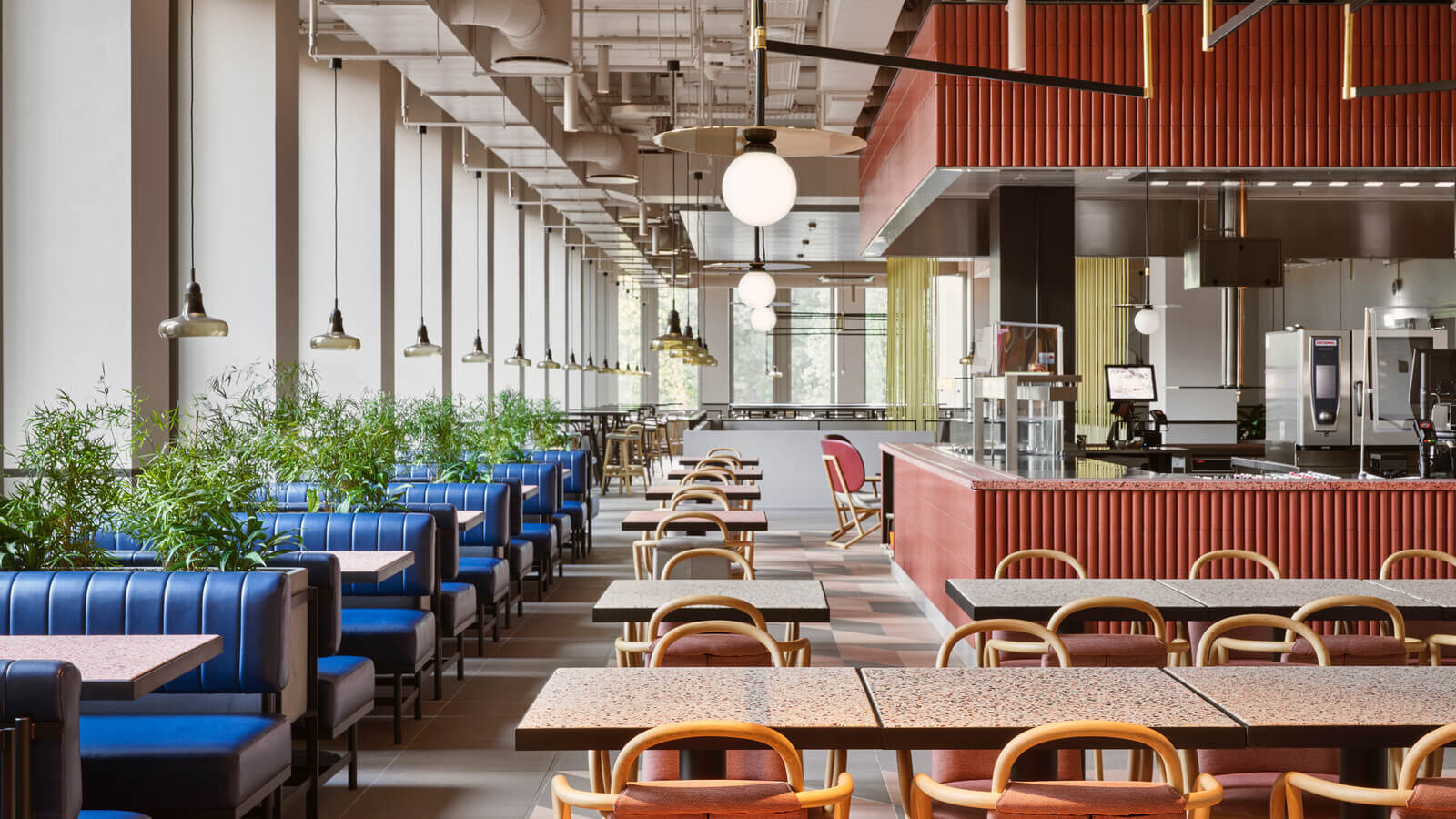 The Milan-based designer brings her distinct aesthetic and expansive portfolio of furnishings to a two-storey cafe and lobby in the German city’s bustling core.

As Germany’s economic capital, Frankfurt has a reputation as a business town, one better known internationally for its soaring (by European standards) skyscrapers than its hospitality culture. Enter Patricia Urquiola. In the heart of the city’s financial district, the acclaimed designer has introduced a vital dose of warmth and vibrancy to the public-facing spaces at the foot of a soaring new office complex.

Encompassing Chez Marie — a two-storey cafe and cafeteria — as well as the shared main lobby to the newly completed Marienturm and Marienforum towers, the elegant interiors are replete with a host of unique features alongside hallmark designs from Urquiola’s illustrious career.

On the cafe’s first floor, just beyond groupings of the designer’s Californian modern-inspired Silver Lake chairs for Moroso and the plush Husk Sofa for B&B Italia, sits Chez Marie’s graphic grab and go bar. Comprised of a range of green, white, burgundy and blush-coloured stone elements organized in a chevron-like pattern, the counter anchors the airy space, employing the Earthquake 5.9 floor and wall inlay designed for Italian marble company Budri in 2013. Immediately behind, slender metal shelves reference the linear bronze enclosure of the grand stair leading to the floor above.

Like the intimate cafe below, Chez Marie’s expansive second-floor cafeteria is conceived “as an inspiring environment to feel [as] comfortable as at home,” according to Urquiola. To achieve this, the designer created a trio of rectilinear food counters clad in undulating tiles that each offer a different cuisine. “The concept for this space,” she says, “is to represent the culinary diversity in the interior design, creating three thematic areas in different colour moods.”

In addition to the cafeteria, Urquiola and her team also crafted a warm, inviting lobby to the towers. A vertical rhythm of rectangular ash blocks (“an enjoyable play of pixels,” says the designer) dances up the soaring 17-metre high ceiling, offering a muted backdrop to the suspended metal grids that appear to float above two dramatic terrazzo- and metal-clad reception desks (each serving one tower respectively).

This, according to Urquiola, creates “a strong focal point for people from the street and from inside the building.” Nearby, welcoming compositions of Urquiola-designed furnishings — such as the Love Me Tender sofa paired with the Fishbone and Shanghai tables (all produced by Moroso) — offer a moment of respite for visitors. 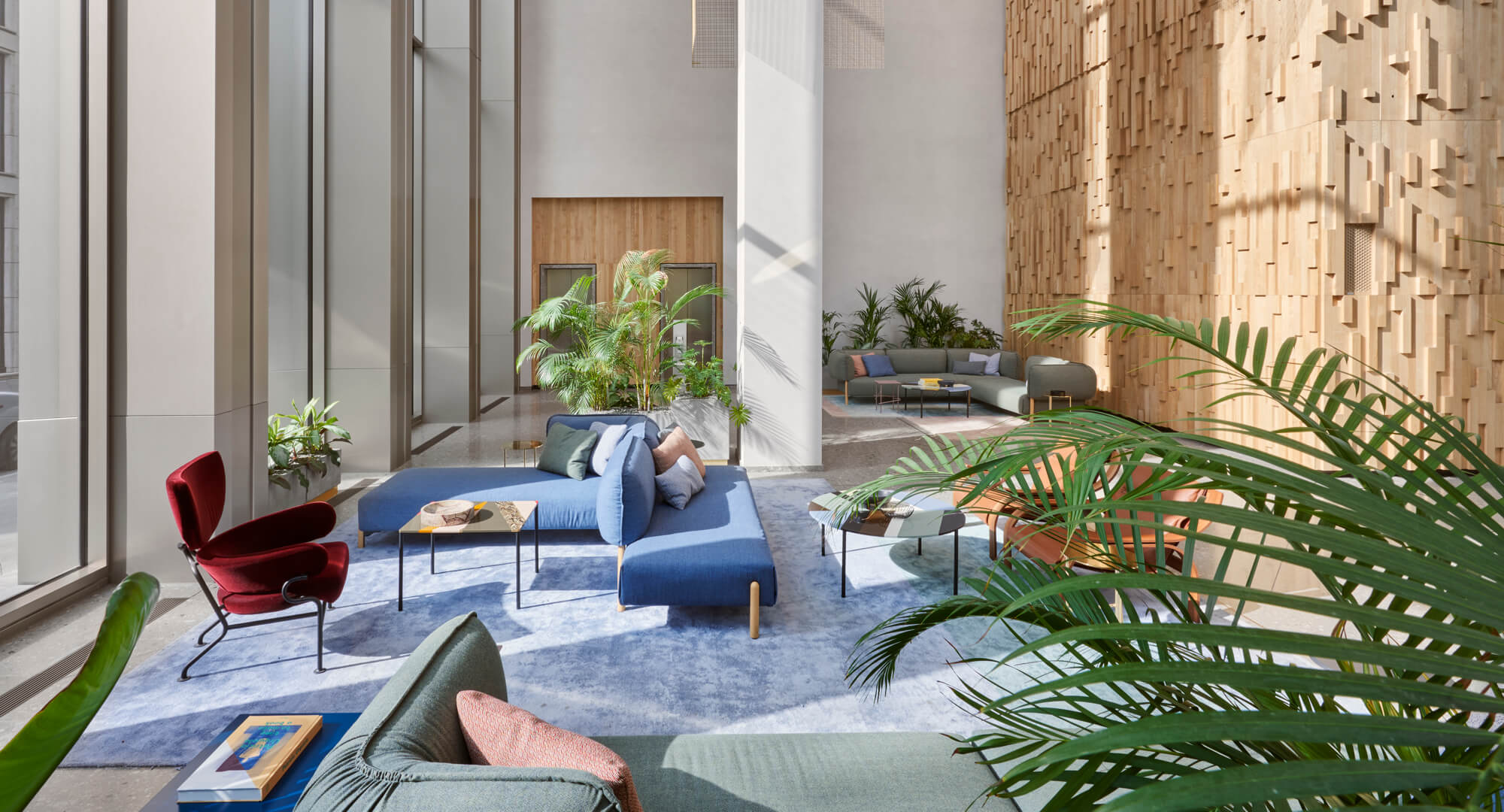 “The lobby is treated as a transit zone between the working environment and nature,” she says. “Mixing materials such as natural wood, stone, marble, metals and combing unique patterns and textures, reflects the merging of these two environments.”

A refined approach to detailing also continues from the eatery to the lobby, with thick terrazzo bands creating graphic portals into each elevator. A subtle metal inlay, too, animates the floor with darting geometric forms. With her signature perspective, Urquiola brings her Spanish-by-the-way-of-Milan flair to the German city’s bustling heart. The result is a vibrant new place to “pause, to work while eating, to eat and to share time with others.”

The Milan-based designer brings her distinct aesthetic and expansive portfolio of furnishings to a two-storey cafe and lobby in the German city’s bustling core.