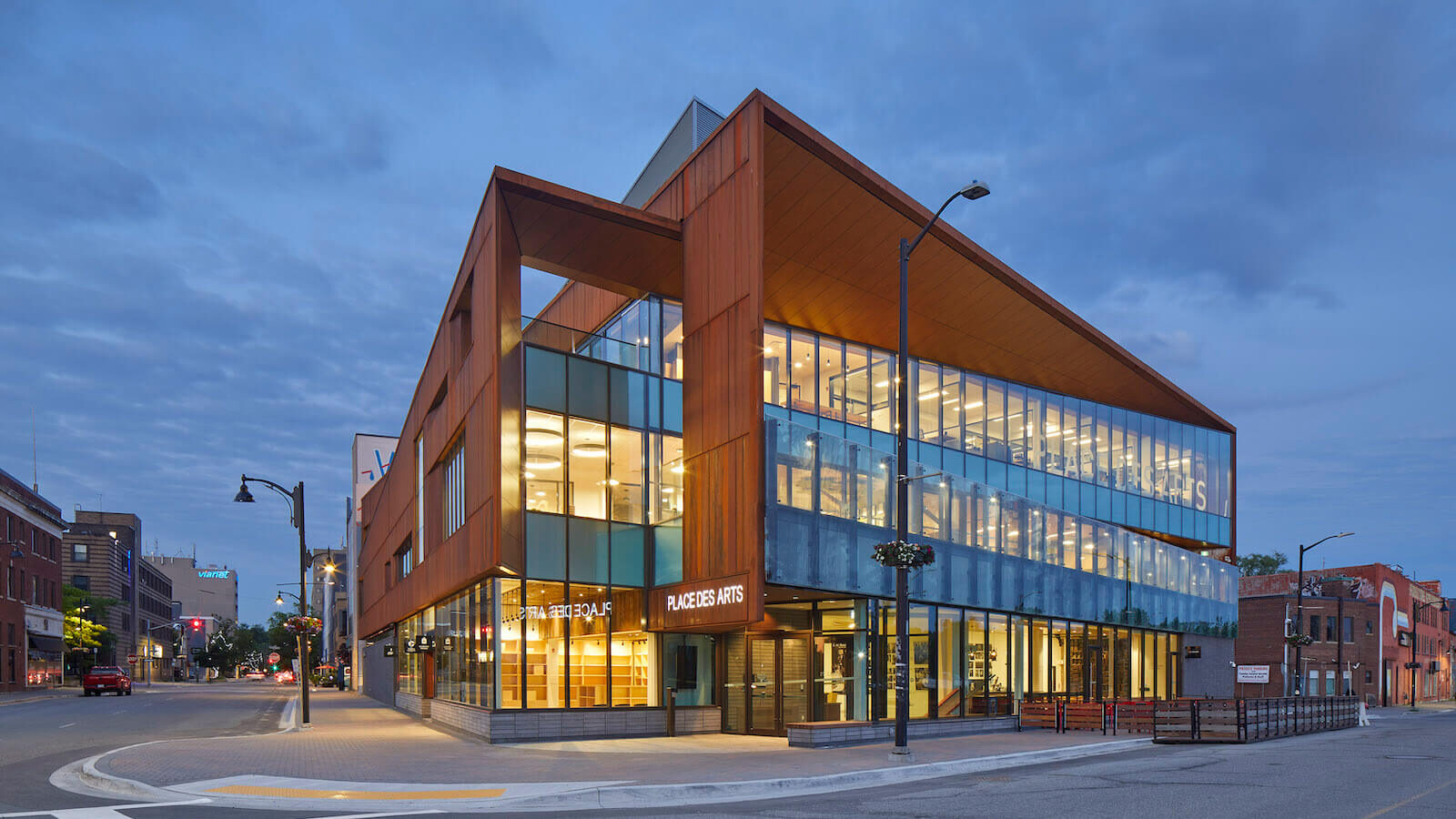 In Sudbury, a Civic Beacon for Northern Ontario

Situated between Sudbury’s downtown and a major rail corridor, the Place des Arts strikes an almost brash pose. Clad in weathered steel, its intersecting, angular volumes culminate in a broad wall of glazing that boldly announces its presence to the city. Inside, however, this new cultural centre for Northern Ontario’s francophone community trades grand gestures for an efficient and compellingly urban program that grounds its venues and amenities within the region’s rich local history.

Designed by local firm Bélanger Salach Architecture and Toronto-based Moriyama & Teshima Architects (MTA), the Place des Arts originates in a 2008 proposal from the “Regroupement des organismes culturels de Sudbury,” a coalition of seven local francophone arts organizations. Opened in April of this year, the facility – which consists of a shared office space for the original institutions alongside a cultural hub — is the first such Franco-Ontarian institution in the province. 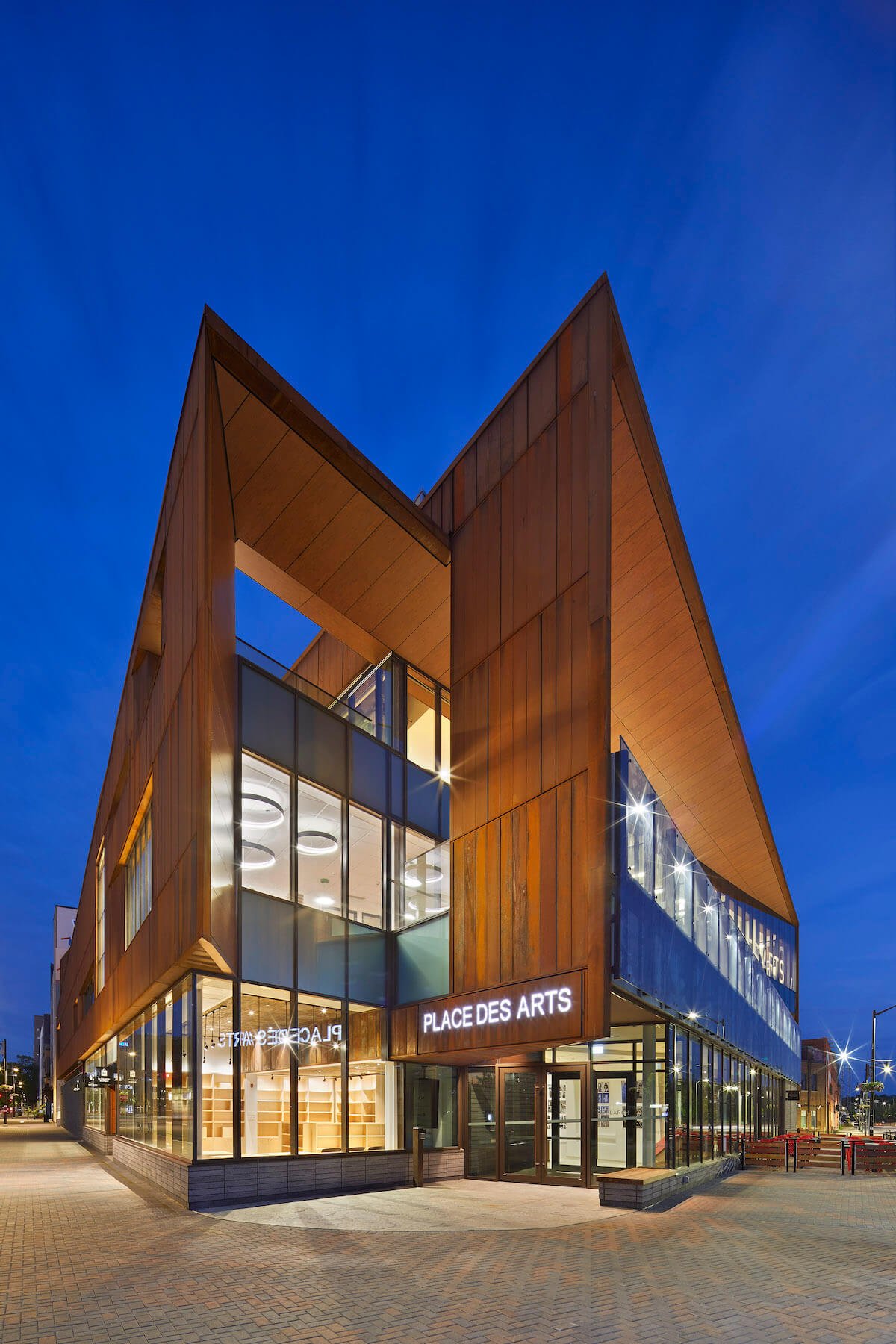 This mix of aspirational pride and grounded history is fertile ground for generating a complex design. Take the weathered steel façade, with a deep red texture befitting its historic, industrial surroundings. “We shared an interesting desire with the clients for the building to carry some patina,” explains Brian Rudy, Partner-in-Charge at MTA. “We wanted the building to feel old, aging – like it’s always been there.” 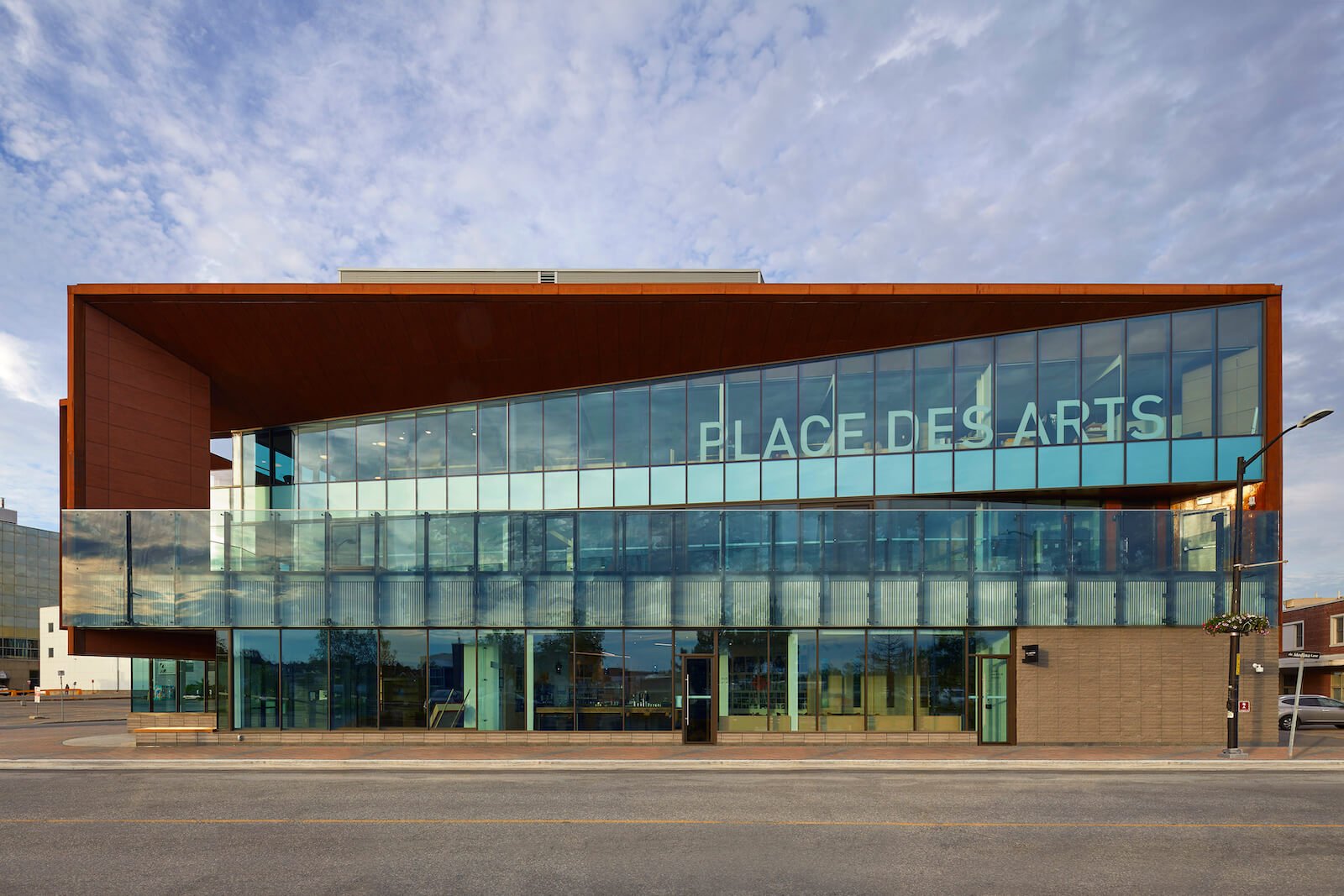 At the same time, the Place des Arts announces itself with a sharp formal gesture — likened to an elevated megaphone. “The clients wanted Sudbury to know it was there, and it still wanted to be respectful,” says Rudy. “The façade is these two pieces that are shifting and interlocking, and I think that’s powerful. It’s a rising form along Larch Street, an uplifting gesture.”

Inside, a curved wall in the lobby conceals two major theatrical spaces, steps from the front entrance. One is a multipurpose rehearsal and performance black box, Le Studio Desjardins, designed to be ready for nearly any event.

The other, La Grande Salle, is a more formal proscenium-style hall with seating wrapping closely around the stage (180 at ground level and 118 in a large balcony overhead). Jean-Gilles Pelletier, Executive Director at the Place des Arts, says the space creates a remarkable closeness – and not just for the audience: “The performer, right at the front of the stage, they’re feeling completely immersed, completely surrounded by the crowd.”

Like Le Studio Desjardins, La Grande Salle is extremely versatile. “There’s an extensive catwalk system up above the theatre, creating the ability to change lighting in real-time, change the acoustic curtain and acoustic setting of the space,” explains Rudy. “It’s quite a machine.”

Complementing these cultural spaces are additional programs supported by the Place des Arts institutional coalition, including a white gallery space managed by the Galerie du Nouvel-Ontario and a soon-to-be-complete bookstore. Facing the street, a bistro run by Patrick Lajoie also contains another of the facility’s auxiliary performance spaces, replete with appropriate technical hookups for a variety of uses. 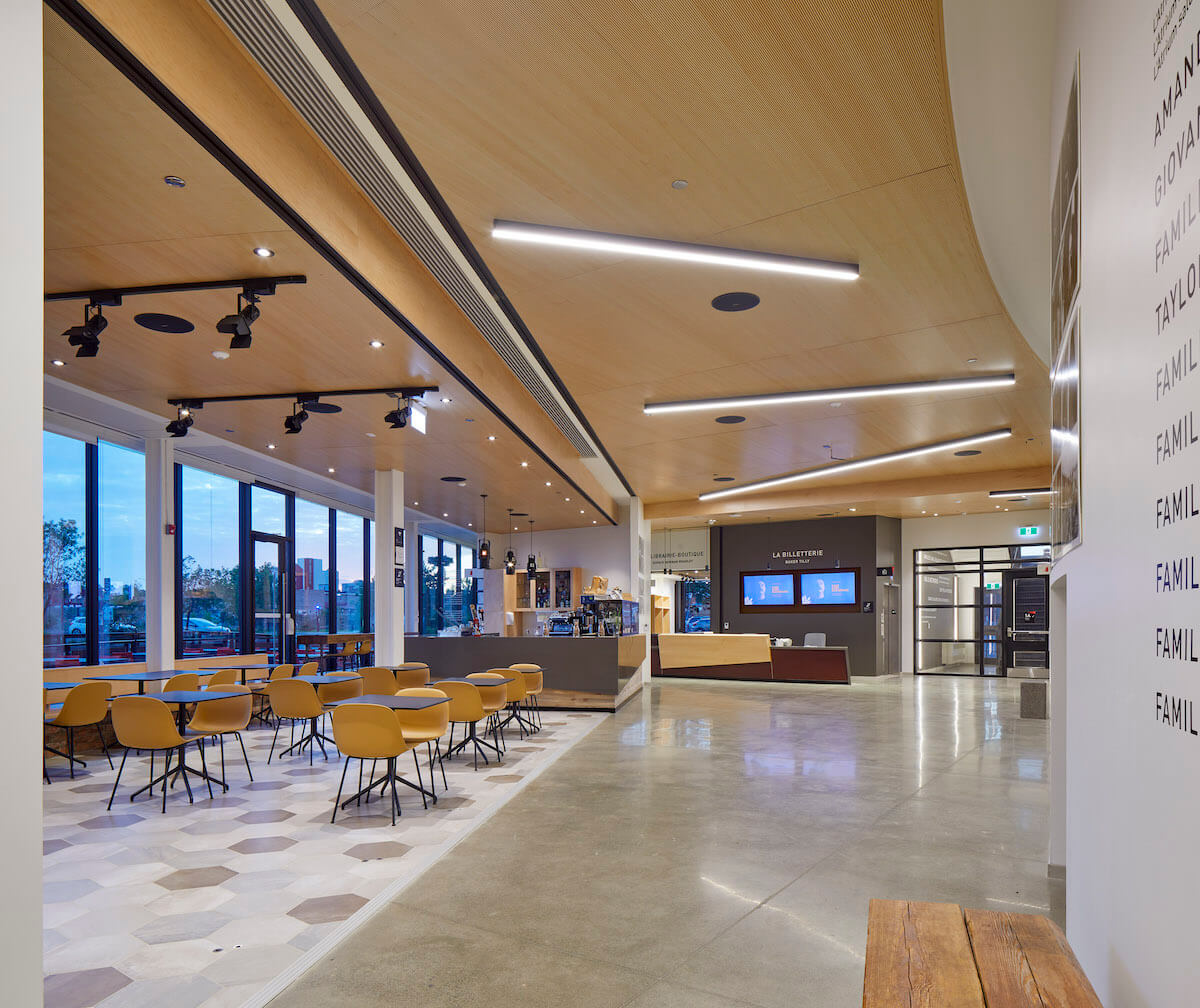 The bistro also features a unique installation – a wall packed tightly with rustic metal boxes, in sharp and moody counterbalance to the lobby’s clean finishes. Part of the design team’s efforts to fill the complex with historic fragments of local Franco-Ontarian culture, these boxes are bread pans salvaged from Sudbury’s historic Canada Bread factory, which housed the Théâtre du Nouvel-Ontario, one of the Place des Arts founding organizations, throughout the 1990s.

“We were well-aware of the owners’ keen interest to capture and promote our shared cultural history, so we made it our mission to source cultural artifacts,” explains Louis Bélanger, architect and partner at Bélanger Salach. “It was quite an adventure to collect them.” 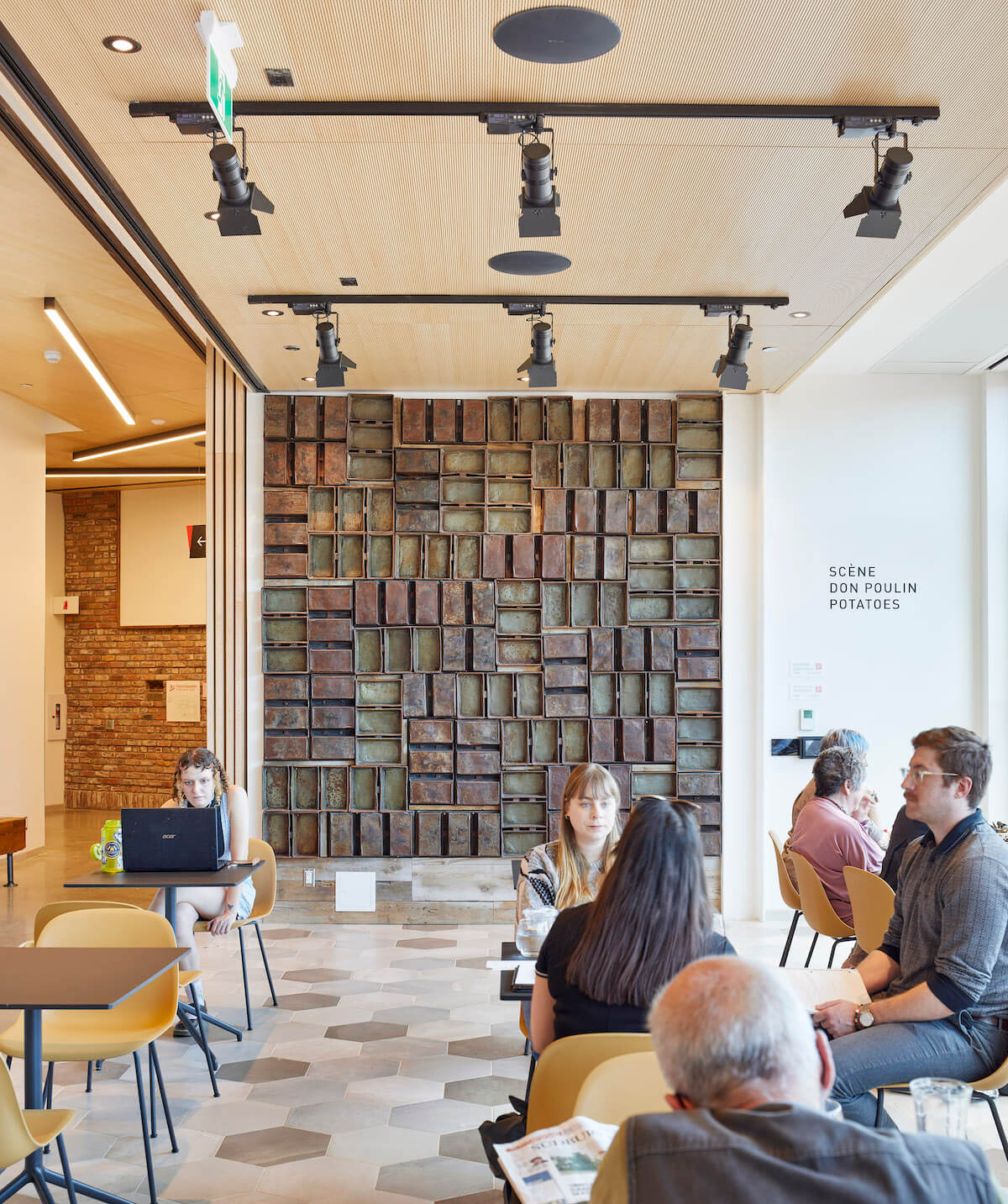 Further Franco-Ontarian artifacts are scattered throughout the building like an architectural easter egg hunt. Thick beams of white pine – once sent from Sudbury to Chicago after the city’s great fire, and since “repatriated” from demolished buildings – are shaped into wide benches. Nearby, a wall of bricks from an array of sources, like the hotel that once stood on the site, École primaire Ste-Thérèse in Hearst, and the childhood home of celebrated writer Jean Éthier Blais in Sturgeon Falls. Behind the front desk, the bookshop’s ceiling consists of tin panels sourced from the École Saint-Louis-de-Gonzague, a francophone elementary school built in Sudbury in 1915 (despite Ontario’s ban against French-language education at the time).

These artifacts are artfully placed to provide rich contrast and play throughout the facility; the bookstore’s chromatic ceiling in particular sits beautifully against a momentary intrusion of the dramatic façade. But they’re also essential in providing the Place des Arts with a sense of continuity. “With the integration of past and present elements into this new building,” says Bélanger, ‘it gives the new context roots in this one place.” 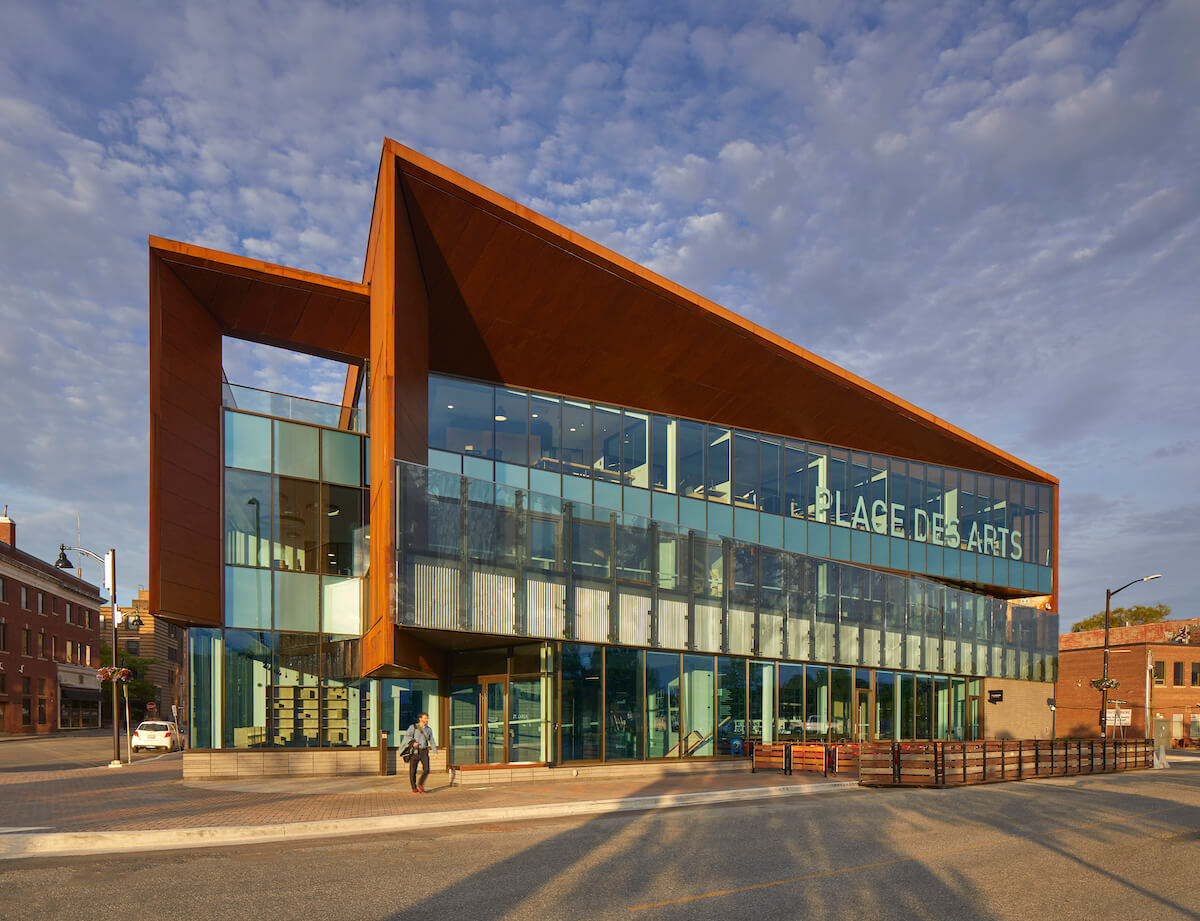 “As you enter, you’re greeted with these elements from the community,” Rudy explains. “It was really important to the clients and ourselves that it feel homey. As soon as you walk in, you feel like you’re in a comfortable living room.”

Upstairs, collaborative offices for the seven founding organizations coexist alongside an artistic daycare centre and the Zone, a multipurpose event-space and intermission bar for La Grande Salle’s balcony, which is also planned to host before- and after-school programs. Expansive windows open onto an exterior balcony with wide views over the adjacent rail yard – a surprisingly dynamic vista in a surprisingly dynamic facility. 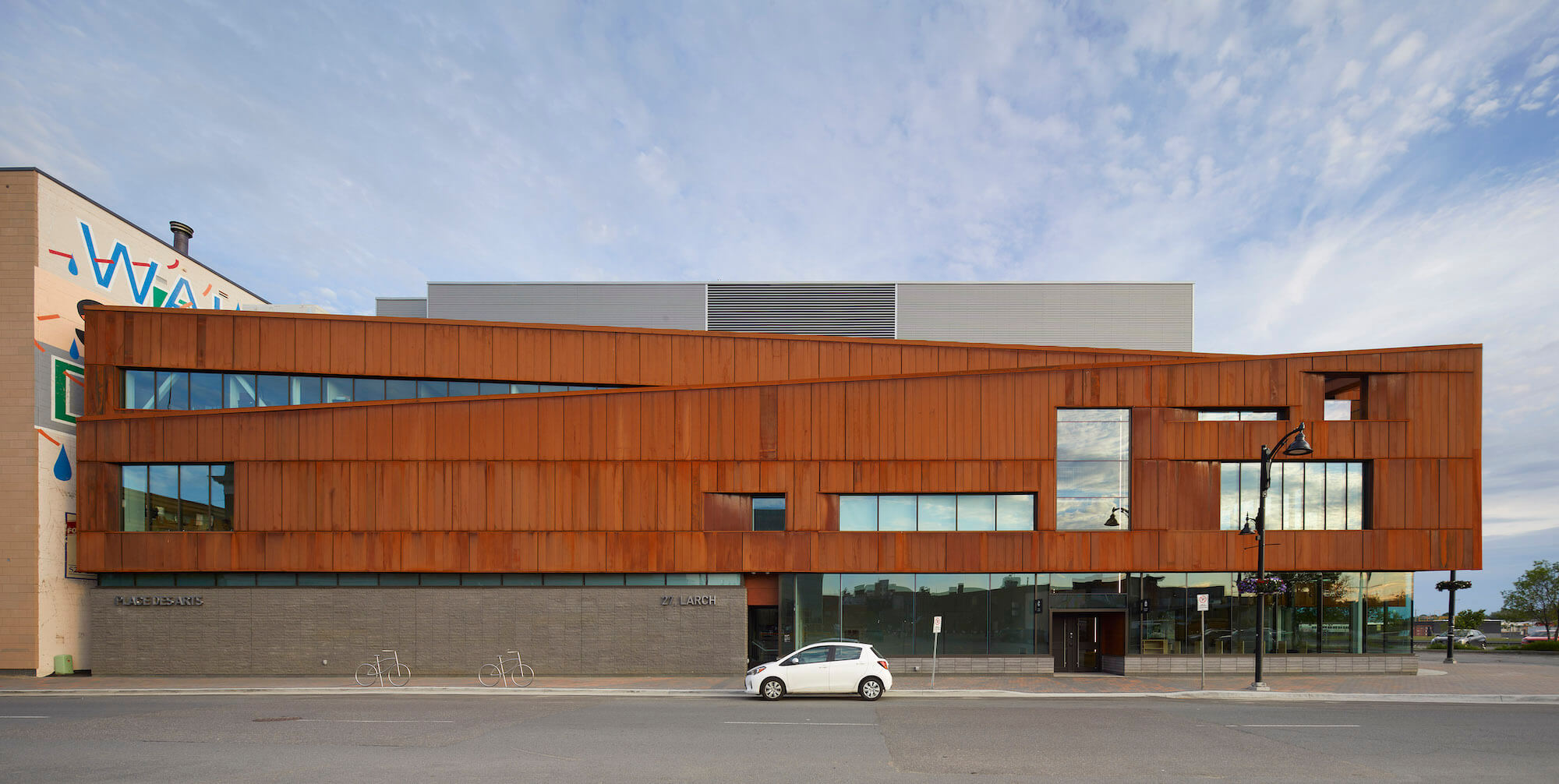 “Time and time again, we referred to the process as ‘designing a watch,’” says Bélanger. “Fitting all the parts required a significant effort – we had to make the rooms work harder.”

If a space could do double duty, it did, producing transparent common areas and a sheltered terrace shared among all the institutions. “The idea is that everybody mingles,” says Pelletier. “It’s very open – from my office, at the very end of the building, I can see clear through to the building across the street. It creates a sense of togetherness.”