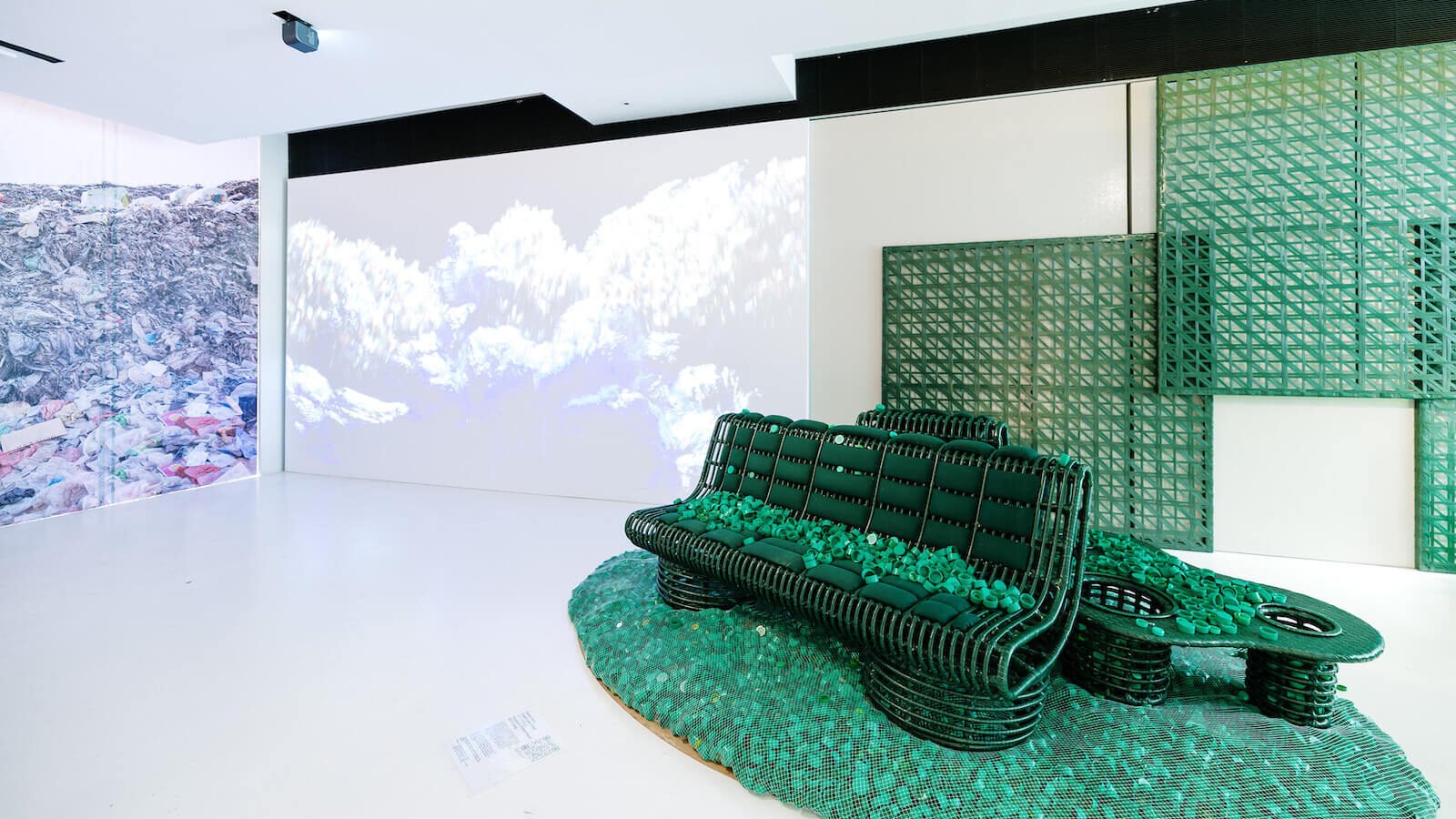 It’s not exactly common to encounter a hospitality brand as the driving force behind an exhibition celebrating circular design. But Potato Head is not your usual hospitality company. Sure, it provides tourists with luxurious stays at its beach clubs and resorts in Indonesia, Hong Kong and Singapore, including the Desa Potato Head creative village (also known as the Potato Head Beach Club) in Seminyak, Bali, which inaugurated the Potato Head Studios, a 168-room hotel complex by OMA, in 2020. 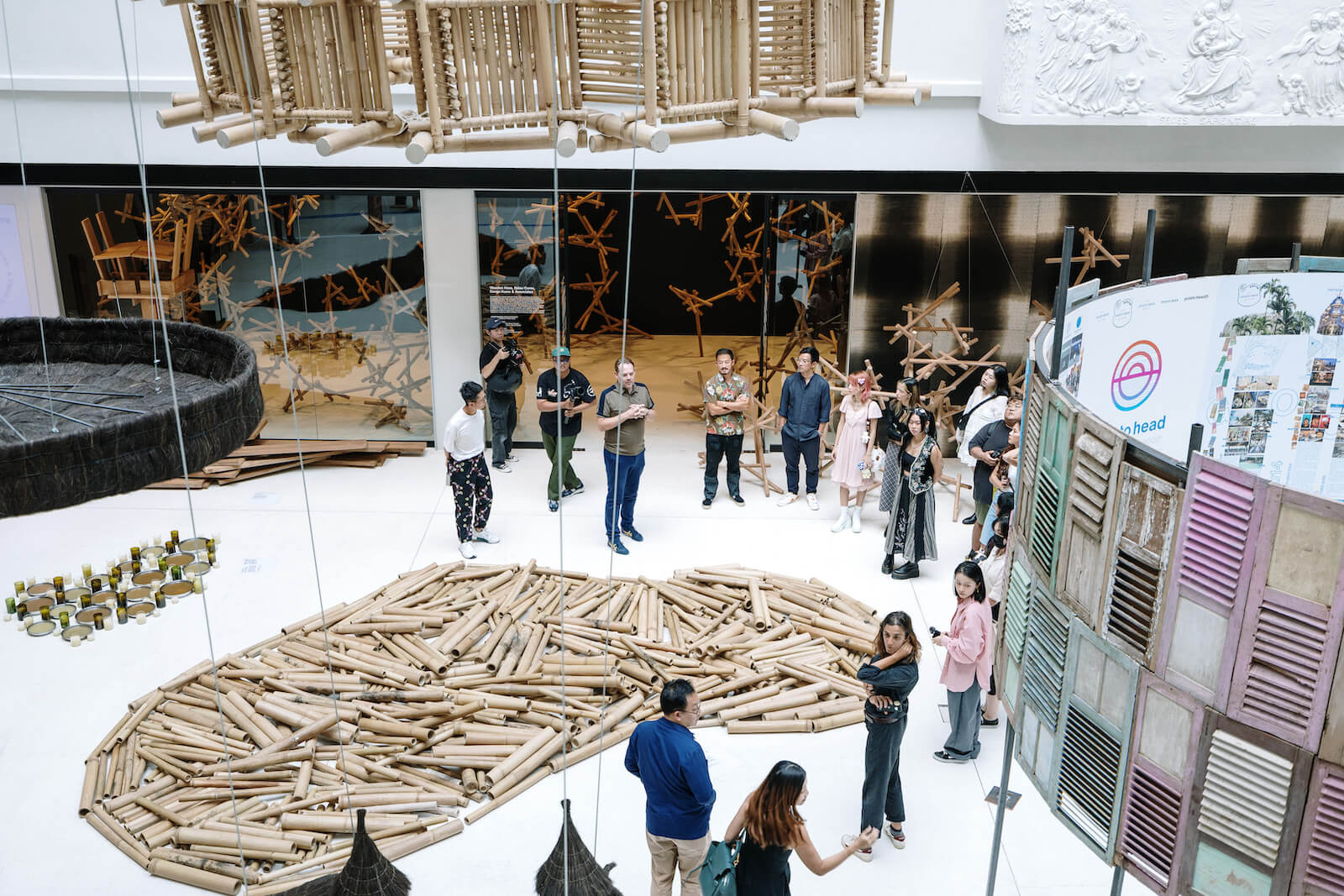 Easily renewable bamboo is shown on the floor and woven into chair structures at Potato Head’s N*thing is Possible show.

But its founder, Ronald Akili, has also been promoting sustainability as his core business ethos for over a decade. To this end, his properties feature all-vegan menus and eco-educational programs for kids (including lessons on making paint from sustainable pigments), plus they re-use the waste from their daily operations (and from all over Bali) to produce the furniture and design objects sold through their lifestyle vertical. Potato Head even has a gender-neutral fashion label that crafts clothing out of used materials. It all makes for a convincing motto: “Good Times, Do Good.” 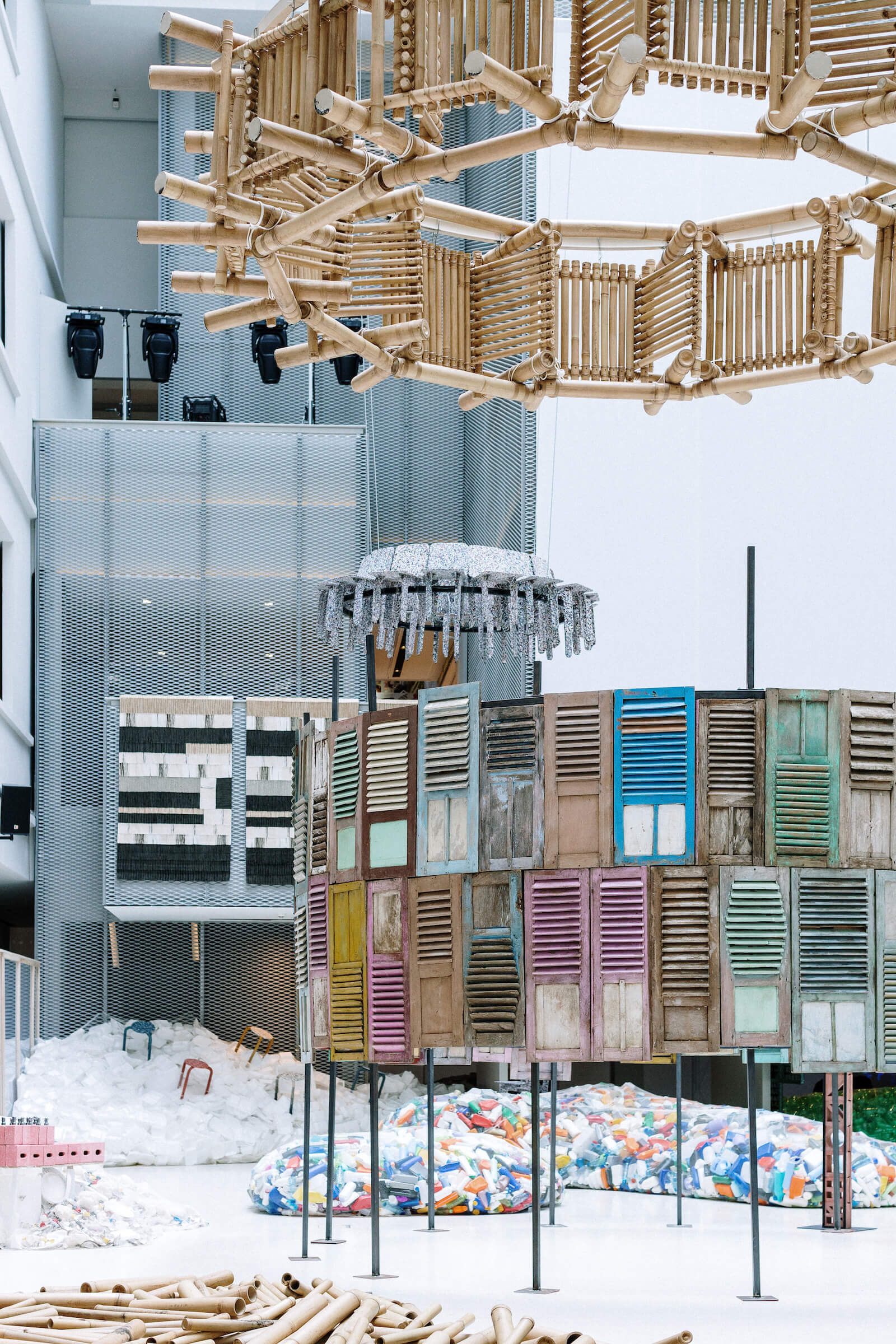 A scaled down version of Andra Matin’s open-air colosseum at Potato Head Beach Club also shows up in the exhibition.

Recently Potato Head partnered with OMA once again – this time on the curation of an exhibition at Singapore’s National Design Centre called N*thing is Possible. It opened mid-September, in time for Singapore Design Week, and runs until December 25. The title refers to how we can generate new design out of nothing (or with nothing new wasted) and reinforces the brand’s commitment to circularity and carbon neutrality. The show brings this theme alive with vividly creative possibilities. 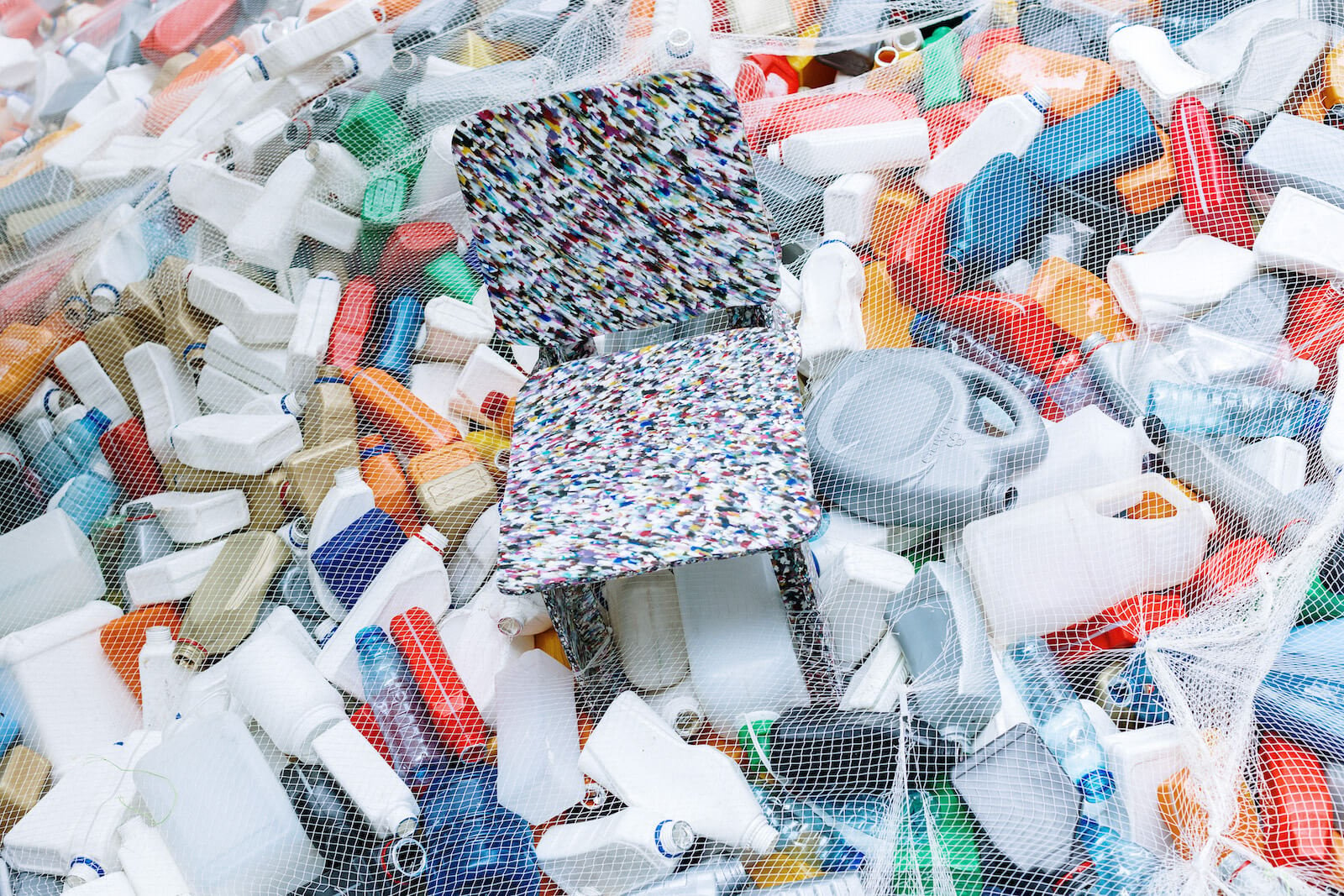 Among them are the works of numerous high-profile designers and artists – including international stars Studio Toogood, Kengo Kuma and Futura – alongside local participants, such as Jakarta studio BYO Living (which collaborates with Potato Head on the interiors and products in the resorts), Bali-based environmental engineers Eco Mantra and Singapore’s food and beverage brand Tanuki Raw. The circular workshop is run by TRASHLAB by Miniwiz & The Idea Co and the National Environment Agency. 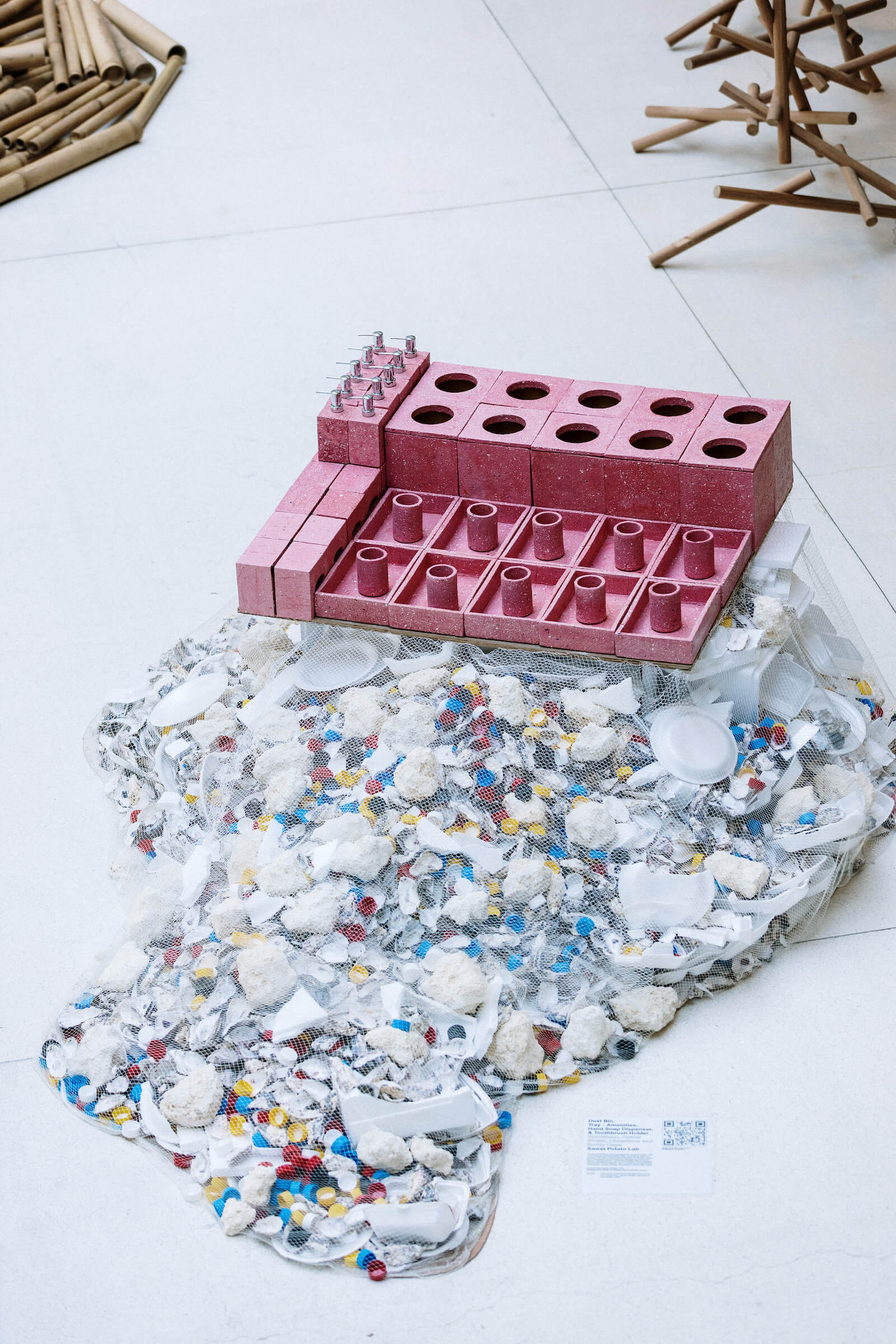 Kengo Kuma’s building block is made with plastic from single-use shopping bags. 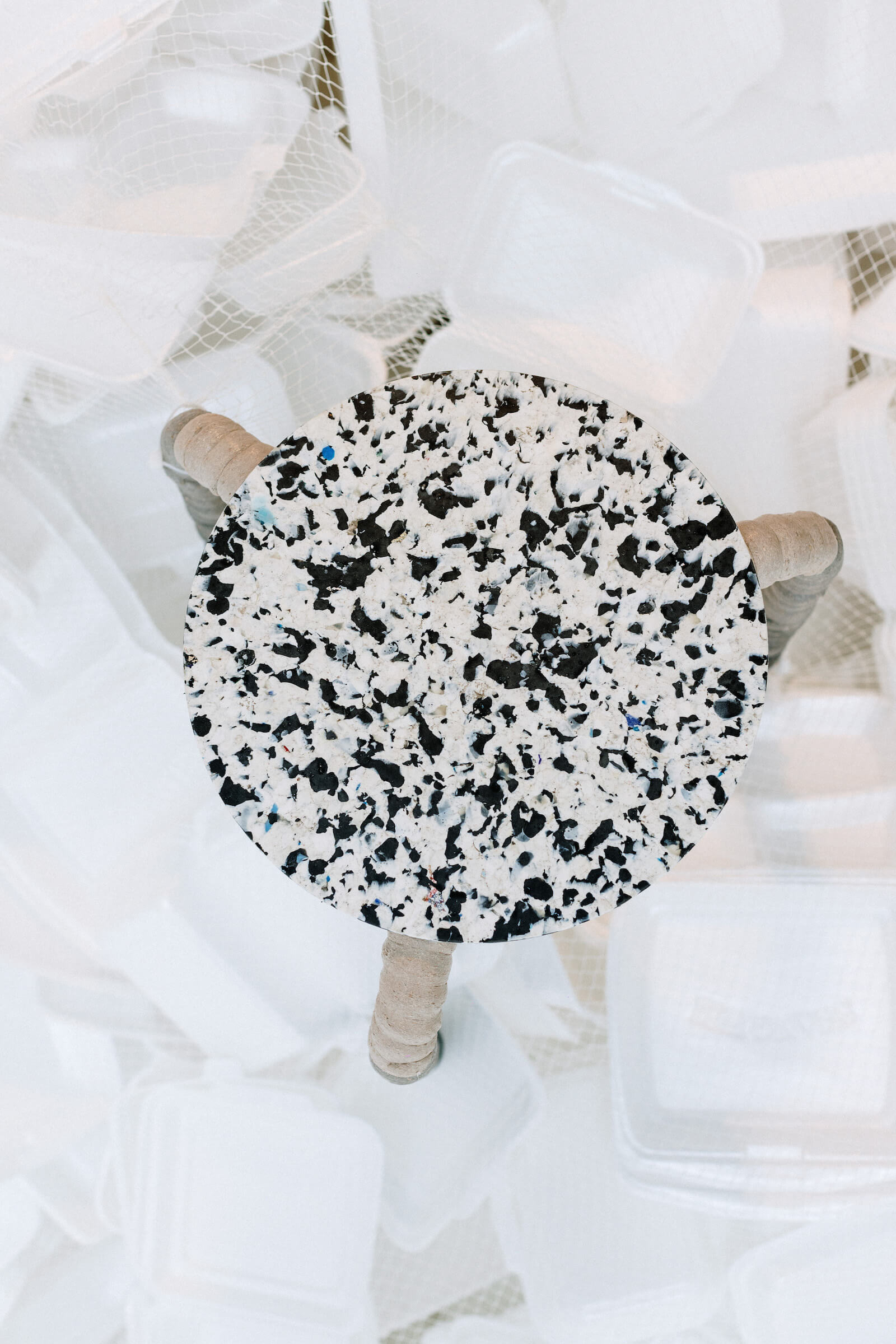 A stool by Andreu Carulla with legs made from melted polystyrene and a top from recycled shampoo bottles.

Some of the pieces are recreations of architecture and furnishings found in Potato Head’s spaces, including Andra Matin’s installation of a scalable version of his open-air colosseum at Desa Potato Head, which was constructed with 6,600 antique windows and shutters. Also from that project are BYO Living’s chairs woven with plastic derived from bottle caps and Studio Toogood’s iterations of its rattan bench made instead with single-use plastic bottles. There’s also Kengo Kuma’s building blocks – made, of course, with recycled polymers. 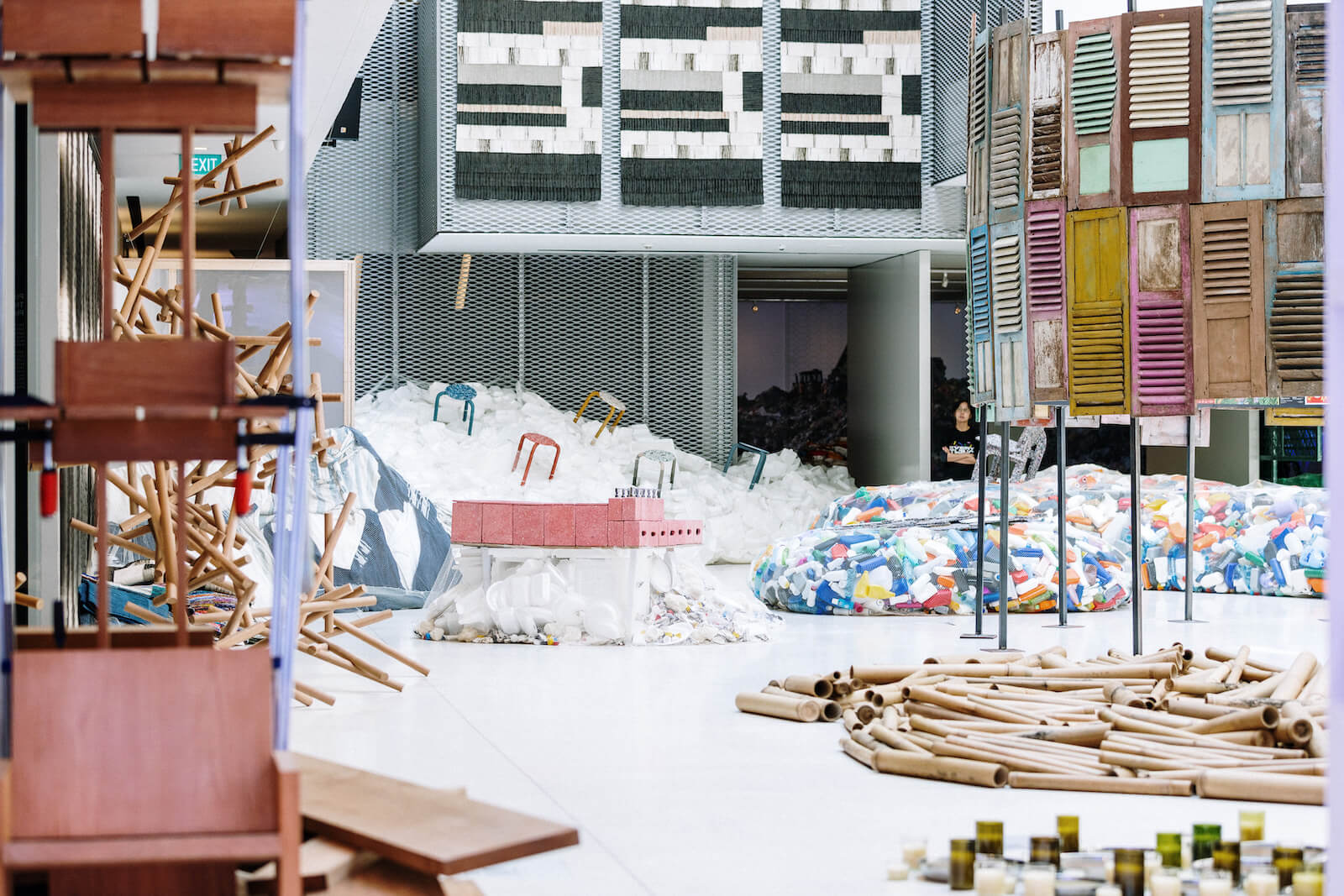 Alongside these physical artifacts, OMA has designed graphics that illustrate the problem of ballooning material waste streams – including those generated by the tourism industry in which Potato Head operates. By offering alternatives to virgin materials, including virgin plastics, the exhibition offsets our collective guilt by offering beautiful options. And the whole show itself will be upcycled at its end – TRASHLAB will use all the materials on display in workshops with Singapore creatives.