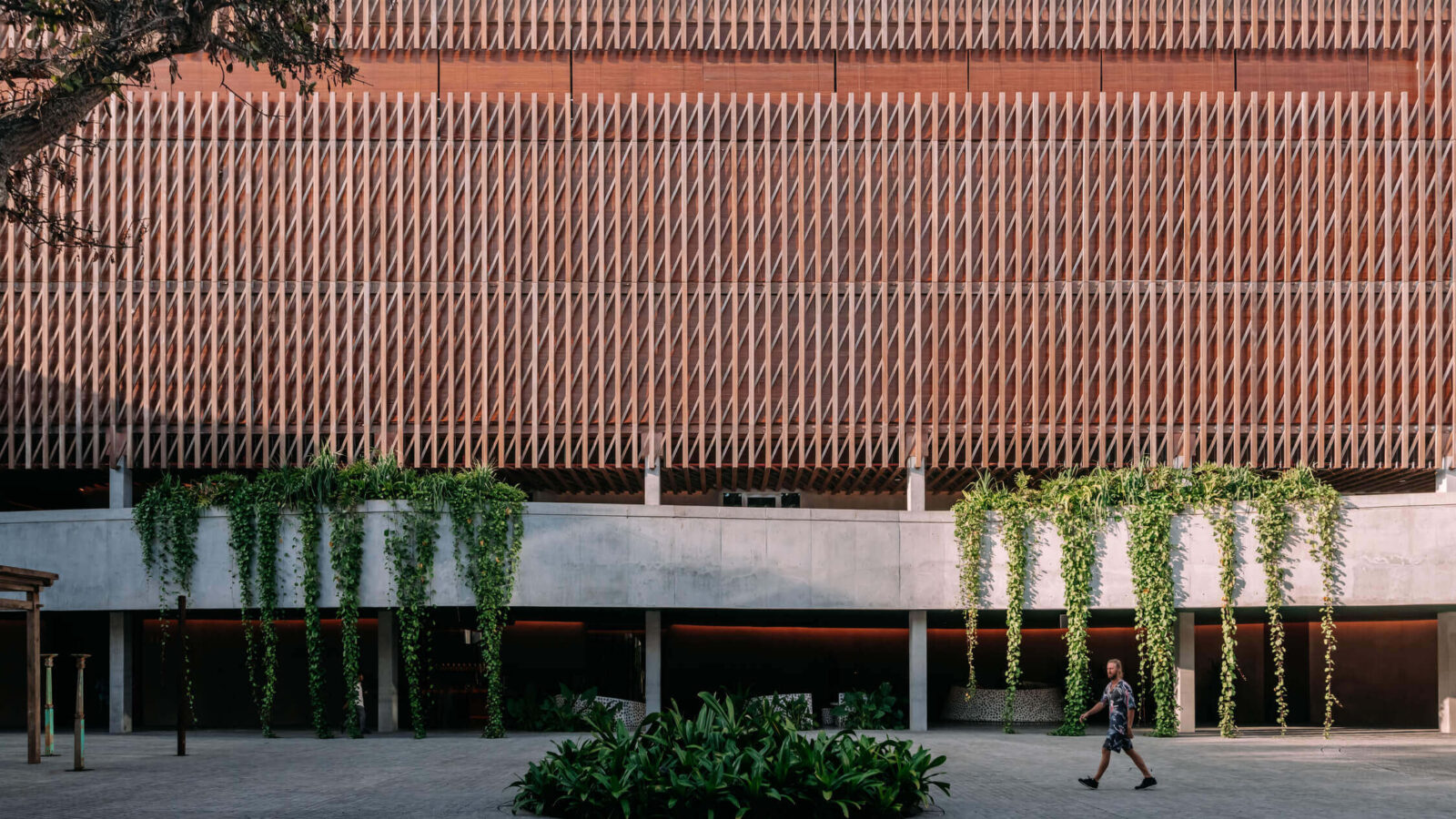 With its alluring coast and magnificent sunsets, it’s no surprise that Seminyak in Bali is densely packed with resorts, all offering panoramic ocean views from the comfort of private compounds. For its first hotel on the Indonesian island, global studio OMA was keen not to add too egregiously to the seaside clutter. Built on one of the area’s last unoccupied shores, its antidote, Desa Potato Head, is a three-property “village” that eschews what the firm calls a “ubiquitous resort typology.” Chief among these counter-models is Potato Head Studios, a 168-room hotel complex that not only rejects exclusivity, but actively embraces the local community. 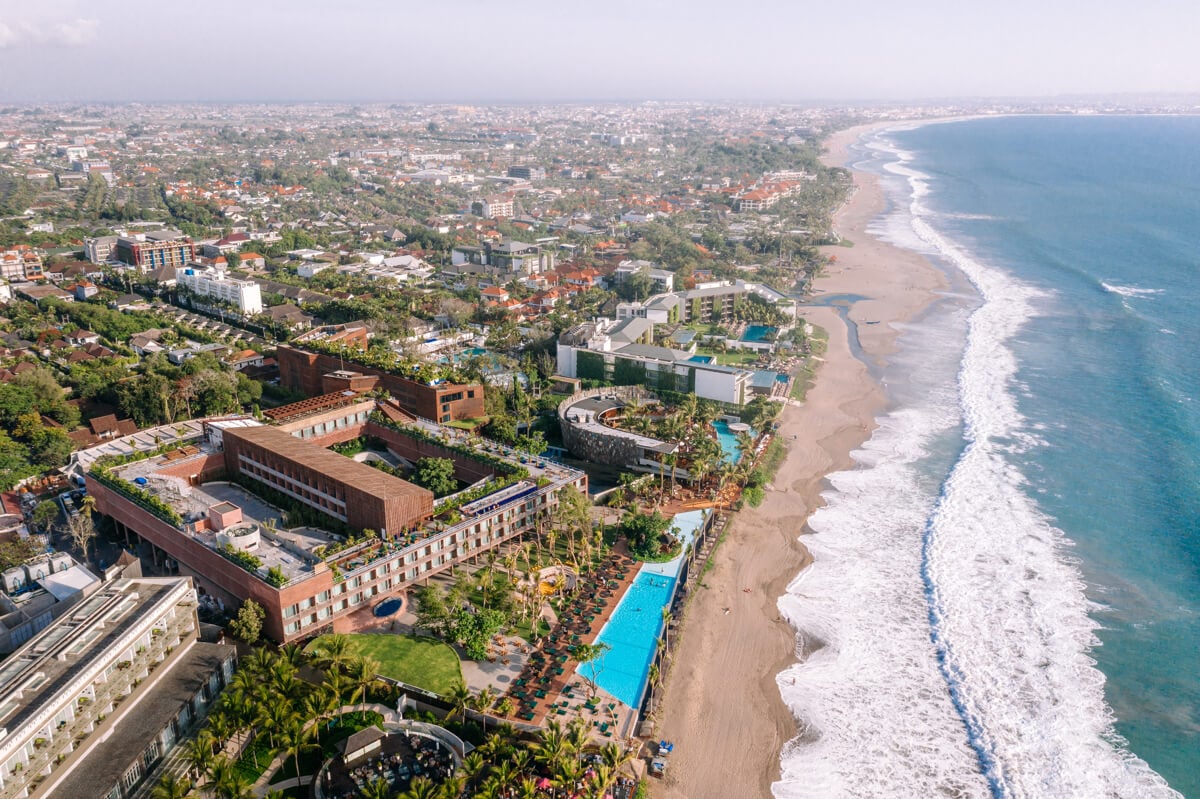 One of three structures at Desa Potato Head, a resort village comprising two hotels and a beach club, Potato Head Studios floats above the ground plane to invite interaction between guests and locals.

“Potato Head Studios is a place where Balinese culture is experienced and created at the same time,” OMA managing partner David Gianotten, who oversaw the project, says of the 20,000-square-metre site, where an open ground plane connected to the beach welcomes visitors of all kinds. This defining plaza at the core of the hotel evokes a cornerstone of local architecture: the traditional Balinese courtyard. It’s a space that quite literally bridges local and foreign, traditional cultural activities and commercial hospitality. 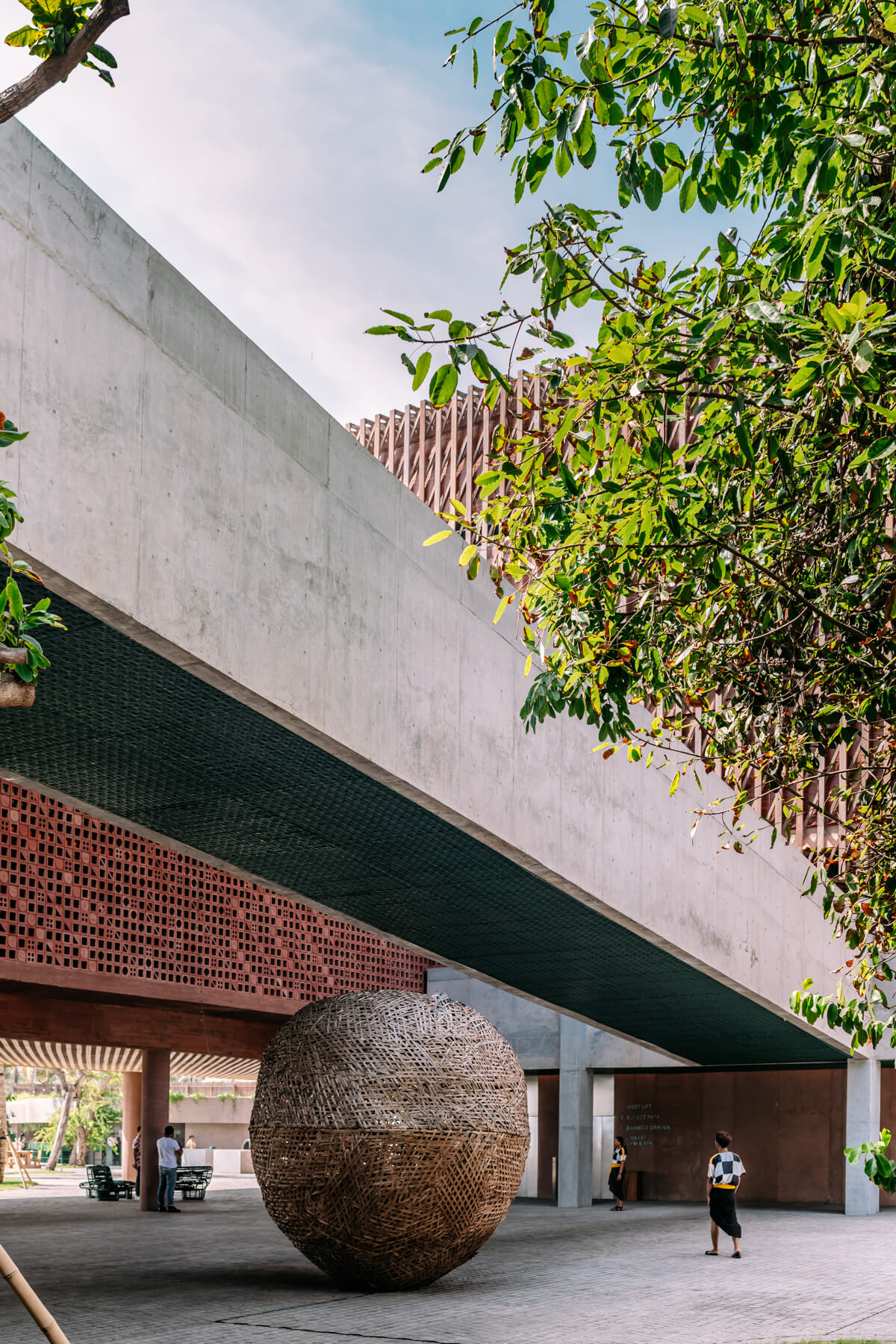 The organization of the 168-room complex draws on traditional Balinese courtyards to create an “open platform” blending the hotel with the nearby beach below and a public rooftop sculpture park above.

From the outside, the hotel’s facade appears porous or like an open weave, its earthy tone and texture achieved through concrete made with local sands. A floating ring lifted by pilotis sets the guest rooms, an exhibition space and a large sunset bar apart from the public programming below, where a religious festival might take place on one night and fashion show or film screening the next. Through a public route that winds around the levitating complex, visitors also can access the sculptural park on the rooftop. 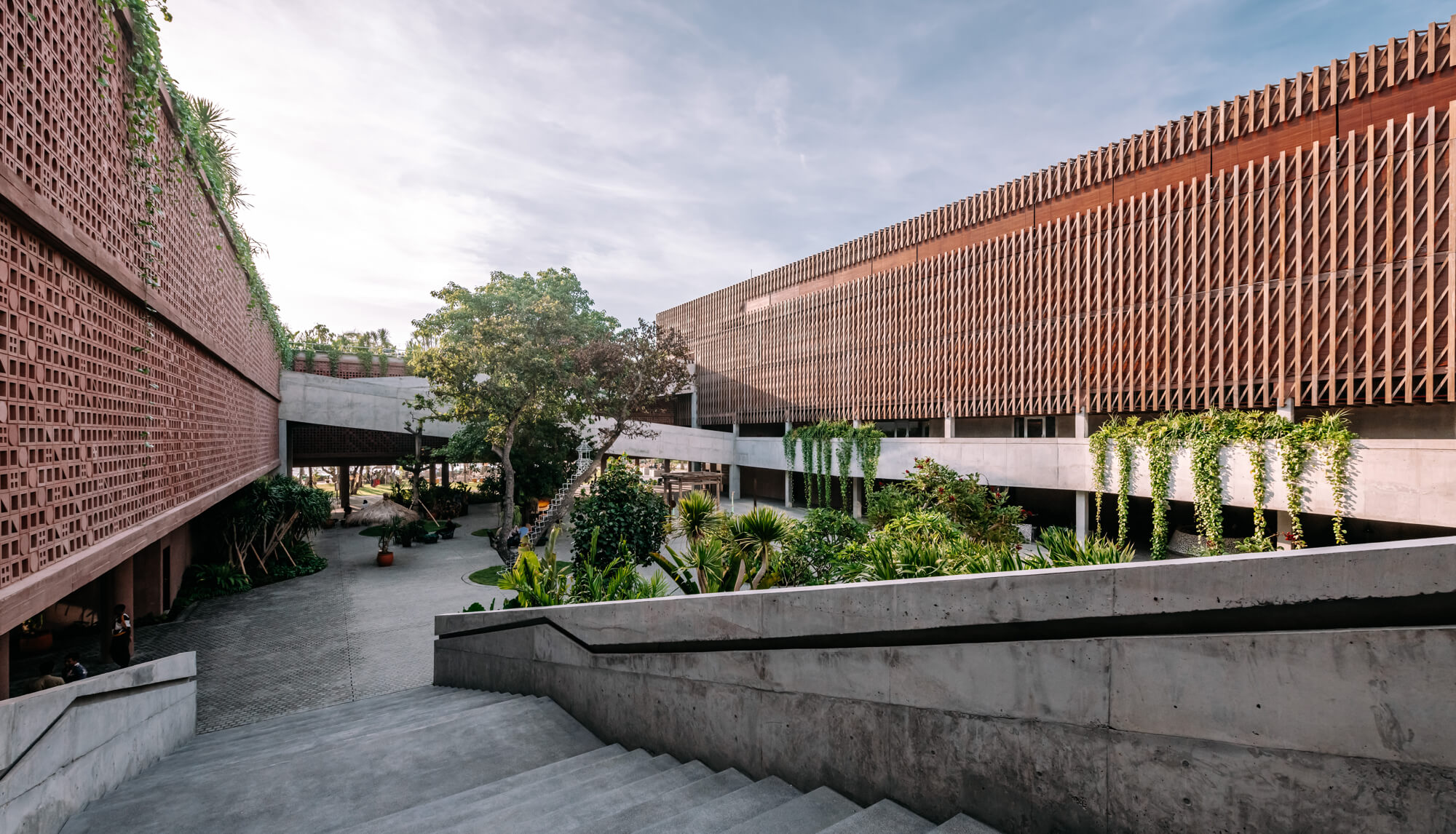 Much of the hotel’s materiality is reflective of its context, including the tone and texture of the textile-like concrete facade made of sand.

To achieve Potato Head Studios’ distinctive materiality, Gianotten and his team collaborated with local craftspeople to ensure that the new hotel reflected its surroundings. Under the guidance of Balinese artisans, for instance, traditional weaving techniques were applied to recycled plastic bottles in order to create the woven ceiling panels in the central foyer. “Bali is known for its craftsmanship, and its textile work is refined,” says Gianotten. “All the panels were handmade. It was an experimentation with both materiality and production processes.” 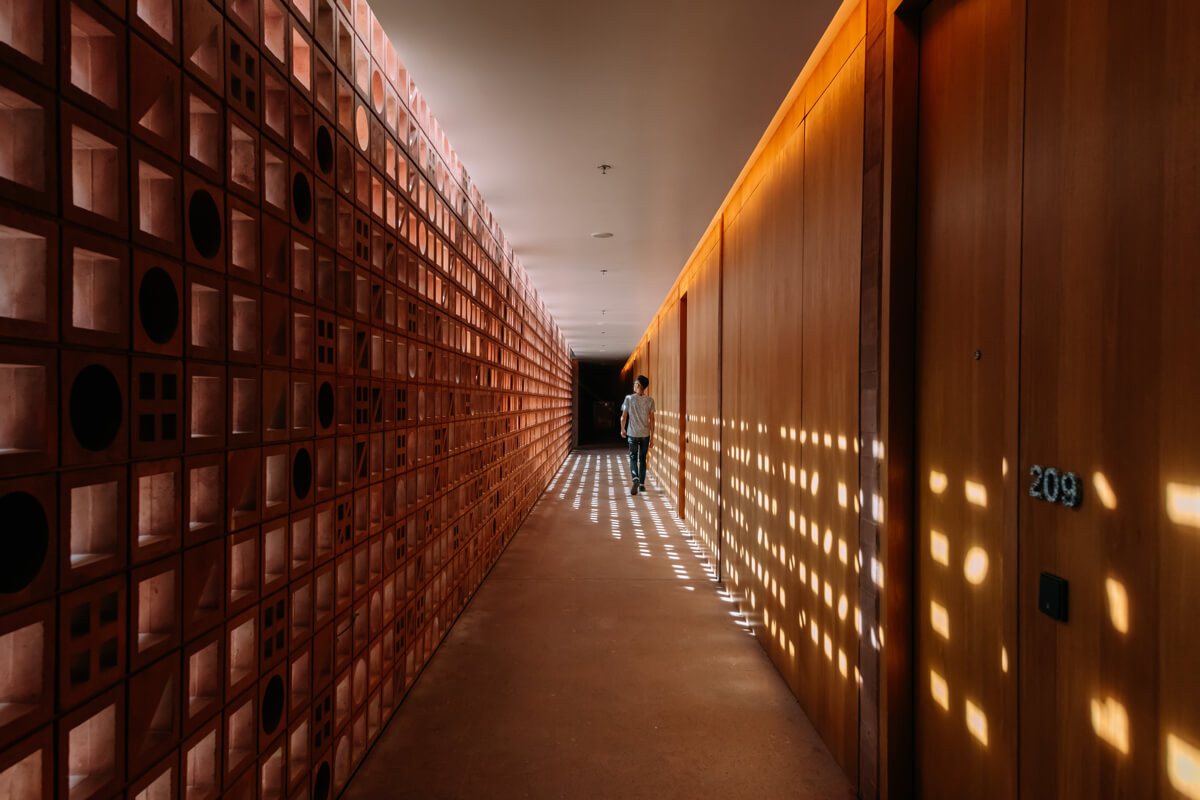 Hand-crafted breeze block walls offer a distinct and ever-changing patterning of light in approaching the entrance to each unit. 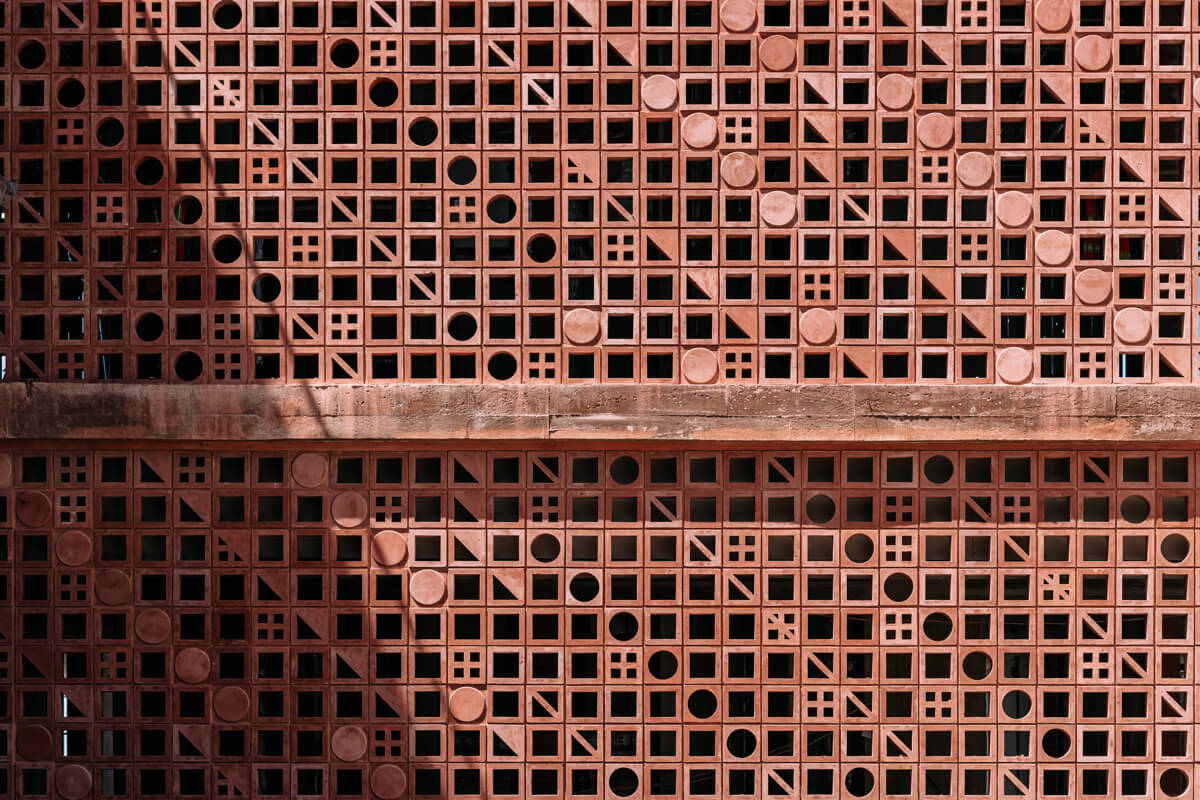 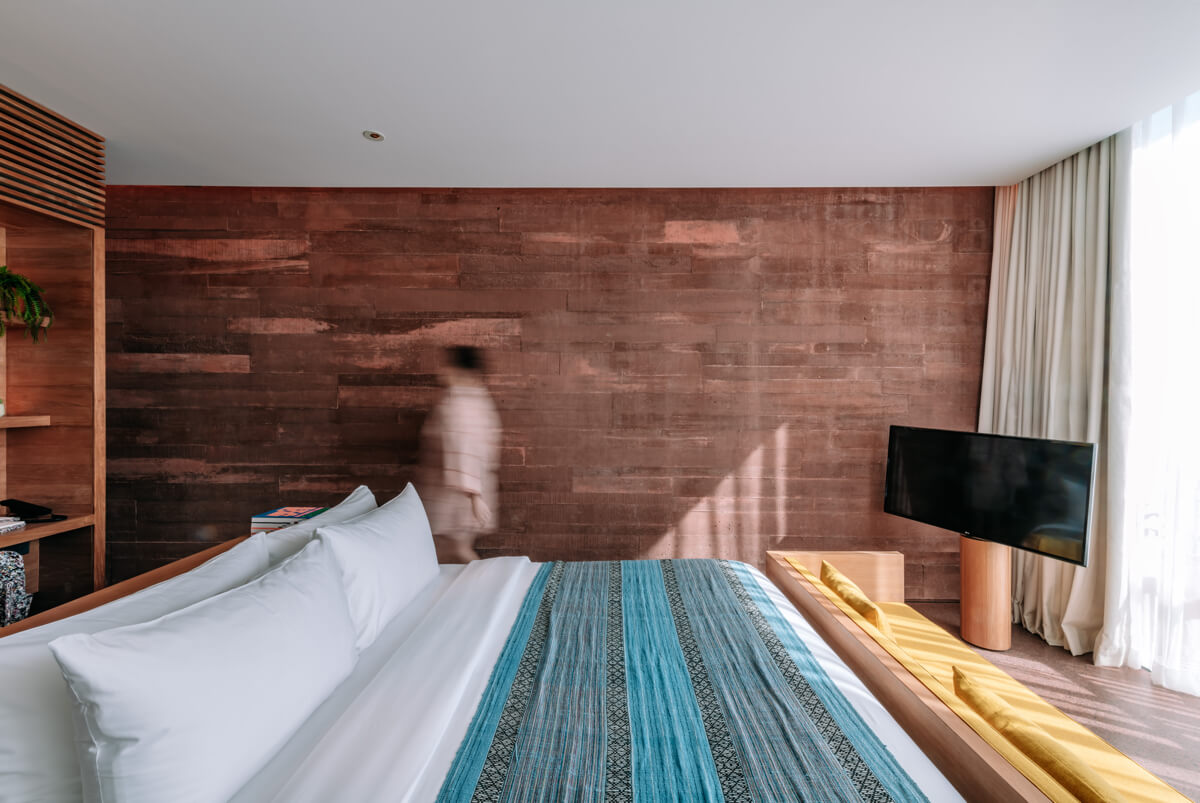 Other locally sourced and recycled materials include ijuk (a vernacular roofing surface), teak, handcrafted breeze blocks and terrazzo made from repurposed concrete waste. A number of concrete walls, too, have distinctive textures, including a unique surface treatment that local craftsmen produced with hammers. 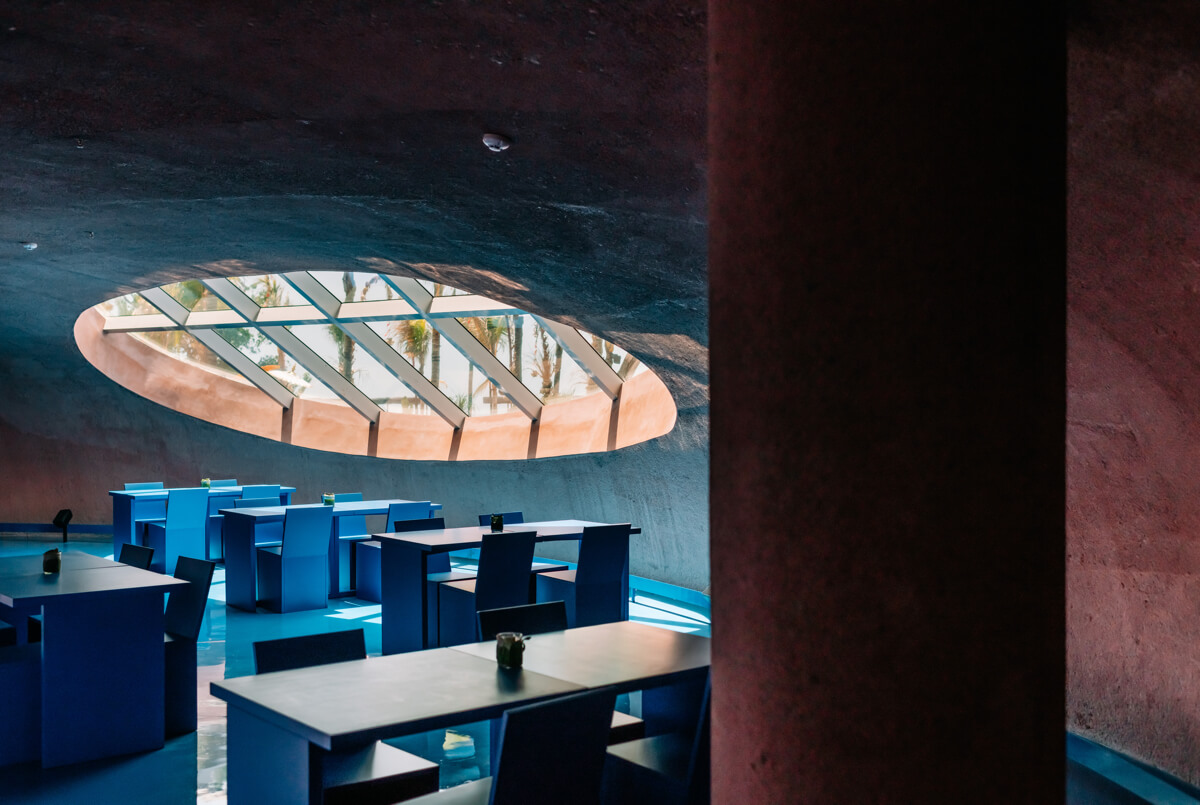 In the subterranean restaurant Tanama, highly reflective blue epoxy floors mimic the deep shade of water while an identical hue applied to fixtures and furnishings creates an immersive atmosphere.

OMA also enlisted the help of Indonesian architect Andra Matin and his eponymous studio so another local perspective would echo throughout the project. Matin’s team “helped us to understand the local culture and circumstances, and gave us a lot of ideas and comments on the design,” says Gianotten. The firm also designed the hotel’s blue cistern-like restaurant, Tanama, with epoxy floors and matching furnishings. 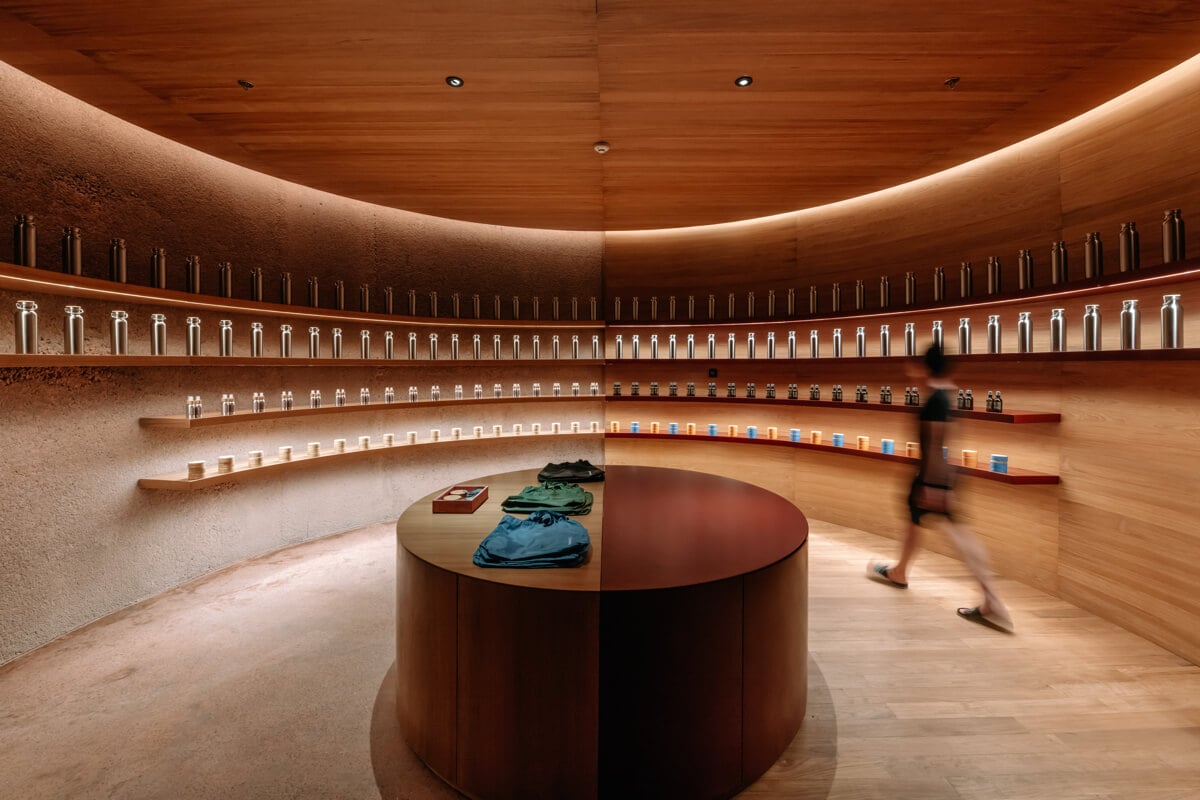 Tucked near the gym and spa, a small retail space continues the striking combination of local materials present throughout the project. Gracefully curving shelves accent a wall that graphically transitions from wood to exposed stone.

Although there may be no singular essence of Balinese culture, Potato Head Studios actively embraces its context, deftly shifting it from what is all too often marked by private consumption to one geared toward public engagement.