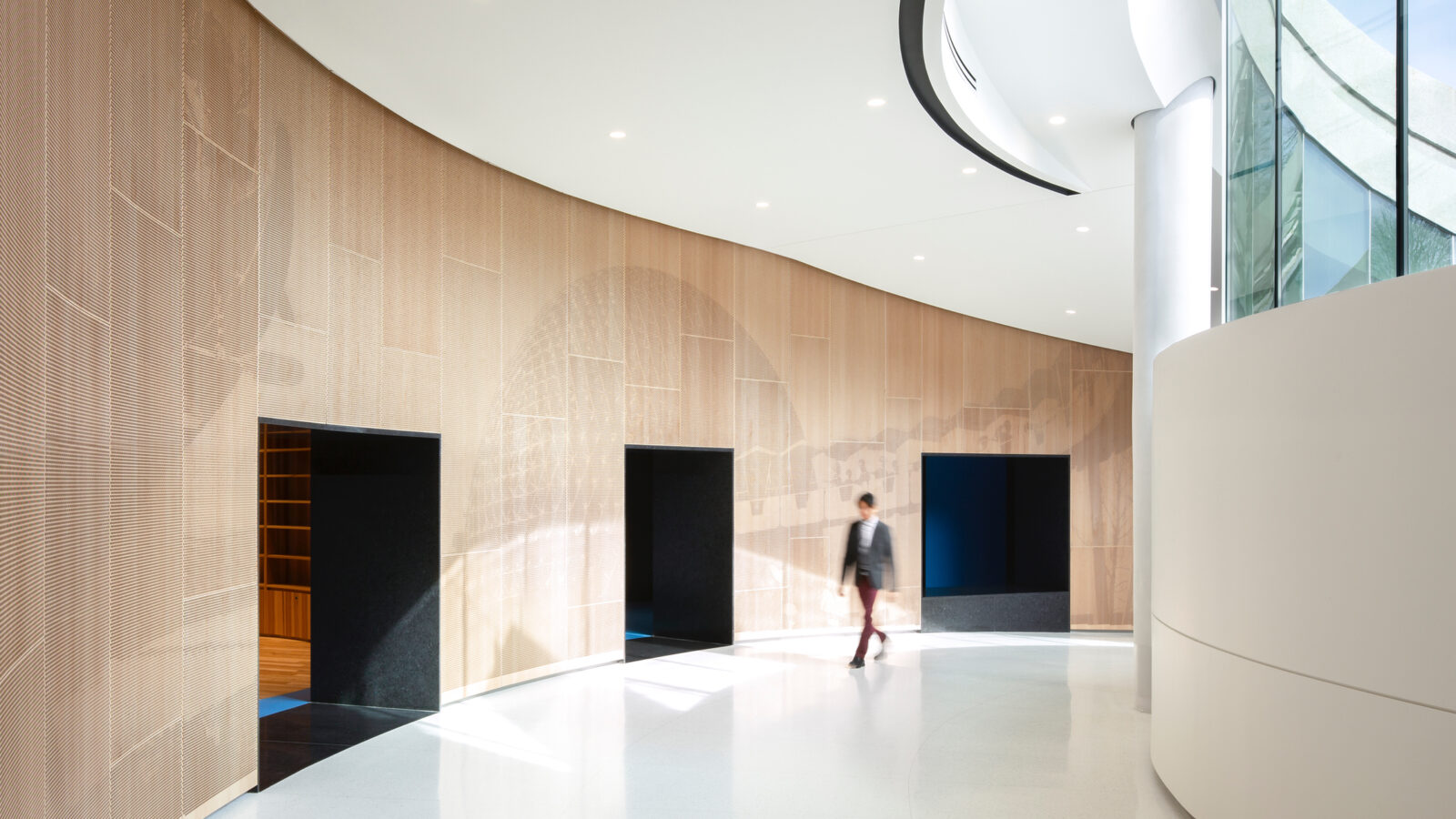 Completely subterranean, the ultra-contemporary entry by Provencher_Roy is all but invisible when the historic building is viewed head-on.

Few buildings in Quebec are as central to its history and aspirations as a distinct society than the National Assembly in the provincial capital. Completed in 1886, the Second Empire-style structure just outside the walls of Old Quebec has seen historic debates, momentous declarations and everything from comedy to tragedy take place there. Politicians and architects tinker with it at their peril.

Even so, a team from the multidisciplinary Montreal firm Provencher_Roy and Quebec City’s GLCRM Architectes signed up not only to “modernize” how people access and circulate within the heritage building, but also to create what’s essentially its new front door.

Their artful interventions — centred largely around a new entrance plaza leading to a subterranean “agora” topped by an oculus — have more than lived up to the daunting task, going beyond mere respect for historic context to dramatically enhance how that context is experienced.

But unlike I.M. Pei’s iconic Pyramid at the Louvre, another ground-level marker leading to a below-grade portal, the Provencher_Roy entry is all but invisible when the Assembly’s grand facade is viewed head-on. To install it, the building’s monumental staircase was dismantled brick by brick, placed in storage and then rebuilt in identical fashion around a new glazed entrance wall. In the interim, the National Assembly’s frontage was excavated down to its foundations in order to install the new programs — a process made possible by its construction on solid bedrock.

“Provencher_Roy opted for a sensitive and completely integrated intervention by sliding the entire pavilion beneath the existing landscape,” says firm co-founder Claude Provencher. The result is that rare feat: an architectural tour de force with a light touch, both a bold stroke and a prelude to the real drama inside.

There, the entrance transmutes into a spiral ramp lined with perforated panels depicting scenes from Quebec’s history. Totalling 300 metres in length, the ramp surrounds a circular atrium known as the “agora,” a place for gathering and for fostering civic identity, its shape evoking “notions of neutrality, unity and equality.” The agora is topped by an oculus framing the central tower of the National Assembly outside. Natural light pours into the agora through this window, which also illuminates the pathway at the base of the Assembly at night.

The indoor ramp, however, is more than just a border for the agora. In addition to guiding visitor circulation, it serves as a structural fulcrum for the underground space, while the panels lining it conceal services and enable air circulation via the deeper perforations. All of the pavilion’s key functions — from reception, security, check-in and cloakrooms to multifunctional and commission rooms — are also organized around it, “allowing the visitor to discover not only the evolution of our democracy, but also its functioning in real time, through windows and informative panels that offer an immersion into parliamentary debates.” 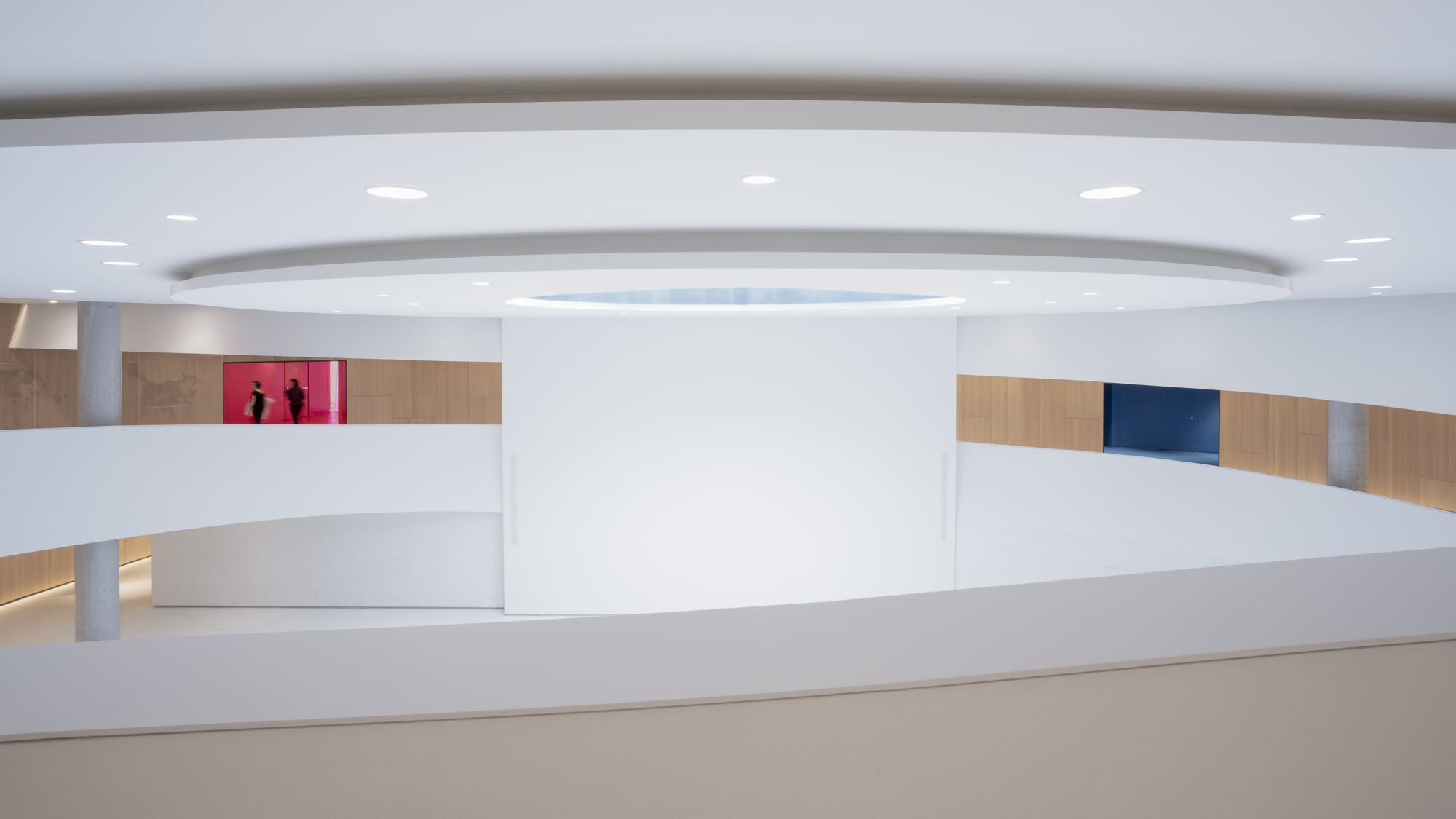 The use of lighting and colour schemes, moreover, imparts a museum-like quality to the trail created by the ramp, “with tonal shifts from white to blue to red, a reference to the National Assembly’s Salon bleu and Salon rouge.” A tunnel, housing Jonathan Villeneuve’s work Le Spectre des Lumière, leads to an elevator providing access to the Assembly’s upper floors.

According to the design team, the pavilion’s location underground “confers certain qualities to the project, including a development of programming elements that is free of constraints, as well as substantial savings in construction and maintenance costs (chiefly as a result of the diminished need for air conditioning in summertime and heating during the cold season).”

Further added value “is found in the building’s energy profile, the absence of facade development translating into significant energy efficiency, as evidenced by the building’s LEED Silver certification.”

An Office Like No Other Revives Montreal’s Olympic Tower
Designed by Provencher_Roy, a marquee workplace for Desjardins brings new life to the long-dormant civic showpiece.
Read More

Most of all, though, the project’s overall concept “constitutes its most sustainable gesture, namely the preservation of the existing structures and layouts in their entirety as a means of perpetuating history.”

Completely subterranean, the ultra-contemporary entry by Provencher_Roy is all but invisible when the historic building is viewed head-on.