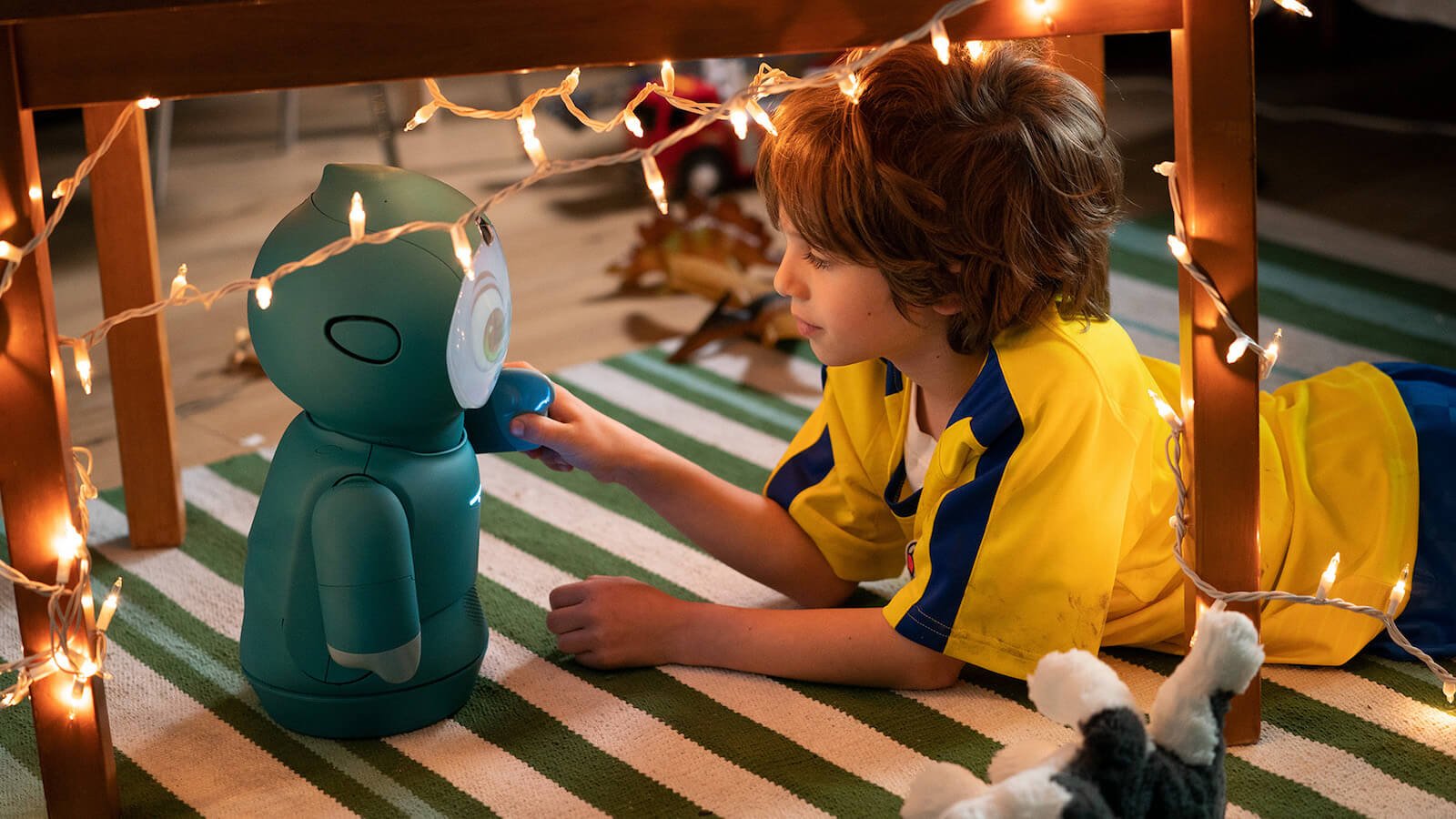 For Embodied, Yves Béhar’s Fuseproject has designed an AI robot for children across the ability spectrum, from neurotypical to neurodivergent.

Measuring 38.7 centimetres tall and featuring a friendly face – which is actually an interface – Moxie is a robot launched by Embodied in order to help kids aged six to nine years old to “build social, emotional and cognitive skills through everyday play-based learning and engaging content.”

It was designed by Fuseproject, the San Francisco studio established by Yves Béhar, which is known for its smart-technology designs that introduce novel digital functionalities for the home by incorporating them into an appealing package (such as its Samsung Frame and Forme fitness system). Moxie is the latest in the studio’s projects focused on children’s education, after such initiatives as One Laptop Per Child and See Better to Learn Better. 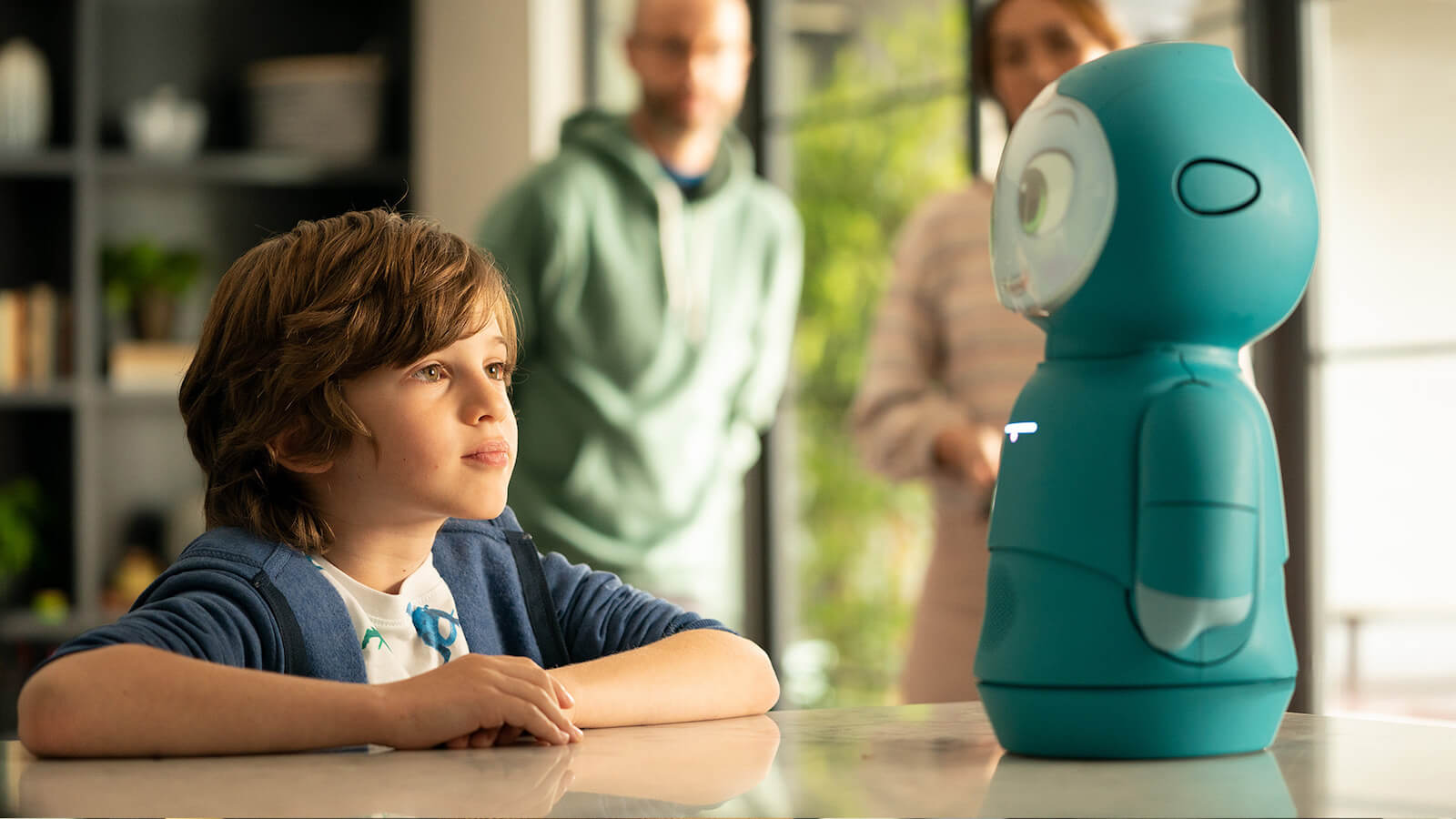 Moxie is meant to act as a helpful companion to kids regardless of where they are situated across the ability spectrum, from neurotypical to neurodivergent. World-class experts in fields as varied as child development, engineering and game design were consulted in the creation of its AI functionality, operable through the Embodied Moxie Parent App. This machine learning technology “allows it to perceive, process and respond to natural conversation, eye contact, facial expressions and other behaviour as well as recognize and recall people, places and things.” 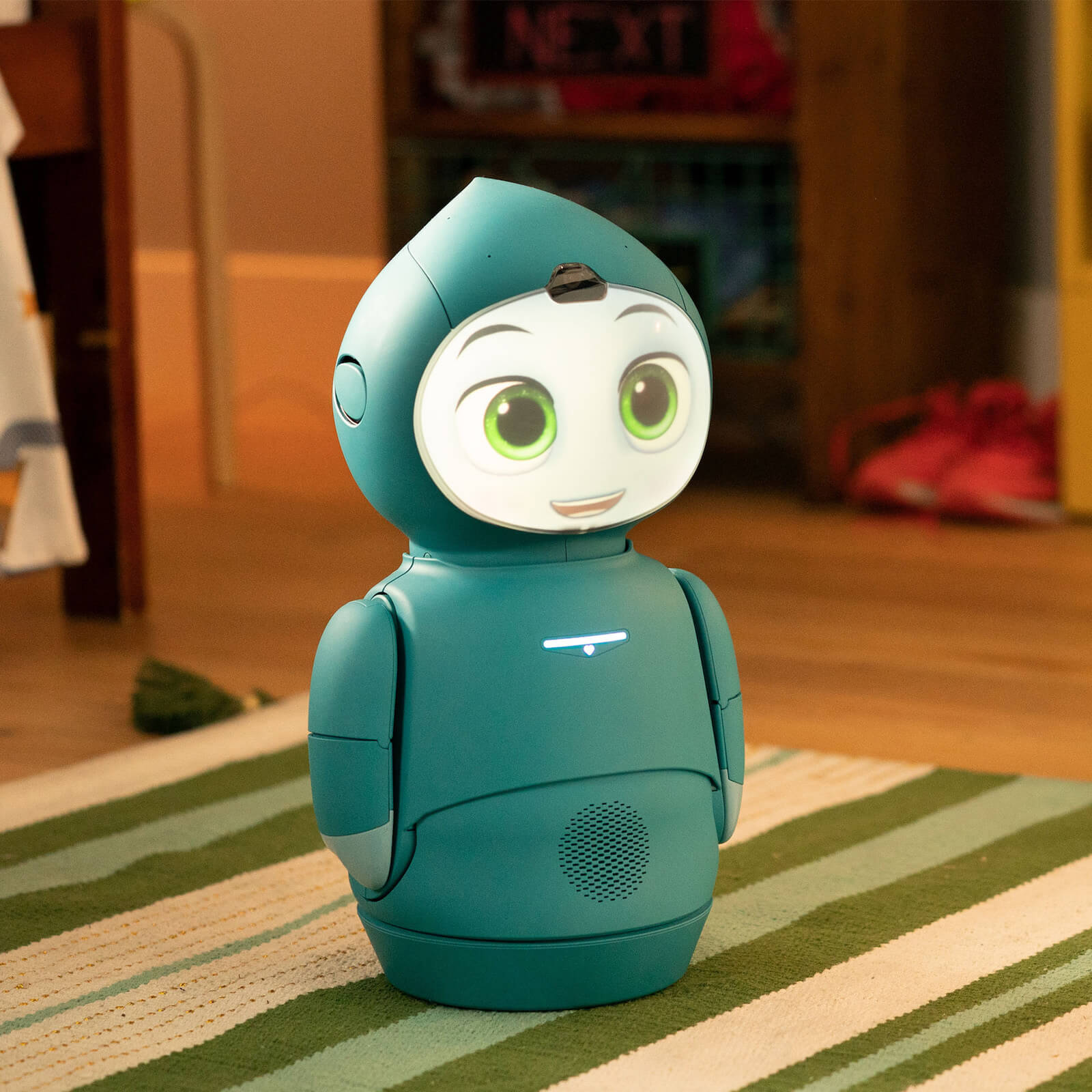 Its smooth body, wrapped in soft-to-the-touch high-performance thermoplastic elastomer, seamlessly integrates both complex technology and the ability to physically react in real time: Moxie can turn 360 degrees and bend at its base, neck and belly. Its simplified hand features an index finger (and a thumb silhouette) for pointing, indicating interest or asking a question. It also reacts when you speak into its teardrop-shaped ears, thanks to its component speaker and microphone.

In a promotional video, the robot is shown asking questions (which can be based on suggestions that parents input into the app) and even follow-up queries to encourage a child to continue speaking. The robot also listens as it is read to and responds to having its hand squeezed. In terms of conveying meaningful life lessons, it can be programmed to announce prompts for “missions,” which might include drawing a picture or connecting with an IRL friend. 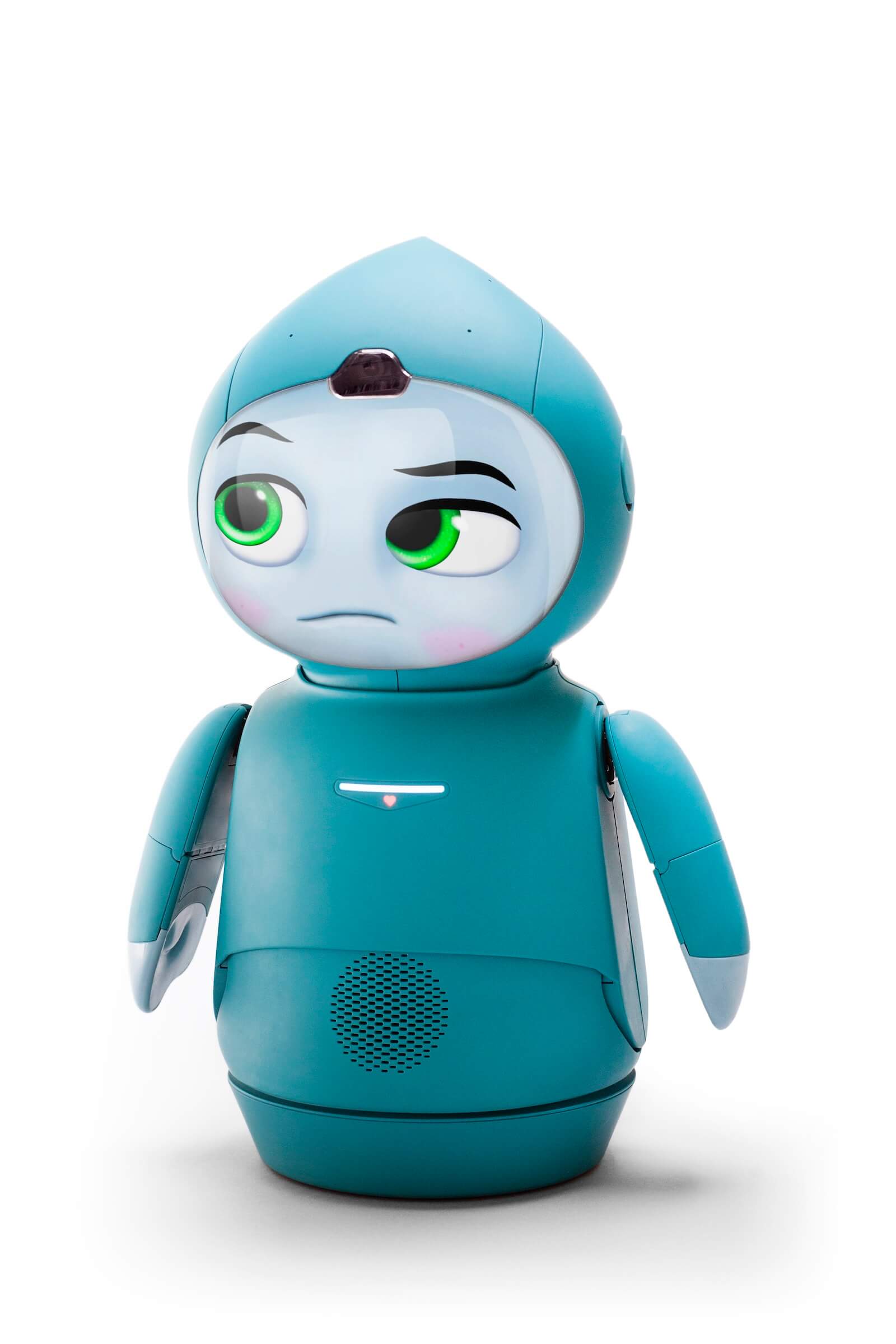 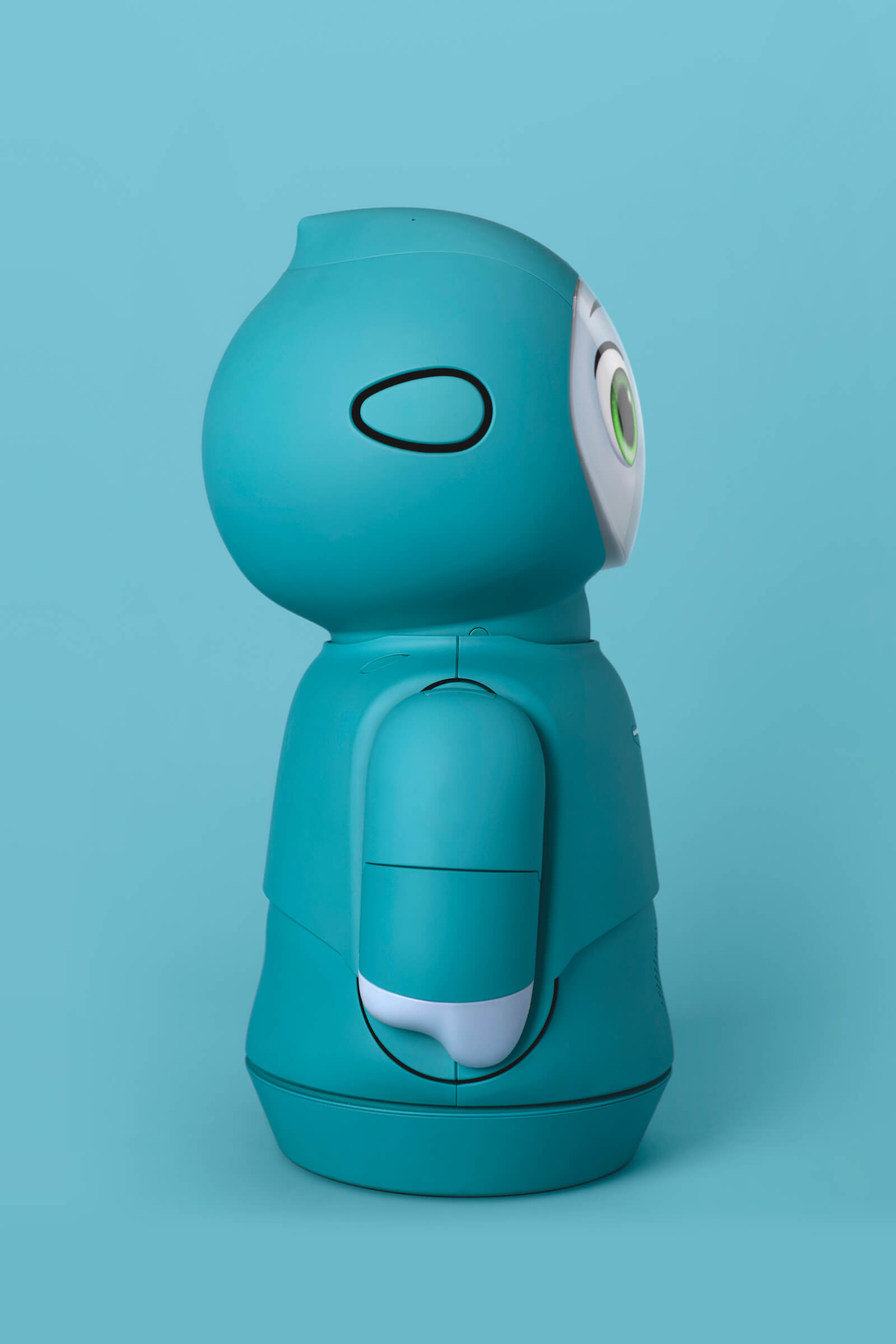 Moxie is one of the latest robots designed to at once incorporate AI and appear cute and unthreatening, extolling machine learning’s virtues rather than its more intimidating aspects. Well-known earlier examples include Pepper, Cozmo and Keeko, which is being deployed in Chinese schools. Then there’s Scribit, which, while not humanoid, performs humanistic behaviours, such as mandala drawing.

Instead of taking on hyperrealistic forms – like the androids in Ex Machina and Sophia the Robot, the world’s first robot citizen and the “first robot Innovation Ambassador for the United Nations Development Programme” – these gentler-seeming products create a psychological distance between the human and the machine. Their cartoon-like interfaces help them to seem sentient and well-meaning while avoiding creepy uncanniness. 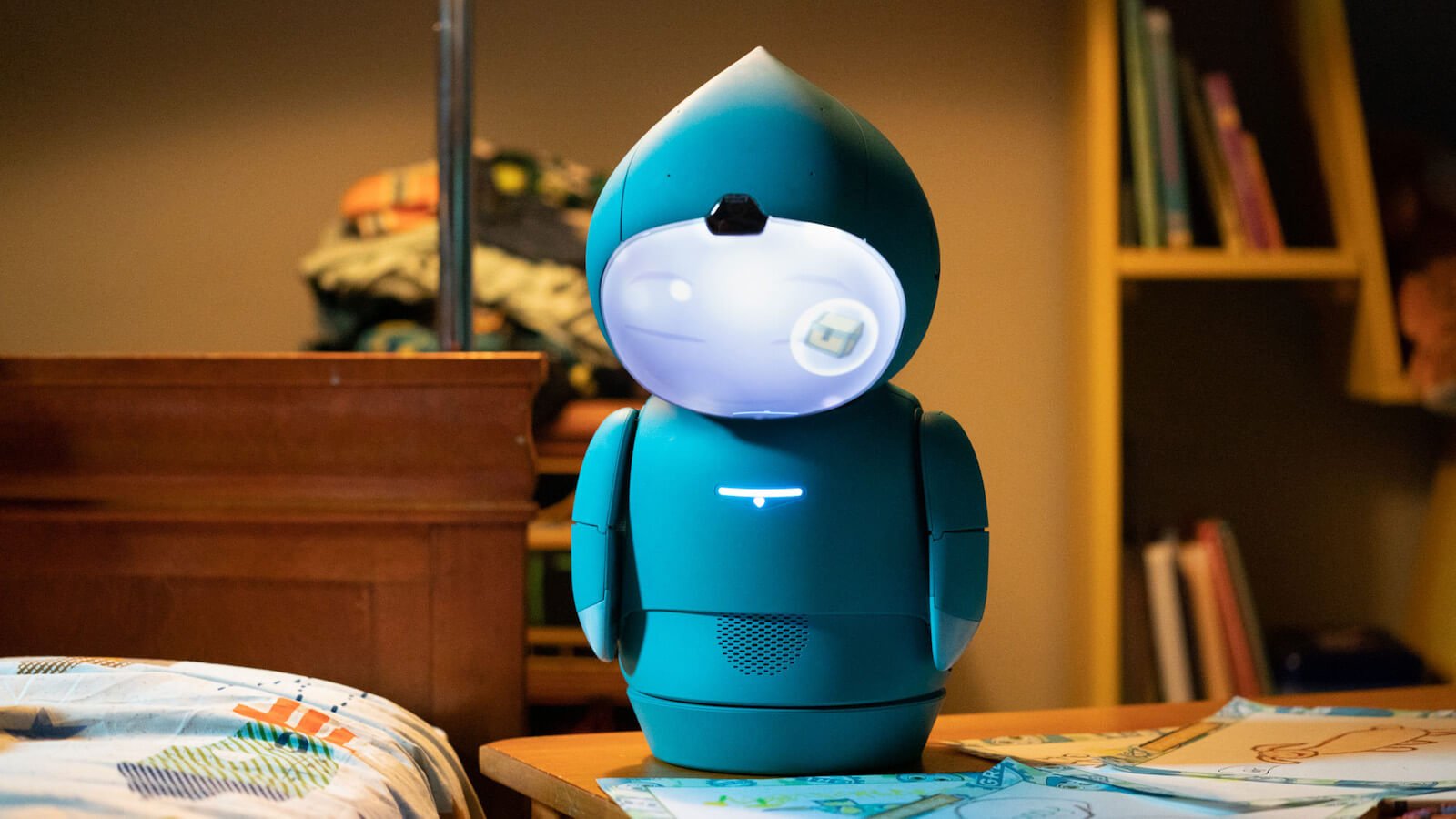 Moxie, for its part, is designed for lovability. The friendly robot’s simple, light-powered facial expressions range from happy to vulnerable, from interested to concerned – so designed to “protect children from excessive screen-time, help them more easily recognize certain emotions, and make the interaction experience feel all the more real.”

All its features, the designers say, come together to tell “an otherworldly story about Moxie as a friendly companion from The Global Robotics Laboratory (G.R.L.) sent out as a robot ambassador with a mission to learn what it means to be a good friend to humans.” That’s undeniably adorable – and for a tool (amongst many) that helps kids to feel power over their own narratives, it’s also a great origin story.

For Embodied, Yves Béhar’s Fuseproject has designed an AI robot for children across the ability spectrum, from neurotypical to neurodivergent.