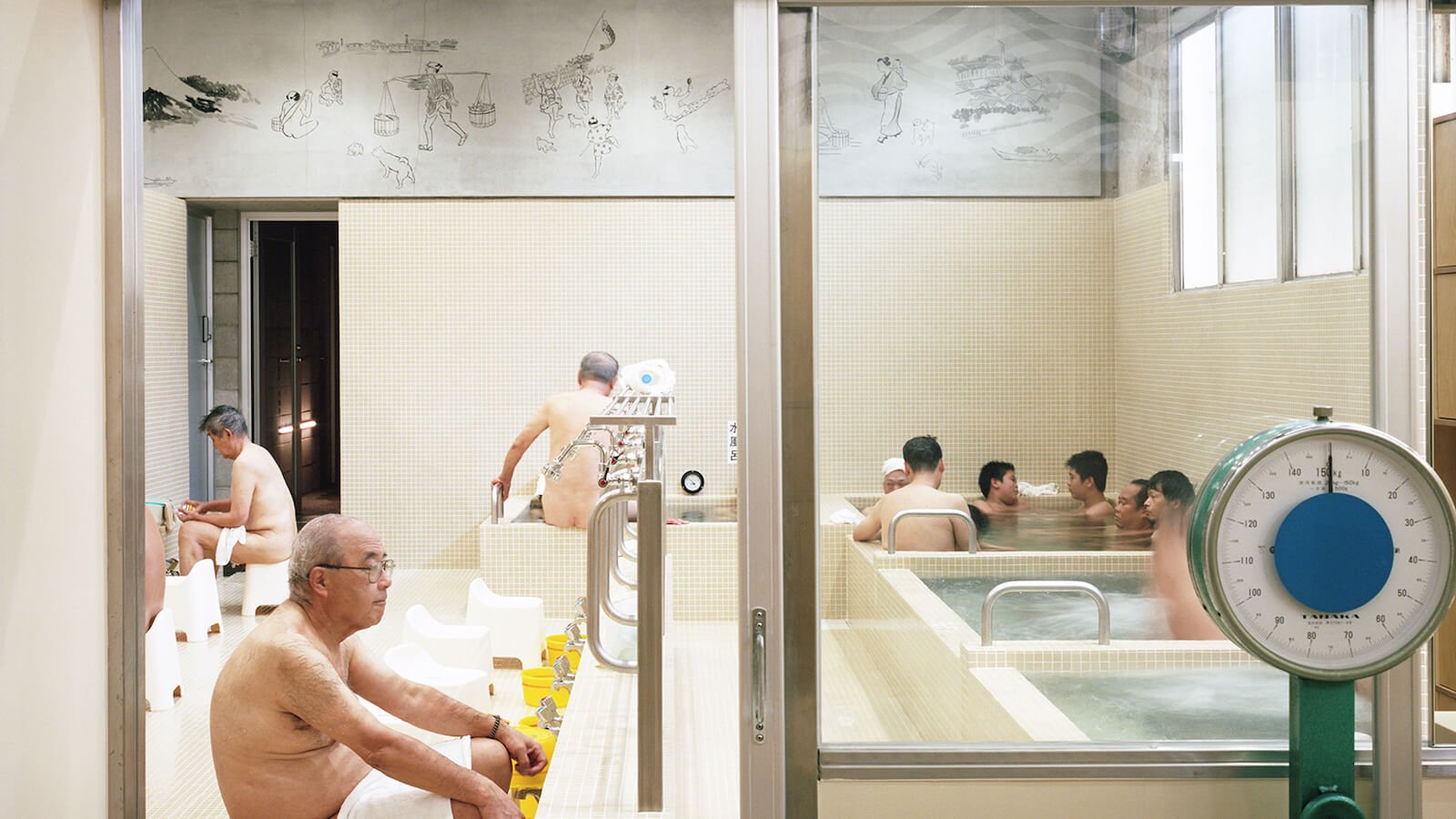 Koganeyu revives the Japanese sento tradition of public bathing for the 21st century.

Even for the most privileged among us, our natural, physical processes are often imbued with occasional feelings of shame and inconvenience. Simply finding a bathroom can be a fraught and even hostile experience, with such basic bodily functions frequently relegated to the faraway fringes of North American public life. It shouldn’t have to be that way; in Tokyo, it isn’t.

Ahead of the city’s planned 2020 Olympics (now taking place in 2021), a series of accessible and inclusive lavatories designed by the likes of Shigeru Ban and Tadao Ando now grace the city, deftly combining privacy and comfort with unapologetic, architecturally assertive urban presence. And in the bustling Sumida ward, a public bathhouse by local studio Schemata also revitalizes the Japanese tradition of communal cleanliness.

Dubbed Koganeyu, the renovated facility brings new energy to an erstwhile tradition. Known as sento, bathhouses were long a staple of Japanese community life. The near-universal proliferation of private toilets led to the closure of all but a handful of Tokyo’s sentos. But while the practical necessity of communal bathing is long obsolete, Koganeyu proves that the shared experience is anything but.

Framed in raw concrete, monochromatic tile and simple blond wood finishes, the space replicates the efficient layout of the former bathhouses while adding deft aesthetic touches that reinforce a sense of community.

It starts with a beer. In the street-facing reception space, Schemata installed a small bar, offering men and women a casual shared space to enjoy a drink and conversation under the warm lights. Here, the refined interplay of small tiles and natural accents introduces an ambience that carries through the entire facility.

Inside, the men’s and women’s bath areas are separated by a 2.25-metre wall, with the two rooms linked by an open ceiling that, together, replicate the traditional sento configuration. 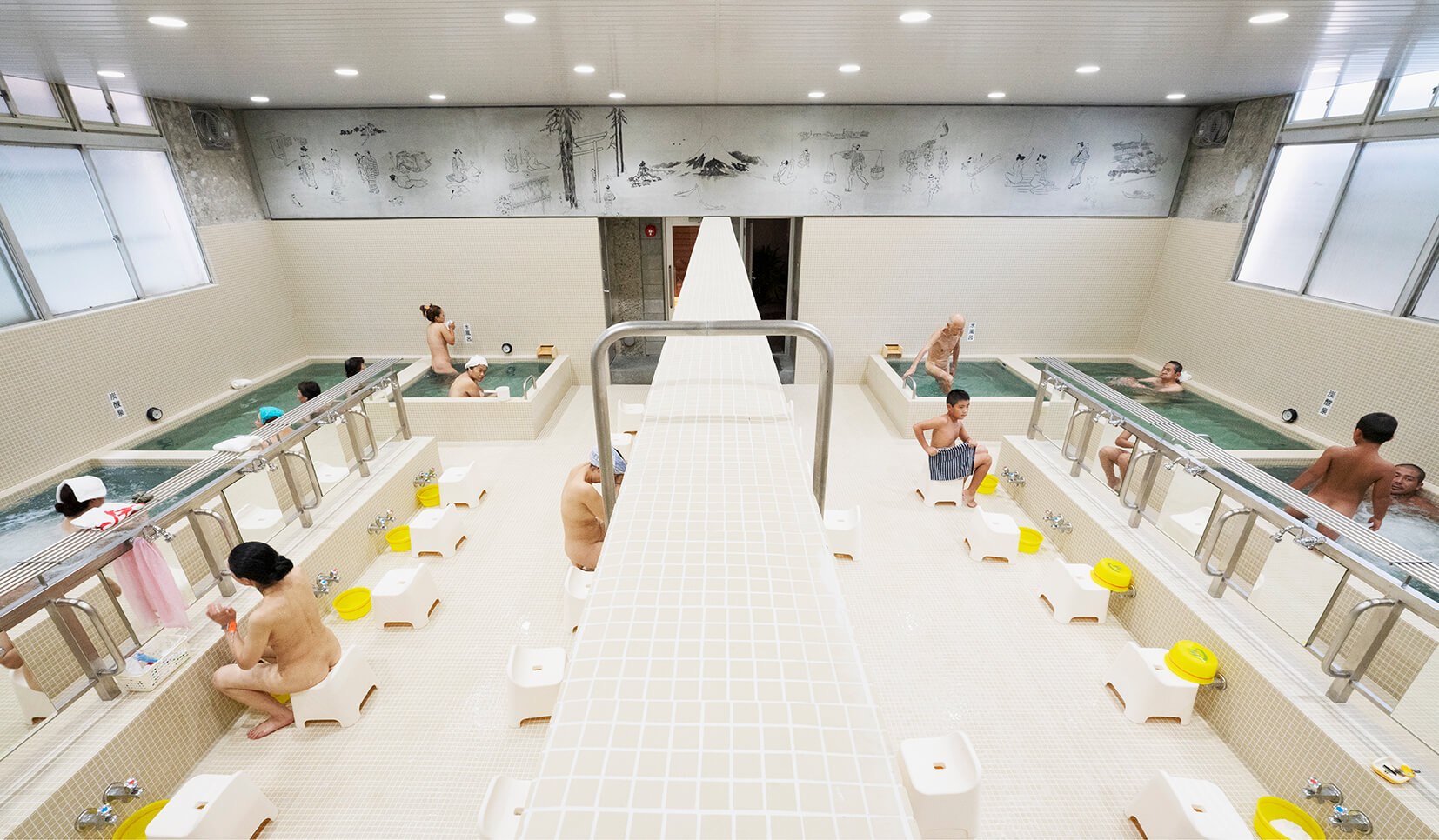 “We paid attention to the separating wall between men’s and women’s bath areas, which does not reach the ceiling and leaves an opening between the top of the wall and the ceiling,” notes Schemata, emphasizing the communality fostered. “It is convenient for families — male family members and female family members can call out to each other to check if they are ready to get out.”

Above the party wall, a mural of Mount Fuji spans both bath areas. Painted by artist Yoriko Hoshi, the scene depicts vignettes of traditional life that deliberately transcend established male and female gender roles. Above the change rooms, meanwhile, Iichiro Tanaka’s split curtain mural gently delineates gendered spaces, with a central handrail shared by both sides of the room.

In commissioning both artworks, Schemata emphasized a desire to break down gender distinctions despite maintaining separate spaces, with the theme of “sending one’s heart to someone” defining both works.

While the murals — and the shared handrail — express a spirit of intimacy, fluidity and connection, this atmosphere also quietly permeates throughout the bar, saunas and small pools. What better place to enjoy a bath and, in Schemata’s words, “enhance warm-hearted connections in the community”?

Koganeyu revives the Japanese sento tradition of public bathing for the 21st century.