Charting Sebastian Herkner’s Rise to the Top
At 35, Sebastian Herkner has become one of Germany’s premier design exports, with more than 10 products launched this year alone at IMM Cologne. Elizabeth Pagliacolo reports on his rise to the top. 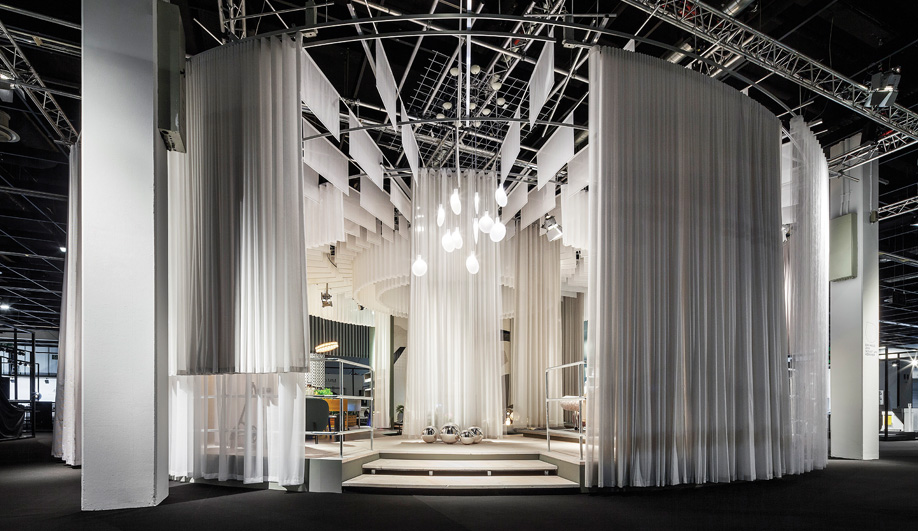 Herkner’s vision for the central installation at the Frankfurt furniture fair, broke down barriers. The house was encircled with curtains, giving way to a welcoming, free-flowing environment with no walls. 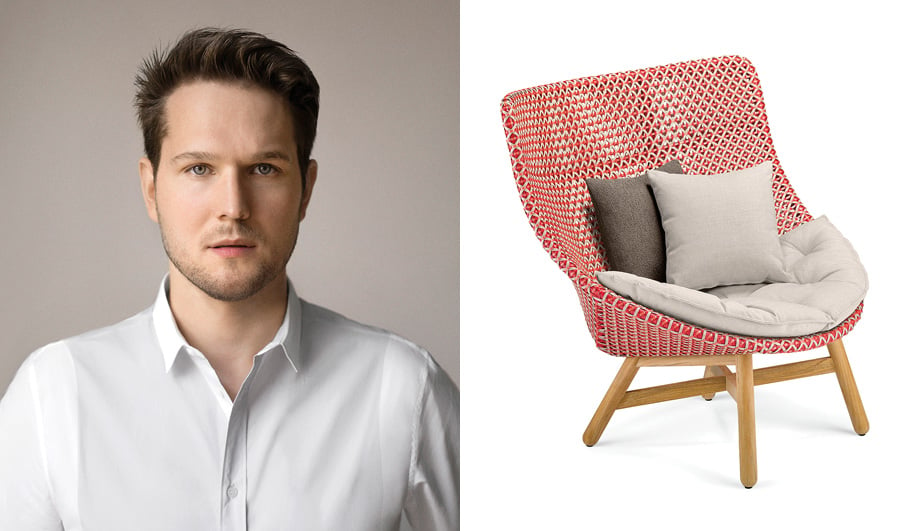 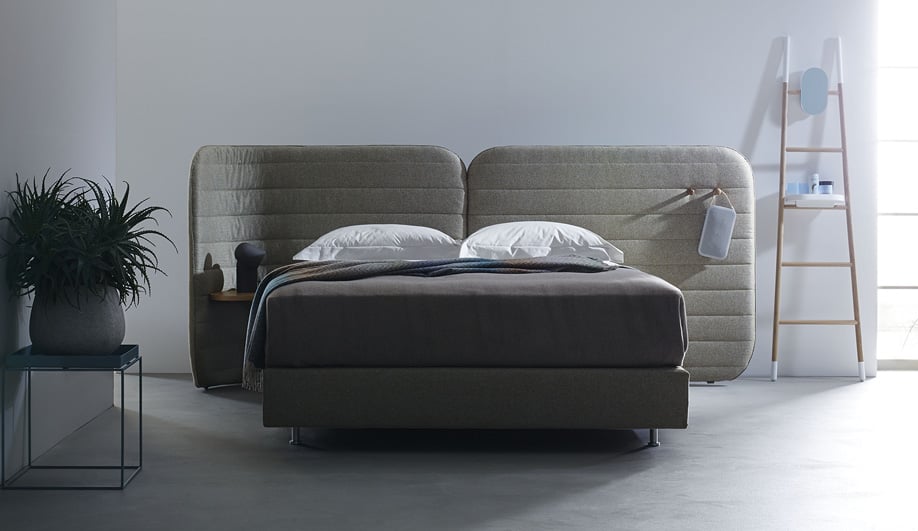 Designed for Schramm Werkstätten, the Pure­beds bed collection features a padded headboard that curves at either end. 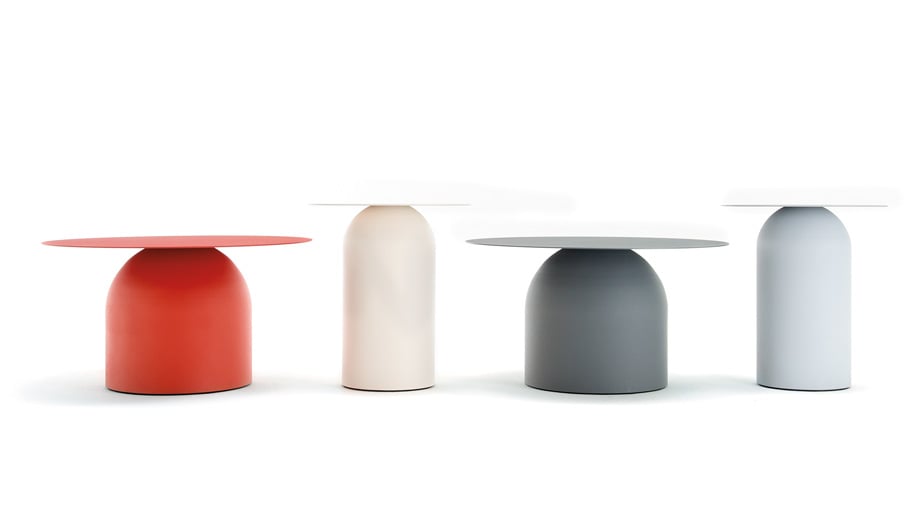 Ultra-thin tabletops balance on bell jar bases in this new collection of steel side tables, made for Freistil of Germany. 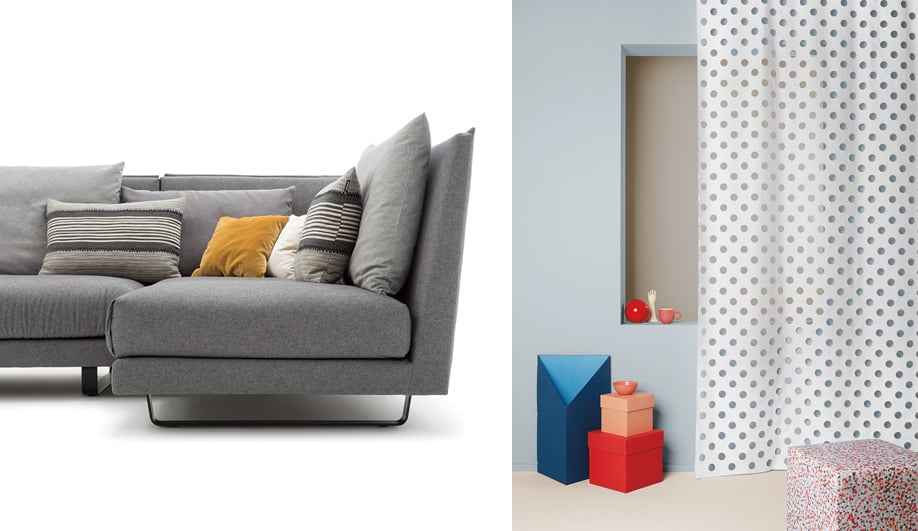 Left: Herkner gave this sofa for Rolf Benz an upward-tapering backrest that’s reminiscent of a Victorian stand-up collar. Right: In lieu of walls for Das Haus, Herkner used 1,000 square metres of Lou, an ultra-light polyamide fabric with perforations, made by Nya Nordiska. 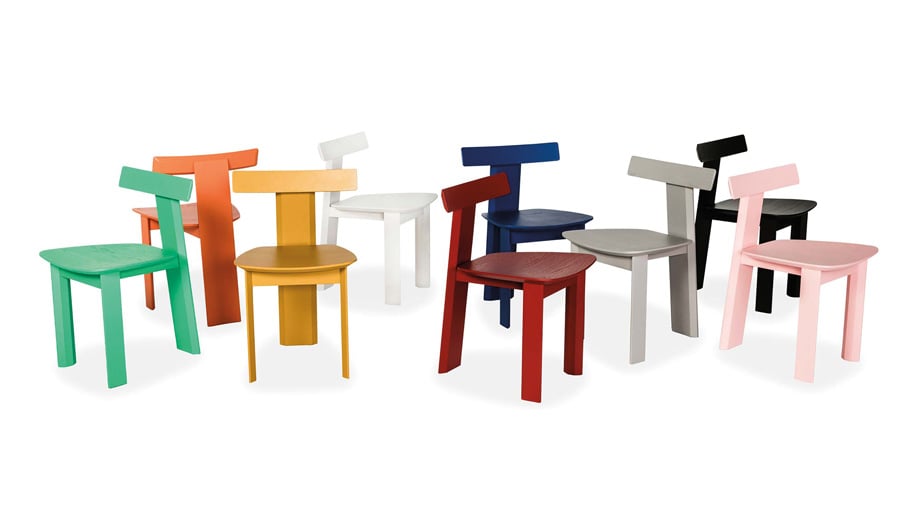 The spine of Mark, designed for Linteloo, is as wide as a plank. The T‑shaped backrest makes it easy to lift, move or hang a coat on. 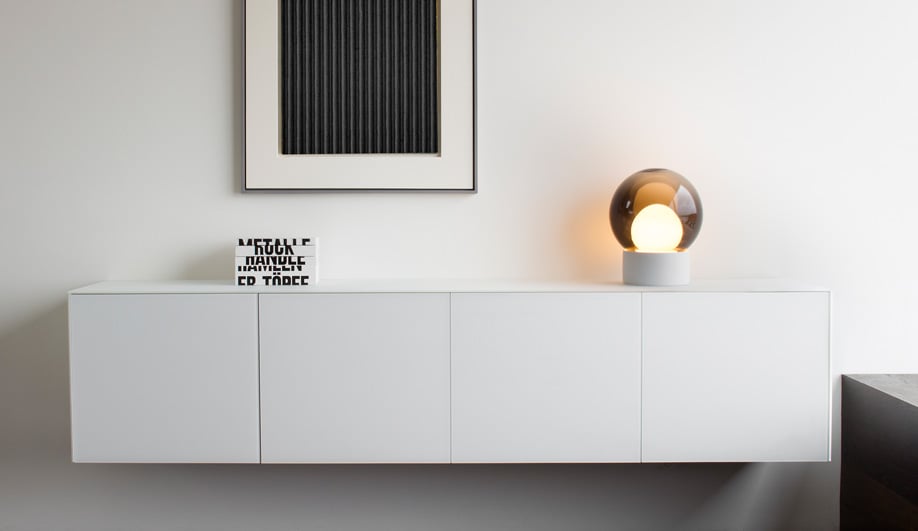 For the Boule Light, by Pulpo, a hand-blown glass orb surrounds a frosted bulb nested in a porcelain base by Rosenthal. 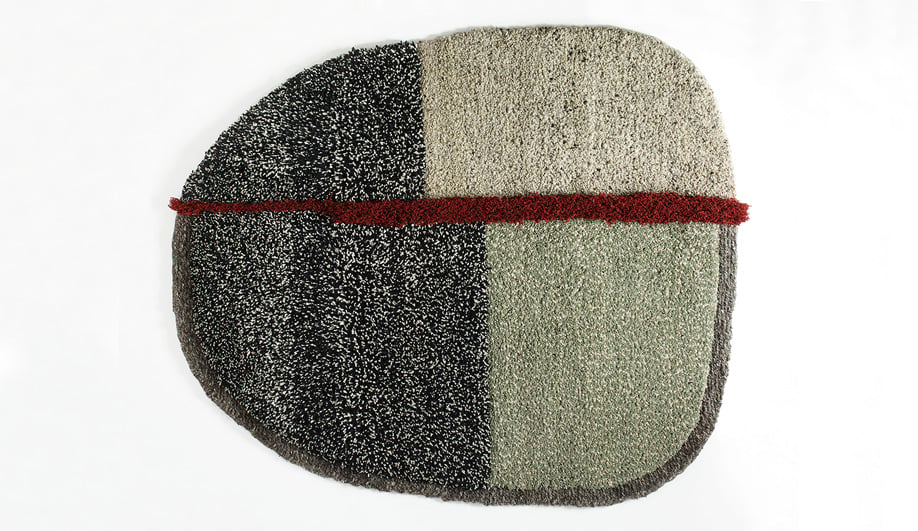 Working with artisans in Bogotá, Herkner produced a series of hand-loomed rugs for the new German company Ames. 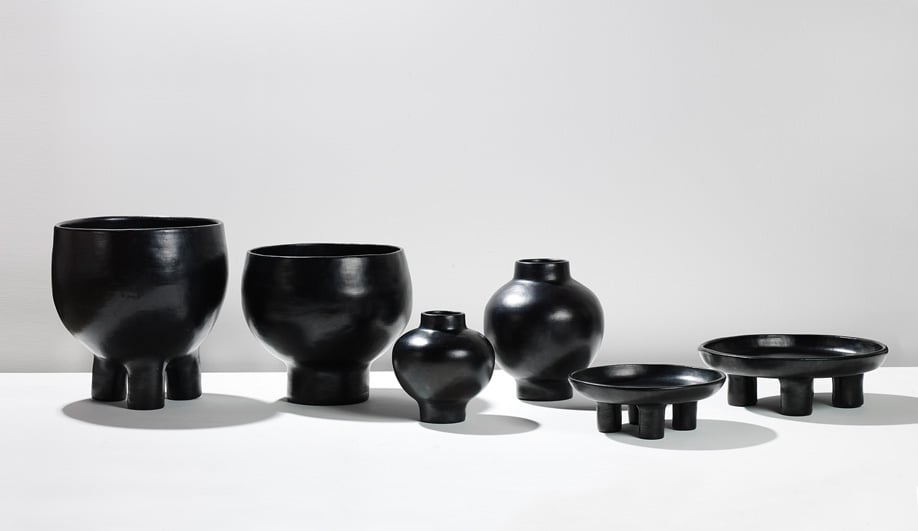 These heavy-footed Barro pots, vases and trays in black terra­cotta were crafted in Colombia for Ames. 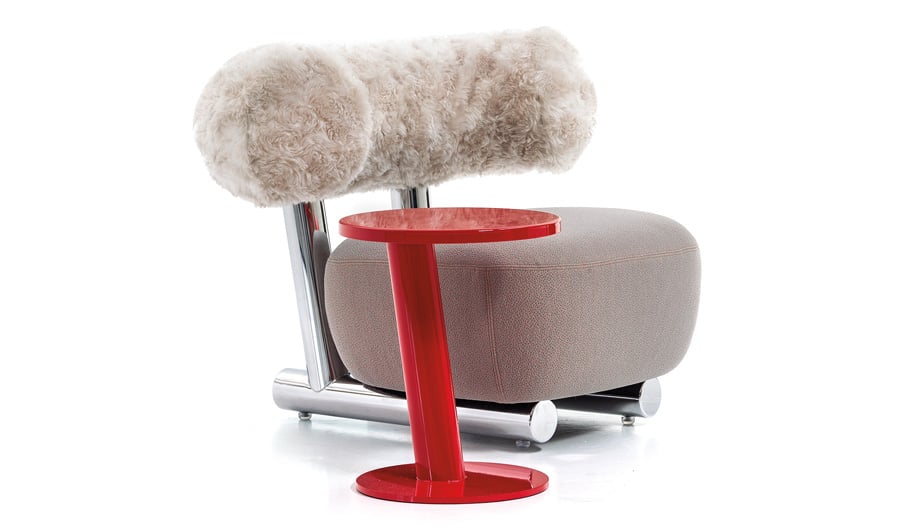 With more than 10 products launched this year alone at IMM Cologne, the 35-year-old German designer has cemented his position as a veritable wunderkind.

Das Haus, the central installation at IMM Cologne, almost seemed like an act of defiance. Back in April 2015, when Sebastian Herkner was chosen to design it, he decided to make a statement about openness at a time when Europeans were being called upon to accept Syrian refugees into their collective home.

He conceived of the circular “house,” with its many entry points and soft curtains (like a spiral of onion layers) taking the place of solid walls. But as the furniture fair opened in January, a more heated debate was sweeping the country, mere weeks after hundreds of women had reported assaults by groups of men, among them purported asylum seekers, during New Year’s Eve celebrations in Cologne.

I first meet with Herkner at the entrance to Das Haus, where I find him in conversation with a group of journalists, reiterating its deeper meaning. “With the current political situation, we have to be open,” he says. “As designers, we should be as curious about our new neighbours as we are about materials and the future of design, architecture and art.”

Tall, handsome, and effortless in his friendly manner, he also exudes a no-­nonsense pragmatism that comes across as endearing. As chatter fills the space, he wordlessly takes my iPhone and begins to speak directly into the recorder while he leads me through the installation, delivering an energetic yet well rehearsed rendition of the space’s virtues. “It’s important that people also taste the house,” he explains, indicating the communal kitchen, where servers are ladling out an aromatic stew to visitors.

In the bathroom space, the walls are tiled in off-white bars of soap made at a factory down the street from his live-work space in Offenbach, a city southeast of Frankfurt. The floral notes waft through the house, just as they do in his studio. The idea is to create a home that “you really remember, one where you remember the experience of being there,” he says. Employing the local soap factory for the installation is one way he sees design as a tool for openness, a bridge that links old-world products and processes to the future.

Since Patrizia Moroso took notice of his work in 2011 at Salone Satellite in Milan, where young designers exhibit their work during iSalone, Herkner has become one of Germany’s most promising exports. Before then, he was employed as an intern for Stella McCartney in London. After the Moroso encounter, he worked with such coveted brands as Cappellini, ClassiCon, and Avenue Road in Toronto. In the process, he has become a model for his generation, the wunderkind among a cadre that includes designers Sarah Böttger, Hanna Krüger, Kilian Schindler, and Steffen Kehrle, with whom Herkner “grew up” at design fairs.

For the Boule Light, by Pulpo, a hand-blown glass orb surrounds a frosted bulb nested in a porcelain base by Rosenthal.

The Das Haus theme is rooted to his home country, with most of his new launches being for German manufacturers. In the central living area, his Mbrace lounge chairs for Dedon sit front and centre, complemented by Boule light fixtures for Pulpo. Both convey what Moroso spotted six years ago: his honed eye for mixing materials, textures and colours. His lights for Pulpo, which sit on a porcelain base by Rosenthal, demonstrate that he has now graduated to combining techniques from multiple manufacturers.

Another of his talents lies in sussing out a manufacturer’s potential for experimentation. He begins every project by travelling to a company’s headquarters, visiting the factory, speaking with prototype makers and poring over the archives, seeking to envision a product that fits the ethos of the brand – but also “to see if it can be taken one step further.” That added push can work wonders. For Das Haus, he persuaded Rosenthal, traditionally a tableware brand, to make a gorgeous beaded curtain, to be installed in the company’s renovated New York showroom.

Designed for Schramm Werkstu00e4tten, the Pureu00adbeds bed collection features a padded headboard that curves at either end.

His nudge toward a softer, more sophisticated aesthetic also elevates such obscure brands as Schramm Werkstätten, a bed company for which he has designed a bed with a capacious headboard; and Schönbuch of Munich, which commissioned him to create a set of mirrors smartly shaped like a pause button. For Kaufmann Keramik, which specializes in oven tiles, he has crafted embossed wall ceramics with a pattern applied using pastry crimpers.

The most heartfelt line is for the young brand Ames, run by Ana María Calderón Kayser, a Colombian-born German who Herkner says “loves her country, the tradition, the colours, the food. She never became 100 per cent German, which is good.” He travelled to Bogotá and met with mom-and-pop manufacturers, some of whom worked on looms in the courtyards of their homes. The artistic rugs, colourful blankets and pitch-black planters respect the artisans’ traditions, yet they telegraph Herkner’s own design language.

“It was important to develop the products with the people,” he says of the final results. With collaborations like these, he reveals a whole new side to German design, one that truly embraces cultural diversity. ­

SHARE
Twitter, Facebook, LinkedIn, Pinterest, Email
TAGS
Furniture, Personalities, Product Design,
AZURE is an independent magazine working to bring you the best in design, architecture and interiors. We rely on advertising revenue to support the creative content on our site. Please consider whitelisting our site in your settings, or pausing your adblocker while stopping by.