We rely on advertising revenue to support the creative content on our site. Please consider whitelisting our site in your settings, or pausing your adblocker while stopping by.
Gallery
Show Us Where You Live: Alex March’s Ludic Barcelona Home-Studio 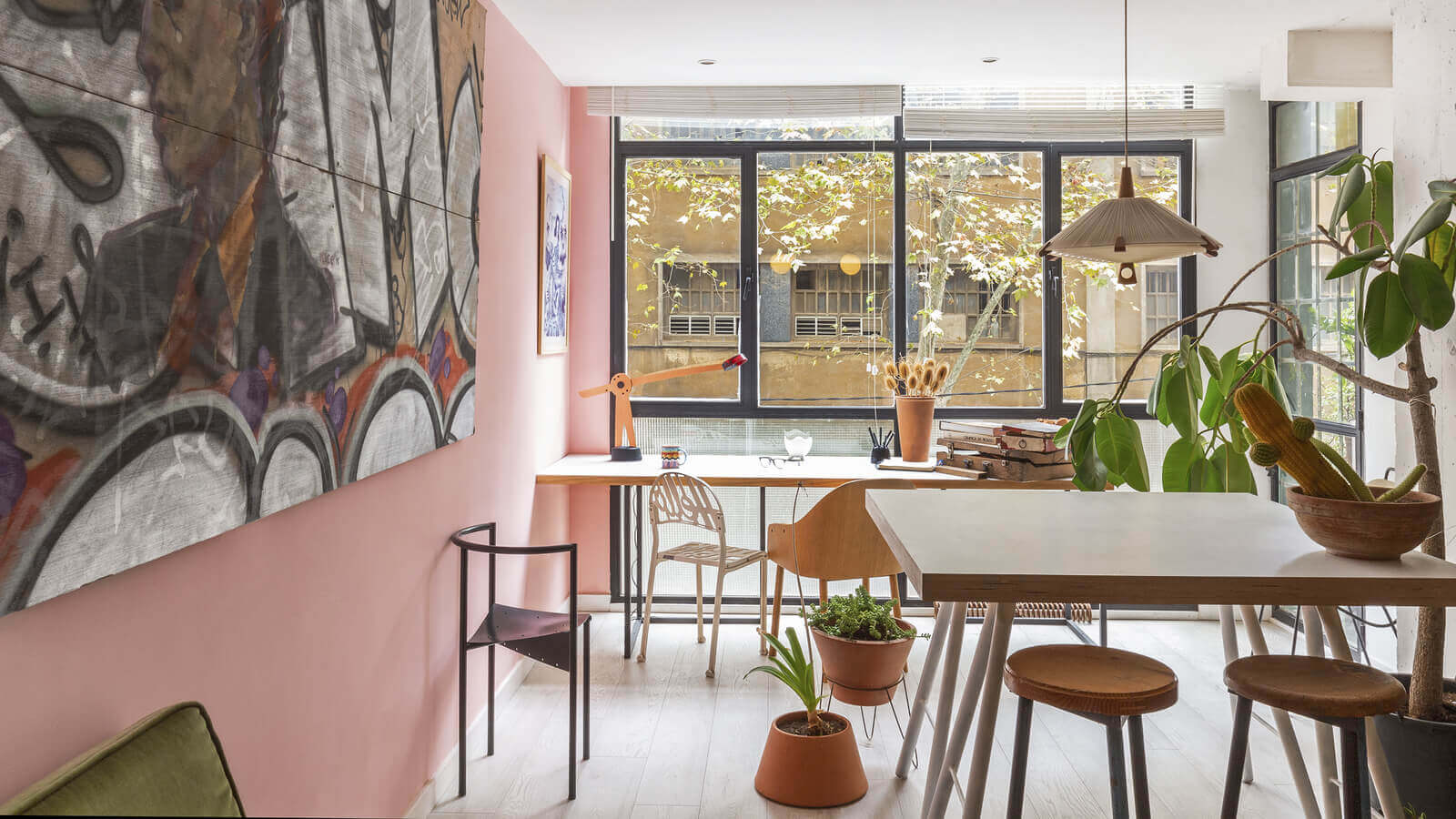 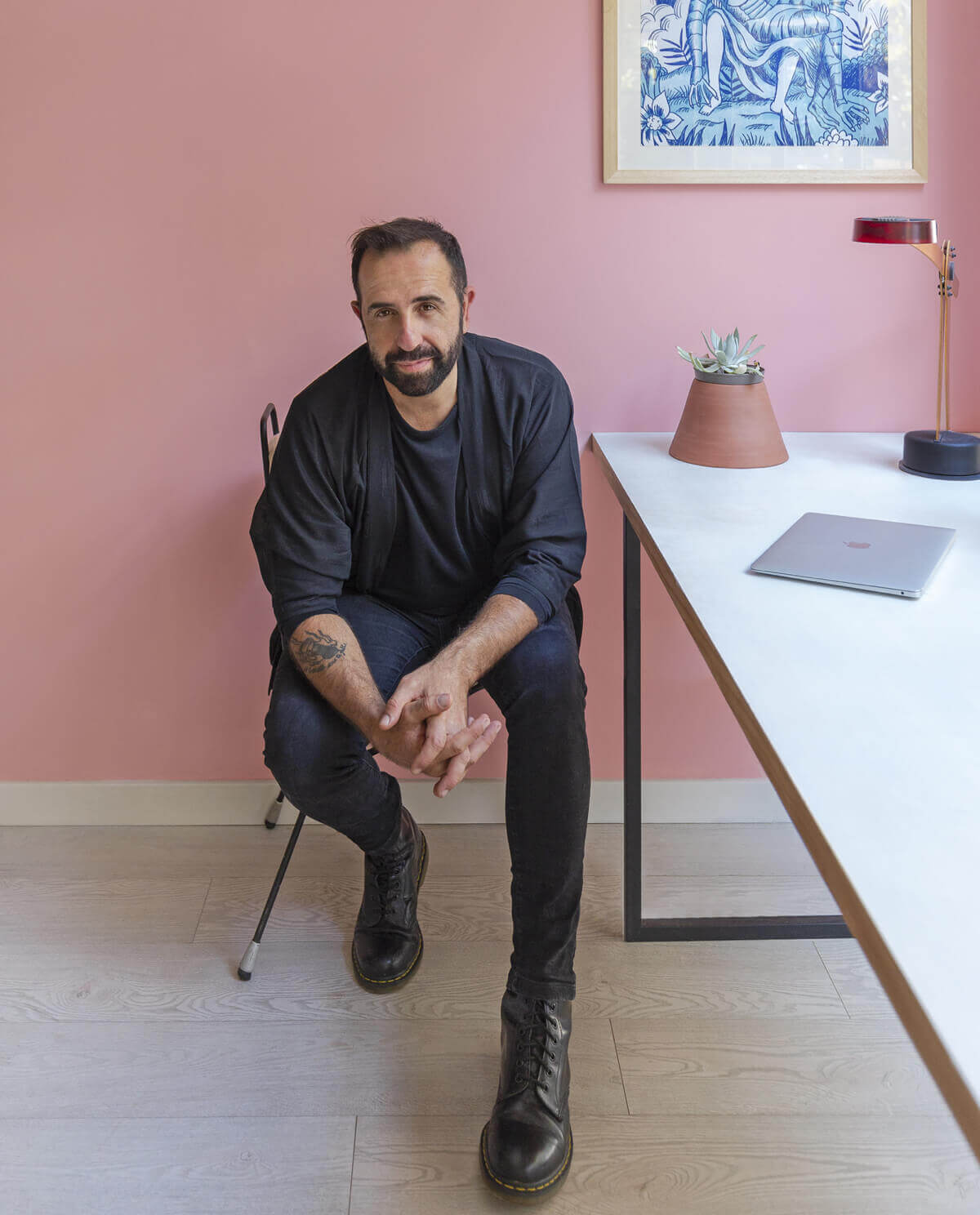 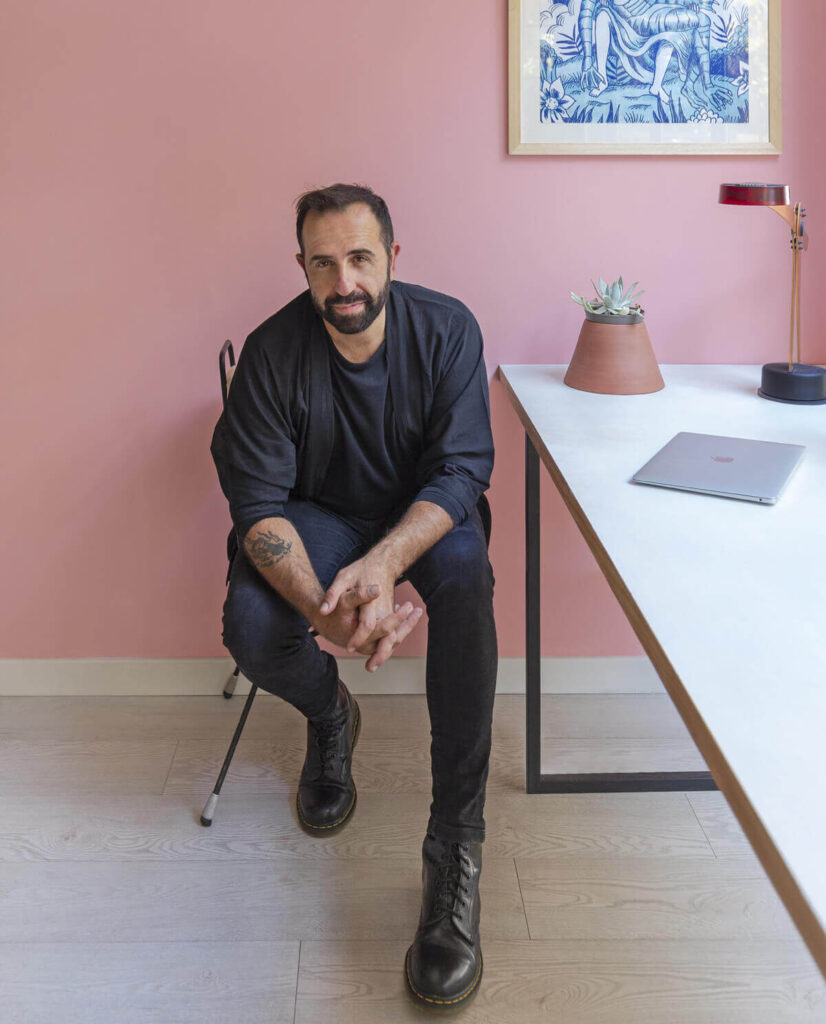 “I’m inspired by beauty,” says Barcelona-based designer Alex March, “which is timeless.” Principal of his eponymous practice, March has conceived many of the Spanish metropolis’ most atmospheric eateries and airy residences over the past decade. In 2015, he set his sights on his own space, intending to shake up his living arrangements and move somewhere new “where you have the opportunity to collaborate with a range of different types of people and discover new synergies,” he says, “where you find atypical and unique spaces.” March eventually came across a vacant property east of the city’s centre and immediately went to work crafting an equally contemporary and eclectic dwelling that features an assortment of custom elements paired with hallmarks of 20th-century design. It also conveniently doubles as his studio. “Very different things inspire me,” he says of his approach, “although, above all, there are two things that prevail: one is nature and the other is the entire heritage of art and design.” 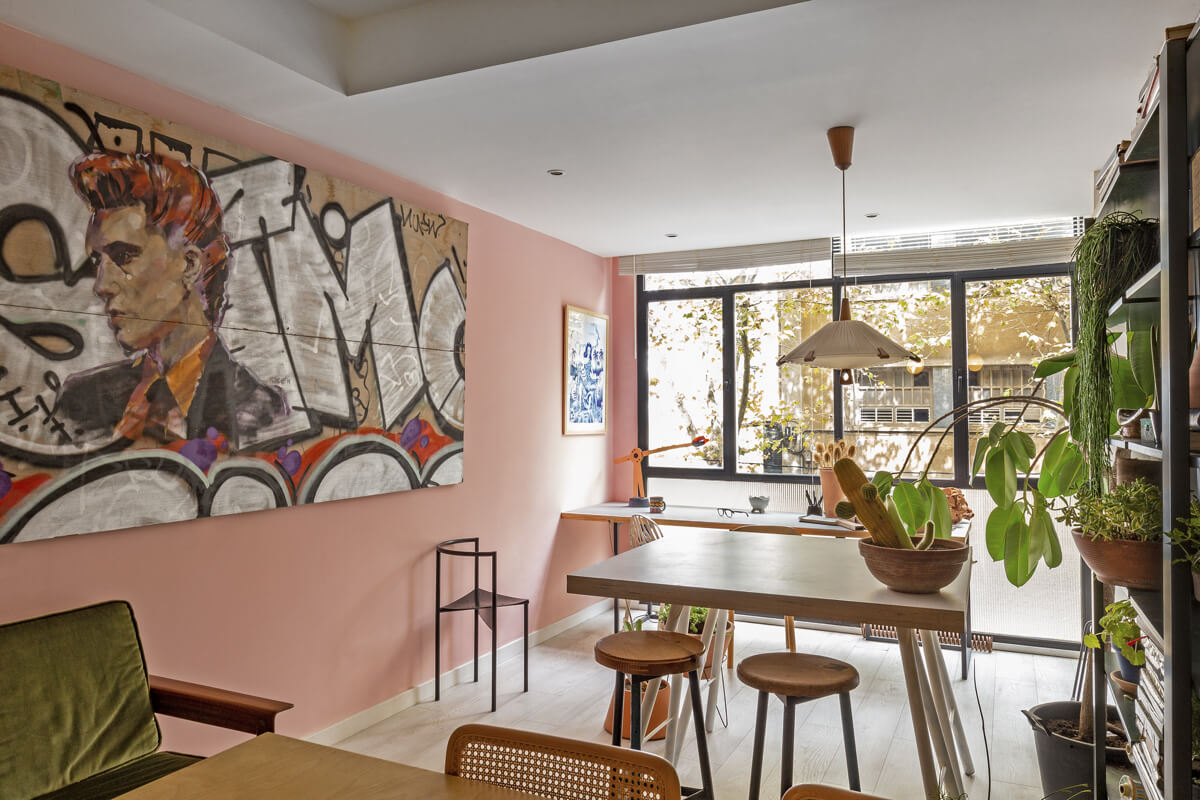 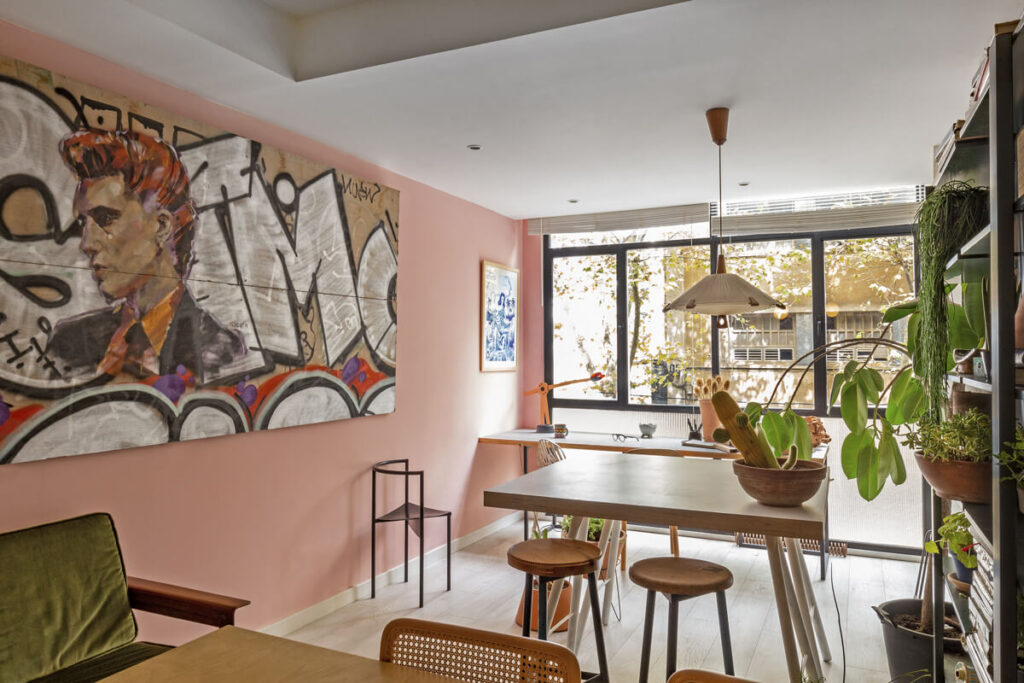 “It was a space with huge windows,” he says of the 180-square-metre unit in the now trendy Poblenou neighbourhood, “which was literally destroyed, but I immediately saw that it had many possibilities.” To transform the existing interior (62 square metres of which are devoted to his practice), March made a number of simple but effective interventions. He laid entirely new blonde oak flooring to not only brighten up the space, but act as the perfect counterpoint to a blush feature wall. Together, they’re the ideal backdrop for the designer’s art and furniture, which includes Philippe Starck’s 1986 Wendy Wright chair. 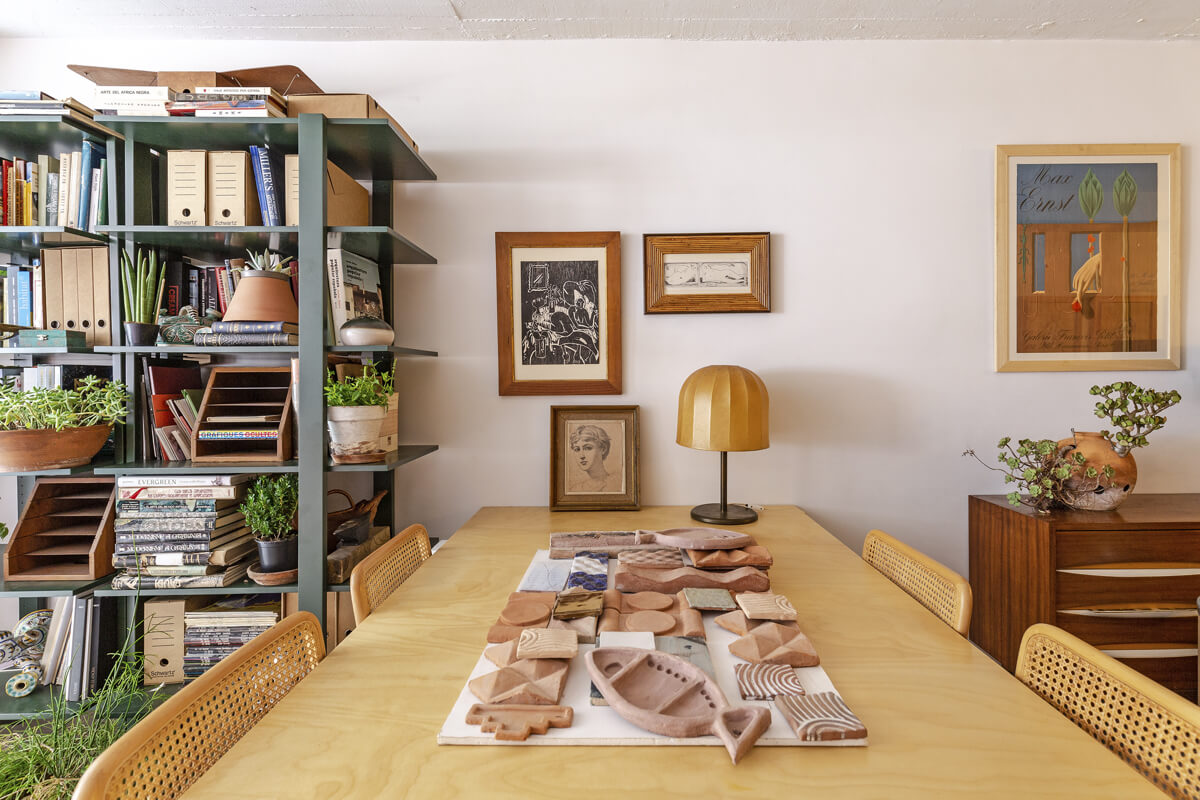 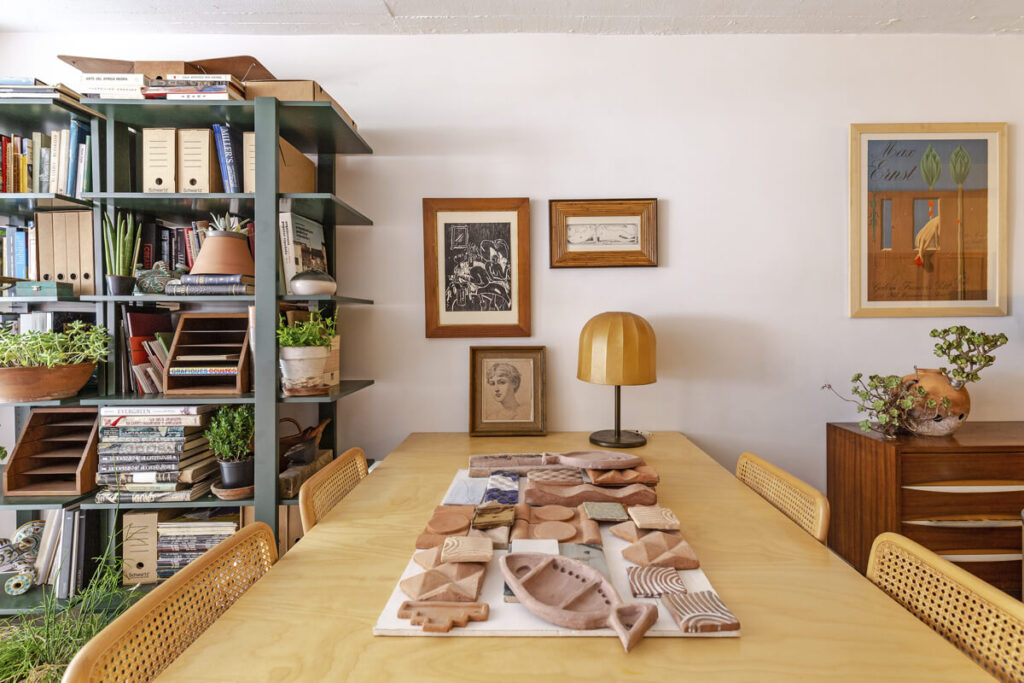 Three long tables provide March and his team with a varied environment in which to work. Fittingly, they’re also defined by a charming collage of design icons. “My grandparents’ house was a real art gallery,” March explains. “That’s what I have been surrounded by since I was little. My taste for mixing was inevitable.” Here, four of Marcel Breuer’s woven Cesca chairs join Achille Castiglioni’s ETA shelves from 1979 and a table lamp inspired by Swedish designer Hans-Agne Jakobsson’s Carolin light from 1963. 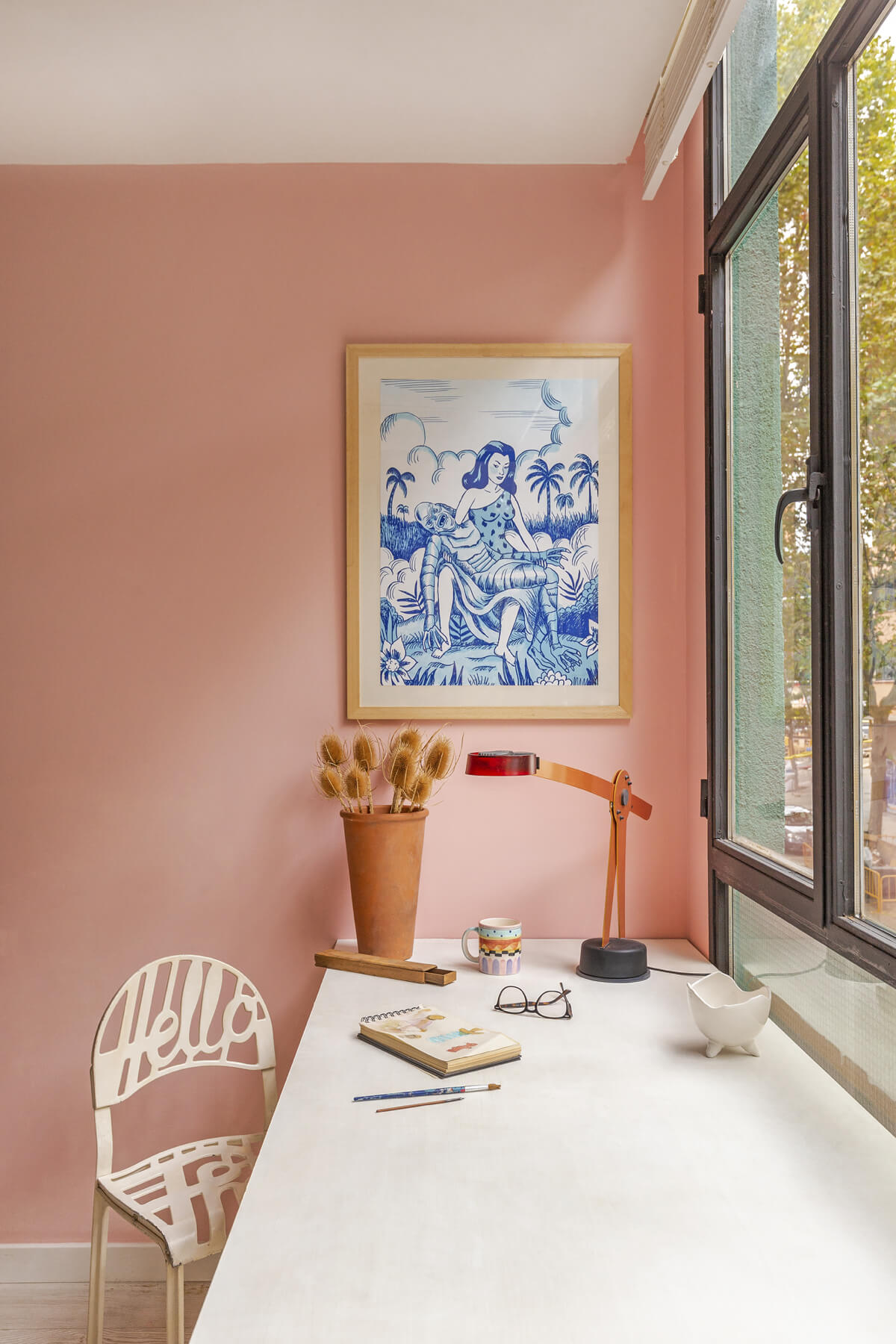 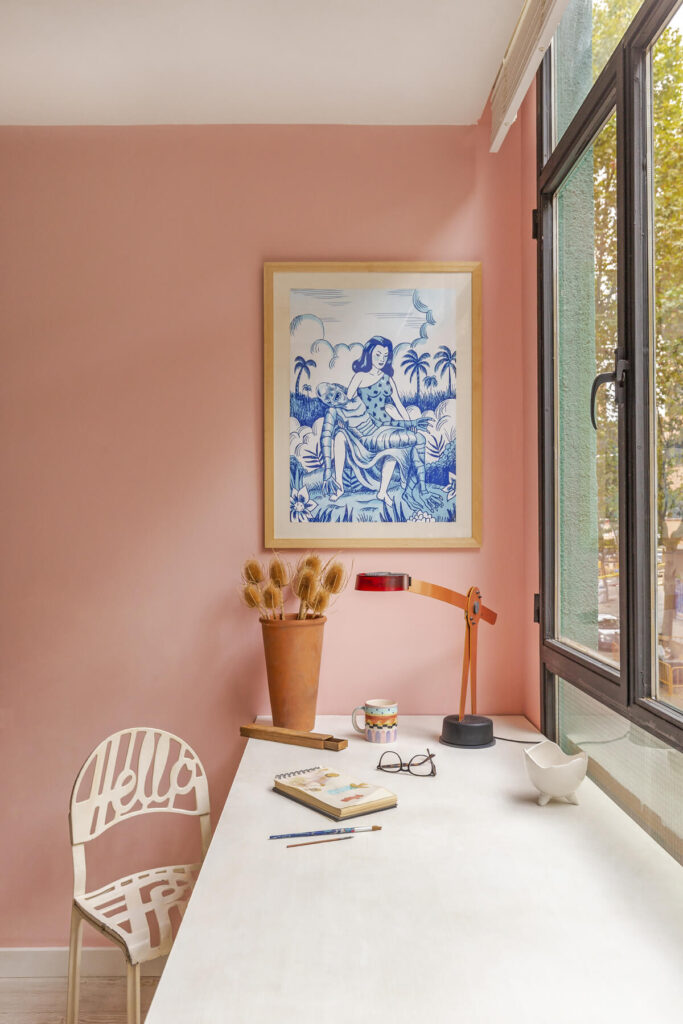 Capitalizing on the ample natural light, March installed a desk along the entire length of windows. The vignette, complete with Jeremy Harvey’s whimsical Hello There chair for Artifort, offers a glimpse into the surrounding neighbourhood where “creativity flows freely,” according to the designer. 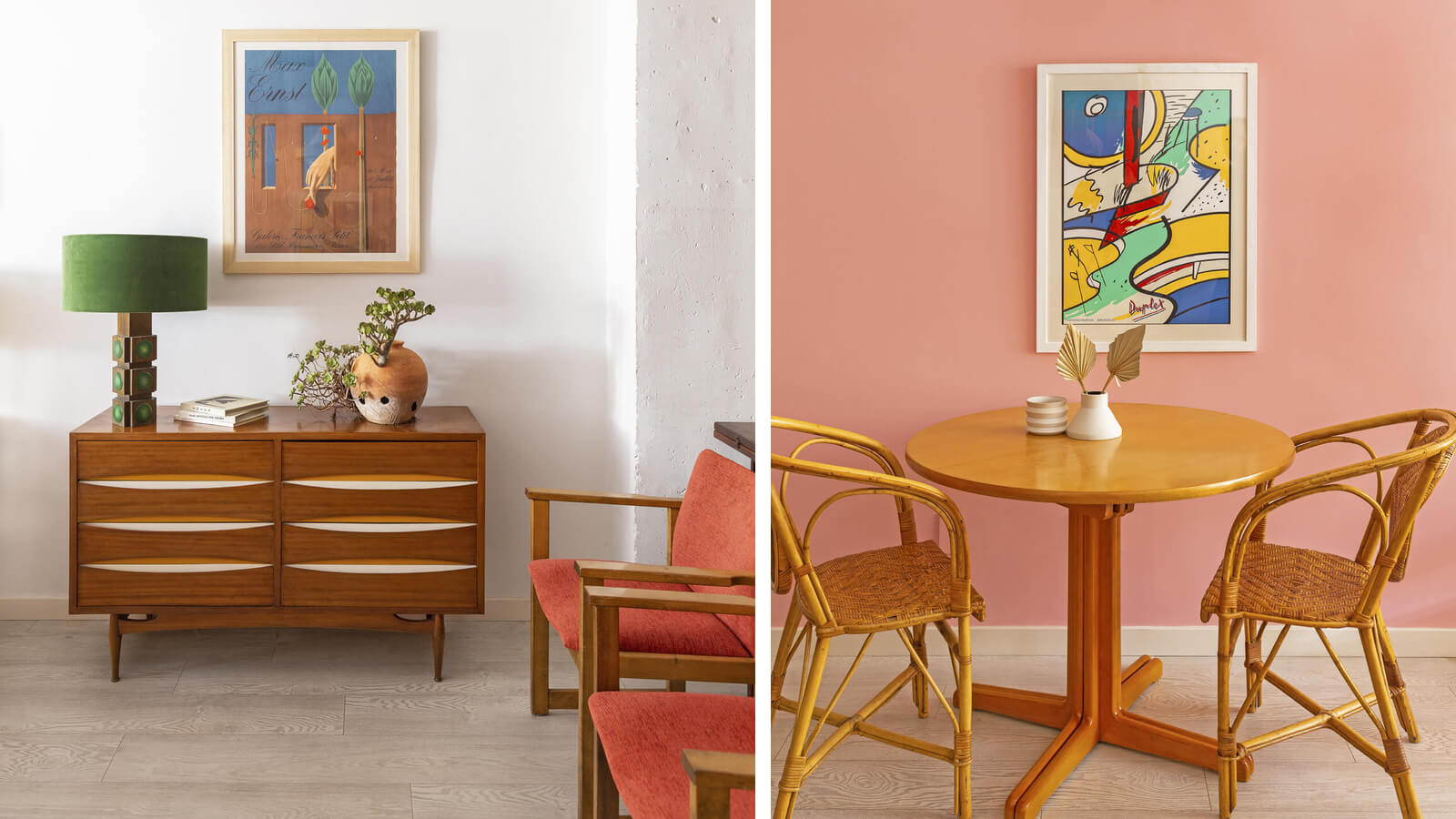 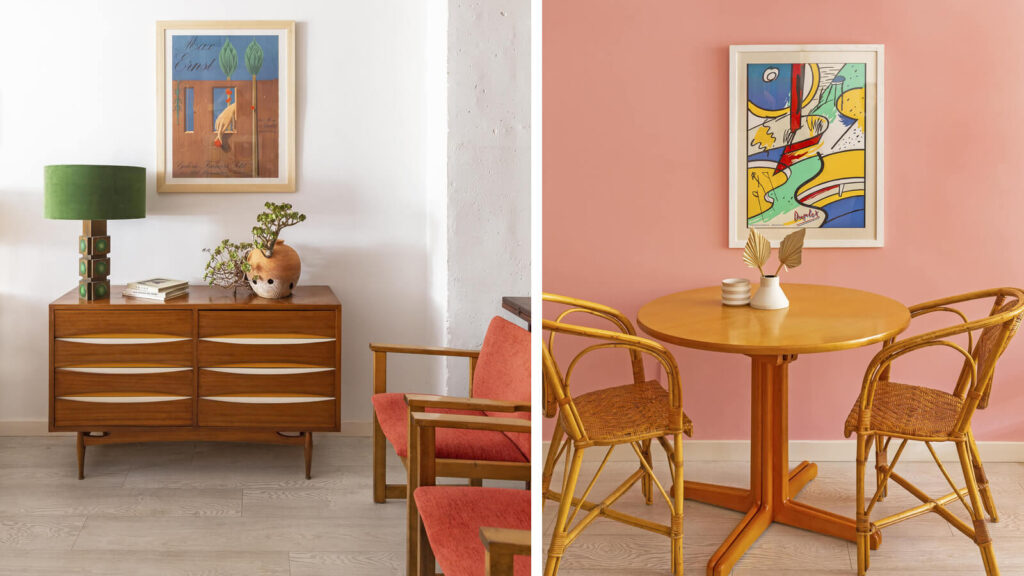 Near the edge of his studio space, a mid-century credenza by Danish designer Arne Vodder is accented by a 1960s lamp from Swedish manufacturer Ateljé Glas & Trä and vintage side chairs. “I have a preference for the [design of] the 19th and 20th centuries,” he says of these sartorial selections, “and for everything current that has something to say.” Elsewhere, two bentwood chairs from local eatery Il Giardinetto — designed in the 70s by Federico Correa and Alfonso Milá — shape a charming bistro tableau. 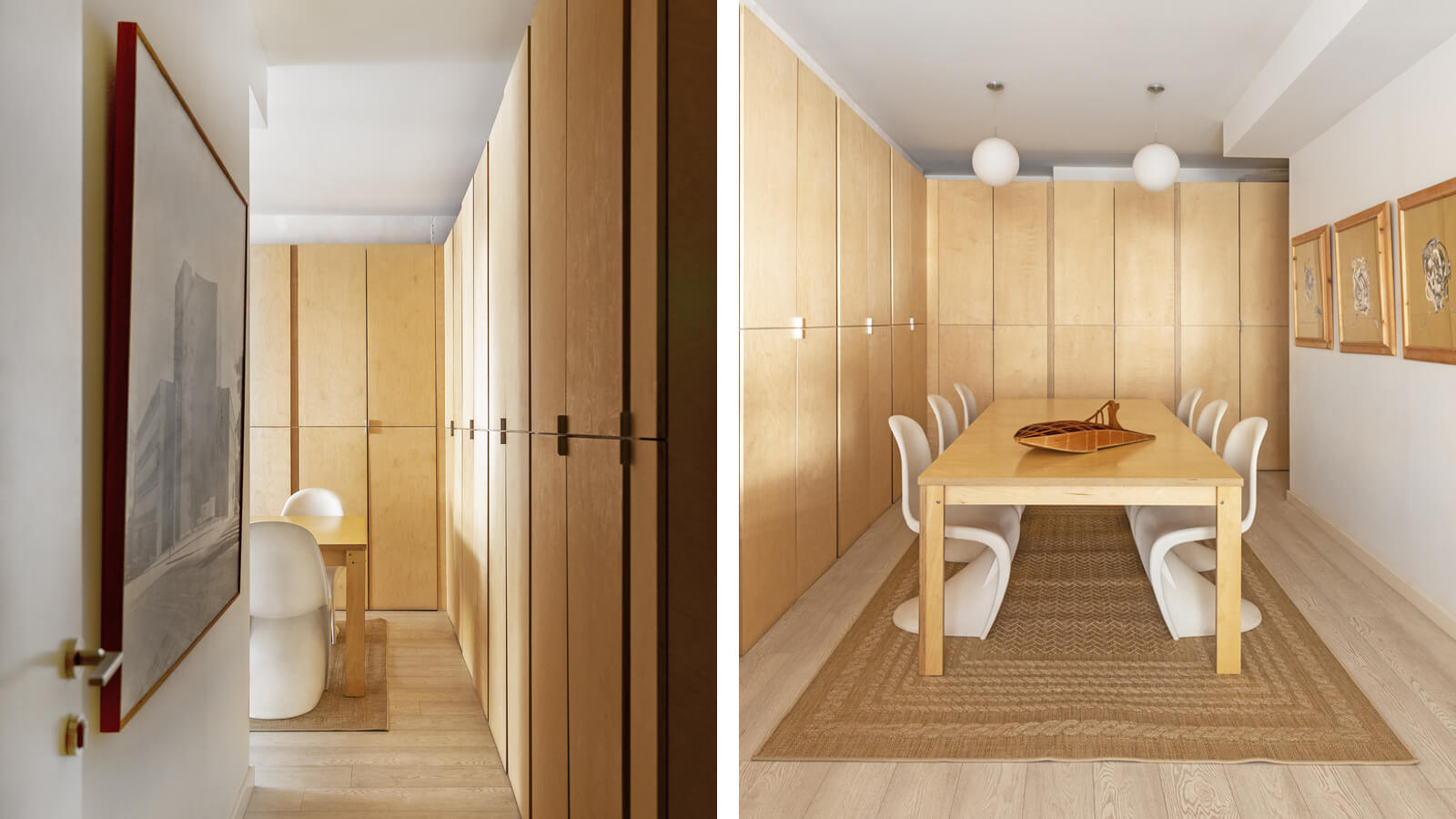 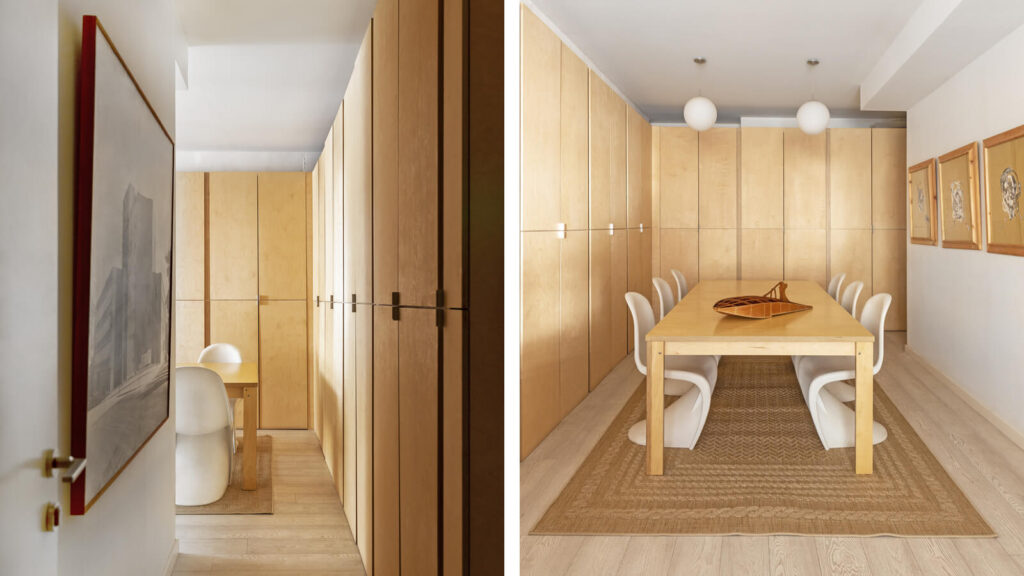 The muted oak parquet continues into the intimate meeting room, which is framed by a custom March-designed L-shaped cabinet that houses his extensive collection of samples, catalogues and growing assortment of pulp material (“Mainly art and design publications from the 60s, 70s and 80s,” he says) behind a series of minimal birch doors. Six white Panton chairs surround the central table, also comprised of birch plywood. A pair of globe pendants above and a woven rug beneath round out the pared-down palette. 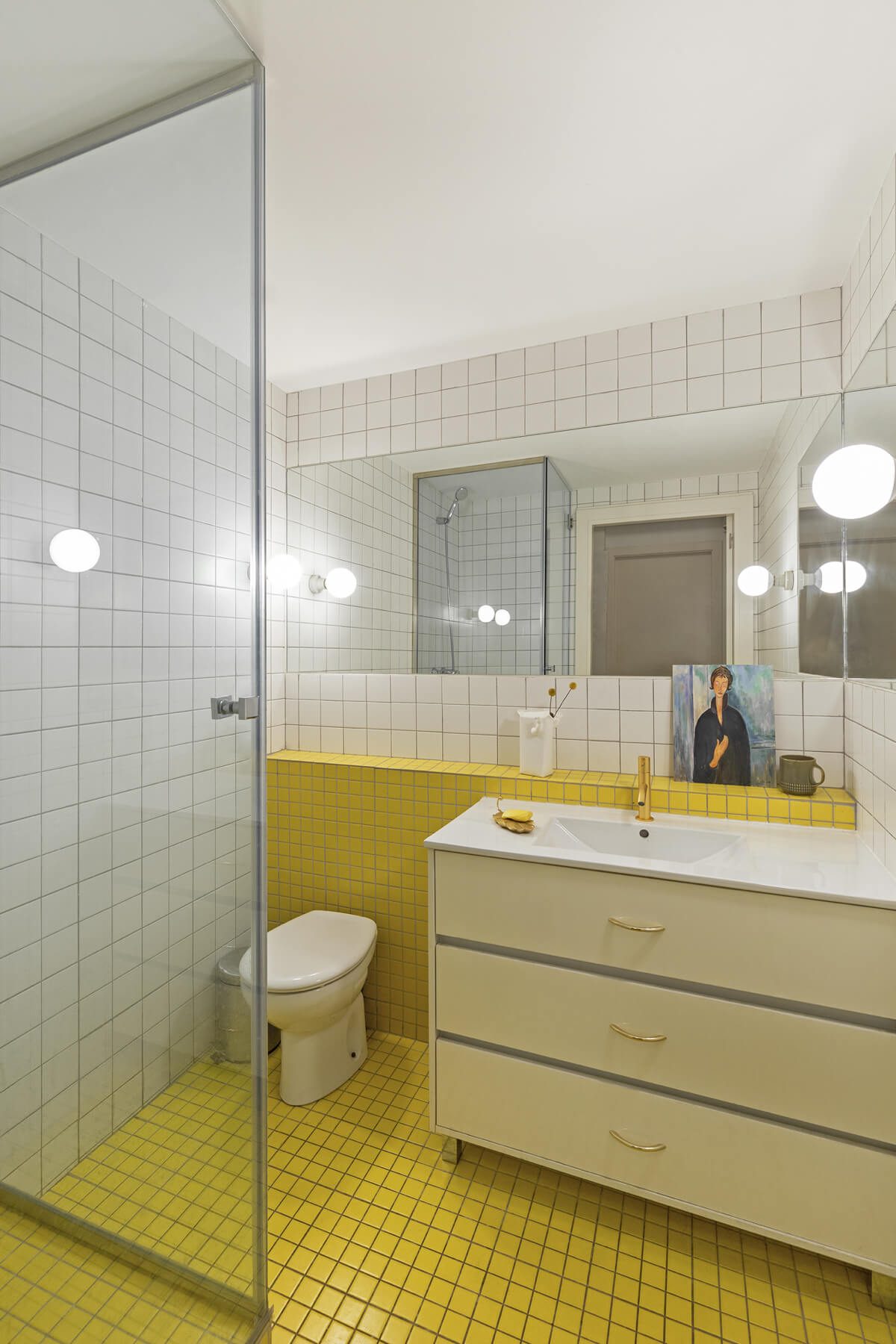 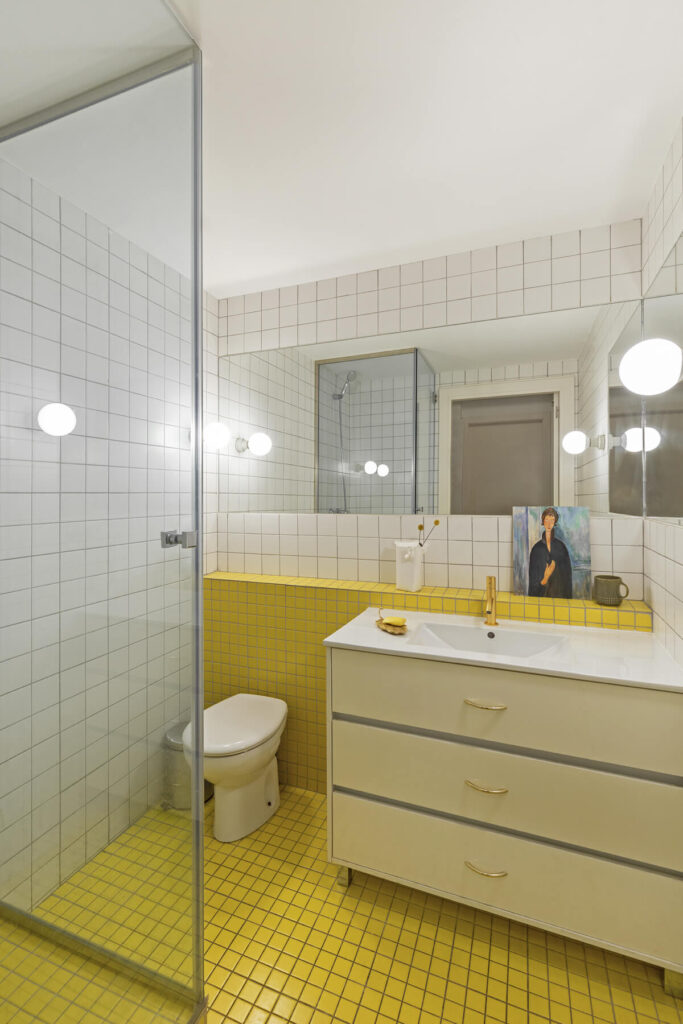 Departing from the warm, idiosyncratic ambiance of the public spaces, the washroom is a study in bold modernity. A grid of crisp white tiles is set off from the brilliant yellow floor, which cascades up the wall to form a ledge that also helps to conceal the plumbing stacks. Carefully positioned sconces give an infinity effect while bronze fixtures and pulls nod to the vintage elements throughout the home. “Nothing has been planned,” March concludes of his charmingly diverse house-cum-studio. “They are all things that inspire me and that I like.”