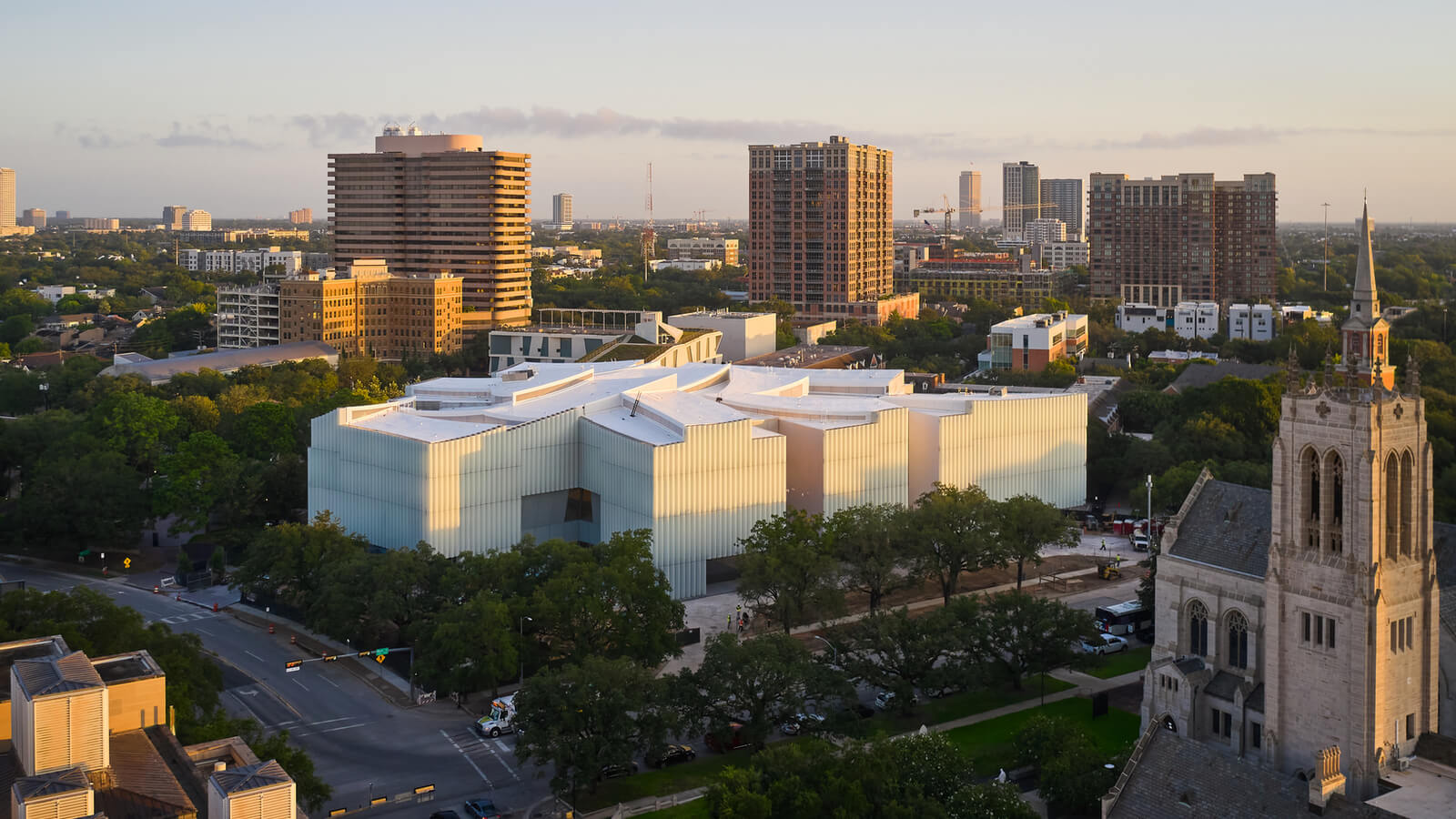 Set to open in late November, the Nancy and Rich Kinder Building is the latest addition to the MFAH’s Susan and Fayez S. Sarofim campus.

Slowly but surely, Texas is becoming a new locus of cultural centres designed by some of the leading figures in architecture, art and design today. While many of these buildings have been in the works for years, 2019 alone saw the rise of David Adjaye’s much-anticipated crimson Ruby City in San Antonio, joining permanent structures by two of the 20th and 21st century’s most important artist: Ellsworth Kelly and James Turrell. Now, after almost six years in development, Steven Holl Architects’ Nancy and Rich Kinder Building for the Museum of Fine Arts Houston is set to open its doors in late November.

The 17,050-square-metre Kinder Building is also in good company much closer to home. Holl’s complex joins a number of other structures on the Museum’s Susan and Fayez S. Sarofim campus: the Audrey Jones Beck Building by Rafael Moneo, completed in 2000, as well as Caroline Wiess Law Building (which boasts an addition by Ludwig Mies van der Rohe) and Isamu Noguchi’s nearby Lillie and Hugh Roy Cullen Sculpture Garden. As part of the self-described “largest cultural project in North America,” the Kinder Building is also the second Holl-designed structure on the 14-acre site, following the Glassell School of Art, which opened in 2018. 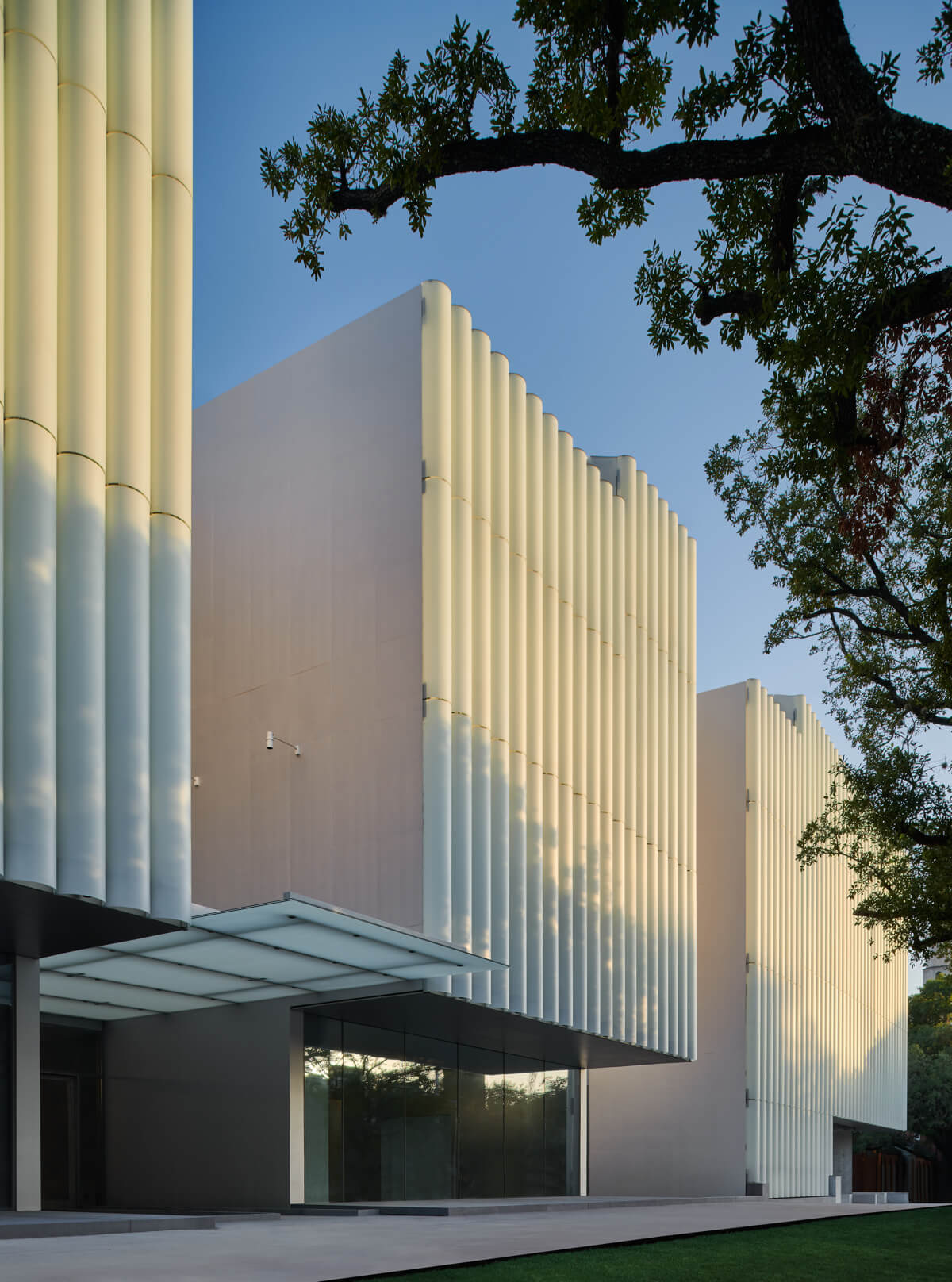 Clad in undulating vertical glass tubes, the torqued concrete volumes — described by the studio as “concave curves, imagined from cloud circles”— rise three storeys and contain expansive gallery spaces devoted to the institution’s collection of modern and contemporary art. Seven “porous gardens” are interspersed between the intersecting masses, set off by the semi-opaque facade during the day and illuminated by its soft glow at night.

Though both ethereal and evocative, the glass veil also attempts to solve a very practical problem of building in the American south: the glare of the sun. Comprising more than 1,000 elements (some at heights of over six metres), the acid-etched skin curtails the solar gain of the concrete structure. 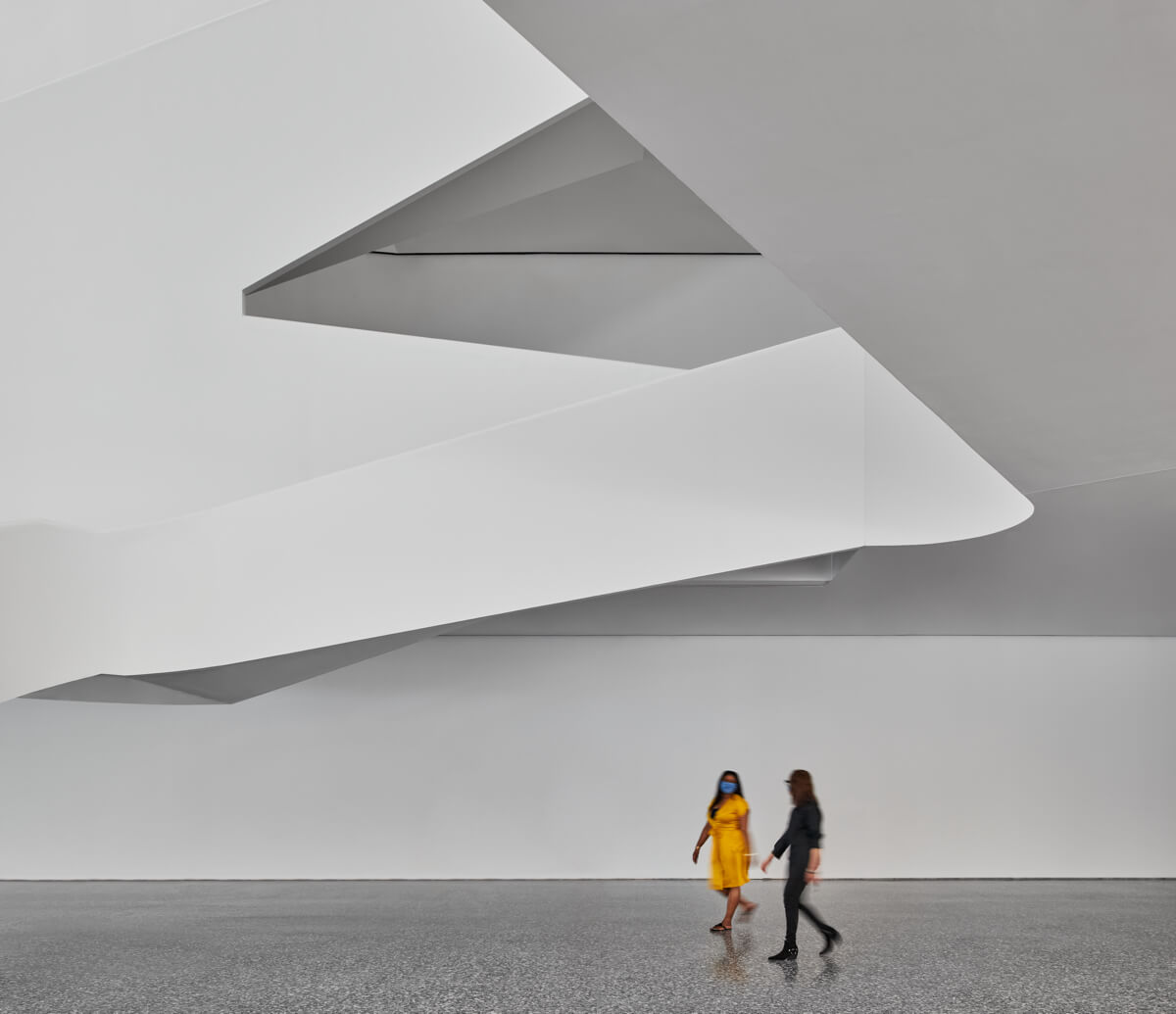 In addition to similarly buffering the site from the bright Texas sun, the garden voids also identify the museum’s entry points, which usher visitors into the swirling full-height atrium. 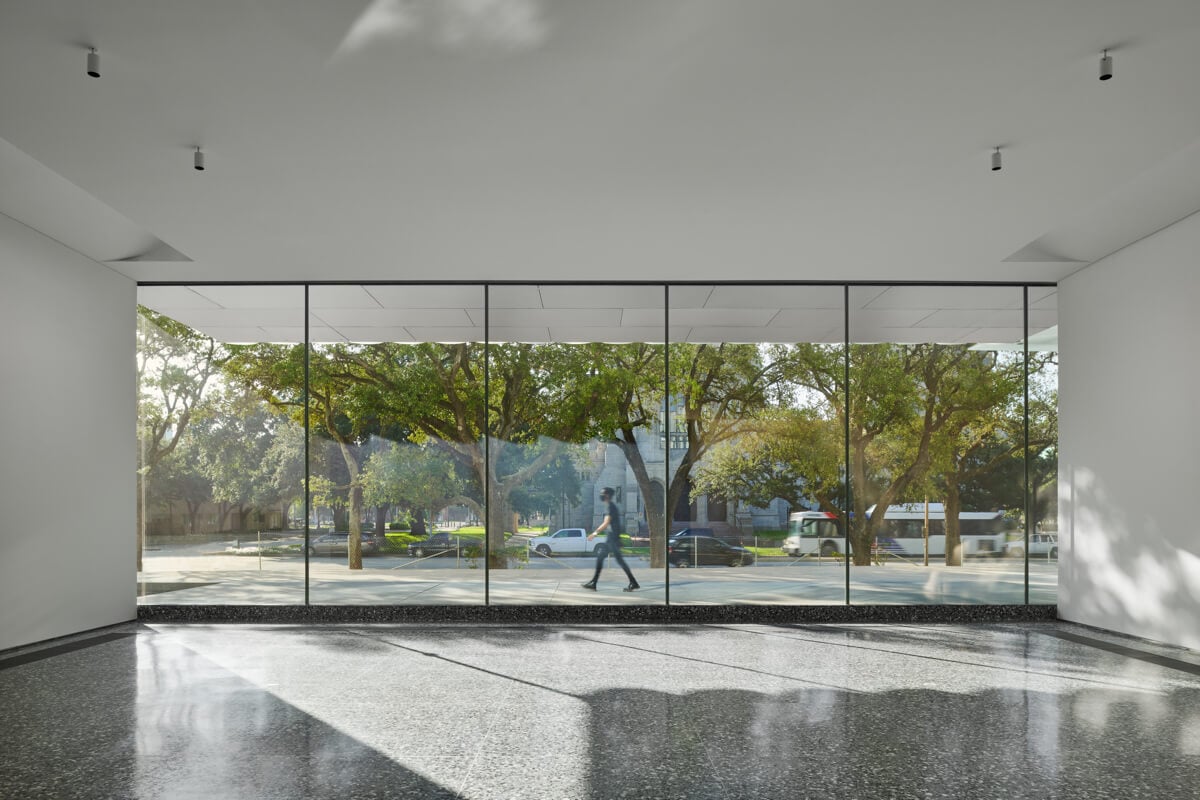 Seemingly the locus of the complex’s carved forms, a circuitous stairway leads up from the atrium, street-level galleries and black-box space to the exhibition halls above. The scalloped ceilings of these gallery spaces are a result of the firm’s strategy to top-light them by “pushing down on the roof geometry” and “allowing natural light to slip in with precise measure and quality,” according to senior partner Chris McVoy. The clerestory windows thus direct natural light into the second-floor spaces — highlighting the institution’s vast collection — and third-floor halls, which are designated for rotating thematic exhibitions.

“Light enters the Kinder building,” says principal Steven Holl, “through the ‘luminous canopy’ of its roof, modelled on the billowing clouds of the Texas sky, and light emerges from the cladding of soft-etched translucent glass tubes, whose glowing presence at night will add to the impact of the campus as a civic experience for all of Houston.” 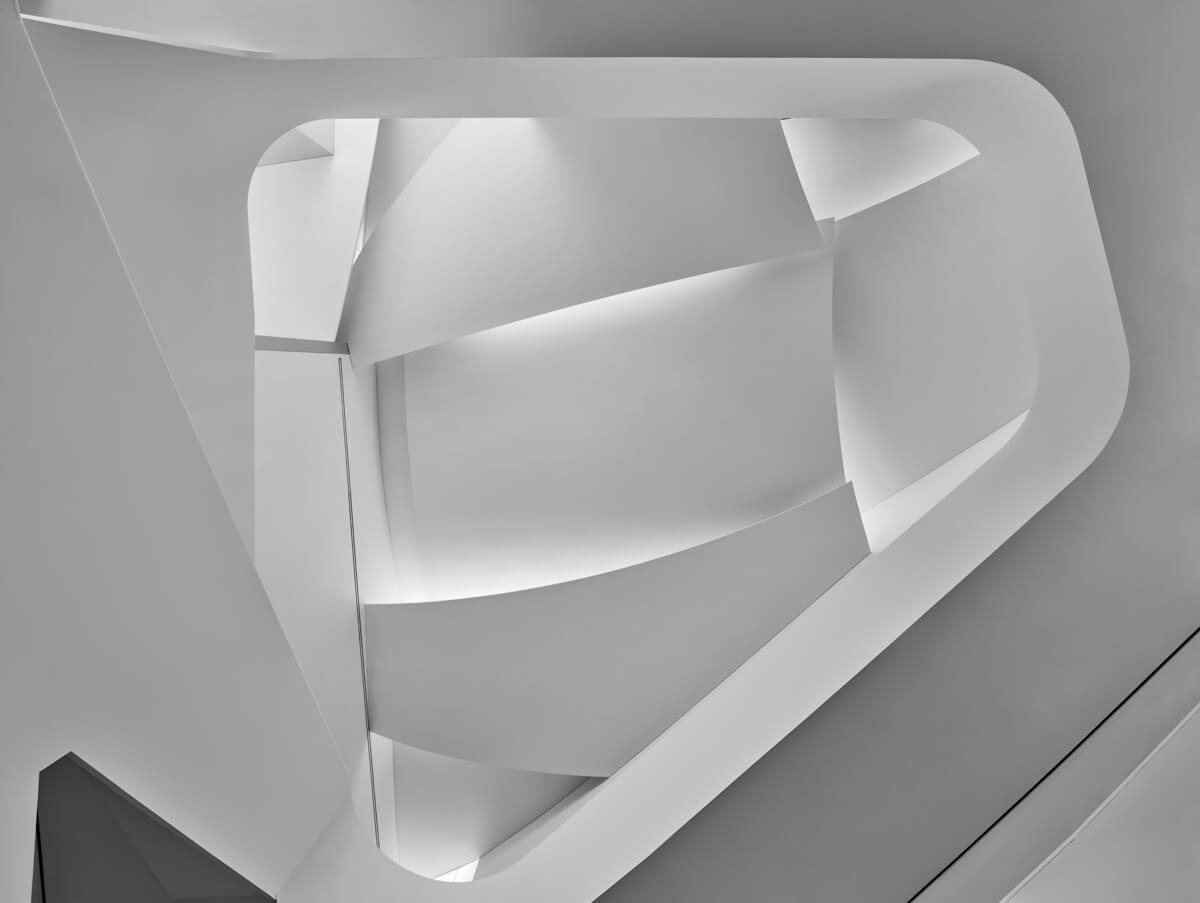 From Jasper Johns and Claus Oldenburg to Yayoi Kusama, Senga Nengudi and Kara Walker, the MFAH now has another equally impressive landmark to exhibit its significant archive of works by artistic luminaries of the 20th and 21st centuries. As museum director Gary Tinterow puts it: “In the dynamic spaces that Steven Holl Architects has designed for the Nancy and Rich Kinder Building, our distinctive holdings of modern and contemporary will soon have the showcase they deserve.”

Set to open in late November, the Nancy and Rich Kinder Building is the latest addition to the MFAH’s Susan and Fayez S. Sarofim campus.