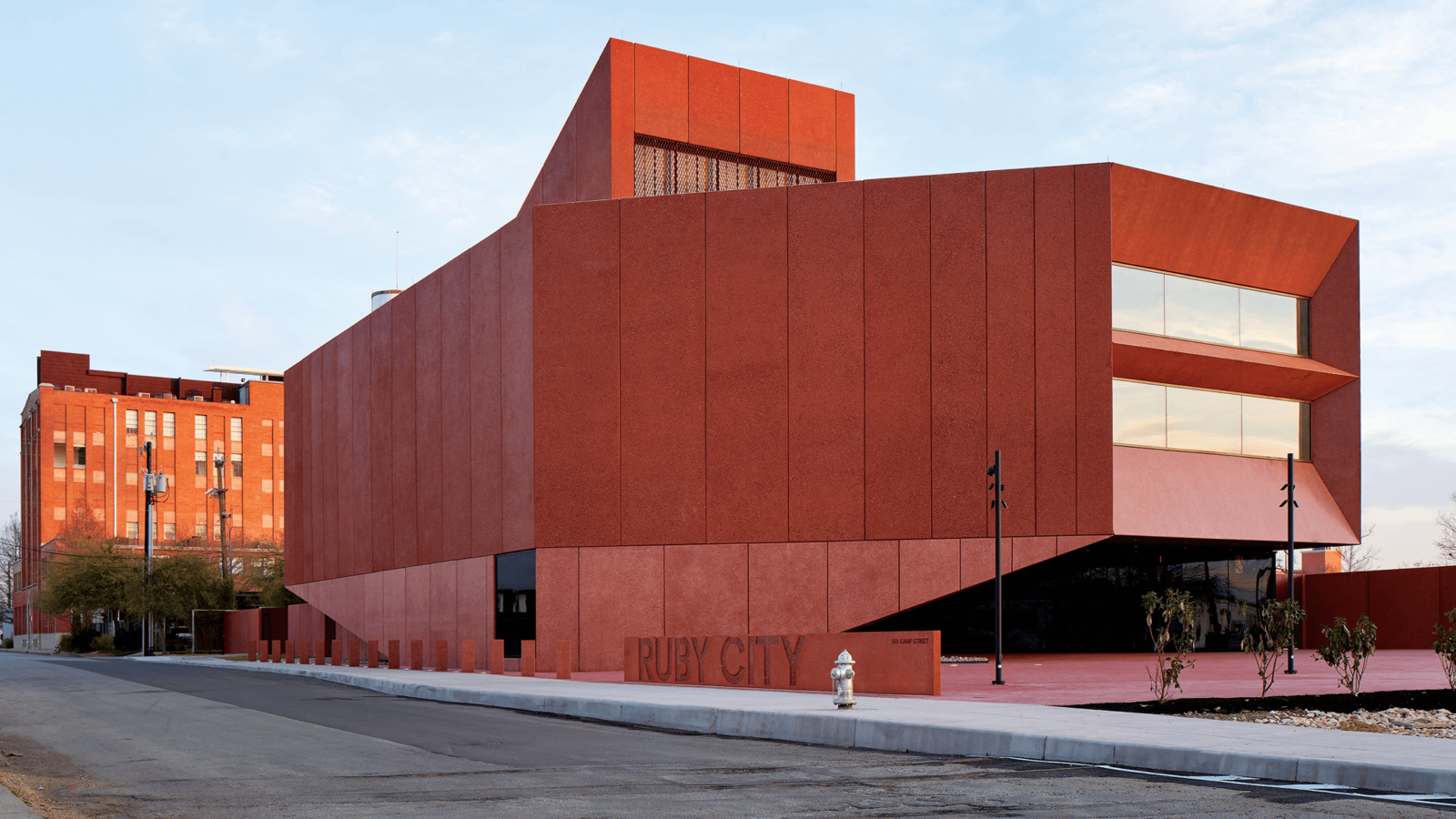 The Ruby City Museum, by David Adjaye, is a Texas Gem

A dozen years in the making, the San Antonio art museum is a vibrant reflection of its setting.

When you look at David Adjaye’s most recently completed American building, you see red. Ruby City, a contemporary art museum in San Antonio, Texas, has shimmering, earthy crimson facades; its vivid volumes stand out from both its dusty post-industrial block and from the ranks of contemporary high design.

And that’s fine by Adjaye. The Ghanaian–British architect sees Ruby City as having its own specific mission. “It is a place that really exists to inspire people,” he says. “And it seeks to make sense of where you are in the world — not in a literal sense, but through a sort of narrative.” In other words, through its own art.

Inside the museum, linear skylights in the angular roofline illuminate works by, from left, Josiah McElheny, Teresita Fernandez, Marina Abramovic and Do Ho Suh.

The 1,400-square-metre gallery, which unveiled its first public exhibition in October, showcases the collection of the artist, collector and philanthropist Linda Pace, including work by Isaac Julien, Do Ho Suh and Wangechi Mutu. The long, faceted design contains distinct galleries inspired by three typologies of artist studios: a tall barn, a loft with northerly light and a purpose-built box. “This connects back to the history of contemporary art-making,” Adjaye says, explaining that Pace wanted it to be “more than just a machine for the viewing of work.” She also hoped it would “speak to the specificity of this place.”

A native of San Antonio, Pace launched the Ruby City project before her death from cancer in 2007. She had met Adjaye during the last year of her life and decided that he was the right young architect to take this on. In the dozen years since, Adjaye has remained committed to the project even as his own career has blossomed, most notably with the completion of the Smithsonian National Museum of African American History and Culture in Washington, D.C.

Masterworks: David Adjaye and the National Museum of African American History and Culture
The completion of David Adjaye’s most ambitious project to date has the British architect poised to reach a new level of greatness.
Read More

The distinct crimson hue of Ruby City, located in San Antonio’s industrial outskirts, was inspired by the area’s iron-rich soil, local vernacular architecture and a drawing by founder Linda Pace.

Adjaye credits one defining idea of Ruby City’s architecture directly to Pace: its redness. She passed him a drawing of a building she’d seen in a dream, a cluster of towers in shades of pink, magenta and russet. “I was already thinking of making a chromatic building,” Adjaye says, “and her drawing gave me permission.” The crimson of the final building comes from precast concrete fabricated in Mexico. Studded with glass and mica aggregate in different shades, it has a distinctly mineral quality.

That’s no accident. The architect connects the colour with the iron-rich soil found in many parts of the American Southwest. “I was interested in understanding the earthbound architecture of the pre-colonial history,” he says, “and these forms in red-coloured earth that are connected to the groundscape.”

In his work over the past decade, Adjaye has pushed back against what he calls the “neo-minimalist taste” of the architecture world. In his view, vivid colour is just one aspect of architectural history that has been overlooked by the mainstream of Western modernism. “Some architects edit where they look in history and I think that’s deeply flawed,” he says. “You can’t understand Ludwig Mies van der Rohe without understanding neoclassicism. You can’t understand Luis Barragán without looking at vernacular African architecture. For me, they are seamless: one continuous sourcebook that provides guidance to shape our contemporary world.”

If all of architectural history is fair game, then Adjaye can go wherever his sensibility leads him. And in Texas, against a landscape of self-storage warehouses and fast-food restaurants, he has chosen his own path, making a building that is peculiar yet adaptable, well-crafted yet tough, open to a changing city. It’s architecture with the ambitions of fine art, rendered in full colour.

A dozen years in the making, the San Antonio art museum is a vibrant reflection of its setting.