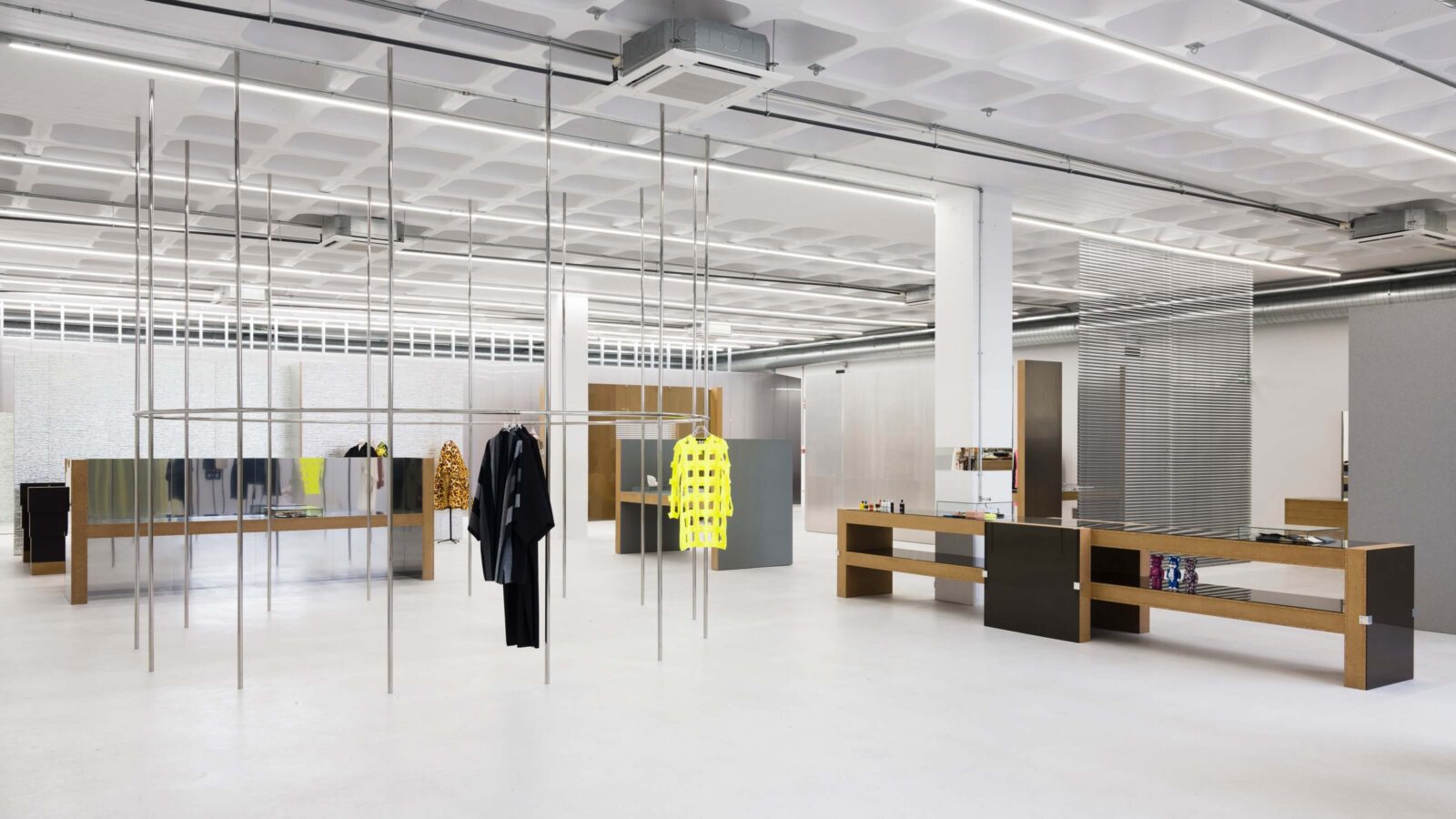 The first sign of artfulness – a flash of acid yellow plastic – can be spotted across the parking lot: It’s a curtain that marks the doorway to Tem-Plate, a high-end streetwear boutique designed by Gonzalez Haase AAS in Marvila, an industrial neighbourhood in Lisbon.

The curtain – the sort of heavy PVC often used at the entry of a commercial freezer – opens into a cavernous former warehouse, where the next thing you see is equally unexpected: a massive hunk of limestone from Portugal’s Algarve region, a prompt that invites you to reset your eyes and prepare to examine the goods.

According to Pierre Jorge Gonzalez, who co-runs his Berlin-based studio with Judith Haase, this is a central strategy of the duo’s retail and other designs. “In our work,” he explains from Germany, “we begin with the space itself, then look for opportunities to highlight its contents.” 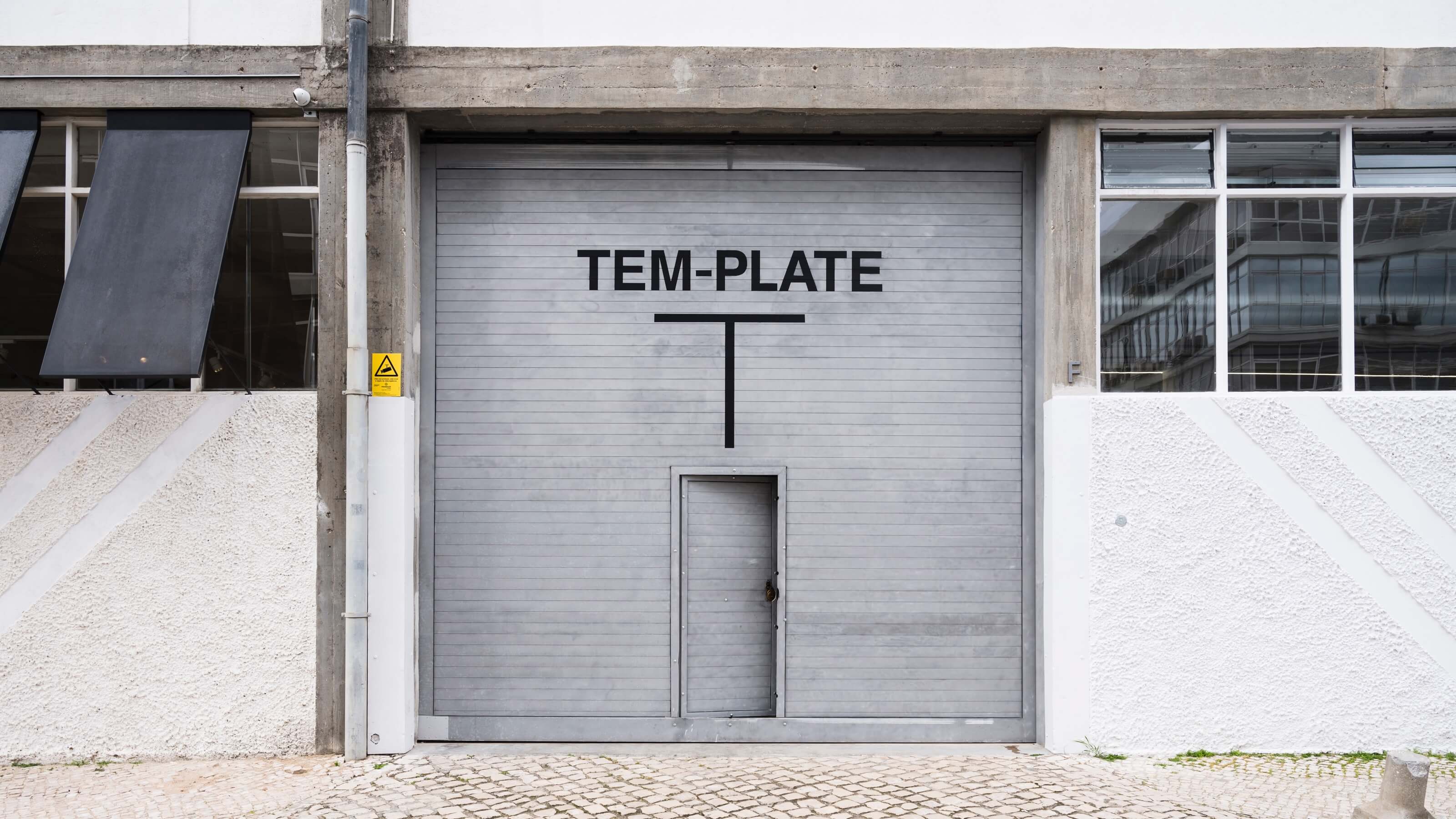 Trained in scenography as well as graphic design, Gonzalez has created sets for theatre, dance and film – a background that’s apparent at Tem-Plate. Here, the sprawling space is, like a stage, largely a blank slate: The walls and ceilings have been painted matte white, while the columns are glossy. The industrial concrete floor was sanded smooth, then whitened with pigment that gleams under cool strip lights.

An acid yellow PVC curtain acts as a beacon at the entrance.

This lighting is central to the project, the designer says, adding that it saturates each of the space’s 800 square metres to give the whole store a consistent glow. It’s an unorthodox approach for displaying items of value. “In a museum, you imagine a dark room with objects almost floating against the background,” says Gonzalez. “Here we reverse that: There is a quantity of light that forms a sort of abstraction behind the objects.”

In this case, the objects include the display designs, also conceived by Gonzalez Haase. A chunky chipboard shelving unit, for instance, is bookended and fronted with contrasting dark grey cladding, while the edges of the shelves remain unclad, highlighting their modest base material.

Chipboard also makes up dividing walls throughout the store, their brushed metal or crinkled stainless-steel surfacing providing the same kind of high–low balance characteristic of the freestanding units (not to mention a good conceptual match for the Yohji Yamamoto hoodies on offer).

Elsewhere a graphic grey plastic partition screen turns out to be an ordinary set of venetian blinds.

A circular steel display rack stretches from floor to ceiling. Strip lights affixed to the waffle ceiling imbue the whole space with a glow.

The shop also has a cutting-edge office area at the rear.

Such creative use of stuff from the hardware store recalls not only the Arte Povera movement of the 1960s and 1970s, but also the architecture of OMA, especially the Prada showroom that Rem Koolhaas completed in New York City’s Soho district in 2001. But where with OMA “you can always read that the work is actually very expensive,” says Gonzalez, “we aim to be as economical as possible.”

Maybe so, but unorthodox design is being employed here, as it was at the Prada shop, for the purpose of brand definition. Unsurprisingly, Tem-Plate owners Robby Vekemans and Rune Park have been resolutely focused on their e-tail business; the lines they carry, such as Comme des Garçons and Y-3, reach an audience far beyond Lisbon. And yet the shop is equally important to them, promising a certain hospitality unavailable online. 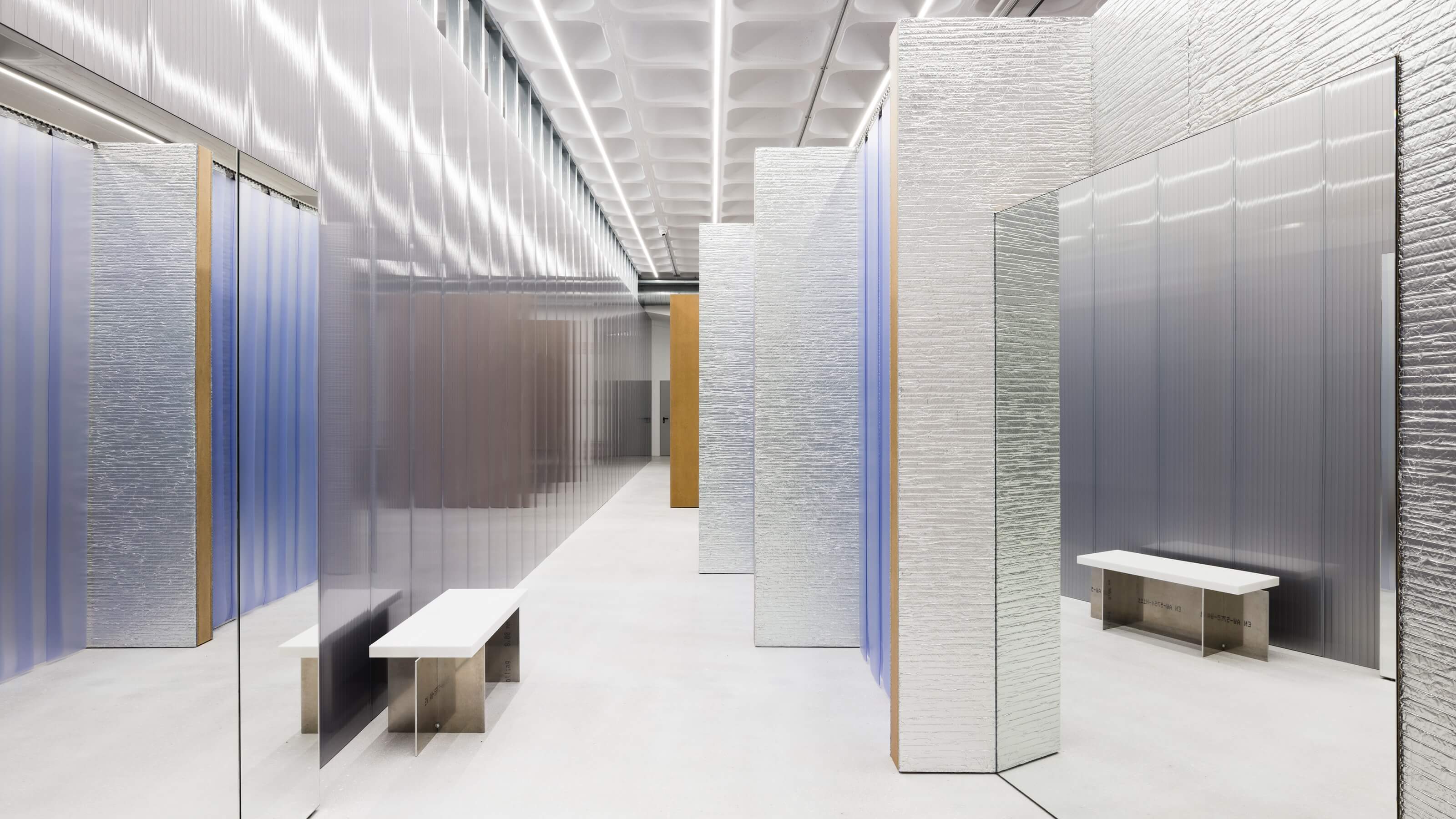 At the rear of the shop, the changing rooms keep the material makeup consistent: textured metal walls face off against polycarbonate ones.

Toward the rear of the store, for example, a cluster of furniture – including chunky but comfortable Roly-Poly chairs by Faye Toogood and some custom stools whose bases are printed with the production lot numbers of their stainless-steel components – has been gathered near a bar. It is here that a staffer will offer you an espresso or a Portuguese soda before sending you out through that acid yellow curtain and back into the world, perhaps with some merchandise in hand and almost certainly with a memory.