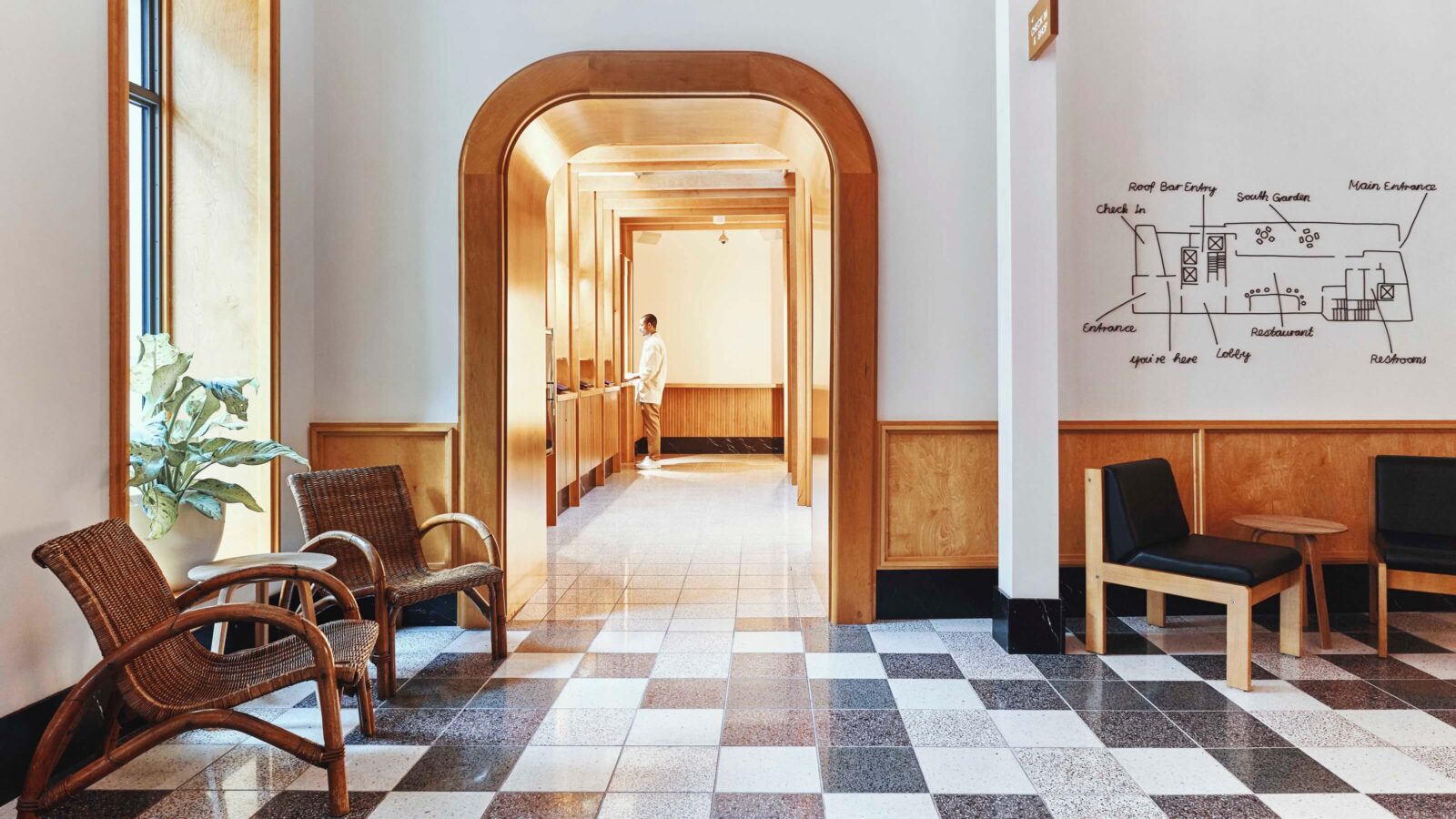 For the past two decades, the hotel brand that defined hipster chic has had a proven formula for success. But it isn’t resting on its laurels: The group’s creative team is still taking calculated risks, as two recently launched spinoffs and a pair of new builds – including Ace Toronto – prove.

If satire is a form of adulation, the Ace Hotel brand reached pop-icon status around 2011, when the sketch-comedy TV series Portlandia aired a skit featuring the thinly disguised Deuce Hotel. (“Each room comes with a turntable – it’s complimentary.”) By that point, what had started in Seattle in 1999 as a creative hangout for the late Alex Calderwood, his partners Wade Weigel and Doug Herrick and their musician friends had evolved into an “art hotel” concept that went on to become much imitated by other hospitality upstarts. By 2020, Ace Hotel will boast a presence in 11 cities in the U.S., Canada, Europe and Asia. But rather than rest on its laurels, Ace is once again shaking things up by launching a number of offshoots with decidedly different vibes and aesthetics.

“After 20 years of building Ace Hotel, we wanted to push the needle by considering new models of compassionate hospitality in cities we were already in and loved,” explains Kelly Sawdon, chief brand officer and partner at Ace Hotel Group and its in-house creative agency, Atelier Ace. With the launch of two new properties, Sister City on Manhattan’s Lower East Side and Maison de la Luz in New Orleans, the chain is diversifying in order to reach different demographics in the era of Airbnb and other disruptive actors.

That doesn’t necessarily mean that the Ace team is fazed by them. “We don’t look to the industry to inform our choices – our core team is composed of non-industry creatives – but approach each new project through a fresh lens,” says Sawdon. “We design the worlds we want to live in and hope it strikes a chord with others.”

What do these new worlds look like? Sister City, which opened this past spring, is a mellower version of Ace hotels, which are programmed to the nth degree with art and music happenings. By contrast, Sister City’s more intimate lobby, minimally decorated walls and self-service check-in kiosks offer a reprieve from the hustle of the big city. Maison de la Luz, meanwhile, ventures into luxury territory, with ornate flourishes woven into the interior design, its look explicitly tailored to its Big Easy setting.

At the same time, the marquee Ace Hotel brand is also evolving. While many of its previous iterations were retrofits – of a century-old former YMCA site in Pittsburgh or the 1920s-era United Artists Building in downtown L.A., for instance – the latest ones are being designed de novo. Opened in 2017, Ace Hotel Chicago was the first of the brand’s properties to be built from scratch; it’ll soon be joined by Ace Hotel Toronto (designed by Shim-Sutcliffe Architects) and Ace Hotel Kyoto (by Commune Design and Kengo Kuma).

How each of these ventures look and perform holds significance not only for Ace as a brand but for hospitality in general.

Knit into the Bowery district of Manhattan, Sister City occupies a former Salvation Army building that started life as a tenement. You enter through a skinny patio adjacent the main restaurant – sepia-toned Floret, with its terrazzo flooring, birch millwork and vintage chairs – or through Freeman Alley, where an art deco–inspired gate ushers you through a secret garden and into the lobby. 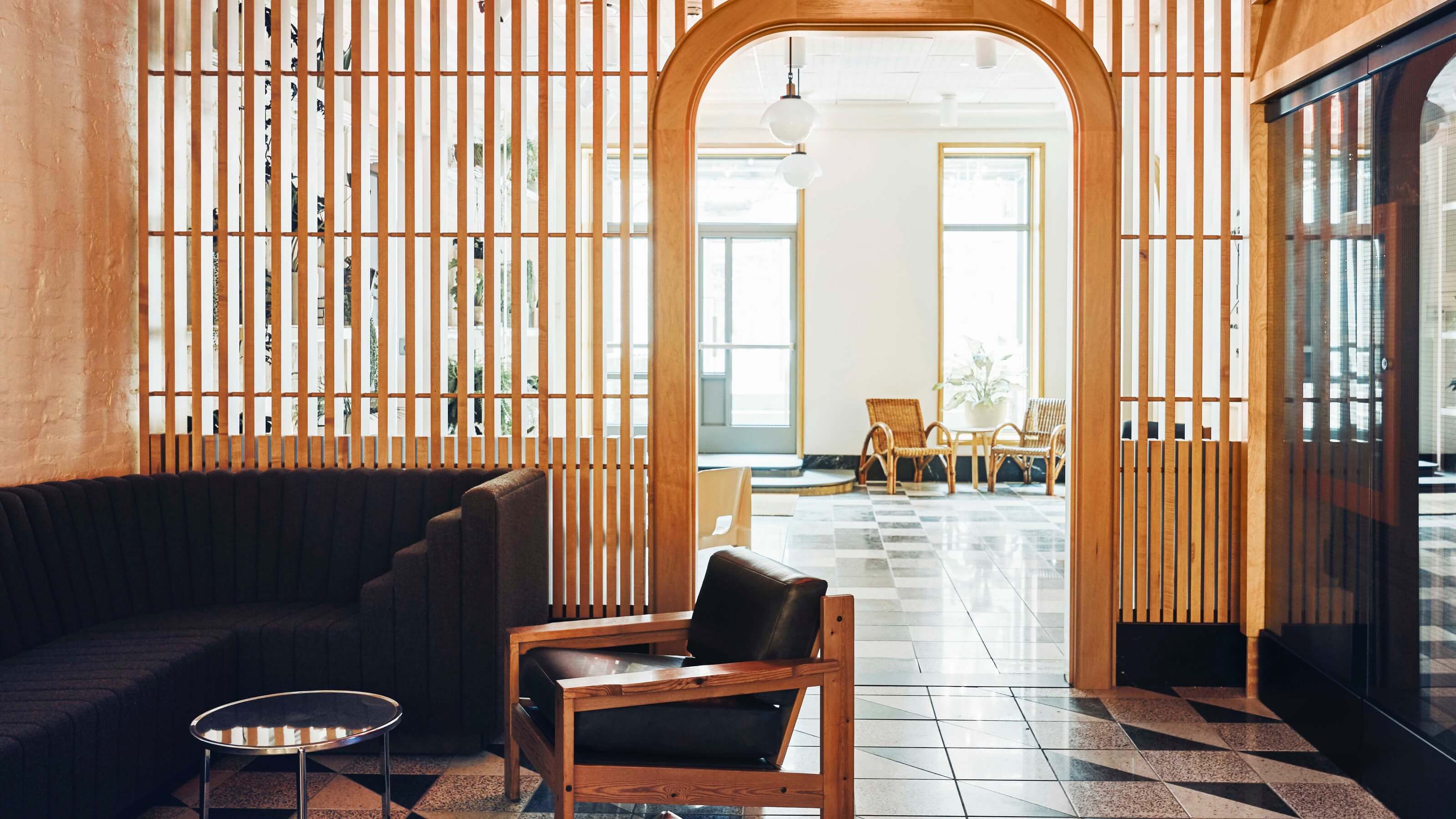 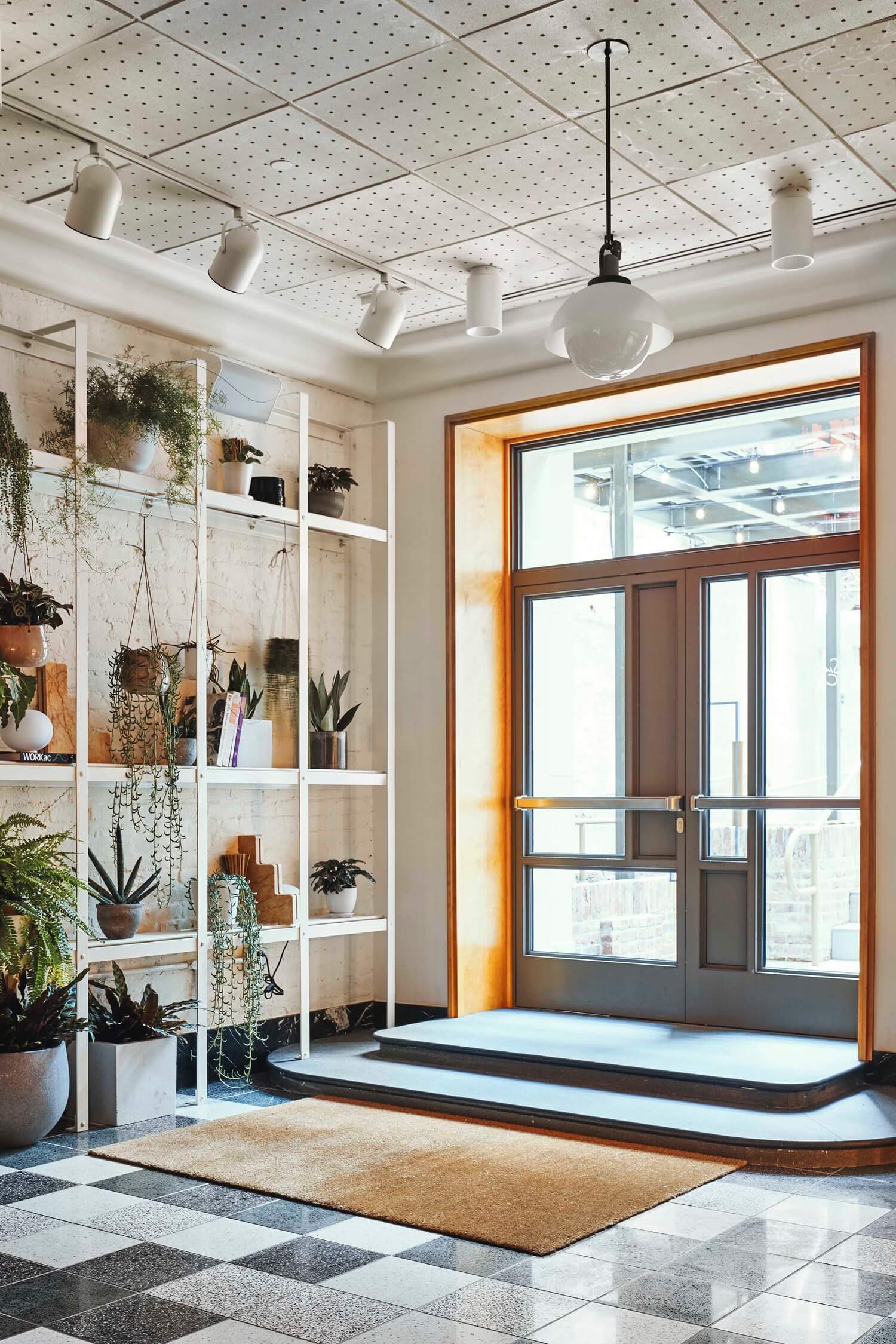 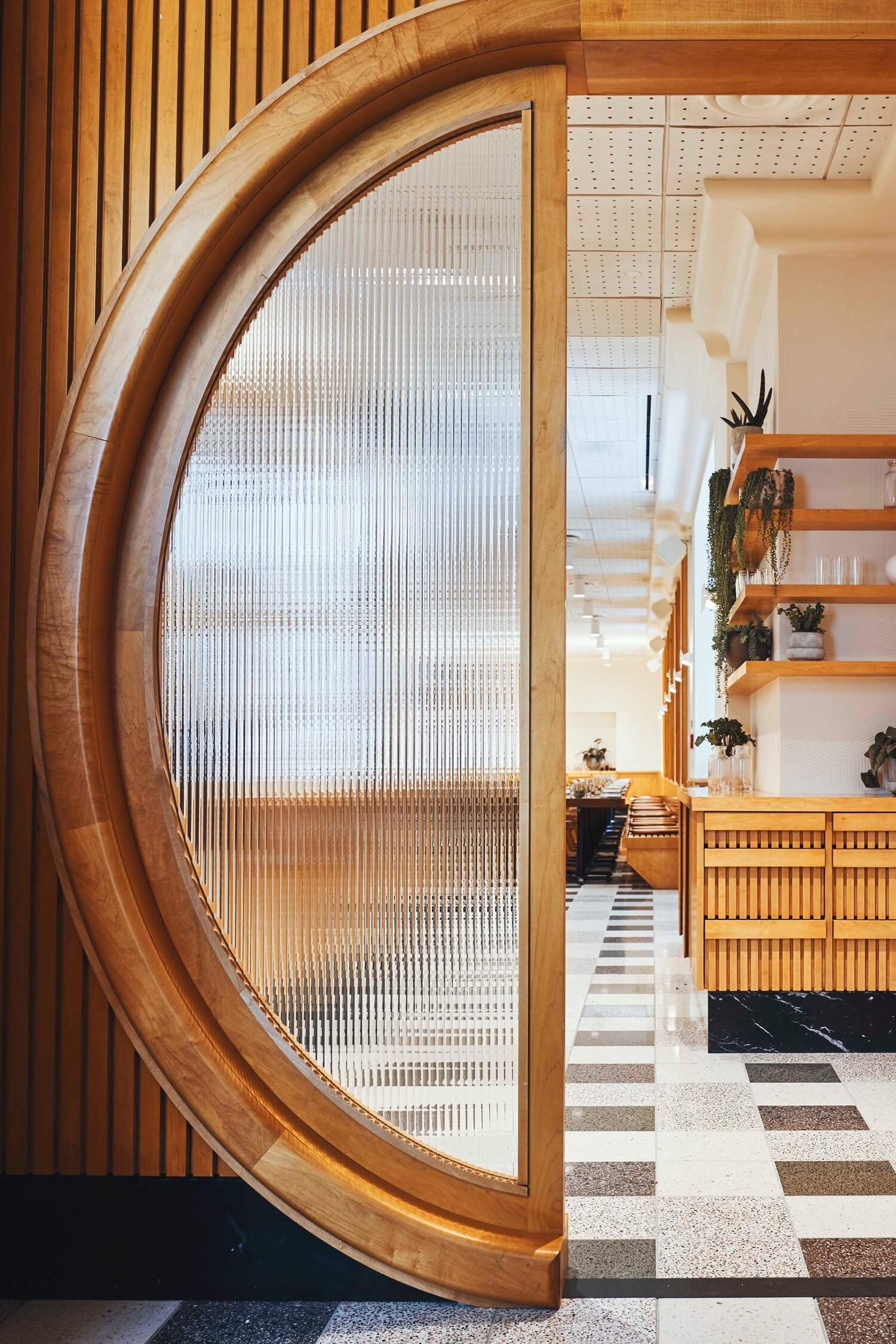 A glimpse into Restaurant Floret, helmed by chefs Joe Ogrodnek and Andrew Whitcomb. 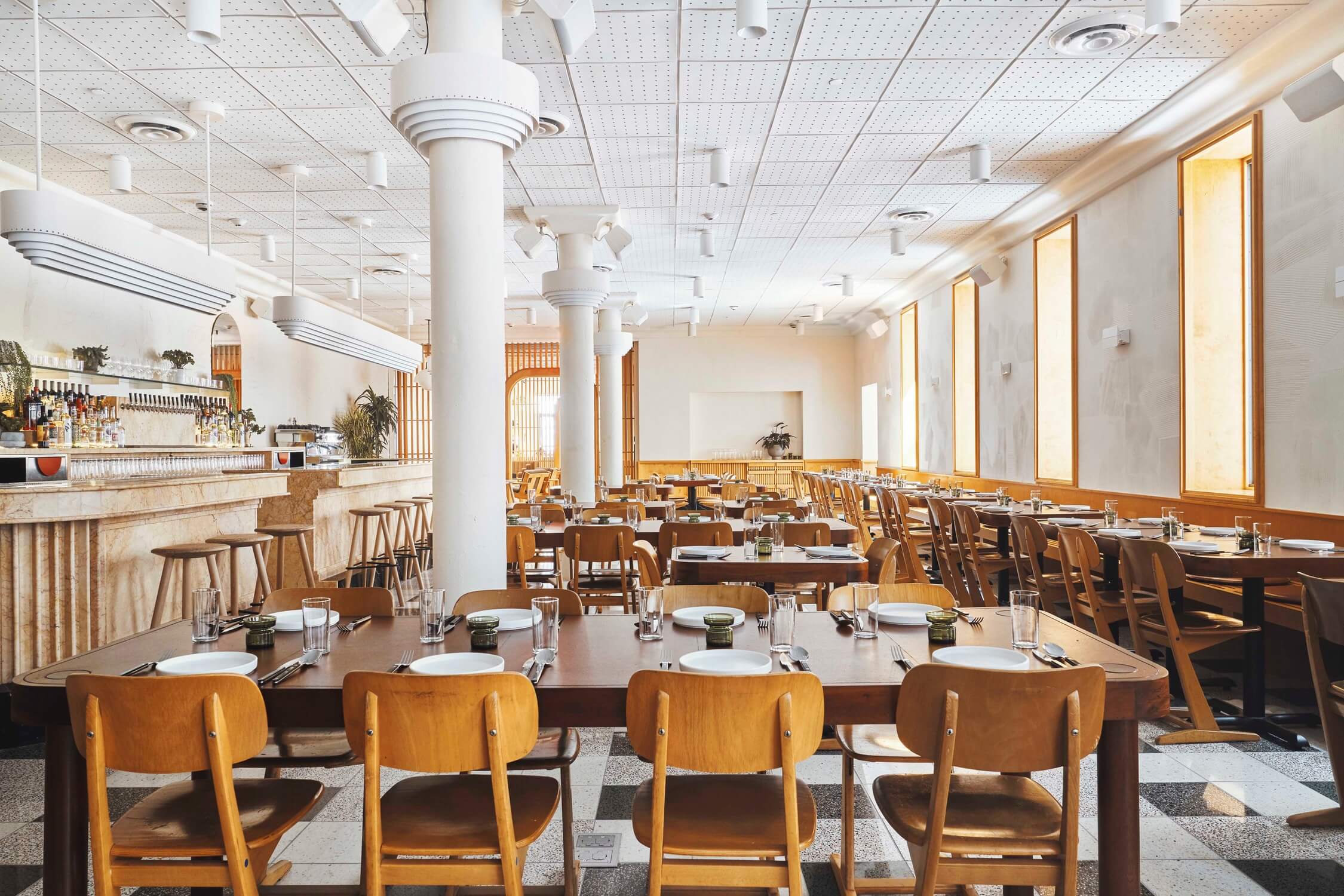 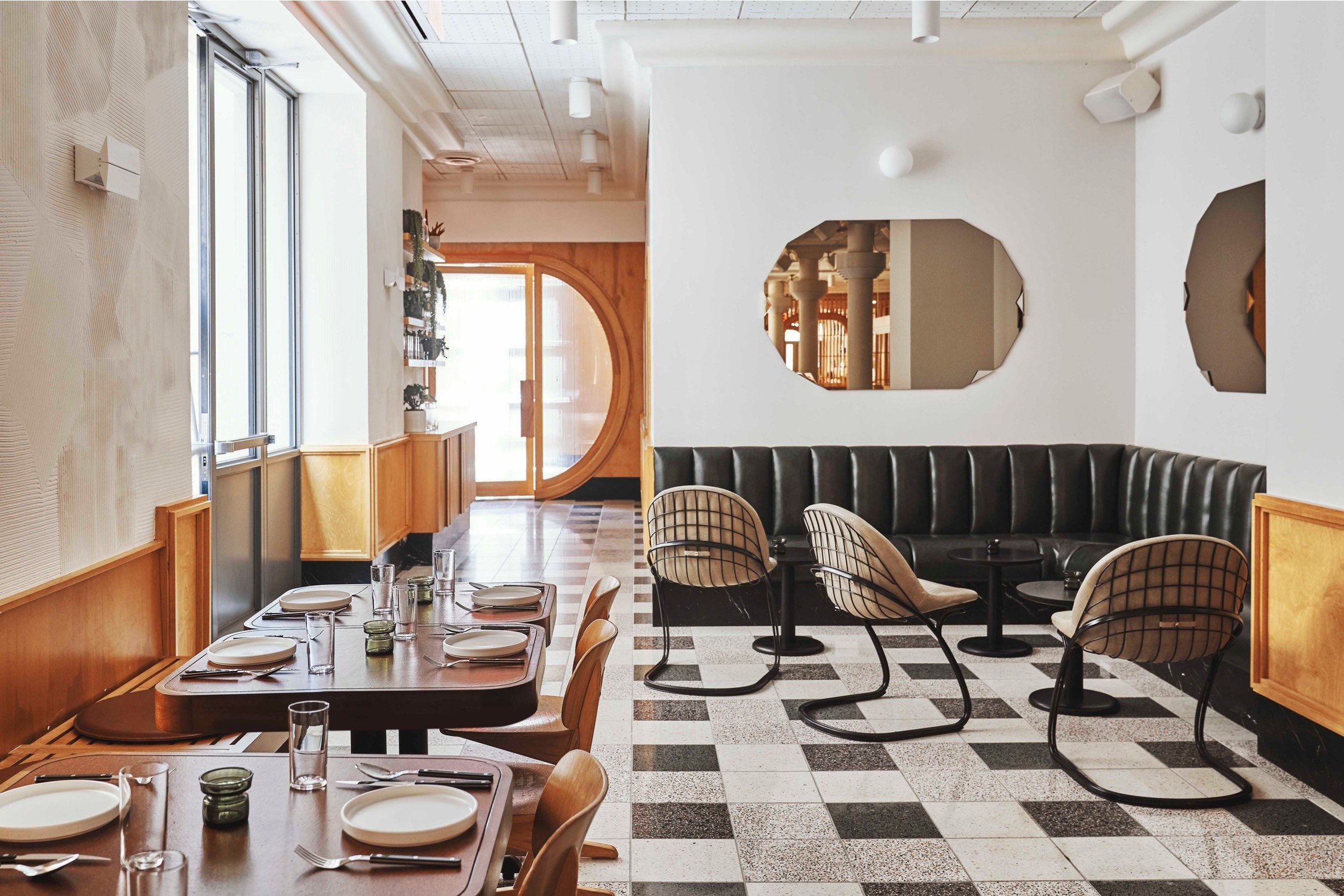 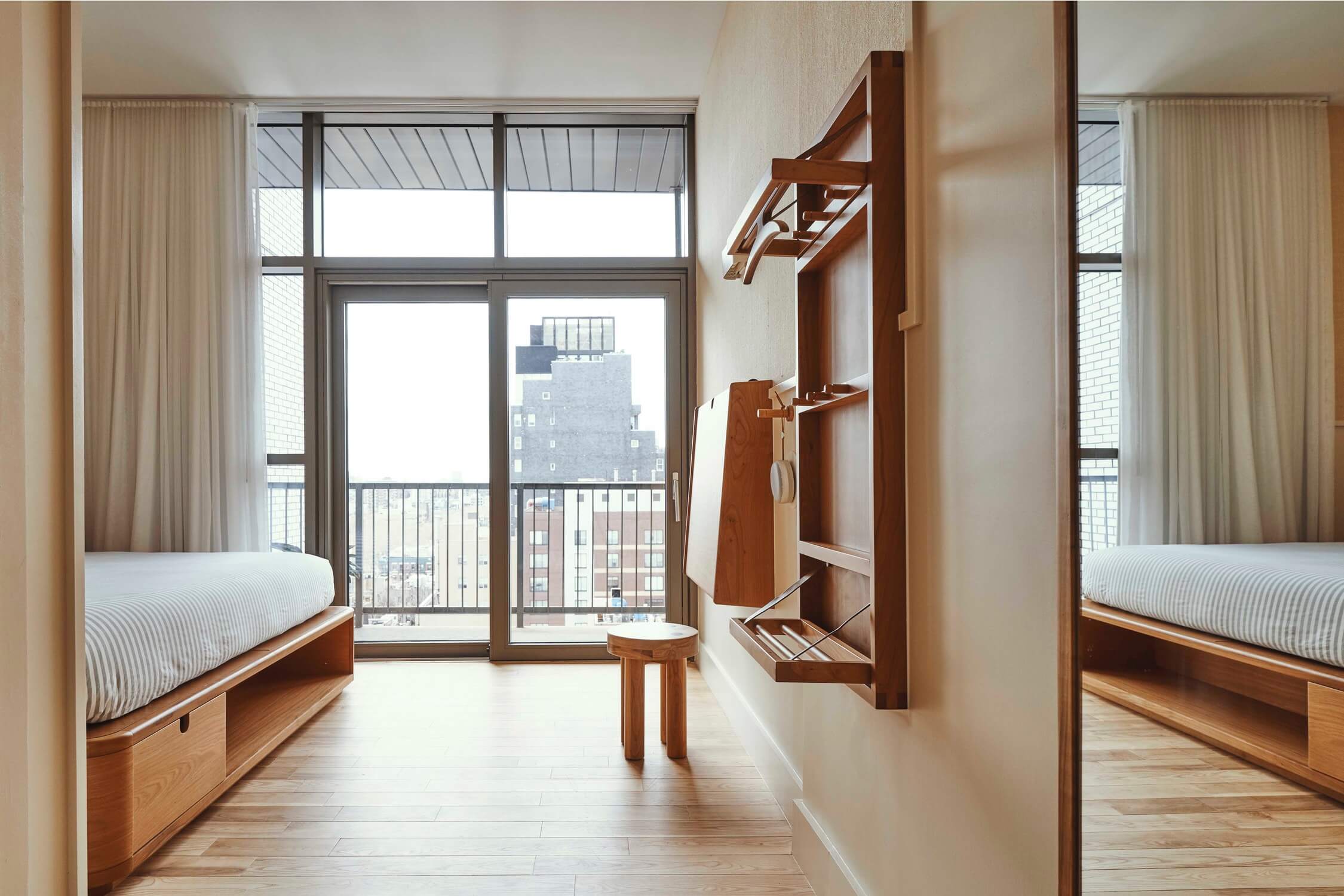 In the suites, the custom-crafted cherrywood beds and valets are space-saving by design. 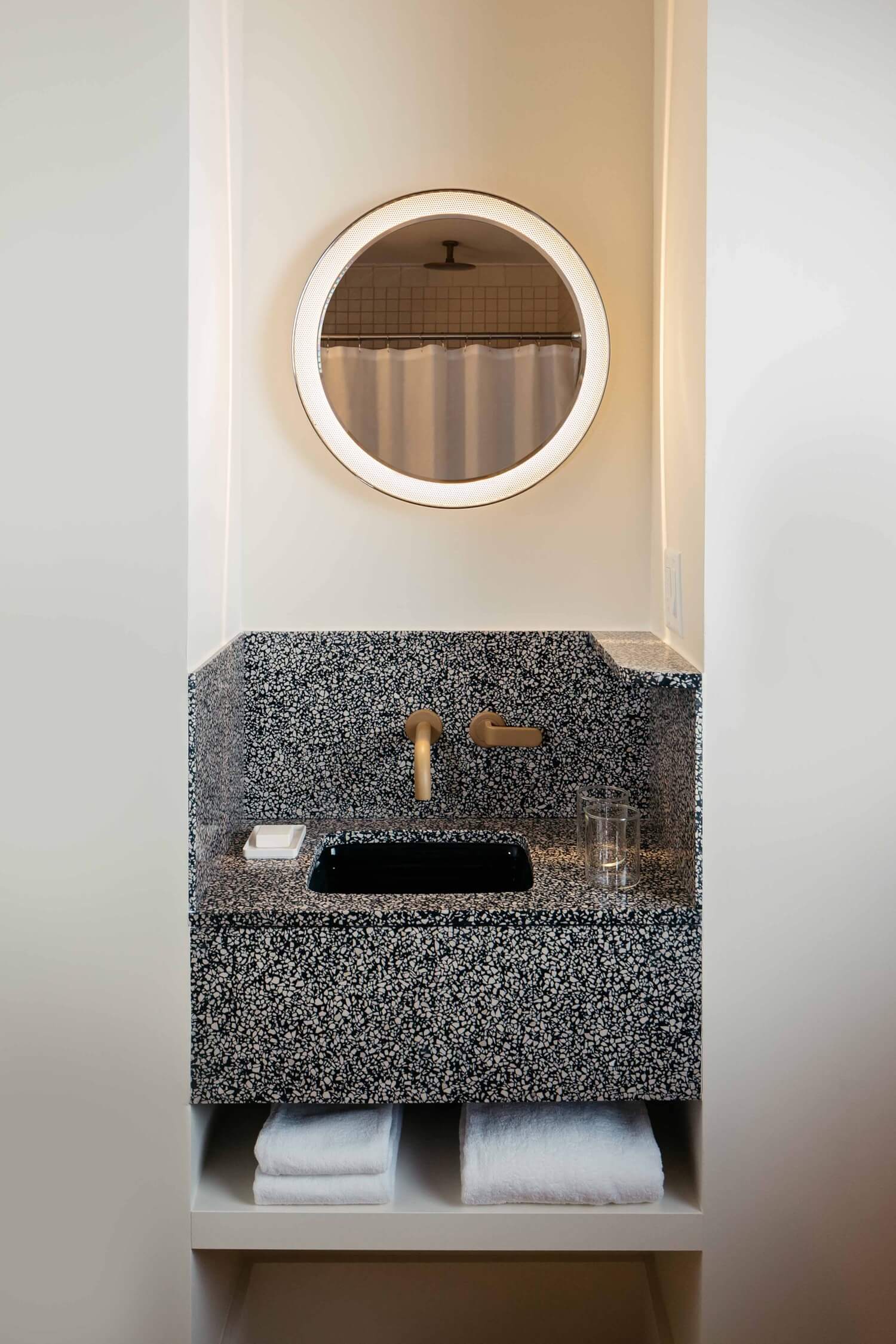 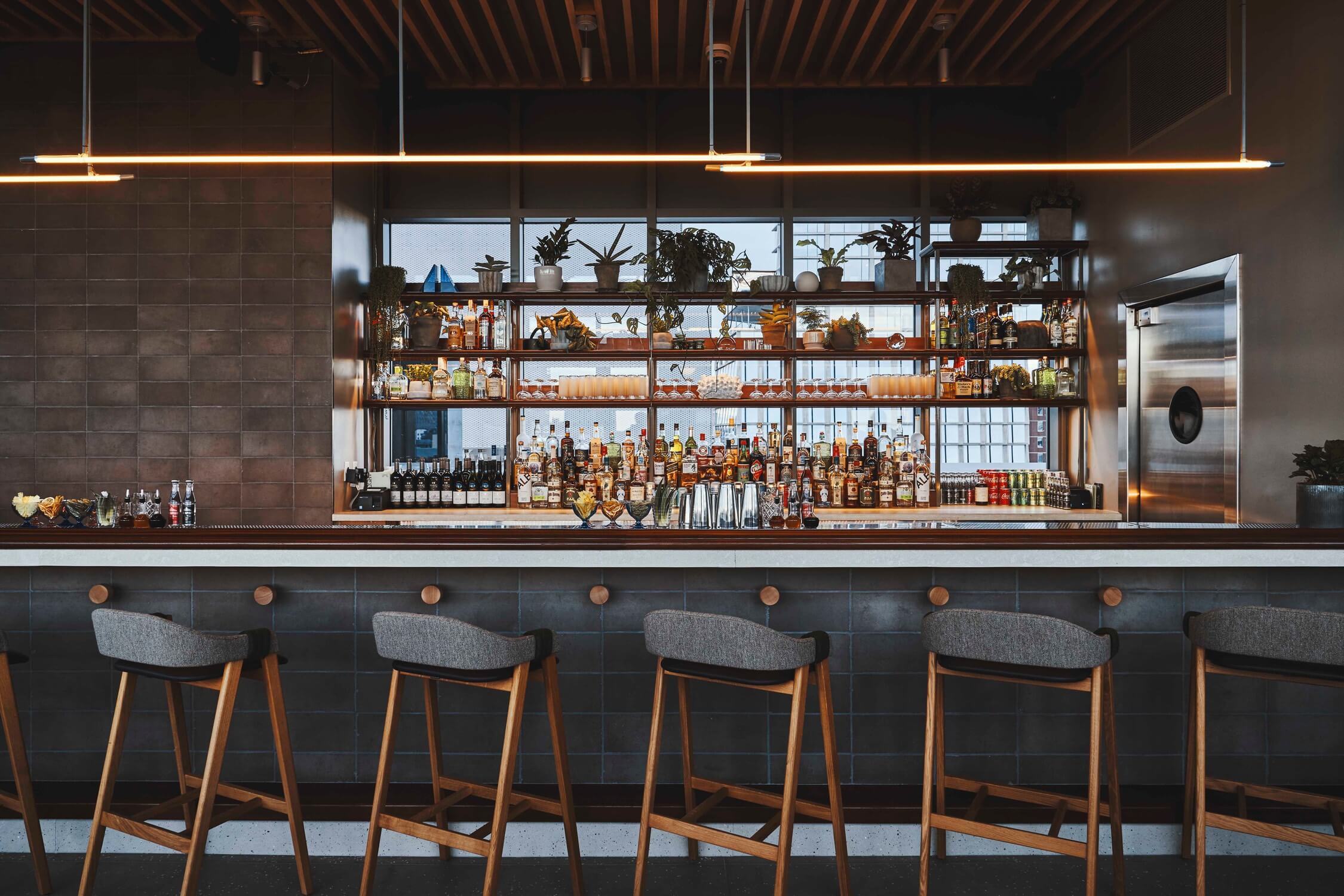 Last Light, the rooftop bar, offers dramatic views of the city through a generous window behind the liquor shelves. 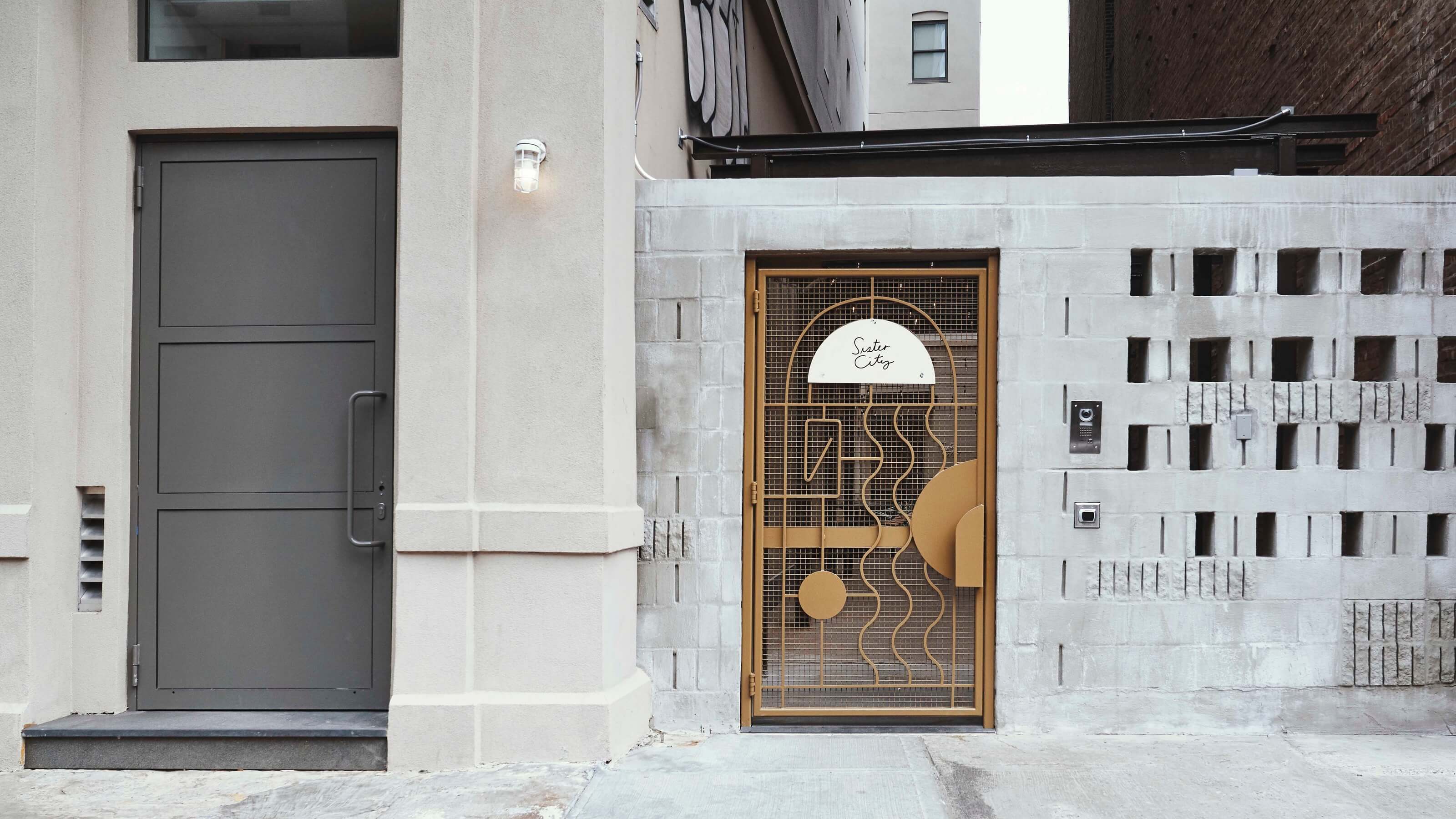 One way in to and out of the hotel is through a decorative metal gate off Freeman Alley in the Bowery. 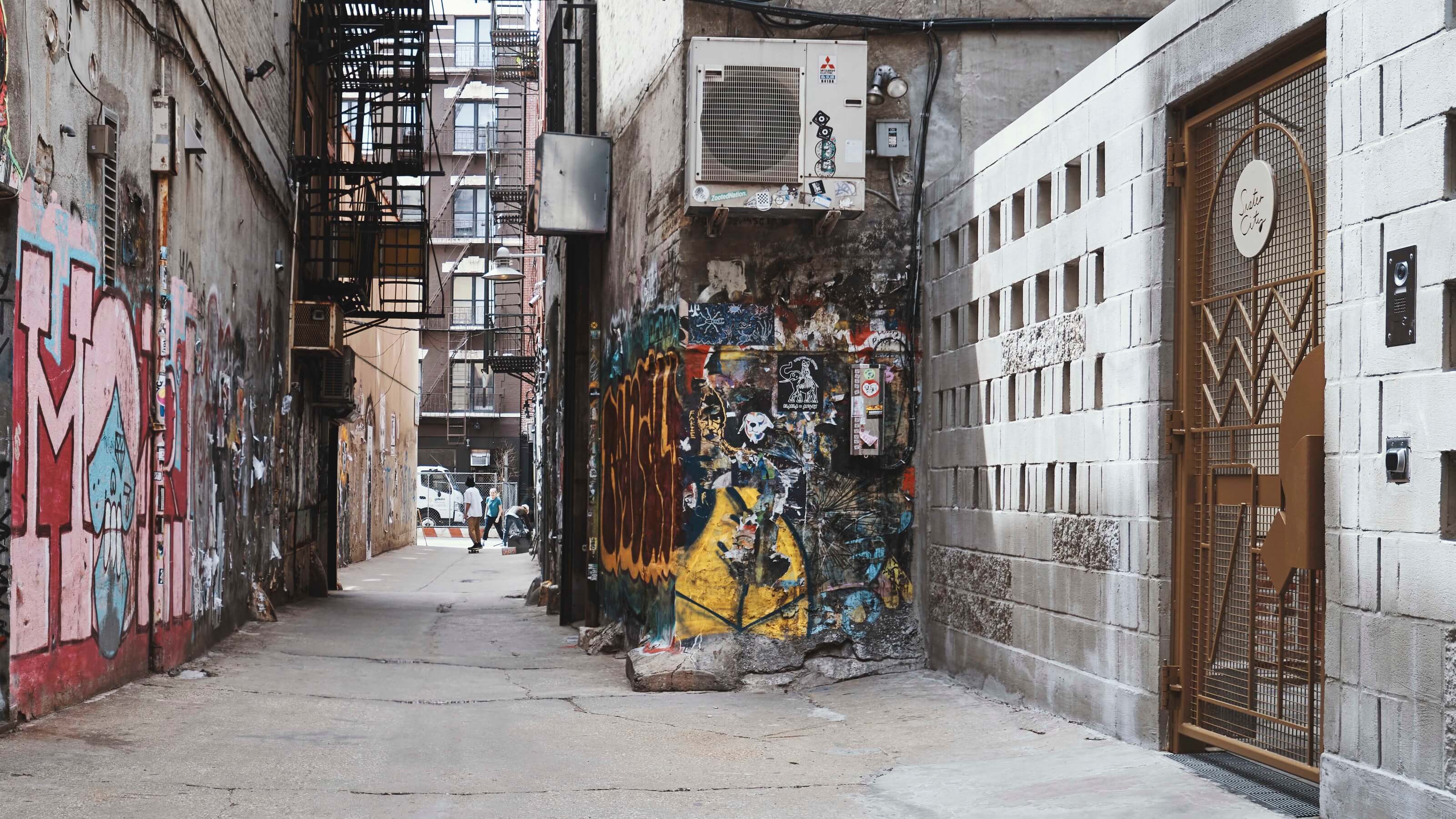 The hotel has a techno-minimal vibe, offering guests the Headspace meditation app as well as an original AI-enabled “lobby score” by electronic musician Julianna Barwick. Every last inch of the interior design, from the wood-framed arches to the marble flooring, feels handcrafted, however. Taking inspiration from such disparate sources as Finnish saunas and Japanese bento boxes, the 200 hotel rooms feature ingeniously compact furnishings, including custom terrazzo vanities and Italian cherrywood fold-down valets and beds with built-in storage.

Sister City emanates a techno-minimal vibe, yet every last inch of the interior design, from the wood-framed arches to the marble flooring, feels handcrafted

“Sister City lives at the intersection of simplicity and beauty, stripping away excess to provide a grounding environment in one of the most densely populated cities in the world,” says Sawdon. “It’s a mindful and thoughtfully designed oasis to help you recharge and orient yourself in the wider world.”

Located across from Ace Hotel New Orleans, the 67-room Maison de la Luz sits in the Big Easy’s former City Hall Annex. “We were able to layer upon the classic bones of the building, breathing new life into it,” Sawdon explains. Those bones include the stunning original stair- case, to which the designers added “a dusting of gold.” In this case, the design team comprised Atelier Ace and Studio Shamshiri. But the project also invited contributions from local artisans – and it’s this collaboration that gives Maison de la Luz its eclectic, voluptuous aesthetic. 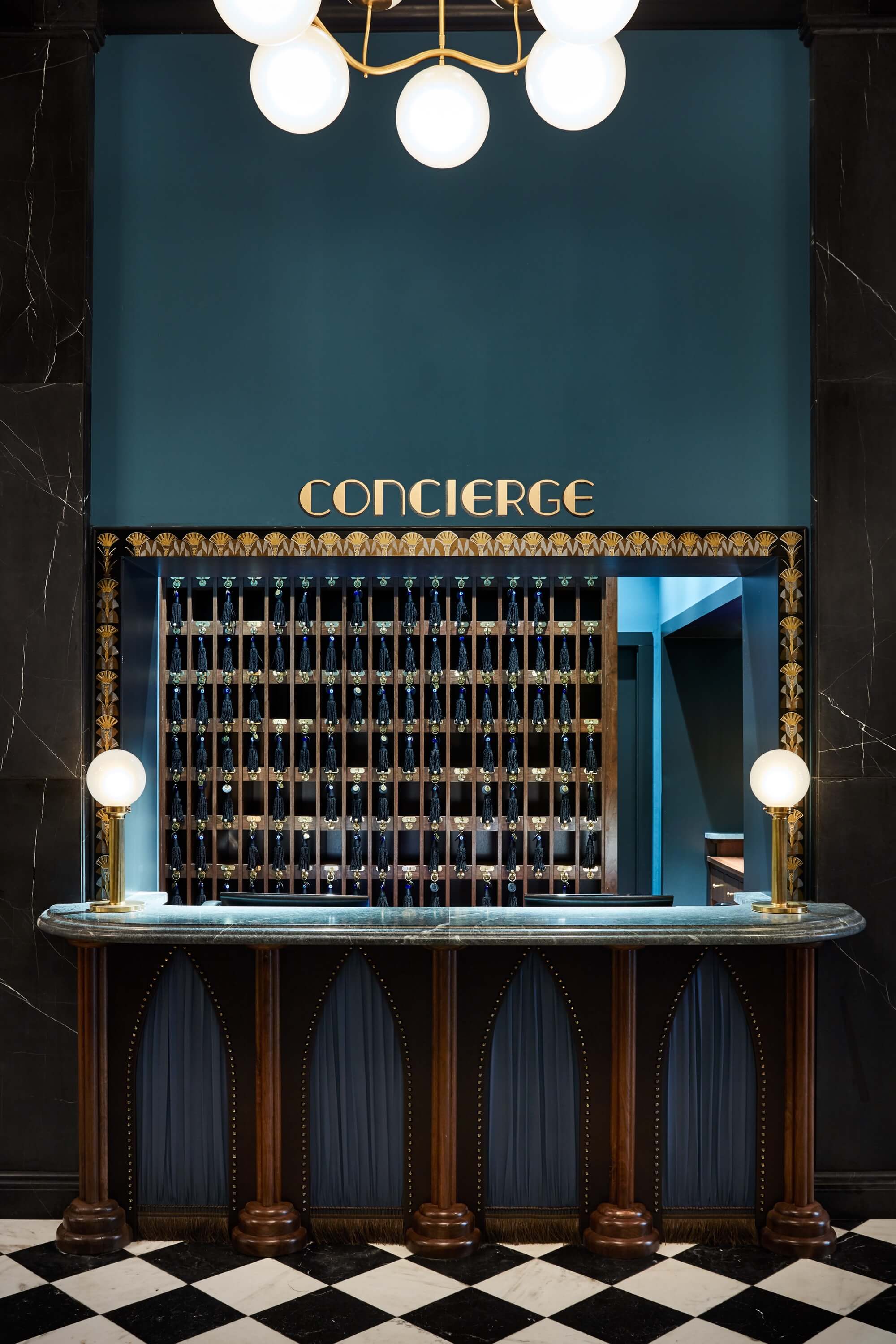 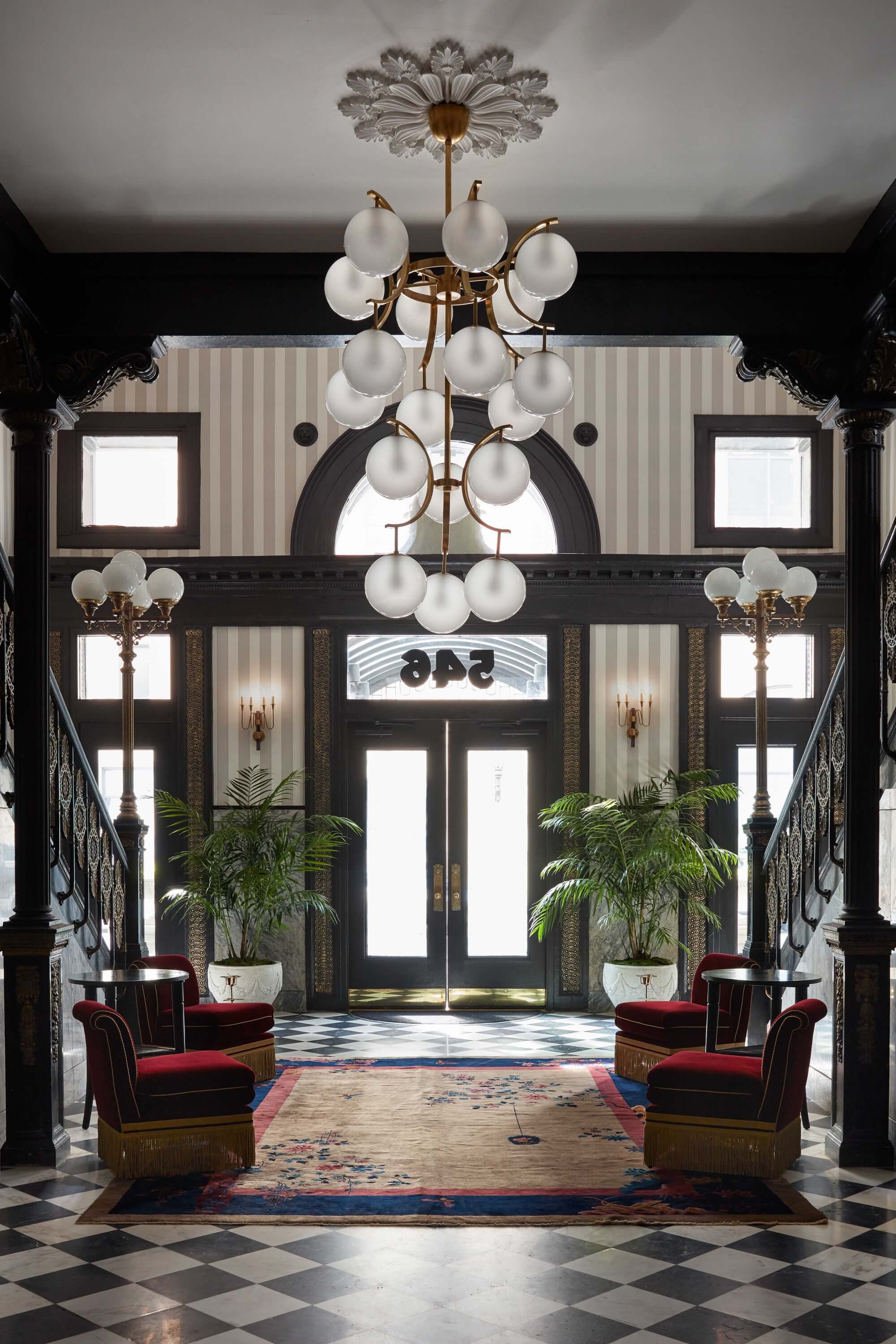 A light dusting of gold was all the interior design called for when it came to the original staircases.

“Every element is our homage to New Orleans,” Sawdon says. “We wanted to revel in and relish the richness of the city’s past, present and future.” The artists played up motifs once found in traditional Southern guest houses, such as the serpents that show up in the custom rugs by Christopher Farr and the native bayou flora depicted in the Breakfast Room’s massive wallcoverings. 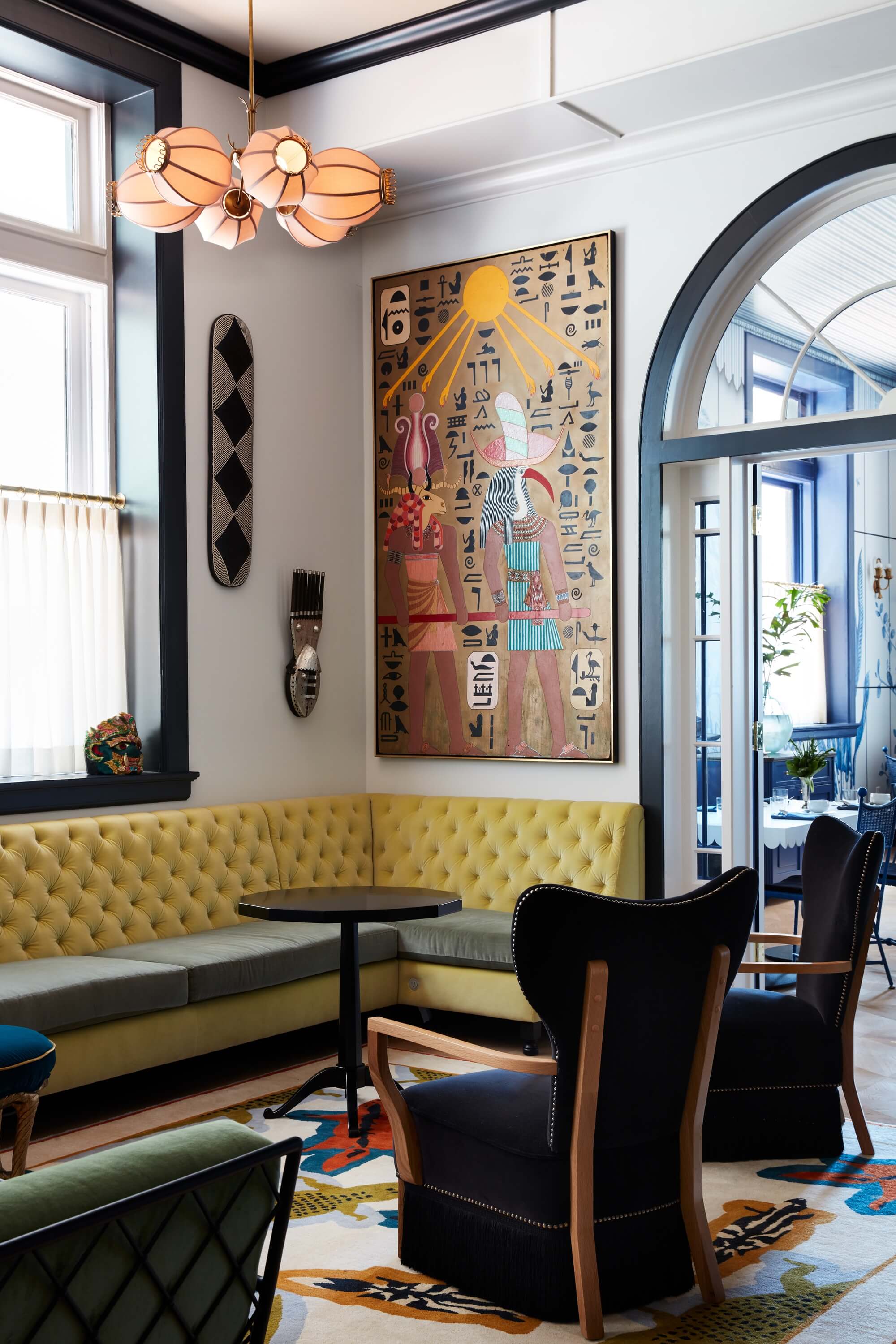 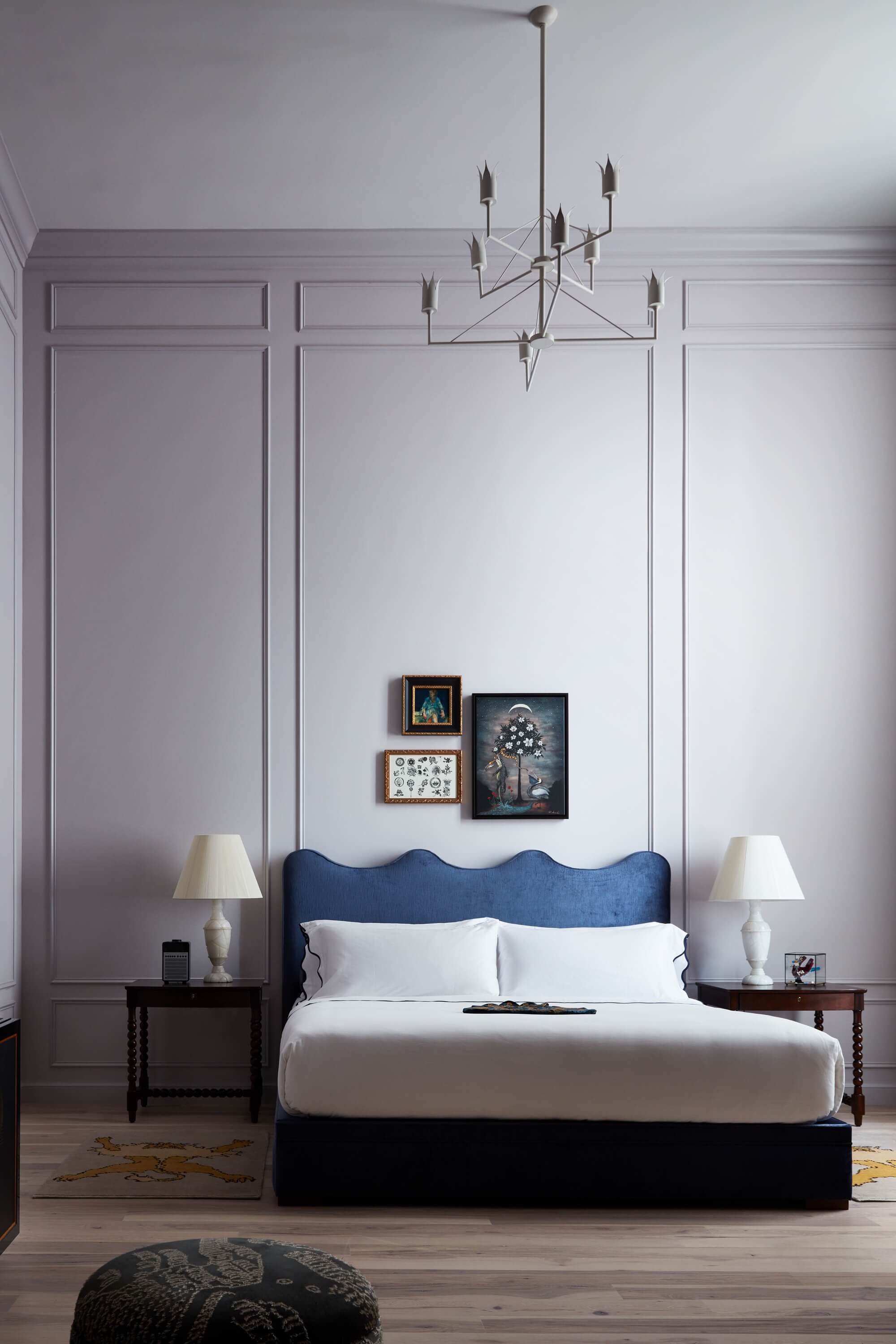 Suites feature hand-embroidered linens, a custom crest on the beds and paintings by Big Easy artists.

For the suites, artist Clare Crespo created intricate velvet hearts in display boxes, while artists Rebecca Rebouché, Emily LaCour Olson and Bruce Schultz contributed paintings and tintype photographs to the rooms. “Whenever we throw down roots in a new city,” says Sawdon, “we make sure to first take a deep dive, research and visit constantly to listen to the communities that call it home and find our people.”

Ace Hotel Toronto was born when Zinc Developments approached the chain about an opportunity to create a bottom-up project in the city’s downtown core. The architecture firm behind the Toronto property is Shim-Sutcliffe Architects, better known for its meticulously detailed private residences (including the renowned Integral House) and gemlike smaller works (such as the marvellous Wong Dai Sin Temple in Markham, Ontario). “Because it’s rare for [Shim-Sutcliffe] to take on commercial projects, the opportunity to work with them led us to take risks and reach new heights,” says Sawdon. “They’re dynamic and keenly attentive to the relationship between objects, buildings, landscapes, nature and people, pushing boundaries and concepts for human-oriented spaces.” 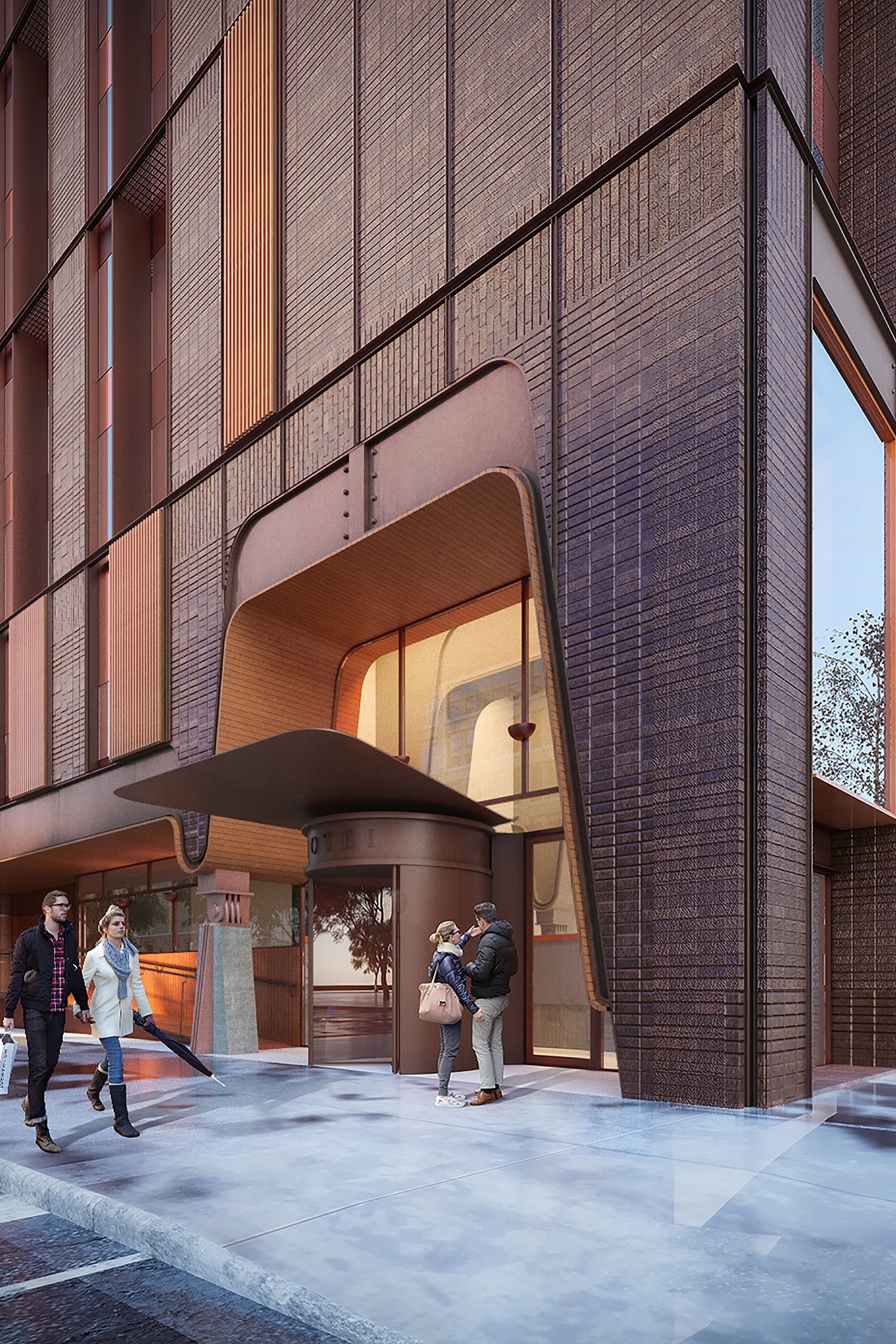 Shim-Sutcliffe Architects’ Ace Hotel Toronto is defined by a series of structural concrete frames, which give the entrance vestibule its unique form. 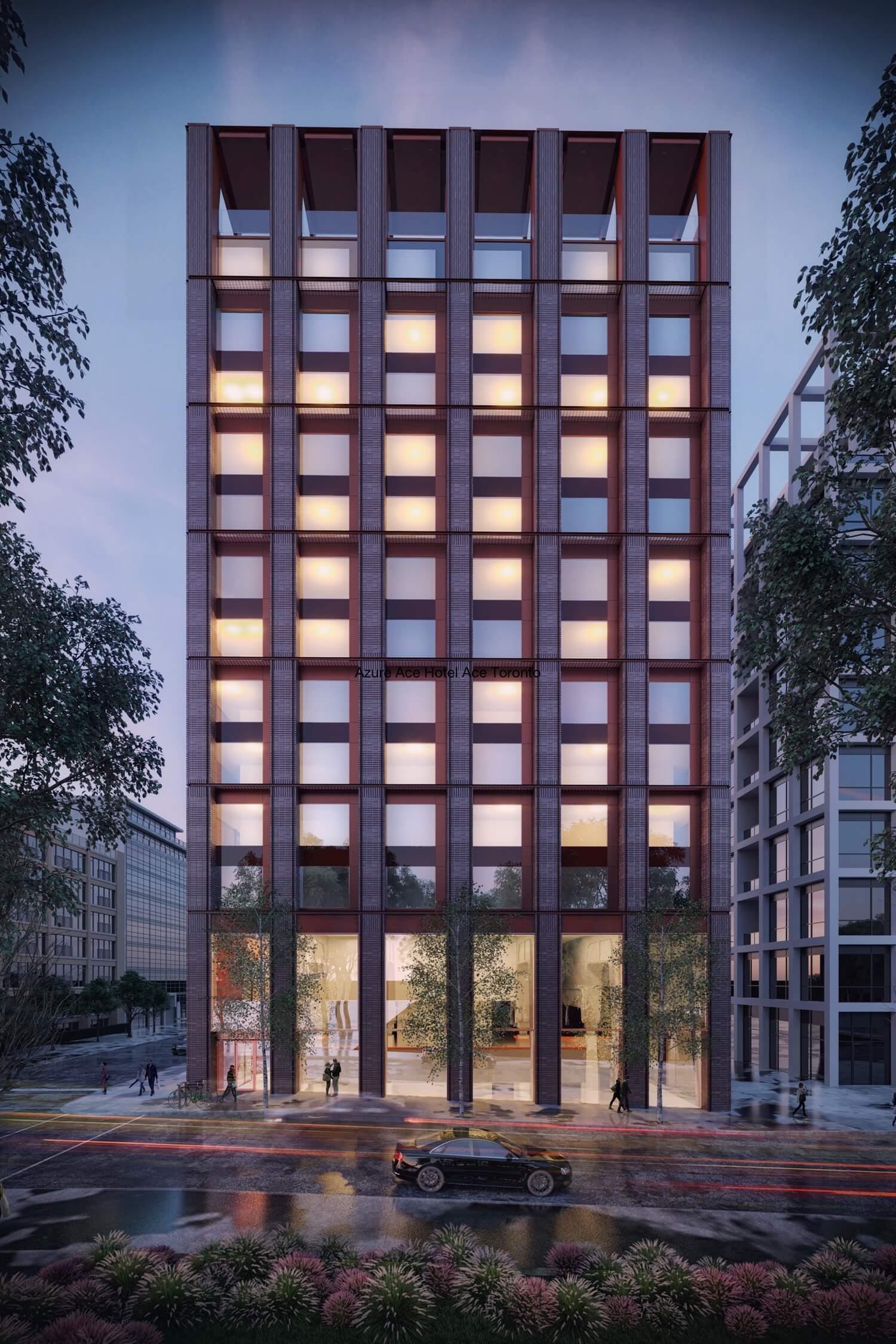 Seen from the back, the mid-rise’s brick and wood tapestry nods to the neighbourhood’s industrial fabric.

Ace Hotel Toronto, Sawdon adds, carves out a new architectural identity for the brand while also nodding to the city’s fabric. And she’s right. A series of poured-in-place concrete frames with robust steel knuckle joints gives the building its bold scale – the lobby bar is actually suspended from the concrete structural frames so that it floats over the ground-floor restaurant – while bricks, wood and generous openings result in a human-centric palette. Ace Hotel Toronto and Ace Hotel Kyoto are both new builds expected to be completed next year, bringing the brand full circle just as it begins its third decade.

For the past two decades, the hotel brand that defined hipster chic has had a proven formula for success. But it isn’t resting on its laurels: The group’s creative team is still taking calculated risks, as two recently launched spinoffs and a pair of new builds – including Ace Toronto – prove.