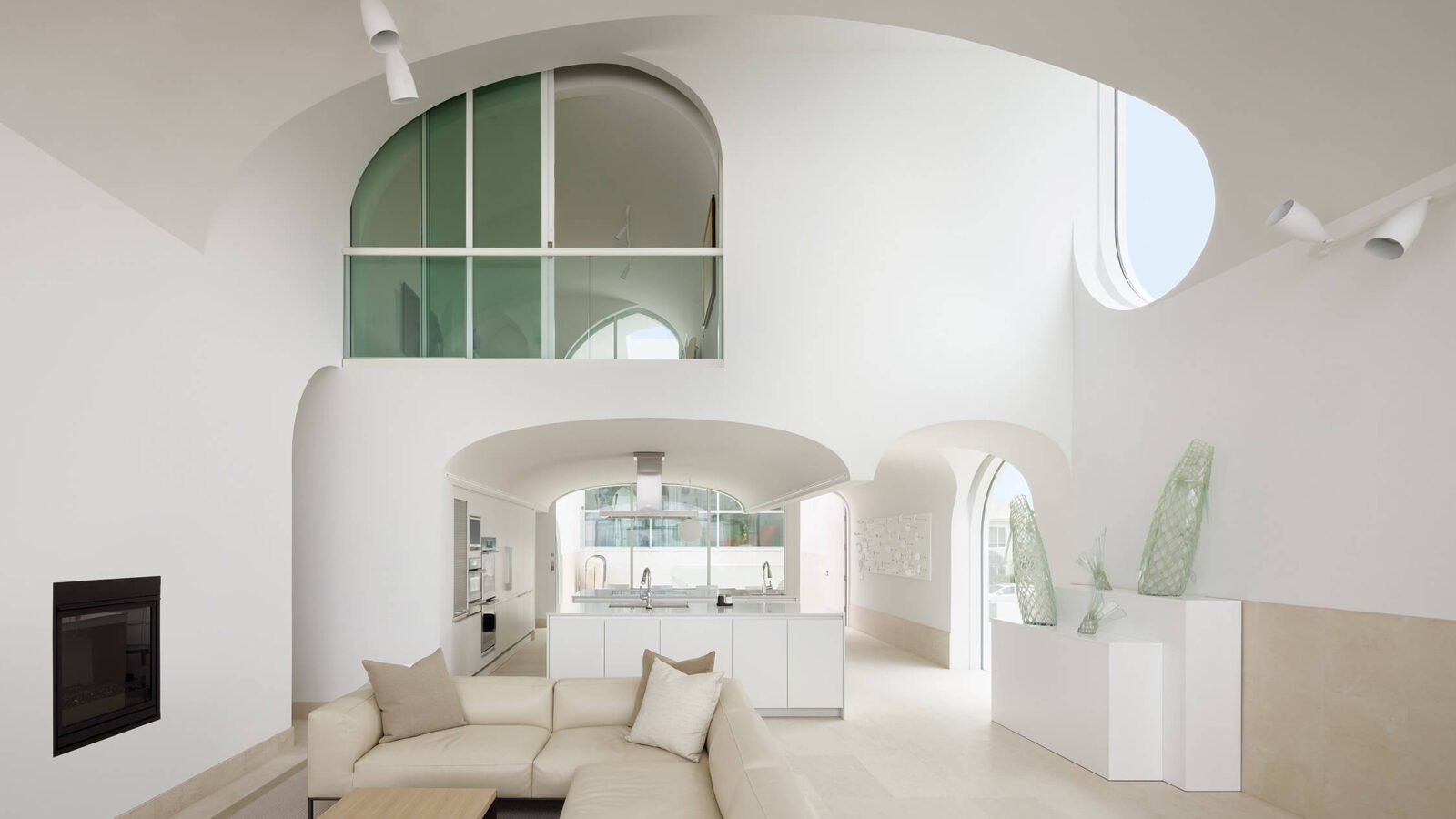 The 10 Most Memorable Houses of the Past Decade

From Johnston Marklee’s Vault House to Alejandro Aravena’s Villa Verde, these are the residential projects that stood out for us.

The single-family house remains a realm of experimentation for architects, and the decade has seen many feats in formal expression and social responsibility. We’ve witnessed experiments in structure and siting, like Sou Fujimoto’s super-minimal and ultra-voyeuristic House NA in the middle of Tokyo and Brian MacKay Lyons’ cliff-hanger in Nova Scotia as well as the incremental housing of Alejandro Aravena and MAD Architects’ work to bring attention to China’s disappearing hutongs. There was also the emergence of Chilean studios and Mexico’s bold female architects. In short, the 2010s introduced us to many marvellous houses. Here are 10 that we still dream about. 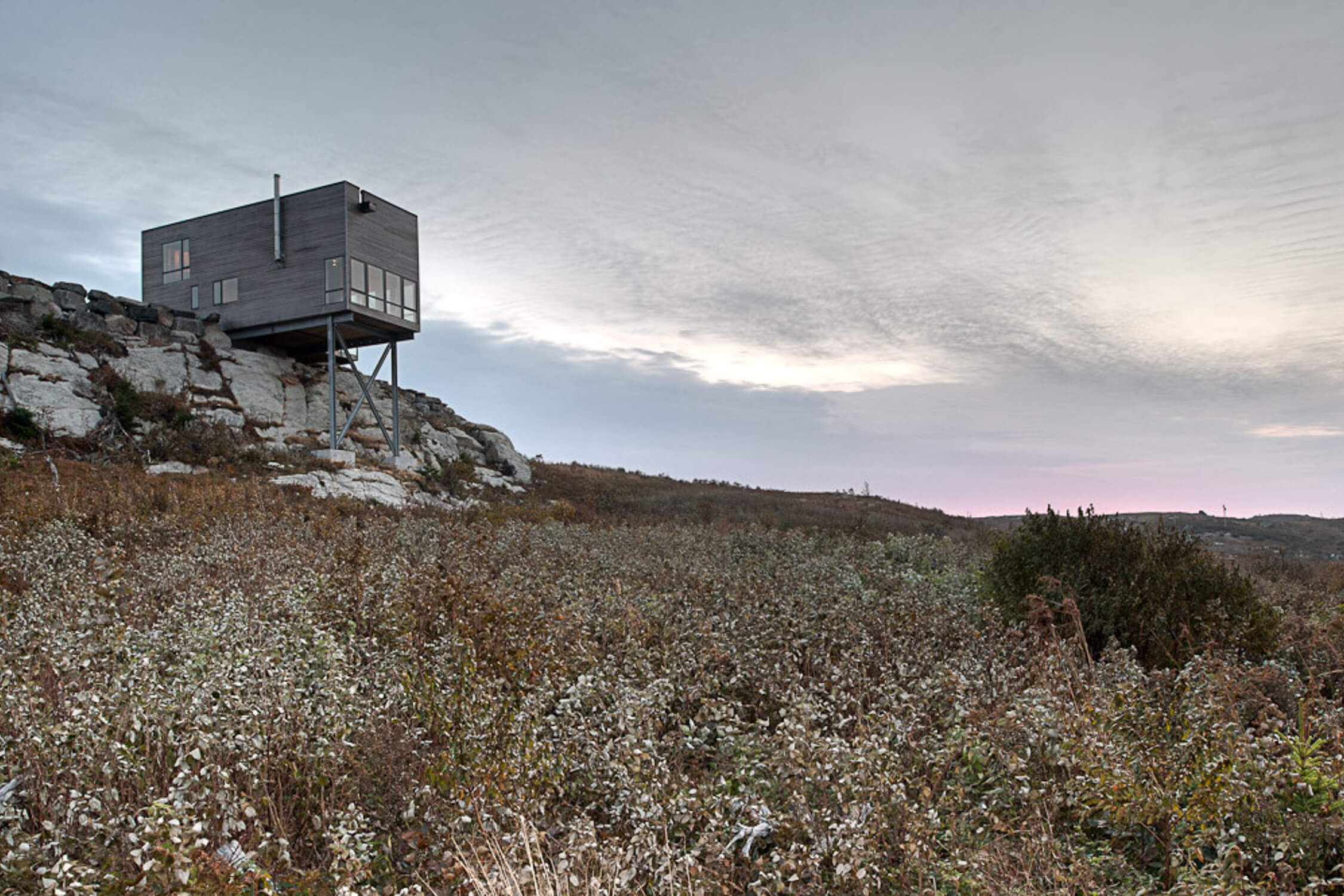 “I’m interested in making buildings that are silent yet say more – a lot more,” explains Brian MacKay-Lyons. The Halifax-based principal of MacKay-Lyons Sweetapple Architects could be discussing any number of his studio’s award-winning public and private projects, but here he’s referring to the 2010 exercise in restraint, Cliff House. Wrapped in greying cedar, the spartan two-storey summer cabin – only 89 square metres and located just over an hour’s drive from Halifax – is dramatically cantilevered off a cliff as two thirds of the structure appear to be propelled toward the water beyond. On approach, the house presents itself as a monolithic cube with a single cutout for the entrance. Inside, the exposed cedar walls, punctuated with black steel supports five metres tall, add a colossal air to the humble structure. It’s a sensitive work that not only reimagines local traditions (think the nomadic tilting houses of the region) but also succinctly summarizes a decade of Canadian residential design. For MacKay-Lyons, it’s “monumentally modest.” 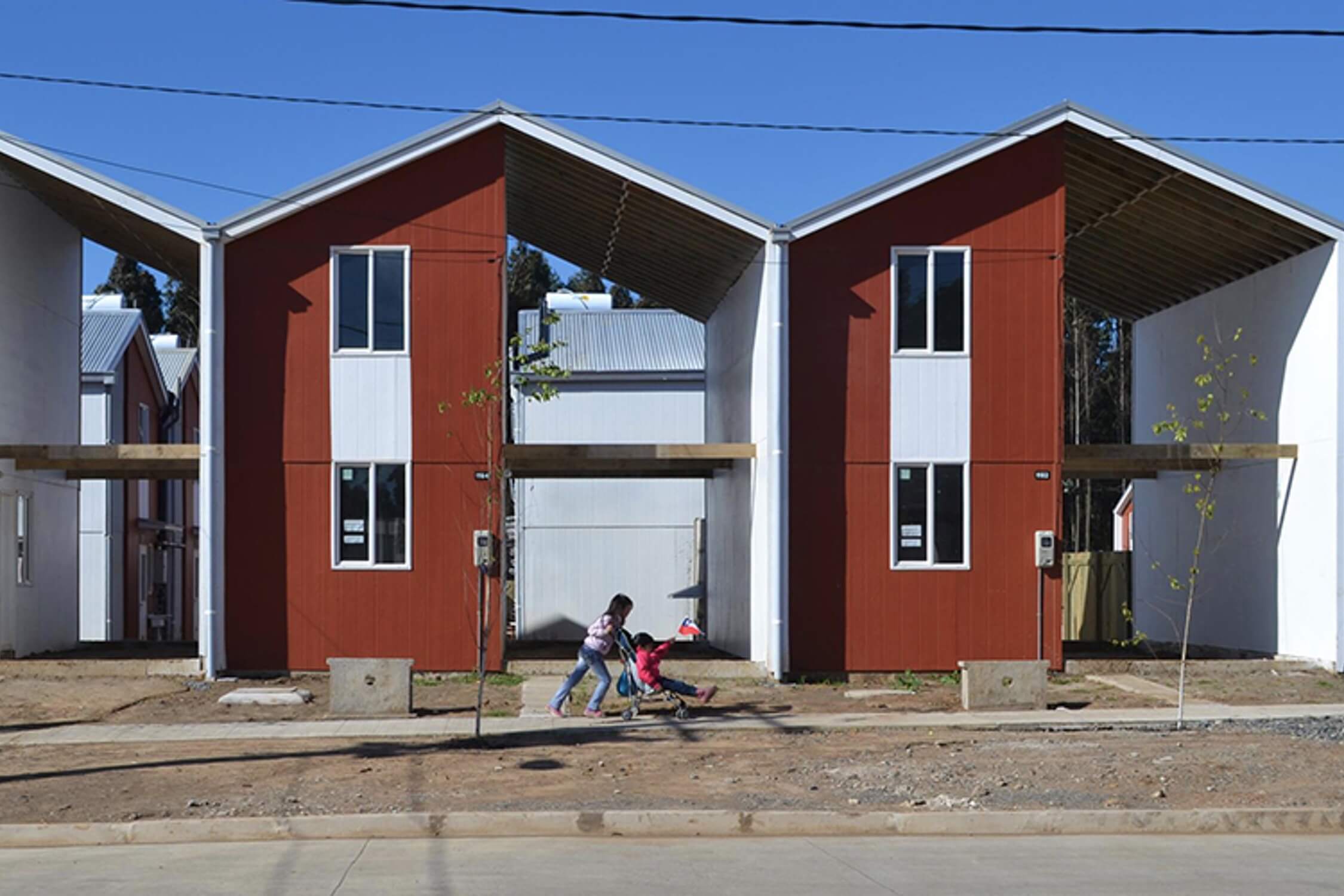 Over the past decade, Alejandro Aravena, who won the Pritzker Prize in 2016, has emerged as the world’s foremost social-good architect. This standing is in large part to the work he’s accomplished in the arena of incremental housing, a concept that dates back to the 1970s but that he and his firm, Elemental, made concrete through their various “half-a-house” projects. Villa Verde, completed in post-earthquake Constitución, Chile, was their second major urban development of this type. It was funded by the forest company Arauco, which employs thousands of workers in the city. With this project, the firm again embraced the half-a-house typology – providing a finished half and a non-finished shell that home-owners can build up over time with standardized materials – but with “higher standards both for the initial and final scenario.” The idea of providing low-income families with “half a house” has met with criticism, but in Chile, where subsidized homes are often only 40 square metres, the Elemental models – especially those created for Arauco, measuring either 55 sqm (fully subsidized) or 92 sqm (with a bank loan) – are a significant improvement. 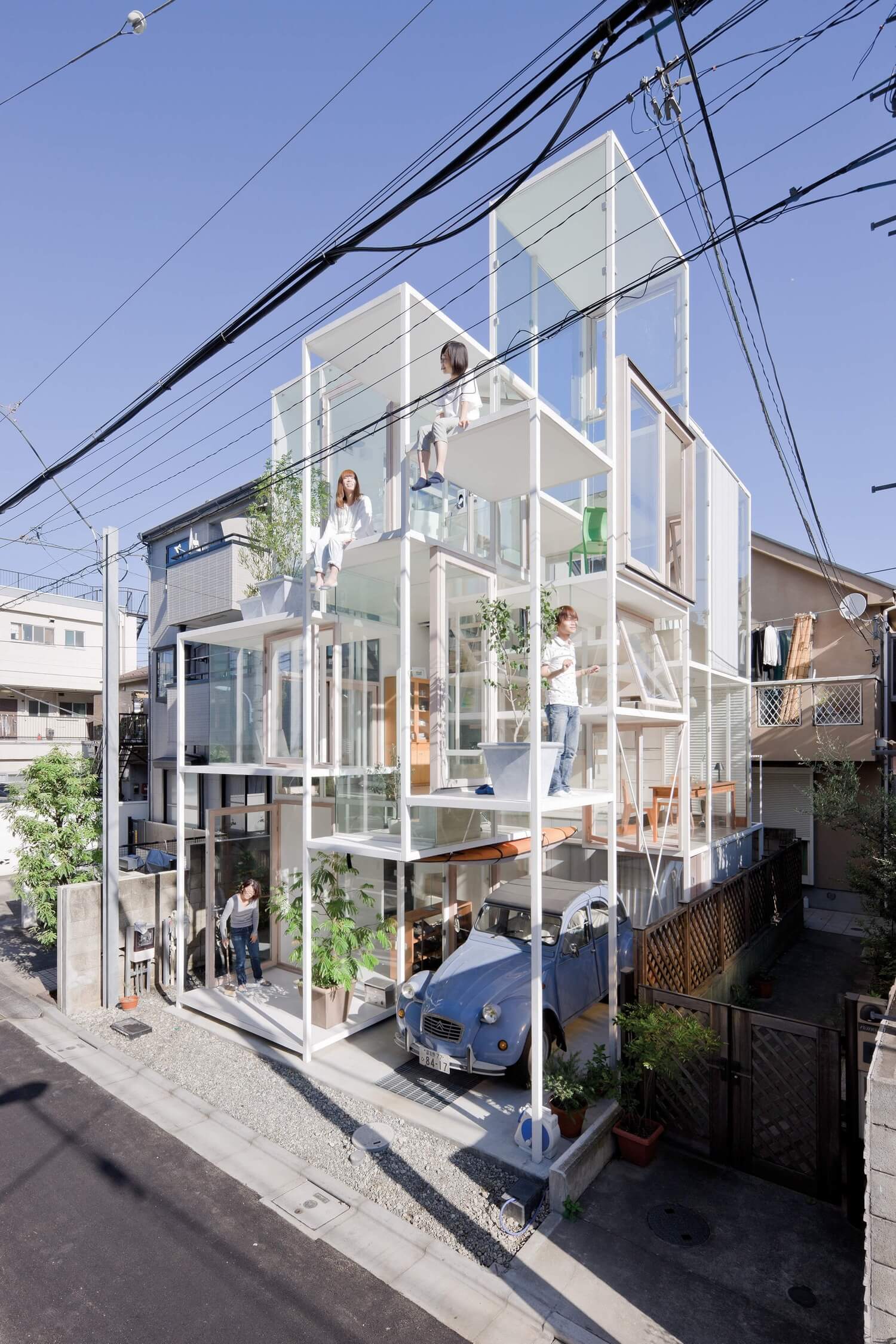 It’s the ideal dwelling for the Look-at-Me Age: Sou Fujmoto’s three-storey House NA in Tokyo is almost entirely devoid of (opaque) walls, making the act of living in it a kind of performance. But it’s also no mere gimmick. Despite its industrial look – the white-steel-frame structure, composed of staggered platforms, rather evokes scaffolding – House NA was inspired by nature and is meant to simulate a tree, its various levels akin to branches, across which discussions, platform-hopping and other “moments of richness” are encouraged. This same conviviality is projected to the street: Although it’s tempting to think of House NA as an exhibitionist’s dream, Fujimoto intended its transparency as an antidote to isolation, a growing problem in urban Japan. And in case you were wondering, he did include pockets of privacy in the home, including “for when two individuals choose to be close to one another.” 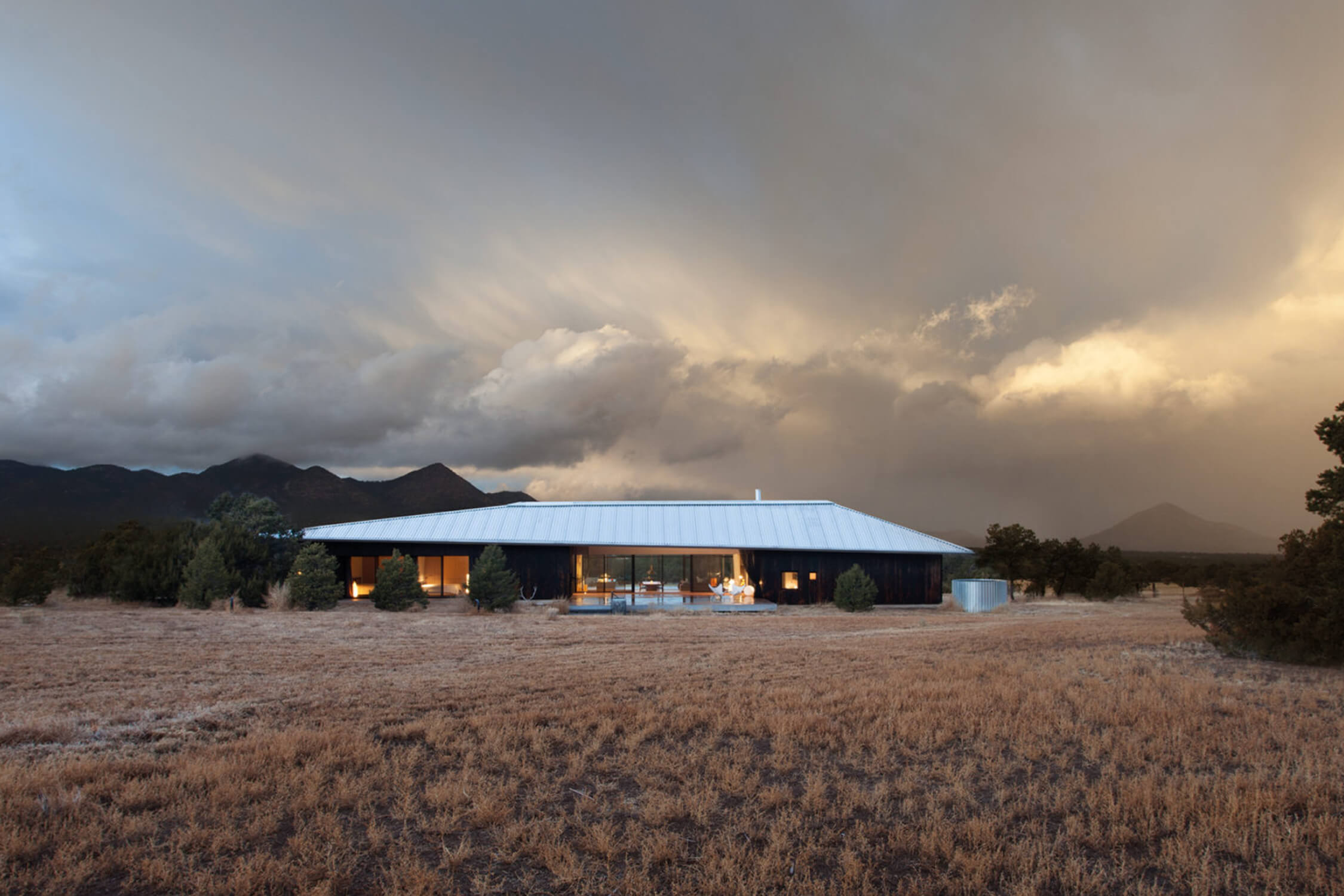 While Rick Joy has also completed public and commercial projects, he is best known as a master at creating single-family homes, from the Tucson Mountain House to the Desert Nomad House, that stand as odes to their amazing locations in the Southwest desert. Lone Mountain Range house, designed for a Wagyu beef–ranching couple in the high desert of New Mexico, features a slightly askew corrugated metal roof that caps a six-bedroom family retreat. A wooden deck divides the house’s spaces into two wings — one for private spaces and the other for guests’ rooms — and sets the scene: Joy’s homes are designed as much to provide views out as they are to comfortably house those within. And much like his previous projects, this residence is also light on the Earth: it includes a 6,400-gallon rainwater harvesting system, with two water-harvesting tanks at two corners of the building. 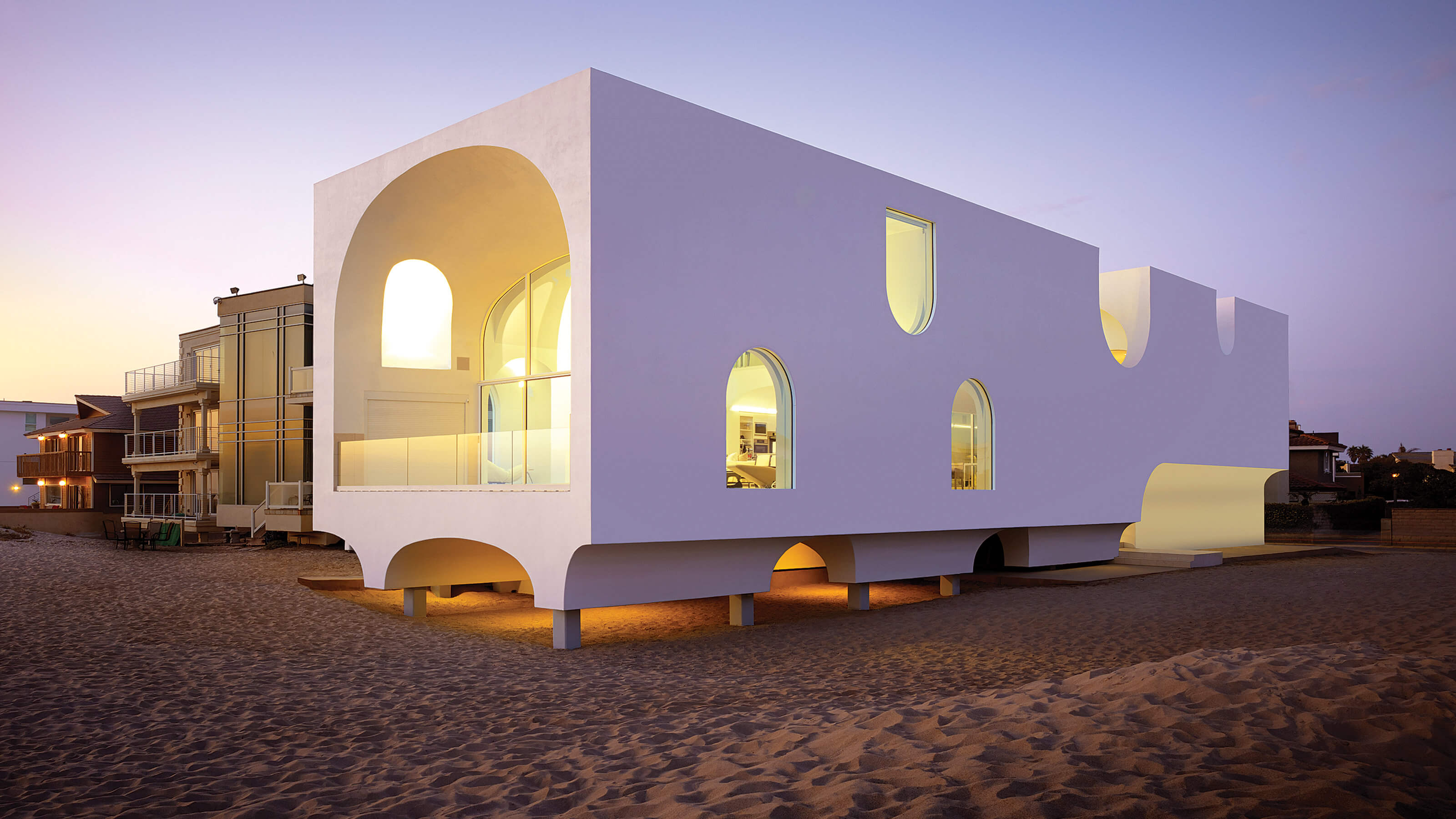 This isn’t your average beach house. “The owners’ only complaint is that it draws a lot of visitors,” Mark Lee says of Chicago studio Johnston Marklee‘s 2013 Vault House. The house is nestled on a long, narrow lot with minimal beach frontage in Oxnard, California – so Lee, with co-principal Sharon Johnston, conceived the interior as a series of interconnected vaulted spaces that prioritize views out to the North Pacific. On the outside, these gestural voids appear almost sculpted from a monolithic white structure, which includes the low pillars on which the house rests and the side entrance into the central courtyard. Inside, the organic forms frame a double-height living space while acting as a unique backdrop for the owner’s extensive collection of contemporary art. Like the many passersby compelled to pause and peer inside, we’re still looking at this home in awe. 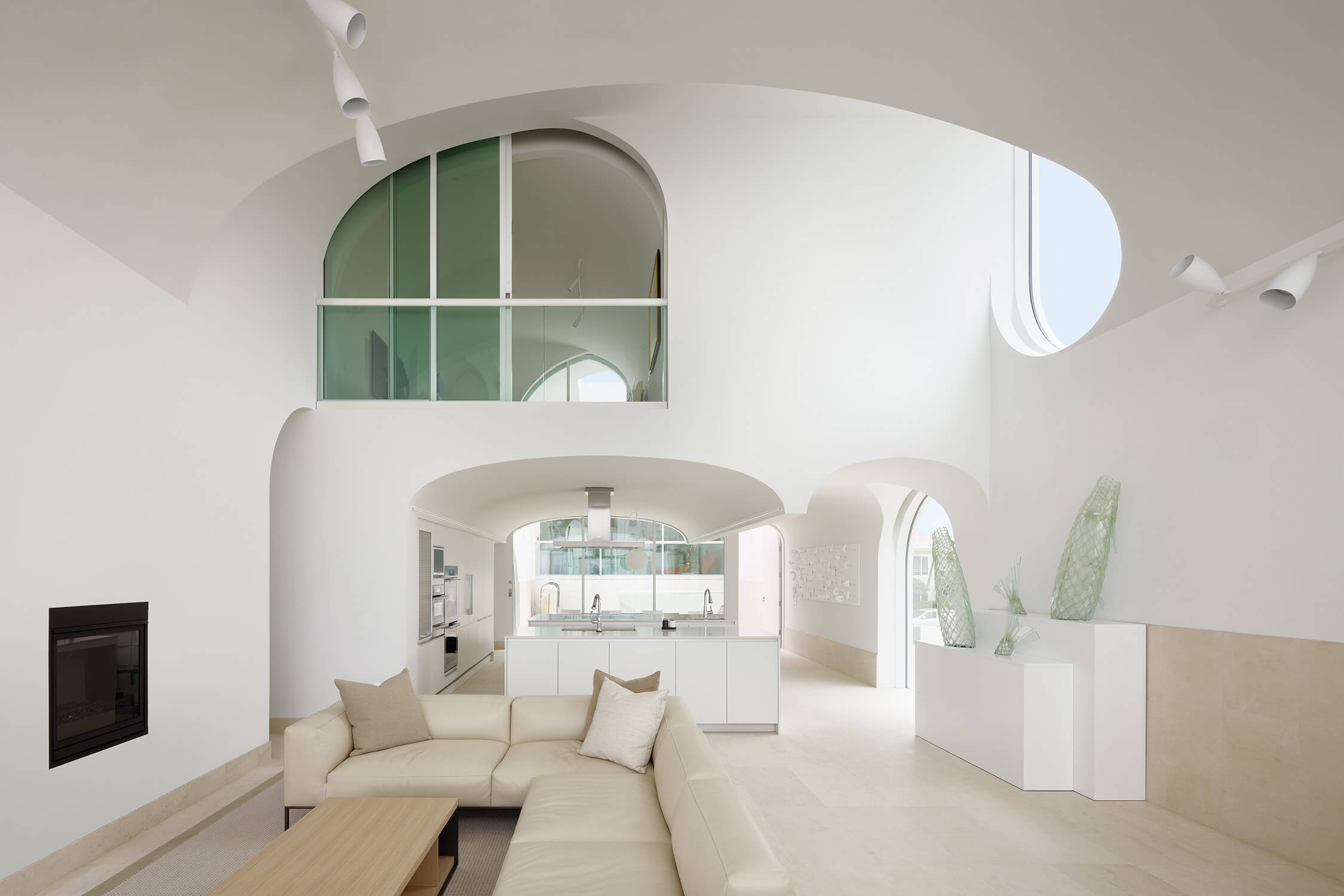 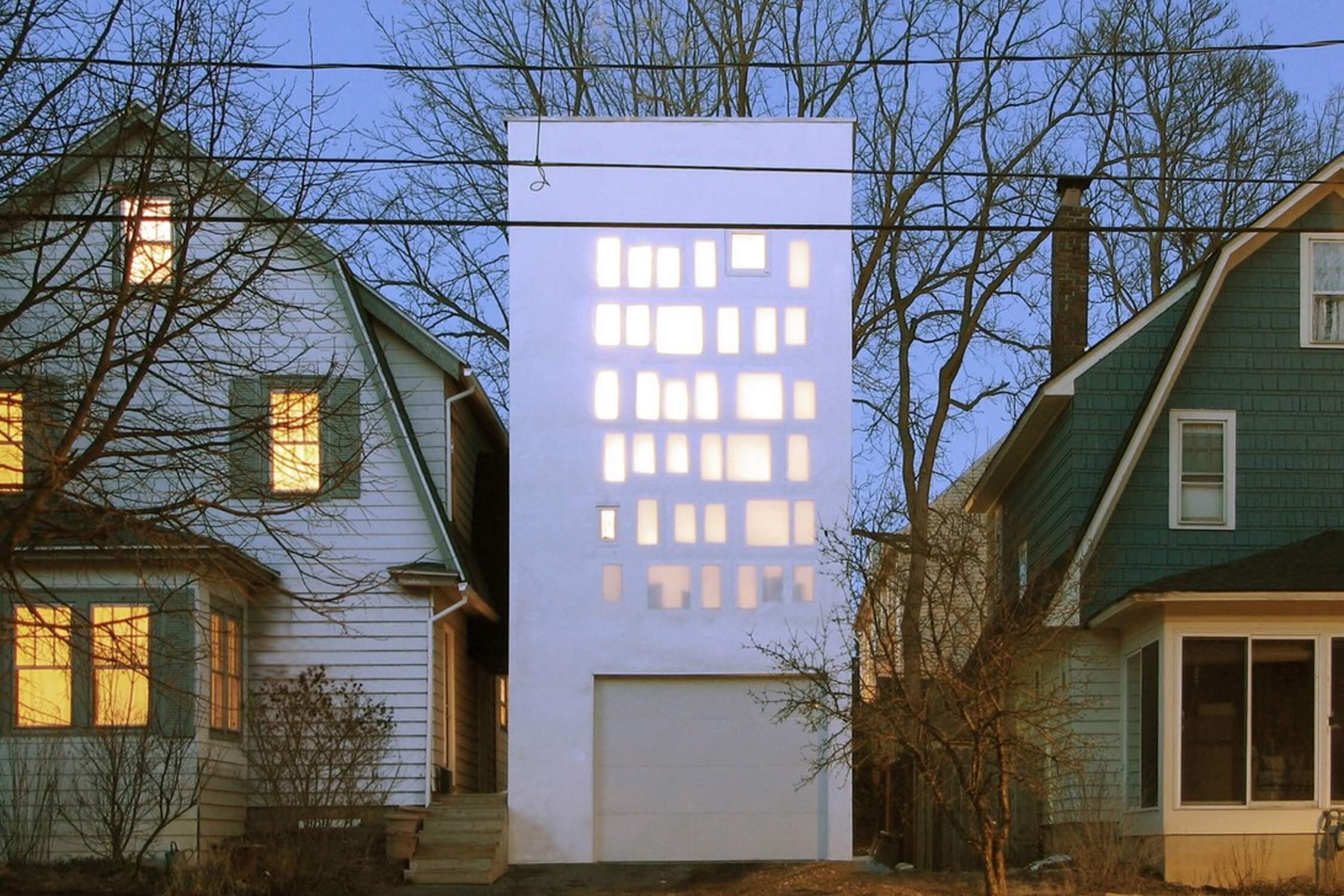 This unusual extension to an ordinary house in Syracuse, New York, is strange and wonderful. Designed by Para Project for two poets who needed more space for a writing studio and library, the three-storey block is wrapped in a gauzy membrane of translucent silicon-impregnated fabric that augments the hand-drawn feel of its rows of tiny windows. As we wrote when the project won the 2015 AZ Award for Best Residential Architecture, the 105-square-metre addition “embodies a profound sense of freedom and luxury.” The interiors are just as unexpected as the facade: The second storey features both the brief-required library – and a dreamy one at that – as well as a concrete tub sunken into the floor. 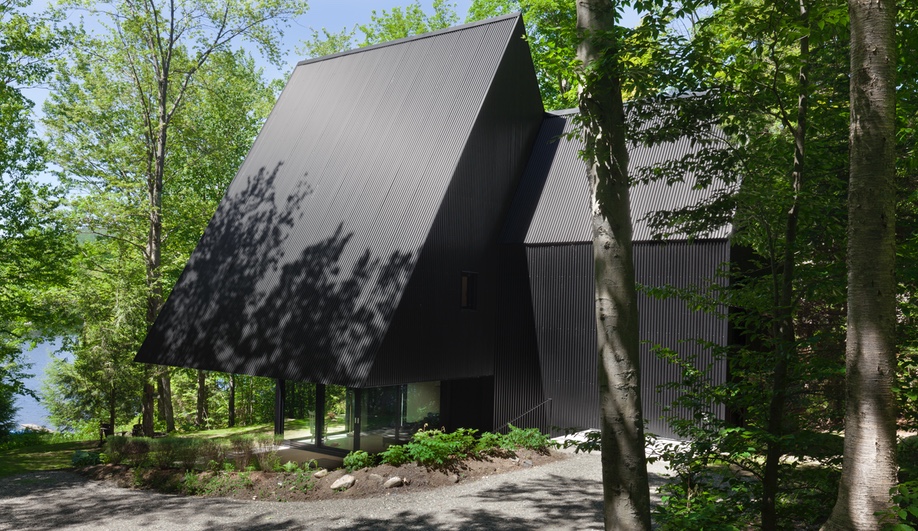 If you were to happen on Fahouse in Quebec’s Eastern Townships, you would be forgiven for thinking you had somehow entered a fairytale setting. Clad in black corrugated metal, the strikingly angular home is nearly indiscernible from its hemlock forest surroundings, but up close it makes an unforgettably curious impression. What’s not surprising is who was behind the design: Montreal’s Jean Verville, whose signature style perfectly balances the minimal with the whimsical. For Fahouse (which won an AZ Award for Best Single Family Residential Architecture in 2016), Verville tapped into a familiar typology but made it completely his own.

Fahouse riffs on the A-frame with two exaggerated gables, one of which is perched on a glass box and cantilevered over a concrete terrace, while the other extends nearly all the way to the forest floor. Windows in different sizes and shapes punctuate the exterior to let light inside, where Verville employed a restrained material palette of steel framing, concrete and, most notably, Baltic plywood for the walls and floors. Throughout, sloped half walls, understated linear lighting strips and the odd splash of red are indicative of Verville’s fondness for the unexpected. 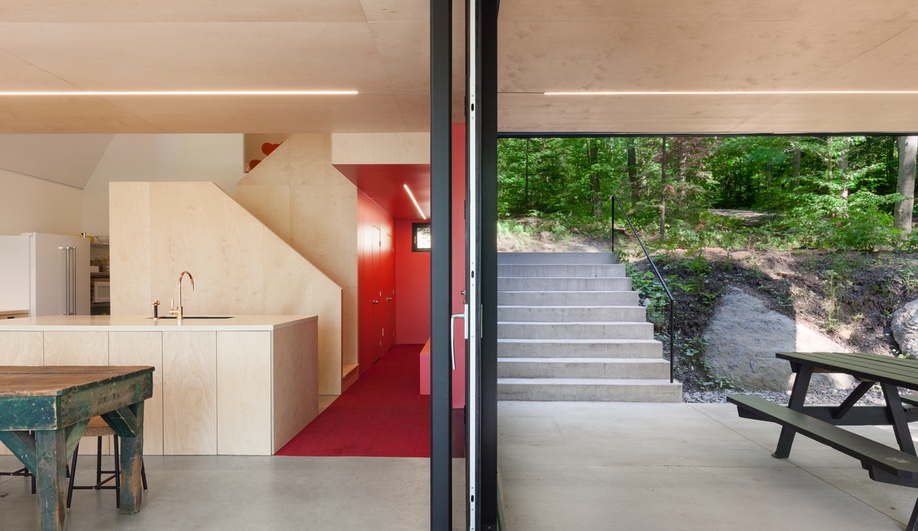 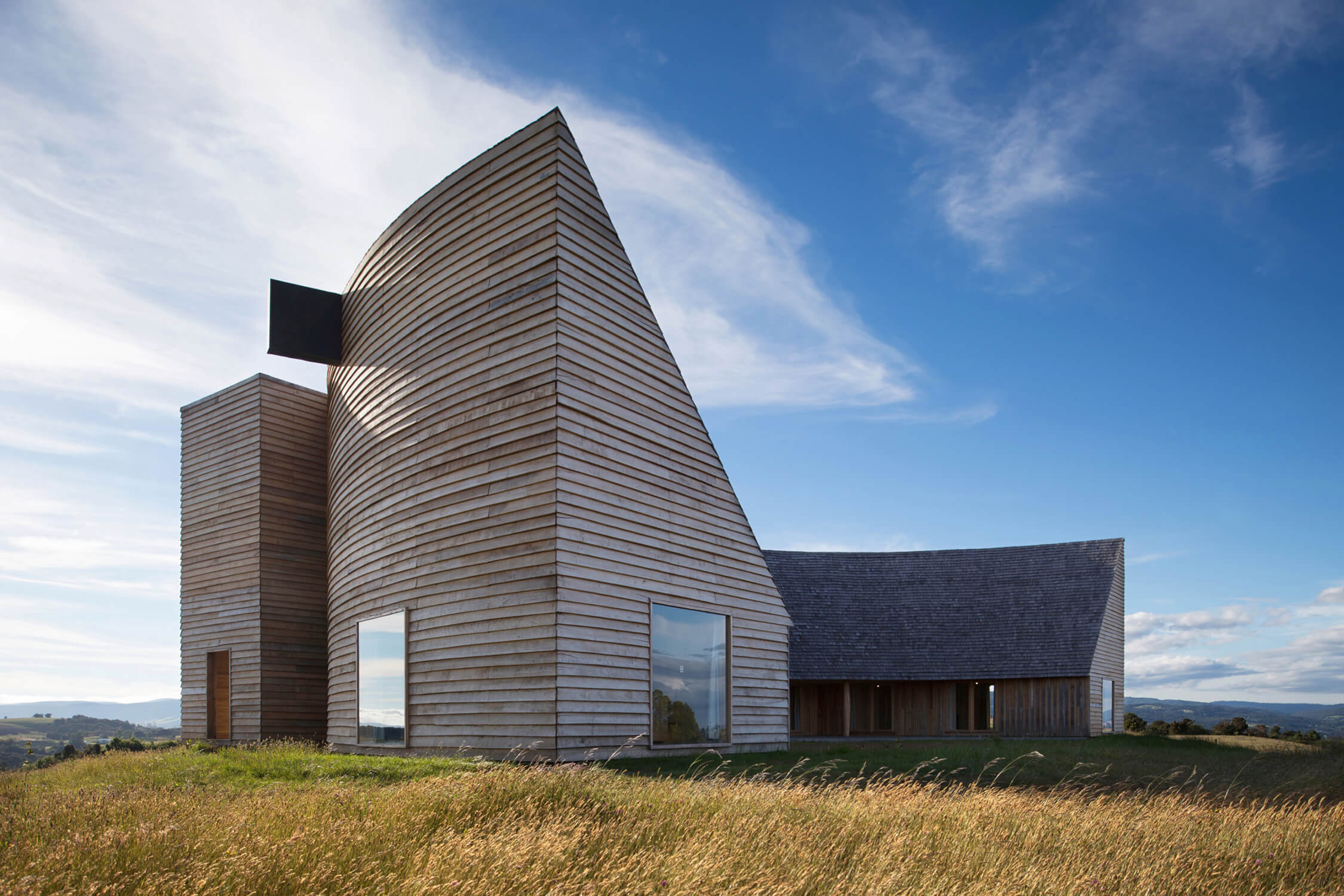 Sofia von Ellrichshausen and Mauricio Pezo have been reinventing the art of living through their residential architecture for over a decade. Rode House, which unlike the firm’s more rectilinear and concrete-faced projects (like Poli, Solo, Loba and Cien), features a more curvaceous form and wood as its warm cladding material, but it’s also an experiment in geometry that elevates the firm’s core ideas. “Its form results from a fairly schematic formal articulation: the intersection of half a cone with half a cylinder,” von Ellrichshausen explains in Azure’s Jan/Feb issue. She goes on to say that this sublime shape was also informed by the geographical site in Chiloé Province, Chile: “This creates a massive wall toward the prevailing winds and a shallow courtyard, with deep shaded terraces, toward the inner bay, protected from the wind.” 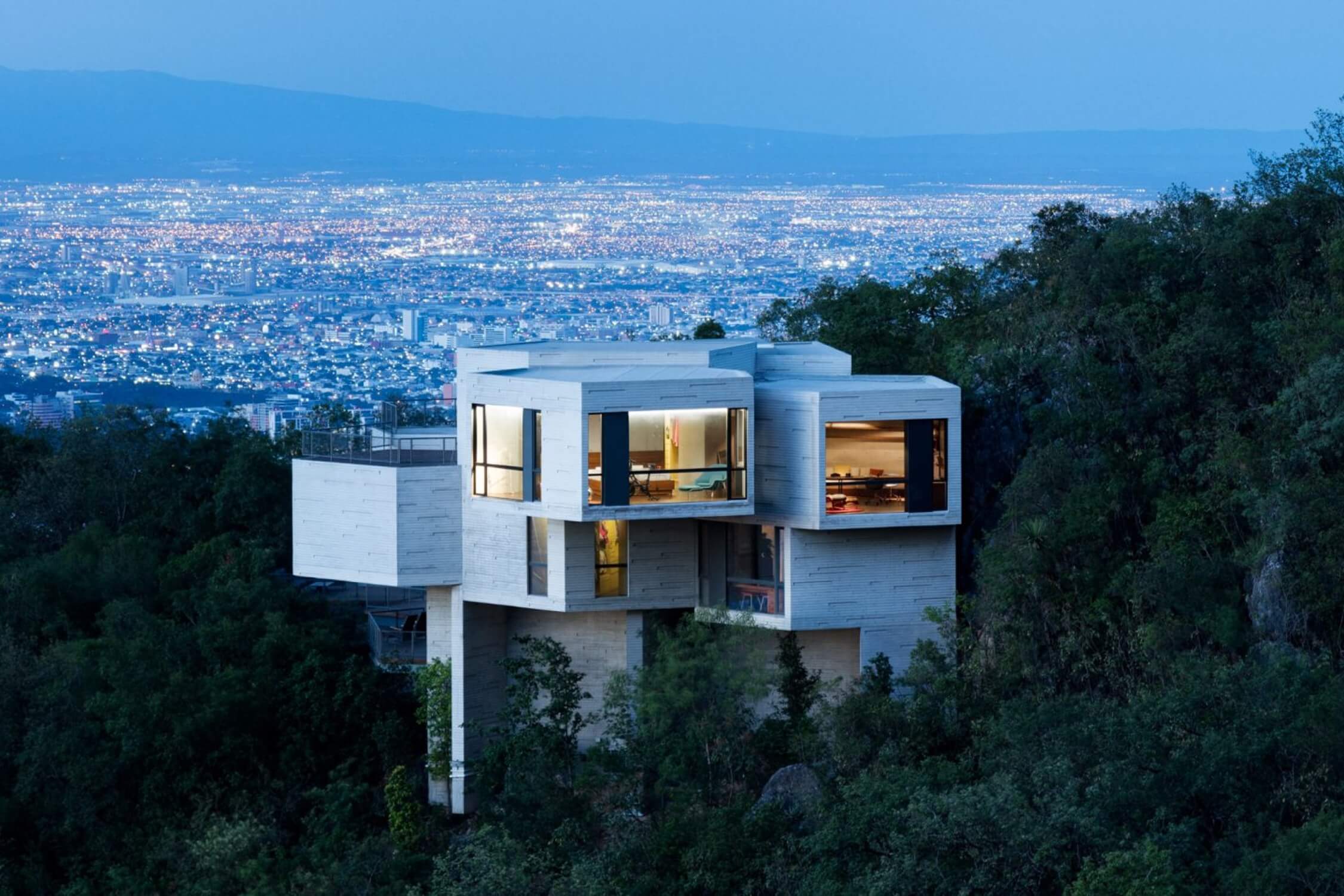 The global ascent of women architects was, happily, one of the biggest industry phenomena of the 2010s. And a major source of the talent was Mexico. Among that nation’s breakout luminaries is Tatiana Bilbao, who built an international reputation over the decade for her socially minded architecture, especially housing. Bilbao’s Ventura House, a five-sided concrete stunner that clings to a hillside overlooking Monterrey, isn’t exactly in the low-cost category, as her contribution to an experimental Hidalgo community with fellow countrywomen Frida Escobedo and Fernanda Canales is intended to be. But the single-family home exhibits Bilbao’s trademark sensitivity to context and user experience: The elegant modular structure seems to rise organically from its cliffside setting, like a geologic formation, with killer views as a bonus. It also reflects Bilbao’s range and only hints at what the 47-year-old might produce in the future – affordable, opulent and everything in between. 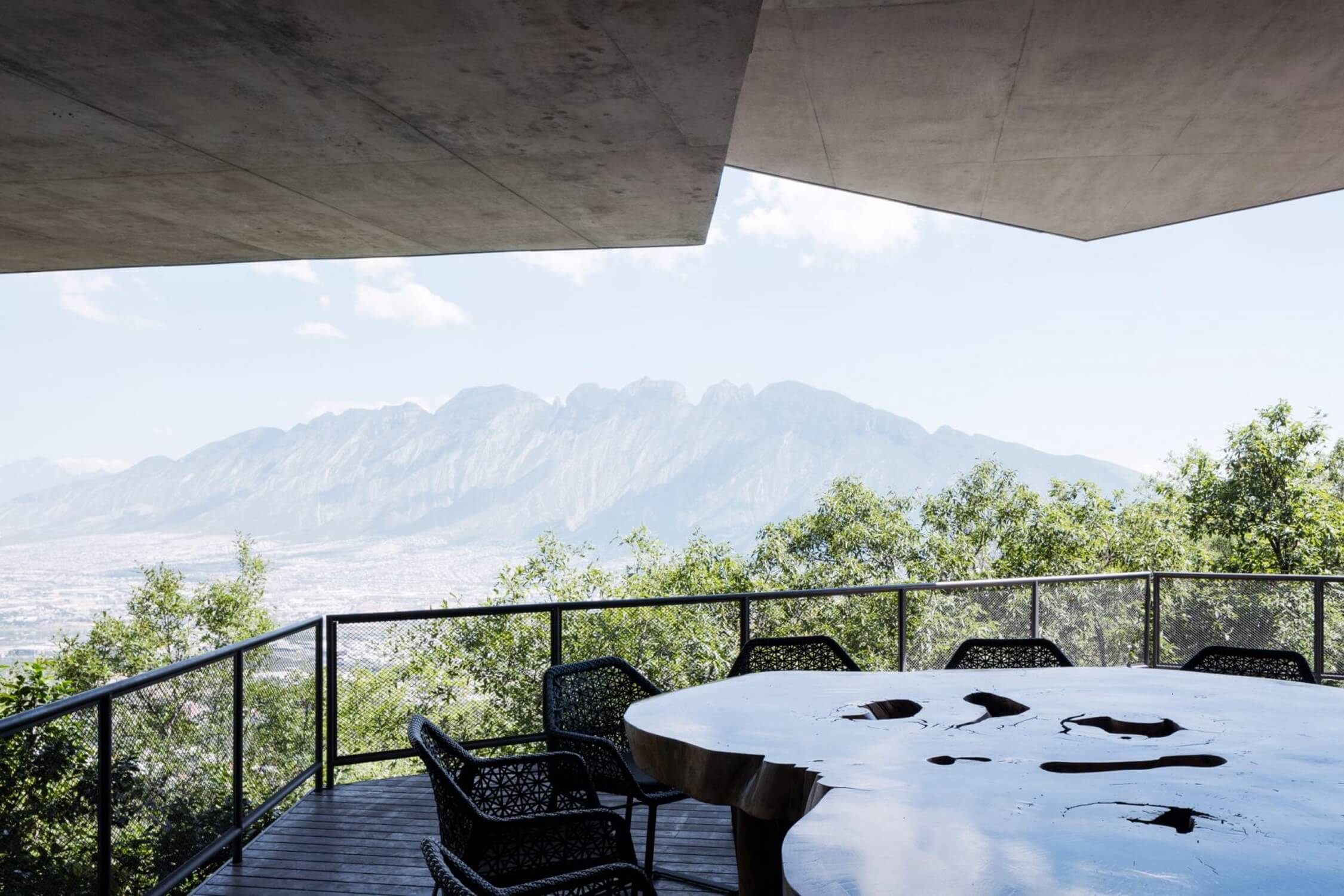 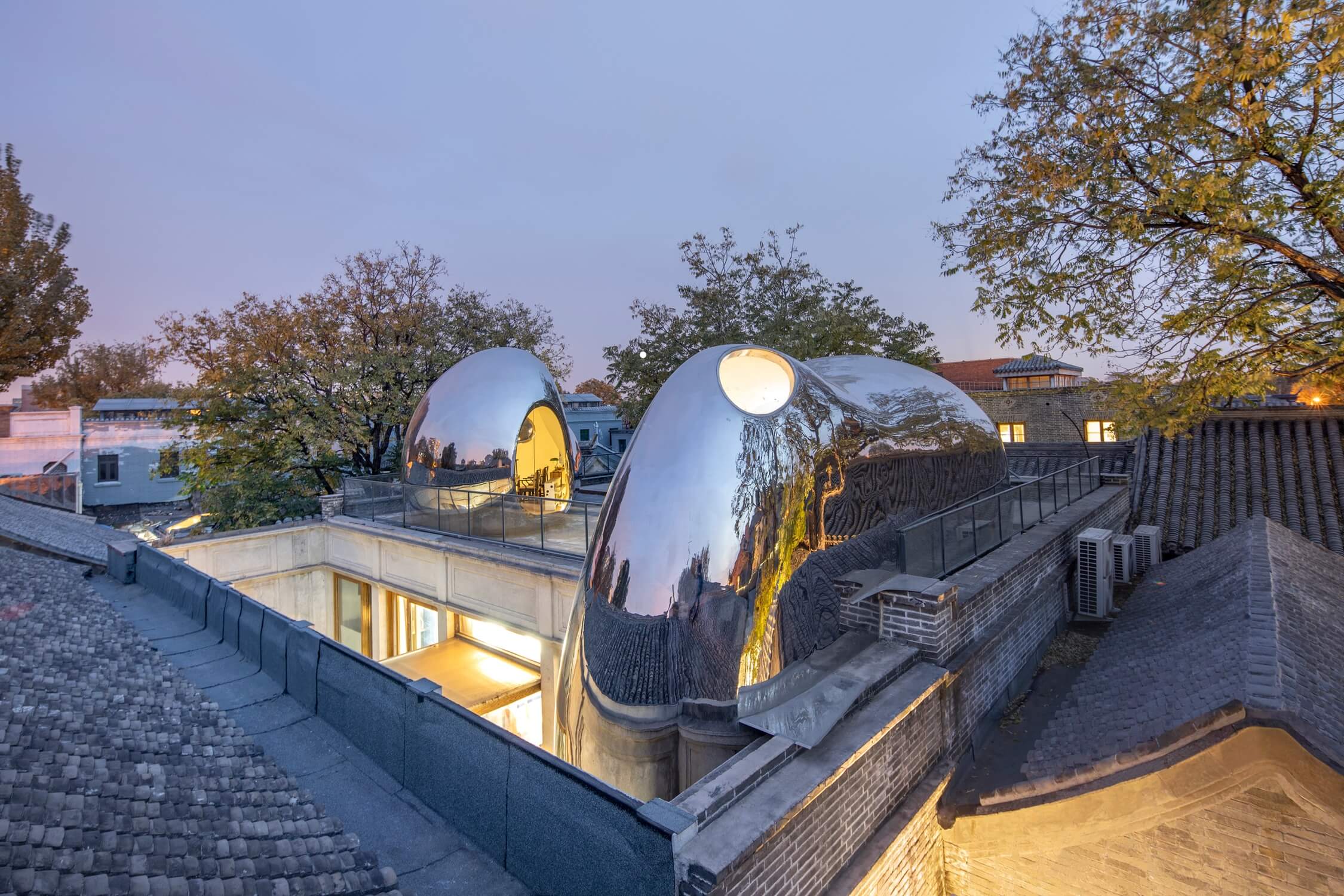 Hutongs, the narrow alleys and traditional neighbourhoods formed by historic courtyard houses in Chinese urban centres like Beijing, are becoming increasingly scarce as the city makes way for newer, more expansive infrastructure. To combat this erasure, MAD Architects has developed a series of interventions that, alongside renovations to the dilapidated homes, look to re-articulate the importance of these heritage spaces. In their most recent effort (building on their first iteration in 2009), two bulbous metallic forms penetrate an existing structure that once served as the city’s first international hospital to blend contemporary development with this unique Chinese typology. “I hope that these bubbles will serve as vital newborn cells,” says principal Ma Yansong of the mirrored appendages that appear to have grown from within the structure over time, “giving the traditional hutong new life, and revitalizing the community.” (Read the full story.) 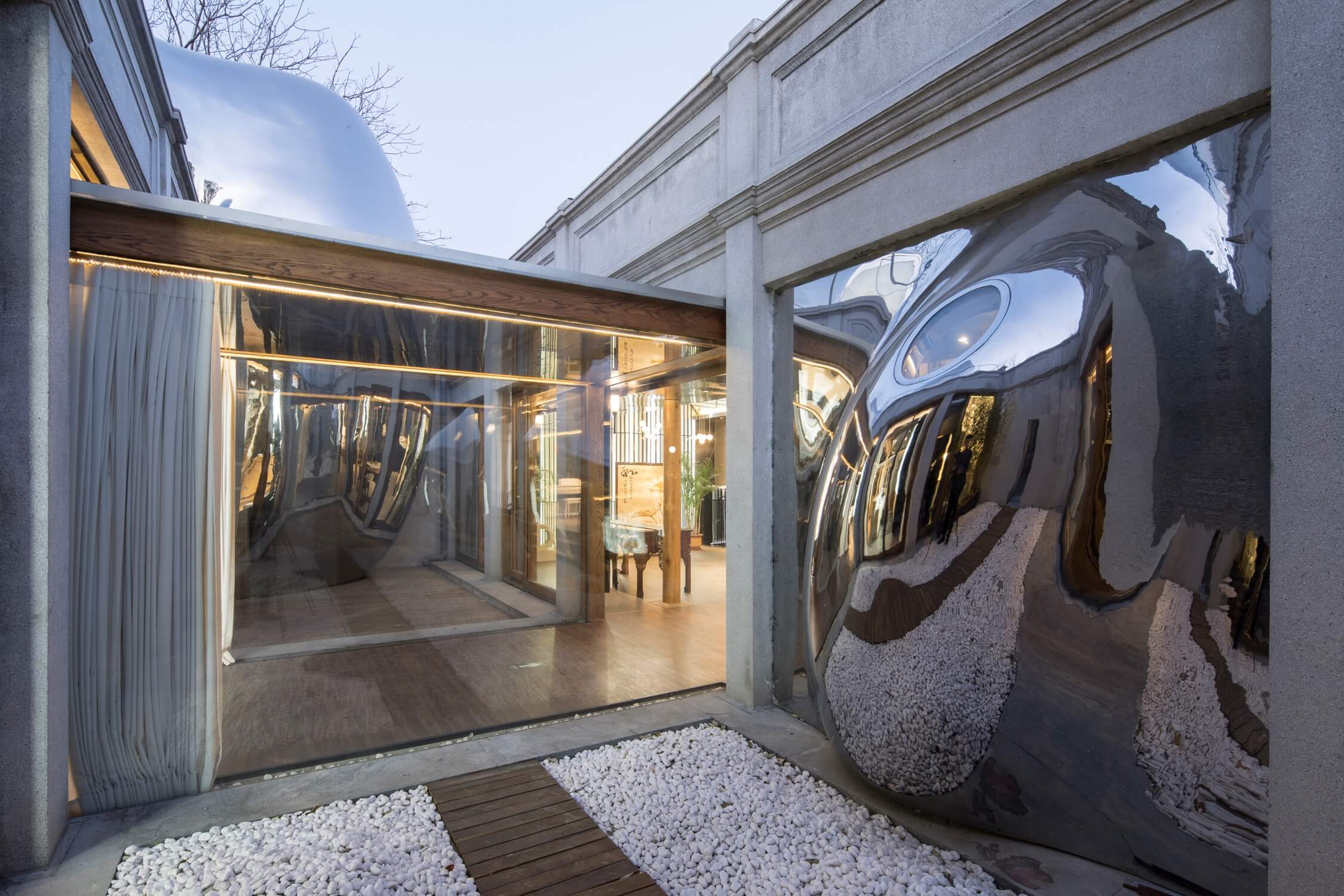 From Johnston Marklee’s Vault House to Alejandro Aravena’s Villa Verde, these are the residential projects that stood out for us.