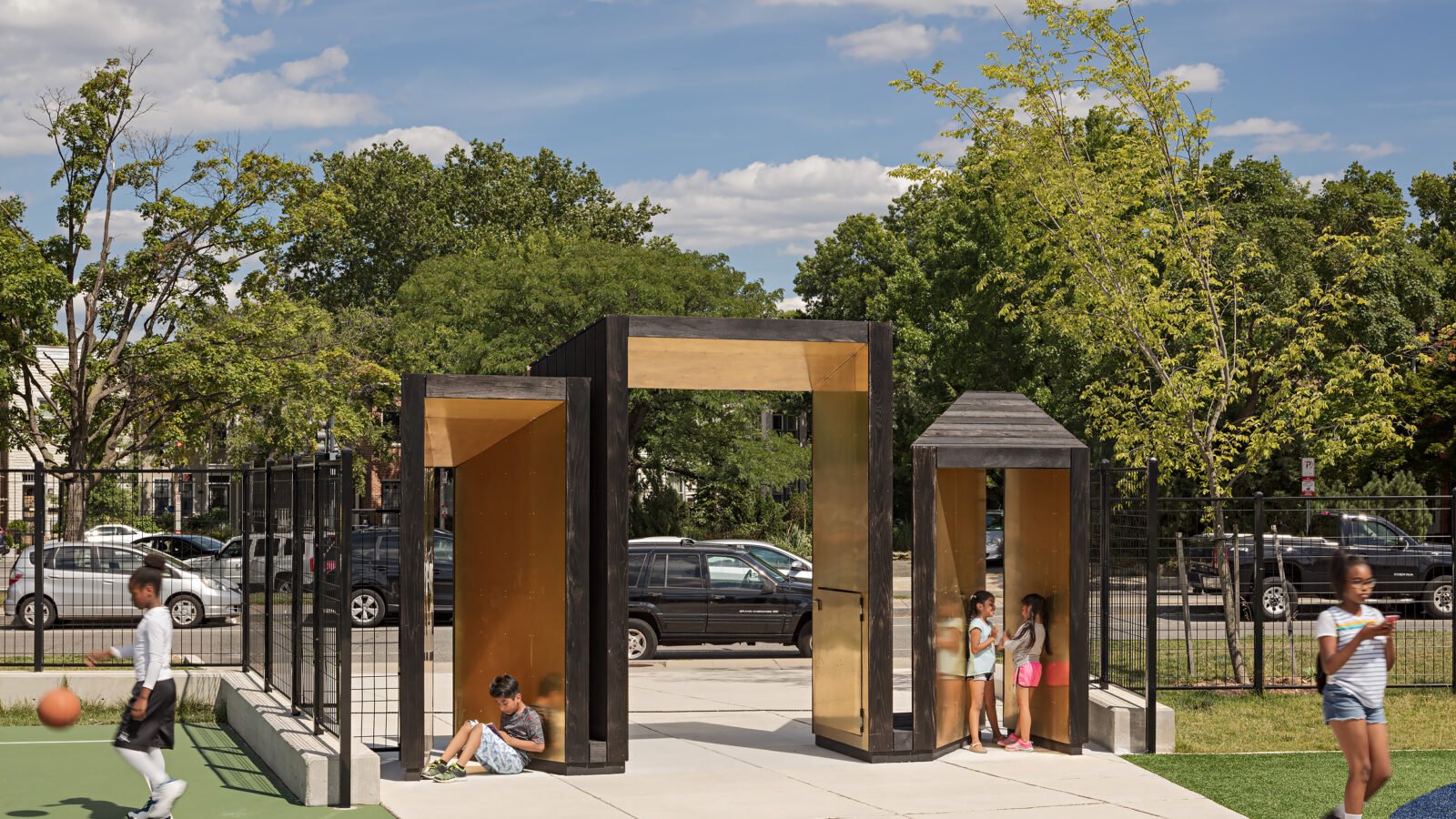 In D.C., After Architecture’s Camp Barker Memorial remembers the unforgotten.

My grandmother was part of the Caribbean’s second wave of migration to Canada during the 70s. She left Jamaica with virtually nothing except for an aspiration that many migrants have: to cultivate a better life. I feel indebted to her in many ways. Her decision to leave into the sea of precarity that was Canada has afforded me the privileges that I’ve come to know, but I’ve always had a complicated relationship with the idea of citizenship, belonging and how it intersects with what it means to live on occupied territory. As a Black woman, too, fostering a real sense of security, even in the countries and cities I call home, seem to be a fleeting illusion. There’s not a day that goes by where I’m not reminded of the sacrifices that were made so I can live the way (and in the conditions) that I do.

Anti-racist scholar Dr. George Dei once shared with me, “Literal blood had to be shed so you can be here,” and given that the work of memorials seem to be bound up in the sacrifices, death, memory and legacy of an individual, there are countless amounts of people whose names we’ll never know that aid in securing those infamous wins. In Washington D.C., After Architecture’s latest embodies an ethos that is antithetical to who is prioritized in the process of national memorializing: victims of oppression.

The Camp Barker Memorial sits at the entrance of Garrison Elementary School. It actualizes as three portals that welcome parents and children onto the school’s property. Framed in charred wood and accented by an interior of reflective brass — an intentionally subversive departure from Washington’s white marble-adorned memorials – it shares the history of the land on which the school is situated on and invites people to reflect and fosters awareness about Camp Barker’s past. The charred wood elicits a sense of resilience, as it is resistant to UV, weather, rot, fire and insects. A blackened bronze narrative bas relief, sculpted by Vinnie Bagwell, is featured on each. Bagwell is known for her works that celebrate and share African-American history, and figures like Harriet Tubman and Abraham Lincoln are depicted throughout. 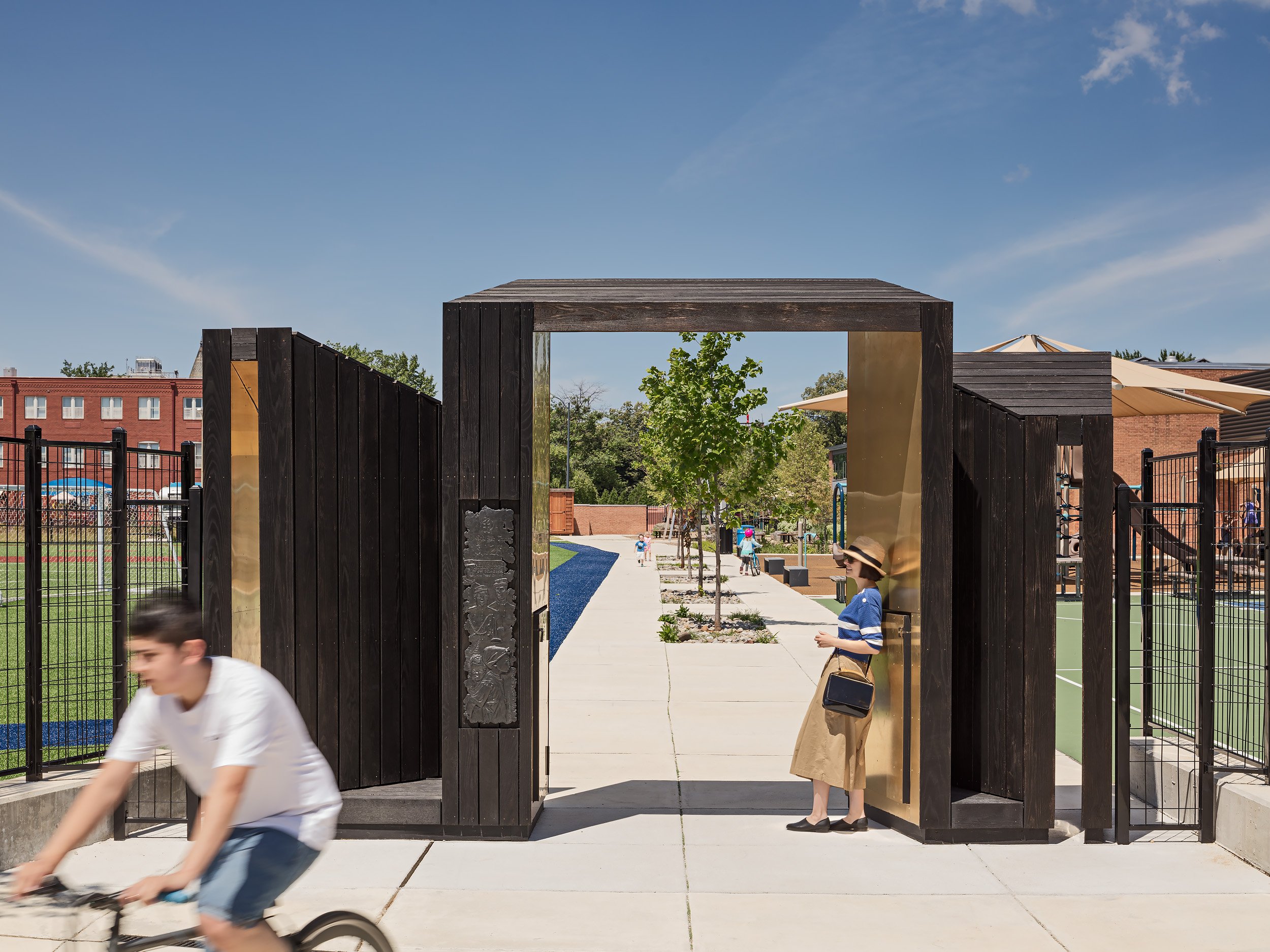 Garrison Elementary School was once a site for soldiers in the Civil War who utilized the original buildings as barracks. It was later used as a “contraband camp”: an area that temporarily housed then-enslaved African-Americans that were legally considered contraband. The portal designs are in conversation with this history.

“In a time when the role of monuments, particularly those to the Civil War, is being debated by many in the United States, this project aims to shed light on oppression rather than celebrate valor in battle, in turn developing an architectural approach distinct from the classical language and materiality of American monuments,” shares After Architecture. Over the past three years, several monuments have been taken down from public spaces, as many of the victories they celebrate were predicated on the disenfranchisement of African-Americans.

In thinking through the design of the memorial and its intention to encourage people to reckon with America’s past, I couldn’t help but think about the irony of its location — a school where America’s future is being made. The folded planes, which make up its floors, walls and roof, evoke walkthrough metal detectors. Considering the implications of what is categorized as “contraband,” it’s easy to think about the intersection of educational institutions and contrabands, in this case, guns. As of last month, a CNN report indicated that there had been 22 school shootings so far this year. Last year was dubbed the “worst year for US school shootings;” 113 individuals died or were injured during these incidents. This doesn’t include other instances of gun violence outside of schools, where it’s been reported that the country averaged one deadly mass shooting a month. 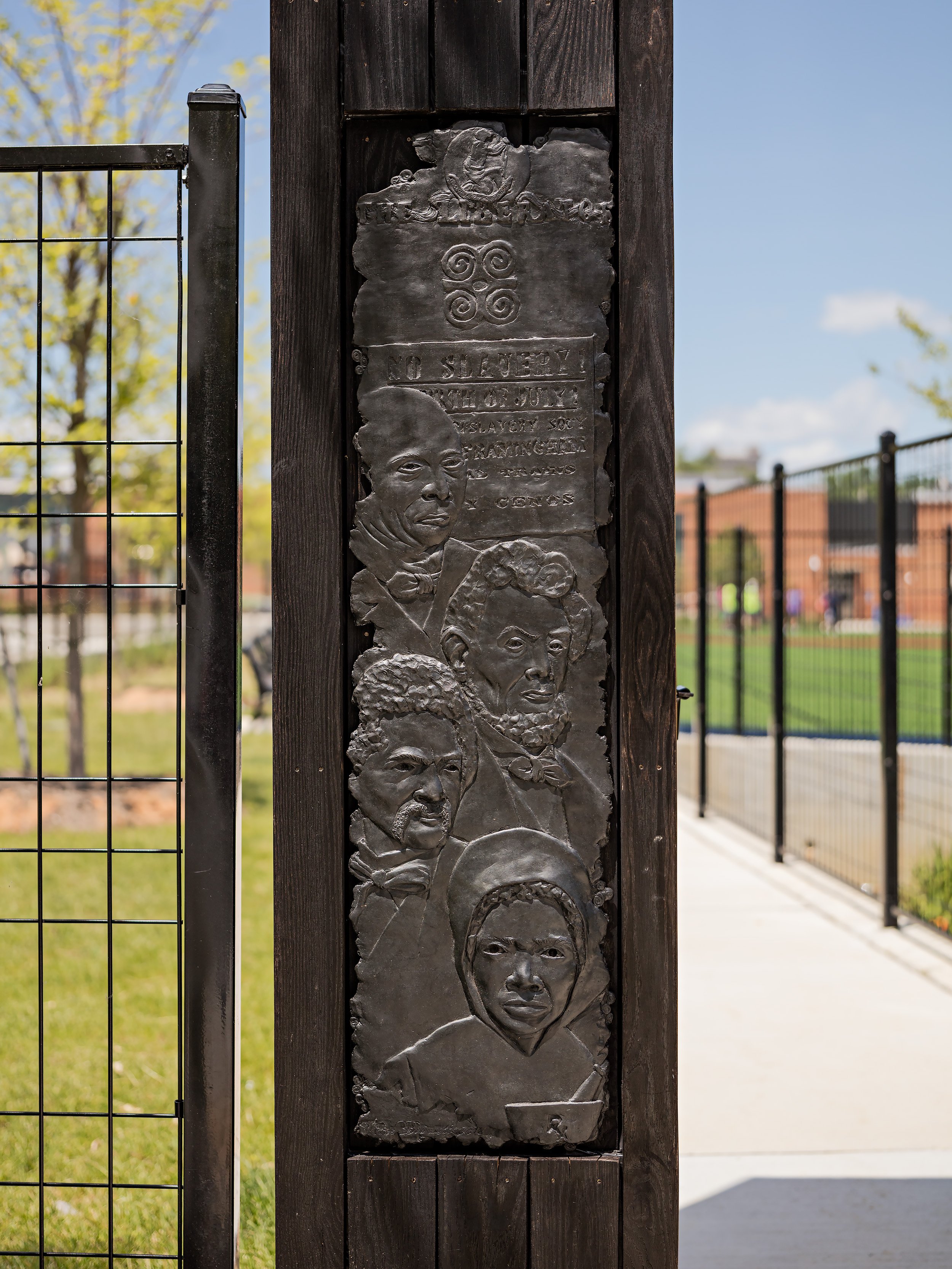 Intended to chronicle the history of the contraband camp, and situated as a passage for the school and park’s patrons to walk through, the memorial also evokes the idea of citizenship, and who is – and isn’t – deemed to belong within demarcated spaces. Created in the suffocating context of frequent ICE raids, and the children who have fallen victim to them, the Camp Barker Memorial prompts us think about the transitory state between spaces we’ve considered safe and unsafe. What does it mean when we depart and arrive between the two? And what does it mean when children are caught in these merciless policies? With side wings inviting children to interact with it, the memorial provides a bold visual statement reflecting the current state of affairs of immigrating between borders.

Given the current political and social climate, the memorial is a reminder of America’s troubling history that inextricably links race, the fragility of safety, and inequality. It is also a reminder that children, who are least equipped to defend themselves, are ultimately the most implicated group. A hauntingly jarring but necessary cultural project, the Camp Barker Memorial compels us to question who – and what – needs protecting.

In D.C., After Architecture’s Camp Barker Memorial remembers the unforgotten.