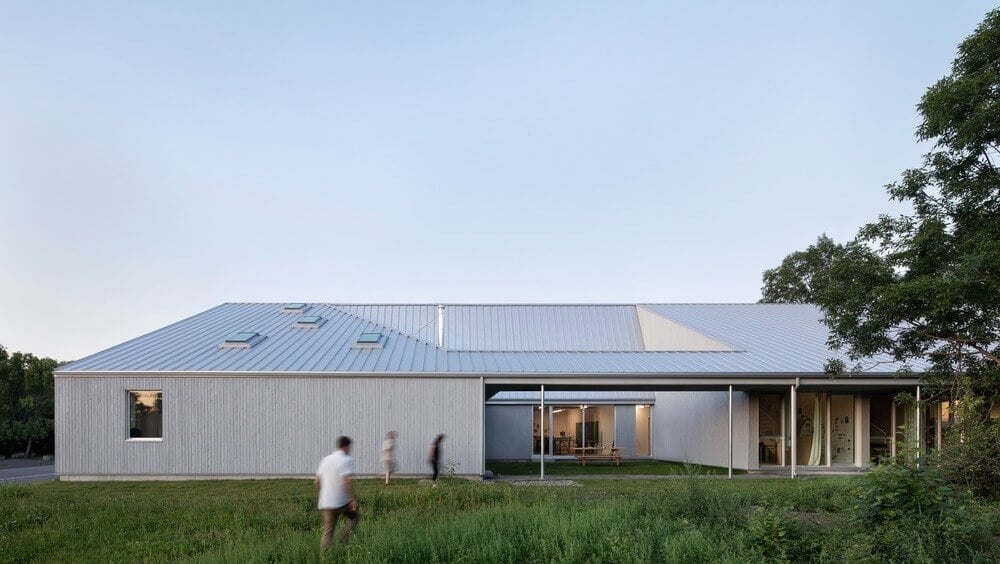 The village of Saint-Jean-Port-Joli is home to a vital new artistic hub – and a surprising architectural showpiece by Bourgeois / Lechasseur architectes.

With the 1781 Saint-Jean-Baptiste church at its heart – and its spire the highest peak – the Quebec village of Saint-Jean-Port-Joli unfolds in a modest array of small shops and detached homes. But this small town of 3,400 on the Saint Lawrence River also boasts a well-established arts scene – and it is for this community that a discreet new artists residence on the outskirts of town now serves as the permanent nexus.

Est-Nord-Est, as the centre is called, features a pitched roof that evokes the side of a barn. Designed by Québec City’s Bourgeois / Lechasseur architectes, the complex replaces a temporary arts hub that stood on the same site. A simple skeleton of locally harvested white-painted cedar is paired with a sheet metal roof to create a humble and contextually integrated presence. Inside, a similar aesthetic simplicity becomes a canvas for creation.

From a small door that faces the road, visitors enter an airy double-height space at the heart of the complex. By turns a lounge, an exhibition gallery, a community kitchen, and a meeting point, the space opens out to a small courtyard, and – up the showpiece spiral staircase – a sun-filled second-storey library, where a collection of live-work studios and workshops are clustered along a corridor at the back of the building.

Est-Nord-Est’s artists-in-residence program hosts five live-work spaces, as well as three shared workshops, which are dedicated to wood, metal and assembly. The artists who come through the space vary widely in discipline – ranging from dancers and performers to sculptors and craftspeople – so the suites are designed to be adapted to resident needs.

All five artist studios have an identical two-storey layout, with a bed on the mezzanine and a relatively open space below that can be easily reconfigured.

Maintaining the pared-down design language of the building’s exterior, a material palette of plywood, gypsum and polished concrete define the interiors. Throughout the complex, ample natural light lends a feeling of warmth to the unadorned rooms, where white walls are softened by simple plywood accents. Constructed with a budget of only $2.3 million, the 951-square-metre building is elevated by a thoughtful design that harnesses its simple elements – from natural light to plywood – to create a quietly powerful sense of place.

Far from Canada’s metropolitan centres, Est-Nord-Est creates a vital – and architecturally noteworthy – new hub for the arts. For a local arts community that began through a series of casual encounters and residences in the 1990s, the building functions as a regional anchor. And for Bourgeois / Lechasseur founders Olivier Bourgeois and Régis Lechasseur – both of whom grew up in relatively rural parts of Quebec – the project expresses a deft understanding of both the local landscape and its architecture. It’s a modest building, yet one designed with surprising panache. But how did it come to be?

In 2017, Bourgeois / Lechasseur’s contextually attuned design was chosen was the winner of an architectural competition. It’s a striking contrast to English Canada, where architectural competitions are almost entirely resigned to the past – even when it comes to major cultural hubs. Not here at least. Est-Nord-Est is a humble project – and a humble testament to a radically better way of doing things.

The village of Saint-Jean-Port-Joli is home to a vital new artistic hub – and a surprising architectural showpiece by Bourgeois / Lechasseur architectes.